Book value, swag, and other musings 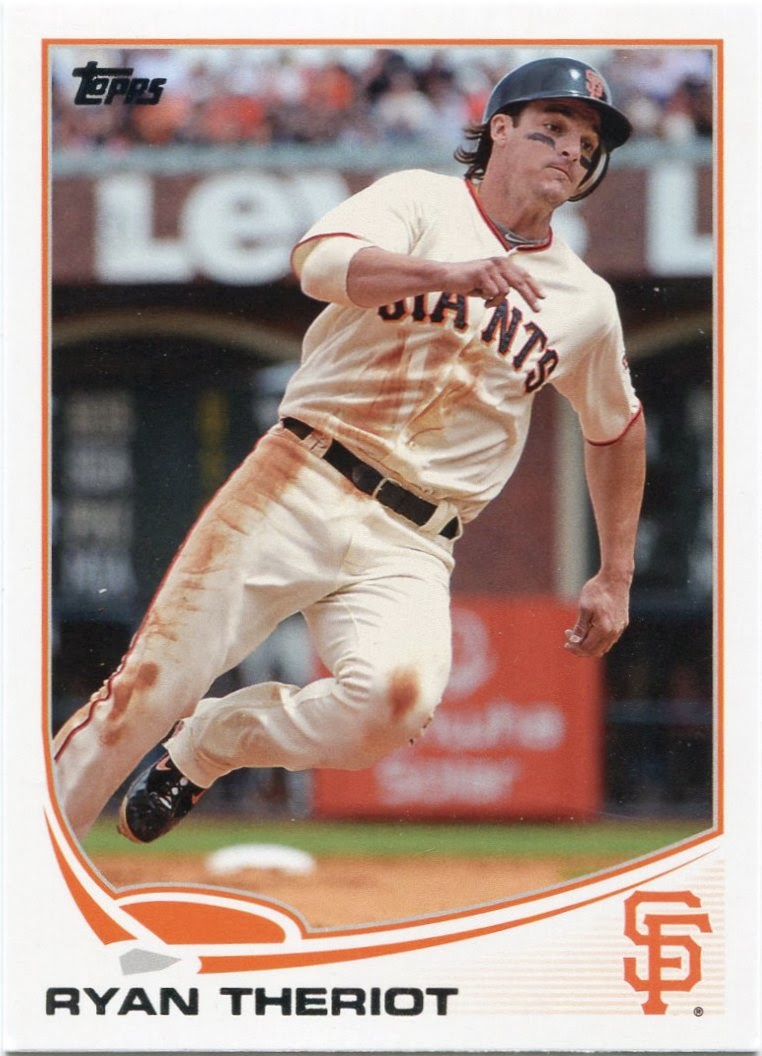 I talk about this hobby's terminology quite a bit on this blog.

It's something I've posted about a couple different times in the past. Things like "PWEs" and "refractors" may seem second nature to us collectors, but I bet a lot of other people would look at us funny if we were to bring them up in everyday conversation.

The blogosphere certainly gave me a few new terms to add to my collecting dictionary. I didn't know what the heck "bipping" was. And I definitely didn't know the ins and outs of building a "frankenset" before this blog.

In the two-plus years I've been here, I'm proud to see a few of my self-made terms pop up in other people's writings here and there. I've noted a few references to "zero-year" cards outside of my blog.

The same goes for "sunsets". Longtime favorite Ryan Theriot retired last week, so his 2013 Topps issue will go down as his "sunset" card. And quite a nice one, at that.

One reason I love our terminology is that it sets us apart from other hobbies. There aren't any "rookies" in coin collecting. (I don't think.)

There are a few terms I could do without, as a matter of fact. 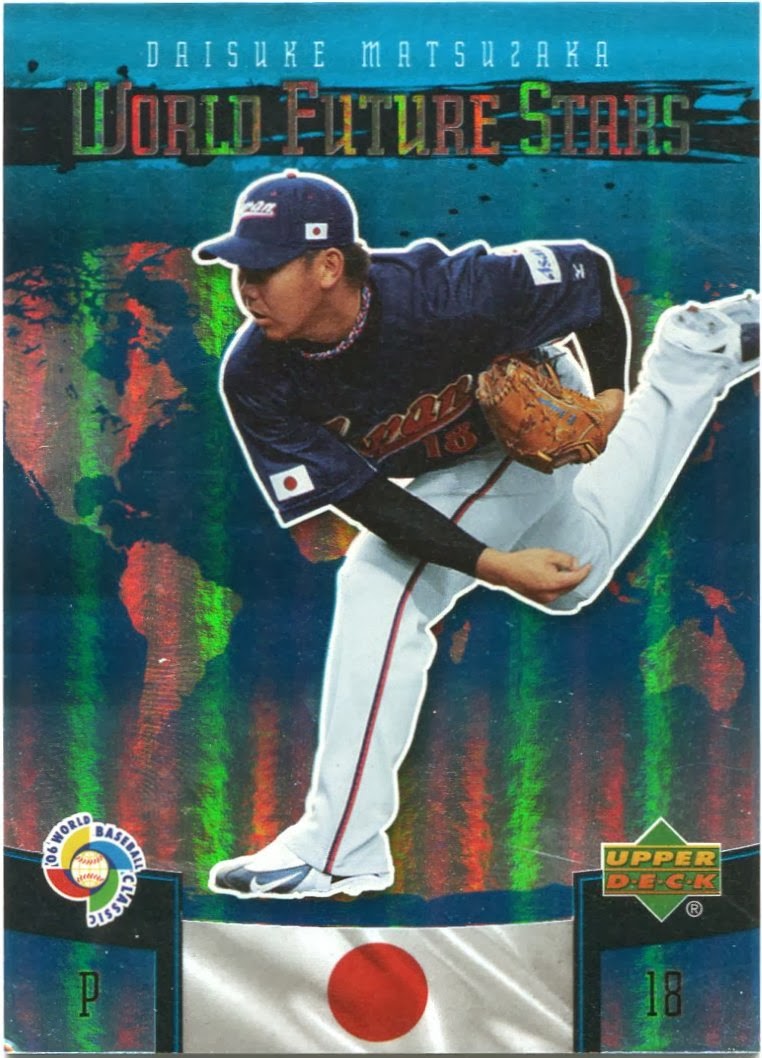 "Sick" -- adjective: A card that is just too awesome for the word "awesome". Usually relegated to high-dollar material.

Using the word "sick" in any manner should not be a good thing.

To some people in the hobby, though, it is. I'm not exactly sure when using the term "sick" started to intertwine with a good baseball card.

I do know, however, that I've heard it on quite a few occasions at shows, namely when a bro has some "sick" Derek Jeter autograph for sale or something.

I'm not sure if I own anything that could be considered "sick". I'd guess that this UD Future Stars Dice-K insert walked the "sick" line when the hurler broke into the bigs.

Is it "sick" here in 2014? Thanks to Dice-K's flameout, probably not. I found it in a flea market quarter box last year, interestingly enough. (Funny that I should post it on the same day Mr. Tanaka agrees to a huge contract with the Yankees.)

Can we move on now?

I'm getting sick saying the word "sick" so often. 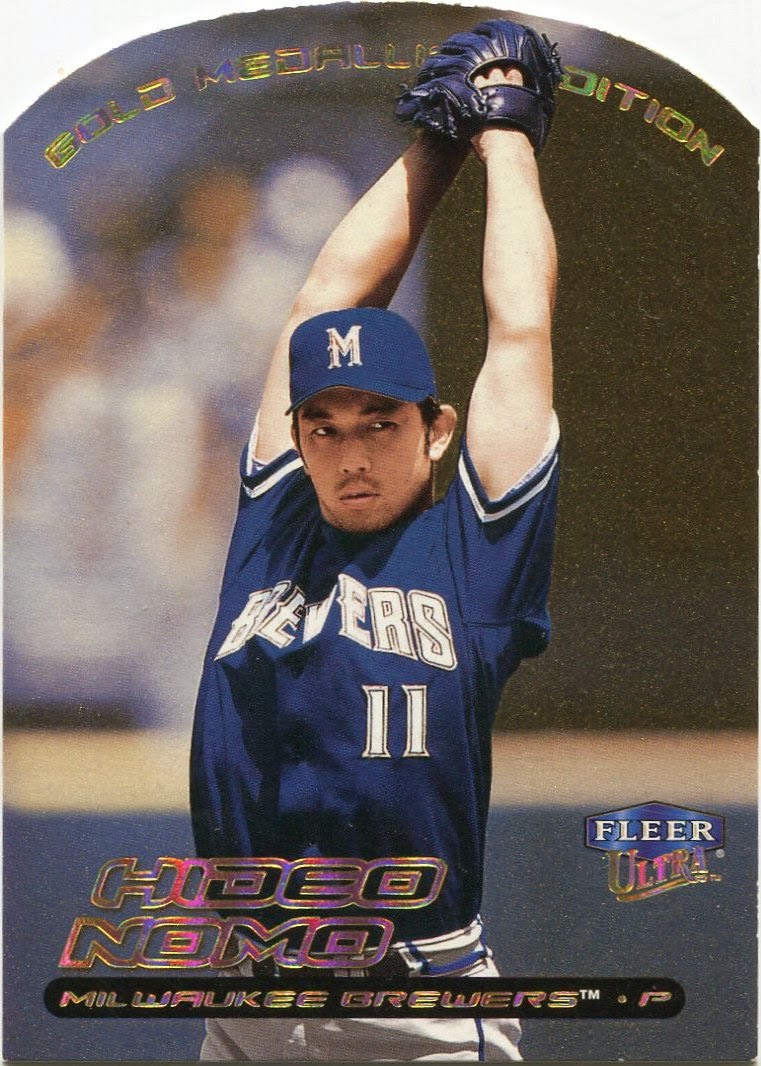 Ex. Nick eagerly waited for his contest swag to come in the mail.

Where do I start?

Well, it's short for "swagger". I know that much. Like "sick", though, I have no idea when the term started to be used in relation to baseball cards. But I hear people allude to contest "swag" all the time. I've never referred to certain finds as dime box "swag" or Hideo Nomo "swag".

I should note that "swag" is starting to pop up in everyday talk. People my age drop it into sentences quite often. It's starting to annoy me as much as the "hashtag" thing. (Don't even get me started on that.)

I guess I'm just not a swag-tastic type of person. 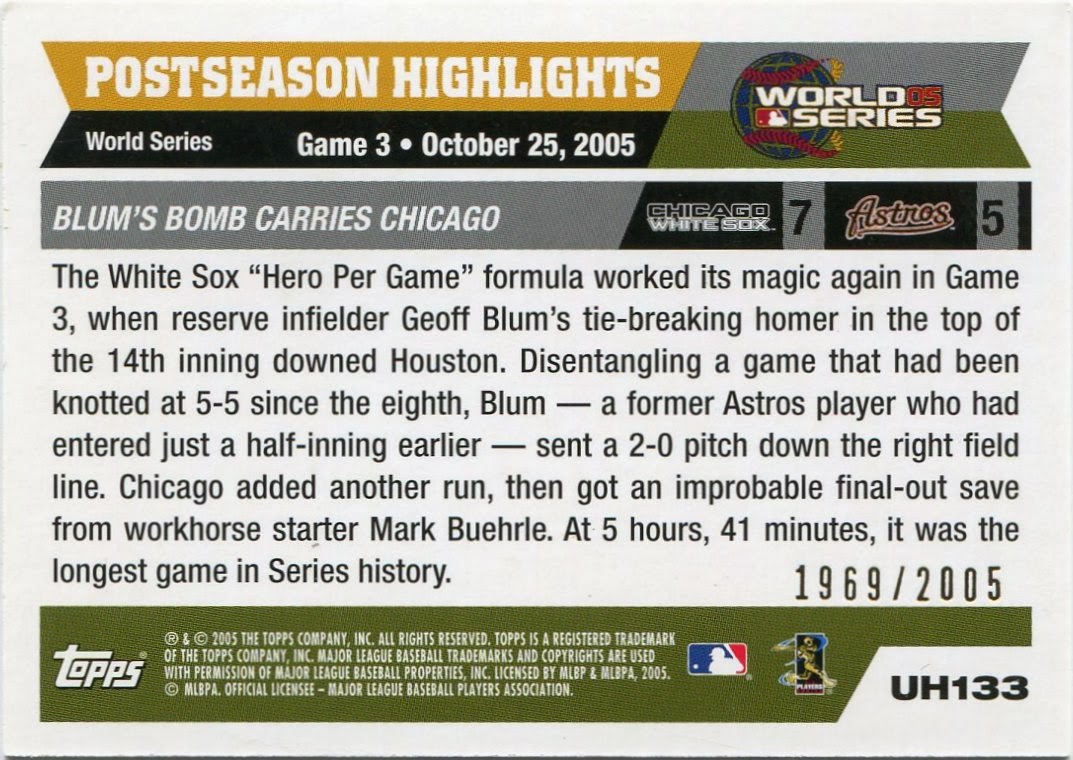 This is something a few other bloggers have already talked about.

I buy singles on Ebay about once every blue moon, so maybe I'm not the most qualified person to discuss the matter. But I do find it strange that people will fork over a few extra bucks for a card numbered to a guy's jersey number. (Like a Vlad Guerrero card numbered 0027/2000.)

Besides, when you really stop and think about it, isn't every card an Ebay 1/1? 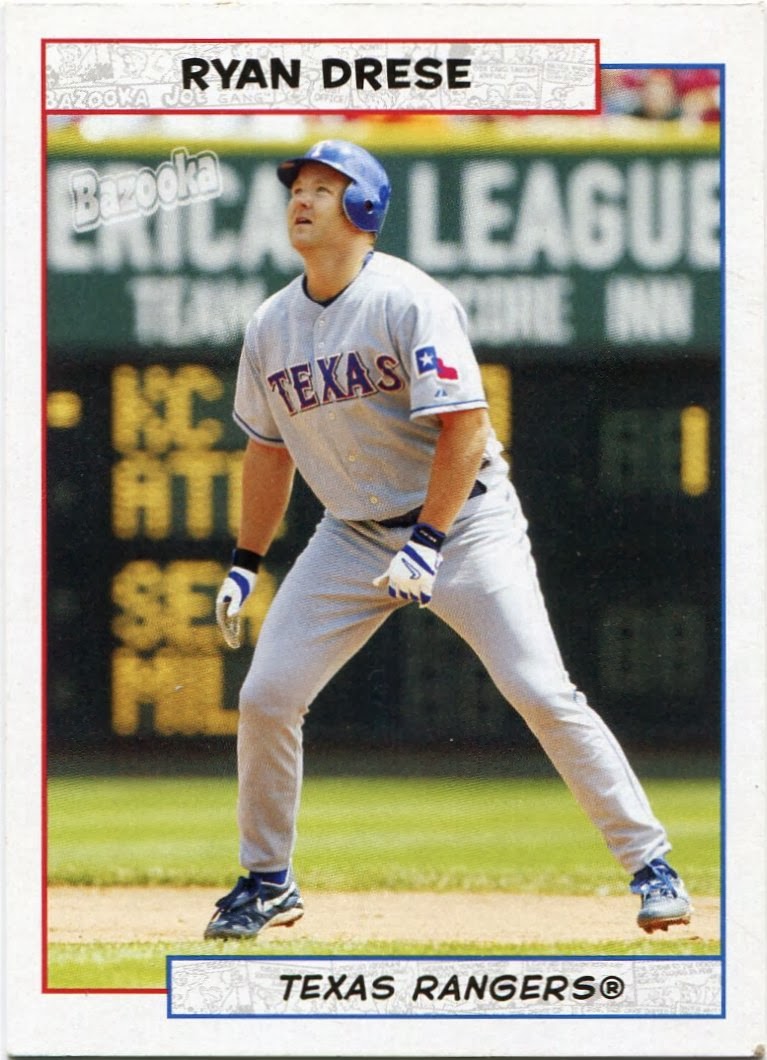 "Book value" -- adjective: The worth of a card according to the almighty Beckett.

I've gone on and on about this in the past, so I'll keep it brief here.

This Ryan Drese is one of my favorite "pitcher on the basepaths" cards. It's especially neat because Drese was a Ranger at the time, an American League club. Even with lack of experience at the plate, he somehow managed to find his way to second base.

Not only that, but this was one of the first cards I pulled when I started to get back into baseball cards around 2005. A friend and I used to bust pack after pack of Bazooka during our Target runs. It's had a secure spot in my Rangers binder ever since.

But what does Beckett say Mr. Drese is worth?

Is it worth more than that to me?

You better believe it. 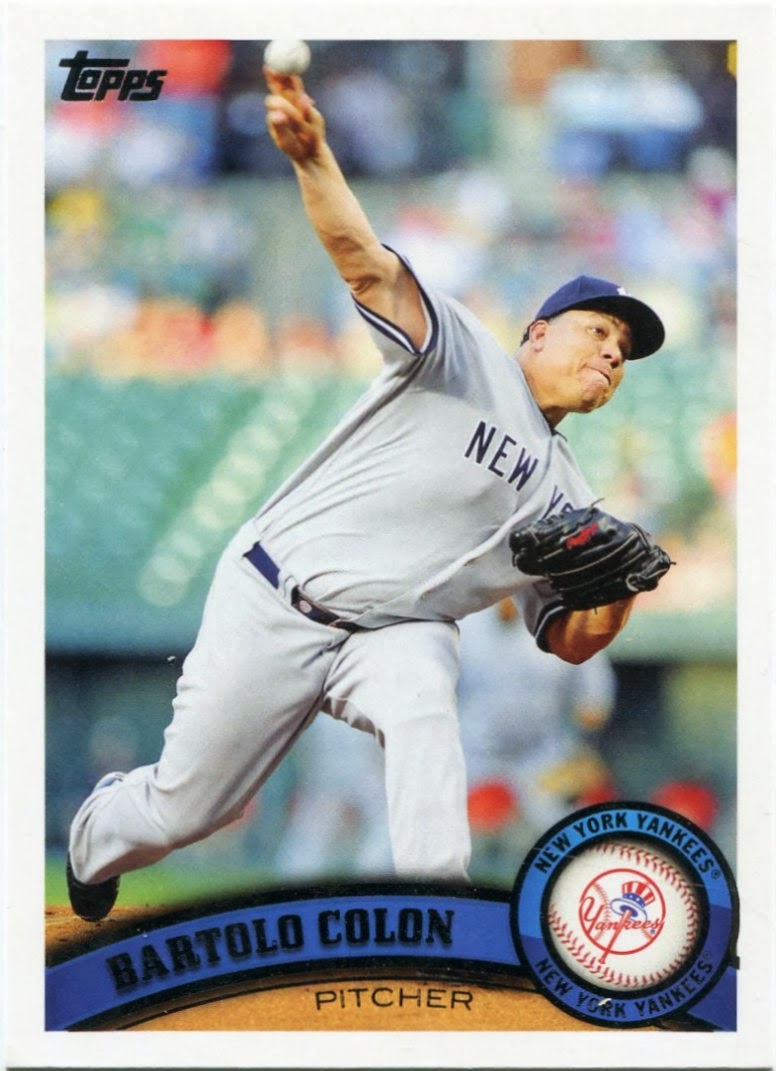 "Hit" -- noun: A good pull from a pack or a box. Usually a jersey or autograph card.

Ex. Nick's big hit from his box of 2012 Topps Update was a Jordan Pacheco autograph.

I'm not against the word "hit" at all. If your idea of a nice pull is a jersey or autograph card, I have no problem with that.

The fact that "hit" seems to only be used towards jerseys and/or autographs is what kind of rubs me the wrong way.

I consider any card I need a hit.

When I opened my box of 2011 Topps Update, my big hit wasn't the jersey card I pulled. (I can't even remember who it was.)

No, my biggest hits came from the base checklist. Namely this Bartolo Colon card, the only one he'd ever have during his forgotten tenure with the Yankees.

An eBay 1/1 is basically how you describe it, not just for serial numbering - but listing any random card on the auction site to get attention with a made-up criteria as a gimmick.

Replace "hit" with "mojo," and your list is perfect.

I, too, see folks using the word 'swag' and it makes me cringe. I remember when the word 'pimp' was all the rage. I'm so glad it might be dying out because it truly is a crappy word to use to describe anything. Also, mojo is used way too often, like Matt said above.

"Sick" gets used a lot in record collecting too,and I hate it as much as you do,pal!

My geocaching addiction makes me use swag in a completely different manner. There, swag is used to describe the items left for trade in the geocache. I often drop off a sleeve or two, each with 6-8 cards in each, for trade. Occasionally, I'll even pick up some cards there. That's why I prefer to use goodies to describe a card show/COMC haul.

I trade with many people, and have for nearly 20 years, and a hit is any card that you have on your want/need list period. I will still call a relic or auto a hit, but what is more important to me are cards I specifically want. I used the "sic" term once or twice, I just didn't like it, I'd rather use awesome.

"Sick" is a term that is way overused in the poker world.

I am sick of hearing sick (or sic).

I had never heard swag being used for trading cards now I have.

I too get rubbed the wrong way with using "hit" only for autos or jerseys (GU or EU or a huge patch/swatch whatever I don't like the concept of but won't go into that here). Someone mentioned MOJO in relation to being just a hit, but not necessarily MOJO could also be getting a base card of your team. It upsets me that many collectors only hunt for "hits" when opening packs. That and the people who call themselves collectors but just open up packs and sell everything from those packs not really collecting anything, just being a second-hand dealer.

Ebay 1/1 I always think of as what you said be it the jersey number, the card #d 1/x or last/x

I dislike "hit" in every sense. Makes the hobby sound like we're playing video poker (Do you guys have those where you're from? They're depressing contraptions).

I've only ever used "eBay 1/1" jokingly or ironically, but I will admit I did recently buy a Griffey numbered 3/500 and paid about 50 cents more for it specifically because of the number.

"Book Value" is the biggest ruse in the industry, but I suspect changes may be coming in that area.

"Swag" has been around for years, and I take no issue with it though I prefer "schwag."

If I could find a way to use "bipping" in a sentence every day, I would. It's just a happy word.