A tale of two doubles 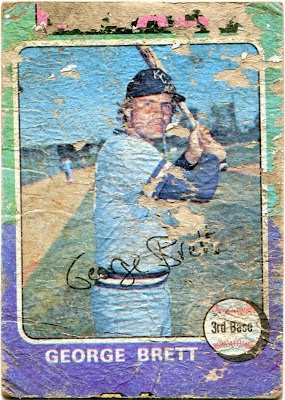 Mr. Brett here has become kind of an icon on this blog.

He made his debut only a couple weeks into my blogging tenure. I've featured him a number of times since.

In case you missed his previous appearances, this is what I've referred to as my "washer-used" 1975 Topps George Brett rookie card.

I found it in a 50-cent box about a month before I started this blog. At the time, I very nearly put it back. But I stuck with it, and I've been thankful for the decision ever since. It's the epitome of how I view my collection as a "shelter" for forgotten or simply unsightly cardboard.

As you can see, this one looks (and feels) like it went through the wash at one point. And, as you might be able to tell, it's also horribly miscut.

Nevertheless, it's one of the more iconic cards of the '70s. Besides, I'd never be able to afford a nice copy of Brett's rookie. 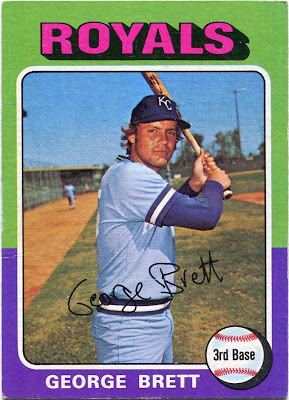 Take a guess at how much this set me back.

If you guessed nothing, you're correct.

You see, the uber-generous Wes over at the great blog "Jaybarkerfan's Junk" held a giveaway a little while ago. A number of hopefuls were selected at random to participate in a free card draft, complete with a ton of terrific prizes.

I was lucky enough to get in and have a fairly high draft pick. I think I had the #5 slot. At the time, my top priority was the very George Brett rookie you see above. I wasn't exactly optimistic about it hanging around until my turn in the draft, though.

Who am I kidding? That beauty is going to be gone by the fifth pick.

I set my sights on some of the other great prizes Wes had to offer. I was about ready to concede that I'd never own a non-washer-used Brett rookie.

Shockingly, though, none of the first four contestants picked it. I was floored. If anyone behind me was eyeing the Brett rookie, I apologize.

There was just no way I was going to pass up an opportunity like that.

Now, I don't normally allow doubles in my binders. It's a little policy of mine. And, despite their wildly different characteristics, these are technically doubles. But I made an exception this time around.

Both Bretts now have a sacred and happy home in my Royals binder.

I couldn't be happier. 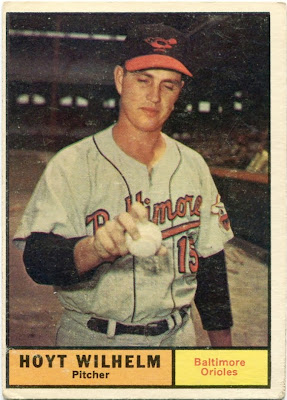 One of my best pickups of 2013 was definitely the 1961 Topps Hoyt Wilhelm you see above.

But, other than his '52 Topps rookie, this was the Hoyt I wanted most. It's a great shot of Wilhelm showing off his famous knuckleball grip for the Topps photographer.

For a while, I assumed I'd never own one.

But, at last November's show, my dad helped me spear the long-awaited Hoyt, deeming it an early Christmas present.

I was one happy camper at that point. I finally had a 1961 Topps Hoyt Wilhelm, a card I'd wanted for as long as I can remember.

I'd knocked out yet another of my cardboard dreams.

As I found out, though, the story wasn't over yet. 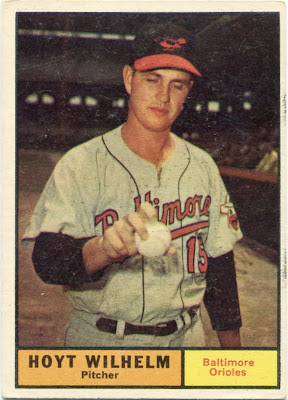 A few weeks ago, a package from my good buddy William over at the terrific blog "Foul Bunt" wound up on my doorstep.

William has a knack for tracking down awesome cards to send my way, so I was excited to see what he'd found for me this time around.

When I pulled out the contents of his latest batch, my jaw nearly hit the floor.

That is literally what I thought the instant I saw what William had sent. Another '61 Wilhelm!

It's easily one of the rarer Hoyt cards around. As I said, I'd wanted a copy for years before. I was beginning to think owning one would never become a reality.

Then, in the span of a couple of weeks, boom.

Williams said he'd read the card show post where I revealed my initial '61 Hoyt find just minutes after he sealed up this particular package.

Though I'd already tracked down a copy a couple weeks prior, it just goes to show how thoughtful and generous of a person William is. As I said, this card doesn't come cheap.

The fact that he put his own time, effort, and money to track one down for me is all that counts.

So, in the space of a couple weeks, I landed my second copies of a George Brett rookie and a rare Hoyt Wilhelm card. Unbelievable.

I've said this before and I'll say it again.

The hobby works in mysterious ways.
Posted by Nick at 5:23 PM

Wes & William are two class acts... and that washer used Brett rookie is awesome! You were very wise to pick that up for 50¢.

Speaking of class acts...! As you know, that's not the last time you'll be seeing Hoyt's (previously) elusive and (perpetually) awesome grip. Unbelievable trade package, Nick. My best attempt at an appropriate response heads your way this week. Thanks, Nick!

It's really nice to read about all of the super generous bloggers in these parts.