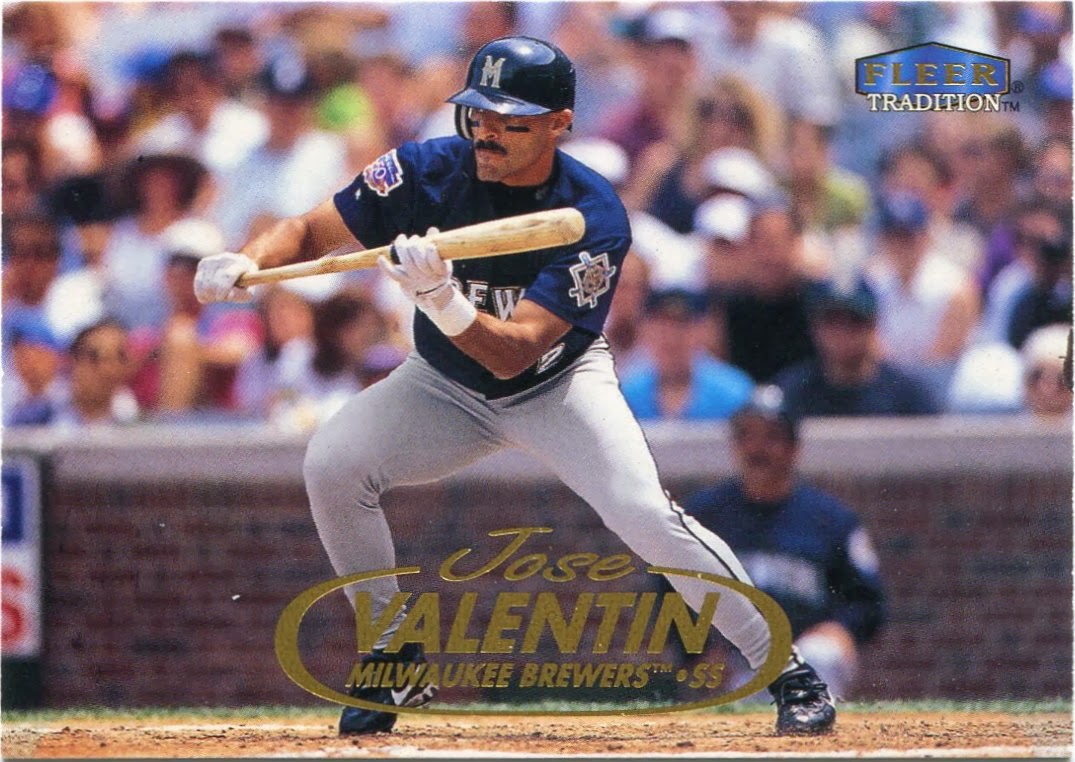 I've noticed a few new blogs popping up around here in the last few months.

I'm happy about that. I always seem to hear about how blogs were sprouting up left and right before I joined the blogosphere. Since I missed those first waves of new material, I'm glad to be a part of this one.

It always gives me great satisfaction to add a blog to my blogroll.

Perhaps the kindest and most generous person I've met out of all these new faces is John, over at the great new blog "Johnny's Trading Spot".

From what I've seen lately, he's continuing the great tradition of "just because" packages in the blogosphere. I know quite a few bloggers have already received stacks of great cardboard from him, myself included.

This time around, though, he decided to drop a full flat-rate box of goodies on me, continuing a "blogger box" tradition that seems to be returning around here. (In fact, John has since sent a second flat-rate box on my doorstep, which I'll be recapping in the future.)

John is a great source for late '90s cardboard, which is nice because it seems to be a lost era for so many collectors. Without his generosity, I don't think I would've ever realized the true greatness of sets like 1998 Fleer Tradition. He included a couple big stacks of them in this flat-rate box.

It's hard to resist a great bunting shot with the Wrigley bricks in the background. 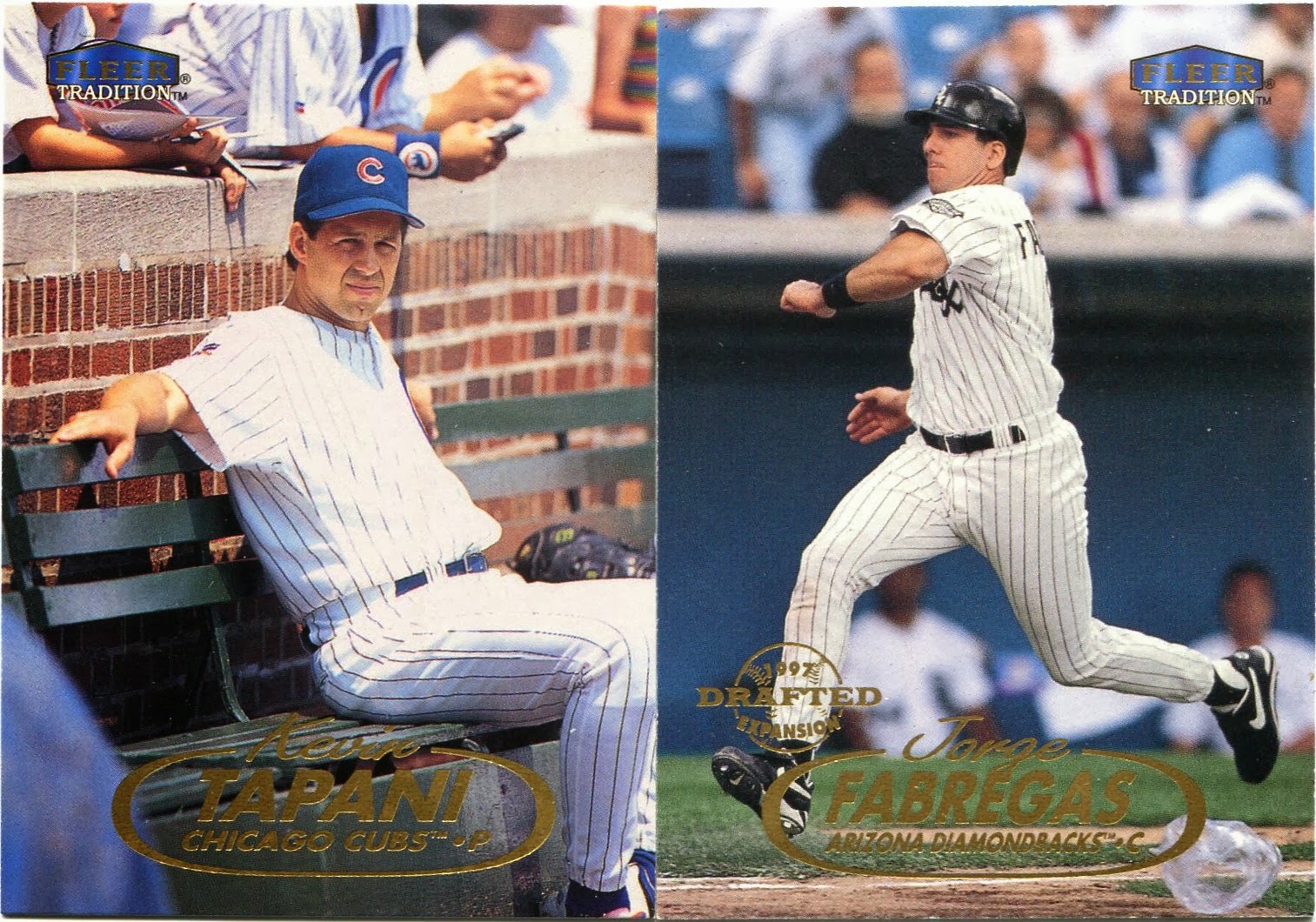 Speaking of which, there's an angle of Wrigley Field that doesn't get a ton of airplay on cardboard.

I say this about a lot of things, but I think bullpens are criminally underrepresented in our hobby.

At first, I was enthralled with the impending "play at the plate" on the Fabregas. That is, until I noticed the lurking plastic bag in the bottom right-hand corner.

That's a new one in the continuing saga of "Inanimate Objects on Cardboard". 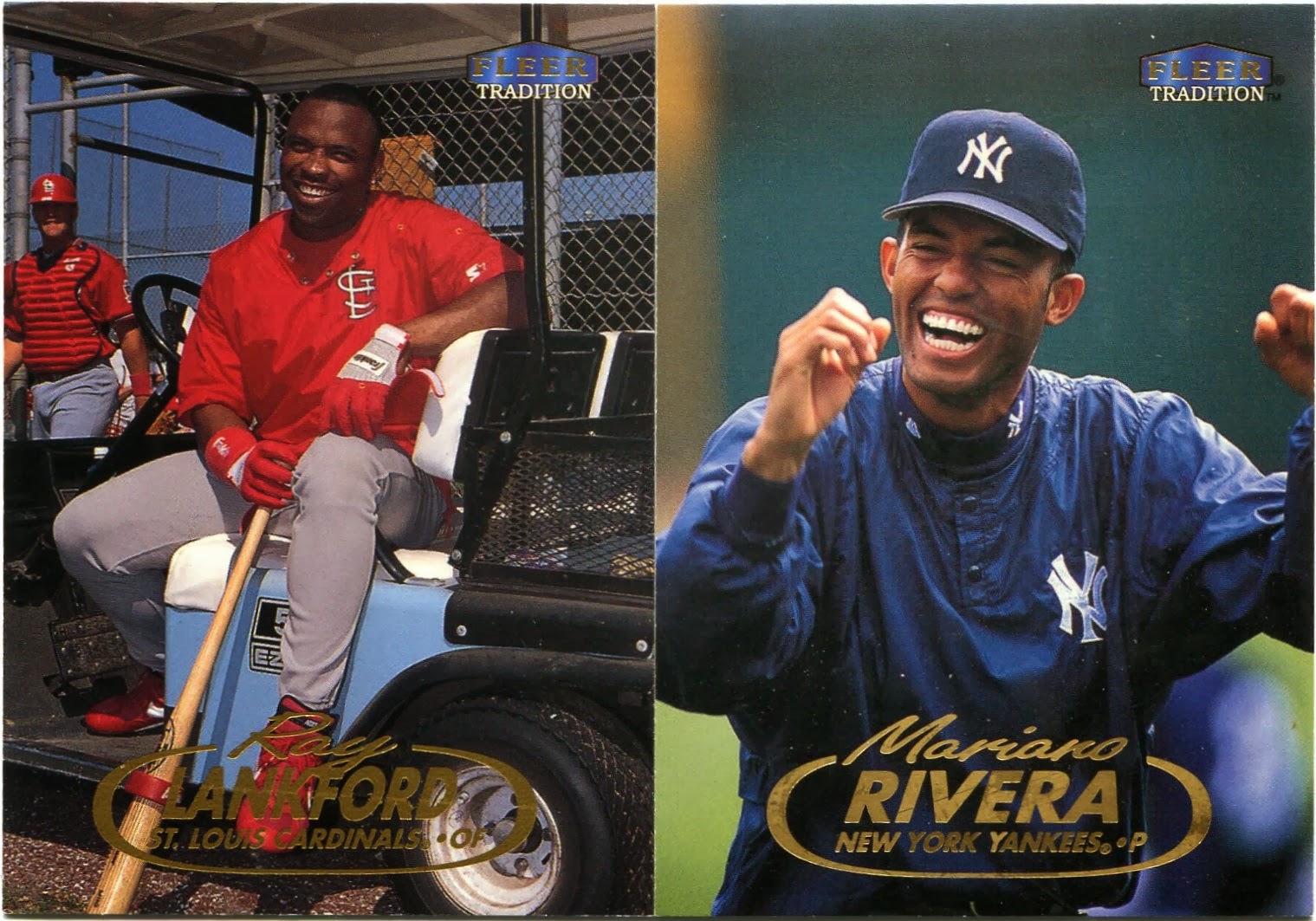 This edition of Fleer Tradition is packed with fun, candid shots.

It's odd seeing a guy like Mariano Rivera as an up-and-coming young face in the majors.

I'm so used to the stoic, professional, future-HOF closer he'd wind up becoming. 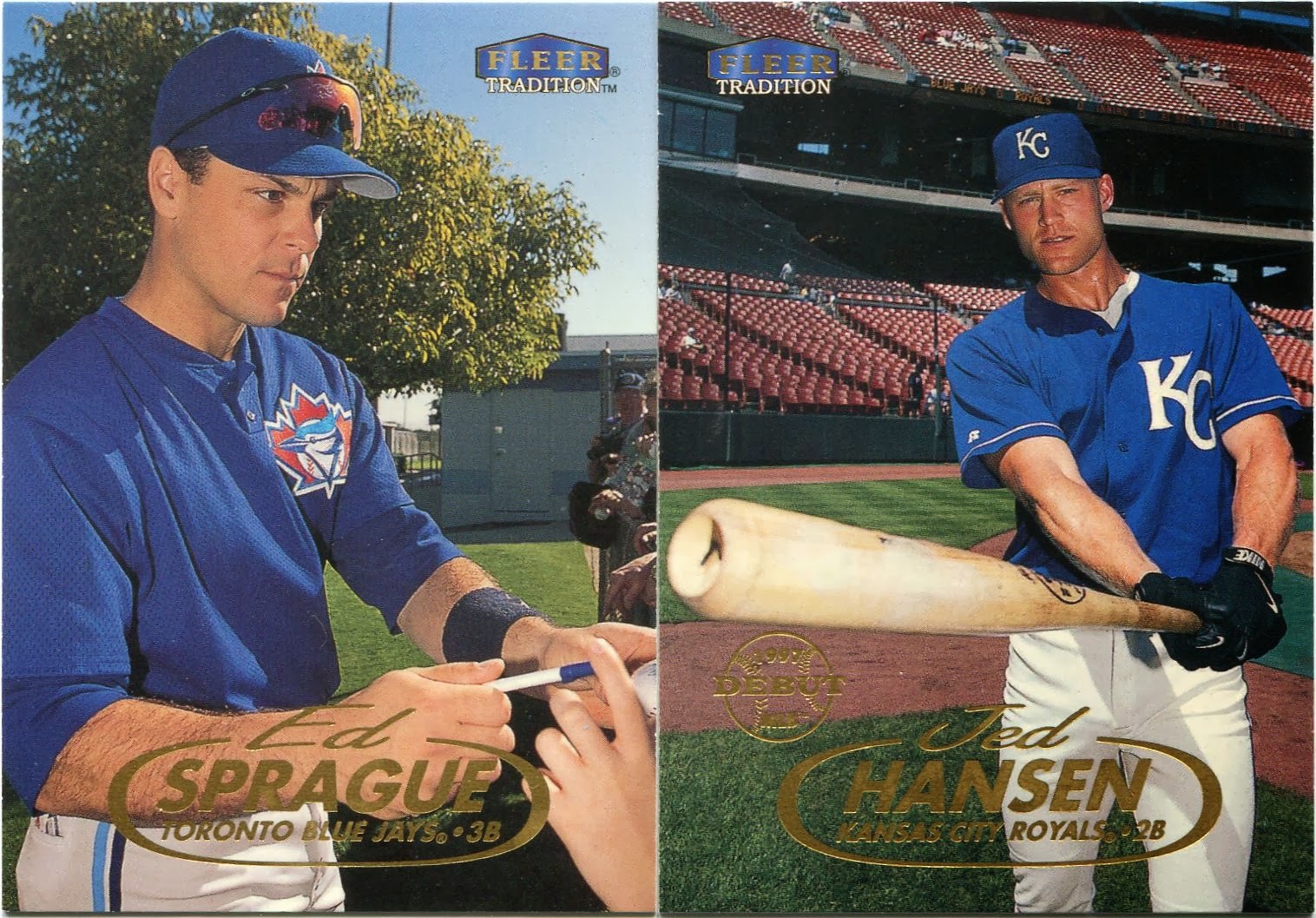 Thanks to John, I'm starting to realize that this checklist is an untapped well for mini-collections.

These are a couple fantastic additions to my "autograph" and "bat barrel" themes. 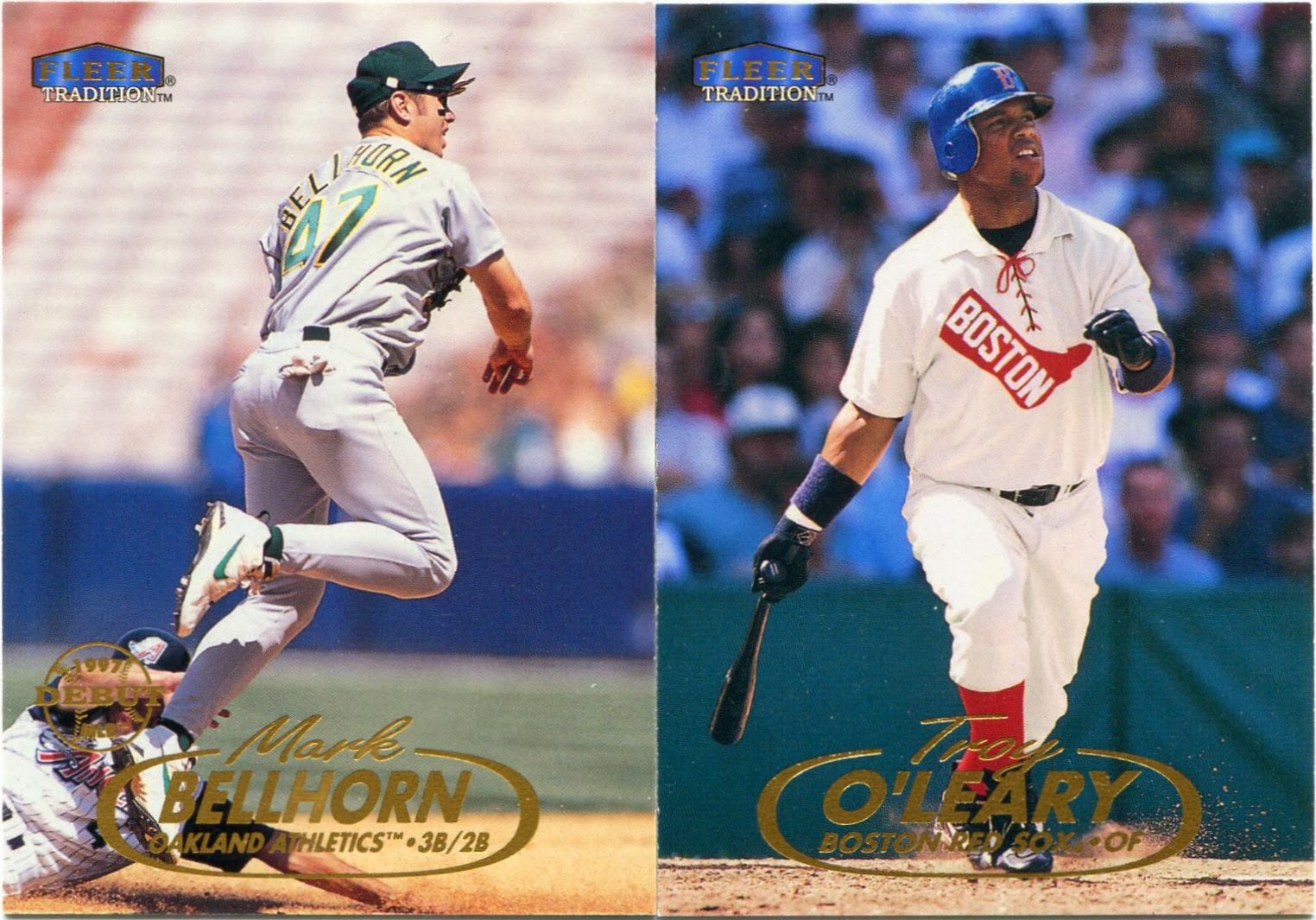 I'm particularly taken with the O'Leary because there just aren't many Red Sox throwbacks around. 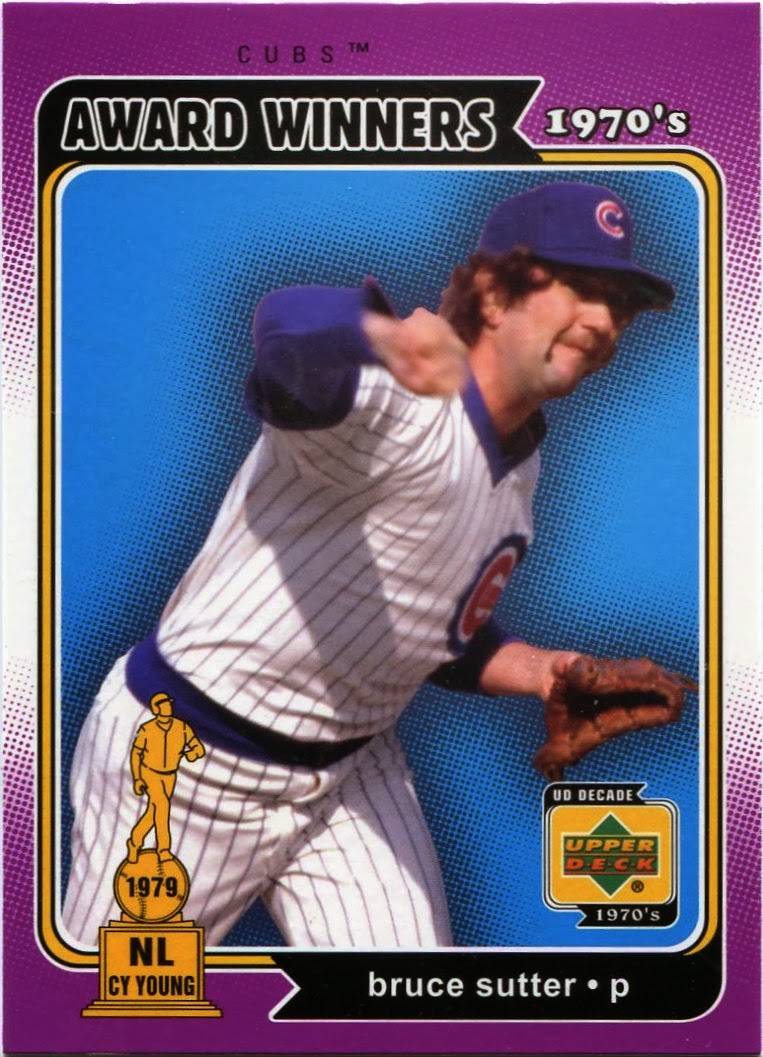 Although I've never labeled myself as a team collector, people seem to like sending me Cubs.

I certainly won't turn them down. I've been introduced to a ton of great new Cubbies during my fake tenure as a team collector. You can add this terrific "Award Winners" Bruce Sutter to that list.

I still maintain that 2001 UD Decade is one of the greatest sets ever made. 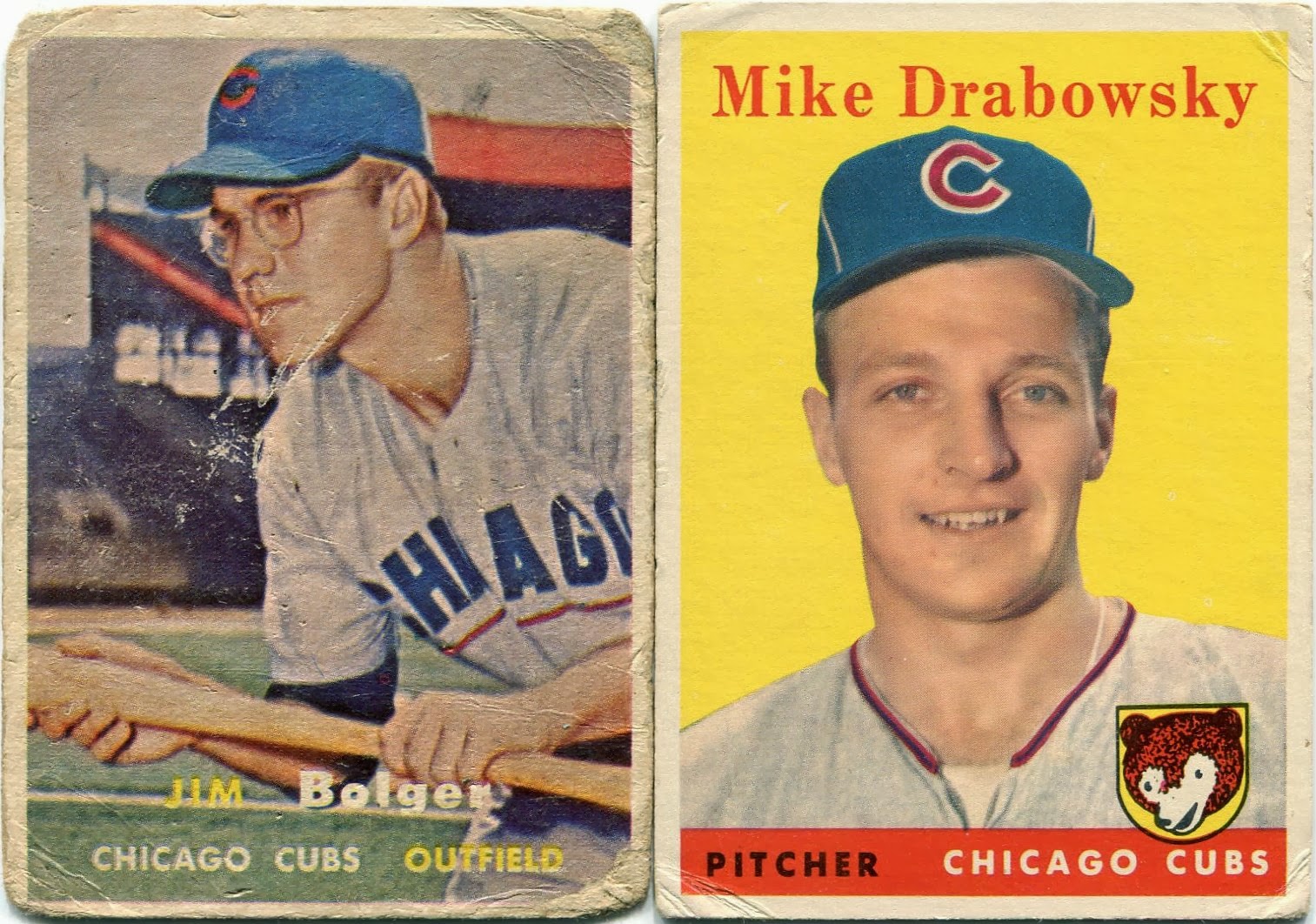 Boy, being a fake team collector can really pay dividends.

In an unprecedented move, John even threw in a few '50s Cubbies for me to enjoy. When you combine a "blogger box" and vintage, there's no telling what will happen.

Interestingly enough, I couldn't find a single piece of information on one Mike Drabowsky. I figured he was a relative of the longtime pitcher and prankster Moe Drabowsky.

Well, as it turns out, Topps screwed up in 1958. That is Moe Drabowsky, listed under the first name "Mike" for reasons unknown. It's a new piece for my error collection!

On top of that, Moe Drabowsky remains the only player in baseball history to be born in Poland. 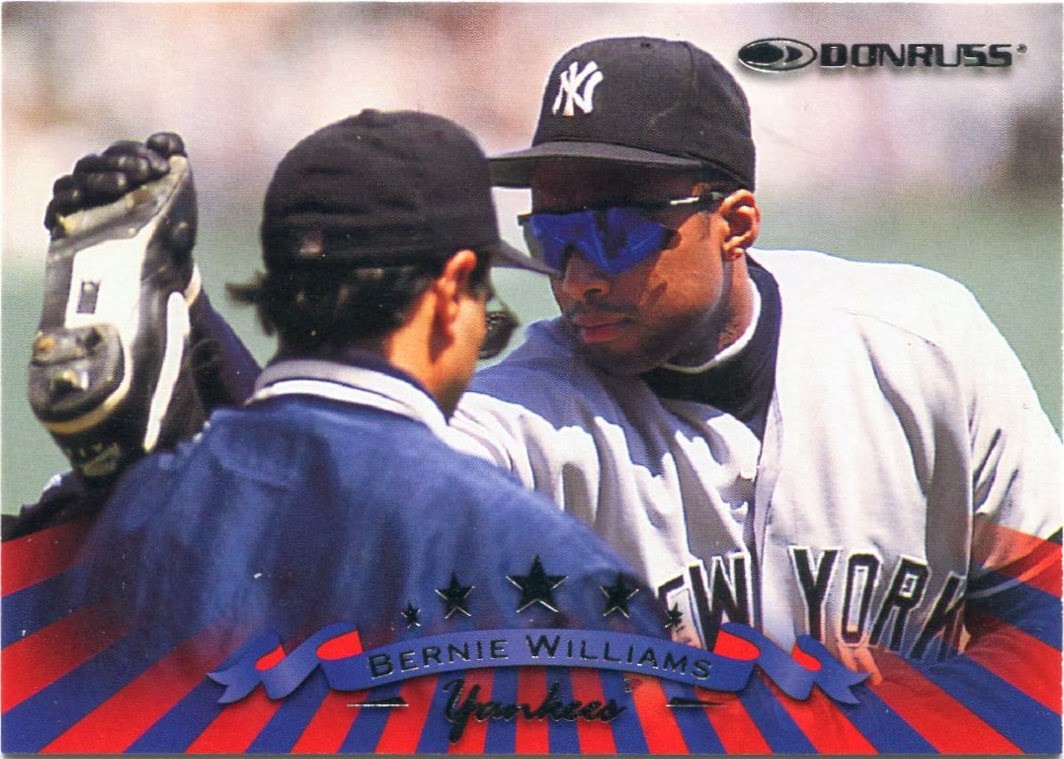 Fleer Tradition and Cubbies aside, though, John sent along a ton of random goodies for my binders as well.

Among the gets was this painfully awesome card of the great Bernie Williams.

Just looking at this one is making my legs hurt. 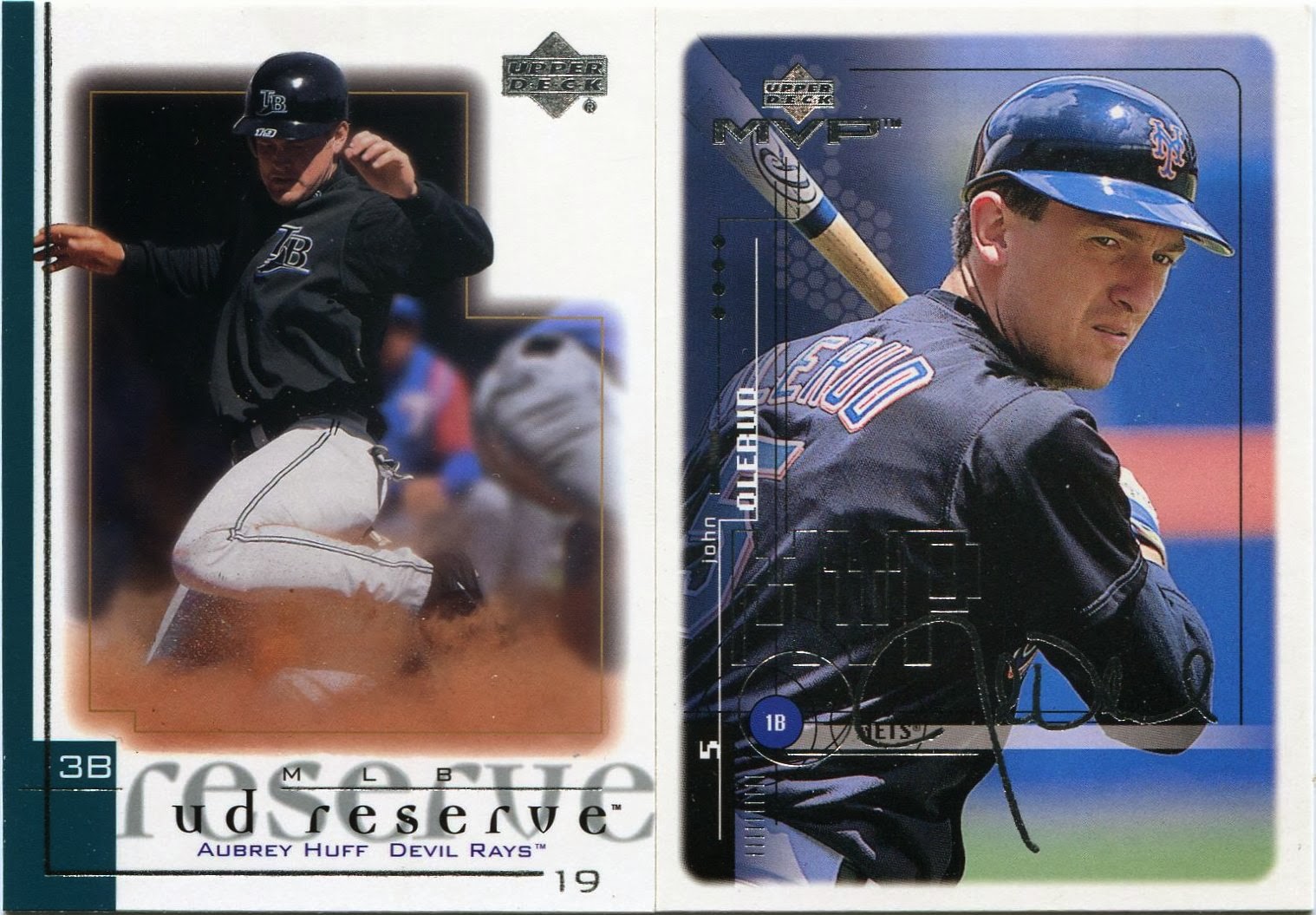 Also included were a few player collection hits from some long-lost brands. 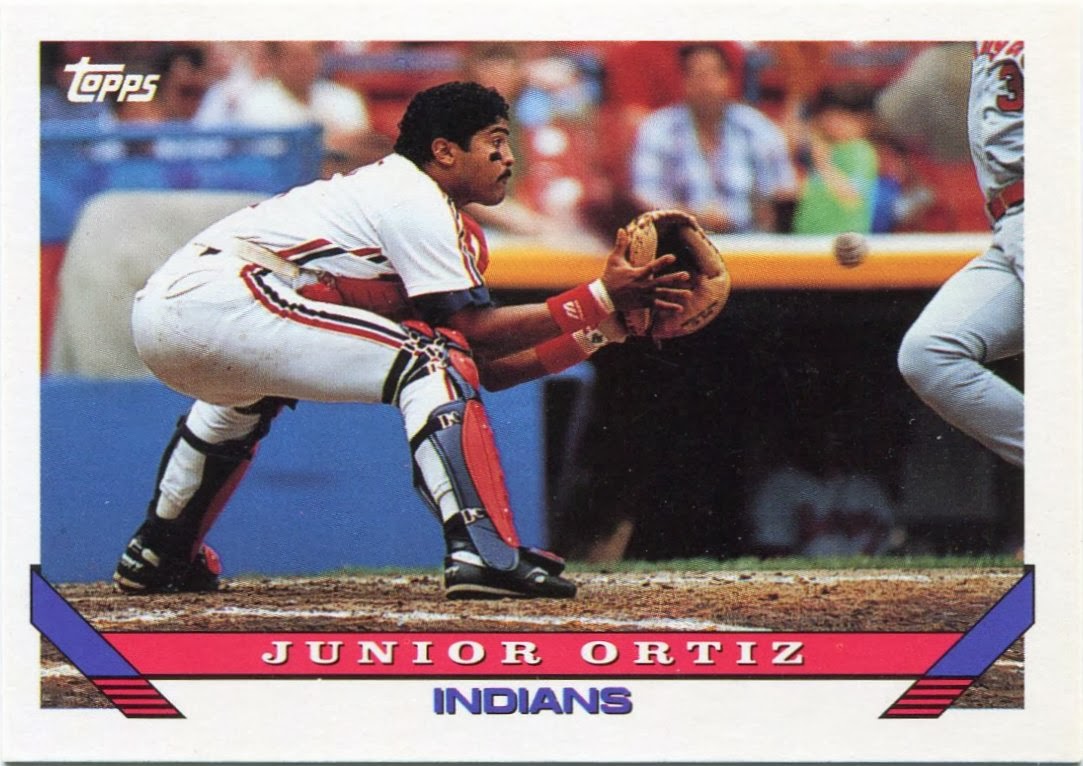 I now own the complete 1993 Topps Ortiz/Gaetti/Felix trifecta.

After receiving the first two in a past Lisita purchase, John sent the final piece to this rather interesting puzzle.

Junior Ortiz is seen here preparing for an impending play at the plate. The photo used for Gary Gaetti's card in 1993 (seen as the baserunner here) was snapped just a split-second after this one. He was out at the plate.

As if that weren't enough, Junior Felix is also shown sliding into home on his '93 Topps issue, thanks to a single on the very next play in the contest. He, unlike Gaetti, was safe at home.

I'm proud to finally have the complete trio in my collection. 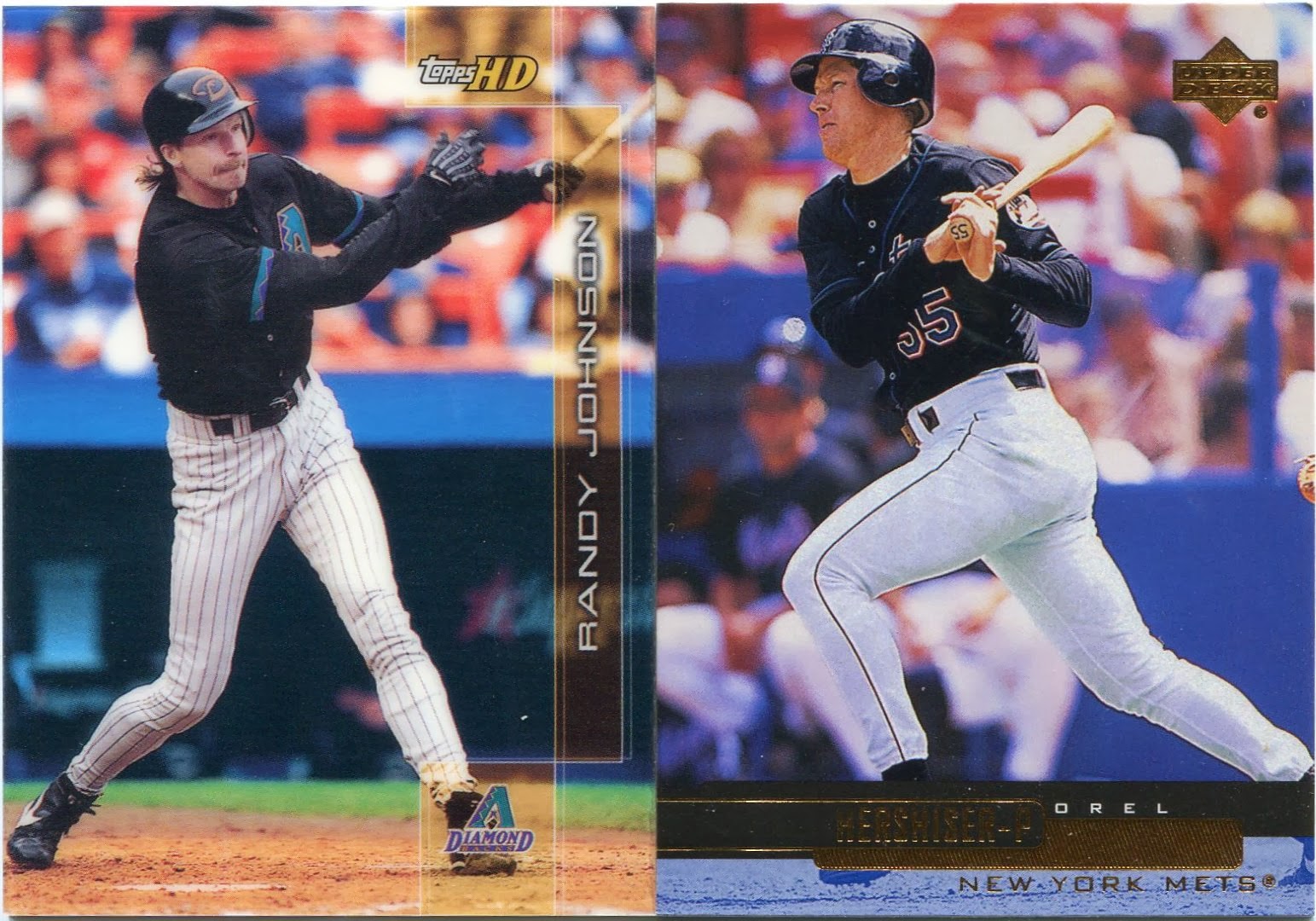 Here's a couple star-studded "pitchers at the plate" that took me by surprise.

I believe that's the third card I own of the "Big Unit" at the dish. The future HOFer was a .125 career hitter.

The Hershiser, meanwhile, is one of the better "sunset" pieces I've ever received. (He would pitch in 2000 with the Dodgers, but Topps was the only company to print a card of him that year.)

As I've mentioned a couple times before, I long assumed that there weren't any cards of him as a Met. That's the third one I've found in the last few months.

And I'm betting it won't be the last. 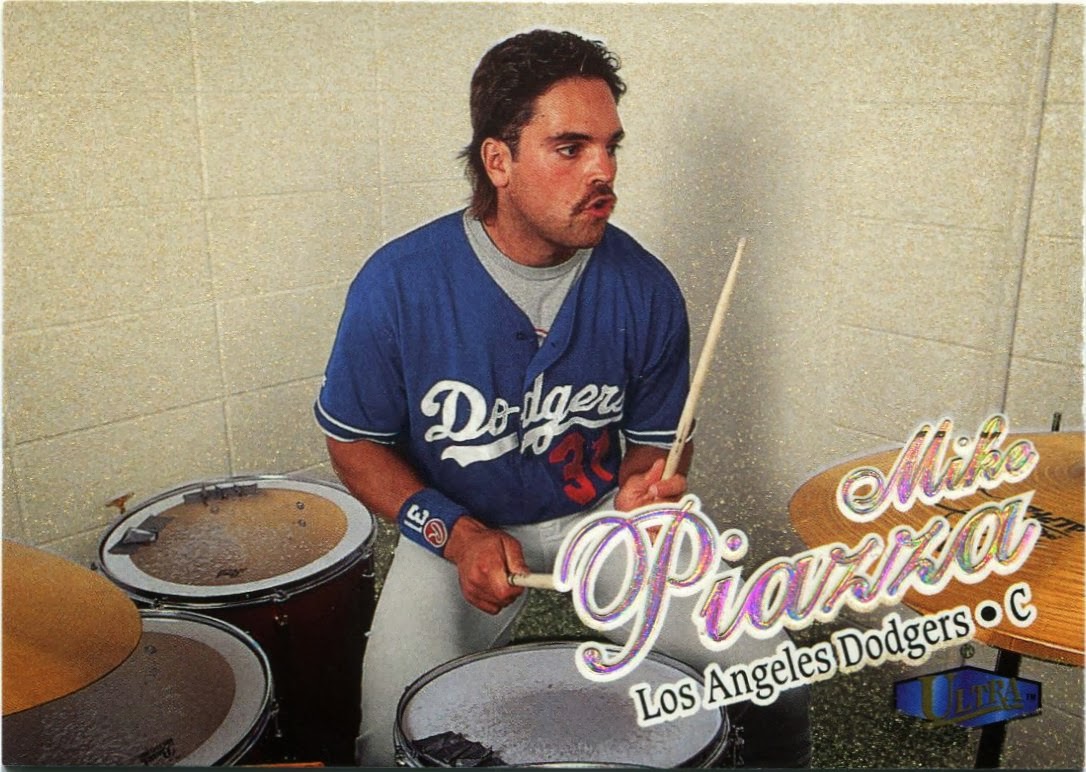 John closed things out with the Gold Medallion parallel of one of Mike Piazza's greatest cards.

Seeing as how he was a perpetual cardboard star throughout his career, that's saying something.

Maybe Piazza can jam with Randy Johnson in the band I've been putting together.

As the baseball season starts to bloom, I hope to see a bunch of new bloggers join our ranks this year.

If they're anywhere as great and generous as John is, we'll all be in for a real treat.
Posted by Nick at 4:33 PM

Yup, I've received a few envelopes from John, as well, and I'm amazed at the great stuff he's throwing around. Great guy, too.

Awe, you guys are making me blush, LOL.

Seriously though, Nick, wow, your just getting to that box. I'm ready to see the goodies from this last box sent. got a heck of another stack already sitting too.

I never noticed that about the Ortiz/Gaetti/Felix trifecta. I bet there are a lot more of them in the hobby, but how are we to tell? A snapshot of one plate appearance looks a lot like the next.