New year and a contest winner! 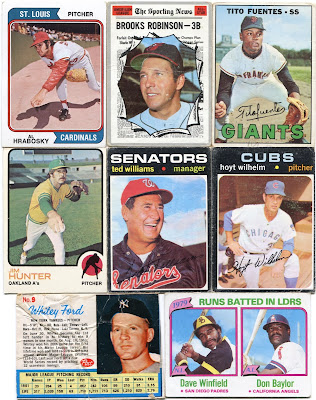 First off, I'd like to wish everyone out there a very happy 2014!

I hope the new year has great things in store for all of you.

I guess one of my unofficial goals for last year was to make at least a little progress on completing an 2013 Topps Adam Greenberg rainbow. I did pick up a variation in my most recent Just Commons order (which you'll see in the near future), but that was it.

In 2014, I'm not going for specifics. With the way my collection is set up, it's not really in the cards.

But enough about that. I know why you're really here.

You want to see the results of my 1,000th post contest, of course!

We ended up having 43 entries into this thing. The prize, again, will be an assortment of fun dime box pieces, cards of the victor's favorite players and/or teams, and a nice vintage lot which will include the eight cards you see above. (And many more.)

So, without further ado, the winner of this contest is... 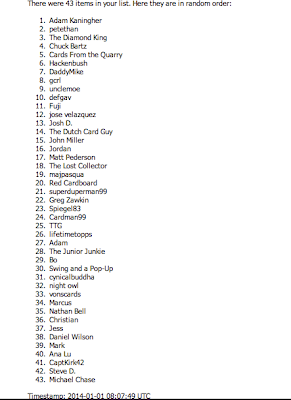 Adam, since you and I have traded before, I think I know what you collect. But I'll send another email just to be sure.

As for the rest of you, thank you for the congratulations and support you've given me over my first thousand posts. Also, I have a fairly big trip to the Post Office planned, so Adam won't be the only one getting cards from me in the coming weeks.

I have a lot of posts to catch up on (including a couple more countdowns), so be on the lookout for those in the next few days. I still have a whole bunch of trade packages to post as well.

Fantastic! That's a nice stack of vintage coming my way.

This act of generosity will not pass without proper acknowledgement!

I am finally starting a blog, and I'm calling it Infield Fly Rule.