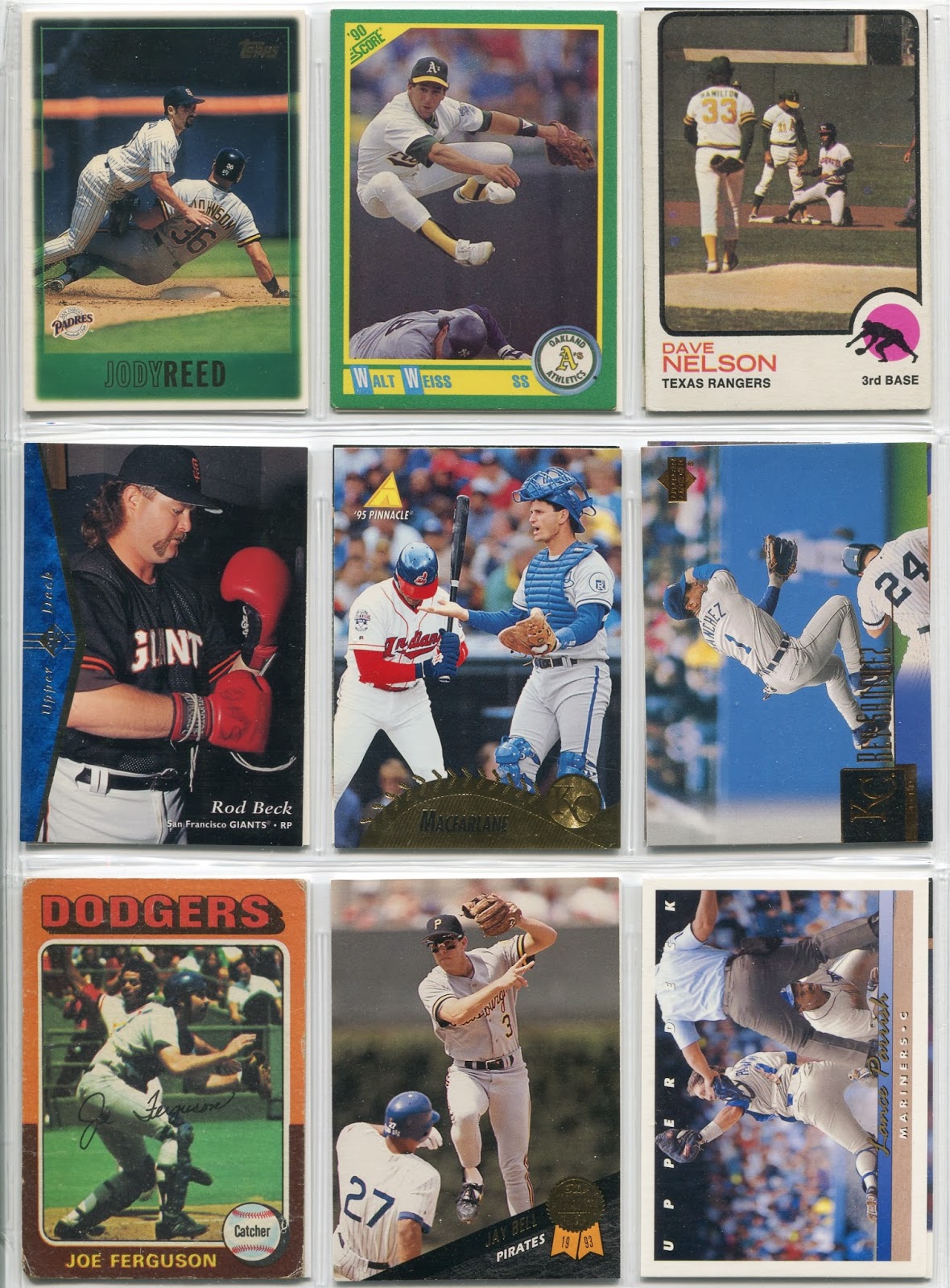 One of my resolutions towards the end of last year was to improve the frequency of these frankenset posts.

What started as a once-a-week theme has become more like a once-every-other-week series. This is the first frankenset post in nearly a month.

I'm hoping to do better with this theme here in 2014. What I've shown so far hasn't even scratched the surface of all the terrific cards in my frankenset.

With that in mind, let's take a look at another gloriously full nine-pocket page. 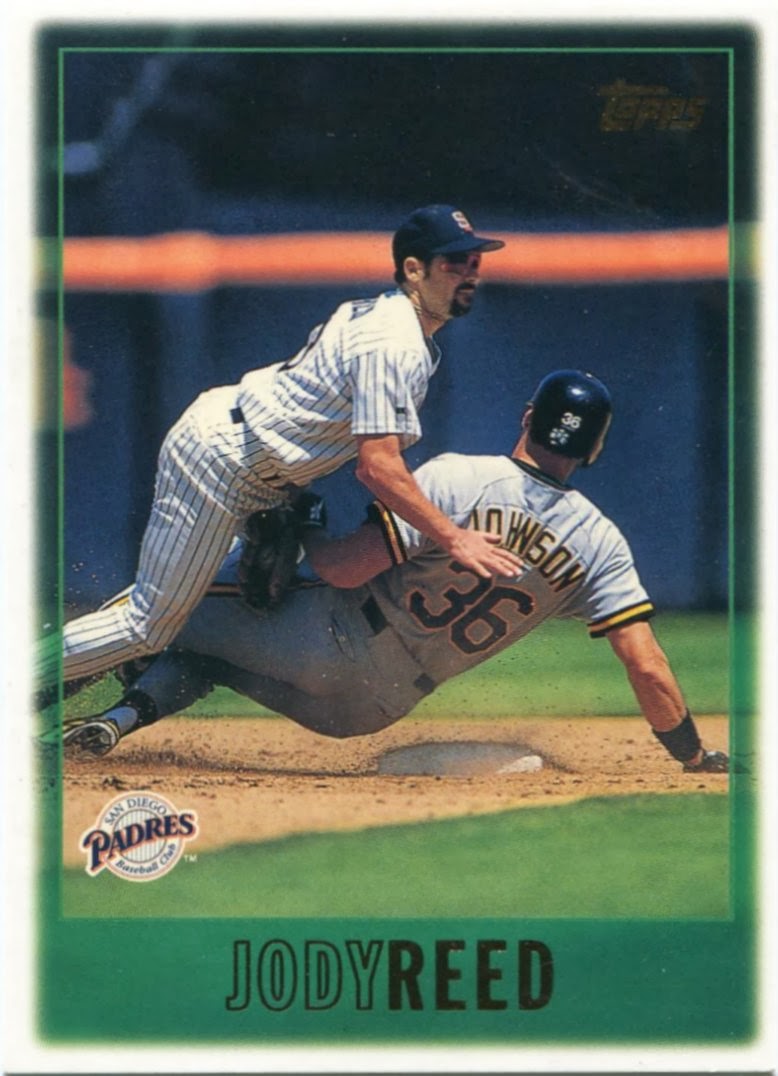 This is the first in a page filled with "double dips".

Mr. Reed here comes from 1997 Topps, one of my least favorite Flagship sets. Still, that doesn't take anything away from this terrific double play shot.

It's a beauty no matter which way you slice it. 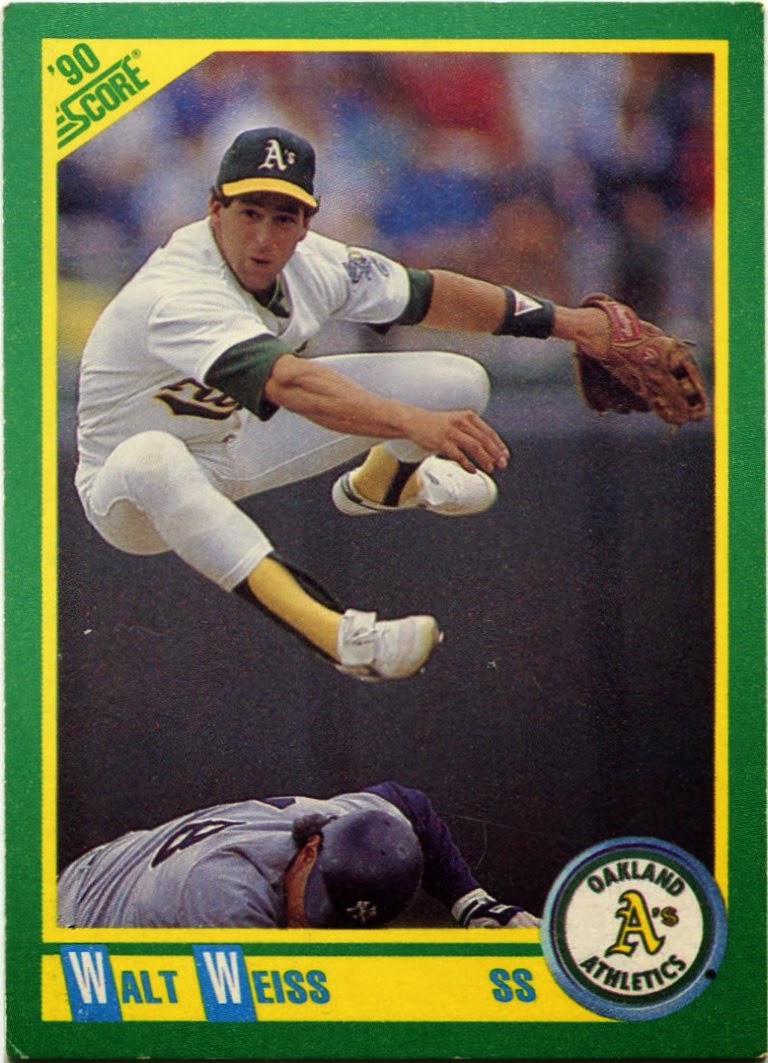 I'd have to go back and check, but there's a good chance Walt Weiss may own more slots in this frankenset than any other player.

Even though the guy was a fairly marginal infielder during his career, card companies sure seemed to like him. 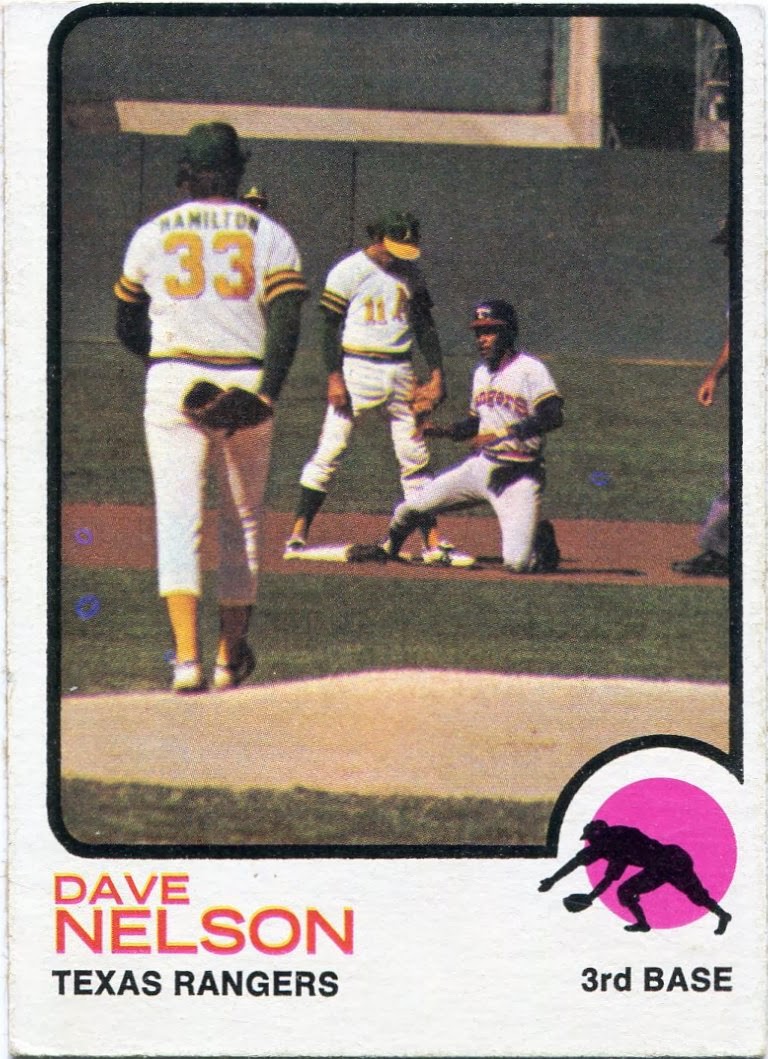 This is a prime example of what makes '73 Topps so memorable.

In one of the more unexplained phenomenons in cardboard history, Topps slipped a ton of unorthodox action photos into the 1973 checklist during an era where that sort of thing wasn't exactly commonplace.

There's quite a few examples of those quirky shots in my frankenset. Dave Nelson here is one of the lucky ones.

In what appears to be the aftermath of a stolen base attempt, the view we get to see is basically from the backstop. I can't think of another card off-hand that features an angle quite like this one.

Judging by the rather dejected look on that A's infielder, I'd guess Nelson was safe at second. 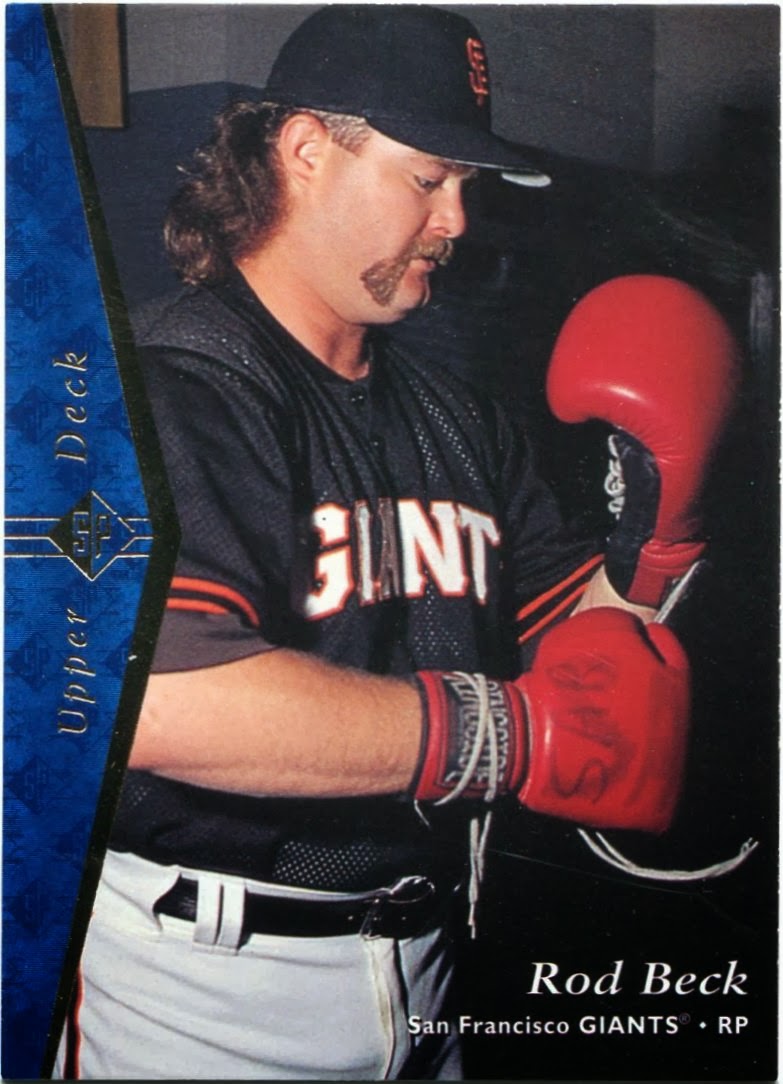 I think the late Rod Beck was preparing for the next time a hitter charged the mound on him.

Maybe it's just me, but I would never dream of taking a swing at someone with a mustache like that. 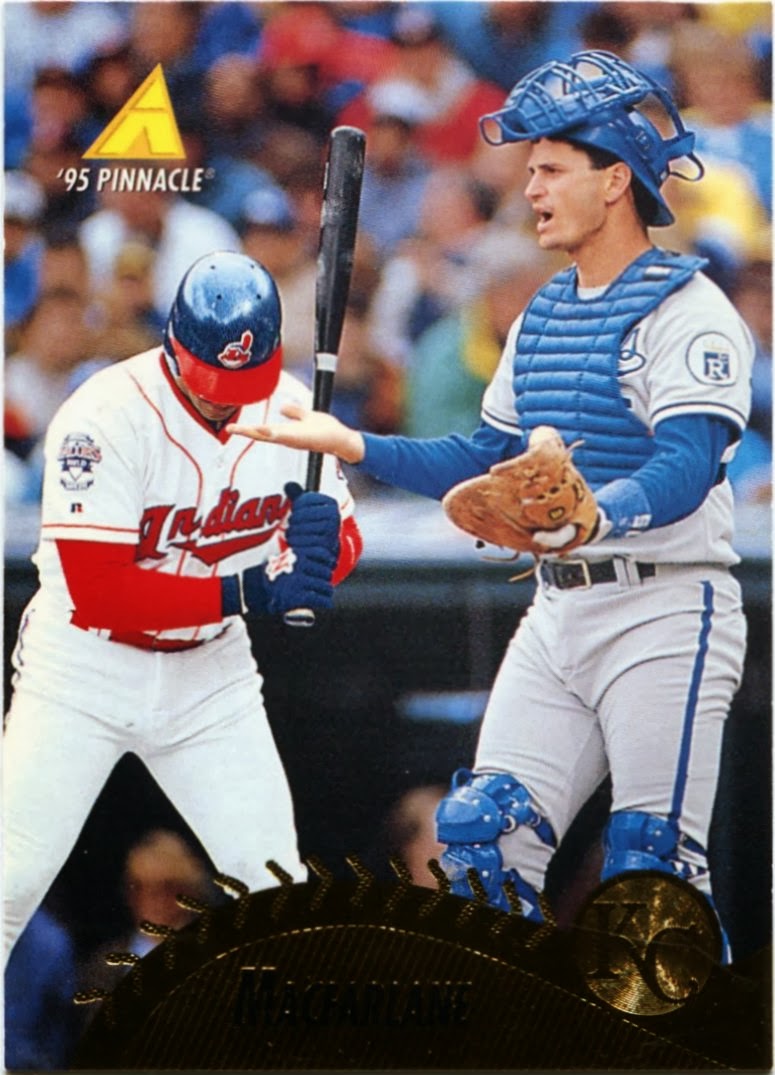 I nabbed this one in a recent Just Commons order.

It's one of those cards that doesn't quite fit into any of my mini-collections, but one I had to have nonetheless. I love the exasperated expression on Macfarlane's face.

It reminds me of when Nuke LaLoosh shook off Crash Davis in Bull Durham. 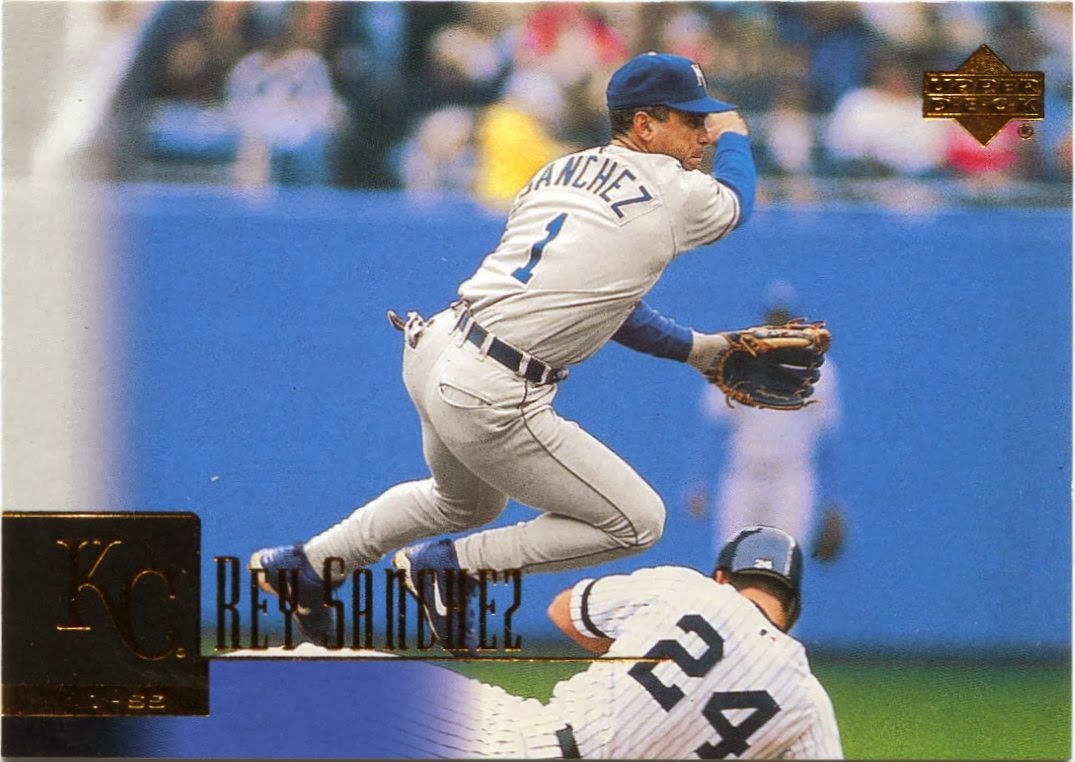 Don't look now, but it's another "double dip".

I rather like the nice Yankee Stadium backdrop on this one. 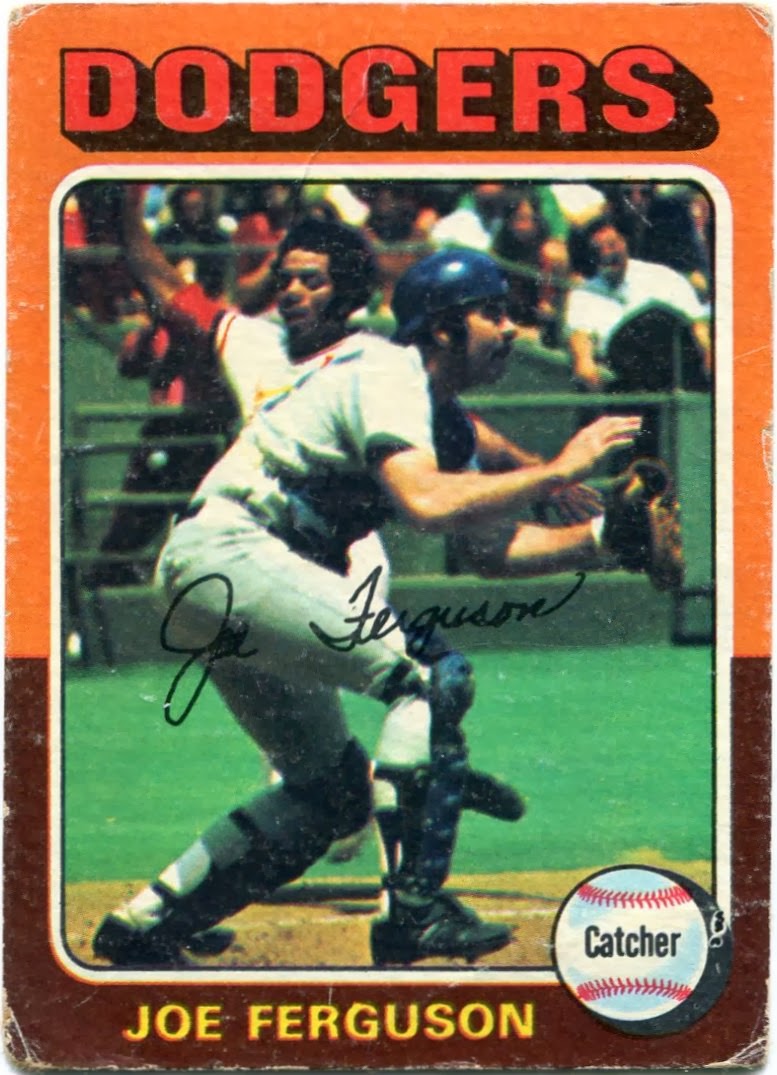 For a long time, I assumed that there weren't any "plays at the plate" in '75 Topps.

I snagged this beauty from one of the more jaw-dropping discount bins I've ever seen. If you read through that post, you'll probably find that another vintage Dodger stole the show.

That's not taking anything away from Joe Ferguson, though.

I have a feeling this one will be a permanent frankenset inductee. 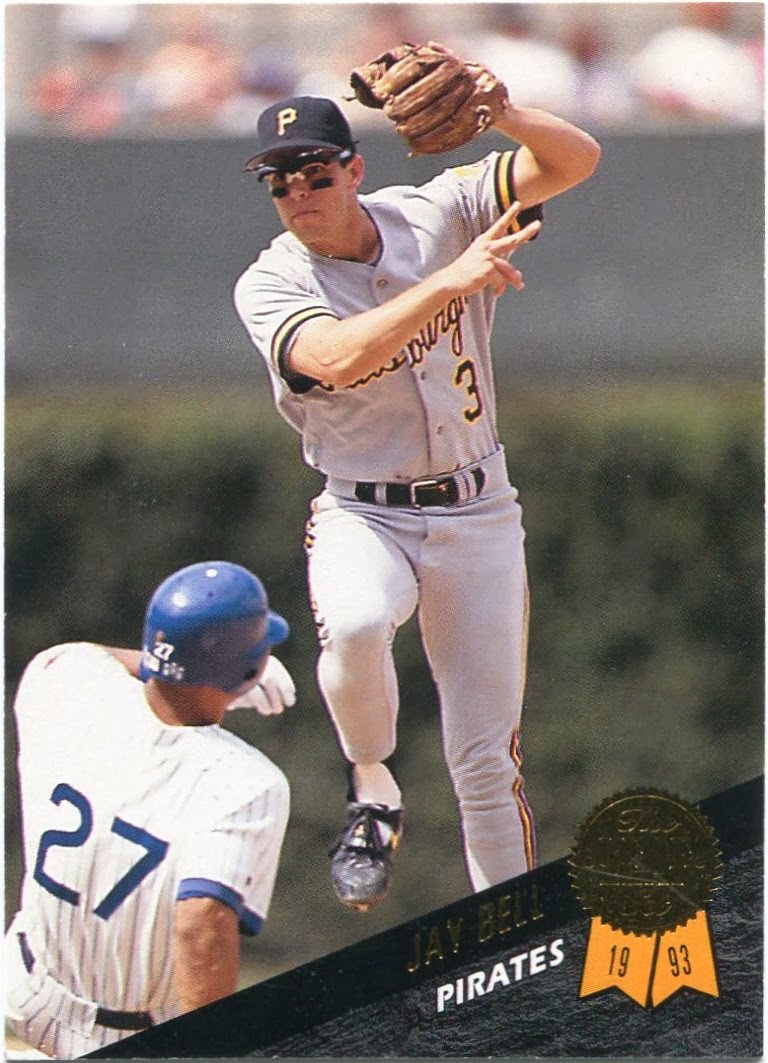 Coming from one of the greatest sets ever in 1993 Leaf, here's the fourth "double dip" from this frankenset page.

I should add that this particular card has one of the greatest backs in history. 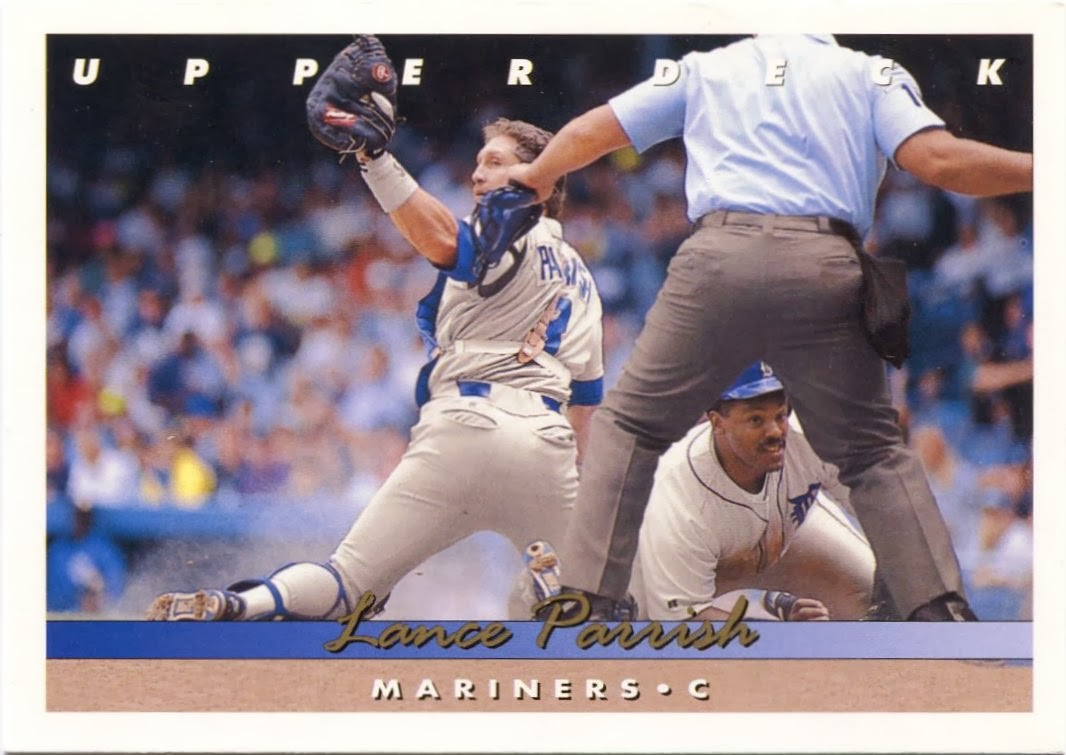 We close out this frankenset page with one of the better cards in the 1993 Upper Deck checklist.

Given how awesome '93 UD is, that's really saying something.

Card companies can sometimes go horizontal just for the sake of going horizontal. Not in this case, though.

A vertical shot wouldn't have begun to do this amazing shot justice. This beauty provides a terrific horizontal frame for the great catcher/baserunner/umpire combo, especially with the perfect framing of Cecil Fielder between the ump's legs.

And, in something I've been trying to do more often lately, I dug into the archives to try and track an exact date to this particular shot.

I'm led to believe that this photo was snapped in the bottom of the second inning during a Mariners-Tigers contest on July 6th, 1992 in Detroit. (The Tigers ended up with a narrow 5-4 victory.)

Judging by the ump's reaction, it's safe to assume that Cecil Fielder was out at the plate. After reaching on an error to start the inning, the Tiger DH advanced to third on a single by Mickey Tettleton.

The next batter, Dan Gladden, lofted a lazy fly ball to right. Fielder tried to tag up and score on the play, only to be gunned down by Mariner right fielder Jay Buhner.

It's quite the action-filled ending to today's frankenset page.
Posted by Nick at 3:50 PM

That Rod Beck card is awesome! Never seen it before.

Whoa! I've never seen that Lance Parrish card before. That's gotta be one of the best pieces of cardboard from 1993...heck, from the entire decade!