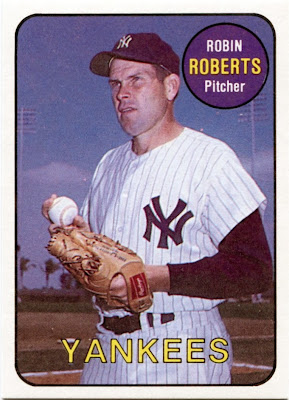 If you read the second of my Christmas posts earlier this week, you might already know that my dad tracked down one of the more gaping holes in my "zero-year" collection.

The card in question was a 1962 Topps Robin Roberts, one that lists him as a New York Yankee. As it happens, though, the Hall of Famer never played a single game for the Bronx Bombers.

He was cut by the Yankees during Spring Training in '62. He'd catch on with the Orioles, where he'd revive his career. (Roberts retired after a 1965 season split between the Astros and Cubs.)

Because he did actually pitch a few games with the Yankees in Spring Training that year, I figured there had to be a few actual photographs of Roberts in the pinstripes. A quick image search uncovered a more shocking fact, though.

There was another card of him as a Yankee!

I knew at that moment that this was something I needed to have. I went off to Ebay to try and find one for myself. At some point, I stumbled upon a Buy It Now/Best Offer auction that included 15 of the 24 cards from the 1986 Sports Design J.D. McCarthy oddball set.

Luckily for me, the Roberts was in the lot. I sent the seller an offer which was accepted the next day. All told, this tough-to-find oddball lot set me back just under seven bucks. (And over half that cost was for shipping, which is why I don't buy individual cards off Ebay too often.)

While the Roberts was the crown jewel of the auction, quite a few other gems came to light as well. 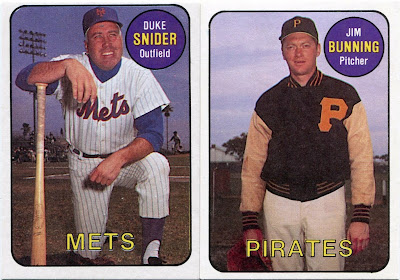 I dime boxed (I guess it's a verb now) a few of these at this year's National, so this wasn't the first I'd seen of this set.

The 24-card offering is comprised entirely of Hall of Famers. And, as an added bonus, a few feature the greats in some not-so-familiar jerseys.

Of course, the Roberts was the most unfamiliar of them all. But the two you see above aren't exactly common in the hobby, either.

That's just the fifth card I own of Duke Snider as a Met. Three of the ones I do have are reprints, by the way.

The Bunning is just my third card of him in Pirates gear. 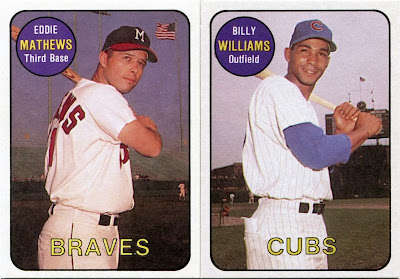 I spy lurking American flags in both of these shots.

Everyone from Brooks Robinson to Lou Brock to Eddie Mathews to Billy Williams was featured in this set.

As far as sheer star power goes, it's one of the better offerings you'll find. 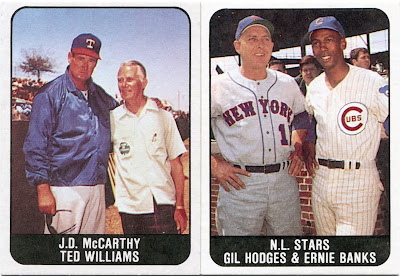 On the left is a shot of Ted Williams with the man responsible for this oddball set, J.D. McCarthy. "The Splendid Splinter" lasted just one year as the Rangers' skipper after the team's move from Washington.

In a great old-time Wrigley Field shot, the Hodges-Banks pairing is quite a combination. Hodges's playing career with the Mets wouldn't last long, though he would enjoy a successful stint as the team's skipper after he retired.

Both were indeed at the top of the National League in their heyday. 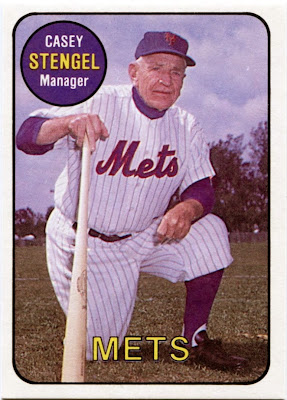 Unlike a lot of HOF-centric releases, this set doesn't shy away from legendary skippers.

I love this shot of Casey Stengel in his later Mets years. "The Ol' Perfesser" will always be remembered for his dominant tenure at the helm of the Yankees, but part of his legacy will always involve his stint with the hapless expansion Mets as well.

Whether he likes it or not.

Way cool! Those are some neat pickups, Nick.