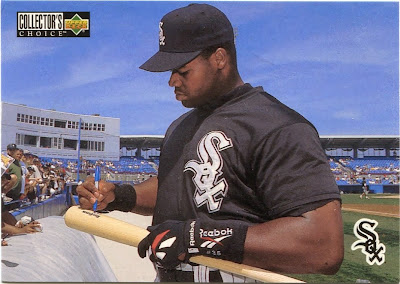 When I was on the forums, I once tried to recap just how many of the 50 states I'd traded with during my tenure there.

I don't remember the exact number, but I think I had around 45 or 46 of them covered at the time. I can't be sure, but there's a chance I may now have completed trades with all 50 thanks to the many swaps I've made here in the blogosphere.

Save for Canada, though, I didn't send too many packages out of the country.

I think I made a trade with someone in Mexico once. And there's one from Taiwan that comes to mind. I've also received a box from Australia, courtesy of one of my "blogger buddies".

Now, I have another country to check off the list. Ana Lu of the great blog "Hobby Cards Europe" recently sent me a nice assortment all the way from Portugal.

There's something peaceful about knowing that I have fans from that far away. Plus, a package like this contains a lot of firsts.

The terrific "autograph" shot of Frank Thomas you see above is the first mini-collection hit I've received from Portugal. 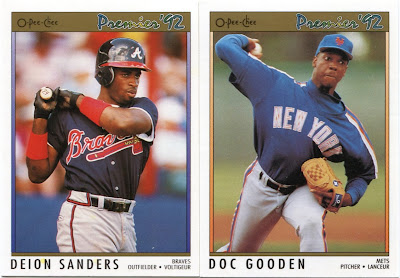 These are the first O-Pee-Chee cards I've ever gotten in from Portugal.

Unlike the standard Topps knockoffs, OPC received separate sets in the early '90s under the Premier brand.

As long as I see French on the fronts and backs, that's all that matters. 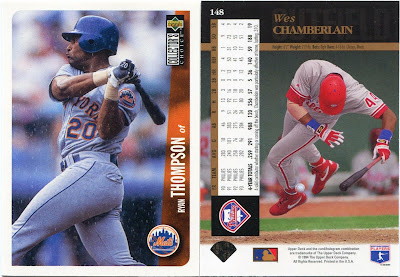 Ana also sent along a few great randoms as well.

I'm partial to absolutely any cards that feature rain on the front. I've often thought about building a mini-collection around that sort of thing, though I haven't pulled the trigger just yet.

While I wish they were more common, you can probably count the number of "hit by pitch" cards out there on one hand. The back of Wes Chamberlain's 1994 Upper Deck issue features the former Phillie getting plunked square on the ankle.

I believe it's only the third or fourth card of the sort in my collection at the moment. 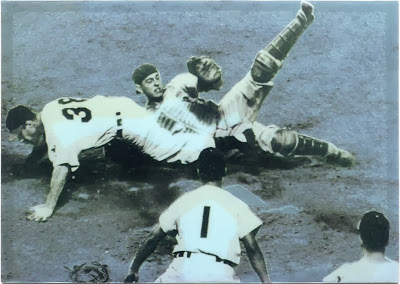 By far the greatest development of this package, however, was the stack of these awesome oddballs Ana included.

There were at least a dozen of these beauties among the great cards she sent along. They hail from the 1995 Phil Rizzuto's Baseball National Pastime checklist.

I'd never seen these precious oddballs before this package came my way. Each one features a chromified rendition of an old-time baseball shot.

Check out that "play at the plate" from the game's Golden Era. 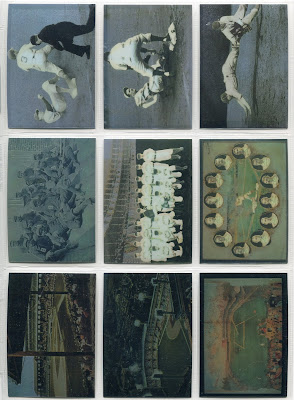 The subjects range from action shots to team photos to old stadiums.

I have absolutely no idea how these things were released or distributed, but I'm surprised I hadn't known about them before Ana came along. 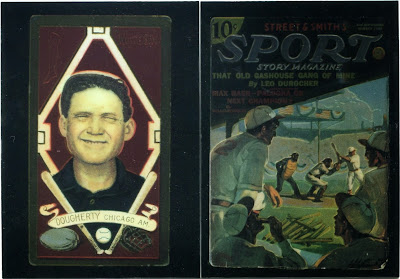 Tobacco cards and baseball magazines even appear in this magnificent checklist.

If I ever have the money, I'd love to chase down things like old programs and magazines for my man cave.

They're certainly pieces of history. 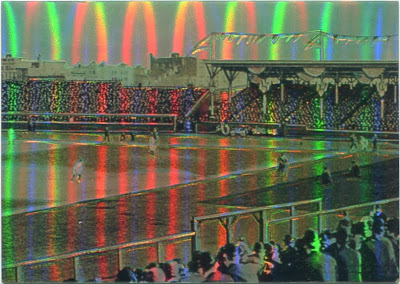 As if these weren't great enough, some of the set's singles apparently come in refractor versions as well.

What you see above is a beautiful rendition of old Highlander Park, home to the turn-of-the-century New York Highlanders. As you might already know, the team eventually changed its name to the Yankees in 1913.

The rest, as they say, is history.

Thanks to these fantastic old-time chrome pieces and all the other great cardboard Ana sent, the first package I'd ever received from Portugal proved to be quite a doozy.

To be honest, I didn't know this hobby even had fans in Portugal.

That is an awesome package Nick.

P.S. You should do the mini hit by pitch. There are more than you think out there. I was going to post about some I have sitting here including one of those, but I think I will just send it to you.
BTW, I've been considering adding a new mini myself, "Bubble gum Bubbles" rather I'd call it "Bubbles", yeah bubbles. LOL

Never seen those Rizzuto cards before. Wow, those are nice!

I'm truly glad you liked the cards.
The moment I got those chrome cards with plays-at-the-plate and old stadiums cards I knew I had to send them your way.

It's difficult to keep the hobby going on here at this side of the Atlantic Ocean but I do my best ;)

Have a nice year Nick.