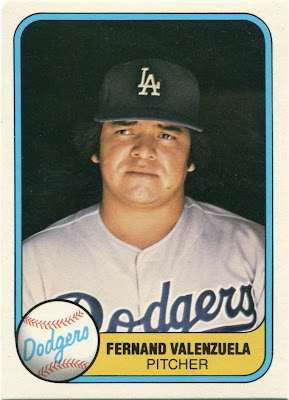 I often hear of people trimming down their collections.

It's certainly something I can see, as this little hobby of ours can take up quite a bit of space. It's perfectly understandable to want to thin things out a bit.

Still, even with the gluttony of different collections I have, I can't envision a day where I'd be able to trim down my cards. I just don't think I could ever stand to part with any of my beloved pieces of cardboard.

Luckily for me, space isn't a real concern right now. (Although it may well be when I move into my own place down the road.)

As an added bonus, fellow collectors looking to trim things down sometimes come to me for help. And I'm more than happy to oblige.

That was the case when reader Mark from way up in Alaska contacted me about possibly helping him thin out his collection a bit. A few days later, one of the most brilliant trade packages I've ever received arrived on my doorstep.

Mark's goodies were separated into two snap cases. One simply included a bunch of random cards.

The inclusion of a Fernando Valenzuela rookie (my first) was the first indication that this package was really going to be something special. Heck, this one is more than just a rookie card. It's also another add to my "Errors" mini-collection.

His first name is Fernando, Fleer. 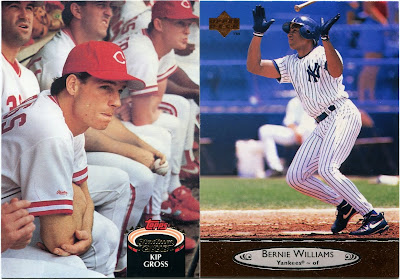 Mark managed to pick out a few striking feats of photography as well.

I don't think I've ever seen another card quite like that Wells. So many Reds players packed into one photo. And each one seems to have a different reaction to what just transpired on the field.

"Uncle Bernie" (as my dad likes to call him) knows that ball is going a long, long ways.

As is the beauty of the bat flip. 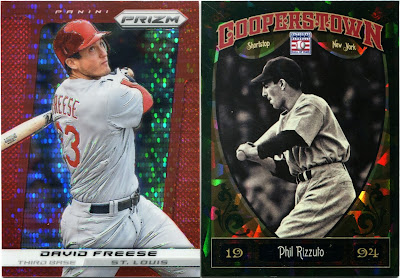 Also among the goodies was a healthy dose of shiny.

In addition to being quite colorful, both of these fit well into a couple of my many player collections.

The Freese (a parallel) was actually the first I'd seen from the 2013 Panini Prizm set at that point.

If all Prizm cards looked like that, I'd probably hold the brand in a bit higher regard. 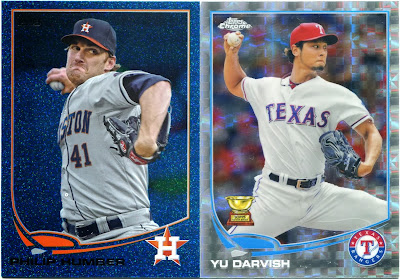 I'm not sure whether Mark caught on from a few of my past hints or whether it was pure coincidence, but I'm a big Philip Humber fan. I was already collecting him when he tossed his perfect game in 2012.

I believe the beauty Mark sent along is a blue slate parallel, a variation that was only available via hobby shops in 2013. It looks a thousand times better in person, believe me.

Unfortunately, "Mr. Perfecto" has fallen on some tough times since then. The A's recently signed him to a minor league deal after an atrocious stint with the Astros last year.

I'll be rooting for a dramatic comeback in 2014. 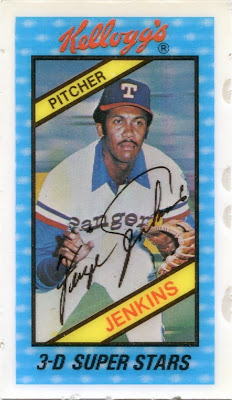 The other of Mark's snap cases was entirely filled with glorious, glorious oddballs.

In fact, it came with a note attached.

These are sort of a "guess the set" game, which should be a card blog game.

Well, Mark, you got your wish. It's now time for the inaugural edition of (cue Wheel of Fortune voice)...

The sheer variety of oddballs Mark sent made this a pretty tough game. Let's see how many you can get.

We start of with arguably the kind of oddballs, Kellogg's. I don't receive many of these in trade packages, so seeing Fergie fall out of Mark's mailer was an awesome surprise.

It hails from the 1980 Kellogg's checklist.

Give yourself a point if you knew that. 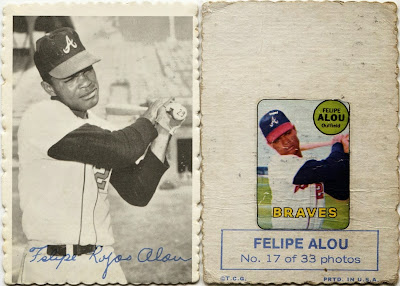 I get another point for that one, as I've been lucky enough to find a whole bunch of these in the past.

I actually already had a copy of the Alou in my Braves binder. But the one Mark sent had an added surprise to it.

At some point, a fellow collector decided to slap Alou's '69 Topps Decals sticker onto the back. As a result, the one Mark included now resides in my Atlanta binder. 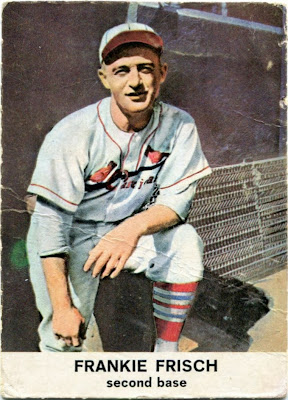 Those wound up being the only two points I'd get in "Guess the Set".

I was stumped by every other one Mark threw into this wonderful trade package.

This Frisch is a staggeringly beautiful addition to my Hall of Famer collection. I knew I'd seen the design somewhere before, but I just couldn't put my finger on it.

After minutes of staring at "The Fordham Flash", I decided to cheat. I searched and searched until I finally found the card's actual information.

It hails from the 1961 Golden Press set, one that included nothing but Hall of Famers.

Kudos if you got that one. 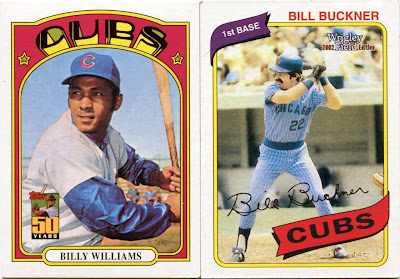 I can't believe I didn't already know about these.

Contrary to what I'd originally believed, this year's terrific Wrigley Field card giveaway wasn't the first time such a promotion had been held at the famous ballpark.

Topps partnered up with the Cubs to produce special oddballs in the early 2000's as well. The Williams and Buckner you see above come from the 2001 and 2002 giveaways, respectively.

I feel ashamed to be shut out in this round of "Guess the Set". 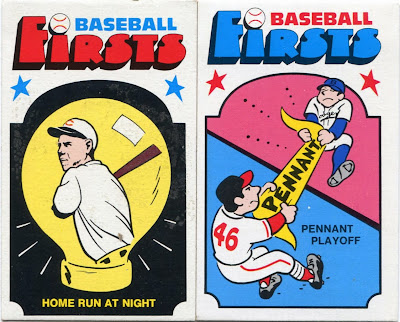 Now we're starting to get into the really tough stuff.

For what it's worth, Babe Herman of the Reds hit the first dinger in the dark on July 10th, 1935.

There's your useless trivia bit of the day. 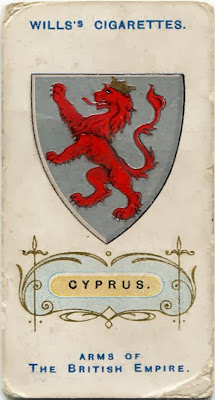 My first reaction upon seeing this one?

How old is this thing?

I'll give you 100 bonus points if you successfully "Guess the Set" on this terrific tobacco-era oddball piece.

As it turns out, this magnificent specimen is 104 years old. It comes from the 1910 Wills's Cigarettes "Arms of the British Empire" series. It was made before World War I started.

I never thought I'd get anything like this in a trade package. 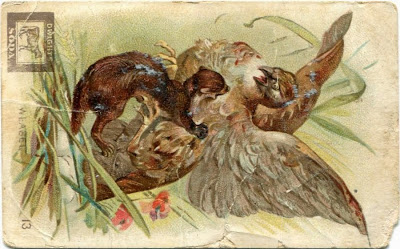 The same goes for this one.

This terrific "Interesting Animals" set was produced in 1915 by Dwight's Soda. Babe Ruth was in just the second year of his career when it hit the streets.

Though I do have to take issue with the claim that a weasel is an interesting animal. 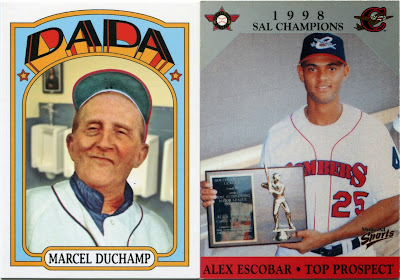 Let's take a look at a couple more stumpers.

I cannot find a single bit of information about the card on the left. I'm guessing it's a homemade custom.

A quick Google search shows that Marcel Duchamp was an artist who was at the forefront of the "Dadaism" movement. What's that, you ask?

No clue. But at least it explains the familiar '72 Topps font at the top.

What isn't explained, however, is why someone airbrushed in artist into a baseball uniform. Even more puzzling are the urinals in the backdrop.

The Escobar a sneaky good "Award Show" mini-collection hit that comes from the 1999 Multi-Ad SAL Champions checklist. As if minor league cards weren't obscure enough, the set is limited to just 750 copies, according to the back. 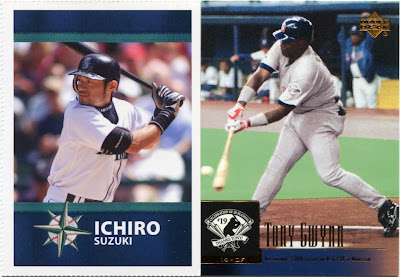 Here's another batch of "Guess the Set" contestants.

Truthfully, I don't have specific info on either of them. Bonus points for everybody, I guess.

There are absolutely no designations whatsoever on the Ichiro. It's perforated and measures about the same as a standard-sized baseball card. That's about all I know.

The Gwynn appears to come from some sort of honorary checklist. That specific shot captures the exact moment the great Padre collected his 3,000th hit in Montreal during the 1999 season.

These oddballs sure stumped me. 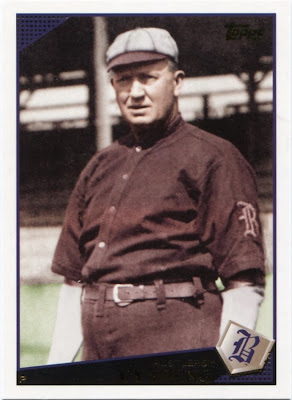 We'll close things out with a relatively easy one.

This, as you probably know, is a Cy Young "legend" short-print from 2009 Topps. And it's one I've wanted for quite a while now.

While it's tough to see in the scan, this is the only card I've ever seen that acknowledges Young's stint with the Boston Rustlers. If the all-time wins leader looks a little old and worn down in that shot, it's because he was in his final big-league season at the time.

At 44 years young, Cy Young split his last year between the Naps and Rustlers, pitching in a total of 11 games with the latter in 1911. That makes this one of the ultimate "Short Term Stops" cards in existence.

Oh, and by the way, the Rustlers only existed for one season. And that one season just so happened to intertwine with the end of Cy Young's career. The club would change its name to the Bees in 1912 and would eventually become the Braves that we know today.


Well, that's it for the first installment of "Guess the Set".

I hope it's the first of many. 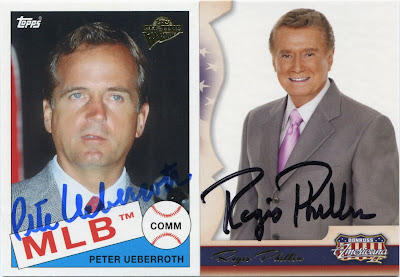 Still, those weren't all the surprises David had in store for me.

I've never been a big in-person auto guy, but the 'graphs I discovered in this trade package were simply shocking.

As great as they are, what if I told you signatures of guys like former MLB Commissioner Peter Ueberroth and TV legend Regis Philbin weren't the best of the best in this assortment? 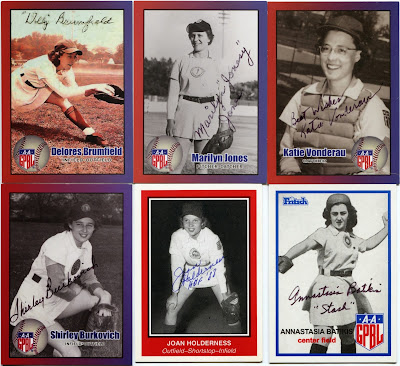 A few ladies had something to say about that.

This was honestly one of the greatest joys I've ever had while opening a trade package. I've had an interest in the All-Girls Professional Baseball League for as long as I can remember. (It was popularized in the famous film A League of Their Own.)

And, yes, these are real, actual autographs of a few of the women who played in the short-lived league.

Needless to say, owning cards like these never even crossed my mind in the past. I didn't think such a thing was possible.

Thanks to David, though, I'm now the proud owner of these fascinating pieces of baseball history.

It's generosity like this that makes me glad I started a blog in the first place.
Posted by Nick at 7:29 PM

Never heard of Duchamp?...one of his art "pieces" was a urinal....he's also the guy who did the mustache on the Mona Lisa thing....

Those card magnet powers of yours are starting to get out of hand, Nick. Seriously. Wow.

David in the north said...

Glad you liked em. The Gwynn is from his 2001 Upper Deck Farewell set which was given away as a little cello pack at the stadium. The Ichiro was from a Mariners fanpack (either 2012 or 2011). The Duchamp was from a (since forgotten) online company that made custom cards for people. They offered a free sampler pack and this was in it.