An impulse buy: The walk of shame 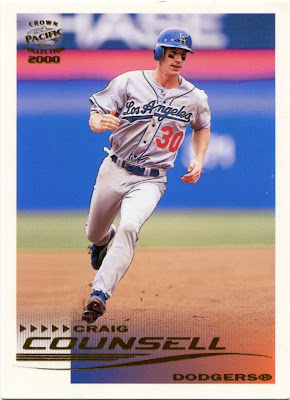 I don't know about you, but one of my most consistent day-to-day thrills is checking the mailbox each afternoon.

I've been trading with fellow collectors online for about seven or eight years now, and it's still every bit as exciting nowadays. Even more so now, in fact, because I rarely know when a fellow blogger is going to drop a surprise package of cards on my doorstep.

A few weeks ago, I had something extra special gift coming in the mail. As I think I mentioned a few weeks ago, I placed an order on Just Commons on Christmas. With their impeccable turnaround times, I figured it'd only be a few days before the contents arrived on my doorstep. At most.

Days and weeks started to go by with nothing from Just Commons. I kept having to endure that empty-handed "walk of shame" from the mailbox to the front door of my apartment. I wondered what the heck was going on with my order. (I've since heard back about the issue, but more on that in a later post.)

As I waited and waited, I began to get a little antsy. I needed a fix. So, while I was awake one morning with nothing much to do, I once again ventured back into the world of impulse buys.

Much like my last impulse purchase, I scored a total of eight cards from two different Sportlots sellers. I couldn't help but knock out a few "Dime Box Dozen" needs in the process. The Craig Counsell you see above was just that.

In similarity to the card of Harold Baines as an Indian from my last impulse buy, I didn't think any cards existed of Counsell with the Dodgers. One can't blame card companies for ignoring the tenure, as he hit just .259 in 50 forgettable games with L.A. following a midseason trade with the Marlins in 1999.

Again like the Baines, I stumbled upon this one by accident. I threw it up on my "Dime Box Dozen" list, hoping someone would come to me with a copy of the obscure Pacific Crown Collection single. But then I decided to cheat and land one off Sportlots.

In the end, I think I made the right choice. 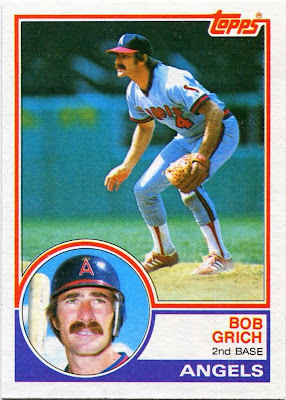 Like Mr. Counsell, this was also a "Dime Box Dozen" need of mine.

I'd had the OPC single of Bobby Grich's fantastic card in my binders for a while now, but not the standard Topps version. Thanks to my undiagnosed "cardboard OCD", that drove me absolutely nuts.

Thanks to Sportlots, I don't have to worry anymore. 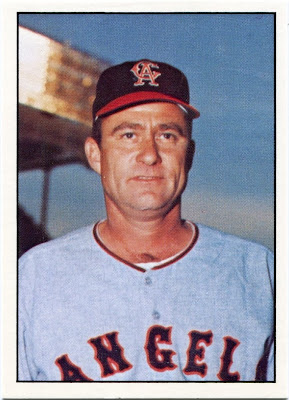 This was kind of a wild-card buy for me.

On a whim, I decided to type "TCMA" into this particular seller's inventory and see what came back. Sometime after that, I dug up this fantastic single from TCMA's 1978 release, one that focuses on the '60s.

Still, I'd bet even the most hardcore baseball fans might not know that he hung around the bigs all the way up until 1967. Hence, his inclusion in TCMA's 1960's checklist.

After years of drifting around from team to team, Burdette spent the final two seasons of his career with the California Angels.

This is the fourth card I own of him with the franchise, and one that earns bonus points for the neat stadium lights in the background. 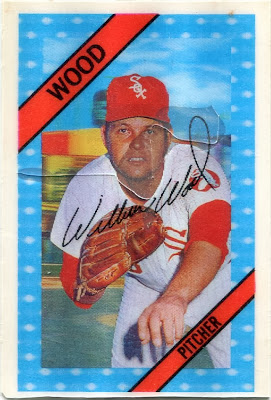 At some point, I always seem to search for 1970's oddballs when I'm in the process of these impulse buys.

I was shocked to come across this '72 Kellogg's beauty of knuckleballer Wilbur Wood for just fifty cents. With the luck I've had in finding nice cards of his lately, perhaps I should just go ahead and become a Wilbur Wood supercollector.

Still, the story doesn't end there.

As you probably know, I could really care less about the crack in this card's shining 3-D armor. (That said, the scan makes it look a lot worse than it actually is.)

Apparently, the seller didn't notice the flaw until he was pulling it for my order. Upon seeing the crack, he apologetically refunded my 50 cents and sent along the card for good measure. Little did he know that I didn't care in the slightest.

So, in the end, I basically got this Wilbur Wood Kellogg's card for free.

It's funny how things work out sometimes. 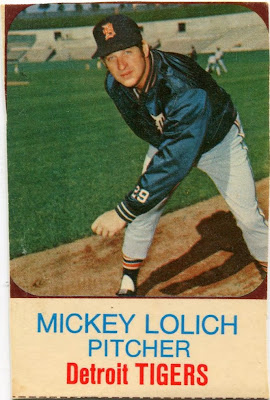 My quest for vintage oddballs didn't end there, though.

I also picked up a couple greats from the sweeter side of the 1970's, Hostess.

For twenty cents, I managed to snag this gloriously miscut Mickey Lolich from '75 Hostess, the brand's inaugural release. 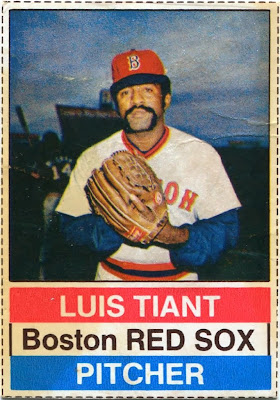 Plus, for just thirty cents, I tracked down this beautiful dusk shot of "The Pride of Havana" himself, Luis Tiant.

If I had to go back and rank them, I'd probably rate '76 (that's the spirit!) as my favorite year of Hostess. I love the red, white, and blue color scheme, which was used to sync up with America's bicentennial that year.

If only someone would revive this design for a set nowadays...

Now there's an idea for you, Topps. 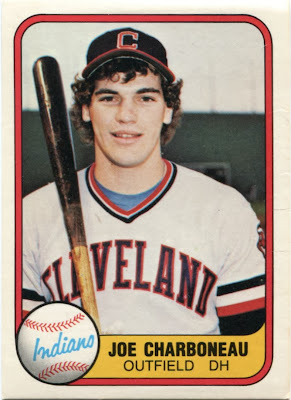 Like Councell and Grich, I knocked out another "Dime Box Dozen" need with this nice Joe Charboneau rookie.

With this, I believe I now own every major-brand card the former Indian had issued during his career. Granted, Charboneau only played in the bigs for three years, so I'm not sure how much of an accomplishment that really is.

I've noted in the past how much I enjoy learning about short-lived heroes from baseball history. Joe Charboneau is near the top of the class in that regard. That's why this 1981 Fleer rookie was such a big need in my eyes.

If you haven't read your Charboneau literature, plan on doing so soon. 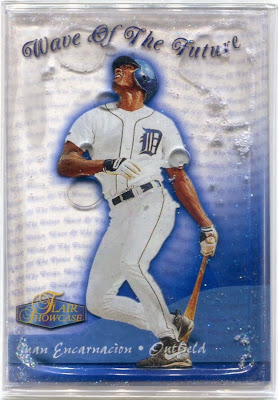 This was the card that triggered my latest impulse buy.

I'd seen these Flair Showcase "Wave of the Future" inserts making their way around the blogosphere for a while now. Frankly, I'm not sure how I didn't know about these before.

I mean, they have water inside of them! How cool is that? (It's actually vegetable oil, from what I hear, though that doesn't take away from their awesomeness.)

After hearing all the rage, I knew I had to own one for myself. I grabbed the cheapest one Sportlots had, which happened to be this one of former Tiger outfielder Juan Encarnacion.

While it may look pretty neat in the scan, let me tell you that these puppies are a hundred times better in person.

I doubt it'll be the last one of these I buy, either.

Between free Kellogg's, "Super Joe", and aquatic cards, this latest impulse buy helped take the dreaded "walk of shame" off my mind.

It certainly gave me the cardboard fix I needed.
Posted by Nick at 5:48 PM

Zomg that Wave of the Future card has to be one of the coolest cards I've never seen! How the hell have I never seen that set before?

As I'm sure you can imagine, I need to track down a copy of that Counsell card myself. It's gonna be his PWMD card (because it's the only one out there...). I've never tried Sportslots before. Looks like you found another way for me to hemorrhage cash.