The meaning behind collecting 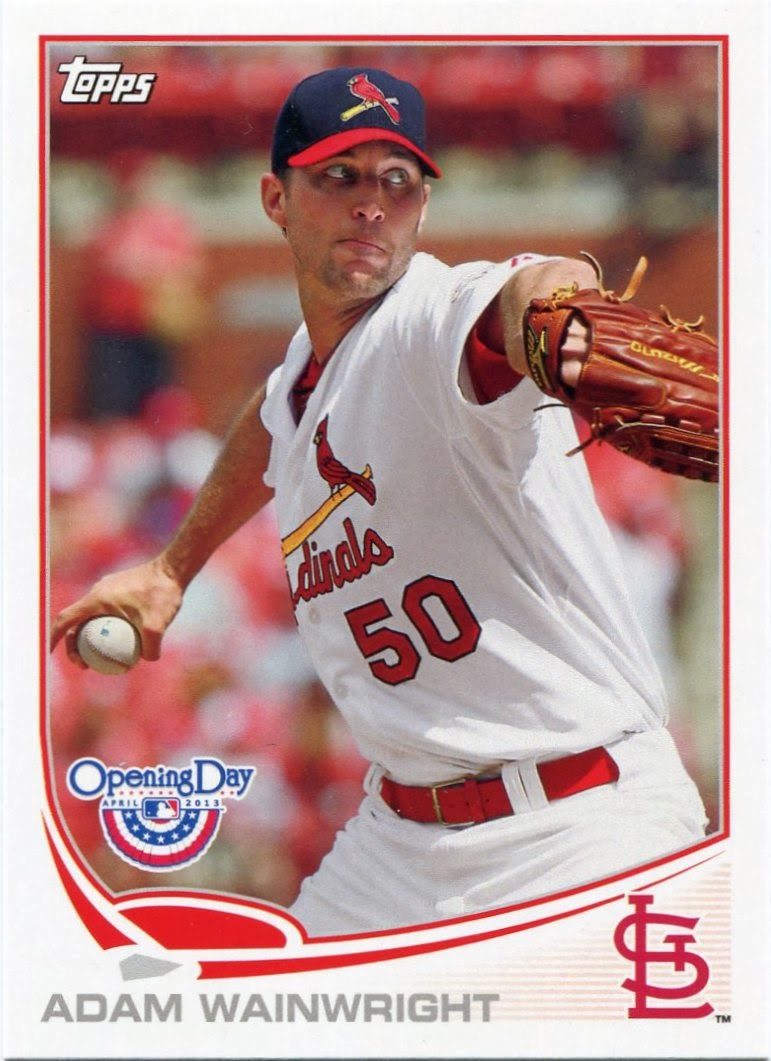 Our hobby has a whole bunch of weird terms.

With things like XRCs, "mojo", and frankensets, it's easy to see why people outside of the card universe think we're a little off. It's like we speak a whole different language sometimes.

Now, if someone asked me what I do as a hobby, I'd put it in the simplest terms possible.

I'm sure most of us say "I collect this" or "I collect that" quite a bit. What exactly do we mean by that, though?

For example, I just decided to start collecting Adam Wainwright. So, then, I guess that means I'm willing to take any and all cards of his I can find. Whether through trades, dime boxes, or wherever else, I'm now open to receiving any Wainwrights that may be floating around out there.

Perhaps, but I think it goes a bit further than that. 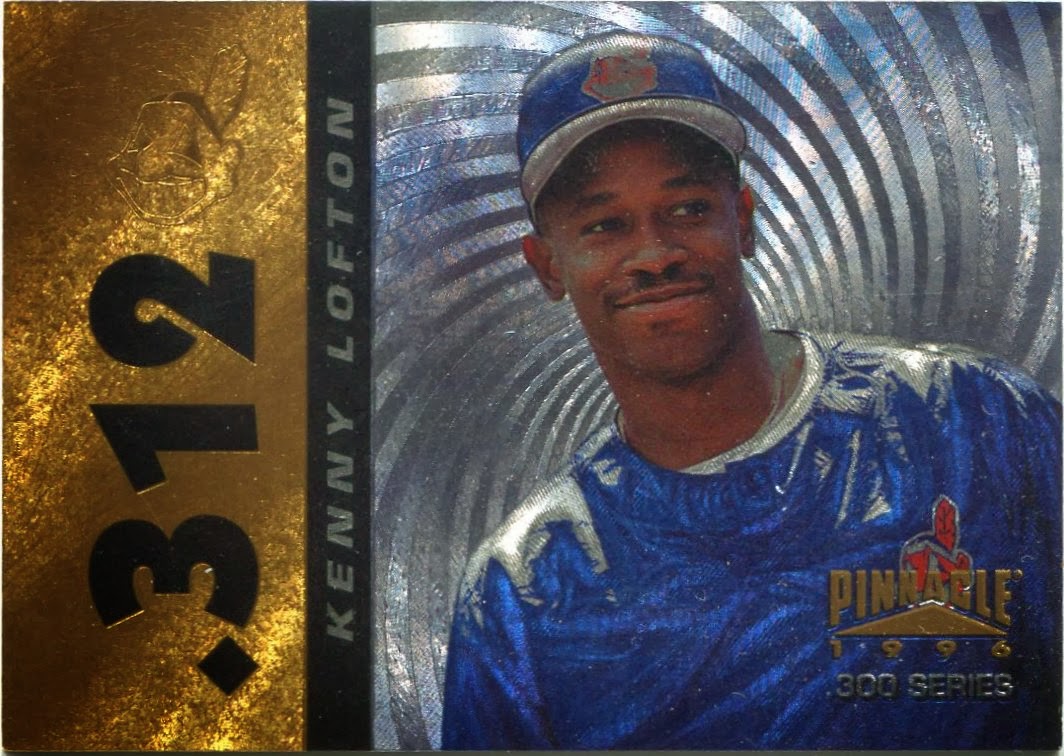 One major distinction, I think, is drawing the line between simply liking something and aggressively collecting it.

I've been collecting Kenny Lofton cards for years. Any time I can find something new of his, I pounce on it. I rather like the psychedelic qualities of this neat '90s parallel, but the only reason I bought it in the first place was because it featured Mr. Lofton.

Yes, I like uber-shiny and sparkly cardboard. But I wouldn't say I collect them. I don't go into a card show trying to get all the shiny cards I can find. If I happen to see a cheap one, sure, I might buy it.

Still, liking something is one thing.

Collecting is quite another. 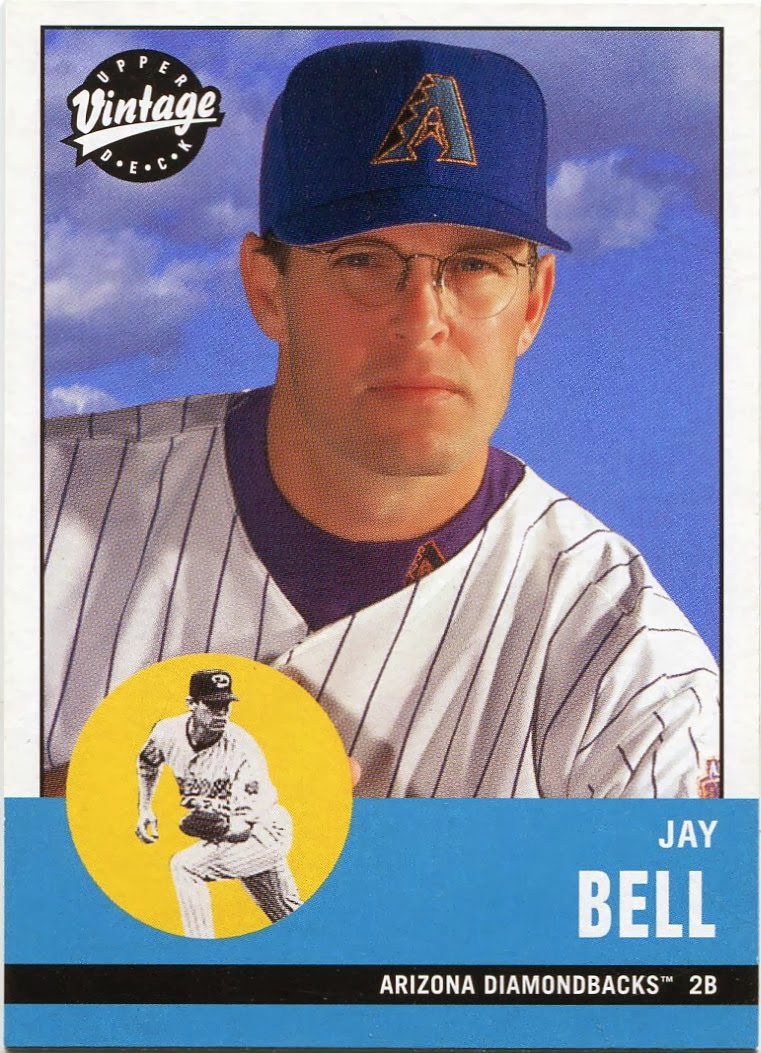 Subconscious collecting is a real thing.

I've been doing it for a while now. I'd been picking up Rickey Henderson cards from various places for a while without even realizing it. Only recently did I decide to start consciously chasing after his cardboard.

By and large, I think the majority of collecting is done consciously. I can definitively say "Yes, I collect this" or "No, I don't collect that" about a lot of things.

Although people have been sending me bespectacled ballplayers for a while now, I've never officially declared it as a mini-collection of mine. Not yet, anyways. (Though I do appreciate all the ones I have received.)

I'm just not quite sure I'm ready to undertake a mission to track down all the specs the card world has to offer. 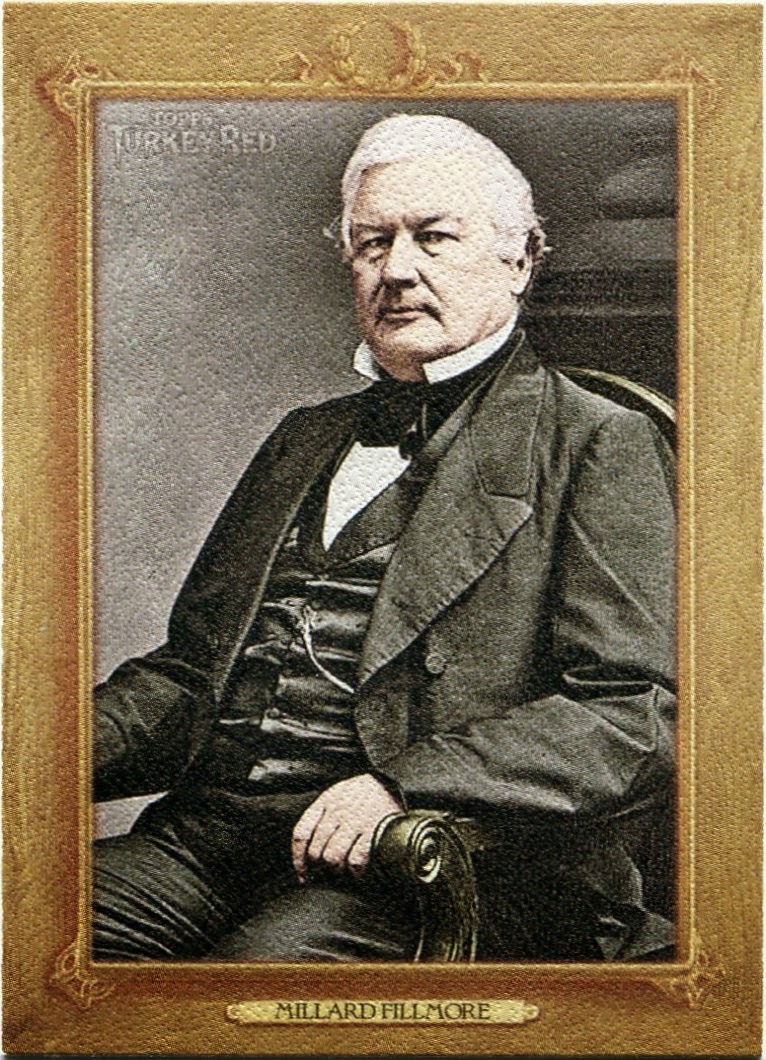 Collecting is largely determined by commitment.

I'm not sure I'm committed enough to bespectacled ballplayers to start an outright collection of them just yet.

Take something like presidential cards, though. I've long been a fan of U.S. history and the Oval Office in particular. It's been that way for as long as I can remember.

Because of that background, I'm committed to tracking down any president cards I can find. Whether it's Abraham Lincoln or Millard Fillmore, I want them all.

That's a question you have to ask yourself when you're thinking about starting a collection.

Is it worth the commitment? 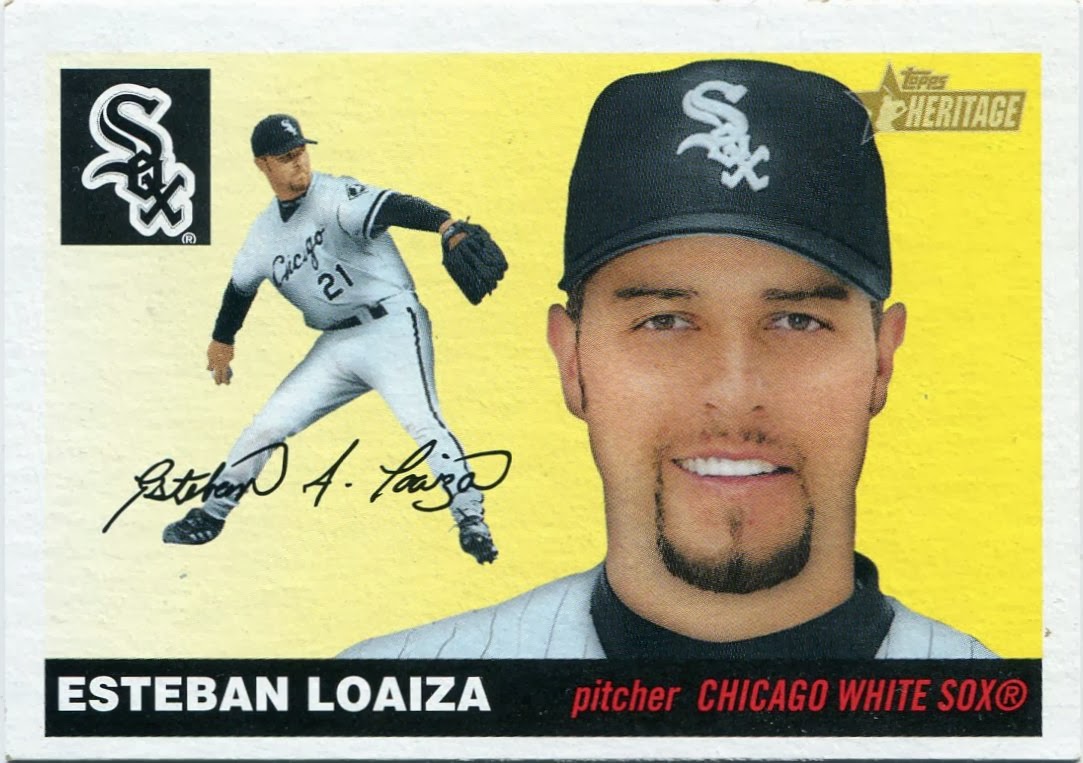 Okay, so you've decided it is worth the commitment and you want to start a new collection.

So, then, do you have to devote every waking hour to tracking down cards for that collection?

From personal experience, not really. While starting a collection is a big undertaking, there are different levels.

I casually collect a lot of things. Take Esteban Loaiza, for instance. Remember him?

After years of mediocrity, he came out of nowhere to have a brilliant 21-9 season with the 2003 White Sox, posting a 2.90 ERA and leading the league with 290 strikeouts. (He finished second in the Cy Young voting to Roy Halladay.)

He didn't do much after that, toiling with the Yankees, Nationals, A's, and Dodgers throughout the rest of his career. It's still one of the more unexplained outbursts of greatness in baseball history.

Footnotes like Loaiza are sprinkled throughout my binders. If I see a neat card of him in a dime box, I'll definitely take it.

It's more of a casual thing. 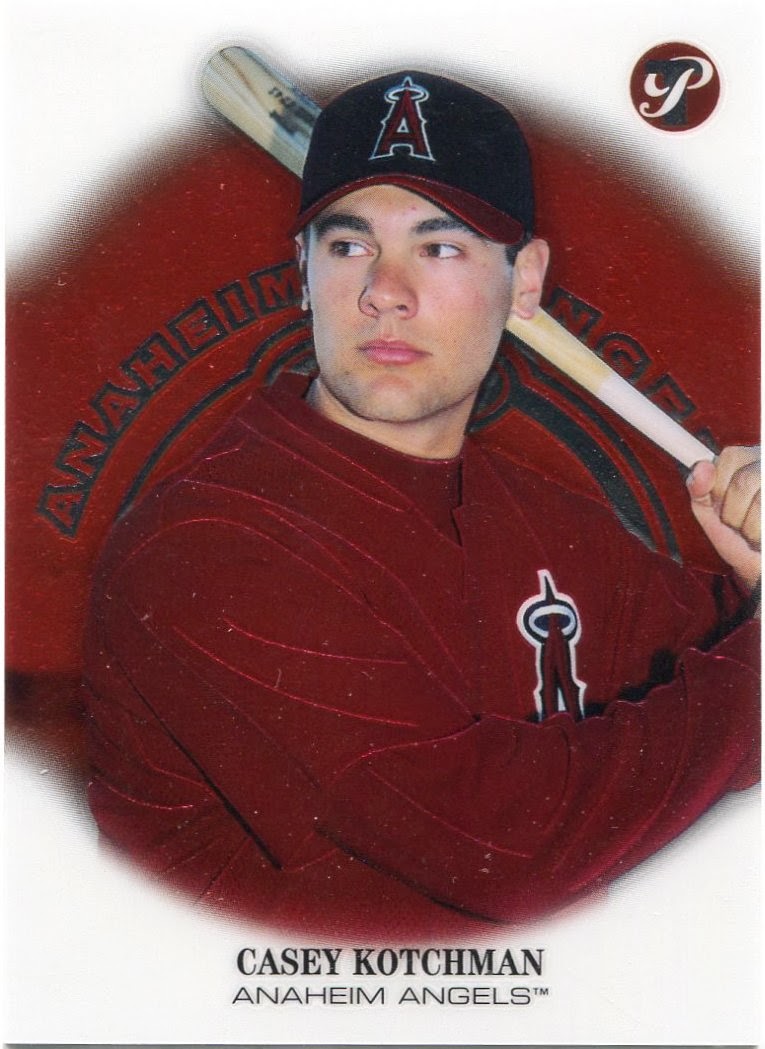 With guys like Casey Kotchman, though, it's a whole different story.

I own well over 100 cards of the former can't-miss prospect, which I'm especially proud of since he's been a fairly obscure name for most of his career.

While he was never a big star, I've paid a few dollars for Casey Kotchman cards over the years. I think this 2002 Topps Pristine rookie set me back a buck.

Personally, that's a good borderline between casual and aggressive collecting. If I'm willing to lay down more than a dime or quarter for the guy's card, then there's a good chance that he's in the top tier of my collection.

I think money is another determining factor as well. Seeing as how some people plunk down wads of cash to build complete and costly sets from the '50s and '60s, perhaps my paltry card budget isn't the best indicator.

Still, as of right now, I probably own around 25 or 30 Esteban Loaiza cards. They probably set me back about three bucks all together.

With my supreme player collections of Kotchman or Marlon Byrd, though, I've spent a lot more than that.

If you're looking to do more than casually collect something, there's a good chance you'll have to tie up a bit of money in the process.

I have no regrets about the amount of cash I've poured into my Hoyt Wilhelm or Casey Kotchman collections.

And, if you're truly happy with your collecting choices, neither should you. 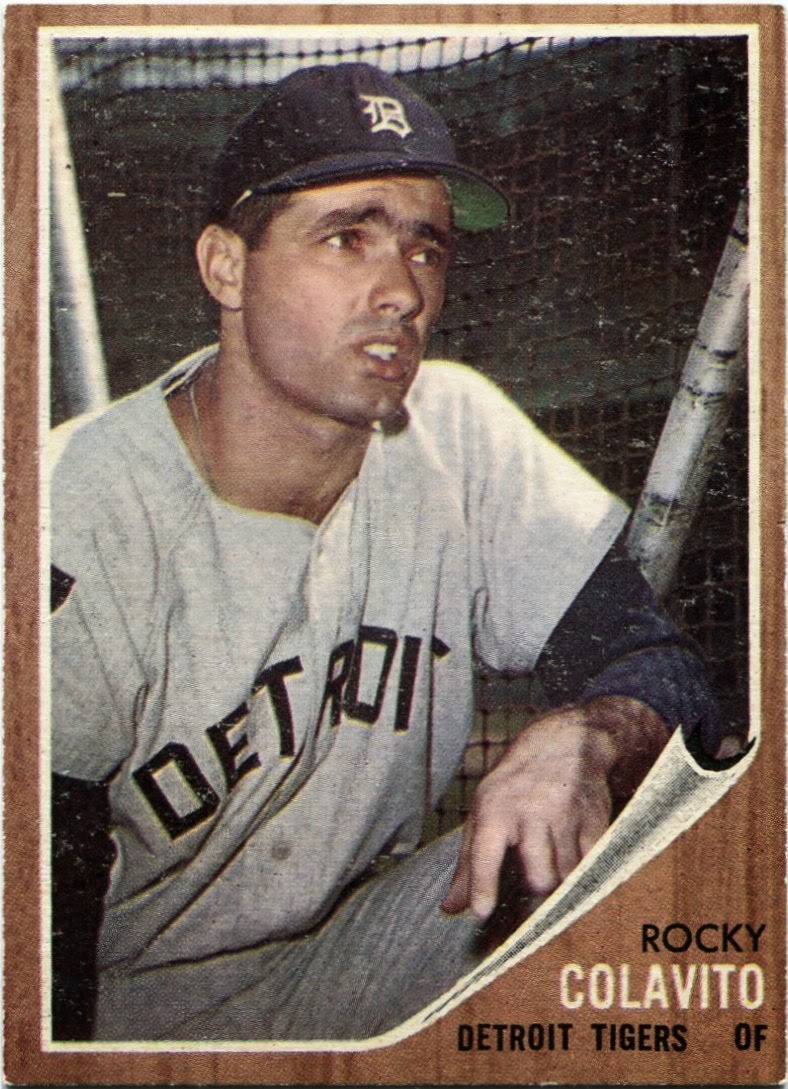 That's really the most important part of collecting.

It's supposed to be fun.

You can do it at your own pace and with the amount of money you choose. There aren't any deadlines when it comes to collecting.

And, for the most part, collections are never really complete. I love finding new Rocky Colavito cards, but I doubt I'll ever own all of them.

That might sound like a bad thing to some people, but it's really not. Your work is never done in this hobby.

There's always another collection waiting for you.
Posted by Nick at 6:09 PM

I should have a stack of Wainwright doubles to offer up to any and all comers in the near future.

Thanks for making our OCD sound so rational and easy to control. I'll have to see if I can reach such a balanced place. Though, like collections, I doubt it's a finite goal with an achievable end...

He's not lying about being interested in presidents from an early age,folks....Nick,remember the placemat we had on the dinner table?.... it had all the presidents on it and he loved reciting them!

And my Wainwright post is up now. I meant to hold it until tomorrow, but I forgot to save it in draft. Let me know if you need anything.

Ooh, if you're ever interested in trading that Jay Bell, drop me a line!