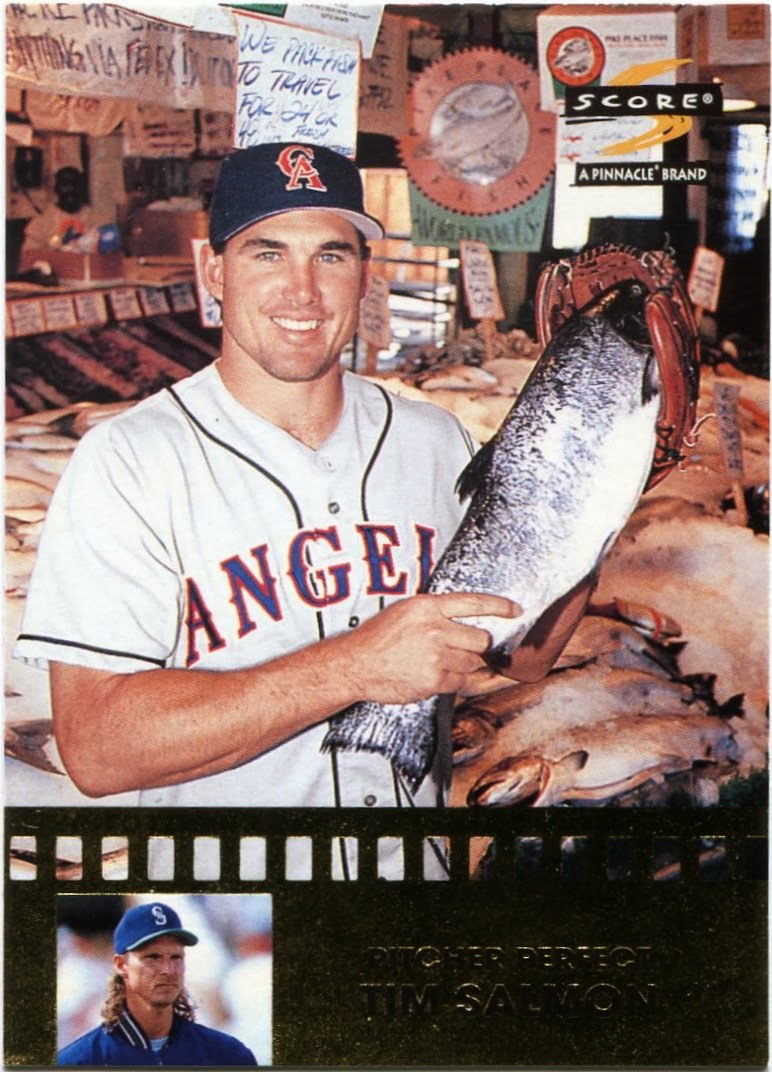 I think I'm a fairly down-to-Earth type of person.

For the most part, I'm pretty laid back. I'm not a thrill seeker. I don't try and take life to the extreme, as they say. And I can consistently control my impulses.

In everything except baseball cards, that is.

Back when I posted about my first impulse buy back in early 2012, I didn't see it becoming a regular thing on this blog. Yet it has. I'm still trying to decide whether that's good or bad.

Granted, the good thing about my impulse buys are that they're not all that costly. Most, including the one you'll read about in this post, come in at under five bucks. Heck, I've seen people drop hundreds of bucks on a whim at card shows.

If I happen to see a new card or remember an old one that I really want, it often triggers an impulse purchase. The quirky Tim Salmon single you see above was responsible for the last one of these posts.

Just Commons has become my go-to source for buying in bulk, but I still use Sportlots for these smaller buys. I know people don't like having to pay separate shipping costs, but there are sellers with reasonable rates. The goods you'll see here came courtesy of separate orders from two different Sportlots members.

Plus, since I haven't done a "Covering the Bases" post in a while, I've decided to rank all eight cards from this latest impulse buy.

All eight filled vital gaps in my collection. 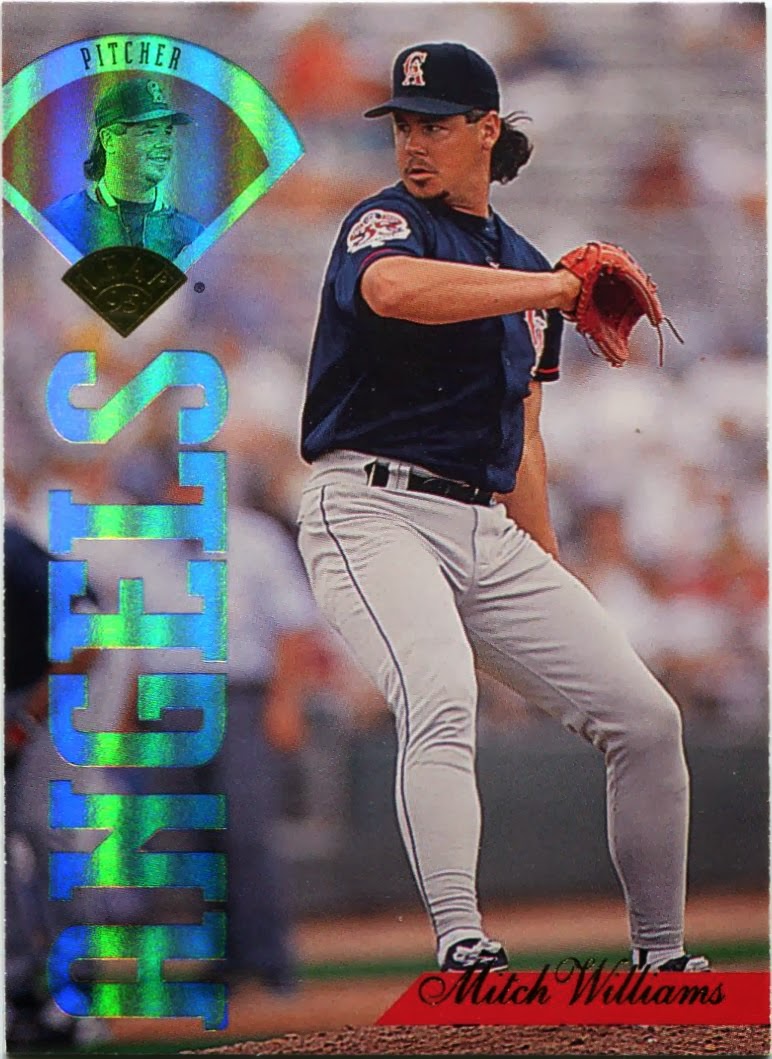 I bought this one for uniform reasons.

True, I do collect anything and everything of Mitch Williams. But, although I seem to be in the minority here, I've never much cared for 1995 Leaf. It's a set I feel that I should like, but I simply can't.

For a long time, I didn't think any cards existed of "Wild Thing" in Angels gear. He pitched in 20 games for the franchise in 1995.

I found my first in the last impulse buy I made. Now, with this '95 Leaf issue, I have a second. And I know there's a few more out there for me to hunt down.

Sadly, I don't think any cards were produced during Williams's short seven-game tenure with the 1997 Royals.

That makes this a "sunset" piece. 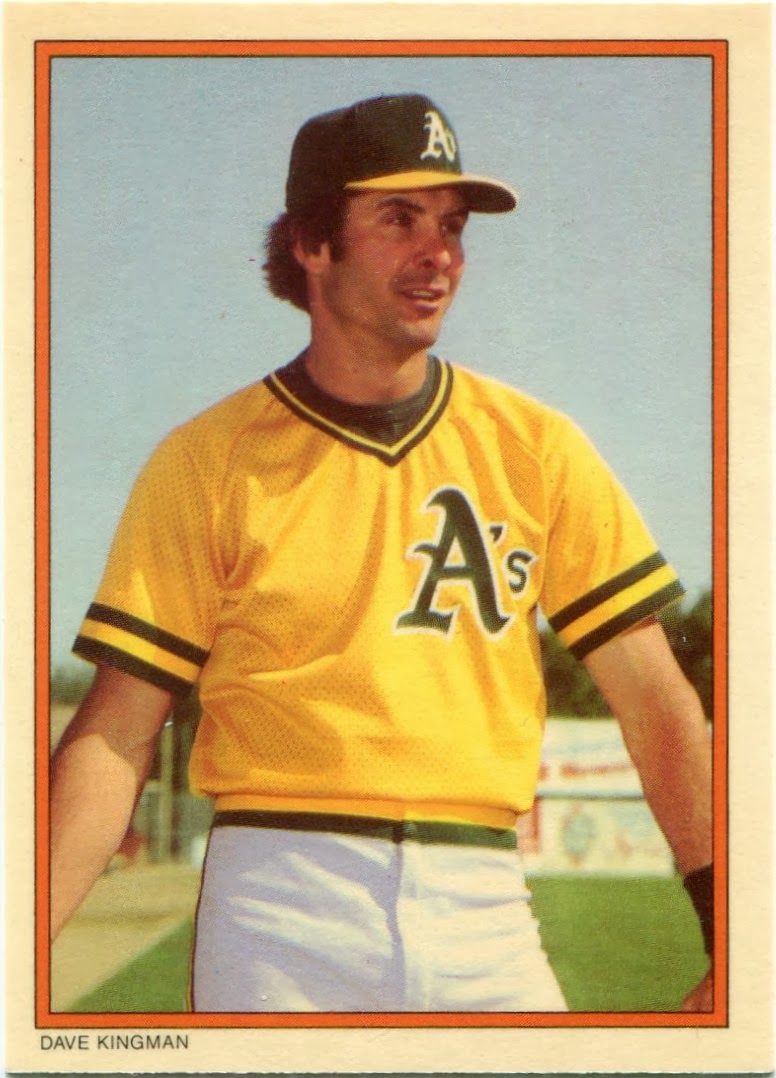 Any time I see one of these Circle K cards, I can't help but think of the line from Bill and Ted's Excellent Adventure.

Strange things are afoot at the Circle K.

Sadly, I don't see many Circle Ks around these days, so I don't get to use that line too often. Thankfully, though, the convenience store did produce baseball cards in the '80s.

I'm a big Dave Kingman fan, so picking up these neat oddball of his for 18 cents was a no-brainer. (Seven of the eight cards you'll see here had the same 18-cent price tag.)

I'll always love those neon A's jerseys of the '80s. 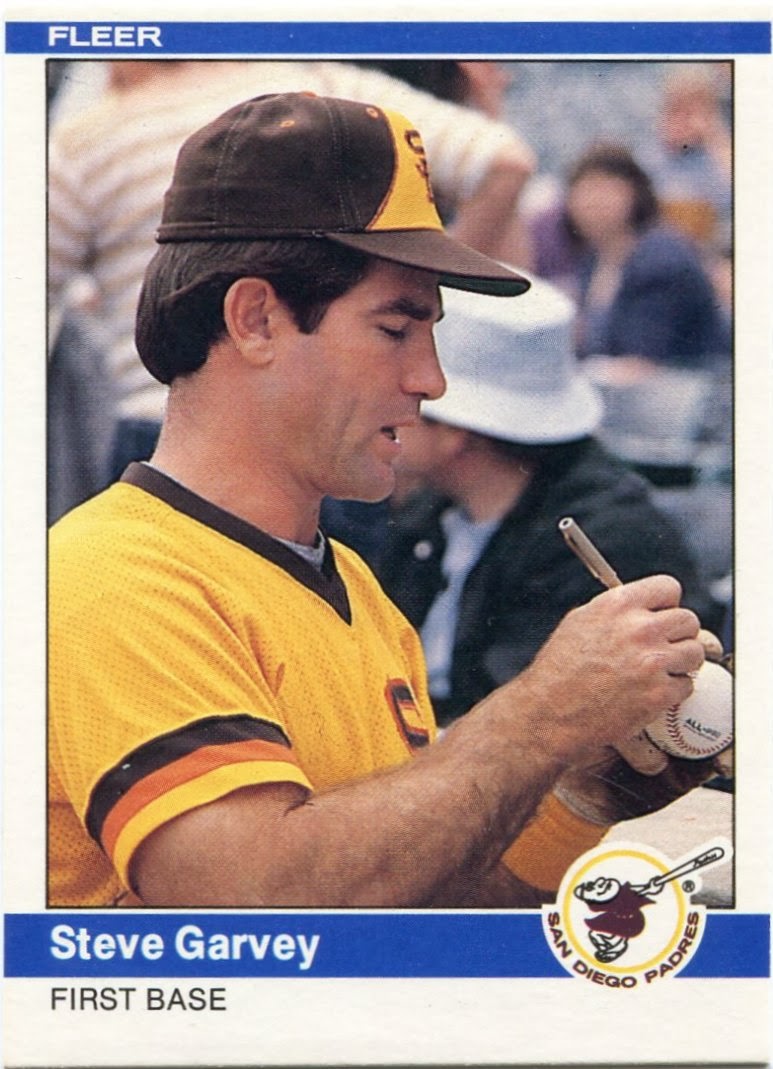 I feel a little odd including "Dime Box Dozen" needs in these impulse buys.

Since I originally made the list as a way for other people to help find cards I wanted, it almost feels like cheating.

In the end, though, the result is the same. Whether it's through Sportlots or a fellow blogger, I get the card I want, plain and simple.

This Garvey became a "Dime Box Dozen" need because of the nifty "autograph" shot. Plus, I've gone on record as saying that 1984 was Fleer's best year, by far.

Oh, and one more thing. 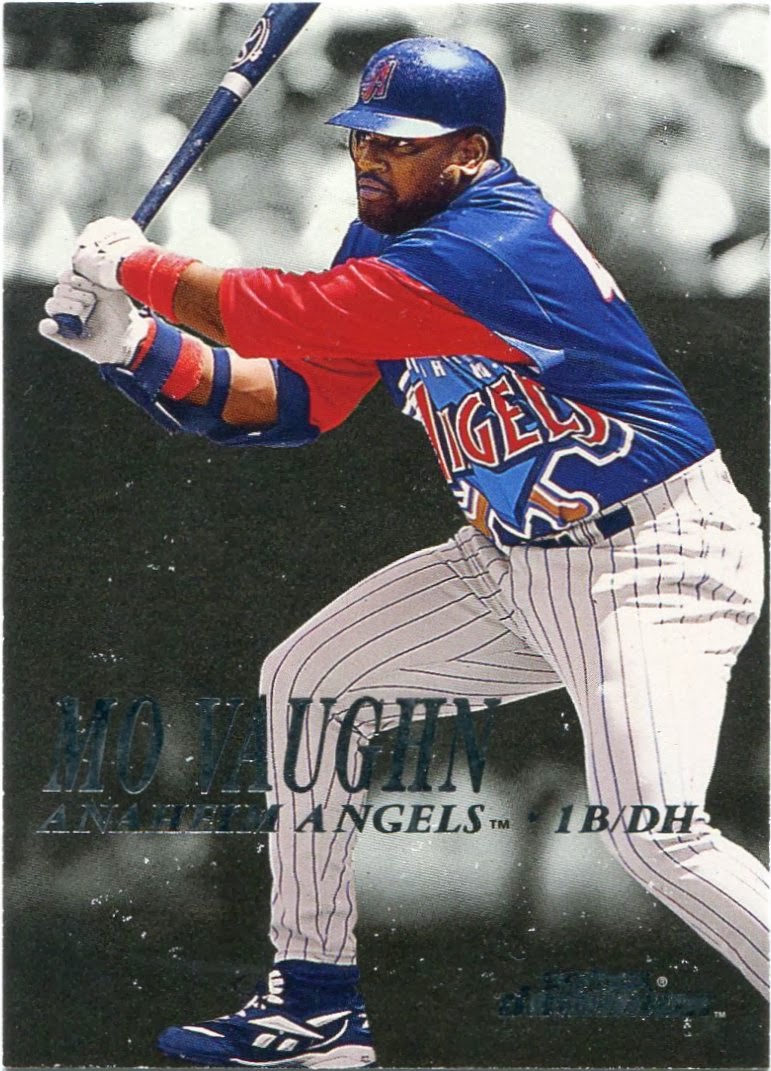 I'm collecting cards like these because of how ugly the uniforms are.

Frankly, I'm glad I don't remember MLB's "Turn Ahead the Clock" promotion from the late '90s and early 2000's. I can't imagine how embarrassing it must've been for the players to wear duds like those.

The promotion was so inexplicably bad, in fact, that I decided to start a mini-collection of them. Understandably, not many exist. Companies didn't want jerseys like that on their cards.

I was recently hipped to the existence of this Mo Vaughn, seen here in futuristic Angels garb. It's only the fifth "Turn Ahead the Clock" card I own. 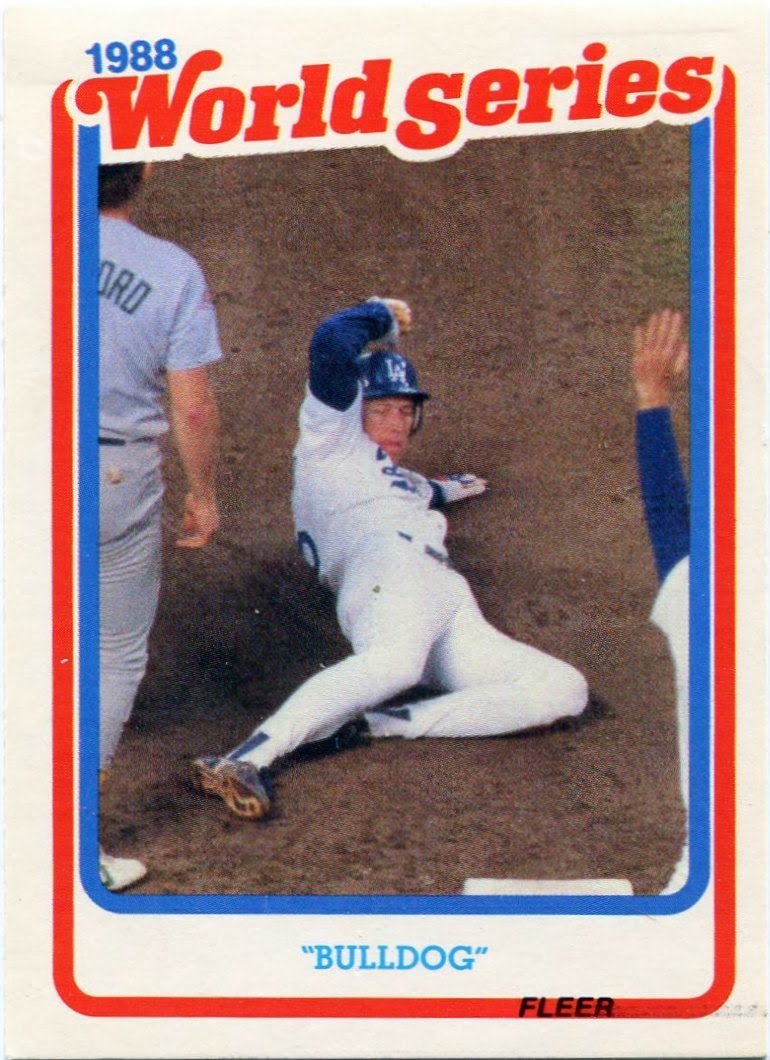 I've wanted this one ever since I saw it on Night Owl's blog, which was a while ago now. At least a year or two.

You don't see many shots of guys sliding into third in this hobby. Much less a pitcher. In a World Series game.

Game 2 of the 1989 Fall Classic was a magical one for Orel Hershiser. Not only did "Bulldog" pitch a three-hit shutout in that contest, but he also went 3-for-3 at the plate with two doubles, an RBI, and a run scored.

This shot Fleer used for this terrific card comes from the third inning of that contest, after Hershiser went first-to-third on a one-out single by Steve Sax. He'd score on a single by Franklin Stubbs, the very next batter.

"Bulldog" was at the top of his game that night. 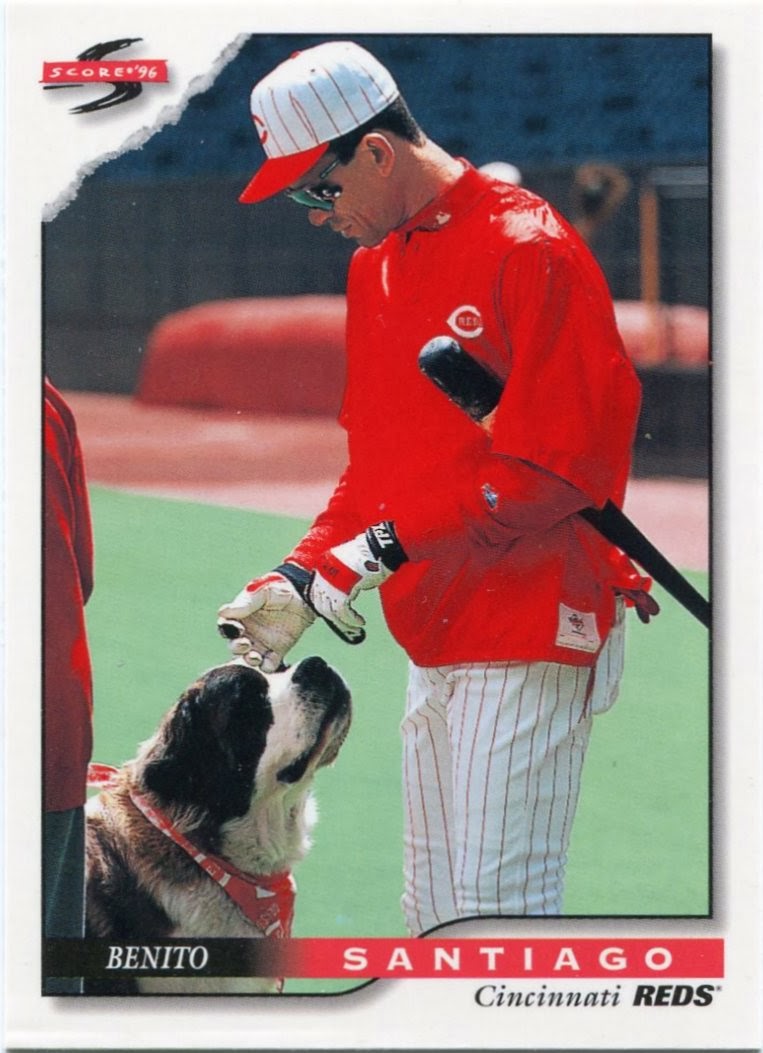 Speaking of dogs and all, here's a card that I didn't know existed until about a month ago.

It almost immediately became a  "Dime Box Dozen" need, the third and final piece from the list to be included in this impulse buy.

Since my mom works at an animal hospital, our furry friends have always been a big part of my life. I've done my best to track down every animal-based card ever printed.

Cards like these are why Score has become a bigger part of my radar in recent years.

I never know what I'll find next. 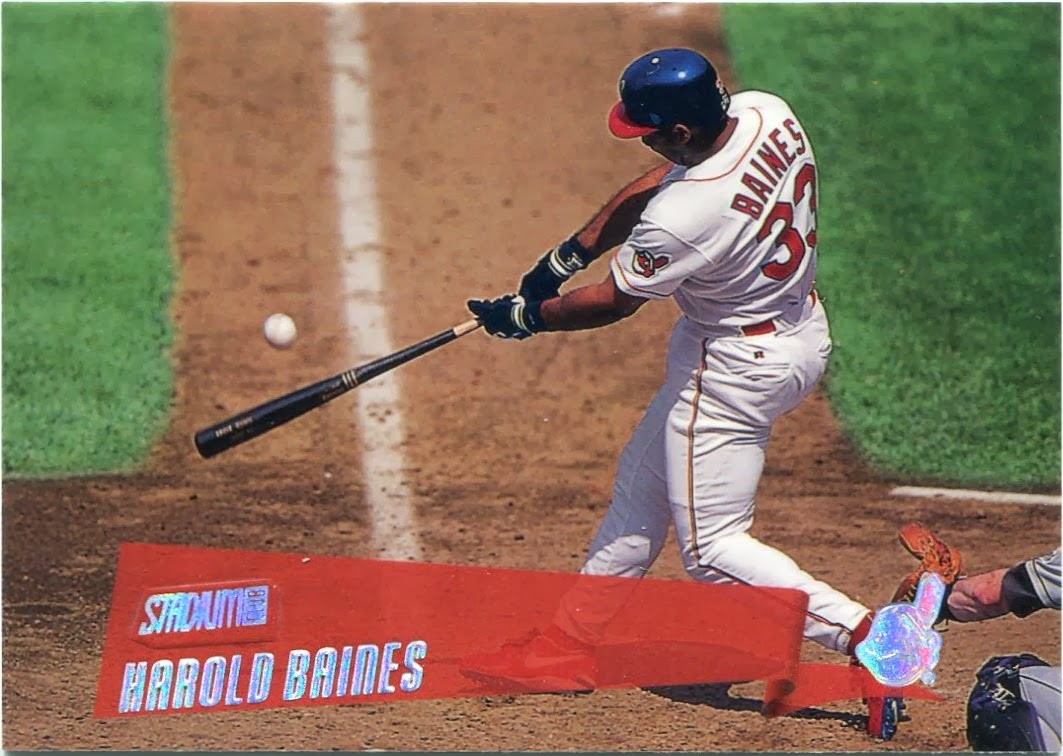 This is the card that triggered this impulse buy.

Yes, Stadium Club continued their trend of masterful photography with this beautiful landscape shot of Harold Baines at the plate. But that's not the real reason it was such a vital need of mine.

Baines was an Indian for all of 24 games in 1999. Acquired for Cleveland's pennant push, he'd hit .357 in the team's four-game loss to the Red Sox in the ALDS that year.

I've known that Baines was once a Cleveland Indian for a long time now. And I'd put all my effort into finding a card of him in the uniform all the while. After repeated attempts, I figured there weren't any printed.

Somehow, this 2000 Stadium Club single had flown under my radar all these years. I found it by accident during a little Internet surfing a few weeks ago. It was a tremendous honor to finally be able to add a Harold Baines card to my Indians binder.

It brought me one step closer to completing a "Short Term Stops" collection that can never be complete.

If that makes any sense. 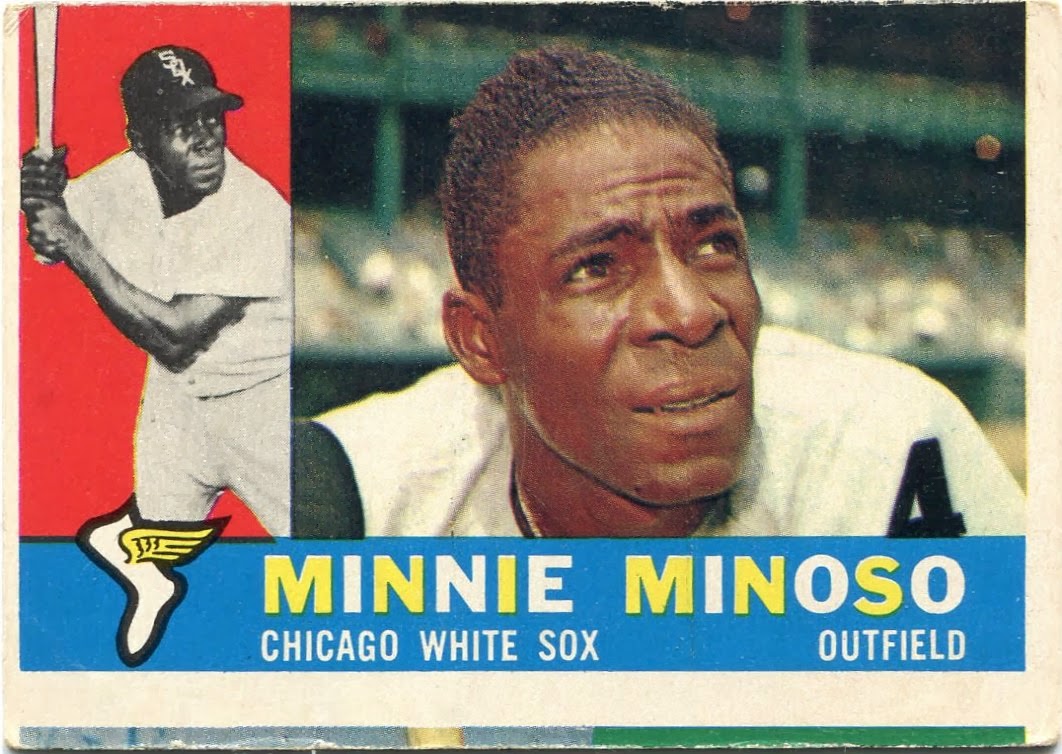 As great as all that is, though, how could such an awesome vintage card not top this list?

I noticed that one of the sellers from this particular order had a 1960 Topps Minnie Minoso available for a perfectly reasonable price of two dollars. Sportlots usually isn't my go-to place for vintage, put I couldn't let something like this go.

It's a pretty far off-center, but that doesn't bother me much. I'm now one card short of having a seven-year Topps run of Minoso's cardboard from 1958 to '64. I'm only missing his '61 Topps from that stretch. (It's an eight-year run if you count his famous '77 Topps "Record Breaker" card.)

If you ask me, vintage is a great way to cap off an impulse buy.

Maybe it'll happen someday. With a little effort, maybe I'll finally be able to get these impulse purchases under control.

Ah, just kidding. I pulled the trigger on another impulse buy yesterday. I don't know if it featured anything as good as a 1960 Minnie Minoso, but I'm definitely looking forward to receiving them in the mail.

A lot of the time, cardboard is the one impulse I don't want to control.
Posted by Nick at 5:35 PM

I've been a fan of the '83 Fleer set for a while as well, though it's been equal parts design and the fact that the Padres had those AWESOME uniforms. Not sarcastic, I think those things are great.

That Benito is awesome as well.

And I can always appreciate a post that quotes one of my top three favorite movies. Party on, dude.

I think I just sent you a 73 Kingman

Fun fact about Schottzie 2: In 1993, Bud Selig actually put an official ban on the dog from walking on the Reds' field thanks to prior incidents of defecation.

We definitely need to compare TAHTC "checklists" at some point. I think I've found 3 or 4 Turn Ahead cards so far. Sadly the Pirates crimson monstrosity never made it on cardboard.

I see 94 Topps Sandberg on your DB Dozen. I have an extra - I'll get a PWE out to you

I'm really liking that Harold Baines for some reason! Also, I think I need to work on my impulsive behavior. It's a tough thing to handle being a card collector!

Always was a big Baines fan. Not saying I have all his cards though I should. Either way this is a great find. One I'll be looking for. Great post.