Winter seems to be the season of repacks.

Of course, there's not a ton of exciting new products on the shelves this time of year. It's the offseason for card companies as well.

But, if you're anything like me, it's hard to walk away from the card aisle at the local big box store empty-handed. That's why I usually try to avoid going to my Target when my budget is low.

As I always say, repacks are the perfect cure for the winter months. With 100 cards for four bucks, it's about as good of a deal as you'll find.

A couple weeks ago, my dad was once again nice enough to treat me to a couple repacks from the local Target. As a result, I thought it'd be fun to wage a "repack war" between the two.

My scoring system won't really be structured in any way. I'll be throwing out or taking away points left and right at my own fancy.

The first repack got off to a great start. Mr. Longoria was one of the "cover boys" of it, if you will. Staring out at me from the little window of the container was this neat parallel from 2012 Heritage, a black-bordered variation that was only offered through retail rack packs.

Given their retail-only distribution, I have to think that these things are tough to find. That's what made finding this Longoria (the subject of one of my many player collections) so surprising. 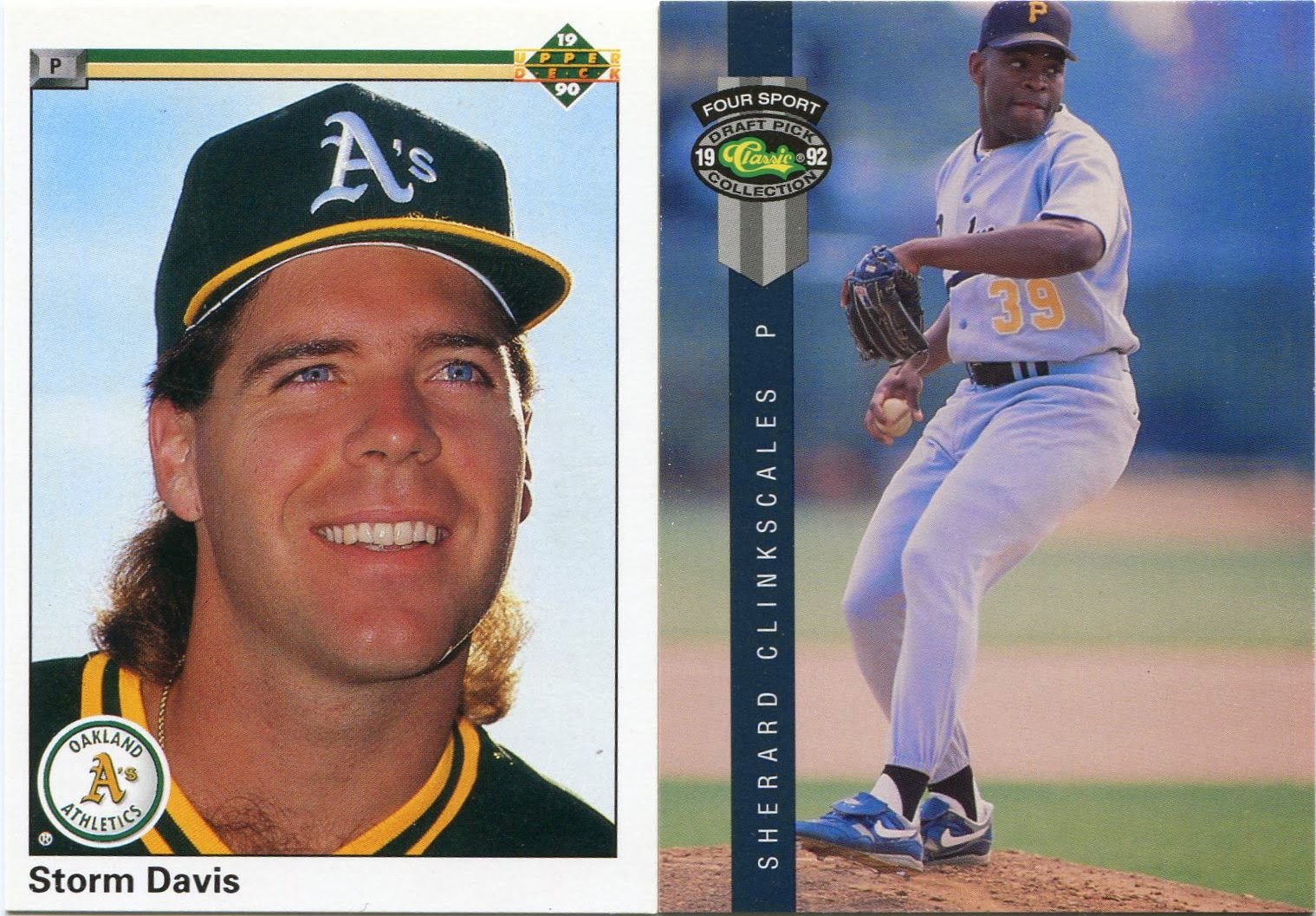 Though he never made it to the majors, Sherard Clinkscales has to be one of the greatest names in the history of organized baseball.

The mullet, on the other hand, has to be one of the worst fads to sweep through the game.

I'm glad that hairdo is a thing of the past. 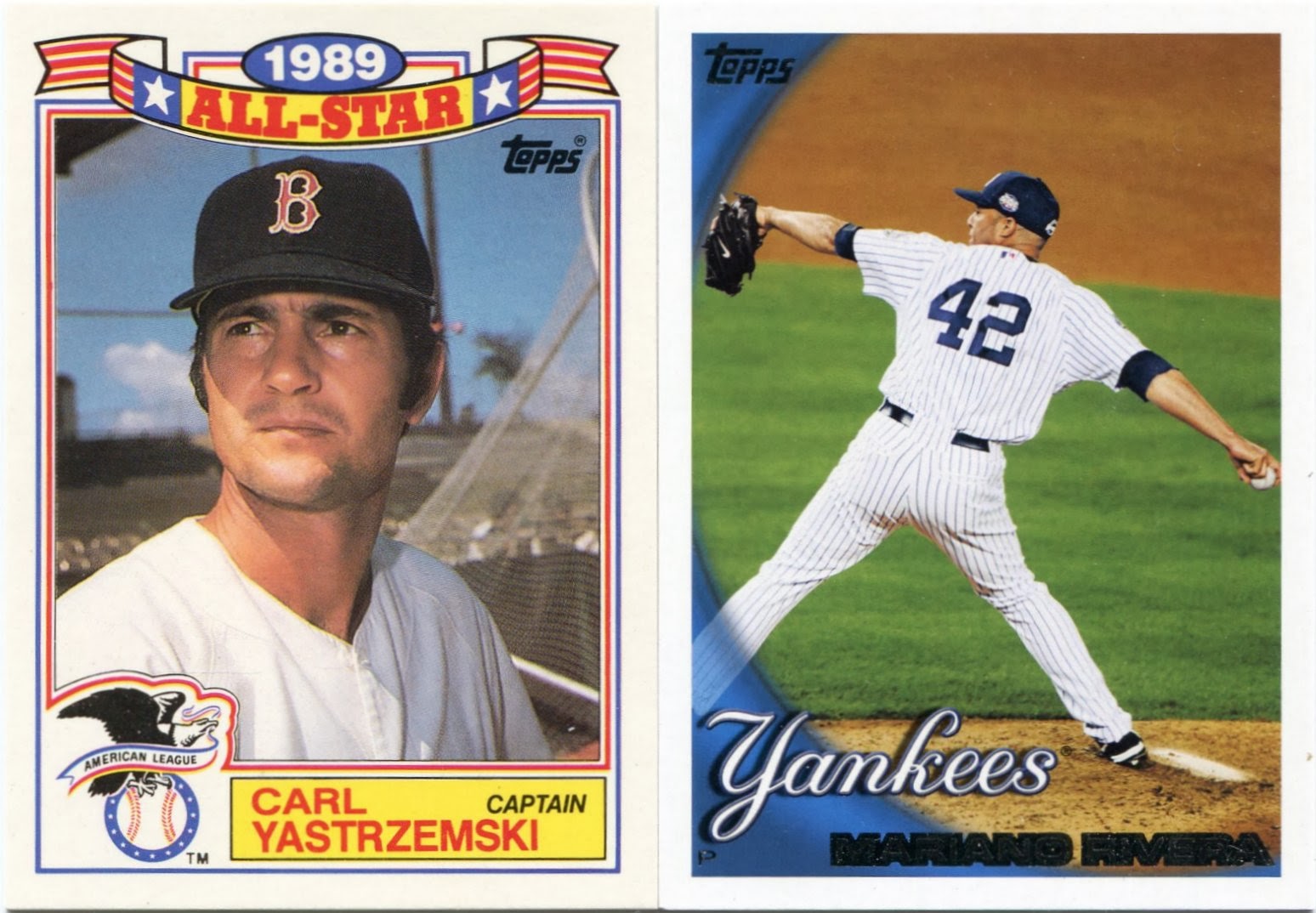 I'll be awarding points here based off the iconic numbers these legends wore throughout their respective careers. 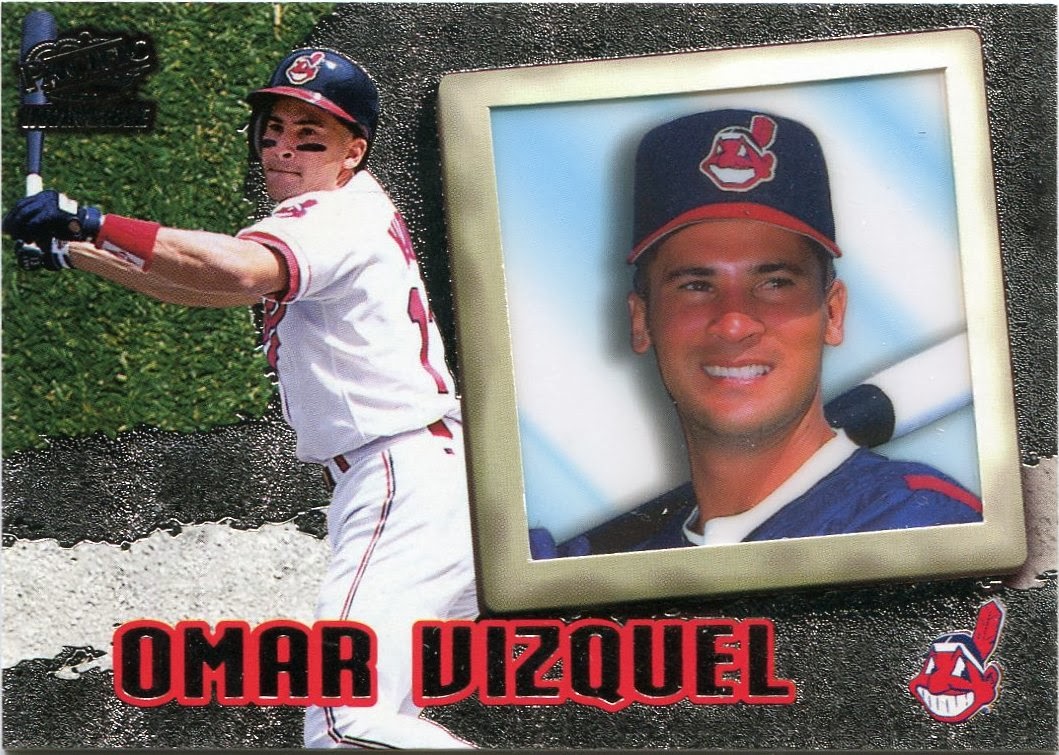 Other than Pinnacle, I think Pacific is the most underrated brand in card history.

Between ornaments and see-through paneling (as you'll find if you flip this Vizquel over), the company wasn't afraid to go a little outside-the-box with their creations.

While it's highly unlikely, I wouldn't mind seeing a Pacific revival one of these days.

As they say, three's a crowd.

I always love finding oddballs like these UK minis in repacks, but there's no reason for me to get triples.

This is getting out of hand. 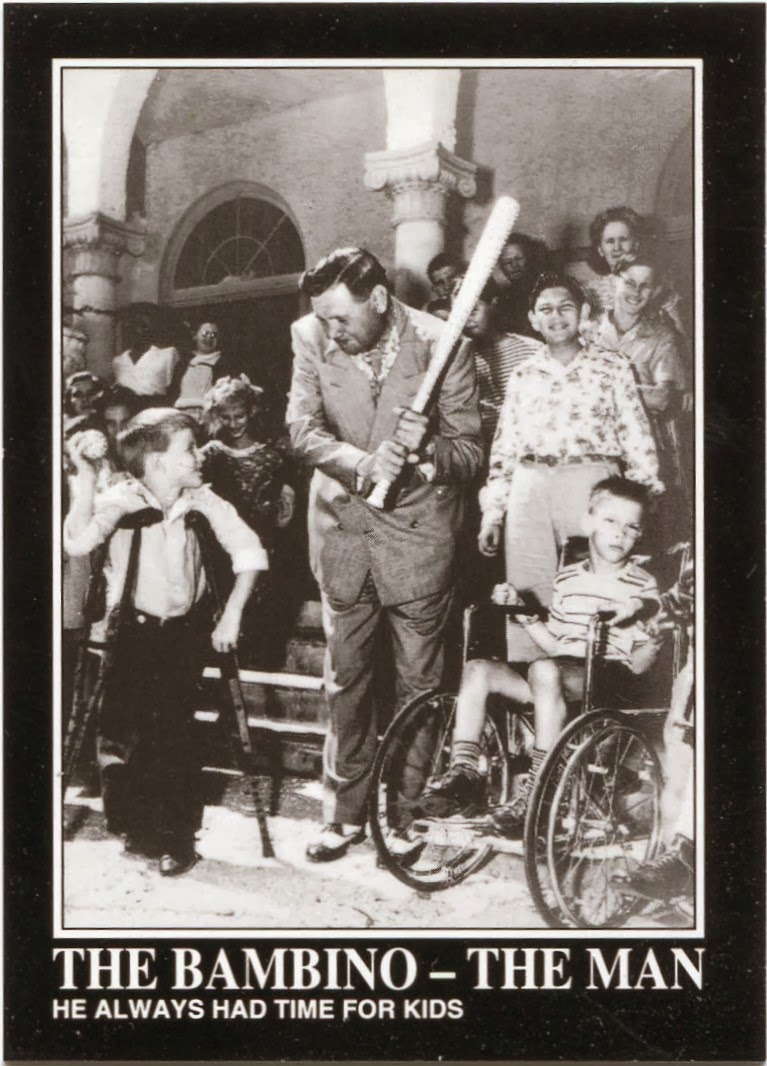 Luckily, this sweet Babe Ruth swooped in to save the day.

"The Great Bambino" may not have been the squeaky clean All-American hero he was portrayed to be back in the day, but he did always seem to have time for the fans.

I'll always be a fan of his for that. He was indeed "The Man".

Not only that, but this great card comes from the terrific Conlon brand, one of my personal favorites. They released an all-Babe Ruth set in 1992. Sure, one-player checklists may not be all that original.

But, if there's one guy who deserves it, it's Babe Ruth. 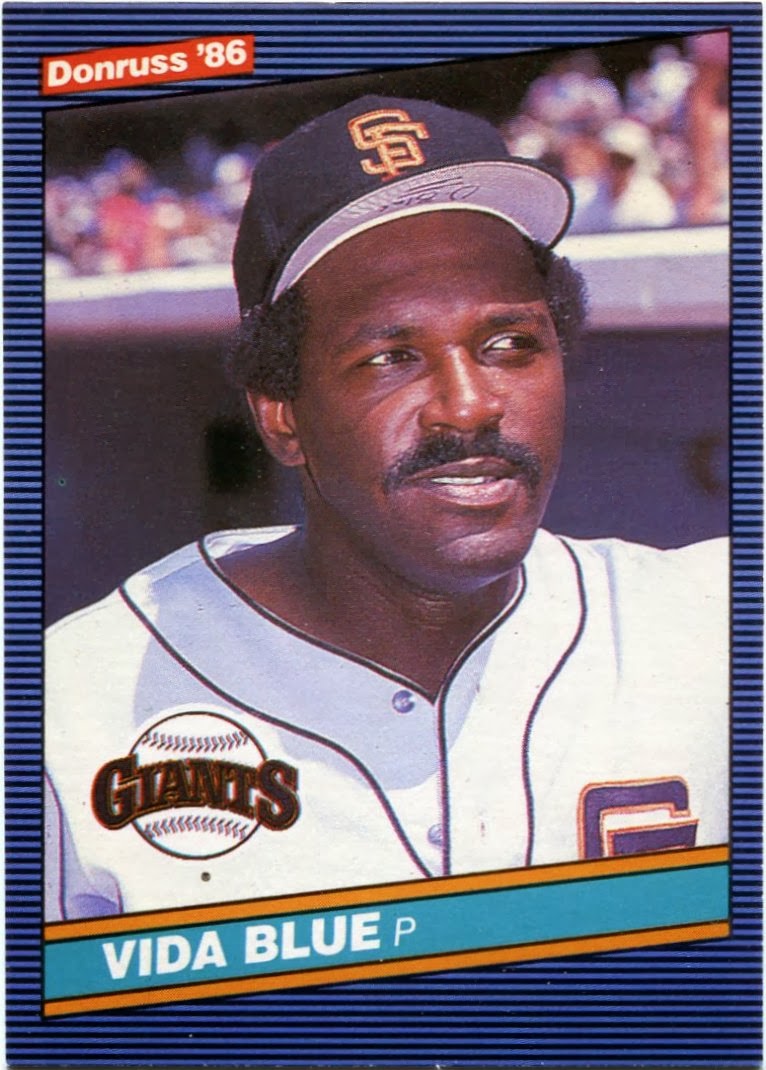 The second repack proved to be a worthy competitor.

Horrendous design aside, I was rather excited when this '86 Donruss Vida Blue fell out of its reaches. I own most of the major-brand cards from Blue's playing career, but this was one that had previously fallen through the cracks.

The repack gods were smiling down on me with this one. Like the Longoria from the initial one, these were both "cover boys" from repack #2.

The Smith is a beautiful "sunset" card from '97 Fleer, a set's that isn't widely discussed these days. I've always liked the simple design and the odd matte-like finish.

On the right is a neat 1998 Topps Chrome Fred McGriff, seen there in his (then) expansion Devil Rays duds. Though it didn't pay off, I thought it was cool that the Rays signed aging veterans like McGriff and Wade Boggs during their early years.

Should another expansion team ever pop up, I think that'd be a good idea in terms of drawing fan interest. 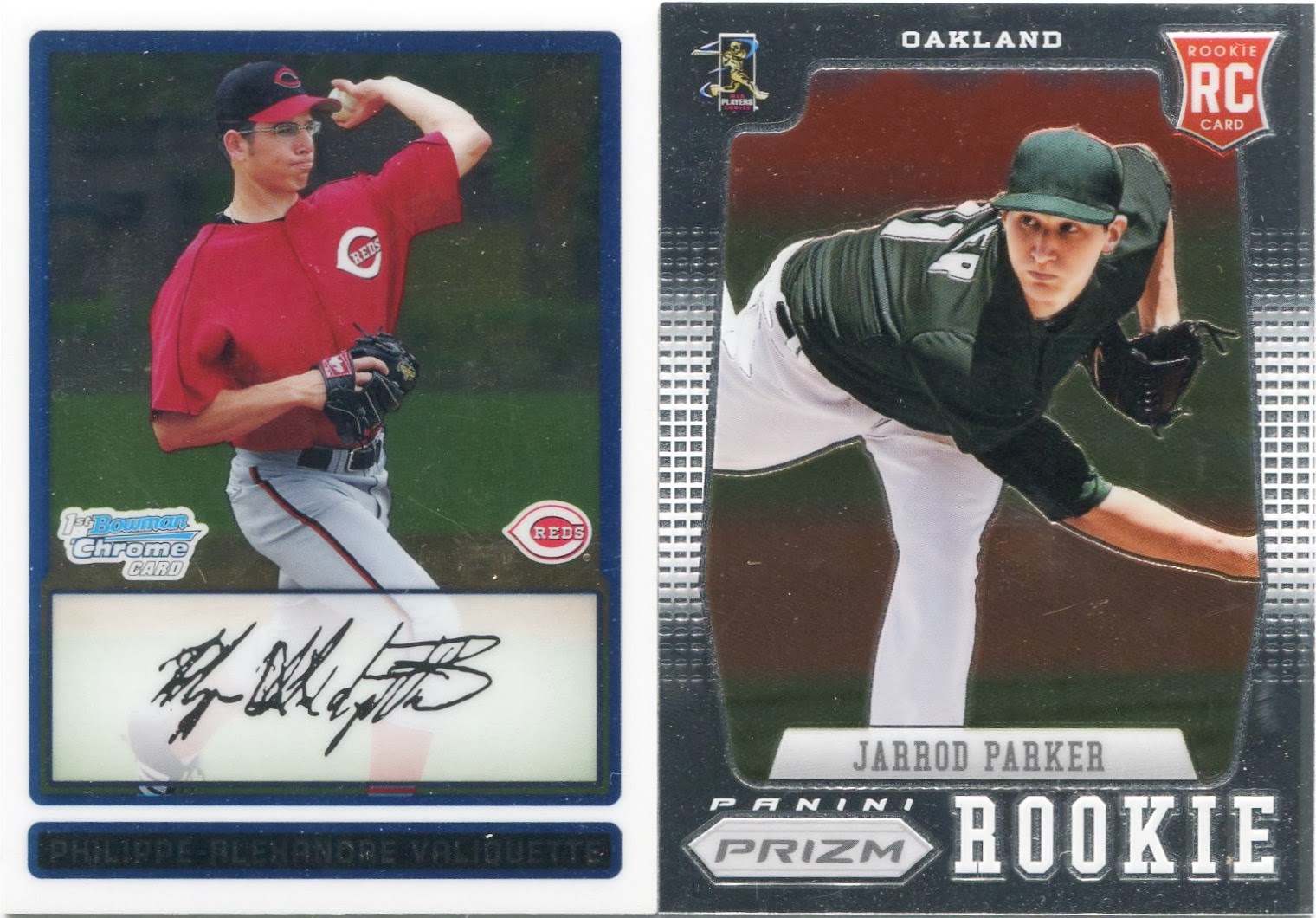 It's hard to see in the scan, but that Reds rookie has the longest name I've ever seen printed on a baseball card.

His full name is Philippe-Alexandre Valiquette. That's 27 letters. And, yes, he's from Canada. (Sadly, he never played in the bigs and wasn't even in organized baseball during 2013.)

I find it funny that singles from 2012 Panini Prizm are already making their way into repacks. They've been out for less than a year, and yet they're on the scrap heap. 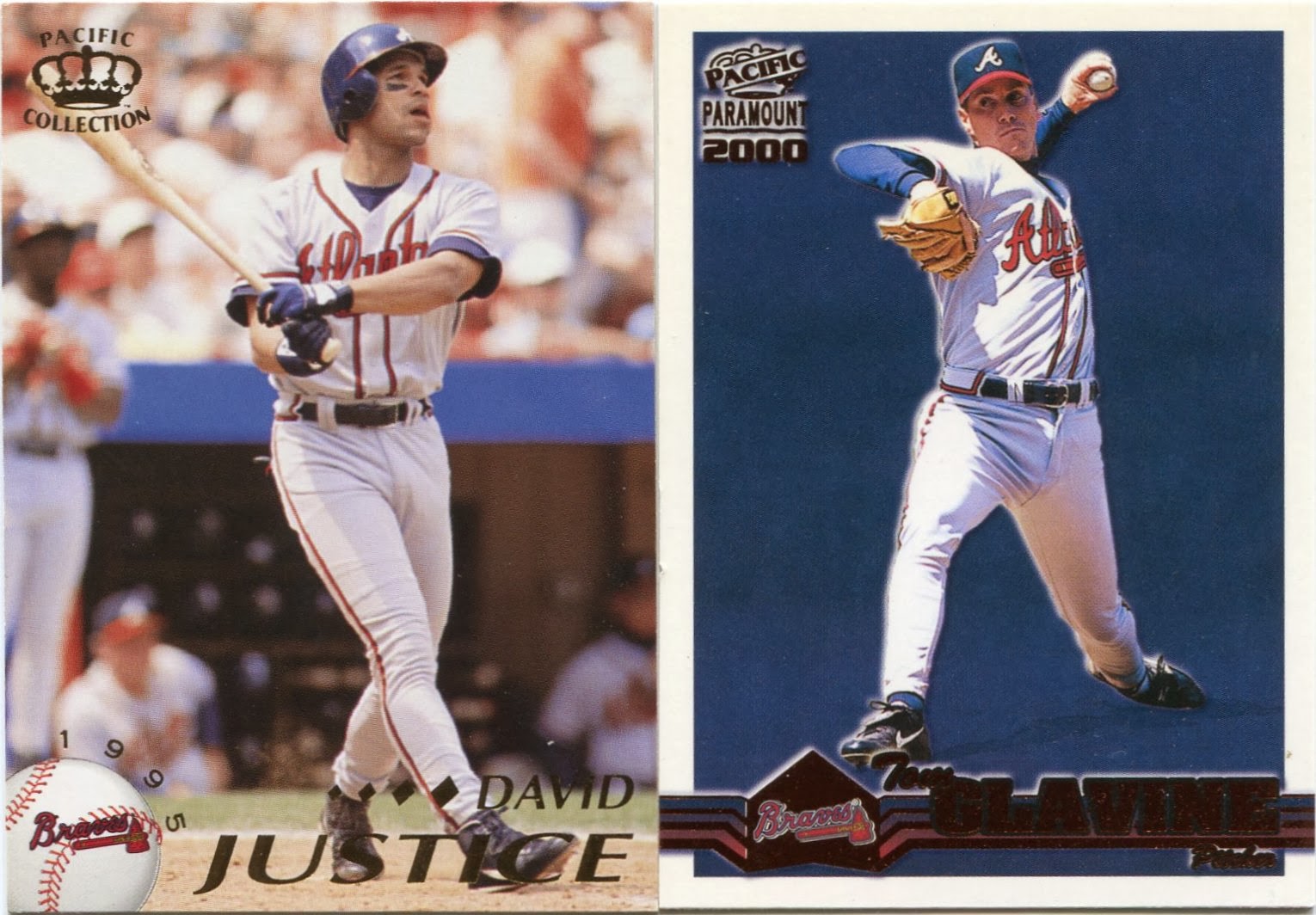 This repack offered double the fun as the first one. 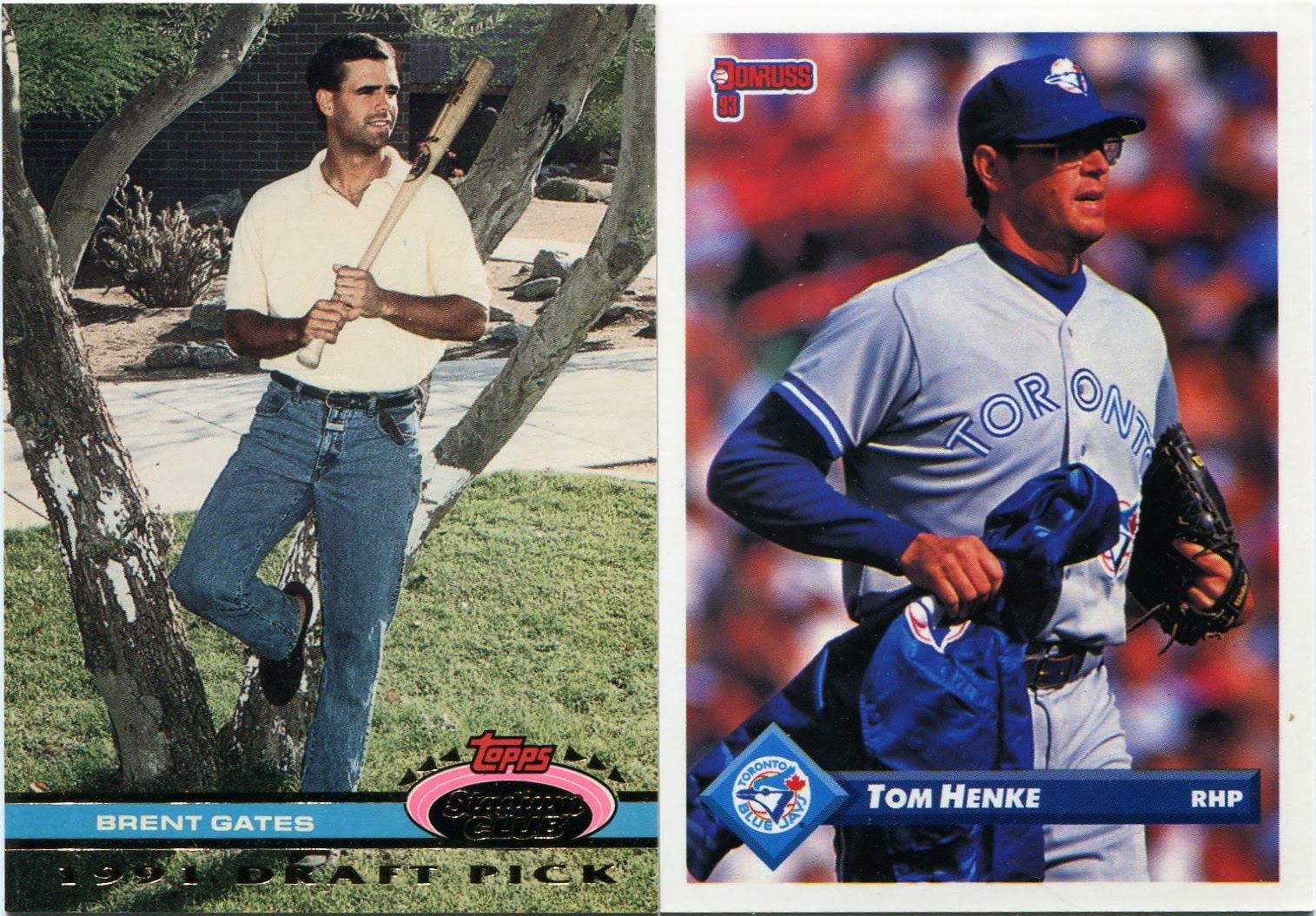 Stadium Club was great for a lot of reasons, but that Brent Gates isn't one of them.

That looks like a photo you'd see in a high school yearbook, not on a baseball card. Then again, it wouldn't be Stadium Club's first fashion faux-pas.

Meanwhile, Donruss gave this repack a bit of nostalgia with the bullpen jacket cameo on that '93 Henke. That's something you don't see in baseball these days.

I wish it'd come back. 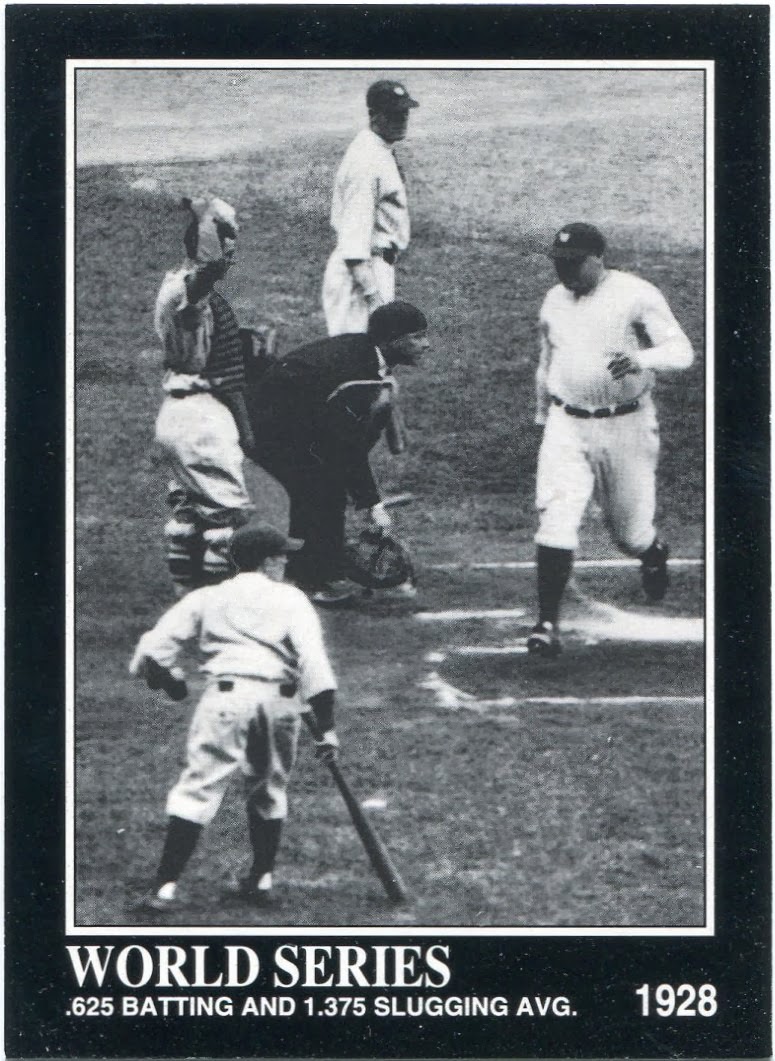 I'm guessing some of the cards included in this repack came from the same source.

Not only were cool Pacific cards featured in both, but I also found another Conlon Babe Ruth single in this repack as well. This one comes with an outstanding action photo of the "Bambino".

Not to mention a lurking Lou Gehrig, too.

As far as singles go, that just about wraps things up.

But these repacks had a special little bonus in store for me. 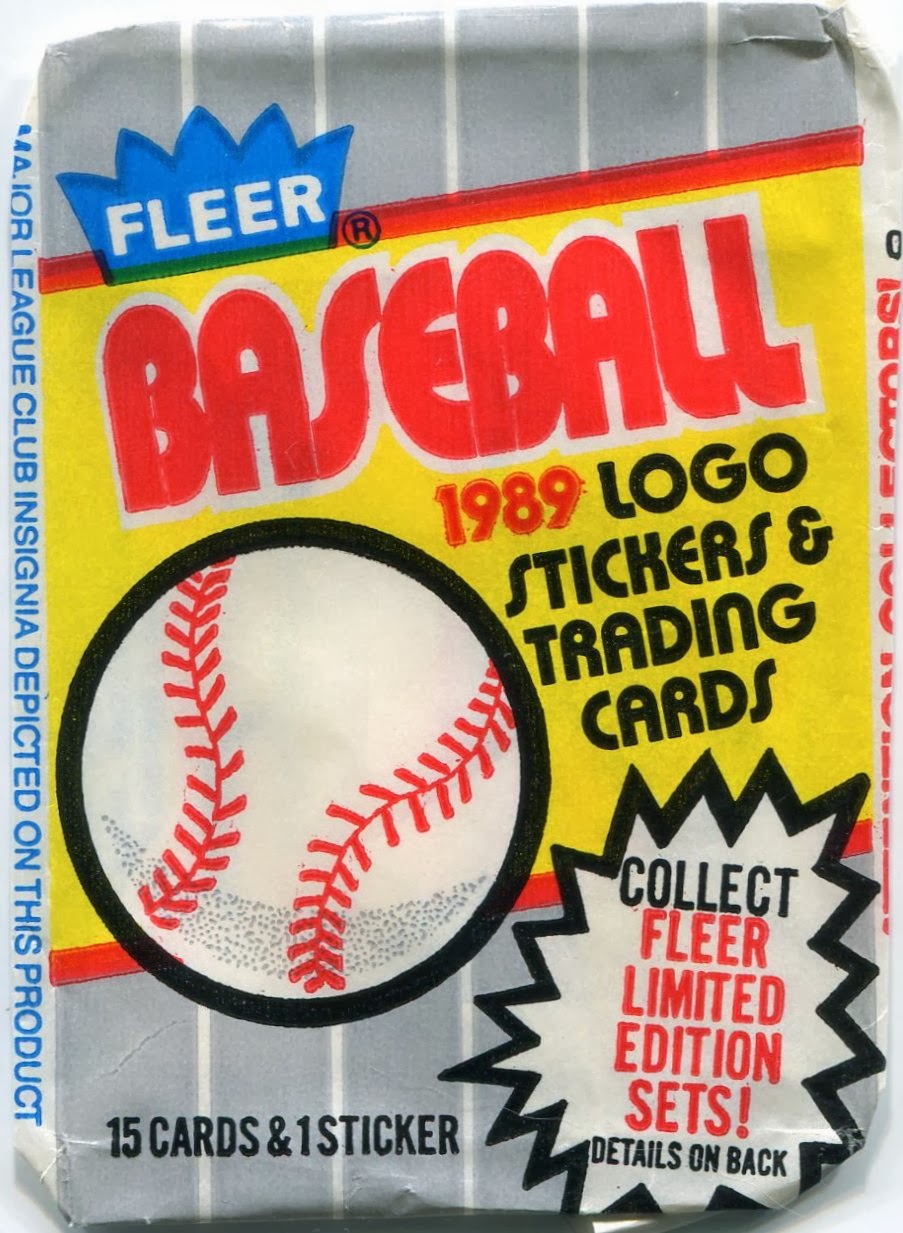 In addition to the usual mess of singles, both came with two unopened packs.

The first bit of wax came courtesy of 1989 Fleer. It's perhaps one of the uglier sets ever made, but ripping a pack of these things was still pretty entertaining.

I'll be awarding ten bonus points to the repack which featured the better mix of '89 Fleer. 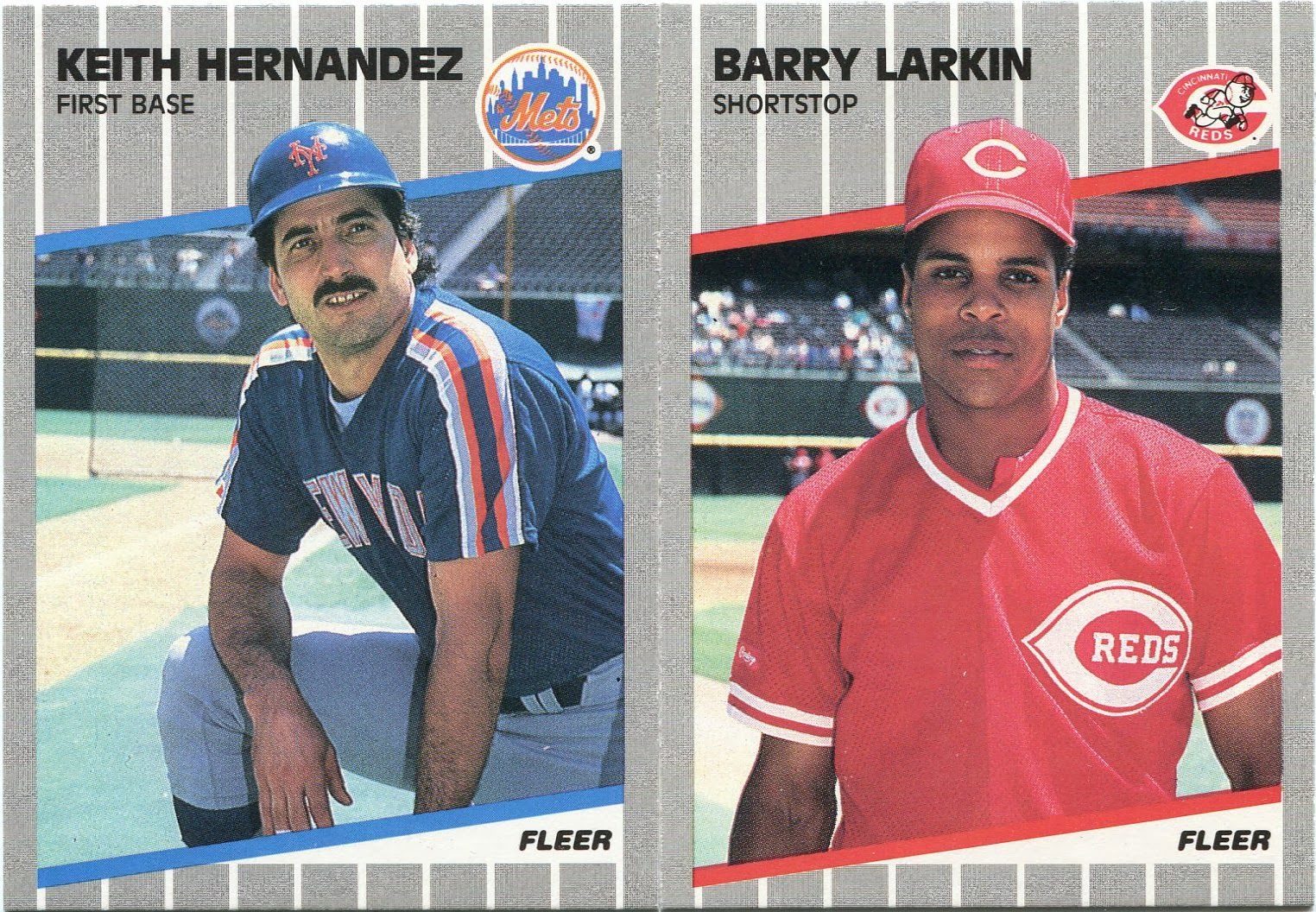 There weren't any Bill Ripkens this time around, but the pack from the first repack did feature a nice mix of big names.

Among the gets were the Keith Hernandez and Barry Larkin singles you see above. 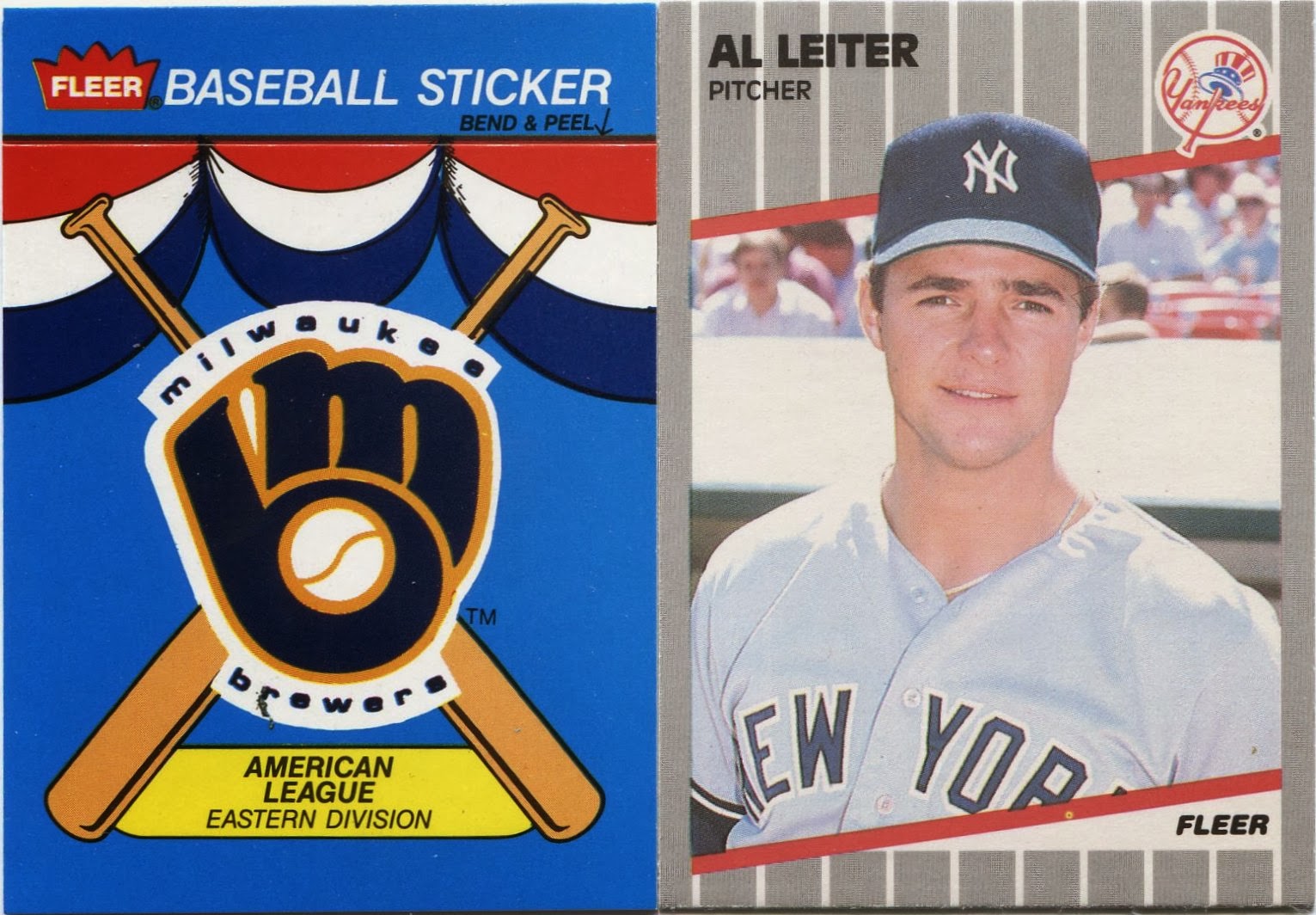 That's more than I can say about the second pack.

A Brewers sticker and an early Al Leiter card were about all this one had to offer.

I have to give the nod to repack #1 here. 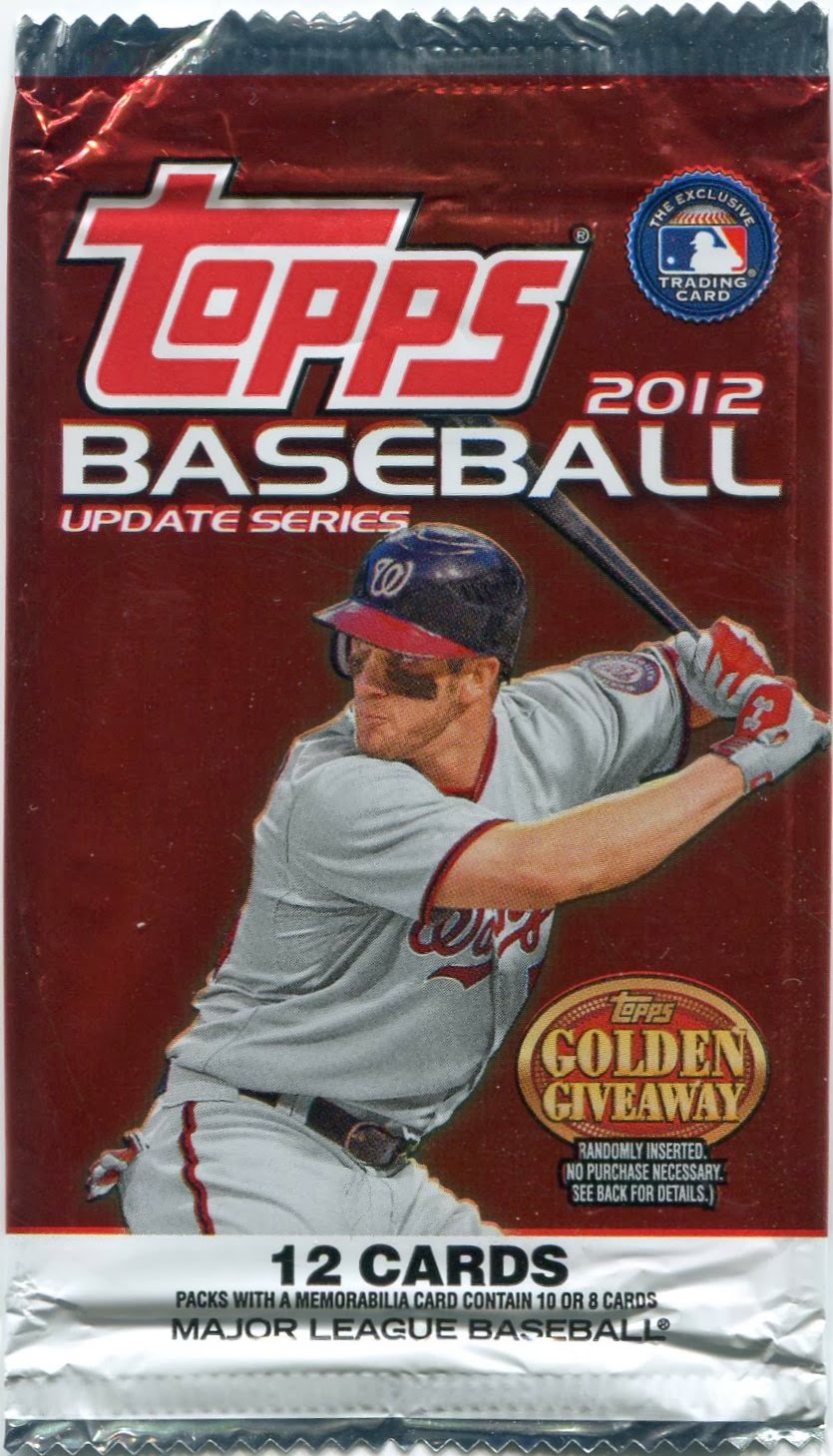 It all comes down to this.

After an intense battle, the better pack of 2012 Topps Update will determine who emerges victorious from the "repack wars".

Again, ten bonus points will be awarded to the winner.

Let's have a look. 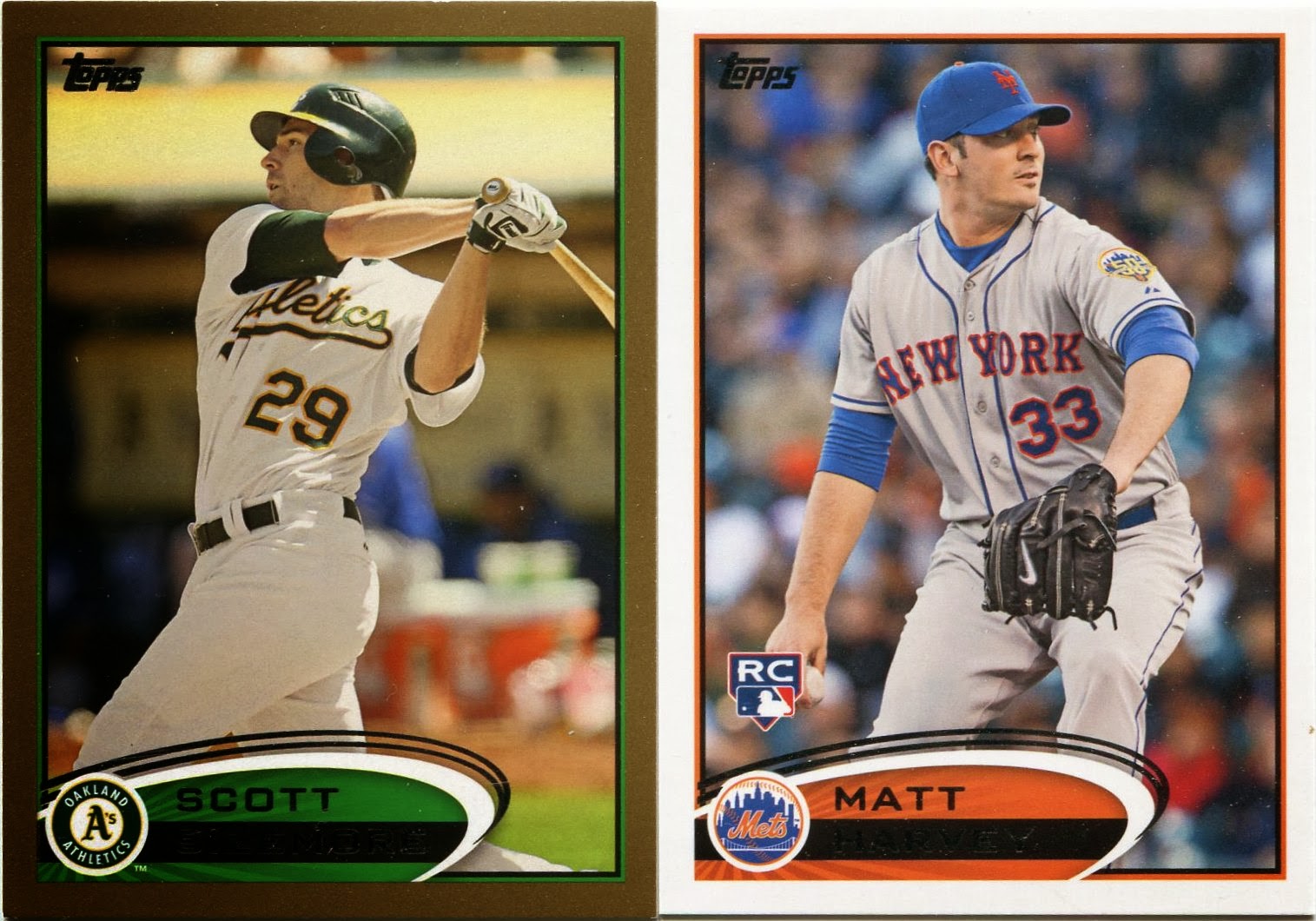 The pack in repack #1 was a bit underwhelming.

Still, although I don't collect Scott Sizemore, gold parallels are always neat. And, even though I'd already had a copy of that Matt Harvey rookie, it was still a nice pull.

Aside from that, though, this pack of 2012 Update didn't have much to offer.

It would take a grand collapse from repack #2 to blow this. 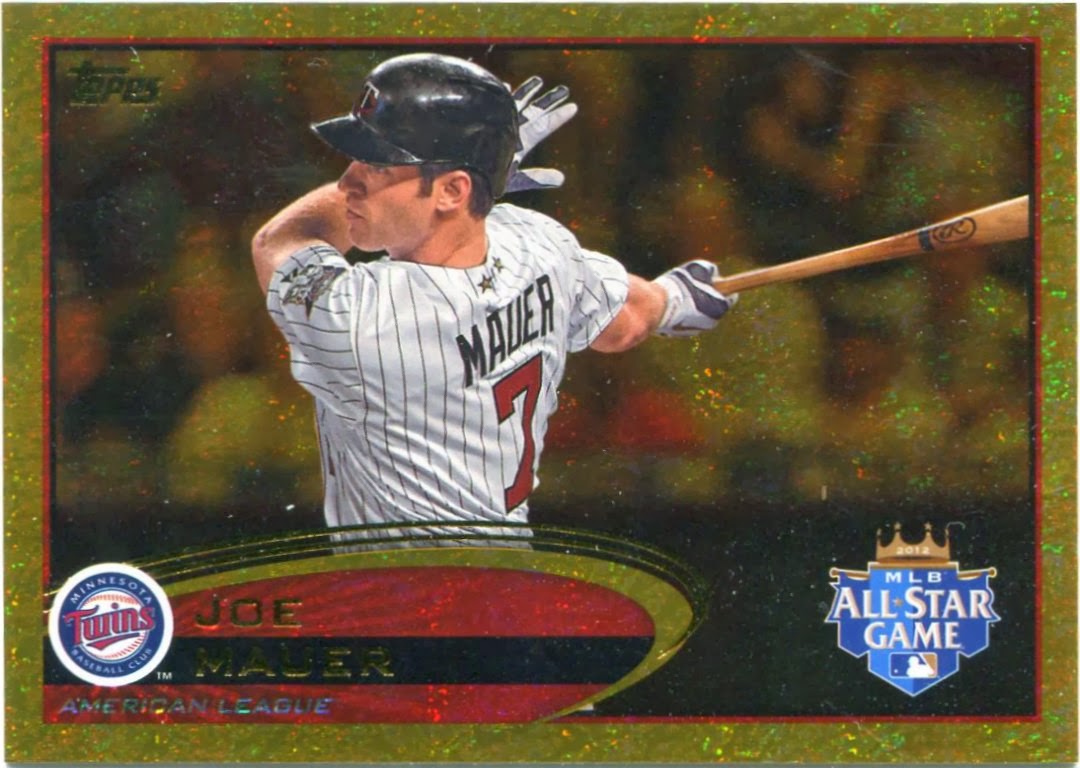 Heck, with yet another slew of repack goodness, I guess I was the real winner of these repack wars.
Posted by Nick at 6:46 PM

Those $4 Target jobs have become some of my favorites. Decent price, decent upside. The '97 Fleer Ozzie is probably my favorite from the battle.

Incidentally, if you don't already have it, you're soon to receive what is likely to become your new favorite card from that Ruth set.

BTW, I still need that Harvey if you're looking for someone's pile to throw it on... Just sayin'.

"They've been out for less than a year, and yet they're on the scrap heap."

Cuz they be shit, that's why.

I need that Harvey RC so bad. Nice stuff though Nick.

Thank you for finally speaking up for Pacific. I absolutely LOVE that brand. The base cards in most sets are boring, but the inserts are fantastic. Another that often gets overlooked about Pacific is their player selection is usually unique. There are several players on the Rockies (and every other team for that matter) that only got a card because of Pacific. They'll never be back in MLB though after the Sosa cork incident.

I believe that Glavine from Pacific Paramount 2000 is a red-foil parallel.

I think that deserves more than 5 points.

I always liked Pacific too. Several years ago I stumbled across a few stores that had tons of boxes of the stuff and I went a little wild. Loved it.

I've actually been refraining from buying those Target repacks because I'm trying to avoid packs of 1989 Fleer.
I did buy some 20-card repacks at the Dollar Tree and they have some 2013 Topps in them.