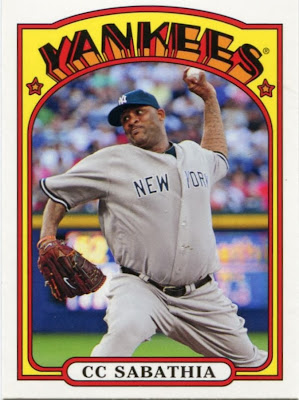 December 31st always seems to put me in flashback mode.

Just like every New Year's Eve, I find myself looking back at how the year has treated me.

One such area I look at is the world of cardboard. I've already done so by ranking individual sets and nominating the top ten cards of the year.

On the last day of the year, though, I like looking at the past twelve months as a whole and seeing what the ups and downs were. All things considered, 2013 had its fair share of high and low points.

Because I'd like to save best for last, we'll be addressing the "downs" of the year first. I like to maintain a positive attitude towards this hobby, but 2013 had a few low points that even I couldn't ignore.

I was rather fond of this year's 1972 minis. I'm a little less optimistic towards the 1989 mini insert set that is slated to come out in 2014. I sure hope I'm not putting those on the "downs" part of this list come next year.

Still, Topps and the whole retro phenomenon seem to have a complicated relationship. 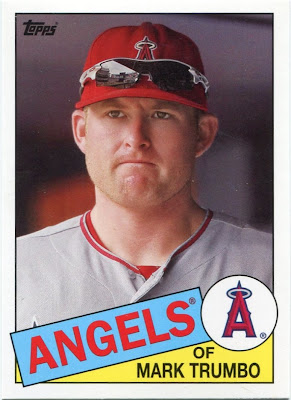 Sets like Heritage and Fan Favorites remain some of my all-time favorite brands.

In today's hobby, though, Topps is seriously overdoing the whole retro craze. It's just pure overkill on their part.

The Flagship minis are nice because they're a relatively small sample size. But with a throwback set like Heritage on the shelves, there's really no need for something like Archives.

I'm afraid that if this overkill continues, Topps will eventually make me apathetic towards every retro-related card out there.

That would be awful. 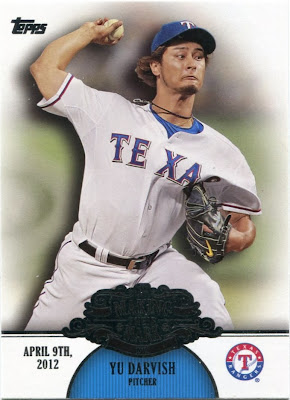 Like much of the party population on New Year's Eve, Topps doesn't seem to know their limit.

If they find one thing the collecting world likes, they just keep churning out more and more of it until the bottom falls out.

That's definitely become the case with the sheer number of inserts these days. I don't have the exact number in front of me, but I'd imagine Flagship alone featured at least a dozen different insert sets.

With a base-centered release like that, it's quite unnecessary. Pulling three or four different inserts from an eight-card pack doesn't give me bang for my buck, Topps.

Like the retro thing, though, I enjoy inserts. Despite my base card mentality, I get a special kind of thrill from pulling a nice one from a pack.

When they're as forced as pointless as these "Making Their Mark" singles, though, that thrill is gone. Did anyone honestly care about these things?

It's just an excuse to get another Yu Darvish card onto the market. 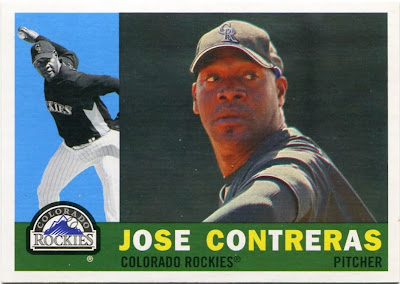 As you probably know, this one isn't anything new.

Greed has simply overrun this hobby in recent years, leaving most of us "small-time" collectors in the dust.

My card budget is probably a small fraction of what a lot of other people spend on this hobby. Hence, Topps tries to market many of their sets towards those high rollers.

Normally, I would just ignore it and move on. Even if I had the money, I wouldn't get much of a kick from those high-end thingies.

However, a lot of the greed is indeed hurting the little guys and gals in this hobby.

I'll say this until I'm blue in the face, but I think the market really needs a licensed 99-cent-a-pack set like Topps Total on the shelves. If Topps could throw out a mid-level brand like Archives and usher something like that in, I think it could have great long-term benefits.

That probably isn't going to happen anytime soon, though.

Perhaps even worse is the fact that Topps had what I felt was a million-dollar idea with Heritage High Numbers a few years ago. As sort of a compliment to Update, I loved busting packs of those during both 2008 and 2009. (I bought High Numbers hobby boxes both years, in fact.)

Yes, the High Numbers brand is still around. But you have to drop 100 bucks on the "limited edition" 100-card set (plus a hallowed autograph) to get some for yourself. I don't have that kind of money.

The worst part is that there are quite a few cards in this year's High Numbers checklist that I want. Chances are slim that I'll ever own them, though.

When the original version of High Numbers was on the shelves, Topps seemed to actually care about people like me. People who could get excited over the only card ever produced of Jose Contreras as a Rockie.

I'm not so sure anymore. 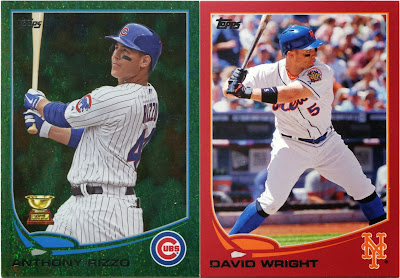 Well, now that my rants are over, it's time to finally look at the good the hobby produced in 2013.

As far as I'm concerned, there was a lot to like.

I've already said this on many occasions around here during the course of the year, but it bears mentioning again.

Topps absolutely knocked it out of the park with their parallels this year.

Between the emeralds, reds, blues, camos, pinks, and others, they were almost all beautiful. It's the best parallel effort Topps has put forth in a while, and maybe ever.

They fit well with my binder loving ways, as getting multiple variations of the same card often looks absolutely spectacular in a nine-pocket page.

While I'm still a little skeptical about the 2014 design, I can't wait to see what kind of parallels Topps has in store for us next year. 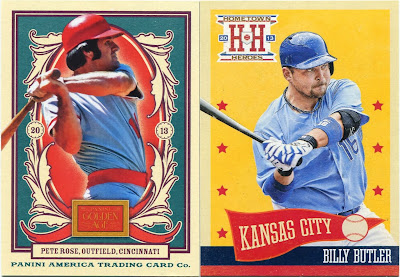 Once again, this is something I've been raving about all year.

I probably first heard about Panini in either late 2011 or early 2012. They were just getting into the baseball card market at that point. Honestly, I didn't think they'd last very long.

They proceeded to blow me away with their 2012 Triple Play, Golden Age, and Cooperstown releases. Even then, though, I still wasn't convinced that they'd be able to maintain it over the long haul.

Well, all Panini did in 2013 was produce what I felt to be three of the five best sets of the year. Hometown Heroes, Cooperstown, and Golden Age were some of the best unlicensed efforts in the history of the hobby.

They even have a Donruss revival on tap for 2014. I'm already getting excited for that. If it's anything like what they did in 2013, I think we'll be in for a treat.

Panini is here to stay. 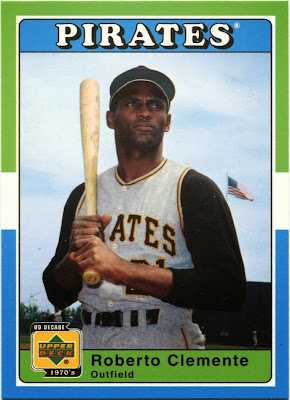 Up #3 -- The joy of blogging continues

This doesn't really have anything to do with Topps or Panini, but it still ranks as my greatest "up" of the year.

When I first started blogging, I wasn't sure how long I'd be able to stick with it. I honestly almost gave it up after a couple days.

And, just recently, a year turned into two years.

I can't believe it myself, but this is indeed year two of "Dime Boxes".

The major card companies have kept me interested enough in new product to keep me posting about those on a regular basis. I'm constantly finding little nuances in my own collection that I love sharing around here.

But, most of all, my fellow bloggers have made me feel welcome in the blogosphere. It's been a great year for readership and comments around here.

People keep constantly sending me great new cards with almost no urging on my part, something for which I'm greatly appreciative.

Of course, all of you out there keep writing great material for me to read on a daily basis, topics which allow me to appreciate my collection in a whole new light.

So, for about the millionth time, thank you, fellow bloggers and readers.

And, just because this is the last post of the year, I figured we might as well close out 2013 by honoring my all-time favorite player, Roberto Clemente.

As long as awesome cards like these are around, I'll keep collecting them.

Have a safe and happy new year.
Posted by Nick at 4:24 PM

Happy New Year to you, too, Nick!
I agree with you about the 99-cent-a-pack set. ... something different than Opening Day. I'm afraid we'll never see it though.

I was able to pick up my one Giants Heritage high number need on Just Commons for a reasonable price - you may want to check it out.