The dime box frankenset, Numbers 1-99: Top 5 that missed the cut 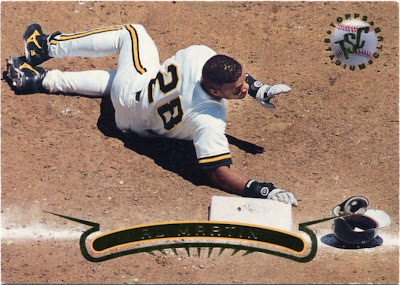 I'm excited to report that we're pretty much through the first 100 cards from my self-labeled "Dime Box Frankenset".

I've decided to whip up a few special "intermission" posts every time we go through 100 new pieces from my little project.

This afternoon, we'll be taking a look at the five best nominees that missed the cut from numbers 1-99.

Unfortunately, not every great card can make the frankenset binders. Sometimes, the competition is just too stiff at a certain slot.

That was certainly the case with the five cards you're about to see. Make that six, if you include the terrific Al Martin (above) that didn't rank in this post.

Let's take a look at the five best pieces that missed the cut from cards 1-99. 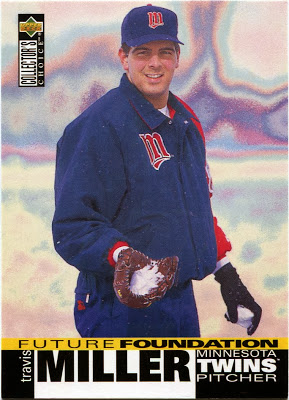 Page 5 proved to be an intense spot for a lot of frankenset nominees.

Three of the five cards you'll see in this post fall in between the numbers 37 and 45. Card companies seem to like to put great shots in those slots.

I can count the number of snow-themed cards I've seen on one hand. If I'm remembering correctly, I think I own one other one. And that one made the frankenset.

Mr. Miller, sadly, did not. It's a terrific card with an ultra-psychedelic backdrop.

In the end, though, a card of a pitcher literally sinking his teeth into a bat was just too much. 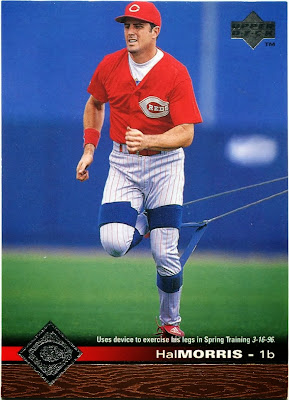 This was a tough call.

My love for 1997 Upper Deck and its great photography (as well as its innovative game-dating theme) has been well-documented on this blog. Hal Morris and his stretching technique is another wonderful chapter in that saga.

However, in a decision that took a good while of staring and contemplating, I went with the terrific "play at the plate" Jennings over this one. Last year's Flagship included a ton of great photography. Mr. Jennings was near the top of the fold in 2012.

Since his standard base Topps issue missed the cut, his Chrome variation was free for inclusion in the frankenset.

Jennings just edged out Hal Morris in this battle. 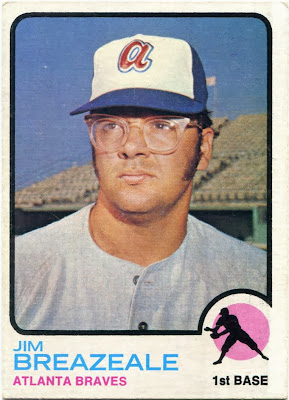 Up next is one of the greatest "specs" shots you'll ever see.

Interestingly enough, this is the first and only Topps baseball card of Jim Breazeale. And he had to live through the indignity of wearing those hilarious glasses on it.

As great as they are, I had to give the nod to one of my all-time favorite "play at the plate" shots with the Servais.

Frankenset or not, though, Breazeale's shades will always live on in glorious infamy. 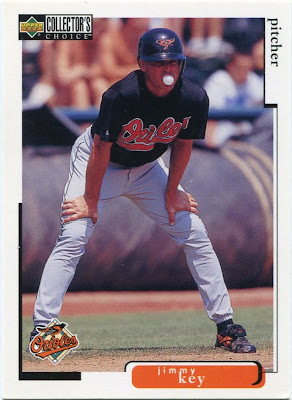 Had this card had almost any other number, it would've been a lock to make my frankenset.

Shots of guys leading off third are a rare sight in this hobby. This one features Jimmy Key, a pitcher. An American League pitcher, at that. And, to top it all off, he's blowing a bubble!

That's a whole lot of awesomeness on one baseball card.

Unfortunately for Key, though, he had to go against one of the most spectacular "double dip" shots ever made with the '73 Topps Andrews. I couldn't go against the vintagey goodness of that one.

I'm still shocked Jimmy Key is on the outside looking in with this frankenset. 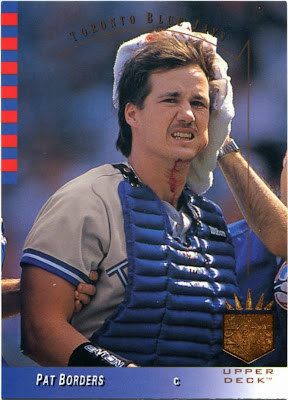 To close things out, we come to the toughest frankenset decision I've had to make thus far.

Today is the third time I've shown this '93 SP Pat Borders on this blog, which is pretty remarkable considering I've only owned it for a little over a month now.

That alone should tell you how much I like this rather painful shot of the former Blue Jay backstop.

Still, there's just something about the Wathan that has quickly made it one of my favorite frankenset cards. It's probably the fact that the spectacular "play at the plate" shot comes from '81 Fleer, a rather lackluster set in terms of photography.

Still, I doubt this is the last time you'll see the Borders on this blog.

Leaving out that Pat Borders card had to be a tough call. That is a gem.