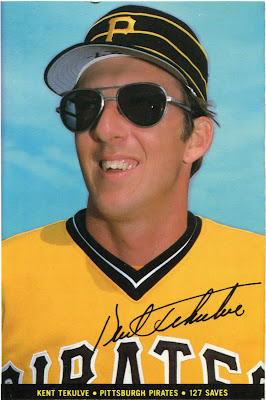 I don't know about the rest of you out there, but one of my biggest challenges as a blogger is coming up with a somewhat catchy title for my posts.

There are times when I'll breeze through an entire write-up, yet not be able to come up with a good title to save my life. Sometimes, it takes me just as much time as writing the post itself.

That's the challenge I faced with what you're reading right now. I started at the cards you're about to see for a good ten or fifteen minutes trying to think of a title. Nothing.

I had a good reason this time, though.

The contents of a package I recently received from "friend of the blog" and longtime trade partner Jim (a.k.a. GCRL) of the awesome blog "Garvey Cey Russell Lopes" had no discernible similarities to them.

If you read this blog at all, though, you probably know that those are my favorite types of mailers to open. And Jim is among the kings of finding great random cardboard for me to dig through.

Once I saw Kent Tekulve's awesome shades, I knew I'd be in for yet another treat. 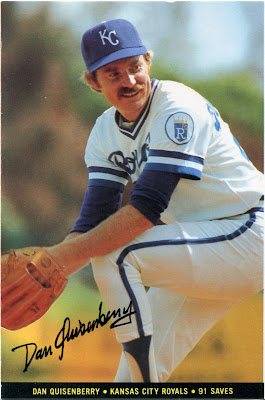 On the flip side of Mr. Tekulve was fellow sidewinding fireman Dan Quisenberry.

As you may be able to tell from the scan, this thing is quite oversized. At first, I had absolutely no idea what the heck it was.

It didn't take long to solve the mystery. A little research showed that this spectacular piece comes from the 1983 Topps Foldouts release, one I'd never heard about before this trade package showed up on my doorstep.

Trade packages can be educational, too. 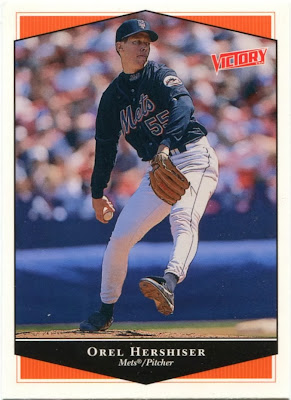 For now, though, let's get back to your standard-sized cardboard.

Up until recently, I'd given up hope of ever finding a card of Orel Hershiser as a Met. I didn't think any existed.

That changed when I unearthed my first one at this year's National. (A dime box find, I might add.)

To my delight, I found a second card of "Bulldog" in the Big Apple inside of Jim's most recent trade package. (I've since received a third from another blogger, but more on that in a future post.)

In case you were wondering, Hershiser spent exactly one year as a Met in 1999, winning 13 games (albeit with a 4.58 ERA) for the club.

Apparently, card companies took more notice of the tenure than I'd originally thought. 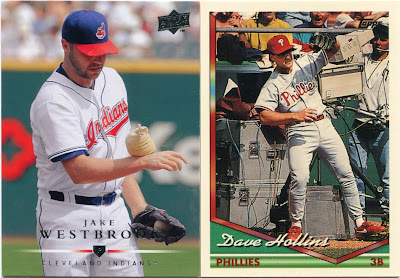 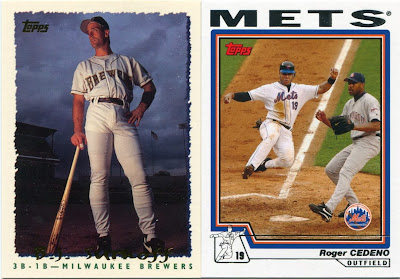 No rhyme or reason to either of these cards.

Except for the fact that they're both awesome, of course.

You've got to love the rather unorthodox "play at the plate" shot on the Cedeno. 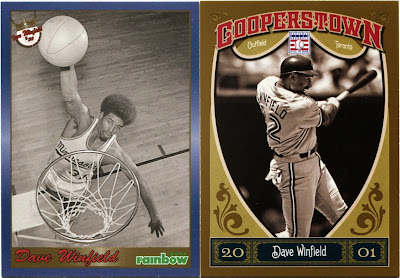 I'm convinced that Dave Winfield was one of the greatest athletes in sports history.

Of course, he enjoyed a Hall of Fame career in baseball, eventually capturing a World Series ring with the '92 Blue Jays.

Winfield also had some raw talent on the gridiron, as he was drafted by the Minnesota Vikings out of college. All while never playing a single game of football in college.

The guy could shoot hoops, too. Both the Atlanta Hawks (NBA) and the Utah Stars (ABA) drafted him.

Perhaps his greatest accomplishment of all was rocking that gargantuan 'fro during his college years. 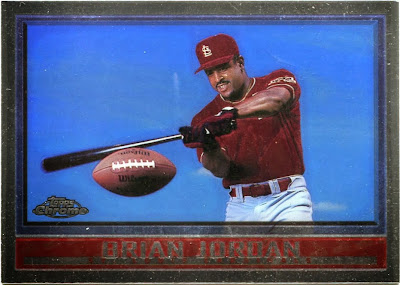 Jim also had the insight to include the Chrome version of one of the best cards of the '90s in this trade package. 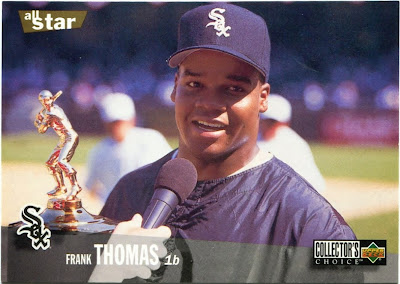 The "multi-sport heroes" Jordan was just the beginning of the mini-collection fun.

It's a coveted combo mini-collection hit. 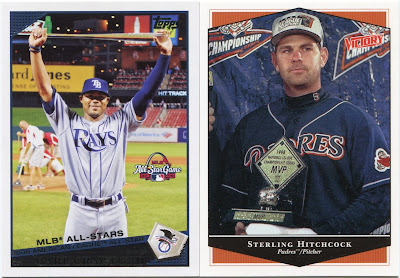 Jim actually sent along quite a few hardware-themed cards.

Featured on the left is Carl Crawford hoisting his 2009 All-Star Game MVP trophy.

On the right, though, is one of the better "Award Show" shots I've ever seen. Believe it or not, I owned the Hitchcock at one point in my life. But I traded it away.

How I could ever let go of such a terrific card is beyond me. It shows just how brainwashed I was before I found this place.

I mean, just look at that booze-soaked tarp behind the former NLCS MVP. 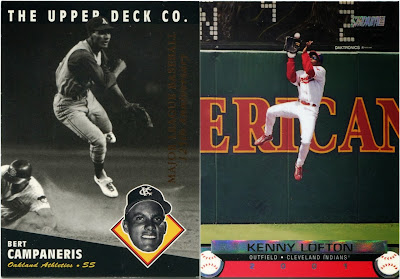 Jim is the "double dip" aficionado of the blogosphere.

He's the inspiration behind my far inferior collection of double play shots. I'm guessing the "Campy" was a double from his "double dip" travels.

What you see there is actually an "125th Anniversary" parallel from one of the greatest legend-based sets ever released in 1994 UD All-Time Heroes.

As you may know, I also have a soft spot for "At the Wall" shots like the Lofton.

I'm so glad I decided to devote an entire mini-collection for cards like those. 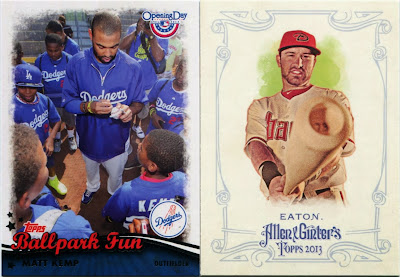 Heck, I may well have a new favorite Matt Kemp card.

I hope he stays with the Dodgers, but I wouldn't blame the club at all if they decided to trade him. If that shot is any indication, though, they'd lose a true presence in the Los Angeles community.

While A&G isn't hailed as a photographically innovative set these days, that Eaton is certainly a terrific shot.

The fact that the guy was recently dealt to the hometown White Sox earns it a few bonus points as well. 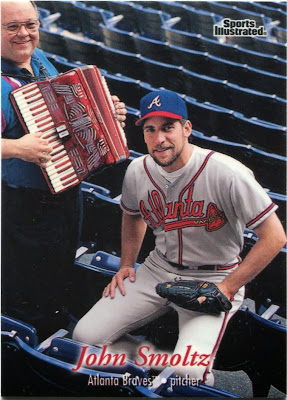 While it was definitely a star-studded trade package, I think this was the best card from Jim's loot.

From what I know, John Smoltz can hold his own on the accordion. That explains the premise for this particular shot.

Still, it's not something I ever thought would make its way onto cardboard.

I'm not sure who the gentleman with the accordion is on this terrific piece, but it looks like the ol' band is getting a new member.

Between foldouts, footballs, basketballs, and accordions, I think you can see why coming up with a title for this post proved to be a daunting task.

Still...the harder the title, the better the cards.

Love the Teke card! I had the privilege of meeting him this summer... his personality is just as great as his shades.

Glad you enjoyed the package. I've got a short stack of cards to send you - no accordions though.

Every time I see Tekulve or Quisenberry cards, it reminds me of my childhood. You have no idea how many times I tried to emulate their pitching deliveries.