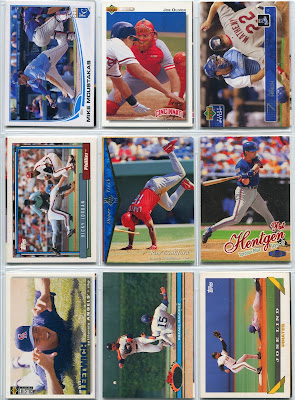 After a bit of a hiatus, my "dime box frankenset" posts are back in action.

We're now into the triple digits, by the way. This fantastic assortment also continues a long string of completed pages.

Oh, and in case you missed it, I thought now would be a good time to remind you about the contest I'm holding around here. All you have to do is leave a comment on this post by tomorrow at 11:59 PM and you're entered. I'll announce the winner on New Year's Day.

With that in mind, let's take a look at another terrific frankenset page. 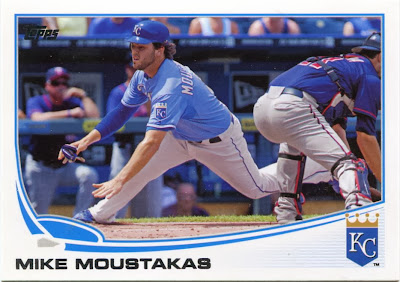 Mr. Moustakas is the first "hero number" in this frankenset.

While cards ending in "00" designations aren't has legendary as they once were, Topps still produced a doozy with this terrific piece, one that occupied the #100 slot in this year's Flagship checklist.

It's hard to not love a good "play at the plate" shot. 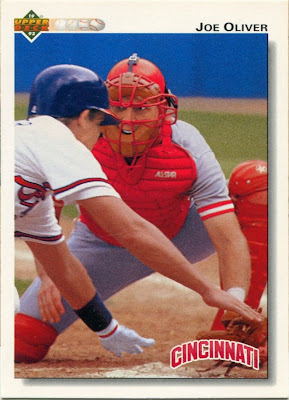 While he was never a big name in baseball, card companies sure seemed to like him. He received a number of terrific cards during his career, many of which reside in this very frankenset.

This one is a particular favorite of mine, as you can clearly see the menacing stare Oliver is giving to a poor baserunner.

I feel bad for whoever that Atlanta Brave is. 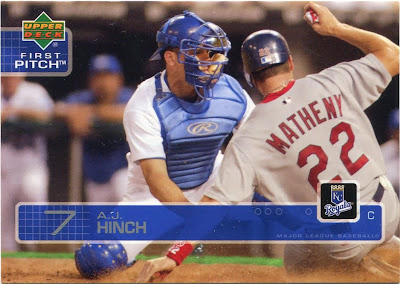 Unbelievably, this is our third consecutive "play at the plate" shot on this page.

One thing I find fascinating about this particular issue is the fact that both of the pictured backstops ended up with fruitful "outside the lines" jobs after their respective careers were over.

The baserunner on this play, Mike Matheny, is in the middle of what looks to be a long and successful reign as the manager of the Cardinals.

A.J. Hinch worked his way up to becoming the director of player development with the Diamondbacks before being named their manager in 2009. He lasted a little more than a year before being fired. Hinch is now in the Padres' front office as vice president of scouting.

Back in 2003, though, they were meeting in this fantastic "play at the plate" clash. 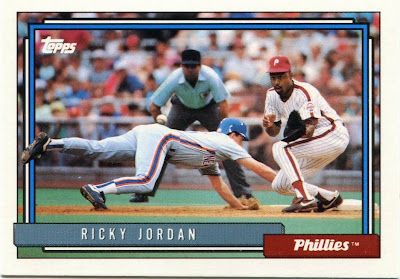 Pickoffs aren't as widespread as they probably should be in this hobby.

Just look at the greatness they can hold. 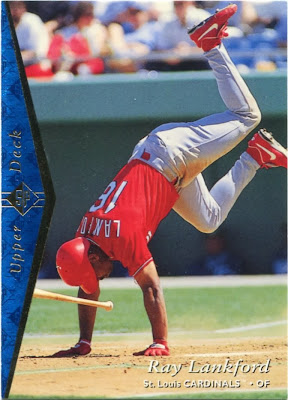 This is probably one of my favorite cards in this frankenset.

Whoever chose to use this card for the SP checklist is a genius. How often do you see a guy doing a handstand on cardboard?

I have yet to find another one. 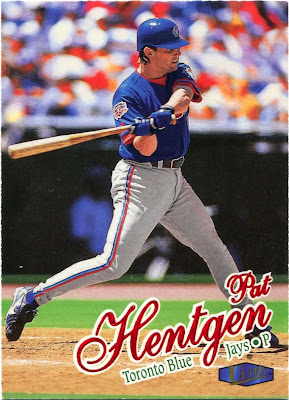 This shot probably comes from the very first year of interleague play in 1997, as Hentgen was with the Blue Jays (an American League club) at the time.

For the record, he carried a career batting average of .107. 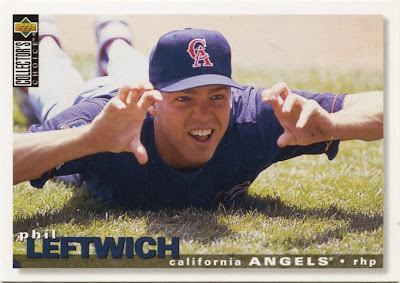 I still can't tell whether Leftwich is trying to scare or hypnotize the photographer in this shot.

Either way, it's good for a nice chuckle. 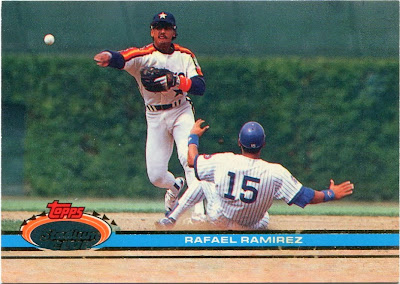 I can honestly say that this is one of the better "double dip" cards I've ever seen.

It's a perfectly framed shot, one that is spectacularly topped off by the Wrigley Field ivy in the backdrop. I don't think a vertical shot would've done Mr. Ramirez justice, so I'm happy Stadium Club chose to go the horizontal route here.

It definitely adds to this card's beauty. 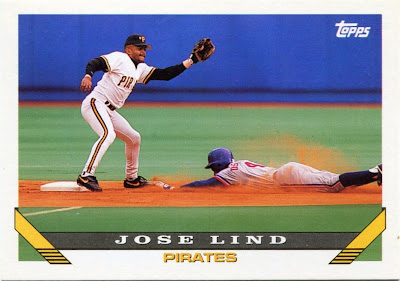 Closing out this frankenset page is yet another play at second base.

It's hard to tell for sure whether Jose Lind would've been able to get the tag down on Delino DeShields here. He's doing his best to block the base, but the throw does seem a bit high.

In what is becoming a regular feature of these frankenset posts, I did my best to date this particular shot. It's harder and not as certain with this one, as there's a chance it might not even be a stolen base attempt.

However, assuming DeShields was trying to swipe second, the only time he did so in an away game against the Pirates with Lind covering came on June 21st, 1992, in what would be a 5-4 Pittsburgh win.

He did so in the first inning against Pirate catcher Mike LaValliere, though he would be stranded at second.

I must say, I kind of like doing this kind of detective work.

You should try it yourself one day if you haven't already.
Posted by Nick at 8:03 PM

Rafael Ramirez - yeah, but it's still crappy Wrigley in the background.