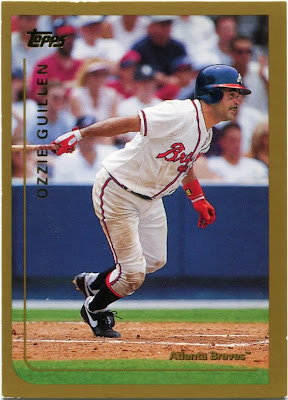 Continuing on from Part 1, we're ready to meet the other half of the Braves "Short Term Stops" infield.

Ozzie Guillen's stint in Atlanta wasn't quite as short as most of the other players you'll see on these rosters. He spent a little over a year-and-a-half in the Braves organization, hitting .260 in the 175 games he'd play with the franchise.

In the end, the reason Guillen made this roster was because of sheer unfamiliarity. I'd bet that few fans even remember his stint with the Braves. The fact that the man spent the bulk of both his playing and managerial careers with the White Sox makes anything else seem way out of the ordinary.

Even though I've owned this particular card for as long as I can remember, I still can't get used to seeing Ozzie Guillen in a Braves uniform. 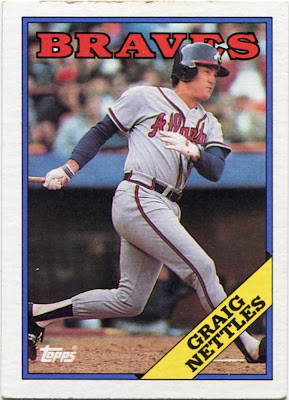 This is the very last Topps card of Graig Nettles.

One of the more gaping oversights in hobby history was the flat-out refusal of any company to give Nettles a true "sunset" issue. That is, any company except Score.

Although he'd play in 80 games for the 1988 Expos, the Topps career of Graig Nettles ended in Atlanta.

At 43 years old at the time, he was basically a role player for the 1987 Braves. He racked up just 201 plate appearances in his 112 games for the franchise, hitting .209 with five homers in the process.

While 1988 Topps is a perfectly fine set, it shouldn't have been the last appearance of Graig Nettles in a Topps checklist. 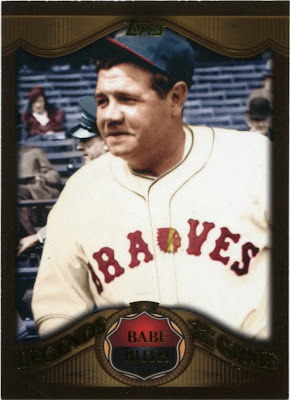 Quite possibly the ultimate "Short Term Stops" stint ever.

Of course, George Herman Ruth was arguably the greatest player in the history of baseball. He changed the way the game was played, demolishing the competition in the process.

By the time 1935 rolled around, though, the Babe's better years were long gone. After refusing to grant Ruth his lifelong dream of managing a ballclub, the Yankees released him.

The struggling Braves quickly snatched him up, giving "The Great Bambino" a hybrid-like role with the club. He played outfield, served as assistant manager, and was named vice president of the franchise.

Ruth had almost nothing left in the tank, hitting a paltry .181 with six homers in his 28 game with the Braves.

However, he showed a flash of brilliance in one of his final games, smashing three homers in a contest against the Pirates. One of those homers was the first and only ball to ever clear the roof of Forbes Field.

I paid a whole two bucks for the "Legends of the Game" insert you see above. I rarely pay more than a dollar for anything non-vintage these days, which should tell you just how awesome I think this card is.

You're not likely to find a better "Short Term Stops" candidate. 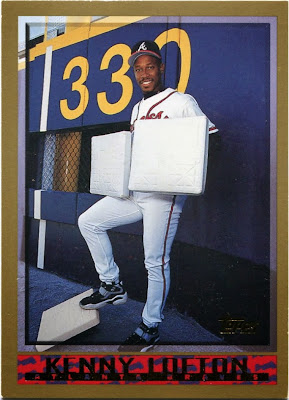 If you'll remember, Lofton also made the Astros' roster, having played briefly for Houston during his rookie year.

By the time 1997 rolled around, he was a bonafide superstar. He led the American League in stolen bases every year from 1992 to '96.

In a move that I'm sure was a shocker back in the day, the Indians dealt him to the Braves in March of '97 for Marquis Grissom and David Justice. Atlanta would be the third of eleven franchises for which Lofton would play during his long career.

But, in what would become his second of three stints with the Indians, Lofton returned to Cleveland via free agency the very next season.

While it's still not one of my favorite Topps sets, 1998 Flagship saw the speedster in a creative base-themed pose.

If the design wasn't so hideous, I'd like that set a lot more. 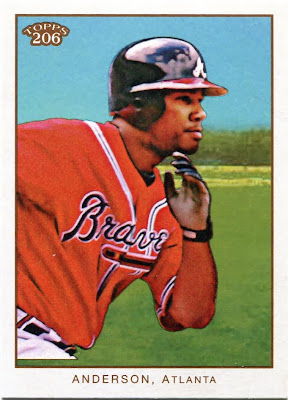 Garret Anderson is an Angel.

Though he could've well been a career Angel, Anderson spent his final two big league seasons toiling in mediocrity.

He hit .268 with 13 dingers in 135 games for the '09 Braves, his first season away from Anaheim. Anderson would spend the final year of his illustrious career with the 2010 Dodgers. But more on that in a future "Short Term Stops" post, I'm sure.

Although it's only been about four years since his stint in Atlanta, I constantly have to remind myself that Garret Anderson was actually a Brave at one point.

Thanks for tuning in for another edition of "Short Term Stops".
Posted by Nick at 6:19 PM

That Lofton (you sent me one), and is one that I have in the December favorite pile, LOL. Absolutely love that Ruth card too!

Wow, there are so many squares in the Lofton that I've never noticed before! Another one for the rader : )