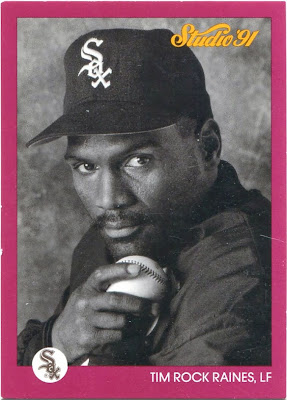 Names are an integral part of baseball lore.

Other sports may have their fair share of neat monikers, but only baseball could produce guys with awesome names like Richie Ashburn or Harmon Killebrew.

And, in something that has been said many, many times before on this blog, no sport can touch the sheer greatness of baseball nicknames.

Only in this great sport will you find guys like Rocco "Rocky" Colavito and Larry "Chipper" Jones.

I've always wondered how much baseball cards have embraced these nicknames over the years.

So, in a post idea I've had planned for a few months now, I finally went back through my collection and got an answer to the "real name vs. nickname" dilemma.

I can't be sure, but I think the inspiration for this post came from Tim "Rock" Raines himself. I've read from a few different places that Raines jokingly asked Topps to call him "Rock" on his cards.

Topps took it seriously, though, as the "Rock" label shows up on quite a few of his baseball cards. And, contrary to what I'd originally thought, it wasn't just Topps who fell for the joke. Donruss printed both names on Raines's 1991 Studio issue. 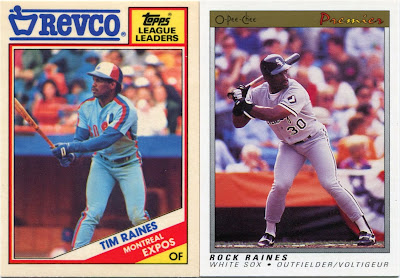 So, as far as baseball cards are concerned, just what was the first name of Mr. Raines?

I own a grand total of 66 cards of the speedy former outfielder.

He lasted a long time in the bigs, so that provided for a nice sample size. 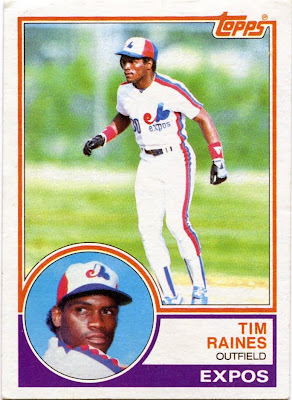 The "push" is thanks to the aforementioned '91 Studio issue.

As it turns out, the whole "Rock" fad was pretty short-lived. All seven (and a half) of the ones I own that list the nickname fell into the period between the late '80s and early '90s.

By and large, Raines went by Tim on the vast majority of his cardboard. 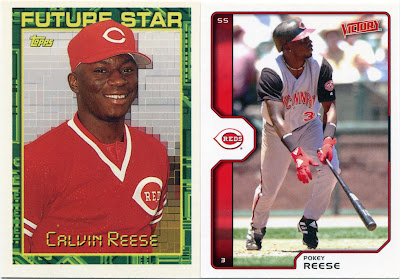 For a long time, I just assumed that Pokey Reese's first name was actually Pokey.

I'd never heard anyone call him by anything else. Through my baseball cards, I later discovered that Pokey's given first name was Calvin.

After I uncovered that little nugget, I sought to collect every single card that listed his first name as Calvin. (Eventually, I caved in and just started collecting all Pokey Reese cards, regardless of name.)

As far as I can tell, 1998 was the turning point on the Calvin-Pokey spectrum. All pre-'98 cards list him as Calvin, while all cards from 1998 and after label him as Pokey.

It's still one of my favorite nicknames in baseball history.

But what did the card companies think? 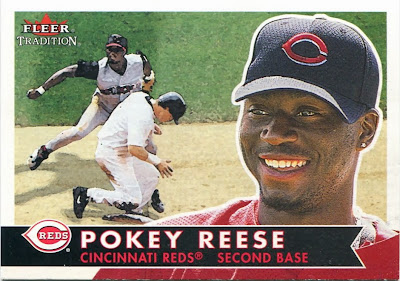 The card companies agreed with me.

Of course, the majority of my Reese cards come after '98, so that definitely helped the Pokey case. But, to most baseball fans, he'll always be Pokey Reese. 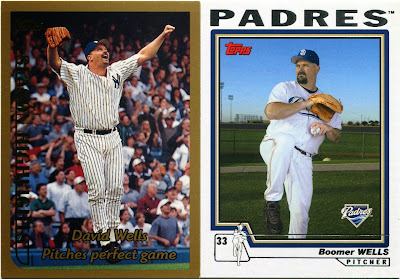 I knew this wouldn't be that close of a race.

But I wanted to mention it in this post anyways.

Most fans know David Wells as the hard-partying, perfect game-tossing, pinstripe-wearing hurler who surprisingly lasted quite a long time in the big leagues.

I've always been a big fan of his, just because he's so far removed from what many believe the so-called "typical athlete" should be.

Now, most of my cards do indeed list him as David Wells, but during the early-to-mid 2000's, Topps decided to go a different route, labeling him by his fairly famous nickname, "Boomer".

Unfortunately, it was a short-lived phase. 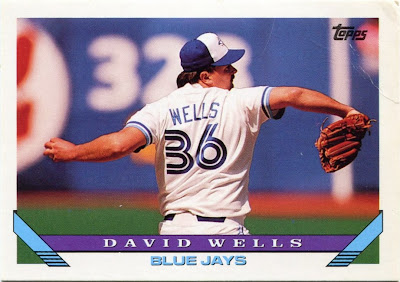 I sure do wish there were more than three cards in my collection that listed him as "Boomer", though. (If you're at all interested, the ones I have are his 2003 Topps Total, 2004 Topps, and 2005 Topps issues.)

They sure made for fun pieces. 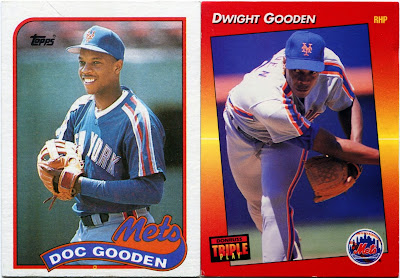 The big news story in baseball today is the retirement of Roy "Doc" Halladay.

As great as Halladay was, though, he wasn't even the first famous "Doc" in the big leagues. That honor goes to one of the greatest pitchers in Mets history, Dwight "Doc" Gooden.

All of Gooden's earlier cards list him by his given first name, Dwight. Around 1989, though, the "Doc" phase began. Quite a few of his cards afterwards feature the "Doc" Gooden label.

Topps led the charge in that department, although I do own a few Score and Upper Deck-based issues that also list him as "Doc".

I was especially excited to see what the results of this competition would be. 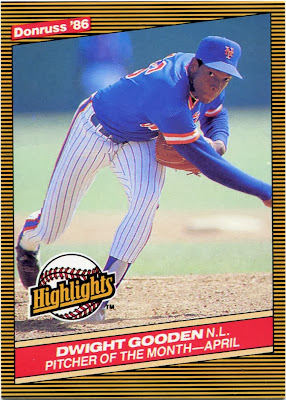 It wasn't nearly as close as I'd originally thought.

As it turned out, the "Doc" phase was pretty short. After about 1993, card companies went back to listing him as regular ol' Dwight.

While most people around the baseball community probably remember him as "Doc" Gooden, the cardboard suggests otherwise. 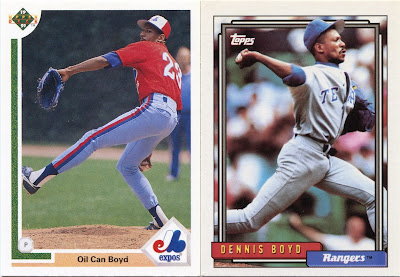 The final two "What's My Name?" contestants are arguably the two most famous from baseball card lore.

Dennis "Oil Can" Boyd owns one of the greatest nicknames in sports history. Card companies proved to be in constant battle on what to actually call the former Red Sox, Expos, and Rangers hurler.

Topps called him "Dennis" throughout his career. Upper Deck almost exclusively went with the "Oil Can" label. Donruss and Fleer kind of waffled in between, for the most part.

So, to channel my inner Family Feud... 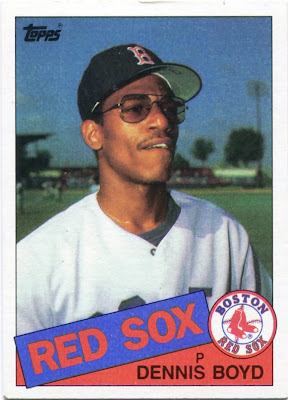 Donruss pulled the ultimate cop-out in 1984 by listing him as both Dennis and "Oil Can".

In the end, though, Boyd went by "Dennis" on the majority of my cards of his. Judging by the 17-to-13 victory, it was definitely a close race.

While I was hoping for "Oil Can" to pull out the victory, it just wasn't meant to be. 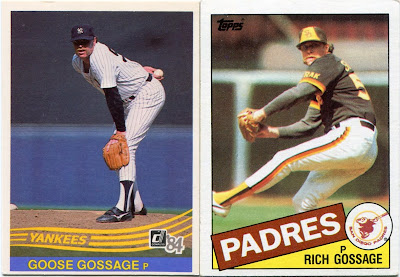 This, however, was my personal favorite battle of the bunch.

After countless peeks through my Rich "Goose" Gossage collection, I'd noticed that card companies seemed to use his two names interchangeably.

Most of his earlier cards list him by his given name of Rich, but a lot of his later issues went the "Goose" route.

Donruss was almost exclusively "Goose"-centric, and Topps pretty much stayed with Rich throughout the reliever's long, illustrious career.

The votes were tallied, and a name was given. 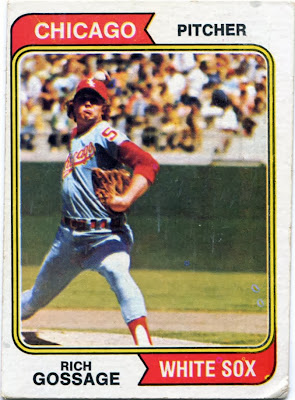 Two of my cards of his list him as Rich "Goose" Gossage, while one doesn't provide a first name at all.

Although it turned out to be a close race, card companies largely favored Rich over "Goose". I was actually expecting "Goose" to win out.

The cards proved me wrong.

Of all the players in this post, "Pokey" Reese was the only one to have a nickname emerge victorious over the given name.

Whether that's for better or worse is up to you.
Posted by Nick at 6:39 PM

Another good one is Benito/ Benny Santiago.

Topps had a run of listing Tom Gordon as Flash Gordon for a few years. It hasn't reached mini collection status for me yet, but I do get a little excited every time I see a Rock or Boomer card.

When I was a kid, the very first thing I loved about 1989 was the first appearance of "Rock" Raines and "Doc" Gooden. It was so strange, but in a good way. The Gooden wasn't nearly as surprising as the Raines though because everyone called Gooden that, but I had never heard the nickname Rock used for Raines before that card came out.

I grew up watching the Expos play on tv here in Canada, I cant remember ever hearing Dave Van Horne refer to Raines as "Rock", and because of the era I grew up in, when I think of Boomer Wells I think of the guy featured on the 1982 Blue Jays Future Stars card.