Back to the good ol' days 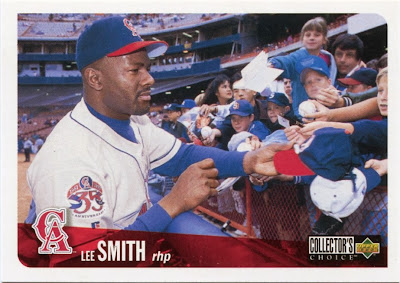 I don't know if I've been in the blogosphere long enough to reminisce about the "good ol' days" of blogging.

If anything, my tenure around here has gotten more and more fun with each passing hour. I'm sure a lot of other bloggers would say the same.

I guess if I had to choose, the one thing I miss about my earlier days around here is the glorious advent of "blogger boxes".

For reasons I can't quite explain, box after box of cardboard goodness seemed to arrive on my doorstep with each passing day earlier on in my blogging tenure. In the span of about a month or two, I received a good half-dozen or so of these things.

The mysterious fad seemed to die out in the blink of an eye. Though it did allow me to get caught up on my sorting, I missed digging through all that cardboard. I still certainly receive an ample amount of trade packages these days, but the whole box thing is a rare find in the current blogging universe.

Perhaps a "blogger box" comeback is on the horizon, though. After all, I did recently receive a flat-rate box of cardboard goodness from T.J., a blogger buddy and author of the terrific blog "The Junior Junkie". He owns, of course, the largest Ken Griffey Jr. collection I've ever seen.

Like so many of my other longtime trading partners, T.J. has a fantastic grip on what I collect. In fact, this is the second straight "Junior Junkie" trade post that features an "autograph" shot of Lee Smith as an Angel. 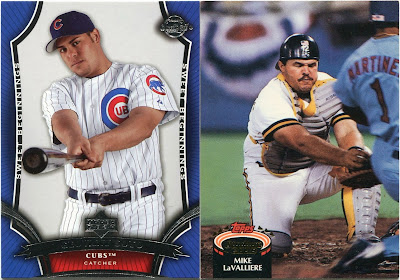 I collect Geovany Soto, so adding a new rookie of his to my binders would've been a success regardless. The neat "bat barrel" shot is a pure bonus.

The LaValliere "play at the plate" is yet another sparkling example of Stadium Club's terrific photography.

Besides, it's hard not to like any card with bunting in the background. 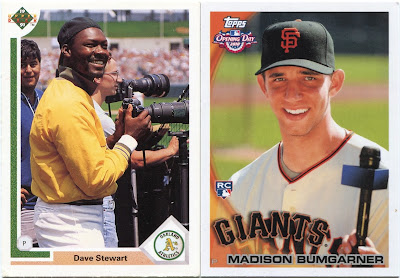 Above are a couple new hits to my "behind the camera" and "interview" themes.

Given the rather serious poses he strikes on his other cards, it's good to see that "Smoke" had a softer side. 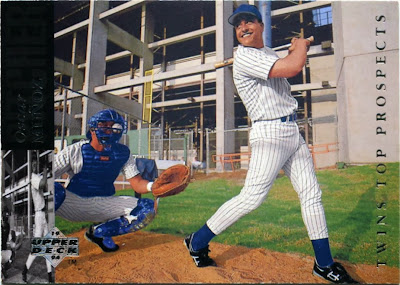 Oscar Munoz was a former pitcher in the Twins organization, so that indeed makes this a coveted "pitcher at the plate" shot.

In reality, though, this card raises more questions than it answers.

First off, where the heck was this photo taken? Where's home plate? What stadium is that?

And, as perhaps the most pressing question of them all, why is there a baseball wedged inside the mask of that poor catcher behind Mr. Munoz?

See, it's crazy cards like these that keep me infatuated with this hobby day after day. 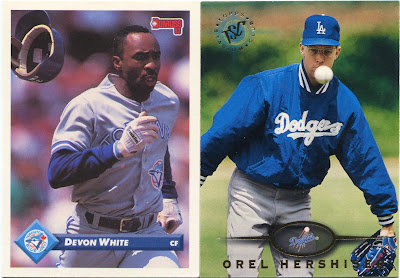 Contrary to what you might believe, I'm not all about mini-collections.

I'm more than open to receiving fun, random cardboard. If a card manages to put a smile on my face, that's a definite success in my book.

Both of these pieces managed to do just that.

The shot that Donruss used for Devon White's spot in their '93 checklist sure looked familiar to me. That's because it appears to be taken a few frames before the photo Topps used on White's '92 issue.

Hey, Hershiser! You already have the title of "Nerdiest Man of Cardboard".

You don't have to keep proving yourself. 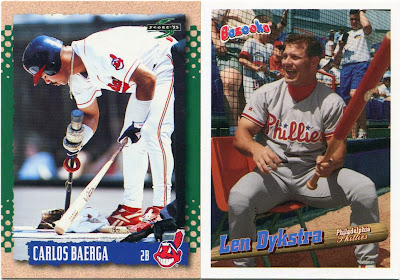 Part of what makes this hobby so fun to me is the fact that you can notice new things about a given card each time you look at it.

I didn't notice just how many donuts and other on-deck paraphernalia Carlos Baerga was utilizing until about my second or third viewing of that particular card. And it took a few looks to catch that red whiffle ball-like bat Mr. Dykstra is holding there.

This is why I find myself going back through my collection on a regular basis. 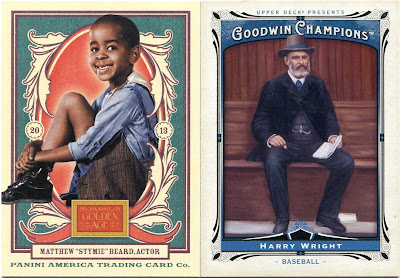 One of the things I enjoy about getting cards from T.J. is the fact that I have literally no idea what is going to be inside.

This particular box included everything from Buckwheat to Harry Wright. 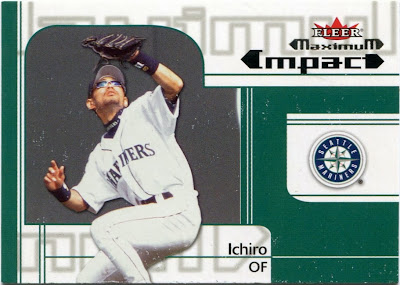 The player collection adds were aplenty in this glorious box of cardboard.

This insert is a treasured new piece for my Ichiro collection, one that has to be nearing the 500-card mark by now.

Still, it's oddly-designed cards like these that have me questioning the sanity of card companies in the late '90s and early 2000's. 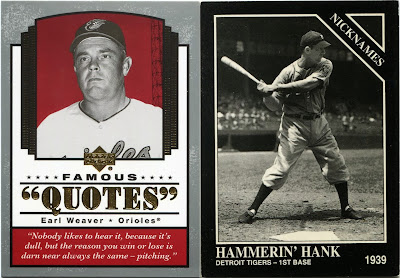 T.J. knows about my fascination with Hall of Famers, something that was apparent in his latest gift.

I may just have to specifically go out and build that "Famous Quotes" insert series one of these days.

That Weaver is an absolute beauty. 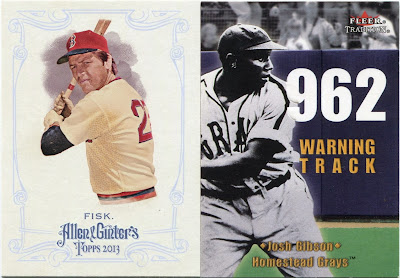 Also among the HOF goodies were a couple of the greatest backstops to ever play this game.

The Fisk is a short-print from this year's A&G checklist, while the Gibson is a well-designed insert from Fleer Tradition's early days.

I find it interesting that Fleer claimed that the legendary Josh Gibson smacked 962 homers during his career. From what I've heard, most experts put his tater totals near the 800 mark. I've never caught wind of a specific number like 962.

If there is such a thing in this hobby, that insert is a definite conversation starter. 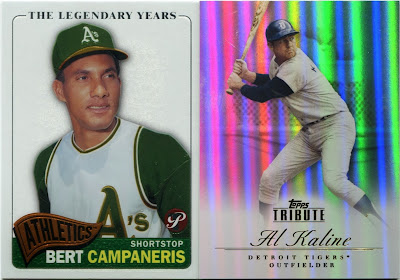 I feel odd showing cards from such high-end products on this blog.

While sets like Topps Pristine and Topps Tribute may be well out of my price range, there's no denying that they're both home to some beautiful designs.

Mine may be a low-end collection, but I'm proud to add these two to my binders. 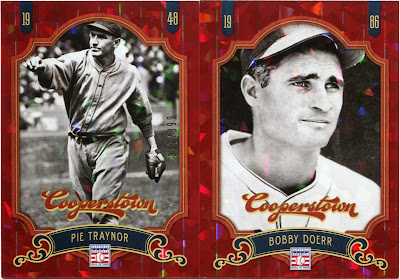 The whole "cracked ice" thing seems to be a growing fad in today's hobby.

And I don't have a single, solitary problem with that.

If card companies want to print more cards like these in the future, they can be my guest. 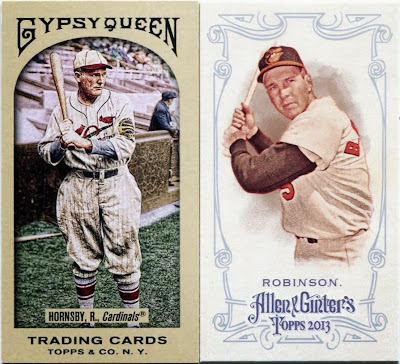 Much to my delight, T.J. decided to throw a few minis into this already spectacular box of cardboard.

Hall of Famer minis are often the best kinds. 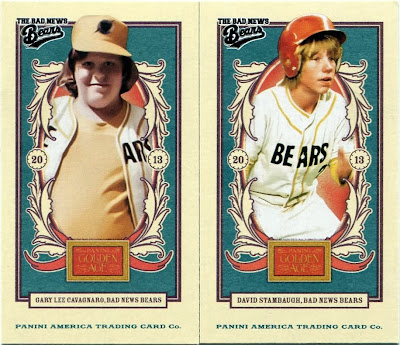 These, though, were a couple of the biggest surprises from this box.

With these minis of Engelberg and Toby, I'm starting to consider chasing down the bite-sized variations of the six Bears.

It'd certainly be a fun project. 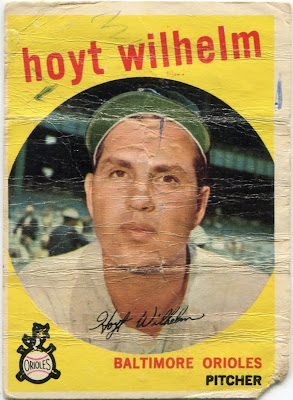 Of all the great cards T.J. sent, I think this was the card that piqued my interest the most.

While I've long had a much better-conditioned copy of Hoyt Wilhelm's 1959 Topps issue in my collection, I can't help but be partial to such a well-loved piece of cardboard past.

As you might be able to tell from the creases, Hoyt here can be easily folded into thirds. It's probably the result of some kid of the '50s or '60s walking around with this card in his or her pocket for days on end.

There's writing on it, and one of its corners was lopped off at some point in its life. I can't help but think that Hoyt was part of a few flipping contests in his day.

These are the types of cards that I've learned to appreciate over the years.

Sure, mint or near-mint copies are good to have, I doubt they've had more fun than cards like these.

If baseball cards could talk, I'm sure Hoyt here would have quite a story to tell us.

After all that, I think you can see why I miss the whole box fad. Just look at all that great cardboard.

The thought and care that goes into one of these "blogger boxes" is pretty much exclusive to the great people of the blogosphere.

You collect so much stuff that putting a stack together for you is easy. Now where are you going to put them all? :-)

That Hoyt card looks as if it has seen a few bike spokes (common tradition back in the day. kids did this for the sound it made flfllflflflfllflflflfl