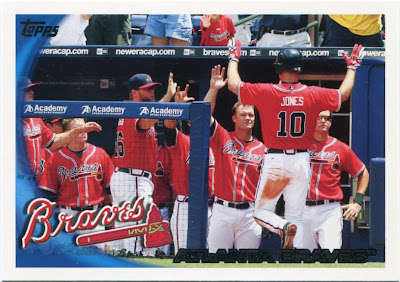 For myself and many other students around the nation, finals week has begrudgingly arrived.

After writing and studying my eyes out over these last few days, all I wanted was to have a little "me time" with my cardboard.

As a result, I assigned myself a little bit of cardboard homework. After weeks of waiting, I finally composed a "Short Term Stops" roster for the next franchise in line, the Atlanta Braves.

I'm quickly coming to favor writing these posts more than any other in my group of themes. Unfamiliar uniforms have always been a special interest of mine, and I love doing the research on each individual roster nominee. (If only I could post them more than once every other month...if only.)

The Braves provided an especially fun challenge, as the franchise has moved from Boston to Milwaukee to Atlanta during their long history. They've also probably had the most names of any team ever.

Before becoming the Braves in 1912, they were known as the Red Stockings, Beaneaters, Doves, and Rustlers. They even had a brief stint as the Boston Bees in the late '30s.

It's been all Braves since then, and what a tenure it has been. While they won just one World Series in the process, their streak of 14 consecutive division titles during the '90s and 2000's is still simply mind-boggling. (Especially to a lowly Cubs fan like myself.)

While Atlanta has been home to big names such as Aaron, Mathews, and Chipper, the franchise has also managed to assemble quite an interesting "Short Term Stops" roster as well. 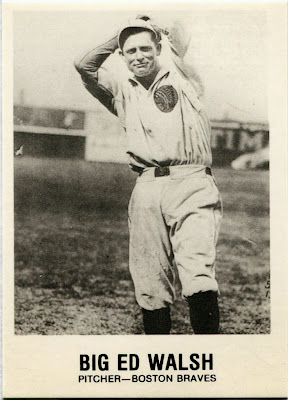 Walsh posted a sparkling 1.82 ERA during his 14-year career. Even nearly a century later, he still owns the lowest career ERA mark of any pitcher in history.

Of the 430 games Walsh played during his HOF career, 426 of them were with the White Sox. The other four came during his final season with the 1917 Boston Braves.

He went 0-1 with a 3.50 ERA during his brief stint with the franchise. Arm troubles eventually forced Walsh out of the game.

I'd be willing to bet that this is the only card ever produced of Walsh in a Braves uniform. It comes from the 1979-83 Galasso Glossy Greats checklist, one of my personal favorite "legends" sets in existence.

By the way, Walsh is and forever will be the last pitcher to win 40 games in a single season, doing so in 1908.

The last pitcher to win 30 games in a season... 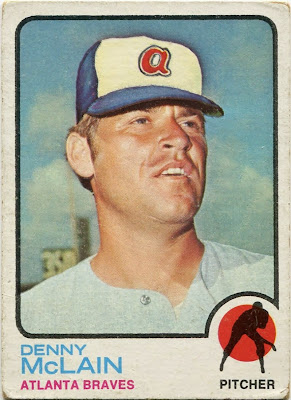 Denny McLain is our first multiple "Short Term Stops" nominee, as he also made the A's roster. In fact, that stint in Oakland came in the very same year as his tenure with the Braves.

After five unspectacular starts with the A's, McLain was dealt to Atlanta for future HOF first baseman Orlando Cepeda. (Cepeda would also go on to be elected to that A's "Short Term Stops" roster.)

Just four years removed from his legendary 31-win season in 1968, McLain was washed up by the time he became a Brave. His 15 games with Atlanta saw him post a 3-5 record with a 6.50 ERA.

Those were the last games Denny McLain ever pitched in the big leagues.

That, of course, makes his tough-to-find '73 Topps high-number a highly coveted "sunset" card. I'm not entirely sure where I got my copy, but it's been in my collection for what seems like forever.

It's definitely one of the better "Short Term Stops" nominees you'll see in this theme. 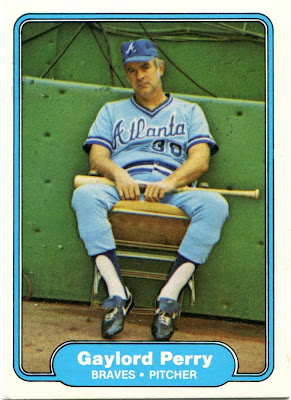 Gaylord Perry pitched for six different teams during the final five years of his Hall of Fame career.

After splitting his 1980 campaign with the Rangers and Yankees, the famous spitballer would spend the entire '81 season in Atlanta.

It wasn't a particularly spectacular year, as Perry posted an 8-9 record with a 3.94 ERA. He also rather dubiously led the National League in hits allowed, with 182.

To me, the most memorable thing to come out of Perry's stint with the Braves was his infamous 1982 Fleer issue, a set noted for its lovably awful photography.

This is definitely one of the worst (or best?) offenders. Its tilted orientation makes it seem like the future HOFer is about to fall out of his chair at any second. There's also a bat in Perry's lap for no particular reason, and his facial expression is nothing short of glum.

Don't get the wrong idea, though.

This is one of the best Braves cards around. 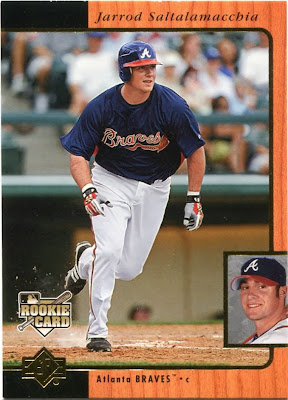 In case anyone ever asks, Jarrod Saltalamacchia owns the longest last name in baseball history.

Aside from that, though, he's cemented himself as a pretty darn good backstop. He recently signed a three-year, $21 million contract with the Marlins, in fact.

Six years ago, Saltalamacchia began his career as an Atlanta Brave. After just 47 games with the franchise, however, he was dealt to Texas in the blockbuster Trade Deadline swap that brought Mark Teixeira to Atlanta.

As a result, "Salty" had a half-year stint during his very first season in the big leagues.

That's a rare feat in this theme. 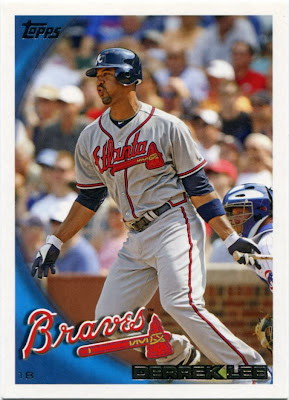 I never thought of Derrek Lee as a Cub until he wasn't a Cub anymore.

While he had a nice run with the Padres and Marlins in the '90s and early 2000's, many of Lee's best years came during a six-plus year stint on the North Side of Chicago.

I don't think I ever realized how closely I'd associated him with the Cubbies until they dealt him to Atlanta late in the 2010 season.

I actually specifically remember watching his first game with the Braves because they happened to be facing the Cubs in Chicago at the time. (The shot Topps used for Lee's 2010 Topps Update issue may well be from that very contest.)

It was also the final game Lou Piniella ever managed for the Cubbies. I watched it alone in my room during my lone college semester dorming away from home.

Only then did I realize just how odd Lee looked in any uniform other than the blue-and-white of the Cubs.

It only took six years to notice. 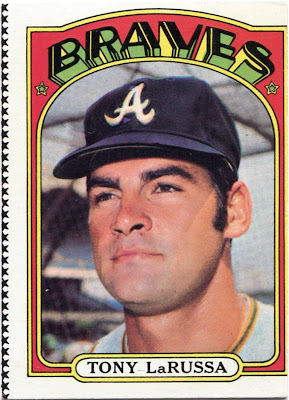 In case you haven't heard, a trio of deserving managers were inducted into Cooperstown yesterday.

All three have ties to the Braves.

Bobby Cox, of course, was at the helm during Atlanta's 14 consecutive division titles. Joe Torre spent the first nine years of his illustrious playing career with the Braves, making five All-Star squads in the process.

Tony LaRussa, however, easily has the least memorable tie to the Atlanta franchise.

He was a Brave for all of nine games in 1971, a rather innocuous stop during his forgettable six-year playing career. LaRussa had eight plate appearances in Atlanta, collecting two hits in the process and scoring a lone run.

Yet, for whatever reason, Topps chose to grant him a spot in their '72 checklist, the only card he'd ever have as a Brave. I scored this wonderfully miscut copy at a card show last year for a mere quarter.

While this is LaRussa's "sunset" issue, 1971 wasn't his "sunset" season. But it almost was.

His final stint in the bigs as a player came during a one-game appearance as a pinch-runner for the 1973 Cubs. He scored a run for the North Siders without ever taking a single at-bat with them.

Had he not become a Hall of Fame manager, I doubt any of us would remember Tony LaRussa.

As usual, be on the lookout for Part 2 later tonight.
Posted by Nick at 1:30 PM

I dime boxed a copy of that Perry. I agree: it is far too awesome a card to pass up.

Being a lifelong Braves fan, thank you. It seems the list could be much longer. I remember when Turner SOLD OUT to Time Warner/AOL, it seems that they rented a lot more star players (got them at the deadline and dealt them away in the off season), maybe they didnt get a card, now there is something for research. Good luck with the exams!