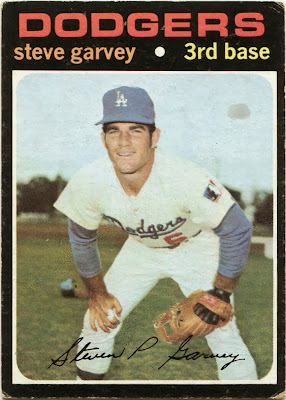 No, I doubt I would've known that had it not been for a reminder from buddy Jim (a.k.a. GCRL) on his blog "Garvey Cey Russell Lopes".

And, yes, the only reason I happen to be specifically writing this post today is because there's an outside chance I could get an authentic '52 Topps card out of it, thanks to a generous contest held by Mr. GCRL.

Still, this is a "sunset" post that is long overdue. After all, Steve Garvey was an important part of my upbringing, even though he retired a good five years before I was even born.

As I've mentioned before, my grandma moved to San Diego in the early '80s. Once there, she quickly became a huge fan of both the Padres and Steve Garvey.

She acquired a good deal of Garvey memorabilia over the years, some of which she eventually passed down to me. The '71 Topps rookie card of his you see above was one of those pieces.

I'm not sure exactly when my grandma gave it to me, but I know it was one of the first big vintage singles I ever owned.

It will forever be my favorite Steve Garvey card. 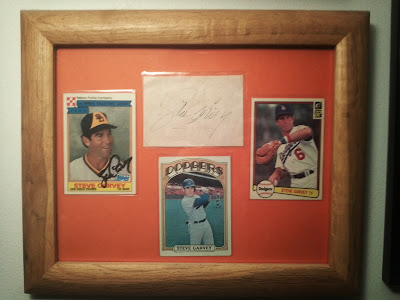 One of the stops my guide failed to make on the "grand tour" of my room was here.

This is a nifty Garvey-centric framed piece that I've had for seemingly forever. Like the '71 Topps rookie, this was also passed down to me from my grandma.

Included are not one, but two Garvey autographs, one of which comes a neat '84 Ralston Purina oddball. Also seen is an '82 Donruss single. I've since acquired a second copy of that one for my Dodgers binder.

However, I still haven't managed to track down an alternate copy of Garvey's 1972 Topps high-number. Part of me is tempted to crack it out of the frame and replace it with a different single so I can display it in my binder.

Deep down, though, I know that it's much better off in this beautiful tribute to Mr. Garvey. 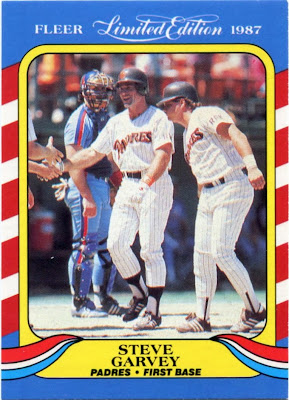 When you get down to his "sunset" cards, though, Steve Garvey was an interesting case.

His final season came in 1987. The first baseman would play in just 27 games that year, hitting a woeful .211 with just one homer and nine RBIs.

Not many of Garvey's cards include those rather dubious numbers on the back. That's because the vast majority of his "sunset" cards were issued in 1987.

For the record, I don't count "Limited Edition" cards towards these posts, but this one was simply too cool not to show. In a time where home plate celebration shots were rare in this hobby, this one likely features the aftermath from one of the 21 homers the former Padre hit in '86.

Also, that's a young John Kruk appearing to slap Garvey on the behind.

What makes this card so puzzling... 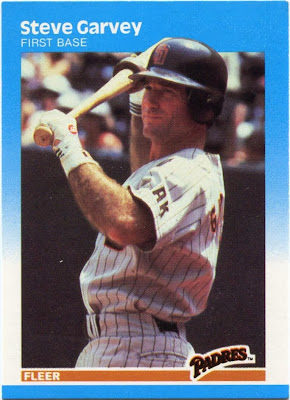 ...is the fact that it's a thousand times better than Garvey's official "sunset" card from Fleer.

Here, he's seen awkwardly stretching in the on-deck circle, complete with a rather unsightly expression on his face.

I enjoy '87 Fleer quite a bit, but this isn't one of the set's high points.

Not surprisingly, it brings up the rear in this "sunset" countdown. 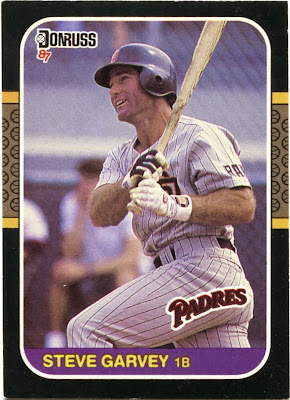 Not much about this set stands out in any way. The design and the photography are both perfectly average. That said, this is a perfectly acceptable in-action shot of Garvey at the plate. 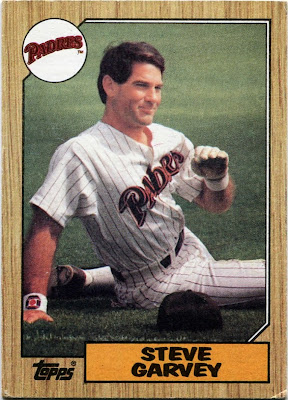 The famous wood-grain borders were a major part of the childhoods of many collectors at the time, some of which are still in the hobby today. Me, I'm a fan of the design based on aesthetics alone.

When I think of 1987 Topps, this is one of the first cards that comes to mind. This is another one that I've had for as long as I can remember, as the dinged corners might indicate.

Yes, it's another slightly odd photo, as Garvey seems to be partaking in some kind of pregame stretch. I've always found it to have a rather fashion model-esque vibe to it, which I guess fits perfectly into the type of person he was.

Had Fleer, Donruss, and Score been the only sets on the market at the time, there would've been a rather gaping hole in Steve Garvey's cardboard farewell. 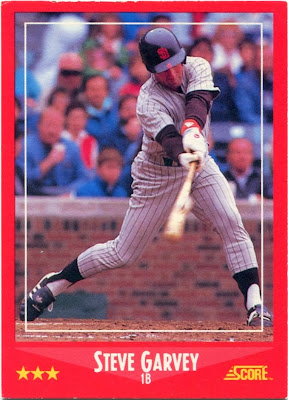 Luckily, Score came on board in 1988 to produce a true final chapter to the man's career.

I still think Score's debut checklist was the best one they ever produced. One of the many pluses to the set was the fact that it features the only true Steve Garvey "sunset" card.

All of the other major card companies chose to overlook his brief 27-game stint in 1987. But not Score.

While the dismal final year stats might be a bit painful to look at, they need to be included to constitute an official "sunset" issue.

As a result, Score was the only company to feature Garvey's complete career numbers on the back. I can't thank them enough for that.

In fact, I don't think it's too farfetched to say that this remains the single greatest card Score ever produced.

It's definitely one of the better "sunset" issues in existence.

You'll forever be an important part of my collection.
Posted by Nick at 3:55 PM

The strange thing about your ranking of 87 sets is that in 1987 most people had it Fleer #1, Donruss a close #2, and Topps a distant #3 (and perhaps even #4 behind the upstart Sportflics). I was always a Topps #1 guy, so I am glad that people's view of the 87 set has softened over the years.