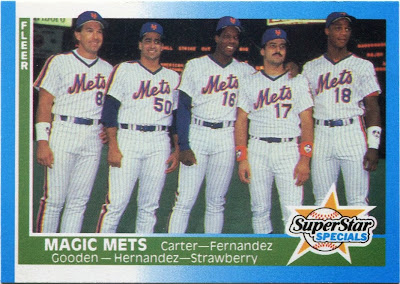 While finding a complete '91 Classic Best set for a buck was pretty darn cool, I think my second garage sale pickup was even better.

I noticed a long box of '87 Fleer among the guy's complete sets. After inquiring about the price, he told me I could take it home for two bucks.

At such a heavily discounted price, I didn't even have to think twice about it. I grabbed that set of '87 Fleer with a huge smile on my face.

I have about 99 percent of the cards I need from both '87 Topps and '87 Donruss. For whatever reason, though, I still needed quite a few singles from Fleer's offering that year.

Heck, I'd never even seen this amazing "Magic Mets" card before that garage sale came along.

When a stud like Sid Fernandez is the so-called "weak link" in a group photo, you know you have a lot of star power on your hands. 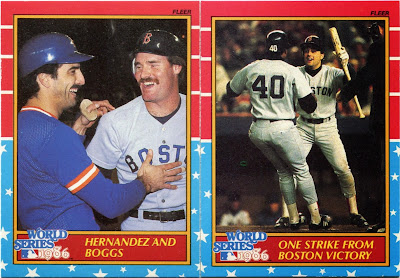 Baseball was still reeling from an epic postseason by the time '87 Fleer hit the shelves.

The 1986 playoffs featured some of the greatest series in baseball history. The dramatic October was capped off by the famous Red Sox-Mets matchup in the Fall Classic.

Finding the complete 12-card '87 Fleer World Series subset mixed in with the complete set was certainly a pleasant surprise.

They even still had that familiar musky smell of older cardboard. 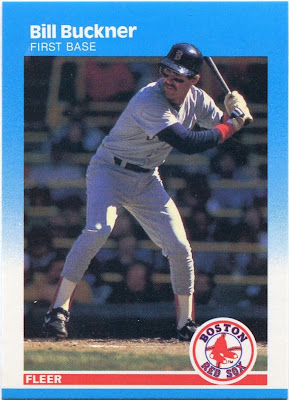 Of course, Bill Buckner was labeled as the goat of the series due to his costly game-ending error in Game 6.

I've probably seen the film of that play more than any other clip in sports history.

It's sad to see a moment like that define an otherwise sparkling 22-year career, one that saw him collect 2.715 career hits.

At the same time, though, it's nice to see that Buckner has pretty much moved past his unfortunate miscue in the '86 series.

He also made a hilarious appearance on Curb Your Enthusiasm recently, one that I urge you to check out. 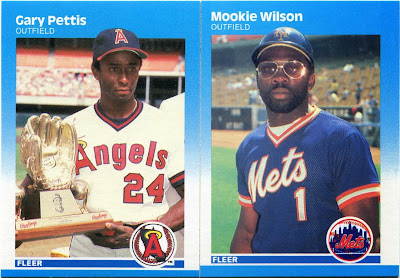 Mookie Wilson also had a cameo in that Curb episode, seeing as how he and Mr. Buckner will forever be linked in the annals of baseball history.

Like Buckner, Wilson also received a nice card in the '87 Fleer checklist. Just look at the reflection off of those gold-rimmed specs.

The Gary Pettis is one of the nicer shots I found in this set. The former Angels center fielder is showing off the second of five Gold Glove awards he'd win during his career.

Still, he'll forever be known as the guy who pulled off the "brotherly switcheroo" on Topps. 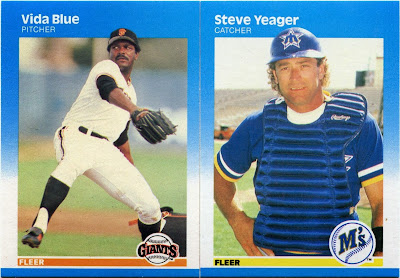 Also among the set's reaches were a few "sunset" cards I couldn't believe I didn't already own.

Vida Blue spent the final two years of his career in San Francisco, his second stint as a Giant. He went 10-10 with a 3.27 ERA during his last hurrah in '86.

Steve Yeager spent fourteen of his fifteen big-league seasons behind the plate with the Dodgers. That lone year outside of L.A. was his "sunset" season, one that saw him wear a different shade of blue in Seattle.

Both have career stats on the back, something that definitely adds a certain mystique to all "sunset" cards. 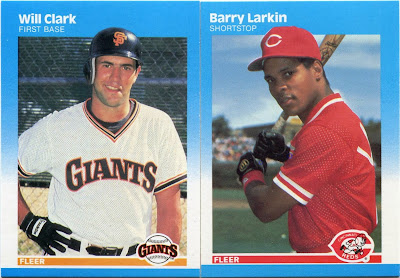 As it happens, 1987 was an unbelievably strong year for rookie cards.

I knew that going into this purchase. That's what made picking up a set like this for just two bucks all the more surprising.

Will Clark and Barry Larkin were just a few of the big name first-years that popped up in the '87 Fleer checklist. There's also one of a so-called "Home Run King" that I'd rather not show on the blog.

Still, if you want star rookies... 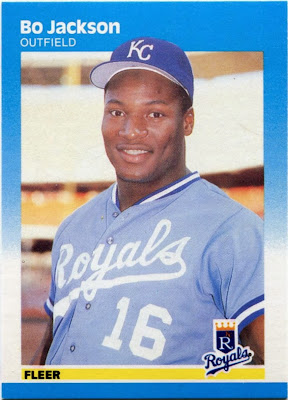 ...look no further than this guy.

I honestly can't imagine the amount of hype that Bo Jackson rookies must have caused back in the day.

While Bo did have a few "XRCs" in 1986, this '87 Fleer issue is still considered one of his official rookie cards.

And it's one I'm proud to finally say I own.

This has most certainly been the "Year of the Garage Sale" for me. No doubt about it.

Keep hitting the garage sales in your area, folks.

You never know when you'll hit a goldmine.
Posted by Nick at 3:00 PM

I'll never forget where I was and what I was doing when I saw Buckner, well... Bucker. I was folding laundry in my mom's bedroom and had her TV on so I could watch the game. I was 8 years old at the time.

If my memory serves correctly, in 86-87 Bo wasn't the big deal. Canseco and Joyner were the big deals.

I just found a Beckett from 1987. Canseco and Joyner were the highest values. Jackson and Will Clark were just behind.

Mookie rockin' the aviators FTW!! I love that first card too for some odd reason : )

Fleer didn't oversaturate the market like Donruss and Topps did that year, so it's not surprising that you didn't have as many of that manufacturer. Nice pickup.