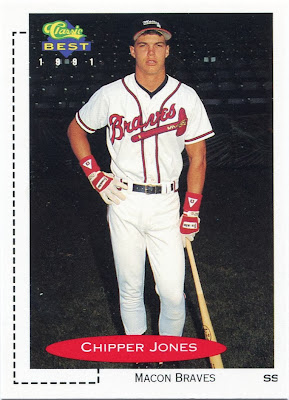 Mr. Jaybarkerfan recently asked what 2013 was the "year of" for all the bloggers out there.

It's definitely been a year of a lot of things for me. The year of one of the worst Cubs teams I've ever seen. The year of Panini's surprising emergence into the top tier of baseball cards. The year of the mini-collection.

Above all else, though, 2013 has most definitely been the "Year of the Garage Sale" around here. I noted that in my most recent garage sale success, one that resulted in an authentic '68 Topps Pete Rose for my collection.

What I left out of that post, however, was the fact that I made another trip to that guy's garage sale bright and early the following morning. He said he'd have some more baseball singles available after my first trip.

When I arrived the next day, the guy said he hadn't had a chance to sort through all his baseball extras yet, so I came up empty on that front.

However, he did have a few new selections available. I noticed a stack of complete sets that hadn't been there the day before.

Usually, I'm not that big on buying sets. However, the guy said he'd let them go for almost nothing, seeing as how he just wanted to get rid of them.

In the end, I took home two complete sets and a couple other miscellaneous singles for just four bucks. I'll be recapping both in the next couple days around here. 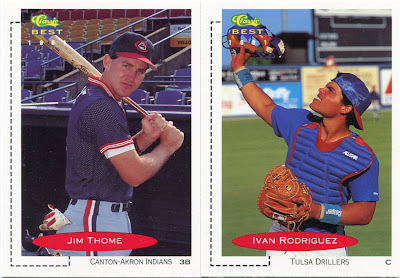 Granted, minor league sets are very hit-and-miss. I don't think there's been a good one since the late '90s.

After digging through all 450 cards (in their original shrinkwrap, mind you), I found that this was definitely a "hit" in the minor league department.

One of the bigger pluses of minor league-centric sets is seeing future stars during their days as no-name bushers.

Before Chipper Jones became the face of Atlanta, he played in Macon. Before Jim Thome rocked Cleveland, he was part of some sort of Canton-Akron hybrid club. And before the world knew Ivan Rodriguez as "Pudge", he was on a team called the Tulsa Drillers.

All three of these guys should be enshrined in Cooperstown one day.

But, as they say, everyone had to start somewhere. 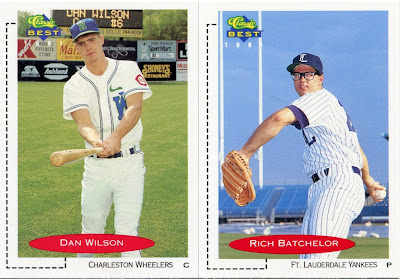 Big names weren't the only draw to this purchase, though.

As any minor league sets are bound to have, there were quite a few other fun cards in the mix as well.

That Dan Wilson is a highly professional "bat barrel" shot for such a low-budget checklist. The Charleston Wheelers were nice enough to flash Wilson's name up on the scoreboard for his card.

The gluttony of ads on the outfield wall is something I found on dozens of shots in this set. That's about as minor league as it gets.

Rich Batchelor earns the distinction of being one of the few players to make me physically laugh with their baseball card. 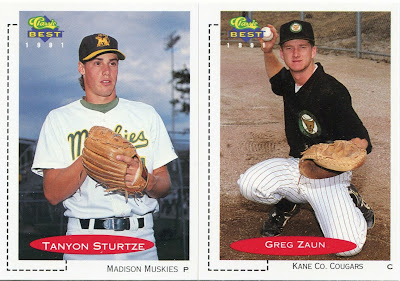 I found a few more obscure scores in this 450-card set as well.

For reasons I can't quite explain, I've always been a big Tanyon Sturtze fan and collector. That's the first minor league card of his I've ever seen. Even though the Muskies are an affiliate of the A's, Sturtze would never play a big league game in Oakland.

While not as obscure as Mr. Sturtze, I've long been a Gregg Zaun collector. (Yes, his name is actually spelled with two Gs. Don't ask me why.)

Before that card came along, I never knew he played for the Kane County Cougars. I went to quite a few of their games as a kid.

While Zaun was a little before my time, all Cougars cards I can find take me back to those great childhood memories. 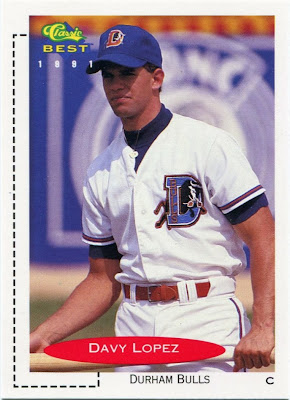 Who the heck is Davy Lopez?

That's the question I asked when I first saw this card. I'd be darned if that guy's face didn't look familiar, though.

A few seconds later, it hit me.

That's Javy Lopez, the superb backstop behind many of the great Atlanta squads in the '90s and 2000's.

It's cards like these that make minor league sets so darn lovable.

Especially when I can get them for a buck.
Posted by Nick at 1:30 PM

I bought that factory set back in the day.. for a lot more than $1, that's for sure. Still got it, too. The one gimmicky card was Mike Schmidt "retro". I think Pedro Martinez is in it.

Looked and looked for info for this 1991 classic best chipper jones. It is a double error. Nnof and wrong reverse. Mark Mitchelson on reverse Mint condition. Any info would be appreciated.

1991 classic best chipper jones double error. Nnof and reverse is mark mitchelson. I have searched and can find no info on it. Mint condition. Any info greatly appreciated, Diana