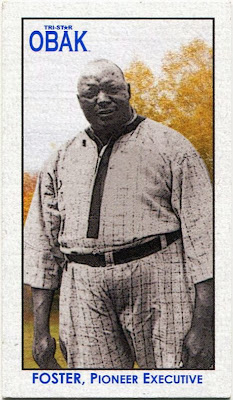 It's funny how much jersey cards have fallen out of favor with me.

They used to be my everything. Nowadays, I could honestly care less. If my interest in jersey cards were plotted onto a graph, it'd be one of those cartoonish ones with the red arrow extending way off the page.

While I no longer chase them, I can see why team and player collectors would want jersey cards. It pretty much comes with the territory a lot of the time.

When I pulled a Dustin Pedroia All-Star swatch from my box of Topps Update, I had a feeling it wouldn't be long before a Red Sox collector pounced on it.

I was right. The Red Sox collector in question, Brad, is the author of the awesome blog "Red Sox Fan in Nebraska" and a past trade partner of mine. He certainly gave the Pedroia (and the other Sawx I sent his way) a better home than I ever could.

In return, though, I received a substantial stack of awesome goodies, which is something that has been consistent with Brad's past trade packages.

If you ever find yourself putting together a group of cards for me in the future, it might be a good idea to include a few Tristar Obaks should you have any extras lying around. It's one of the greatest unlicensed sets ever made.

This one of Rube Foster, the man who formed the Negro Leagues, was certainly one of the best cards Brad sent along. 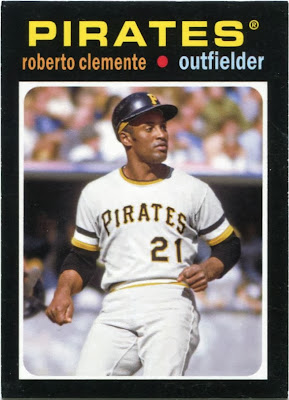 Brad also managed to do quite a bit of damage to my "set needs".

As I've mentioned before, though, all the cards on that page are simply player wants in disguise. That's certainly the case with this awesome Topps Update Clemente mini.

I'll own a real '71 Clemente one of these days. 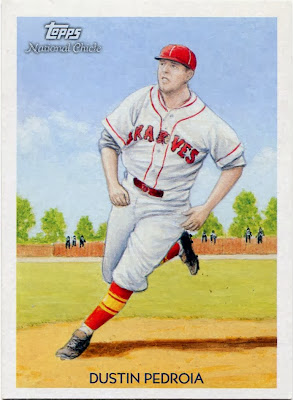 Now this is a card that absolutely does wonders with my cardboard OCD.

It's a great piece, don't get me wrong. The idea of putting recent players in old garb was very appropriate for an old-timey set like National Chicle. (All these flashback cards are short-prints, by the way.)

The only problem was the execution. A lot of the so-called "throwbacks" don't make any sense. One of the ones I have features former St. Louis Brown George Sisler in a St. Louis Cardinals jersey, even though the two franchises are in no way affiliated with each other.

While they may come from the same city, the Boston Braves and Boston Red Sox were never related, either.

In case you're wondering, this card will indeed go into my Red Sox binder.

My OCD isn't too happy right about now. 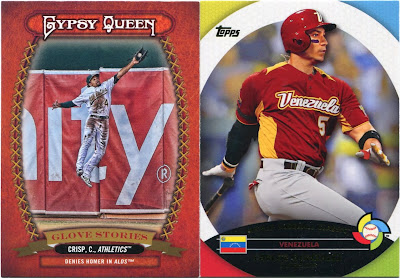 Also among the "set needs" were these two beautiful 2013 inserts.

Gypsy Queen may be a lackluster set for me, but the "Wall Climbers" series is certainly a hit. 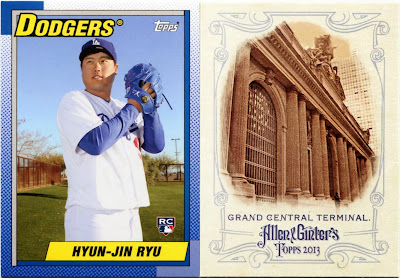 A few 2013 base needs made appearances as well.

The cardboard gods certainly know we could use more of those. 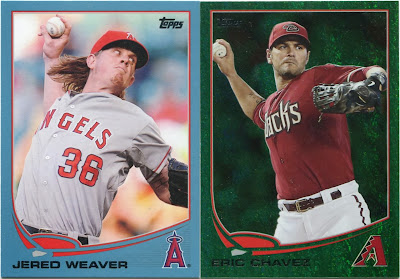 Topps hit an absolute home run with their colored variations in 2013. 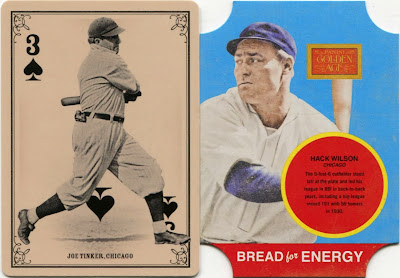 These are a couple of the coolest cards I've found in a trade package this year.

Both of these glorious Cubbies inserts hail from the 2013 Panini Golden Age series. Joe Tinker and Hack Wilson are both enshrined in Cooperstown, each having spent the majority of their legendary careers on the North Side of Chicago.

From what I know, these are both supposed to mimic a couple oddball sets from the pre-war days. It's one of the better innovations any card company has had this year.

It's things like this that make the Golden Age brand so fun. 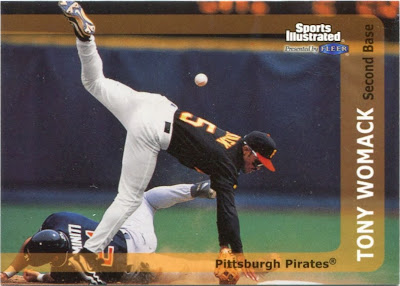 Brad also added a few pre-2013 randoms to his slew of awesome cardboard.

Tony Womack is a guy who seemed to get great cards on a shockingly consistent basis. 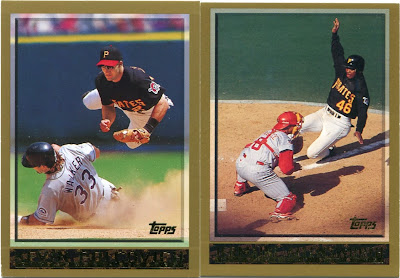 Speaking of shocking, here's a few terrific shots from 1998 Topps.

A set which, you may remember, recently earned the dubious honor of being my least-favorite Topps release of all-time. While I'm not going to rescind that distinction any time soon, I will say that these are a couple spectacular "double dip" and "play at the plate" pieces.

I don't know about you, but shadows always seem to make cards about a million times better. 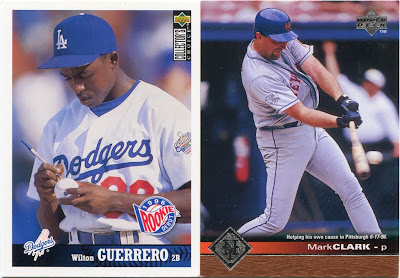 Also among the mini-collection hits were "autographs" and "pitchers at the plate".

As Upper Deck noted on that particular card, Mark Clark "helped his own cause" on that June 17th, 1996 game against the Pirates.

Maybe that'd be a better label for my "pitchers at the plate" mini-collection.

I'll have to think about it. 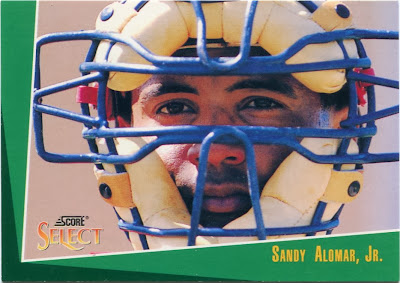 The world needs more of these "extreme close up" catcher's mask shots.

In a weird turn of events, this beautiful Sandy Alomar card was beat out by... 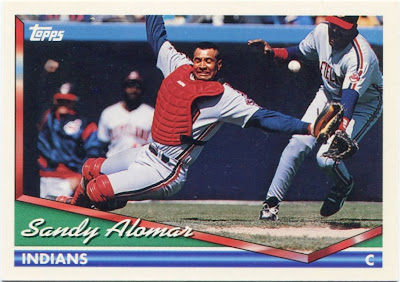 I'd actually been plotting to make this one a future "Dime Box Dozen" need for a while now. I'm not exactly sure how I didn't already own a copy of it by now.

To be fair, the Indians would go on to have some great seasons in the mid '90s. Even so, I still can't help but think of some of the more bumbling earlier scenes in Major League when I look at this card.

Alomar looks to be in the process of taking a tumble. The baseball appears to be making a beeline for that poor Cleveland infielder's face. All while two out-of-focus Indians look on from the dugout in disgust.

You can file this one under the "blooper reel" chapter of baseball card history.

All in all, I'd say Brad sent along a spectacular haul. And it pretty much all started with one of those jersey cards.

I guess memorabilia does have its benefits.
Posted by Nick at 1:30 PM