Under the tree, Pt. 1: Scratching the itch 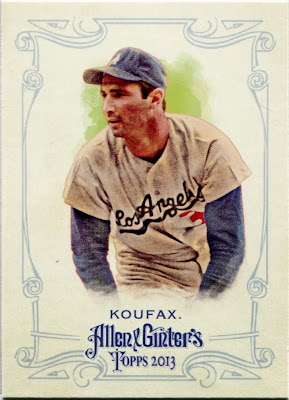 Another Christmas has come and gone.

I was fortunate enough to spend time with family on both Christmas Eve and Christmas, which is really what the holiday is all about.

But, yes, I did receive quite a few great gifts along the way. A decent amount of the cold, hard cash I got will no doubt be going to cardboard at some point. As will both the Target and Wal-Mart gift cards I received.

Oh, and I just so happened to win 20 bucks off some lottery tickets, money which has already been used to place another Just Commons order.

While money and gift cards are indirect suppliers of cardboard, I also landed myself quite a few direct card presents as well.

The winter months are usually a dry spell for me in terms of busting packs. From about October to January, most of my minimal retail purchases are relegated to repacks and the like.

However, my mom came through big time by putting a blaster of 2013 A&G under the tree for me. I've gone on record by saying that I wasn't all that impressed with this year's Allen and Ginter, but I'm definitely not going to turn down a blaster of the stuff. 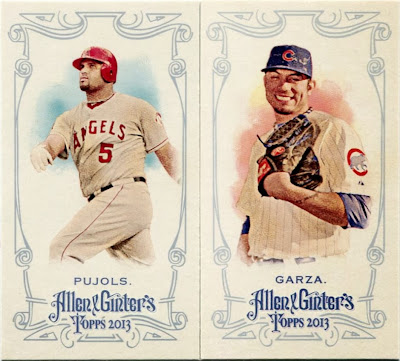 The thrill of uncovering that mini in every pack is still part of A&G's charm.

Even though the design might not be all that great, the minis are still a lot of fun. They have been ever since the set's revival in 2006.

Both of these puppies are going straight into my player collections. 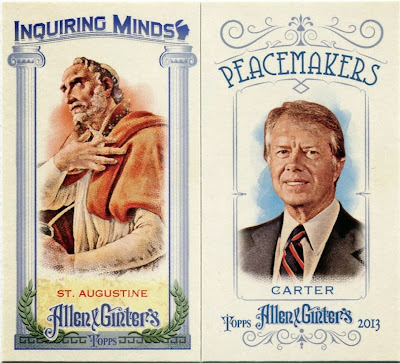 While I prefer my minis to feature actual ballplayers, I'd be lying if I said that I didn't enjoy these two insert checklists quite a bit.

The Carter is a new addition to my "Presidents" collection, while the St. Augustine is another step in my feeble attempt to complete this year's "Inquiring Minds" series.

My goal is to have that done by the time 2014 A&G hits the shelves. 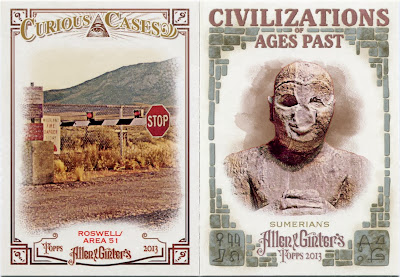 Trouble is, that Roswell card is the first one I have from the set. While I'm not big into aliens and sci-fi and all that stuff, that's still a pretty neat piece.

On the other hand, I'm in no way chasing the "Civilizations of Ages Past" series. I just wanted to note how utterly scary that particular insert was.

It may well be the freakiest card I've ever pulled from a pack of cards. 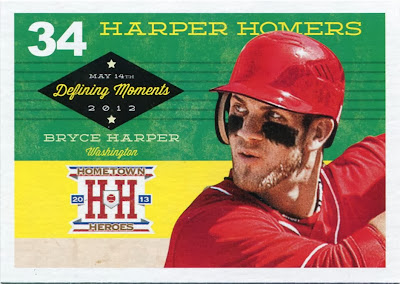 Panini Hometown Heroes has come through in a big way this offseason.

It's given me something to bust during the normally dry winter months. Packs of them seem to magically fall into my cart during every trip through Target's card aisle. I honestly can't get enough of this set.

Apparently, my mom took notice. She does actually listen when I babble on about cardboard sometimes, something for which I wholeheartedly appreciate. (Today just so happens to be her birthday, by the way.)

Happily, she remembered the Hometown Heroes, as five packs of the stuff wound up in my stocking.

Among the goodies was this neat "Defining Moments" insert of none other than Mr. Bryce Harper. 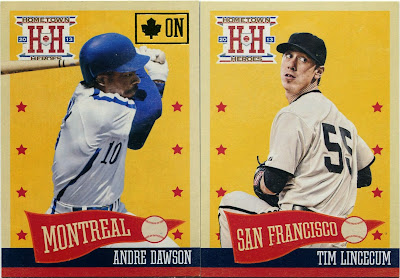 As I've mentioned before, the base design is a big home run for me.

I'm especially fond of that Dawson "State" parallel, one that notes Montreal's home in the Canadian province of Ontario. (I guess both Panini and I need to work on our geography. Montreal is actually in Quebec, not Ontario.)

It's hard to not like a card that features the symbol of our friends north of the border. 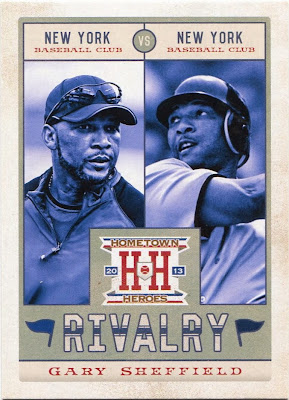 I'm a big fan of these "Rivalry" inserts.

The concept is pure gold, in that it features guys who played for different teams in the same city during their careers.

He's not particularly well-remembered with either squad, but playing for both teams in the Big Apple is an impressive feat in itself. 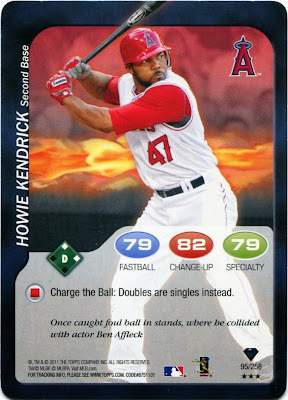 As usual, Dad came through in a big way this year.

He put together his usual assortment of COMC goodies for me this Christmas, one that was complete with a slew of utterly awesome vintage. But more on that in a later post.

For now, we'll focus on the wax he managed to track down. According to pops, all the packs he bought for me came from K-Mart, of all places.

In one of our conversations, I mentioned that I'd found a discounted rack pack of 2006 Fleer there for about three bucks.

Apparently, my dad took note and went to check it out for himself. The results are leading me to believe that K-Mart's card aisle may be a force to be reckoned with. (In fact, I went back there the day after Christmas and found a neat retail-exclusive 50-card Phillies set for five bucks. Definitely worth it.)

Among the K-Mart finds was a 100-card repack. I had a ton of fun ripping through it, but it didn't result in much card-wise. I did find a few Topps Attax singles inside, a game which has always remained in the shadow of MLB Showdown for me.

Speaking of which, my dad and I played a special three-game holiday MLB Showdown series the day after Christmas. My dad won it, two games to one.

Ah, the agony of defeat. 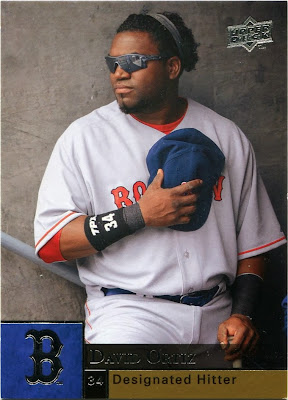 My dad also managed to pluck a discounted rack pack of 2009 Upper Deck off the K-Mart shelves.

I've always found it to be a perfectly acceptable set. As of right now, it's the last licensed checklist that UD ever produced.

My favorite of the bunch had to be this one of Big Papi, one that is a treasured new addition to my new "anthemic" mini-collection. 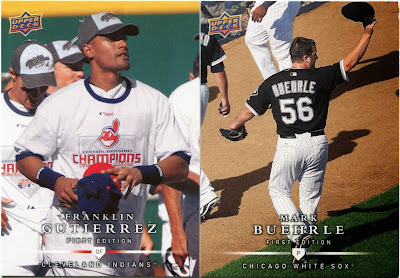 This Christmas proved to be quite blaster-riffic.

Pops scored a blaster of 2008 Upper Deck First Edition for about 75 percent off its original value. I've said in the past that I'd put UD's 2008 release up there with their all-time best.

First Edition was basically a carbon copy of Upper Deck's Flagship release, but one that nevertheless does feature quite a few cool photos.

I could've shown a number of neat shots from my blaster's worth of the set, but I'd have to say these were my two favorites.

I've found that I'm quite partial to shadows on cardboard, something that's in full force with the Buehrle. 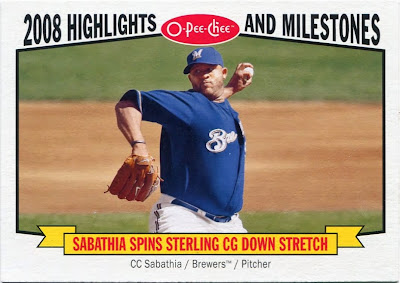 Perhaps the biggest surprise of all was the fact that my dad found a discounted blaster of 2009 Upper Deck O-Pee-Chee on the K-Mart shelves.

I've always been a big fan of the "one and done" OPC brand. Taking Flagship sets aside, it's the closest thing we've seen to a Topps Total-like set since...well, Topps Total.

The minimalist nature and rather large checklist makes every card a surprise. And, as if that weren't enough, a blaster of the stuff contains a whopping fifteen six-card packs in all.

Seeing as how there weren't a ton of cards produced of him in Milwaukee, I enjoyed this C.C. Sabathia insert quite a bit.

After all, his tenure with the Brewers has to be one of the more dominant "Short Term Stops" stints in baseball history. 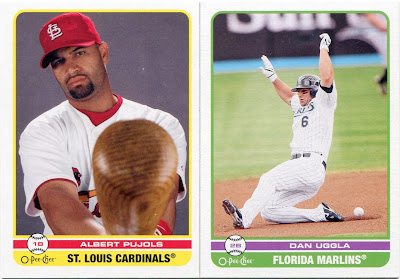 As I mentioned, the meat of O-Pee-Chee is almost all in the base cards.

While the set does feature a substantial amount of uninspired studio shots, it's the deviations from the norm that make it so memorable to me.

As Albert Pujols is quick to note, however, studio photos don't have to be boring. That's one mean "bat barrel" specimen right there.

If the Uggla is any indication, OPC features quite a few nice in-action shots as well. 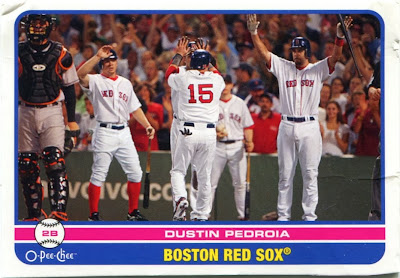 Here's another example of that very point.

If the fifteen packs inside weren't enough, the actual blaster packaging itself features a couple box bottoms you can cut out for yourself. While the pack rat in me wanted to keep the box intact, I ended up removing the two cards on the outside of this blaster.

That Pedroia is a beauty that just had to be displayed in one of my nine-pocket pages. It also wears the battle scars of sitting on a retail shelf for more than four years.

In what proved to be a happy ending, my dad swooped in and found it a nice home in my collection.

After all that, I guess I can't complain about not being able to bust any packs during the offseason.

Thanks to the efforts of both my mom and dad, I think Christmas more than took care of that this year.
Posted by Nick at 1:44 PM

Ah, the State parallel of Dawson. The card that almost got me off on a rant at the Expo that most certainly would have got me booted from the Panini area at the show.

Although I'm thinking if they used the outline of Ontario on that card instead of the plain ol' Maple Leaf, I would not have been able to contain my geographical ire.

I'm not an expert on Canadian geography or anything, but isn't Montreal in Quebec and not Ontario?

I also have to say that I like those Civilizations of Ages Past cards as well. I don't like them enough to actually purchase A&G cards, but I may try and track those down someday.

Your mom and my mom share a birthday. But she ain't buying me no cards.

And, yes, Montreal is in Quebec. I've been there a few times and when you get there, there is a sudden increase in the amount of people who speak French.

K-Mart was by far the best location for picking up discounted blasters and such on my summer vacation. Wish we had one around here (and your Dad to do the shopping!). I'd love to grab me another OPC blaster. Got one two years back but haven't seen one since.