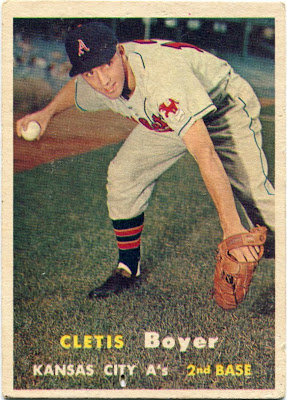 One thing I love about this hobby is how easy it is to develop an identity within it.

There really isn't a wrong way to collect cardboard. Anyone who tells you otherwise is just plain ignorant.

Once you make that grand decision to pick up the hobby, you're free to do what you want.

Some people decide to collect certain teams. Others chase after specific players. Long ago, I decided to try and sample a little of everything. I figured I'd develop certain opinions along the way.

Even with the diverse amount of different ways to collect, majority and minority tastes still managed to pop up around the hobby. While it's nice to be with the majority opinion, I know I'm partial to the minority at times.

And, with a few select topics, I sometimes feel that I'm all alone. I'm sure all of us have those few guilty pleasures that everyone else seems to bash.

My favoritism towards 1995 Fleer has been well-documented on this blog. It even got a few fellow '95 Fleer lovers to come out of the woodwork. Still, I knew it was a widely-hated set from the start.

It was the exact opposite with 1957 Topps. For a long time, I assumed that most people loved it. It's always been one of my favorite sets of the '50s, if not of all-time. The photos feature some of the most vivid colors you'll ever see on a baseball card.

After a while, and especially after I started posting about my love for '57 Topps here in the blogosphere, I quickly learned that it really wasn't all that well-liked around collecting circles. It seems like at least 90 percent of people could care less about it. 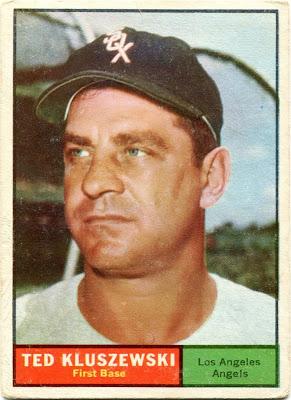 Then there's the other side of the coin.

I've seen 1961 Topps receive quite a bit of praise throughout my blog readings over the last two-plus years or so. For me, though, it's always been one of those sets that has simply been there.

It'll always earn vintage points in my book, but I can't say it's one of my favorite Topps sets. In fact, I'd probably put '61 Topps near the bottom rung. I've always found the design to be quite bland and not all that innovative.

I guess I'm just alone in my principles. 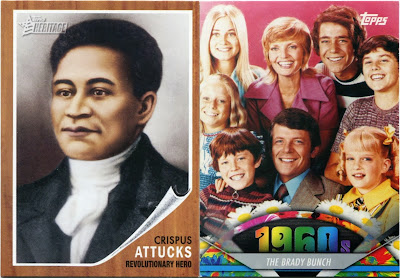 If you want to talk about apathy, though, I'll point you to a couple recent non-sport releases.

I have a fairly substantial non-baseball collection sitting right next to me on my nightstand as we speak. (I'll have to post a picture of it on the blog one day.)

Among the group's highlights are complete sets of both 2009 American Heritage and American Heritage Heroes Edition, as well as the entire 2011 Topps American Pie checklist. They're the only base sets I've ever specifically sought to complete, baseball or not.

I had to build most of my American Heritage sets through busting packs upon packs because I couldn't find anyone who had any for trade. My local Target was literally the only way to go.

To me, 2011 Topps American Pie will always earn special recognition because it was the first set I ever reviewed on this blog. I can probably count the number of other times I've seen it mentioned around the blogosphere on one hand, though.

These sets were barely a blip on anyone's radar, but I tore into them like there was no tomorrow. 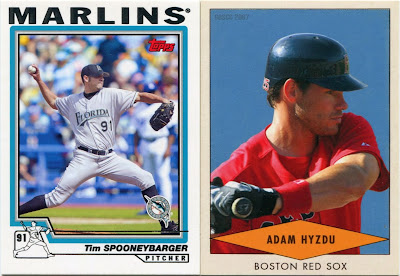 If you're a regular reader of this blog, you probably know about my rather lengthy player collection catalog by now.

Through my sampling over the years, I've narrowed (I use that term loosely) my player search to probably a couple hundred guys. And I've been adding quite a few more to the roster lately.

Now, while I'm definitely in the minority there, I know there are others around who are just as wild with their player collection quests as I am.

However, I can't help but think that I'm the only person who passionately collects Tim Spooneybarger or Adam Hyzdu. I chase after a fair amount of "YOU COLLECT WHO??" players, but these guys have to be the most obscure of the obscure.

So, if you have any extras lying around, feel free to send me your spare Spooneybargers and Hyzdus.

You'll give them a good home. 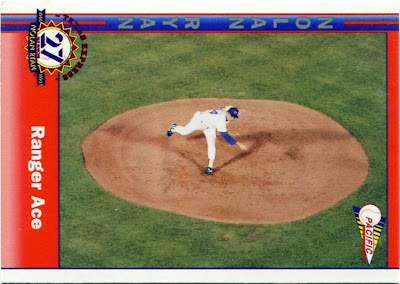 Despite what the media would have you believe, there are still a fair amount of people my age (and younger) in the hobby these days.

I seem to see more with each passing card show, in fact.

It is true, however, that almost none of the younger generation of card collectors have the dime box-like mentality that I've stuck with through all these years.

I honestly can't remember the last time I saw someone my age digging through a discount box. It's almost always been more middle-aged guys.

Forgive me if I sound too preachy here, but I do wish more collectors my age at least dabbled in the dime box market from time to time. In my experience, most young adults seem to flock to the game-used and autographed tables at shows and away from cool so-called "junk" cards like this Nolan Ryan.

If you ask me, that's a bubble in the hobby that probably won't sustain itself for much longer. And I fear we might lose a lot of the younger collecting population once those vanish. 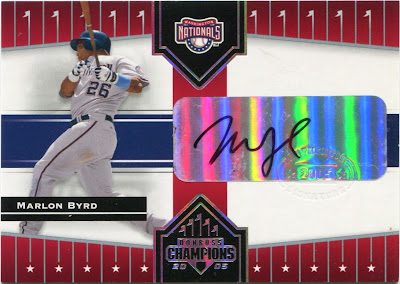 For a long time, I thought I was alone in my feelings towards memorabilia cards.

After about a year-long journey of collecting almost exclusively autographs and jersey singles, I became a full-fledged dime box-aholic. Trouble was, I thought I was one of the extreme few who could enjoy the true pleasures of a discount bin.

Once I started blogging, though, I happily discovered that I'd been wrong all along. There are people around who don't really care about autographs or jerseys in today's memorabilia-driven market.

I think that's why I've kept up this little blog for almost two years now.

While we all have our little quirks and guilty pleasures when it comes to collecting, I'm sure most of us can take solace in the fact that we're part of a large community of lifelong cardboard fanatics.

I really should grab one of those Brady Bunch cards. It is probably the closest I'll be able to come in adding a card of Florence Henderson to my 2-14 binder.

someday I'll finish out the '75 style "Entertainer" cards in American Heritage. The Joe Namath is one of the best 'baseball' cards I picked up this year.

I about dropped a dime (pun intended) when I seen that Nolan Ryan card. I just busted the seal on that very set, and the Seaver set too today. And set a few aside for you, talk about weird.

I always liked the American Heritage set, but it was before my blogging time.

As far as 1961 Topps goes, its only redeeming value for me is the birth of the rookie cup. Yes there was the weird looking 1960 set, but 61 was the first real trophies on a card. Take that away and 61 is a bottom 5 set for me too.

You are definitely not alone on love of dimeboxes. I am with you 100%. In fact, I often dream of aisles and aisles of of the things. Although I can't say I'm with you on the non-baseball cards. Take the baseball out of the baseball card and there's not much left in my opinion.