Killing time at the LCS 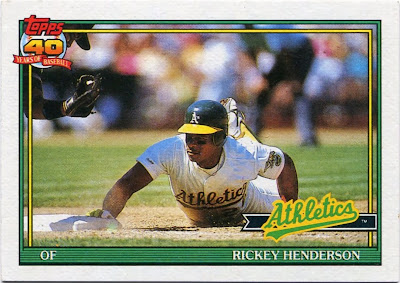 I don't take the numerous cardboard privileges I have for granted.

It's awesome to live about ten minutes away from a gigantic convention hall that houses a huge card show a few times each year. I'm lucky to have such an amazing local flea market a short drive away.

And, of course, I'm honored to have a great family who supports this crazy little hobby of mine.

If I could wish for one more thing, though, it'd be a for great local card shop. There used to be one around when I was a kid, but that place shut its doors long ago.

I'm eternally jealous of my fellow bloggers who have an awesome LCS at their fingertips. I miss the feel of a great brick-and-mortar card shop. It just feels like home.

Truth be told, though, I do have access to a card shop around here. It's a bit of a ways from where I live, but definitely not out of reach.

Luckily for me, it's only a short bus ride away from my new college. And, since I usually have a two-hour break from class on Wednesdays, I decided to take a trip up to the shop during one of my downtimes a few weeks ago.

I just wanted to kill some time.

Digging through baseball cards is a great way to do exactly that. 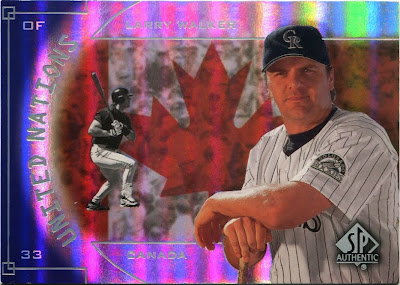 It's not a bad card shop, by any means.

The place is rather cramped, though. And I almost never see anyone else in there. Not a single soul walked in during the 45 minutes I spent at the shop.

While the owner is a really nice guy, he almost never gets new stock. The best I can do is dig into a few of his quarter boxes (no dime boxes, folks) and hope for something new.

I recognized a lot of the same cards I picked through the last time I was there, which was well over a year ago.

Still, I was glad to see he'd added a few new things to his quarter bins since then. The fact that I've started collecting so many more things since my last trip helped things as well.

In the end, I picked out 40 quarter cards for my collection, which was a much more productive use of my break than the nap I usually take in between my classes.

I wouldn't consider myself a Larry Walker collector, but I couldn't pass up a beautiful card like this for a quarter. 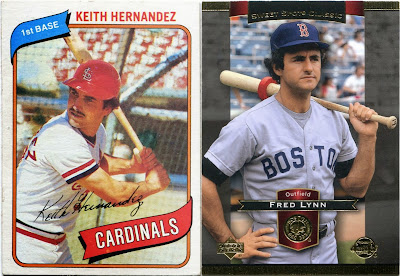 If there was a "Hall of Very Good", they'd both be enshrined there. Both had remarkable careers.

Stats-wise, though, they're ever so short of a place in Cooperstown. 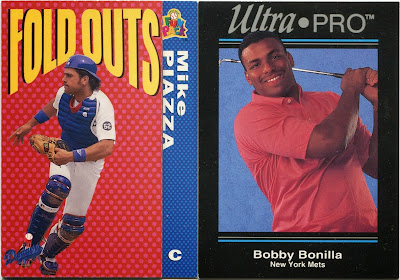 Perhaps the biggest thing that has changed since my last LCS trip is my unabashed love of oddballs.

While neither Mike Piazza nor Bobby Bonilla aren't all that high on my collecting totem pole, these were both no-brainers for a quarter.

Oh, and I guess that Piazza was supposed to fold out into a bigger picture at one point. I tried, but I got about halfway before realizing that the two parts were basically stuck together. I would've just about torn the it in half had I gone any further.

I guess twenty years of life in a box will do that to a card. 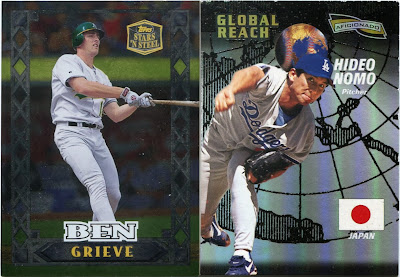 I wouldn't necessarily consider either of these oddballs, but they're definitely not your everyday pieces of cardboard.

In fact, that Grieve is one big hunk of steel. I never thought Topps fell for the whole Leaf-based steel fad that briefly made its rounds in the mid '90s. I thwacked that thing on my tabletop a few times just to hear that silly "ting" sound that cards really aren't supposed to make.

Also among the quarter bin finds was that beautiful Hideo Nomo insert. It comes from one of my personal favorite one-and-done sets in Pinnacle Aficionado.

By the way, don't look at Nomo's arm too closely if you have a weak stomach. 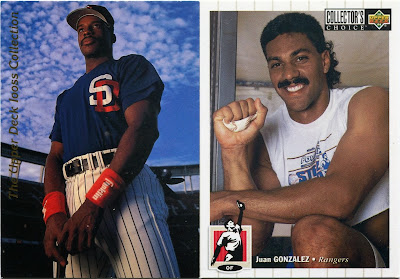 The majority of this quarter box consisted of cards from the '90s.

That pretty much meant that either one of two things were bound to happen. I'd either find shockingly beautiful cards like that McGriff, or painfully corny cards like the Gonzalez.

There isn't a whole lot of middle ground. 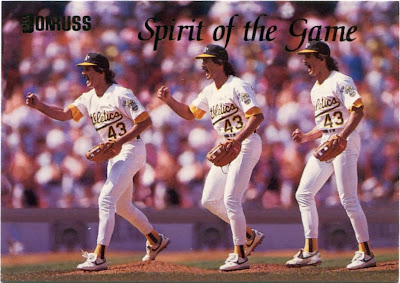 This one goes into the "shockingly beautiful" file.

If there was ever a man deserving of a "multiple-exposure" shot, it's Dennis Eckersley. 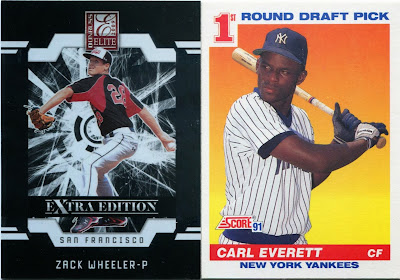 "Eck" wasn't the only mini-collection hit I'd find, though.

It seems like all my "look what I got!" posts culminate into my crazy mini-collections at some point. It's just how things work around here.

While Mr. Wheeler isn't actually pictured in a Giants uniform, I still consider that one to be a "zero-year" piece.

And, despite what his rookie cards would have you believe, Carl Everett would never play a single game for the Yankees. 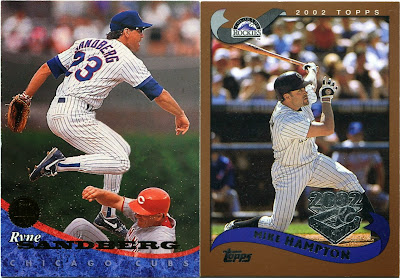 I gladly plopped down a couple quarters for these two "double dip" and "pitcher at the plate" shots.

The '94 Leaf "Ryno" was actually one of three double play cards I found of the legendary Cubbie in this quarter box. 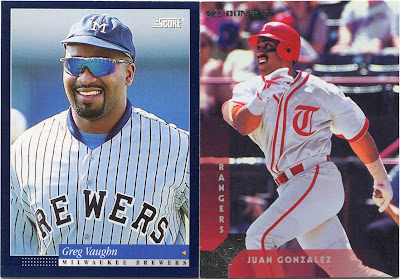 Those aren't real throwbacks. Who are these teams trying to fool?

Ah, screw it. I tend to place these cards into my actual "throwback" mini-collection regardless.

Even if they are just wanna-bes. 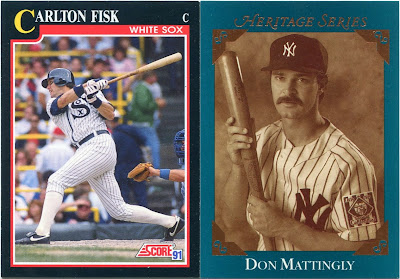 These, my friends, are real throwbacks.

One of my more unofficial quests has been to get a copy of every single White Sox throwback card printed in 1991. There's quite a few, and they all feature shots from the very first "turn back the clock" game hosted at Comiskey Park in 1990.

The Mattingly, on the other hand, is an extremely rare example of a Yankee throwback. The legendary pinstripes haven't changed much over the years.

According to the back, that's an actual 1939 Yankees jersey on Don Mattingly there. (Note the centennial patch.) 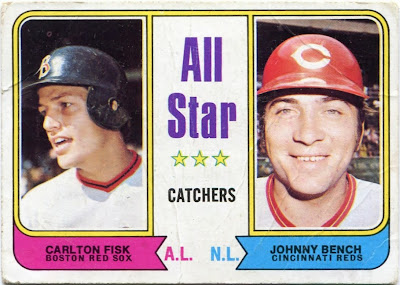 This was perhaps the greatest quarter find of them all.

It was certainly the most unexpected.

I've never been that big on multi-player cards, but this one is nothing short of fantastic. I'm proud to own one that features arguably the two greatest backstops of the 1970's.

As you might be able to tell, the previous owner(s) did "love" this card quite a bit. Note the abundance of creases on the front.

For a quarter, though, I couldn't get it go.

Sure, I wish I had a truly epic local card shop sometimes. One where the owner hosts giveaways and where I know all the shop's other customers on a first-name basis.

Still, a LCS like mine is certainly something worth supporting.

One card shop is better than none.
Posted by Nick at 6:11 PM

Augh! I've never seen that McGriff before! I'll have to look that one up, that is a beaut. That Wheeler is pretty slick, and the throwback Fisk has found a place in my binders as well, also nice.