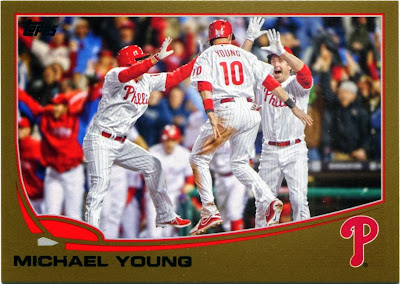 Here's a question to ponder.

It's something I've thought about on a few different occasions.

Innovation is certainly one thing, as I doubt jersey cards were barely a glimmer in anyone's eye during the early '90s. (And that would've suited me just fine.)

For me, though, photography is the biggest gap between the two eras. Specifically, the quality of photography.

As great as vintage is, a lot of the shots were the same tired poses. You may have that one outside-the-box photo every once in a while, but it was pretty monotonous most of the time. (Save for '73 Topps, anyways.)

Also, the focus on each photo is a lot better these days. The vintage years are riddled with oddly-cropped and wildly out-of-focus shots.

I've heard people complain that some cards nowadays are too crisp, which shows just how far the photography medium has come.

I recently received a nice batch of awfully crisp 2013 Topps parallels from Nathan over at the great blog "Big 44 Sports Cards".

You just didn't see shots like that Michael Young in the vintage era. 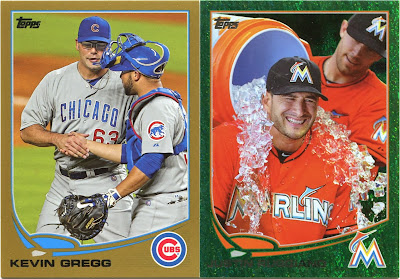 The same can be said about these two.

To be fair, I doubt ballplayers dumped buckets of ice water on each other during postgame interviews in 1977.

While that might be for the better, there's no denying that the Ruggiano is up for "Card of the Year" consideration here in 2013. 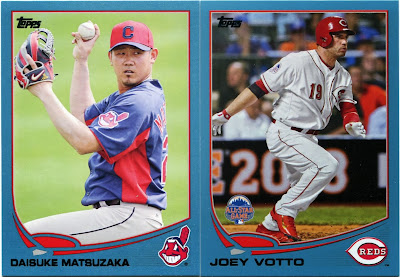 Nathan also sent along a few Wal-Mart parallels from this year's Update.

As I've mentioned before, that Matsuzaka is a hallowed "zero-year" card. He never played a single game for the Indians in 2013.

It's great to finally have that one in parallel form. 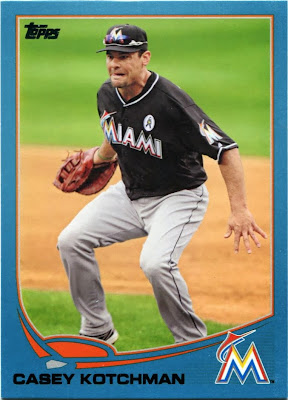 Obviously, not all modern cards knock it out of the park with their photography.

Far from it, actually.

Even in this photographically-advaced age, you're bound to have unsightly shots like this pop up quite a bit.

Nevertheless, it's a Casey Kotchman card, which means I must have it. With this one, I'm now four pieces into the Update Kotchman rainbow. I've nabbed six cards in my half-assed quest to complete his Flagship rainbow.

Kotchman played in all of six games with the Marlins this year.

If I can get that many versions of his Update card, I'll call it a success. 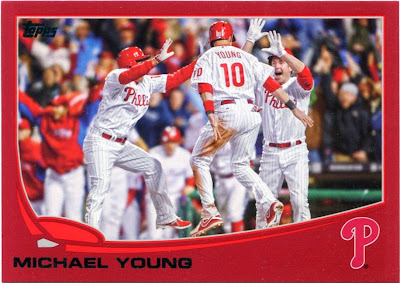 Coincidentally, I had yet another version of Michael Young's 2013 Update issue arrive on my doorstep not long ago.

This time, it came from Jeff, a longtime blogosphere reader and author of the terrific new blog "One Man's Junk (Wax)".

I think this spectacular piece looks even better with the red borders. 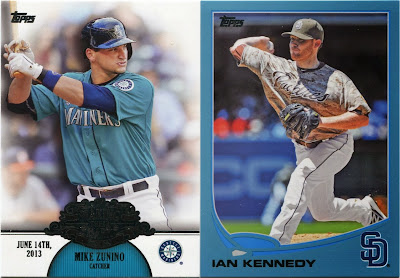 Also included were a few other miscellaneous Update inserts and parallels I needed.

After a couple years away from it, I'm hovering on the brink of making a return to fantasy baseball next year. I don't know why, but I'm expecting Mike Zunino to have a breakout season for the Mariners in 2014.

Maybe I can steal him in the late rounds.

If I decide to get back in the fantasy game at all, that is. 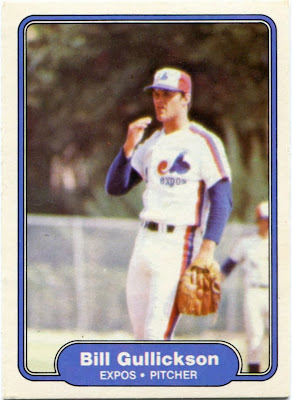 The meat of Jeff's mailer, however, came in the form of a stack of '82 Fleer.

If you've talked with Jeff at all, you might know that he's a big fan of the set. As am I.

Because he offered to send a few '82 Fleer my way, I told Jeff to simply pick out a few random ones he thought I might like. He ended up taking that idea to a whole other level.

Jeff decided to send along the most out-of-focus '82 Fleers he could find. As you might know, the set is renowned for its unbelievably blurry photography.

I still can't help but wonder how people looked at 1982 Fleer back when it originally hit the shelves over thirty years ago. 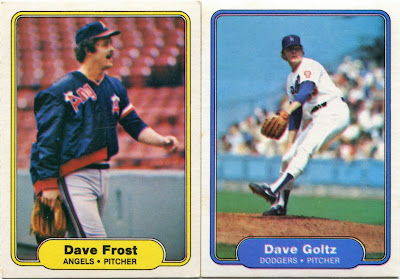 Did people notice the blurriness then?

Was it really that out of the ordinary for the time period?

Nowadays, we look at it rather quizzically, but maybe it wasn't all that awful for the early '80s. You're bound to find quite a few fuzzy photos from Topps and Donruss during the time period as well.

It's safe to say that something like this would probably never fly here in 2013. 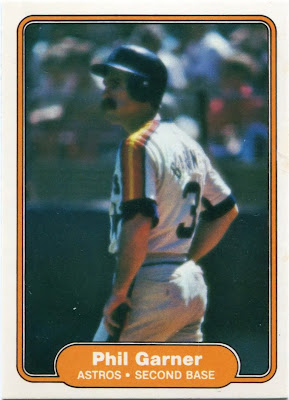 Most of us are simply too used to the squeaky-clean photography these days.

I can't help but think that this Phil Garner is the single most out-of-focus shot in the '82 Fleer checklist. I'd had a copy before this package arrived, but Jeff's inclusion of it is what really alerted me to the heightened fuzziness of this particular photo.

I feel like I need reading glasses to see it clearly.

I'm all for the crisp photography we have here in 2013. There's no doubting that.

Sometimes, though, it's nice to be a little out of focus.
Posted by Nick at 4:11 PM

Some of the good: Well part of the sharp photo difference is the advancement of photo technology. Also the quality of the cardboard/paper is better and for the most part now-days they use acid free card stock which will stay preserved better. Collectors are keeping better care of their cards mostly. Well except those who throw cards into a PWE unprotected by anything.

Bad: 1,000s of inserts and parallels that are so similar to the base card it is hard to tell what the real difference is... OH his name is printed with gold leaf instead of silver leaf, Oh the chrome is a little more silver than normal.
Also "turn around collectors" The people who say they are collectors but they just buy cards in boxes and packs for the thrill of opening them and then turn around and sell everything to try to make some quick $$$, keeping nothing.
Redemptions! Need I say more?

Some of the newer innovations and "gimmicks" are pretty cool, but not when you include it every single year with thousands of variations on it.

It is almost impossible to be a "set collector" anymore.

Nick, I have my reading glasses on, it doesn't help, still blury LOL.

The biggest difference in photography is the advent of digital photography. In the 70s and 80s, if a photographer didn't have skill it showed. Now any idiot with a phone can take thousands of photos and pick one. A stopped clock is still correct twice a day.

Yes, people noticed the blurriness and odd cropping in '82 Fleer. It was mentioned in the old Baseball Card Magazine in 1982, and we noticed it when we were pulling cards out of packs. It was substandard even in the era of "inferior" photography.

I agree with CFTQ. It's pretty damn easy to take a decent photo these days. It's too bad the hobby had to muck up so many other things when the photography is so good (I still say the cardboard was better then).

Also, some of those old posed photos brought out the character in the players. That's sometimes lacking in modern sets.

That Phil Garner is amazing.

Being a geezer old enough to remember pulling '82 Fleer out of packs, I can tell you that, yes, the blurry photography was noticed. But it was the feel and smell of the cards, compared to Topps, that really stood out. The Fleer cards felt... gritty. I guess it was some sort of powder or something (probably toxic, come to think of it) that they used to keep them from sticking together or something. I'm sure that also contributed to their odd odor. The lack of gum as a "deodorant" probably didn't help either. But they were attractive, in a way. Whiter, and the stock was more crisp. In a way, they felt more like the future than Topps cards did. But even at 12 years old, I felt like newer isn't always better. I dug the variety though.

Great post. I totally noticed that some cards were more blurry than others in the early 80's. As for a preference... I think it depends on my mood.

Sure newer cards offer awesome, crisp photos. But what I love about vintage cards is that when you come across a card that's nicely cropped with a great looking action shot there's something artistic about it.