When it rains, it pours 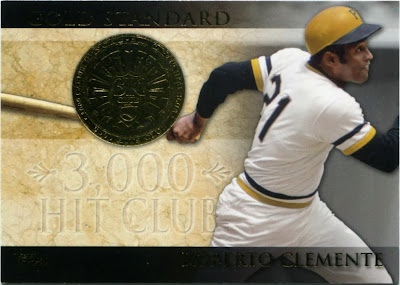 I have a theory when it comes to baseball cards.

When it rains in this hobby, it pours. For the most part, there's not much middle ground.

I don't know of too many people who just casually collect. You're pretty much intensely into the hobby for the long haul, or you're not in it at all.

Sometimes, I come up with a batch of post ideas in one night. Other times, I have trouble stringing together a tangible sentence.

And, as I've found, trade packages don't seem to consistently trickle into my mailbox one or two at a time. I go a couple weeks or so without getting anything, and then, boom...a smattering of about four or five arrive on a single, glorious day.

That was the case a few weeks ago. After a period of little trade activity, I received five packages and a PWE in the mail in one day.

One of those packages came from Kyle, author of the great blog "Nolan's Dugout". He hasn't been blogging as much lately, but it's nice to see that he's still active in the trading market.

Kyle proved another point to my little theory. People don't just send me one or two cards from my "set needs" page. 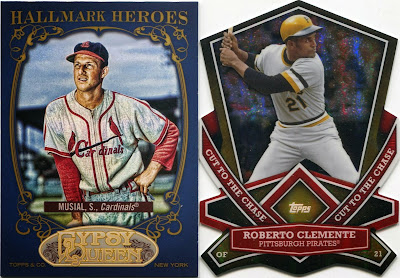 It's obvious that Kyle combed through my want lists very carefully, which I greatly appreciate.

He sent over a whole batch of needs, including a couple fantastic Roberto Clemente inserts. (Including the one at the top of the post.)

But he didn't stop there. 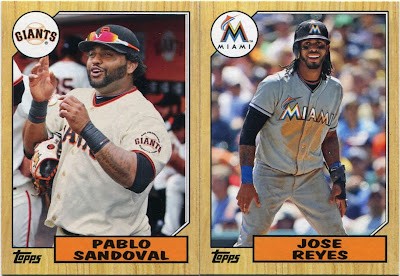 Kyle also helped get me a couple steps closer to landing all of last year's 1987 minis I need for my binders.

Maybe it's just me, but it sure seems like Pablo Sandoval is smiling on all of his baseball cards. 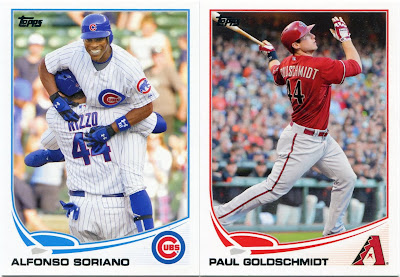 Among the contents of this trade package were the final base cards I needed from Series 2.

That Soriano is one of my nominees for "Card of the Year". I think I actually won a copy for a few credits during my Listia days, but it never showed.

I'm glad Kyle was around to correct that seller's mistake. 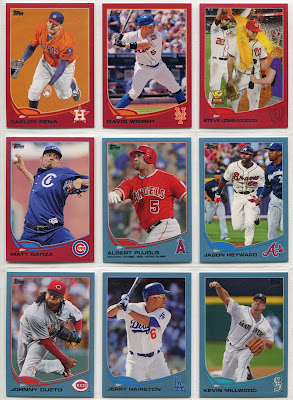 Also included were a slew of 2013 Flagship parallels, both of the Target and Wal-Mart variety.

That fantastic Lombardozzi looks even better with a red border. 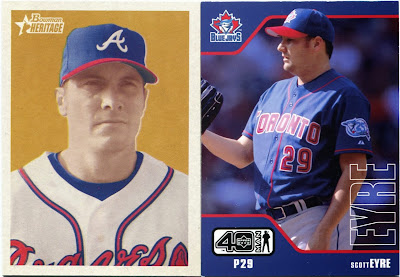 One of the great things about this trade package was the fact that Kyle didn't limit himself to my "latest and greatest" needs.

He went back and really dug through my older wants, ones that other people almost never seem to have.

Yes, I may be the only person on Earth who specifically collects guys like Ryan Langerhans and Scott Eyre.

In fact, that's my very first card of Eyre in a Blue Jays uniform, courtesy of Upper Deck 40-Man. I often call it the poor man's Topps Total due to the fact that it featured a massive 800-plus-card checklist. (The "40-Man" name refers to MLB's 40-man rosters.)

Then again, packs of 40-Man were a couple bucks more than Total at the time, so I guess the analogy doesn't make much sense. 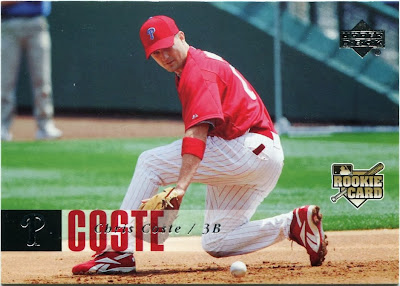 Chris Coste was a minor sensation in 2006, finally making his big-league debut after 11-plus years in the minors and independent ball. He was 33 at the time. (He also started his career in an independent league after being undrafted.)

What I like about this particular card, though, is the fact that Coste (a catcher) is listed as a third baseman. He never played a single inning at the hot corner in his big league career. (Though he did play quite a bit of third in the minors.)

It may not seem like much to others, but this is one of those cards that I've wanted for a while now. 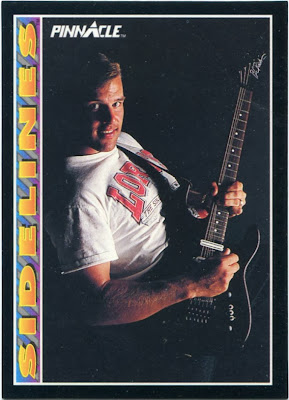 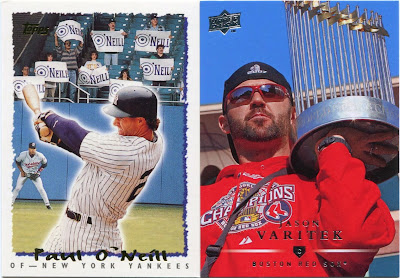 As is the case with these two.

That's because I received the exact same trio of "Dime Box Dozen" needs from fellow blogger Douglas in an envelope that arrived a mere day or two before Kyle's package.

When it rains, it pours. 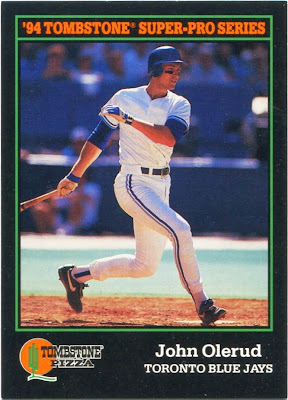 I think that's true with oddballs.

These seem to come in droves, rather than one or two at a time. I think my recent card show experience is a good example of that.

Kyle sent along a nice lot of oddballs from some of my most treasured player collections.

John Olerud has always been one of my favorite guys to collect. I probably own more cards of him than anyone not named Guerrero or Ichiro at the moment.

Even so, this fantastic Tombstone Pizza oddball is a sparkling new addition to my Olerud collection.

I see a lot of '92 Pinnacle influence on this design. 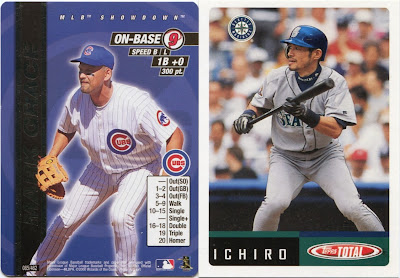 The oddities didn't end there, though.

As I've mentioned many times before, MLB Showdown was a special part of my childhood and early adolescence. I played it non-stop. If we're talking pure gameplay, that Grace isn't a particularly good card. (It comes from 2000, the first of MLB Showdown's six-year run.)

On a personal level, however, it's a terrific piece. My MLB Showdown cards are one of the few that don't get placed in my regular team binders. Since I could never bring myself to separate them, I have a special box for all of my MLB Showdown singles.

The Ichiro may look like a regular Topps Total base card. A quick flip to the back reveals the number "PP-2", which reveals its label as a "Pre-Production" insert from the set. It's like a prototype for the greatness that Total was about to unleash on the world back then.

Now that's a cool card to have. 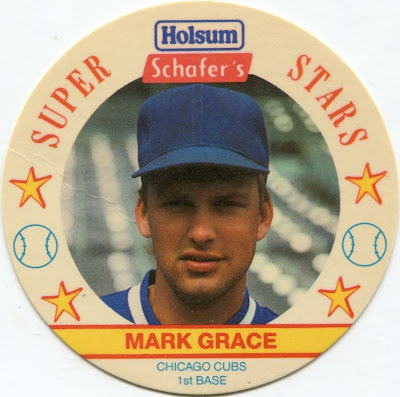 Like my MLB Showdown singles, disk-shaped cards don't go in my binders, either.

They're just a hassle to store in standard nine-pocket pages. Still, that doesn't mean I like them any less.

In fact, cards like these are among my favorite oddballs to get. Baseball cards really do come in all shapes and sizes.

Apparently, these were issued with loaves of Holsum Bread back in the late '80s.

It's one of the few wheat-based oddballs in my collection, one that I was ecstatic to see turn up in Kyle's assortment of cardboard.

Right now, I'm going through a bit of a cardboard lull. I just got done with a massive card show, and I haven't received a trade package in a while.

If I've learned anything, though, it's probably just a calm before the storm.

Are you telling me that after I worked for years to complete the 990 card bear that is 2002 Topps Total, there are three more pre-production cards I can get?

[Pause while Joe signs on to COMC and buys all three]

... I have to say, that's one of the things I love about the blogosphere... You never know when you'll run across something else you want!