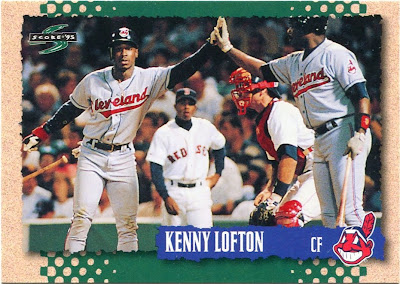 It didn't take long for the Just Commons bug to hit again.

I wrote about my big initial order from the place a couple weeks ago. The very same day that first batch arrived, I made yet another Just Commons purchase.

This one was a bit larger in volume, totaling 175 cards in all. It set me back about 28 bucks, about $5 more than my first foray through the site.

Even though their free shipping promotion kicks in once your order hits $10 in total, I ended up going way, way beyond that with my first two Just Commons buys. Especially this one.

Still, I could've easily dropped just as much on a blaster and a rack pack at my local Target. And, just like my first Just Commons purchase, retail wax couldn't hold a candle to the cards I hand-picked from the site's inventory.

What you'll be seeing tonight is only the half of it.

I still can't decide which of my two Just Commons buys was actually better. I'll let you be the judge of that.

We kick things off with a card I've wanted ever since its appearance in Night Owl's "Awesome Night Card" series. There's still a bit of question as to exactly which contest this photo comes from.

There's no doubt that it's one of the better Kenny Lofton cards I own, though. 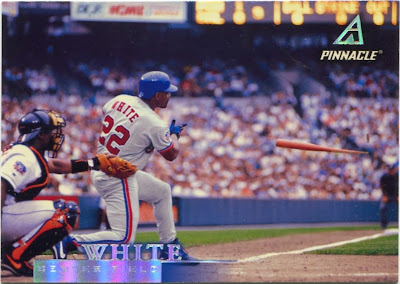 Since Just Commons doesn't have a photo inventory, I had to use an external source to scout potential purchases.

That's where "Check Out My Collectibles" came into the picture. Their prices for simple base cards are shockingly overpriced. Even so, that didn't stop me from using their photo-based archives in helping me score some great Just Commons deals.

So, an inadvertent thanks goes out to COMC as well. You didn't get any of my money, but you did help me put it to better use. 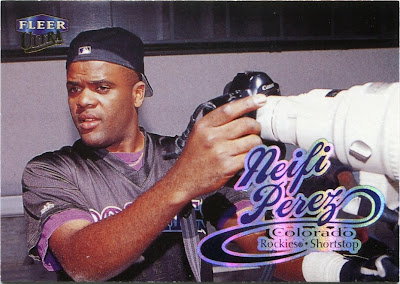 Or that Neifi Perez is shown "behind the camera" on his 1999 Ultra card.

Without COMC, great pieces like these would've slipped through the cracks. 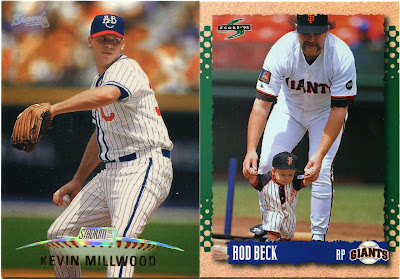 Still, you simply can't beat the prices at Just Commons.

They blow every other site I've seen out of the water in that regard. I don't think I paid more than 20 or 30 cents for any of the cards you'll see in this post. The vast majority, in fact, fell more between the 10-to-15-cent range.

That includes the two spectacular mini-collection hits you see above.

In fact, Kevin Millwood is sporting the very same Atlanta Black Crackers throwbacks I recently mentioned on this blog. 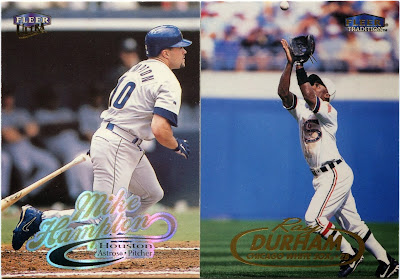 With the fantastic "pitcher at the plate" shot, Mike Hampton filled another mini-collection need of mine. The guy had a .246 career average, which is a better mark than a lot of position players managed to post.

He certainly wasn't a slouch at the dish. 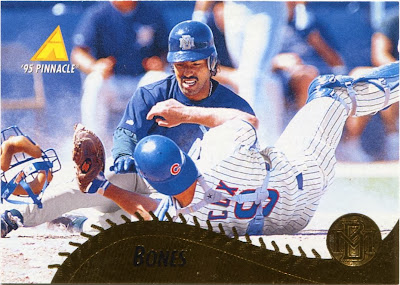 Here's something you don't see everyday.

This is the rare case of a pitcher being given the spotlight on a "play at the plate" shot. Ricky Bones is seen here sliding into an unsuspecting Cubs catcher.

Cards featuring hurlers on the basepaths are certainly rare in this hobby, but not impossible to find. Pitcher PATP shots, though, can probably be counted on one hand. I can only think of one or two others in addition to Mr. Bones.

As I've found, 1995 Pinnacle was a pretty exciting set in terms of photography. 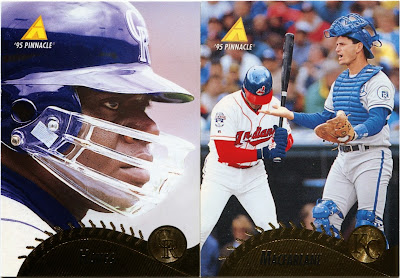 Because of that, I couldn't help but go on a little '95 Pinnacle run during this latest Just Commons purchase.

The Hayes has to be the tightest facemask shot we've ever seen in this hobby. I'm becoming more and more taken by the MacFarlane with each passing viewing.

From the looks of it, his battery mate shook him off one too many times. 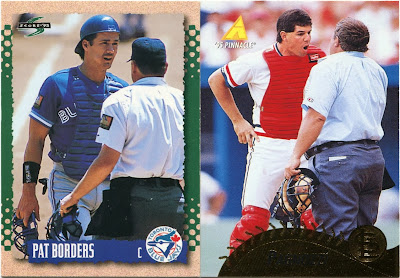 Both of these backstops made for great additions to my scarce "Say the Magic Word" theme.

One of these arguments looks to be a bit more heated than the other. 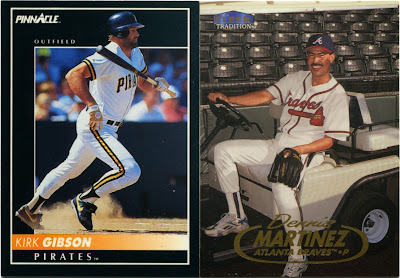 I gleefully added a few "Short Term Stops" to the Just Commons fun as well.

Kirk Gibson spent just 16 games with the Pirates in 1992. And, in a stop I didn't know about until fairly recently, Dennis Martinez spent 53 games in his final season with the 1998 Braves.

"El Presidente" at the wheel makes for one of the more humorous "sunset" cards I own. 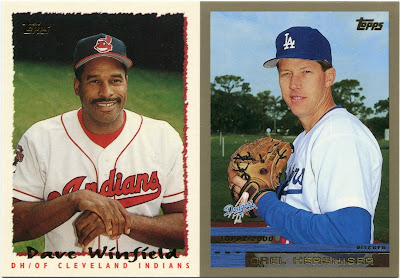 It wouldn't be the last "sunset" this buy would entail.

Although a few other card companies gave him a true finale in 1996, Topps failed to grant Dave Winfield a rightful send-off. Thanks to a massive oversight on their part, Winfield's final Flagship issue is found in the '95 Topps checklist.

On the other hand, Topps produced the only card I've ever seen of Orel Hershiser during his second, little-known stint in the Dodger blue.

In case you were wondering, "Bulldog" spent the final ten games of his career with the Dodgers in 2000, posting a horrendous 13.14 ERA in the process.

Some things are better left unremembered. 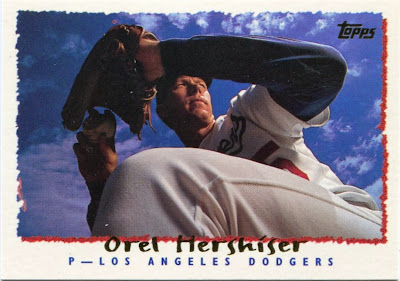 I'd much rather see Hershiser featured during his prime years.

While I make fun of the guy for the rather nerdy cards he received during his career, he sure had his fair share of downright legendary pieces as well.

I've wanted a copy of his '95 Topps issue for a long time now. 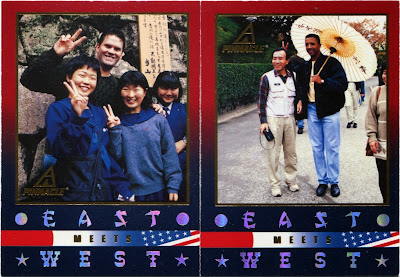 Ever since I picked up a few from my local flea market this summer, I've been on an unofficial quest to complete the 1998 New Pinnacle "East Meets West" subset.

The cards document a short U.S. vs. Japan exhibition series that was played in 1998. From the looks of it, our guys had a good deal of fun in the land of the rising sun.

And, yes, that's a young Pedro Martinez on the right, carrying one of those large Japanese umbrellas and giving his buddy the bunny ears.

It's just so Pedro. 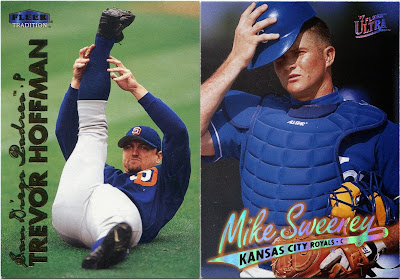 I couldn't resist picking up a few miscellaneous fun cards along the way.

One could probably caption that Trevor Hoffman in many different ways. I don't have time for such a thing right now.

Though I've always been an avid Mike Sweeney collector, I tend to give special treatment to cards from his early catching days. 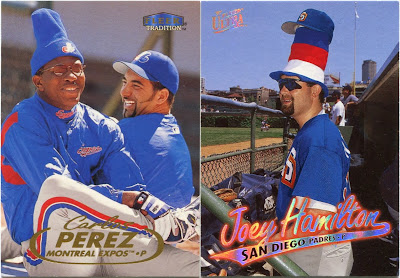 I'm always up for funny hats.

Honestly, I can't believe I didn't already have a copy of the Dr. Seuss-esque Joey Hamilton. 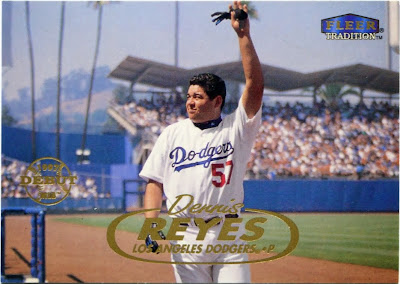 Here's a great card that made its way around the Dodger blogs a little while ago.

While I'm not sure such a thing is possible, I'd love to know when this particular shot was taken. And, perhaps more importantly, why.

Dennis Reyes isn't exactly the kind of guy I can see getting curtain calls. 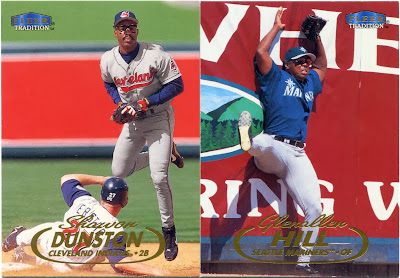 You may have noticed a few 1998 Fleer Tradition singles sprouting up throughout the course of this post.

That's no accident. Only now am I starting to realize just how interesting this set was in terms of photography.

Both of these could be classified under my "Short Term Stops" theme, although I picked them up more for the photos than anything else. 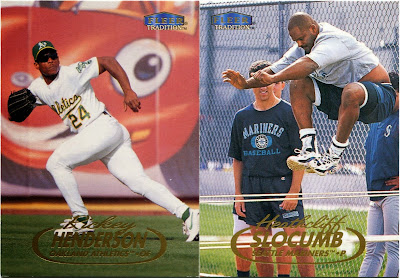 Giant, smiling cards in the background.

A former reliever jumping out of his shoes. 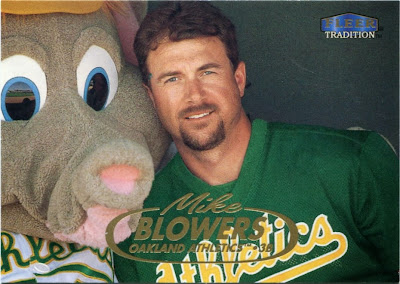 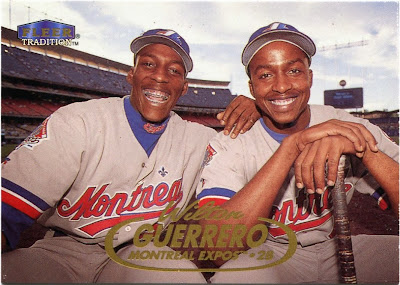 Brothers from the same team on one card.

None are exactly common sights in this hobby. And yet 1998 Fleer Tradition had all of that, and then some.

While I can't officially label this as a Vlad Guerrero card, it has to go down as one of the better cameos in hobby history.

And..are those braces I see on Vlad? 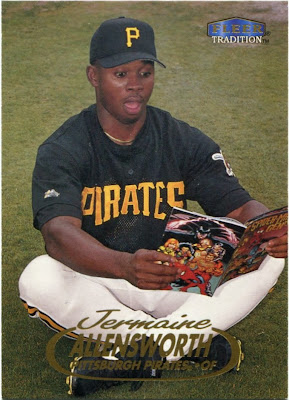 This, though, was probably the best card from my most recent Just Commons order.

I can't say I've seen another piece that features a comic book. Former Pirate Jermaine Allensworth appears to have reached a rather pivotal point in that particular Spider-Man story.

There's a reason I love discovering cards from the '90s so much.

If Mr. Allensworth is any hint, you just never know what you'll find next.

Thanks to Just Commons and their humungous inventory, I'm beginning to unearth more and more gems for my collection.

Still, these were just the beginning.
Posted by Nick at 7:03 PM

I crapped myself when I saw the White Pinnacle card. That is the epitome of perfection.

Comc is great for the pics. I really want to support them by buying something there but common cards are just too overpriced. I find it good for vintage buys though. Another decent place to see pics is http://tradingcarddb.com/
Its not as good, but at least I don't feel guilty for not buying anything.
-Corey

The Reyes photo was from his debut. He pitched a solid game and made some contributions at the plate as well. He reminded many Dodger fans of Fernando because of us appearance and Mexican heritage. Reyes even taught himself out to throw left handed to emulate his idol, Fernando.

A's mascot is not crepy Nick..it's cute!
Hershiser card is the opposite of those (rare) cards picturing the pitcher from an upper view. This make him look like a giant. Cool.