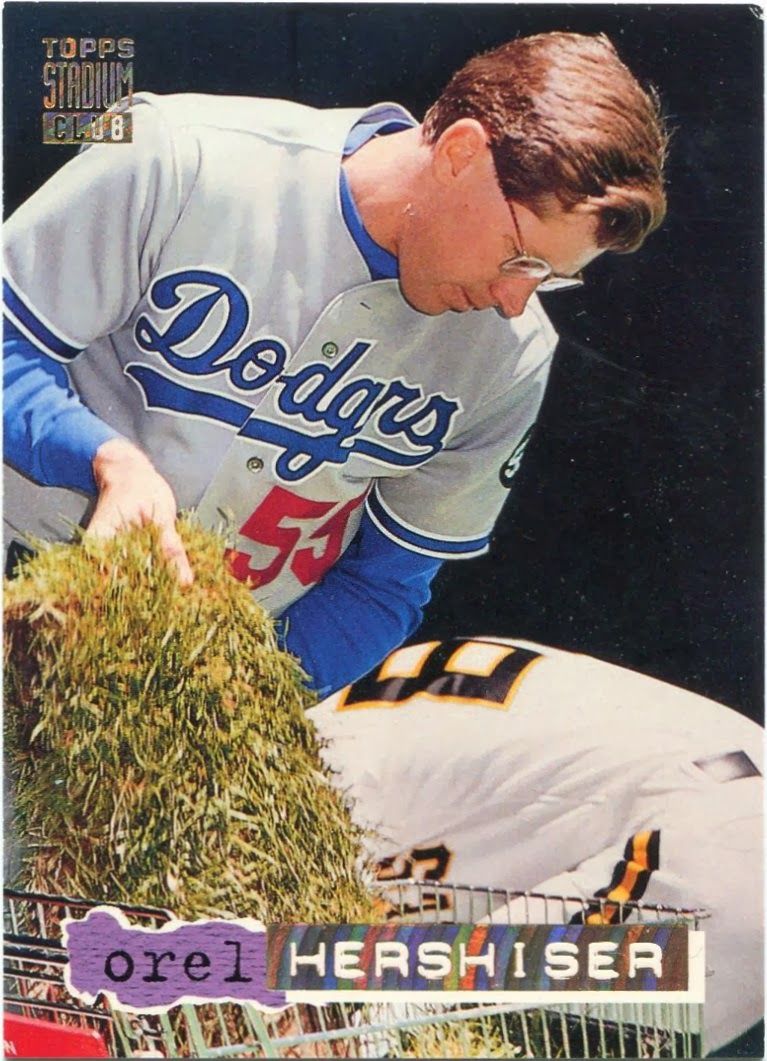 As I alluded to in a recent post, I was all set to give a presentation about my collection in one of my classes today.

However, some complications led to it being delayed until next week. That's a shame, because I was really looking forward to my little speech.

Even though lugging around one of my Cubs binders in my backpack was all for naught, I'm still in an intense baseball card mood today.

So, since I've once again built a bit of a backlog in trade posts, I figured tonight would be a good night to feature yet another great mailer that recently hit my doorstep.

This one comes from a repeat offender. You may remember that John of the great blog "Johnny's Trading Spot" recently sent me a flat-rate box of fun a little while ago.

Well, just a short time after that one arrived, John dropped yet another flat-rate box on me. Like the first batch, this one included stacks upon stacks of terrific cardboard.

John started things off with the card you see at the top of the post. As yet another quirky piece in the saga of Orel Hershiser, I'd been planning to add to my "Dime Box Dozen" list at some point in the future.

As I found out, this seemingly random shot actually has a bit of a backstory. During a rather harsh losing streak away from home, the Dodgers took a piece of Dodger Stadium sod on the road with them for good luck. That's what Hershiser is holding on his 1994 Stadium Club issue.

"Bulldog" certainly knows how to make an interesting baseball card, I'll tell you that. 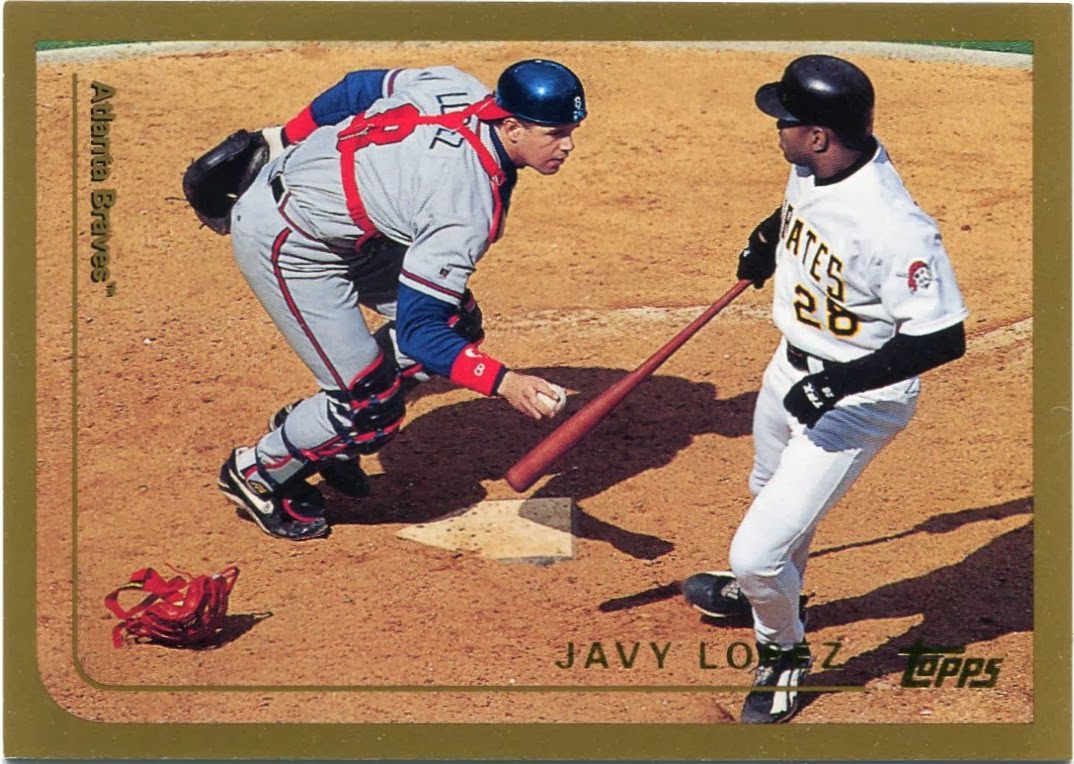 This one is certainly a jaw-dropper in that department. 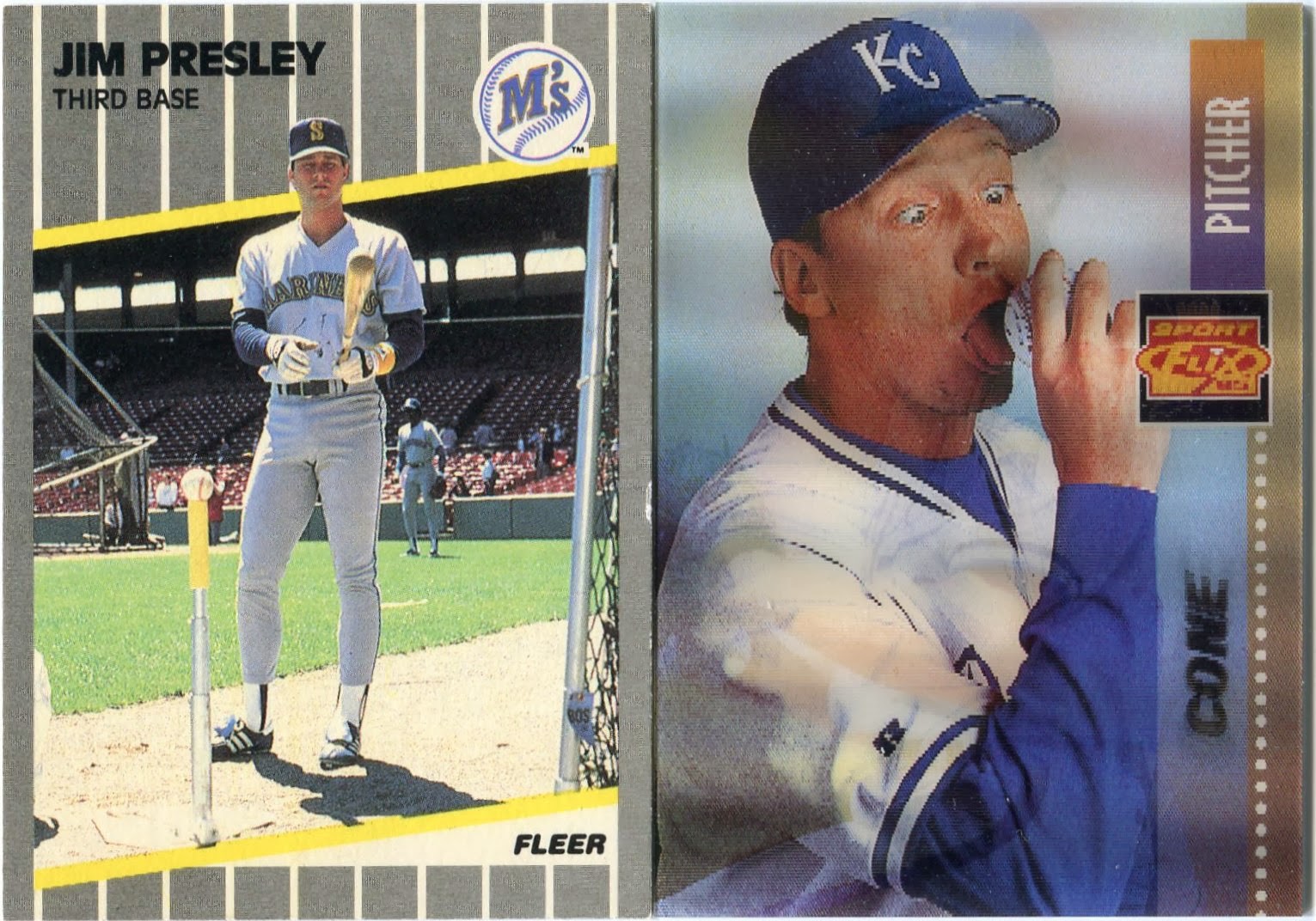 John managed to send over quite a few nice randoms.

Yes, I can't believe I'm saying this, but I did just use the word "nice" to describe something from 1989 Fleer. I can't help loving that nice tee shot (complete with a good old-fashioned "bat barrel") on the Presley. That said, it's still the exception to the rule when it comes to '89 Fleer.

I have a good relationship with my scanner. People often complain about not being able to properly show their 3-D cards, but I got that "munchies" shot of Mr. Cone on the very first try. 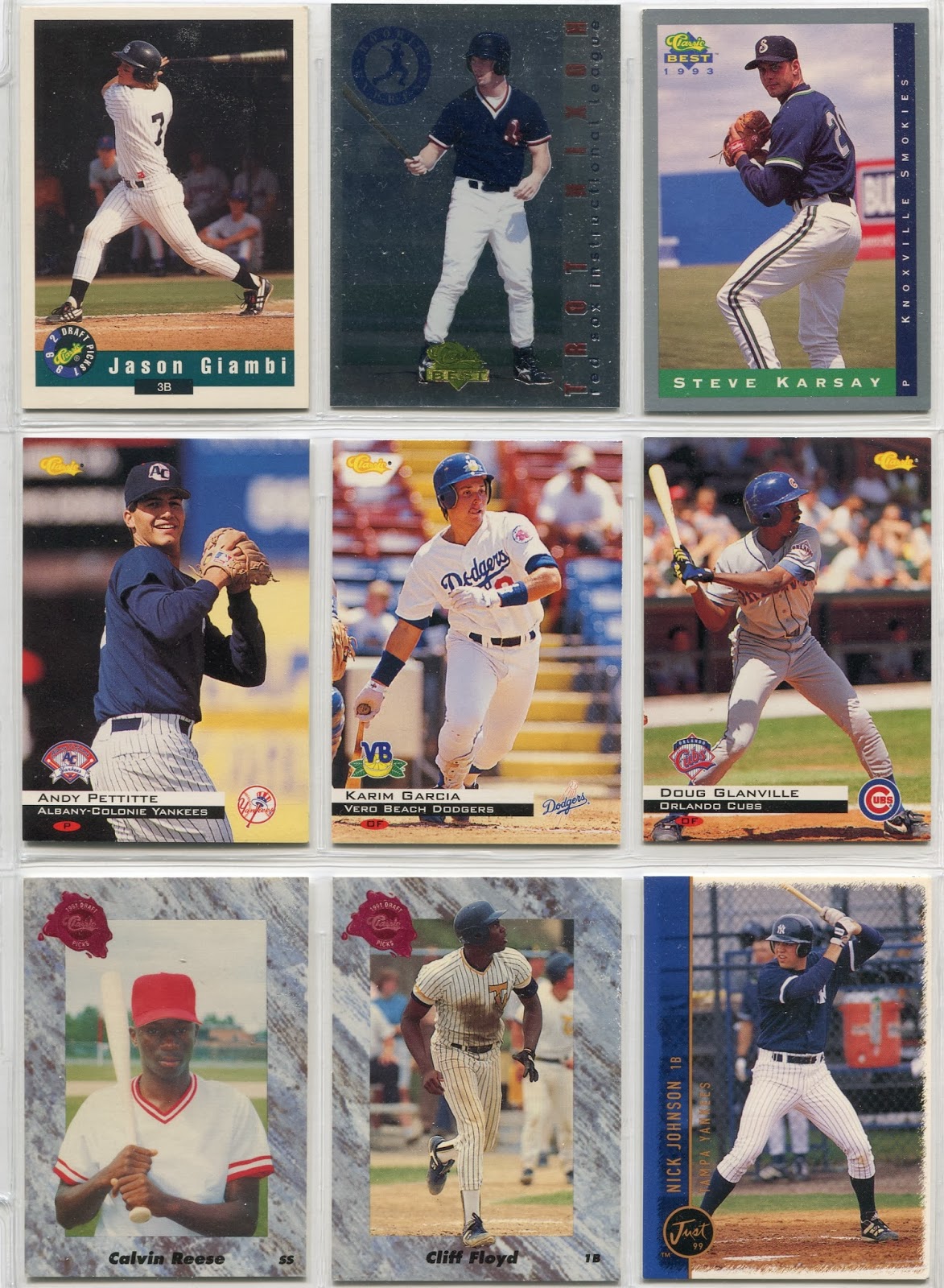 Amidst all the randomness, John threw in a couple huge stacks of nothing but minor league cards.

I think I've mentioned my appreciation for these things in the past. I wouldn't say I specifically look to track down new minor league issues, but it's always a pleasure to dig through a stack of them.

While some of the names John sent along have been long forgotten, there were a few future stars in the mix.

I doubt anyone knew who the heck Jason Giambi or Andy Pettitte were when these sets were released. 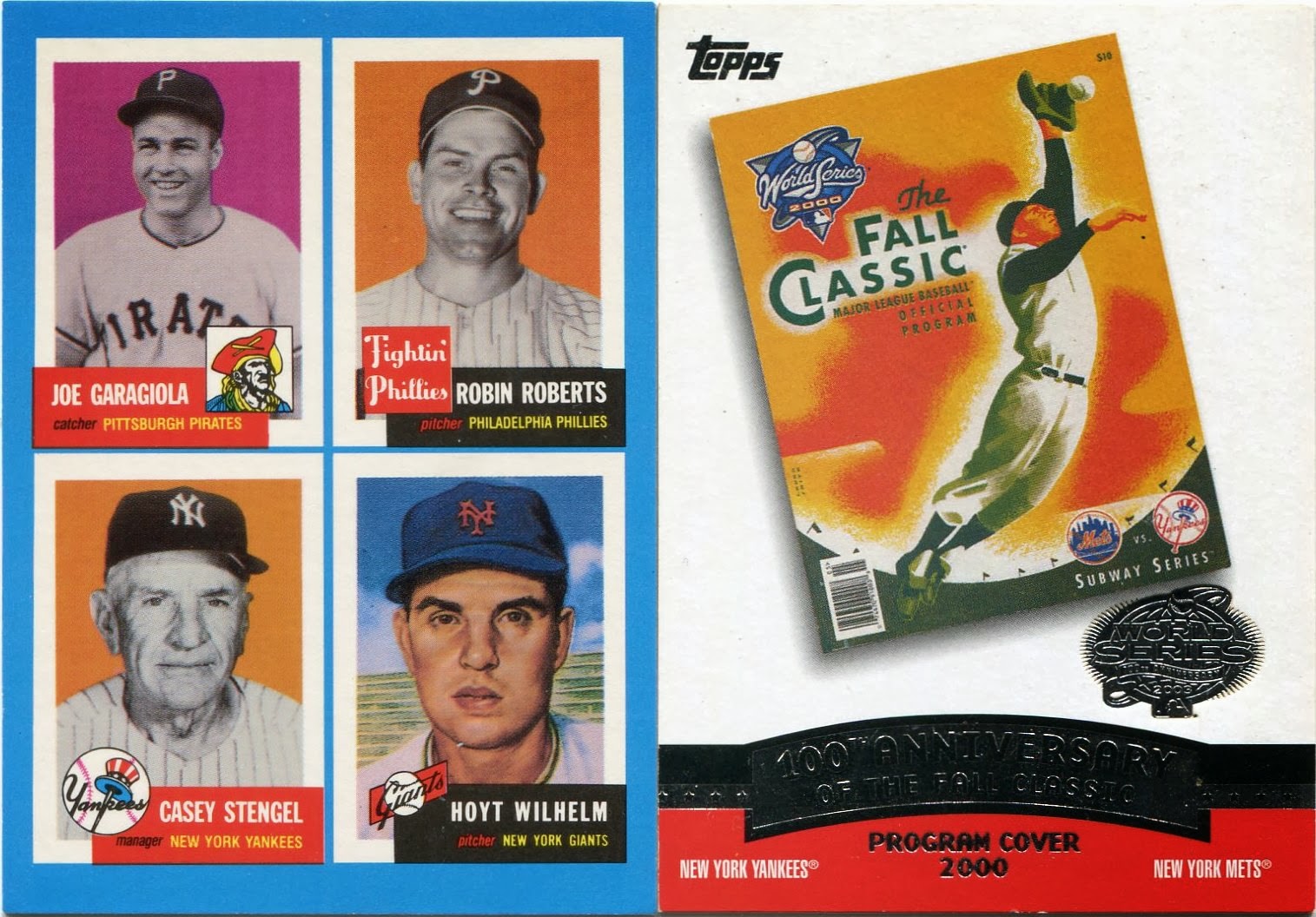 Quite a few people have sent over those early '90s Bazooka "4-in-1" singles.

However, John is the first person to find one that features the Hoyt-ster. Between Garagiola (a future broadcaster), Roberts, and Stengel, he's in good company there.

One day, I'll make more of an effort to complete that "100 Years of the Fall Classic" insert series.

For now, I'm living off the ones fellow traders dig up from their collections. 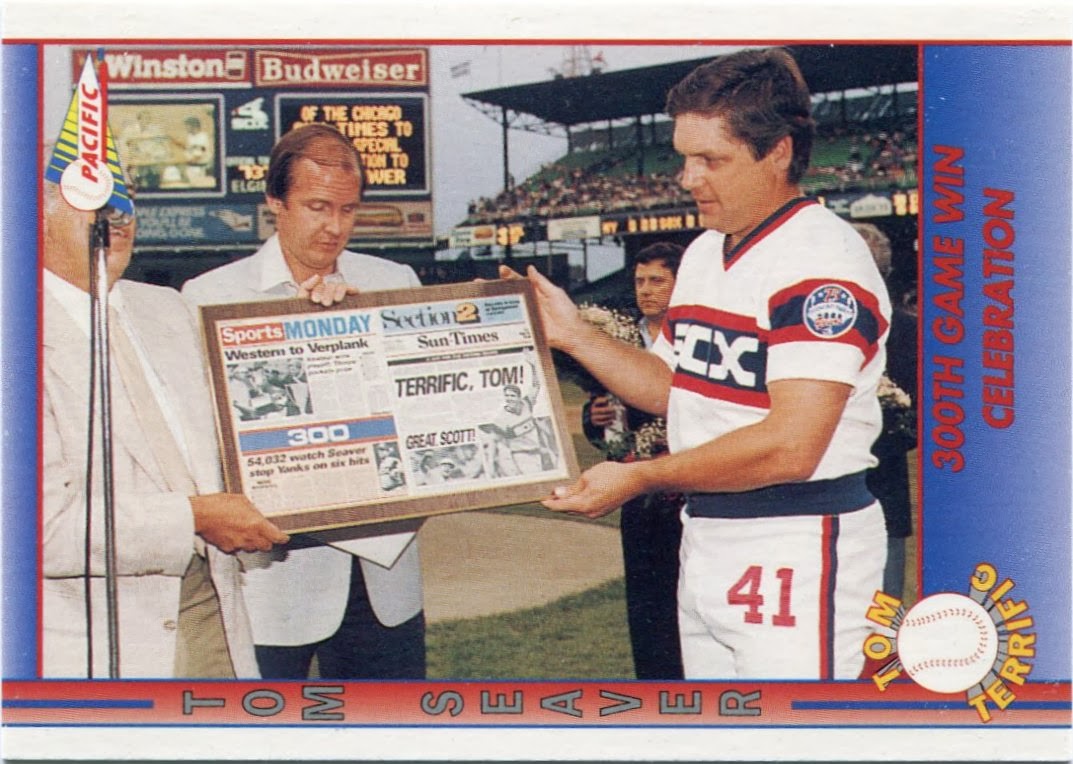 This flat-rate box also featured a healthy stack of singles from Pacific's "Tom Terrific" set in 1992.

All 110 cards in the checklist feature, you guessed it...Tom Seaver. Now, on the surface, that might sound like one heckuva boring set. I used to think so, anyways.

Over time, though, I've found that these one-player checklists really aren't all that bad. (I'm planning to do a future post on the matter.)

Sure, some of them might be "same old, same old" after a while, but a select few can really be something special.

Take the card you see above, for instance. That's a neat shot of Mr. Seaver's 300th Win celebration at old Comiskey Park, complete with a framed newspaper cover from the day's Sun-Times. Of the 100-plus cards I own of "Tom Terrific", not one shows him at the plate. Before these came along, that is.

For the record, Seaver was a .154 career hitter, though he did launch 12 career dingers. So maybe the "Batting Star" label is a bit misleading.

Nevertheless, shots like these aren't something you'll see in your everyday baseball card set.

That's why I'm an unlikely advocate for these one-player checklists. 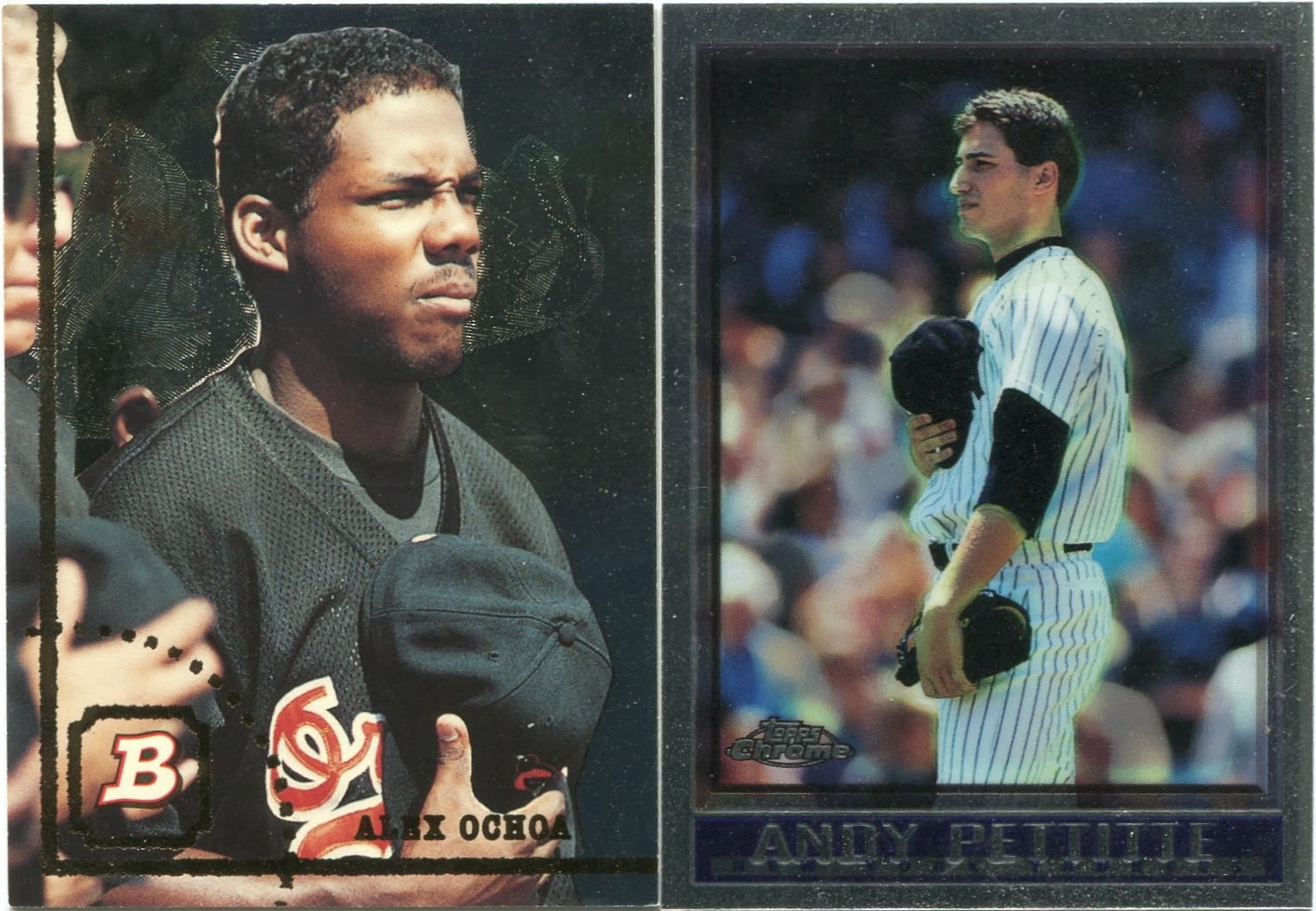 Speaking of "pitchers at the plate", John definitely knows his way around my mini-collections.

He already proved that with the first flat-rate box he sent me. The ones he included in this latest batch were kind of like extra credit.

John was amongst the first to find hits to my brand new "anthemic" mini-collection. If the name doesn't speak for itself, this latest theme is devoted to players honoring America's National Anthem.

I'm looking forward to digging for these in future dime boxes. 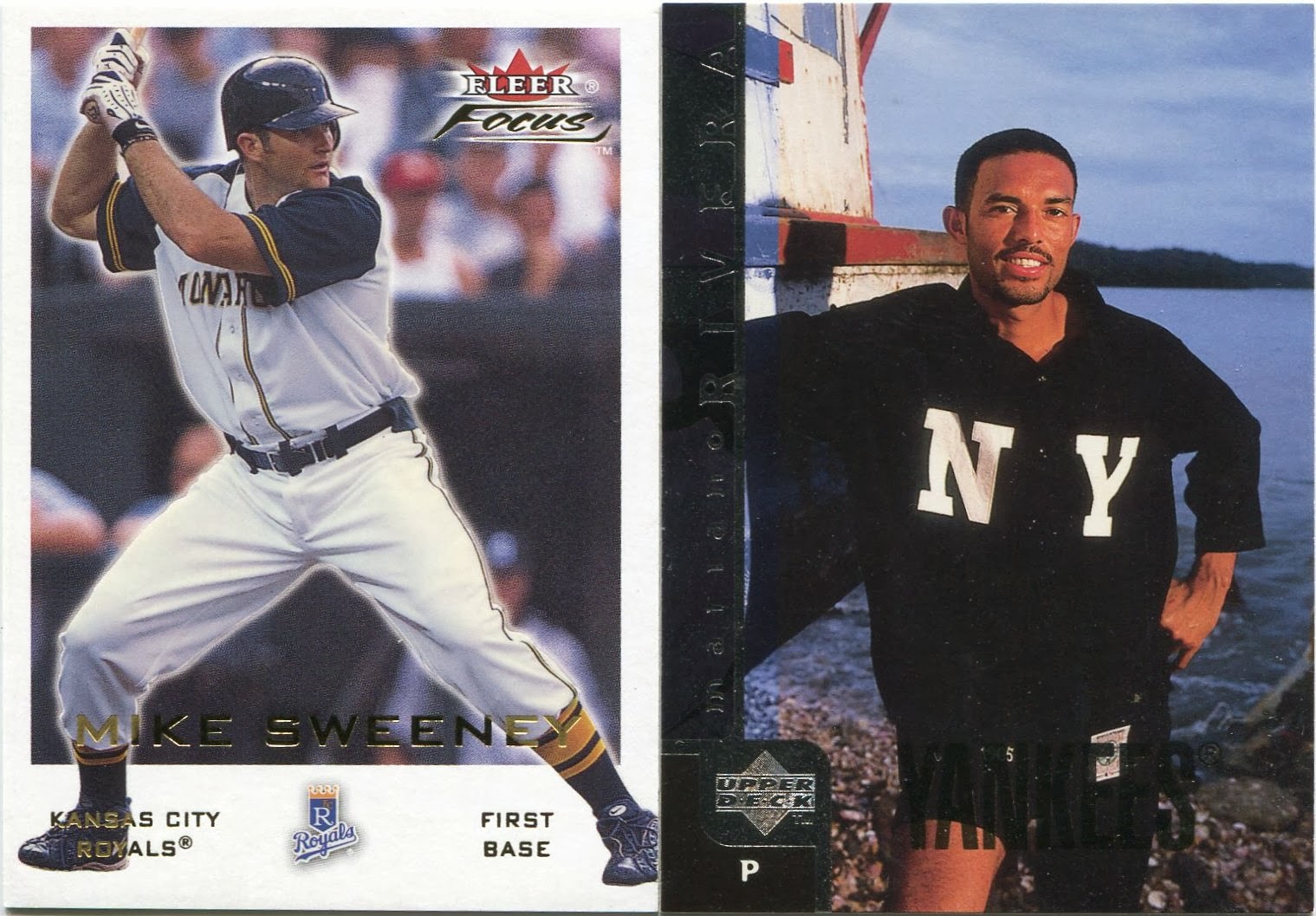 Why Mariano Rivera is wearing a 1905 New York Highlanders jersey in his underpants is anyone's guess. As is the beach setting in the background. (Though I'm guessing that the photo may have been taken in his native Panama.)

I think most of us can agree on one thing, though.

It's a pretty doggone awesome piece of cardboard no matter what. 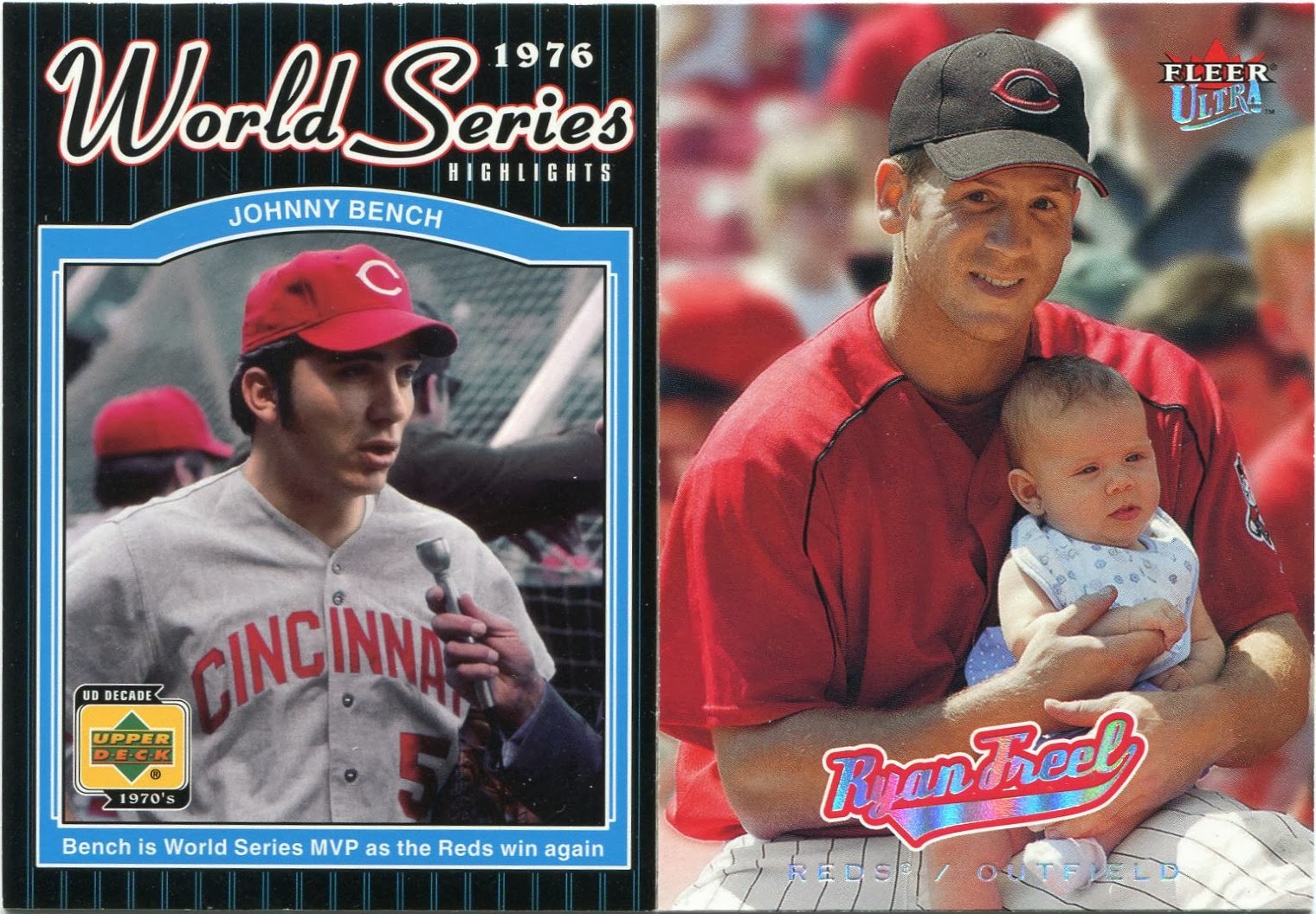 Given the recent tragedy involving Ryan Freel, his 2004 Ultra issue is quite chilling. Still, I'm always on the hunt for new adds to my "cards with kids" theme. Plus, it gives us a glimpse into a time when Ryan Freel's life was pretty good. And that's a special thing.

Though I've loved the set for virtually my whole collecting lifespan, I'm still tracking down cards I need from the 2001 UD Decade checklist. I'd never seen that spectacular "interview" shot of Mr. Bench before this flat-rate box arrived.

It leaves me wondering what else I've missed from this awesome set over the years. 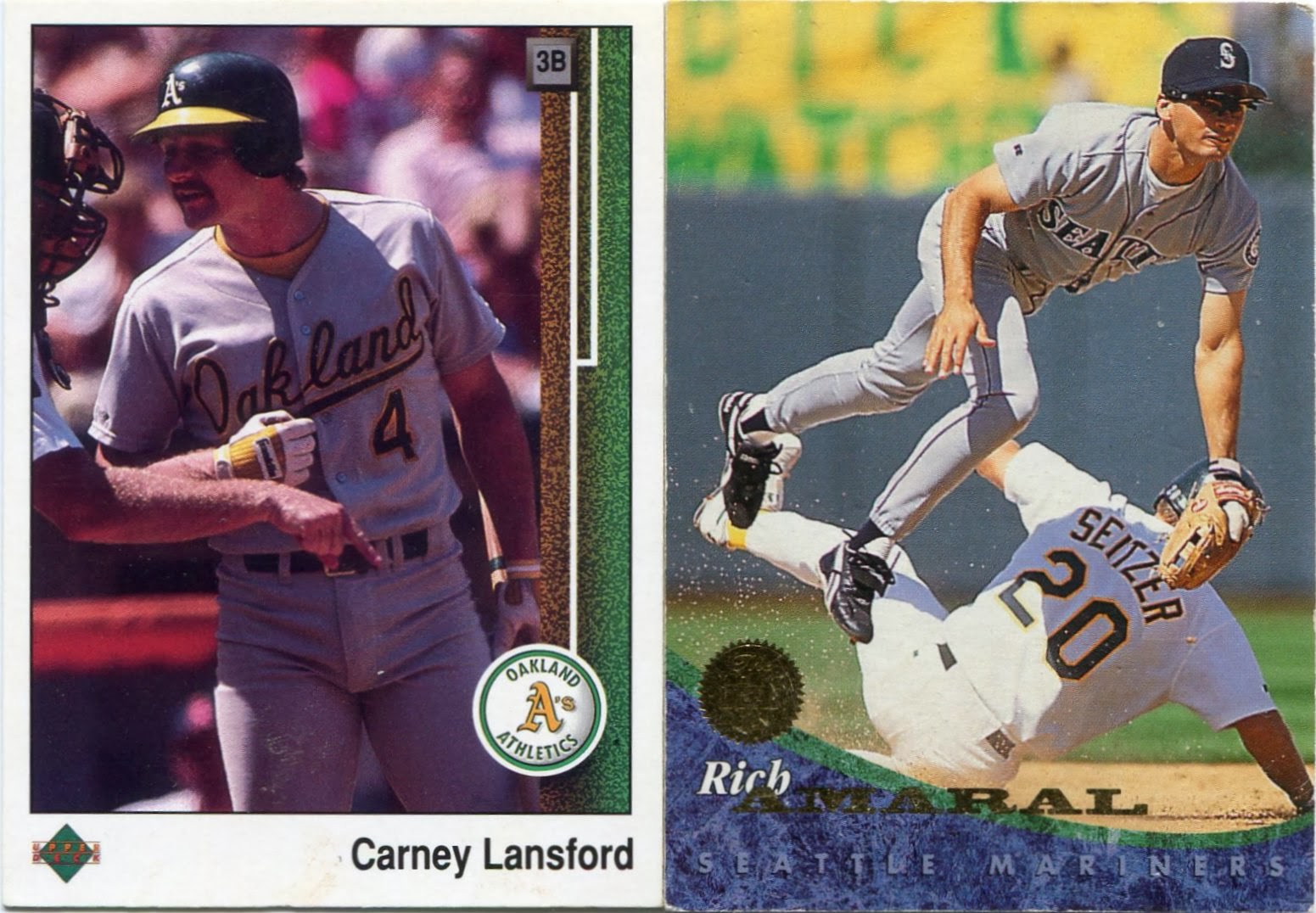 As you can see, John found a rare new piece for my "argument" theme. That pitch was right over the plate, Mr. Lansford.

I can't say I've ever heard of Rich Amaral, but that's one mean "double dip" shot right there. 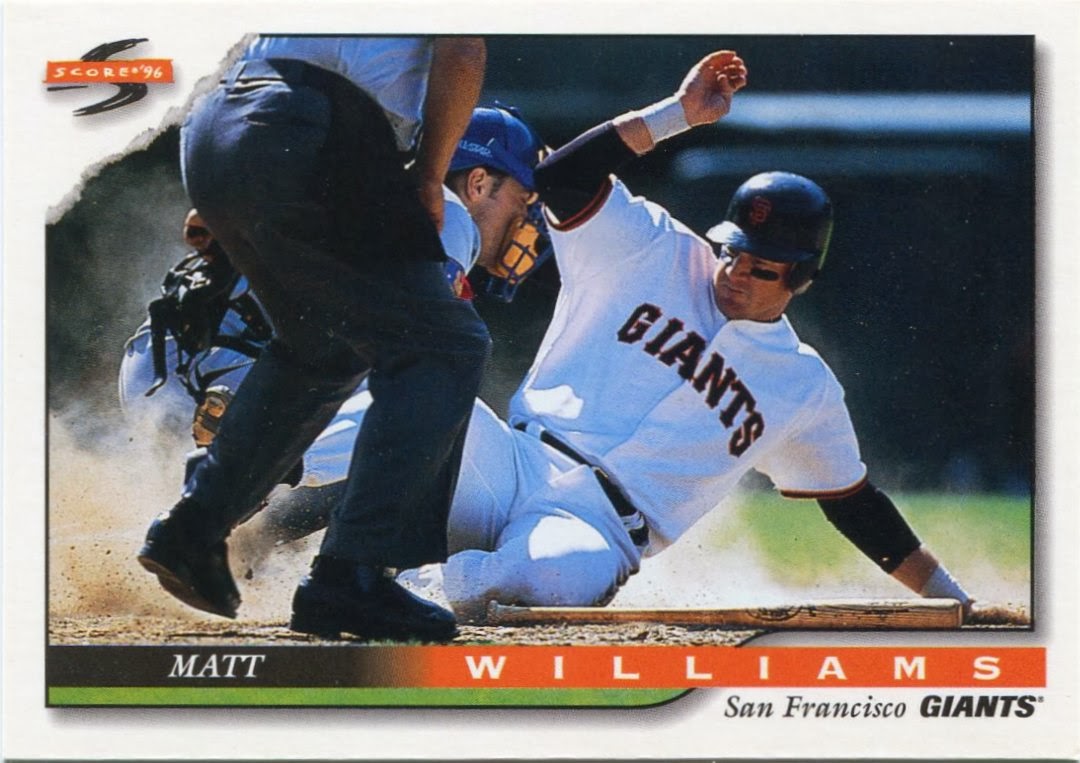 It's yet another chapter in Score's underrated run of great sets in the mid '90s. 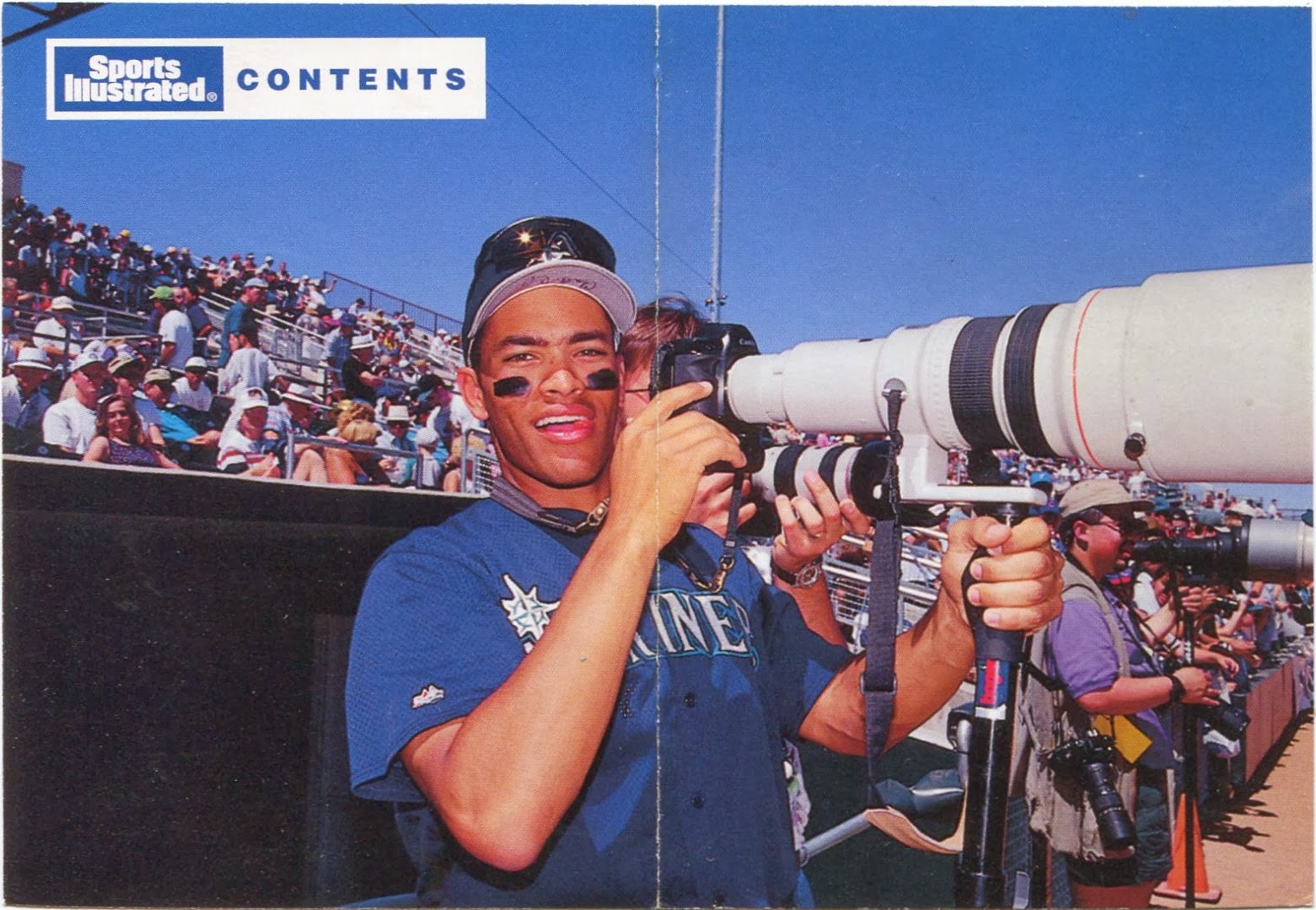 John also managed to dig up this fold-out beauty, a rather unorthodox add to my "behind the camera" theme.

On top of that, Jose Cruz Jr. wasn't a Seattle Mariner for very long. He spent just 49 games with the franchise in 1997 (his rookie year) before being traded to the Blue Jays midseason.

I'm especially fond of these things because most show the player in a candid place of happiness.

If all this great cardboard is any indication, John earned quite a bit of extra credit with his second flat-rate box of fun.

With his generosity, though, I doubt he needed it.
Posted by Nick at 6:43 PM