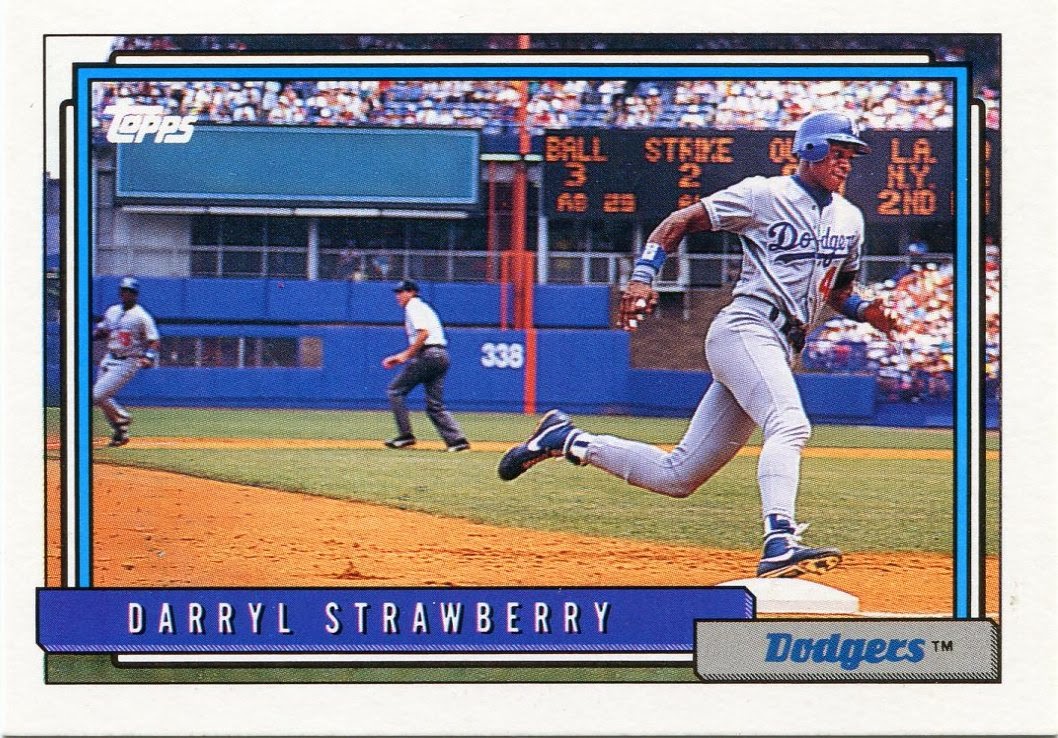 It's amazing how much action can be captured in a single frame.

I'm not trying to give the impression that I don't enjoy posed shots, because I do. Many of my favorite cards feature posed photos.

A lot of the time, though, action shots have more of a story behind them. And, if the stars align, you might just be able to track that frame down to a specific moment in time.

It's a phenomenon known as "dating", and I've been trying it more and more here on the blog recently.

If 1991 Topps marked the return of horizontal cardboard, then '92 Topps announced that they were here to stay. The Flagship checklist from my birth year featured some of the more jaw-dropping landscape photos the hobby has ever seen.

An iconic and foreshadowing shot of Mr. Ripken may be the best of the best in that regard. Among the set's other horizontal greats is this terrific action-packed shot of former Dodger Darryl Strawberry.

For a while in the early '90s, these "in-motion" shots seemed to be all the rage. The third base angle on many provided a different view of the game that the hobby hadn't seen before and hasn't since.

Having the famous Shea Stadium scoreboard in this shot makes dating this particular piece a fairly simple task. Topps snapped this photo during a Dodgers-Mets contest on July 21st, 1991, and I'm about 99 percent sure that Dwight Gooden's spectacular 1992 Stadium Club frame was taken during the same game.

Since the "2nd inning" designation is clearly visible on the scoreboard, dating this card didn't take a lot of archive digging on my part. With no outs in the top of the second, Strawberry scored from second base on a single to left by Lenny Harris to put the first run of the game on the board.

Harris wore #29 during his brief stint with the Dodgers, and you can clearly see the number 29 next to the "AB" space on the scoreboard.

It all checks out.

Though posed shots have their merits, not many can provide this kind of history.

The sheer action is what makes Mr. Strawberry here such a memorable piece of the overproduction era.
Posted by Nick at 3:30 PM

Oooh, another amazin' choice! Could this be Straw's best card ever?? Well, that's a debate for another time. But, clearly this is a photo that woulda been worthy of Stadium Club inclusion.