Death to the dozen 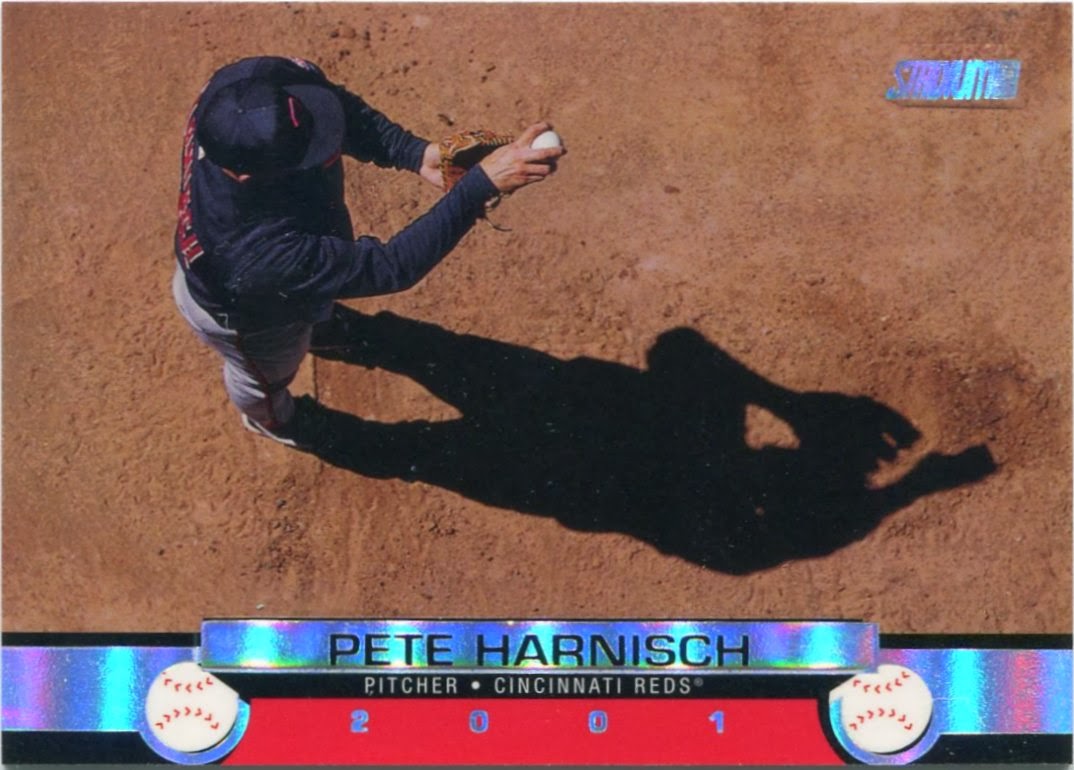 I'm not the type of person who writes a lot of things down.

Planners, appointment books, and things of that nature have never helped me. For the most part, I'm able keep and organize all my homework assignments and other various plans in my head. The ol' noodle has worked perfectly for me over the years.

Blogging has forced me to change my ways a bit. Though I used to just wing it during the early days of this blog, I now jot down future post ideas whenever they come to me. When a semi-interesting concept strikes, I don't want to forget.

Another thing I've been doing recently is writing down the names of people who have sent me letters and/or packages as of late. I do this in order to know who I need to hit with "return fire" at some point. It's my own personal hit list, if you will.

One of the more consistent assassins during my tenure here in the blogosphere has been Douglas, author of the fantastic blog "Sportscards From The Dollar Store". He recently dropped a couple PWEs on me, sparing no punches in the process.

Luckily for me, Douglas had a spare copy of this spectacular 2001 Stadium Club Pete Harnisch to donate towards my frankenset.

I think this is one of those cards that simply speaks for itself. In one of his emails to me, Douglas asked if I needed this one.

Mr. Murray is one of ten colorized short-prints in the 2013 Panini Cooperstown checklist. I hadn't planned on chasing the SPs with too much vigor, but I'm certainly not going to pass up such an opportunity.

You gave it a good home, Douglas. 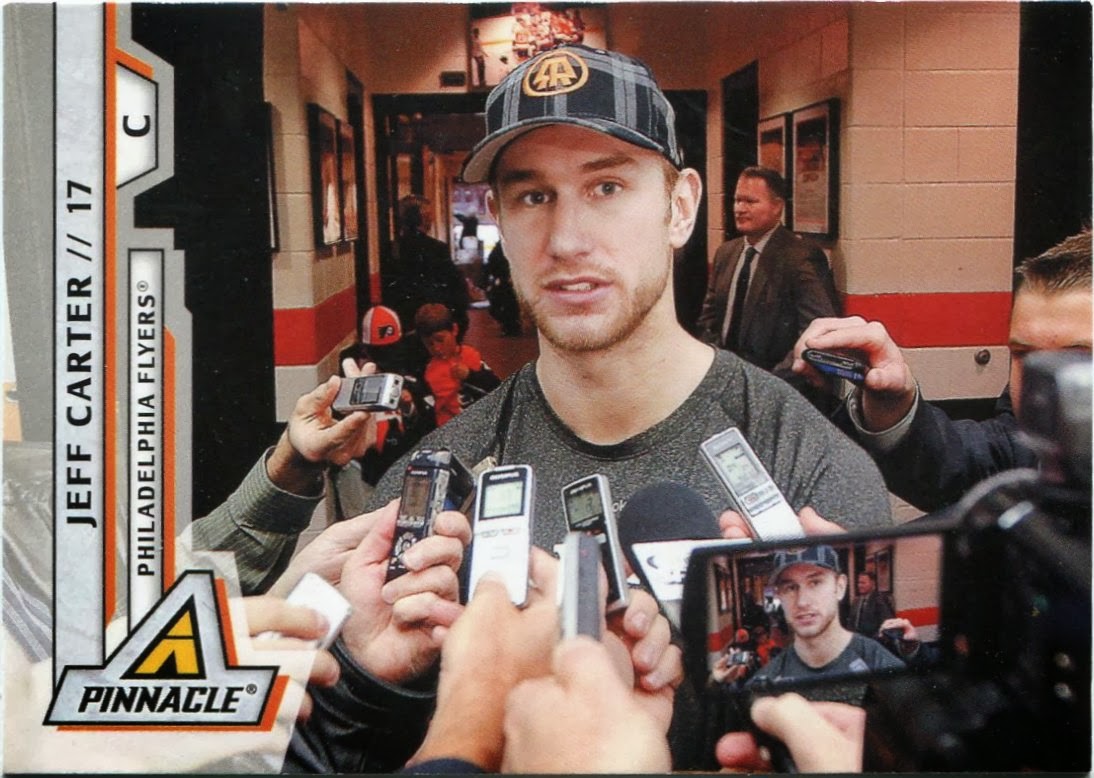 Like virtually all of his past cardboard gifts, Douglas mixed some hockey takes on a few of my mini-collections into these PWEs.

This Jeff Carter is one of the most modernized "interview" shots you'll see. I love all the different digital devices, especially the video camera in the foreground that gives the collector an odd sense of deja vu.

In fact, I count only one real, actual microphone in that shot. 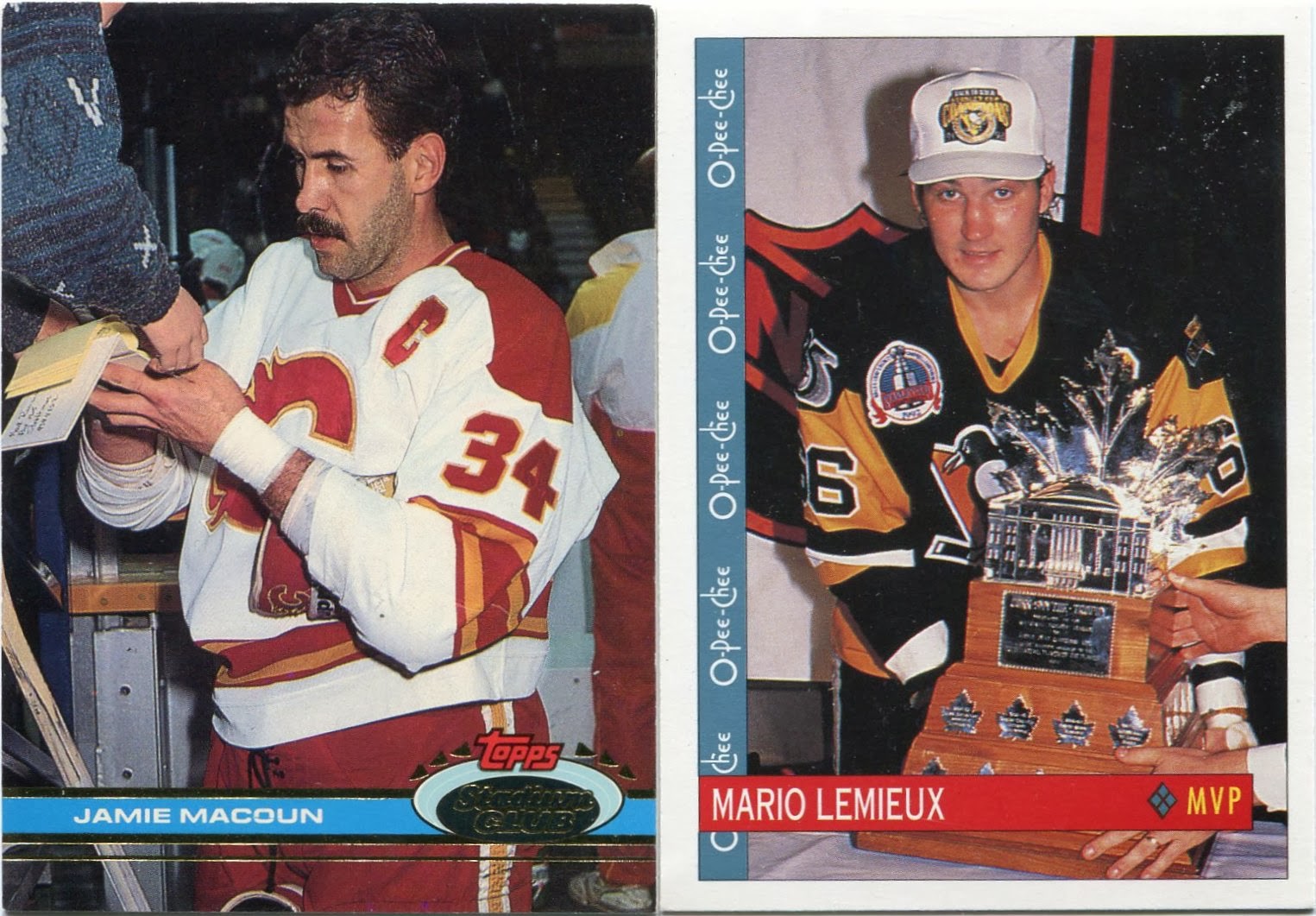 It's too bad I didn't have mini-collections during my brief days of hockey card collecting. 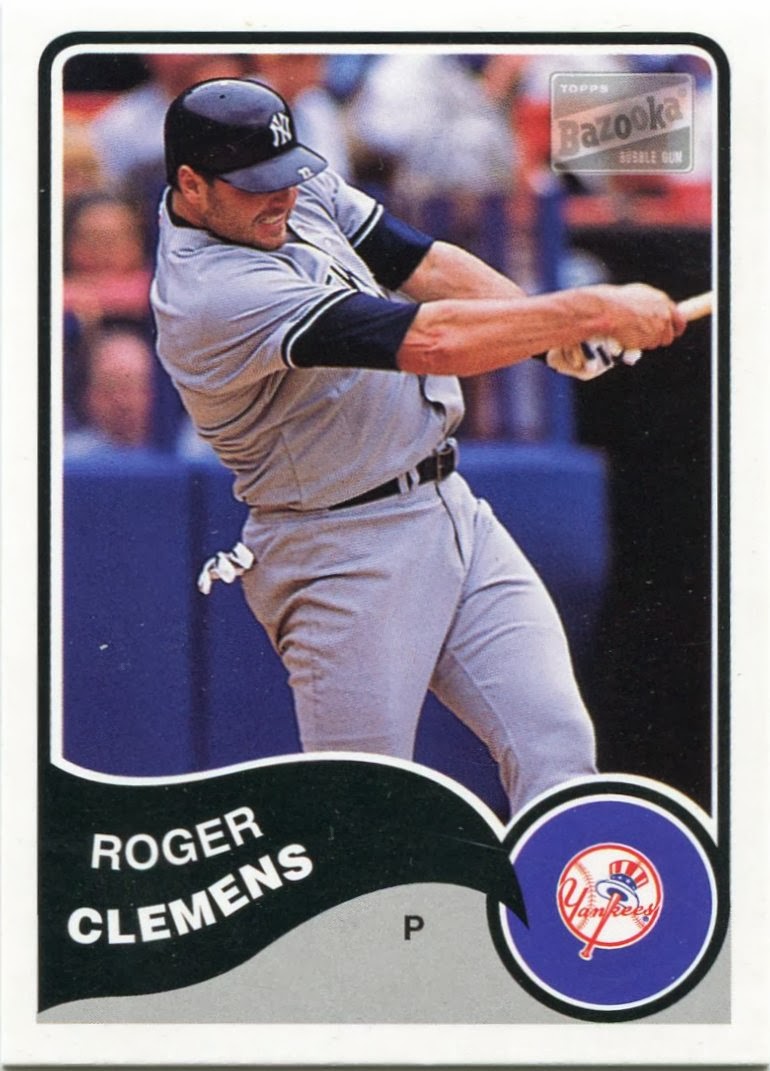 Douglas managed to slip in a few baseball mini-collection hits as well.

In fact, he got me to do something that I try to avoid on this blog by showing a Roger Clemens card.

To put it lightly, I'm not a fan of "Rocket". That said, I welcome this one into my collection with open arms. It is, after all, a rare example of an American League pitcher at the plate.

Even if it is Roger Clemens. 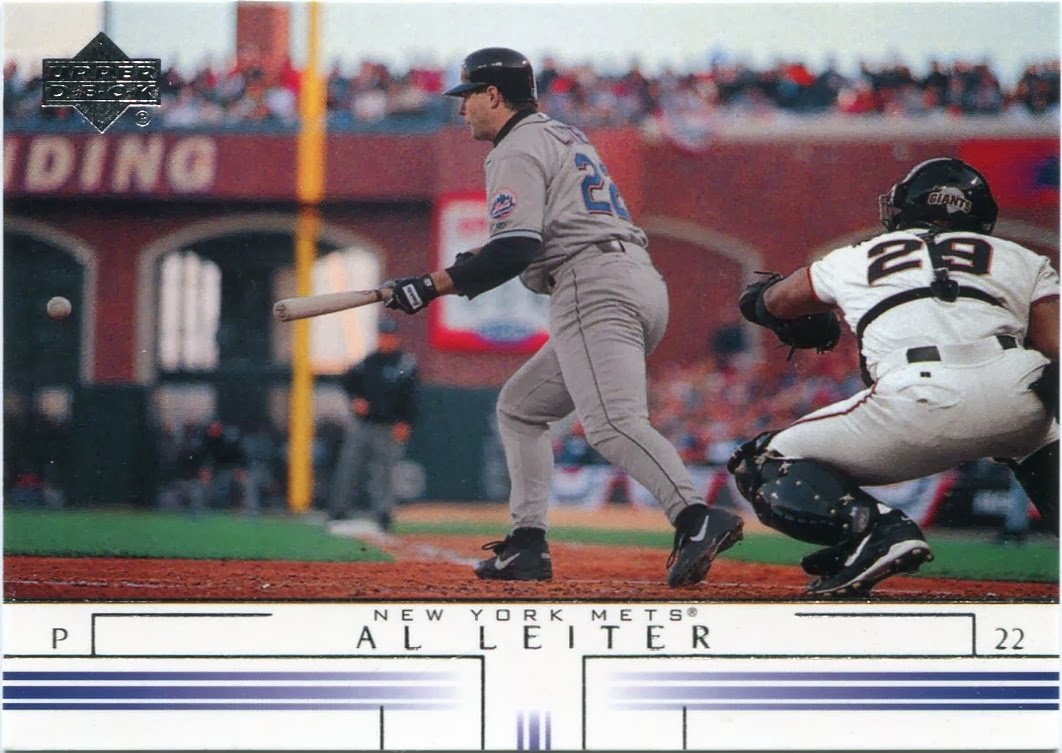 The advent of my "Dime Box Dozen" list has forced me to write a few things down recently.

Anytime I see or hear about a cool card that I don't have, I jot it down for future consideration. I have quite a long list of future "Dime Box Dozen" candidates as we speak.

Thanks to the efforts of many of my fellow bloggers (and a few impulse buys), I've had to consult that list quite a bit lately. I'd have to go back and check, but I think Douglas (a.k.a. "The Assassin") has hit more "Dime Box Dozen" needs than anyone else.

Exhibit A is the Al Leiter you see above. Upper Deck managed to take something as mundane as a sacrifice bunt and make it beautiful. That's a big reason why I made it a "Dime Box Dozen" need.

It's one of the better "pitcher at the plate" specimens I've come across in some time. 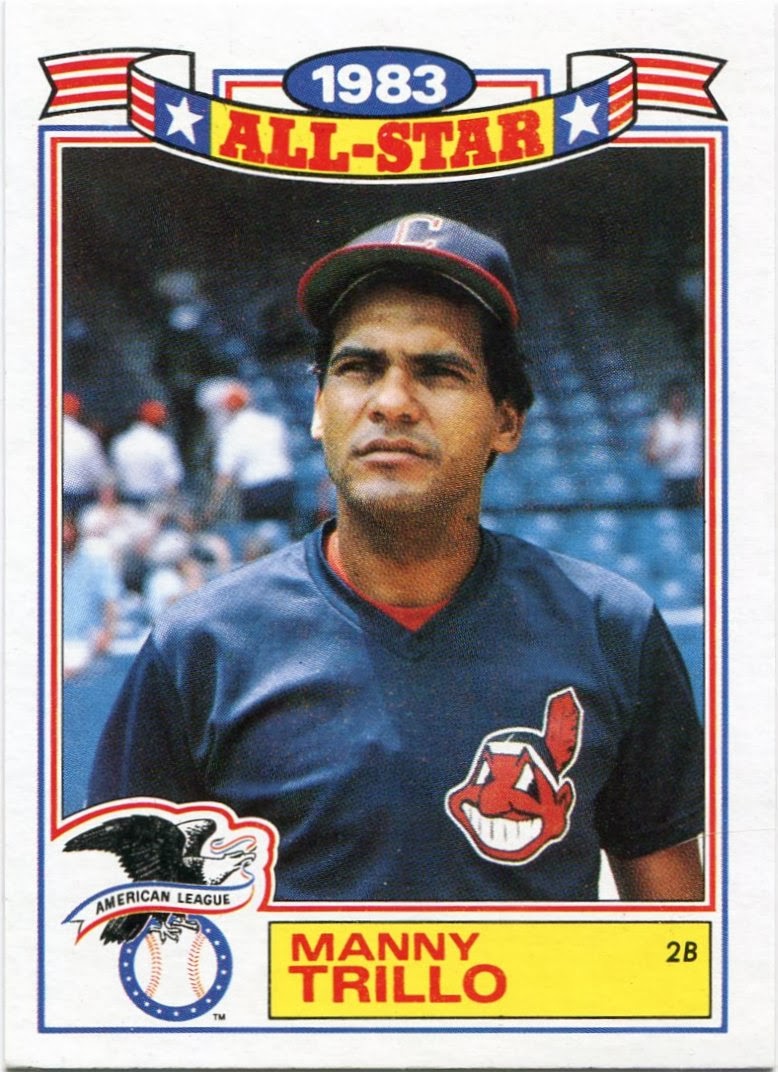 When I initially put this one on my sidebar, I didn't have any cards of the former infielder as an Indian. I now have two, as Trillo's 1983 Topps Traded issue recently found its way into my collection as well.

Douglas didn't stop there, though. 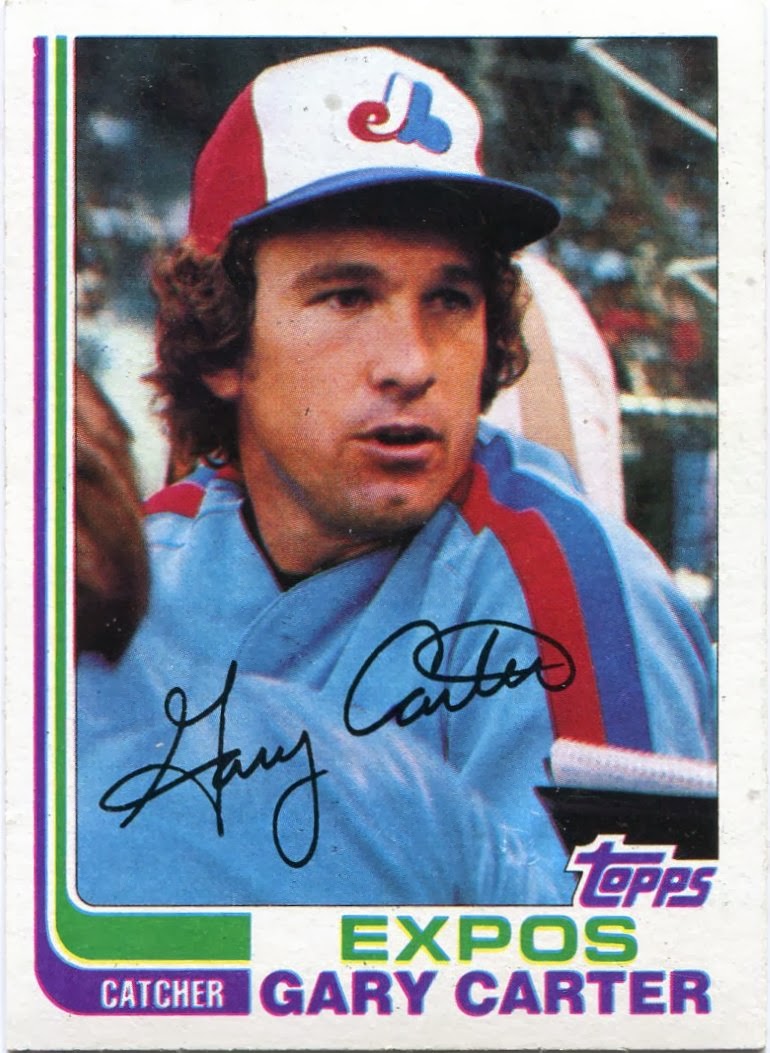 His third and final "Dime Box Dozen" hit was this '82 Topps Gary Carter.

It lasted all of about a day on my sidebar before Douglas knocked it out.

While doing a little research, I noticed that I had every solo Topps card of "The Kid". Every one, that is, except his 1982 Topps issue. So, when Douglas hit this need, he completed my Gary Carter "Topps set".

Though I've mentioned it on this blog before, a "Topps set" is getting one of every Flagship card a player had issued during his career.

Multi-player cards, like Carter's rookie (which I don't yet own) are optional. As are "in-action" issues or any other subsets. Traded cards, however, are needed for my official "Topps sets". And I have all of Carter's.

One of these days, I'm going to go through my binders and see just how many "Topps sets" I've completed thus far.

Hey, that's not a bad idea for a future post.

I should probably write that one down.
Posted by Nick at 1:30 PM

I cannot believe I am about to say this:

That is a beautiful 2002 Upper Deck Leiter.

I almost had another PWE to send your way, but the 1987 Lopes disappeared from your dozen rather quickly.

That certainly is a SUPER SWEET SHADOW SHOT!