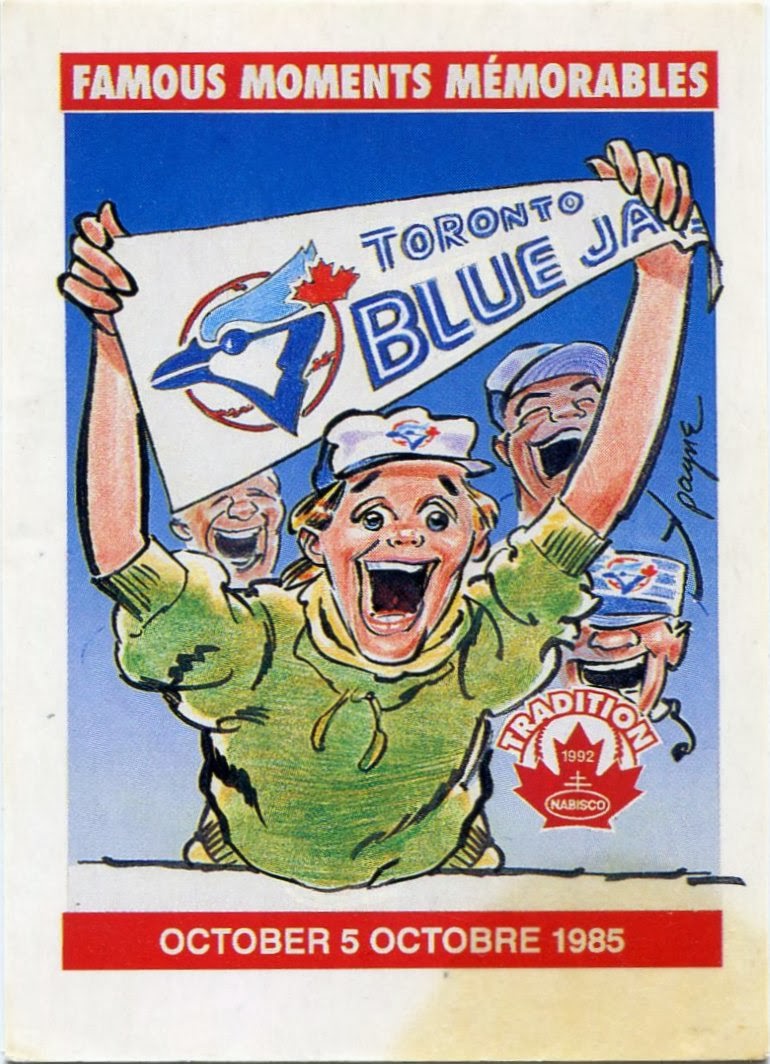 Thanks to about a -20 wind chill right now, I'm off school yet again today.

With that kind of weather, I guess it's only appropriate that we'll be taking a look at the All-Blue Jays "Short Term Stops" roster today, the only current franchise from north of the border.

While I'm a fan of the Jays, I still think baseball needs another team in Canada. Whether it be another expansion squad or simply moving a team to the Great White North (preferably the latter), it's something I'd like to see happen in the next ten or fifteen years.

For now, though, I will say that I have a vested interest in the Blue Jays. That said, they're a prime example of why you can't just get big-name players and expect to compete.

Their huge trade with the Marlins last offseason (along with the R.A. Dickey acquisition) was good for a 74-88 record, which was last in the A.L. East.

I'm looking forward to seeing where they go in 2014.

Along with the nightmarish "Highlights" card you see above (which came from Nabisco cereal boxes in Canada), my Blue Jays binder has quite a few good "Short Term Stops" candidates.

We start off with one of the more unfamiliar stints in baseball history. 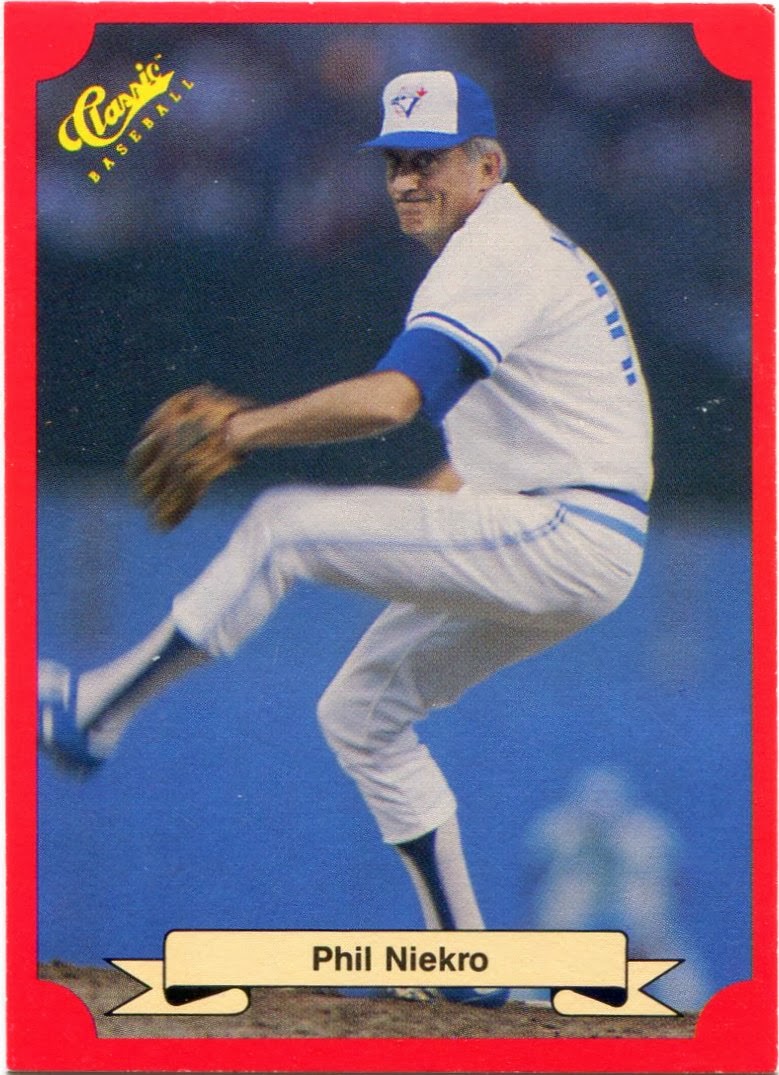 If I were to make a revised "Top 100" list, this one would definitely be on it.

I have yet to see another card that features Phil Niekro as a Blue Jay, and I'm about 99 percent certain that this is the only one in existence.

In a stint sandwiched between 22 contests with the Indians and a short one-start farewell with the Braves, "Knucksie" spent all of three games with the 1987 Blue Jays. He went 0-2 with an 8.25 ERA before being released by Toronto.

The short three-game stop didn't give card companies much of an opportunity to snap a shot of Niekro with the Blue Jays.

That makes the efforts of the Classic brand so much more impressive. 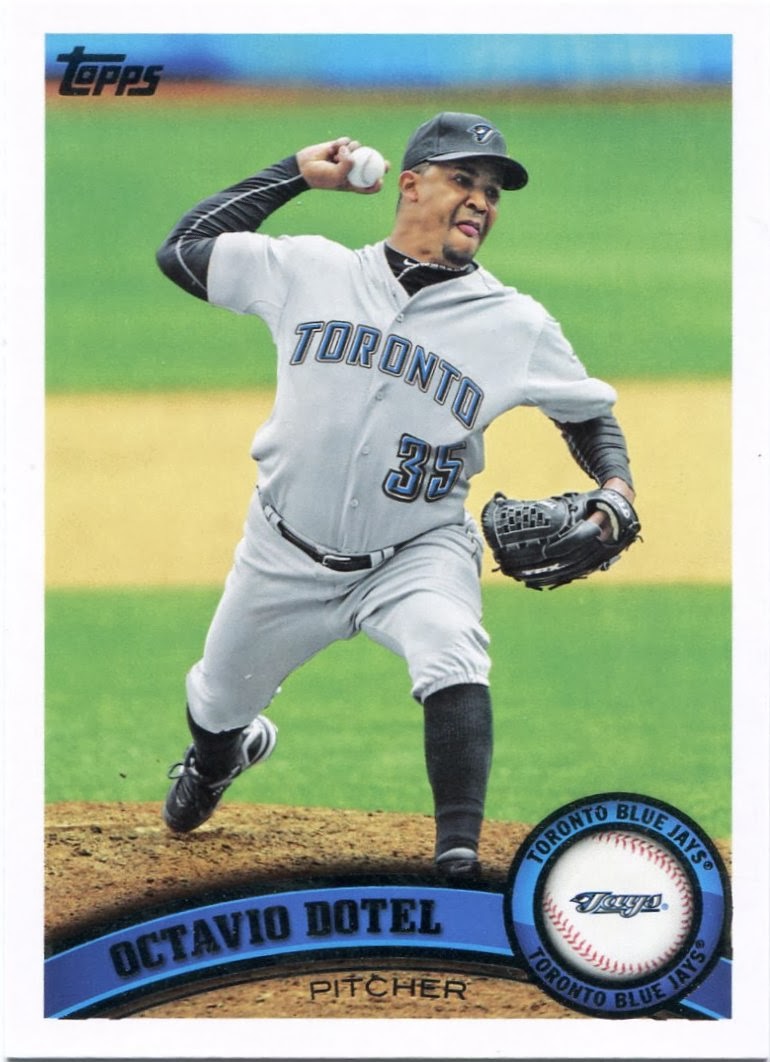 We move on to the master of "Short Term Stops", Octavio Dotel.

At times, it seems like he's pitched for every team in the bigs. That's only a slight exaggeration. Dotel has suited up for thirteen franchises during his fifteen-year career, the most of any player in baseball history. (He's still intent on pitching in 2014, from what I hear.)

Toronto was the eleventh of those thirteen stops, as he spent the first part of 2011 north of the border. Dotel posted a 3.68 ERA in 36 games out of the bullpen with the Blue Jays.

But that's not what made his 2011 season so memorable.

Dotel was dealt to the Cardinals at the trade deadline that year, becoming an important arm out of the bullpen for their stretch run. St. Louis, as you might know, went on to win the Fall Classic in 2011.

It's still the only World Series ring of Dotel's long career. 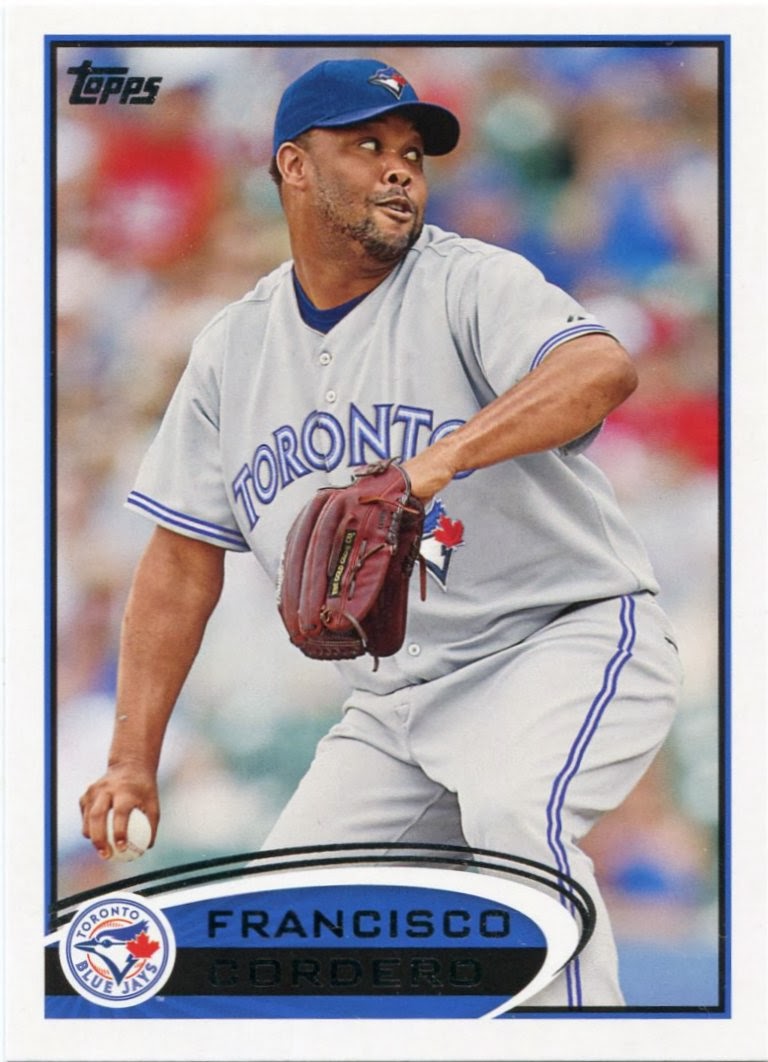 I'm sure Francisco Cordero wishes he retired in 2011.

After a stellar 37-save season with the Reds, he split 2012 with the Blue Jays and Astros. He posted a bloated 5.77 ERA during his 41 games with Toronto, earning just two saves in the process.

Though he just missed making the Astros' roster, "Coco" earns the final pitching spot on this "Short Term Stops" squad. 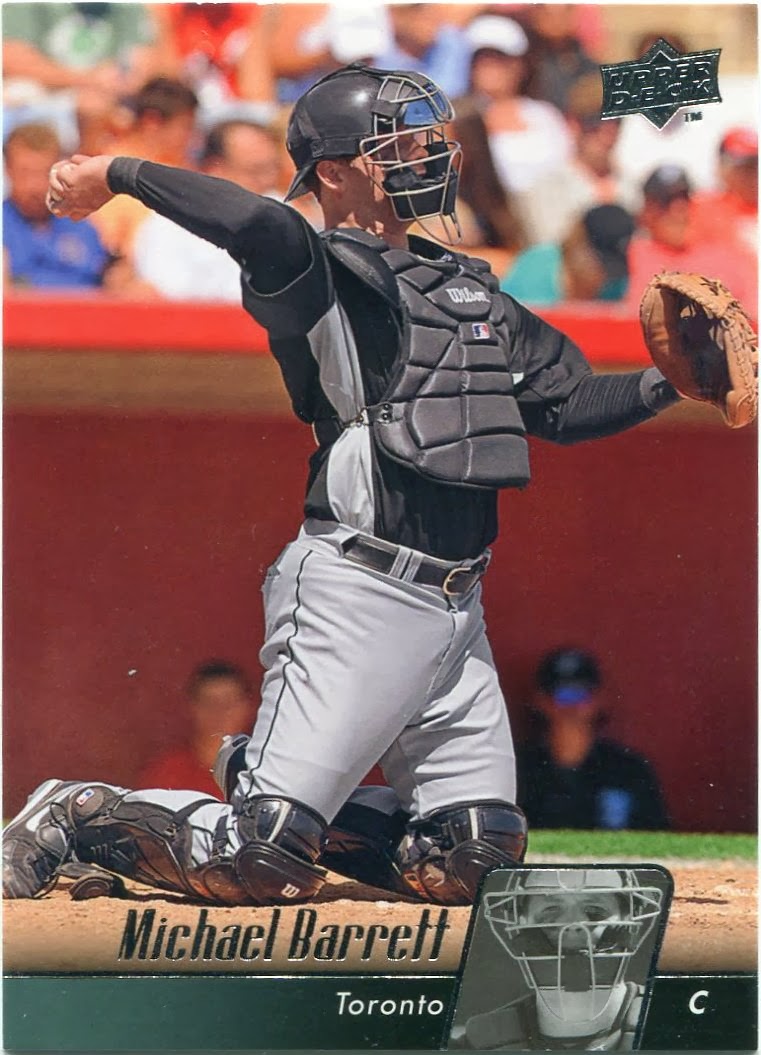 Michael Barrett is a pretty well-known name amongst Cubs fans.

Sadly, most don't remember him for the solid seasons he posted in the mid-2000's. Nope, he's best known as the guy who wasn't afraid to throw a punch.

He decked A.J. Pierzynski in 2005, triggering a wild crosstown brawl. About a year after that, he was involved in an infamous dugout altercation with Carlos Zambrano.

Because the Cubs weren't ready to give up on "Big Z" at that point, Barrett was basically run out of Chicago, being dealt to the Padres not long afterward. That was the last I heard of him for a while.

I don't think I even knew Barrett was still in the bigs when I pulled this card from a pack of 2010 Upper Deck. He was, if just barely. He spent seven unspectacular games with the 2009 Blue Jays. 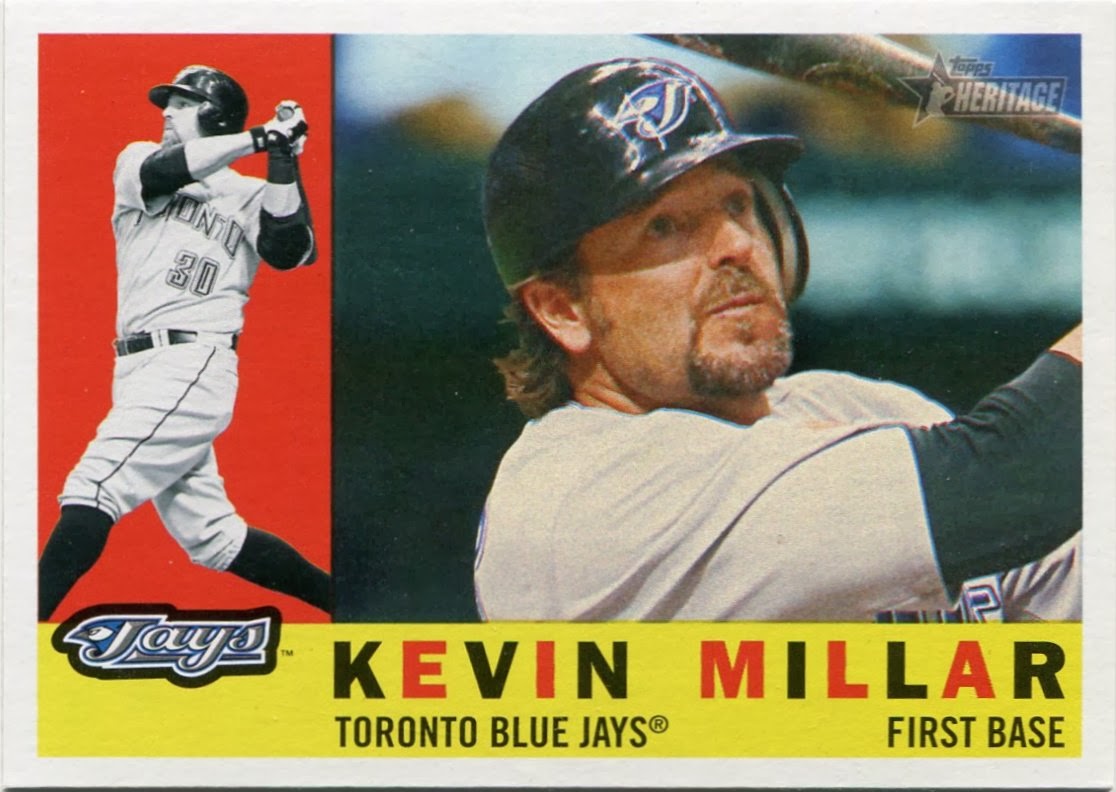 I don't have a whole lot of "must-watch" TV shows nowadays.

One of the few, however, is MLB Network's Intentional Talk. It's a fun little talk show hosted by Chris Rose and former Red Sox "idiot" Kevin Millar.

Because of how much I enjoy the show, I've done quite a bit of research on Mr. Millar. Here's a few fun facts for the day.

1) He was undrafted out of Lamar College before signing with the Marlins.

2) He was one of the players who crossed picket lines during the 1994 strike, which meant that he was never a part of the Player's Union during his career.

3) The Marlins were just about ready to sell him to Japan after the 2002 season until the Red Sox swooped in and acquired him. Had Boston not saved the day, he would've never taken that famous walk against Mariano Rivera in Game 4 of the 2004 ALCS.

After his 78-game stint in Toronto, the Cubs signed him to a minor-league deal. He was cut by the Cubbies during Spring Training, however, and retired.

I'd say Mr. Millar has had a pretty nice post-baseball career, though. 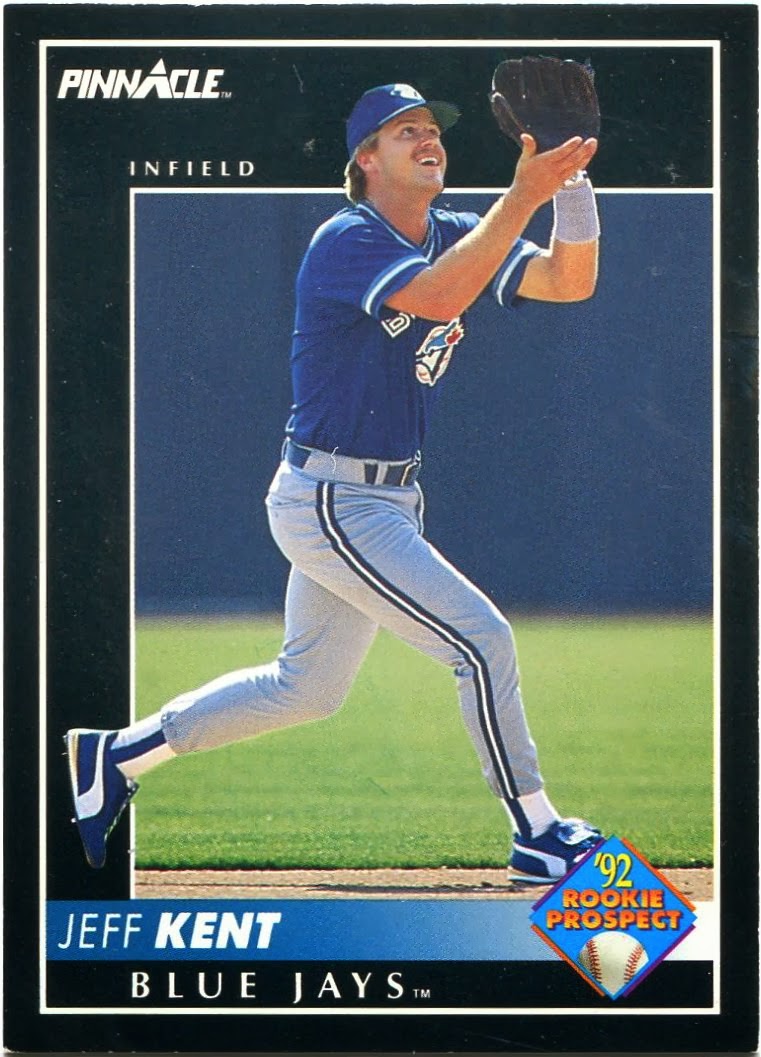 Like a lot of other people, I'm not a Jeff Kent fan.

I've tried to avoid showing cards of his on this blog, but I'd be lying if I said he wasn't deserving of a spot on this roster.

In a rare "half-year" rookie stint, Kent was traded to the Mets after just 65 games with the Blue Jays. (The swap brought David Cone to Toronto.)

Statistically speaking, he probably does have a resume worthy of the Hall of Fame. His 377 career homers are more than any second baseman in history.

Because of his tumultuous personality, though, I'm not so sure Jeff Kent will ever make it to Cooperstown.

He did, however, make it onto this "Short Term Stops" squad.

That's enough for me.

As usual, be on the lookout for Part 2 this evening.
Posted by Nick at 2:15 PM

I actually do have an idea for getting another team up north, but probably not in the place you expect. I am currently working on a post about this very subject that should be ready in a couple of weeks.

Sorry for the shameless teasing plug, but I gotta be me.

Poor Bob Brenly. I thought he'd at least get an honourable mention in the catcher spot. Although when your only card is a 1989 Bowman, there might be other reasons he didn't make the list.

Also, Dave Stieb, who had a short run with the team after his first retirement during the '98 season. He has no cards from the era, although those stats do show up on his Fan Favorites releases.

That Knucksie is a gem. Somehow he makes the Jays uniform looks like it was made for a senior citizen to wear.