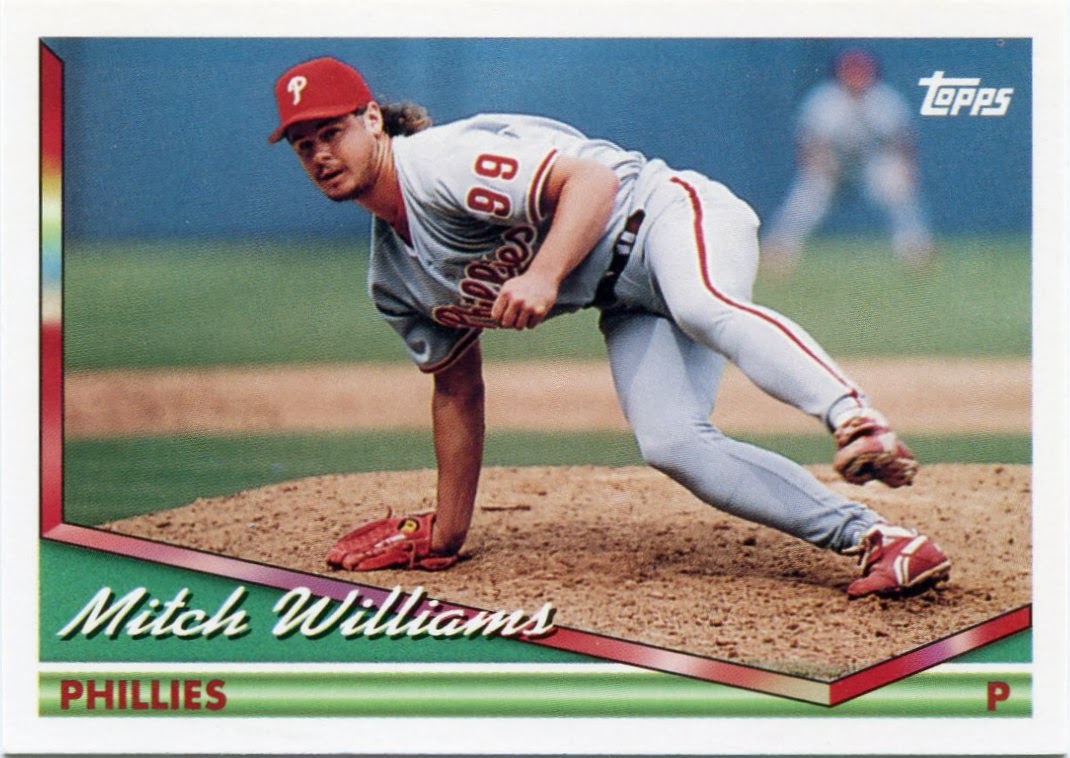 I think today's game could use a guy like Mitch Williams.

Between the hair, the #99, and the crazy delivery, I'm not sure we'll ever see another character like the "Wild Thing".

Since I was in my early days of life at the time, I can't speak for fans who were around then. However, I'd imagine that Williams was quite a polarizing figure. Much like Brian Wilson and his beard nowadays, you probably either loved him or hated him.

I'll go on the record right now and say that I'm a Mitch Williams fan. I can't say I remember seeing him play, but there has to be a certain excitement of watching a guy who will either walk a hitter on four pitches or strike him out on three.

Plus, I'm a sucker for unorthodox windups, and "Wild Thing" certainly had that. It's the reason I'm inducting his awesome 1994 Topps issue into the "Gems of Junk Wax" annals.

It's amazing that he was able to throw at all, considering that it looked like he was one misstep away from falling flat on his face after every pitch.

Through the mullet and wacky antics, though, it's apparent that Williams really does love baseball. I may not remember seeing him pitch, but I do get to see him on the MLB Network nearly every day.

The guy appreciates the game more than most people I know.

Me, I try my best to appreciate every era of cardboard. Even the so-called "junk wax".

That's going to do it for today's all-horizontal "Gems of Junk Wax Day" here on the blog. I hope you had as much fun as I did.

Tune in for another celebration soon.
Posted by Nick at 6:53 PM

I am a bit amazed I am unfamiliar with that card. It is from my collecting missing years, but I still should have seen it somewhere along the line.

Williams was hmmmm... A thrill to watch. He did a decent job, but boy did he make you nervous.

He has made a surprising comeback as an ex-athlete in Philadelphia. 20 years ago, nobody thought that could happen.

I'm a fan, mainly because of how he handled the Carter homer, both at the time and since. I'm jealous of his gig at MLB Network, though. He fills his time by talking half as fast, and taking the first half of his time to repeat what the last person said. Then he gets to go nap in his own office/man-cave on site. Where do I apply?