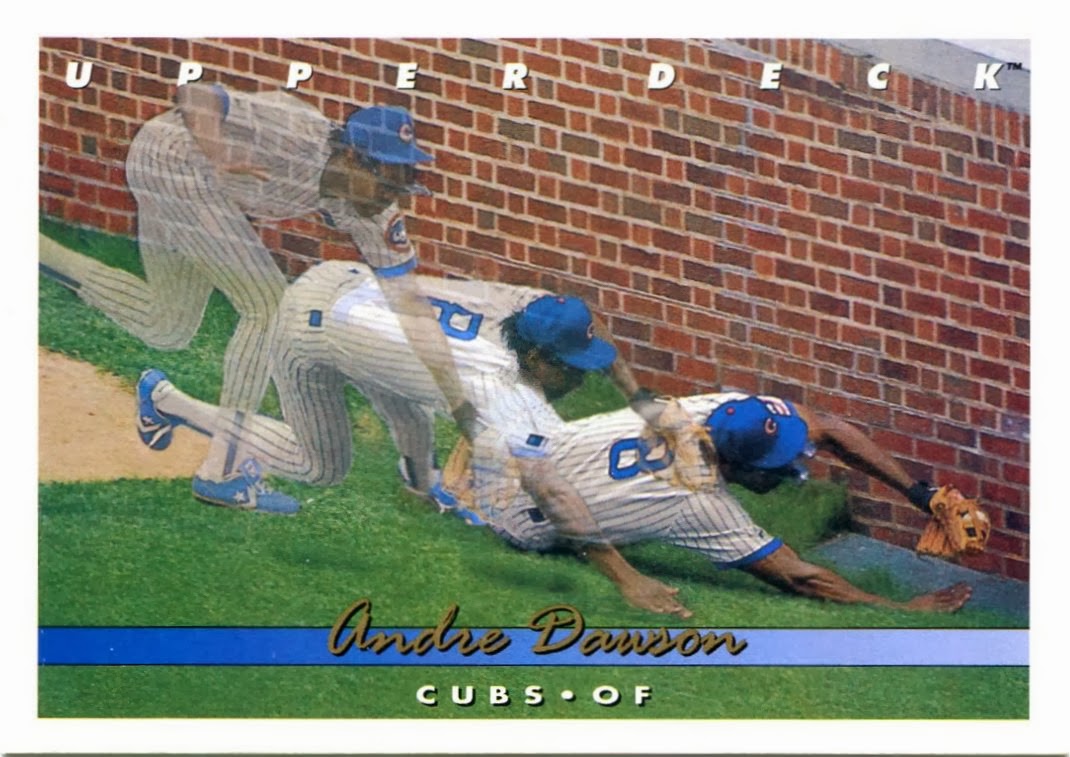 It wouldn't be an official horizontal showcase if I didn't mention 1993 Upper Deck.

Many sets had achieved landscape success before, but I'm not sure any quite did it as well as '93 UD. There are a shocking number of sweet horizontal shots in this iconic checklist.

Perhaps the greatest of them all is card #308 in the set, none other than Mr. Andre Dawson.

I recently mentioned that I'm going to be bringing one of my Cubs binders to school this week for a little presentation. One thing I'm going to do is feature a card from every decade from the '50s until now, as a way to convey the long and rich history cardboard holds.

I've already decided that this very card is going to be the face of the 1990's. While the Cubs weren't very good in the early '90s, Dawson was probably the face of the franchise at that point.

As far as cards go, it's one of the first great pieces I can remember owning. Plus, it uses the hallowed "multiple-exposure" effect, to boot. In three different images, "The Hawk" is shown here making an acrobatic (and dangerous) catch down the right field line.

Not only that, but it gives the collector an angle of Wrigley Field that's not often seen on cardboard. That's visiting bullpen territory right there.

If I'm going to give a lecture on why baseball cards are so important to me, this is a perfect piece to present.
Posted by Nick at 5:45 PM

After seeing your Dawson and Ana's Slusarski... I think I'm going to start a new PC and collect all of the Upper Deck multi-image cards... like these two and the 89UD Nolan Ryan, 89UD Jim Abbott, and the 92UD Deion Sanders SP.