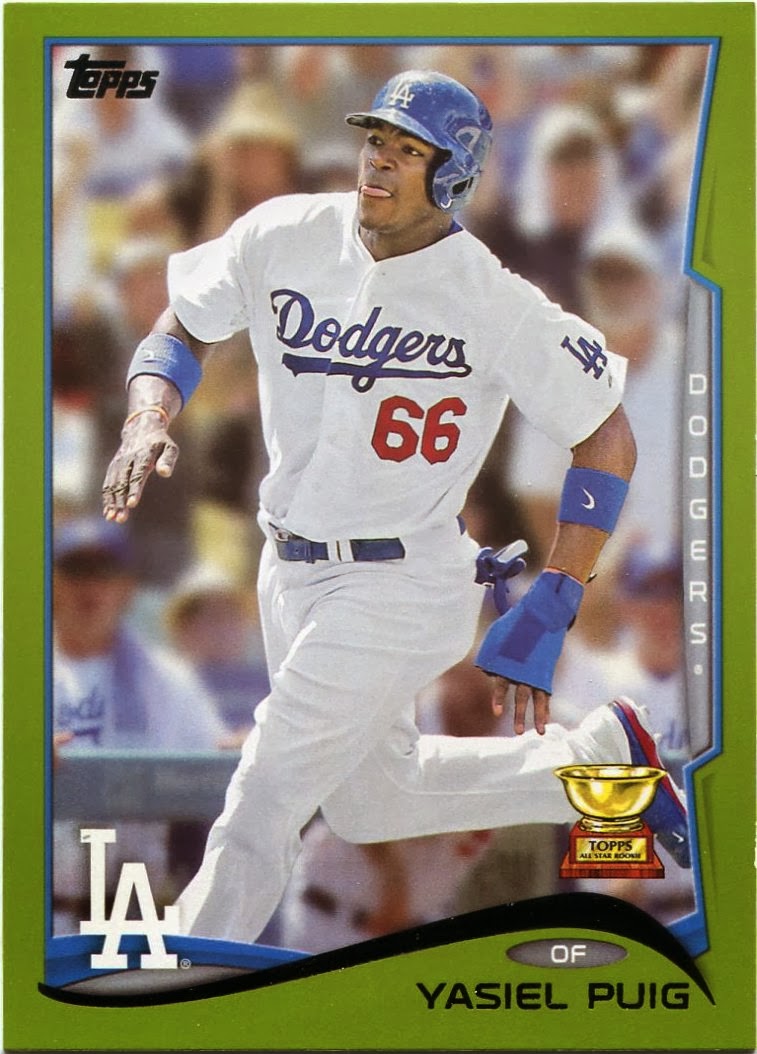 This will be the last post on them for a while, I promise.

What I featured yesterday was just a general overview of the latest and greatest product. Tonight, we'll be taking a look at my top ten pulls from my 2014 Topps extravaganza.

I should note, however, that I did end up taking a trip to Wal-Mart yesterday to pick up four more rack packs of the stuff. The purchase was almost entirely covered by a Christmas gift card I received.

Let's just say that I was really glad I didn't have to put much of my own money into those rack packs. Someone in Topps's quality control department needs to get it together.

I pulled some nice inserts and an obnoxious number of parallels (though the green Puig you see above is a nice keeper), but almost all the base cards I got were doubles.

Between Target and Wal-Mart, I bought a total of three hanger boxes and five rack packs yesterday. And I counted at least 44 sets of doubles, triples, or quadruples. That's not a typo. Fourty-four. Quality control, my ass.

Given that debacle, I still need a whole bunch of base help. I recently posted my 2014 needs on the sidebar if anyone wants to cook up a trade. I also have quite a bit of extras available thanks to the so-called "quality control".

Enough about that, though. 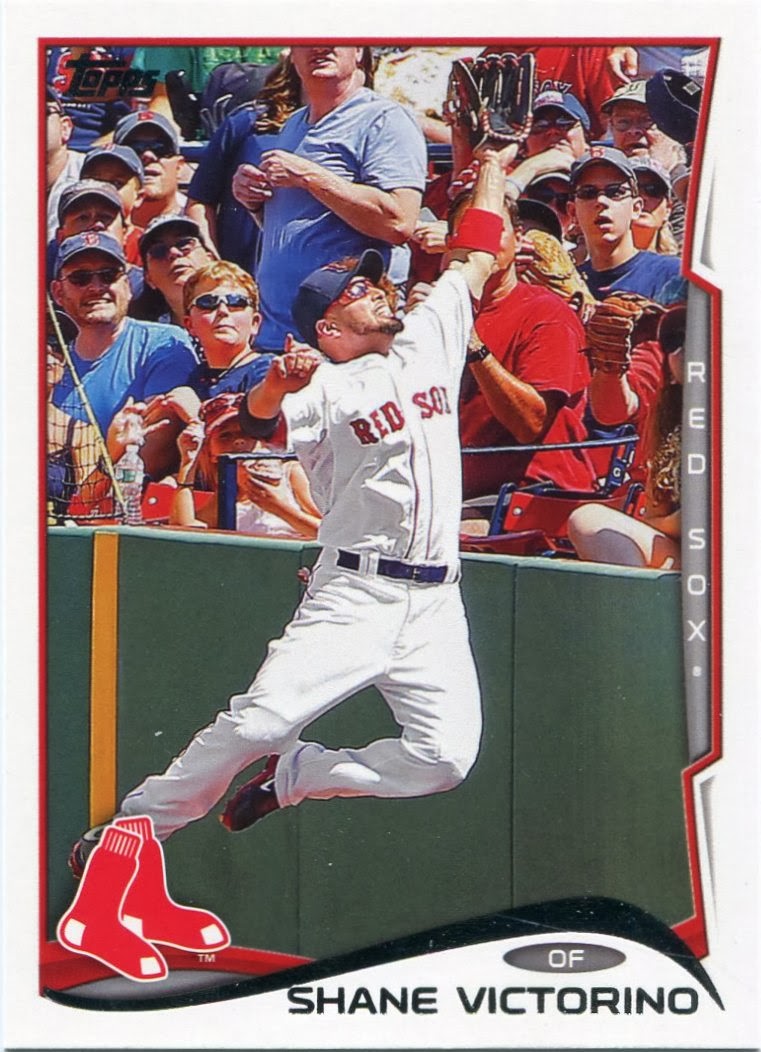 We start off with the "Flyin' Hawaiian" himself, Shane Victorino.

I noticed quite a few acrobatic shots from the cards I pulled, but this one was my absolute favorite. I've come to love the "crowd factor" on cardboard, as looking at the number of different reactions on the fans in the backdrop is becoming an enjoyment of mine.

Plus, we don't get to see "Pesky Pole" territory too often in this hobby. 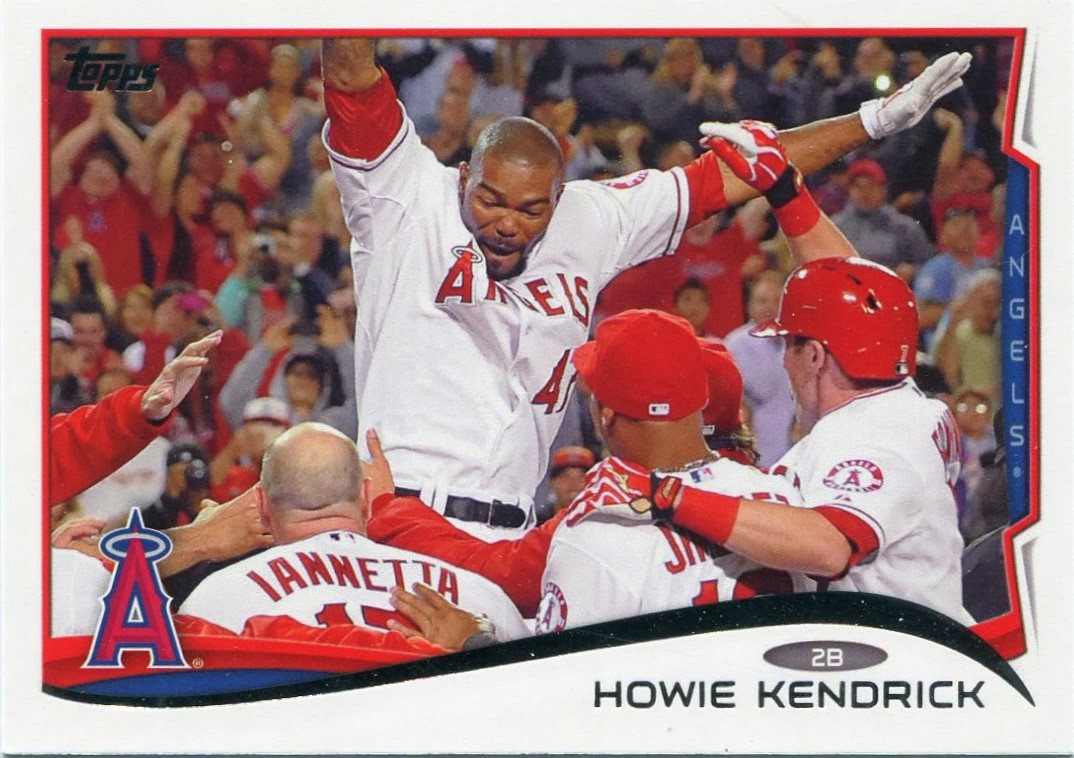 As I mentioned yesterday, 2014 Topps features a whole bunch of neat celebration shots.

Some would argue that it's simply been too much of a good thing with these types of cards during the last couple years.

Personally, I don't think it's possible to overdose on celebrations. They've resulted in quite a few jaw-dropping singles lately. I pulled quite a few good ones, but this Kendrick was my absolute favorite.

Maybe I'm just easy to please, but I will fully support any future celebrations Topps chooses to produce. 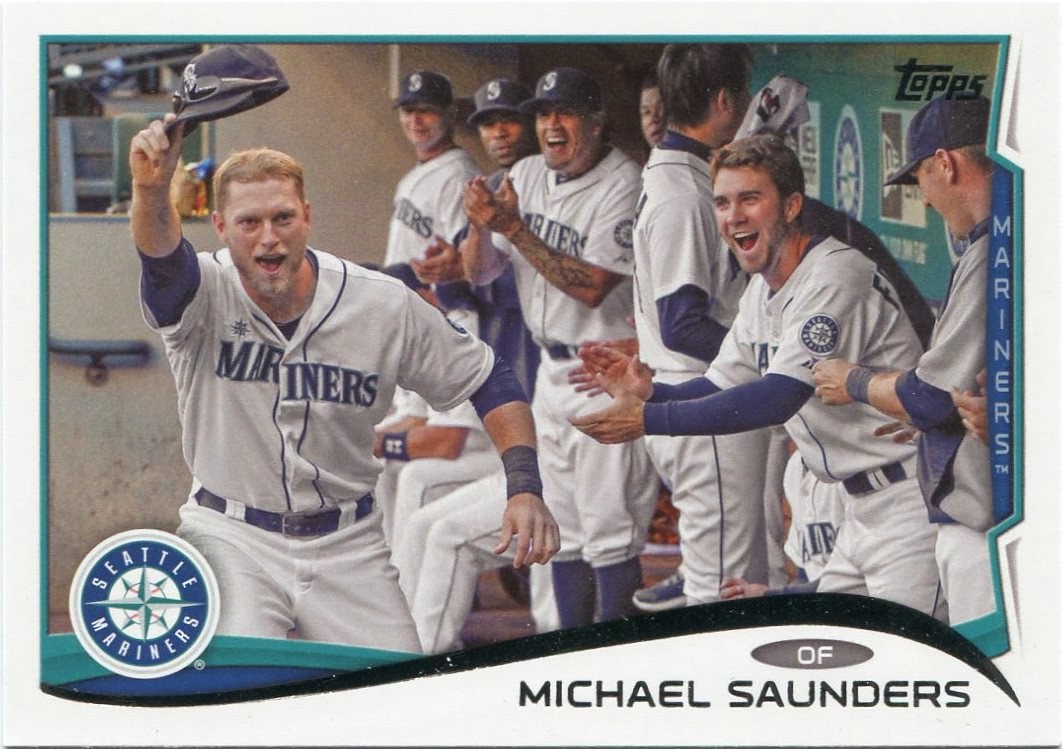 Mr. Saunders is the lone non-"binder guy" to make this list.

In fact, he beat out a beauty from last year in one of the toughest frankenset decisions I've ever had to make.

Like a lot of other bloggers, I'm a sucker for dugout shots. This is one of the better ones I've seen in years.

Granted, I'm not exactly sure what's going on here, but it looks like Saunders and his Mariner teammates are enjoying themselves. 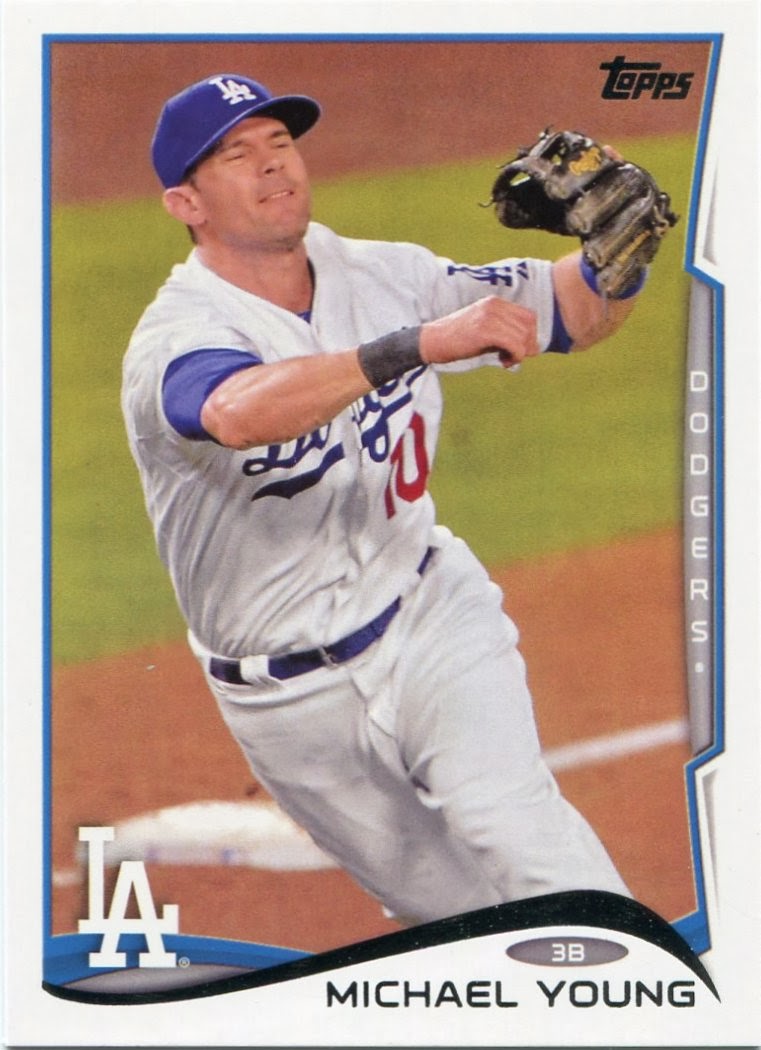 If you're looking at aesthetics alone, this was probably one of the worst cards I pulled yesterday.

It's not a particularly pleasing shot of Michael Young, and it's not much different from a number of cards that have been produced over the years.

However, this is a prime example of when the uniform takes charge. Young was dealt to the Dodgers late in the 2013 season, too late to have a card in Update.

He's currently a free agent, and there have been rumblings about a possible retirement. I was starting to worry that we'd never see a card of Michael Young as a Dodger.

If it doesn't wind up being a "sunset" card, it'll most certainly feature a wildly unfamiliar uniform from Young's Rangers-dominated career. 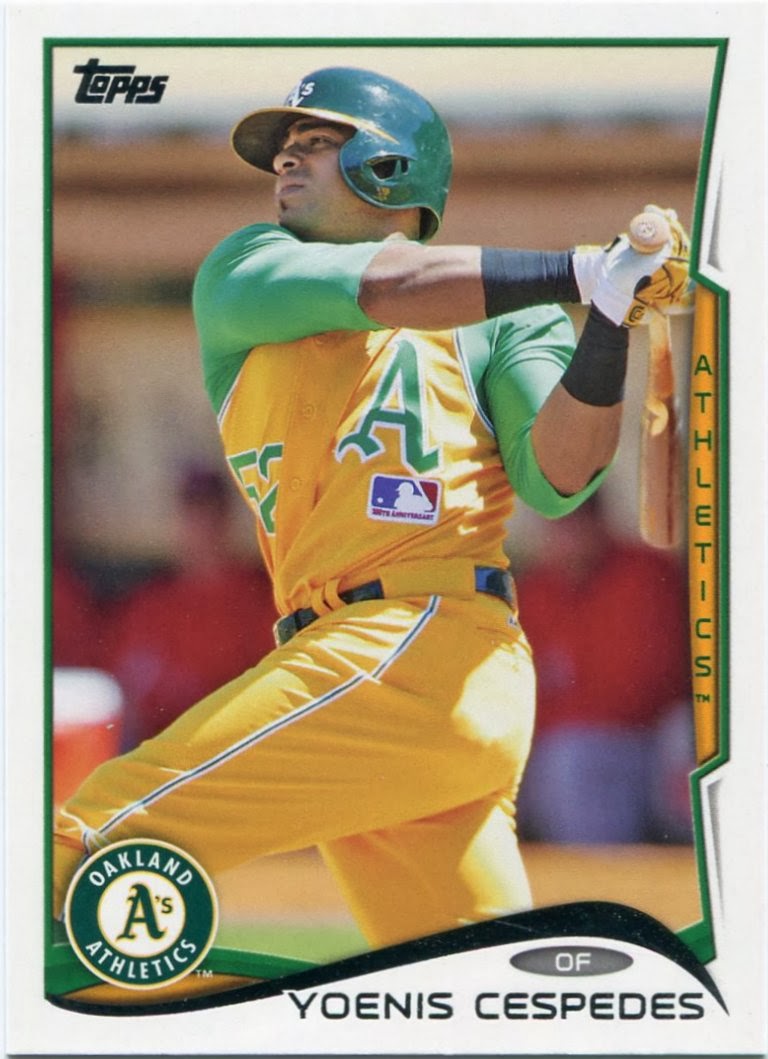 Though I didn't get the one A's card I really wanted, this Cespedes was a nice consolation prize.

A quick glance at the 2014 Topps checklist reveals a ton of sweet, sweet throwbacks. I was quite ecstatic when this one fell out of my hanger box.

I'm no uniform expert, but I believe all MLB teams wore those logo patches to commemorate baseball's centennial in 1969. What we're seeing here, then, is a blinding 1969 Oakland A's throwback. I'm all for the A's bringing these back full-time in 2014.

Was it the best throwback of the bunch, though? 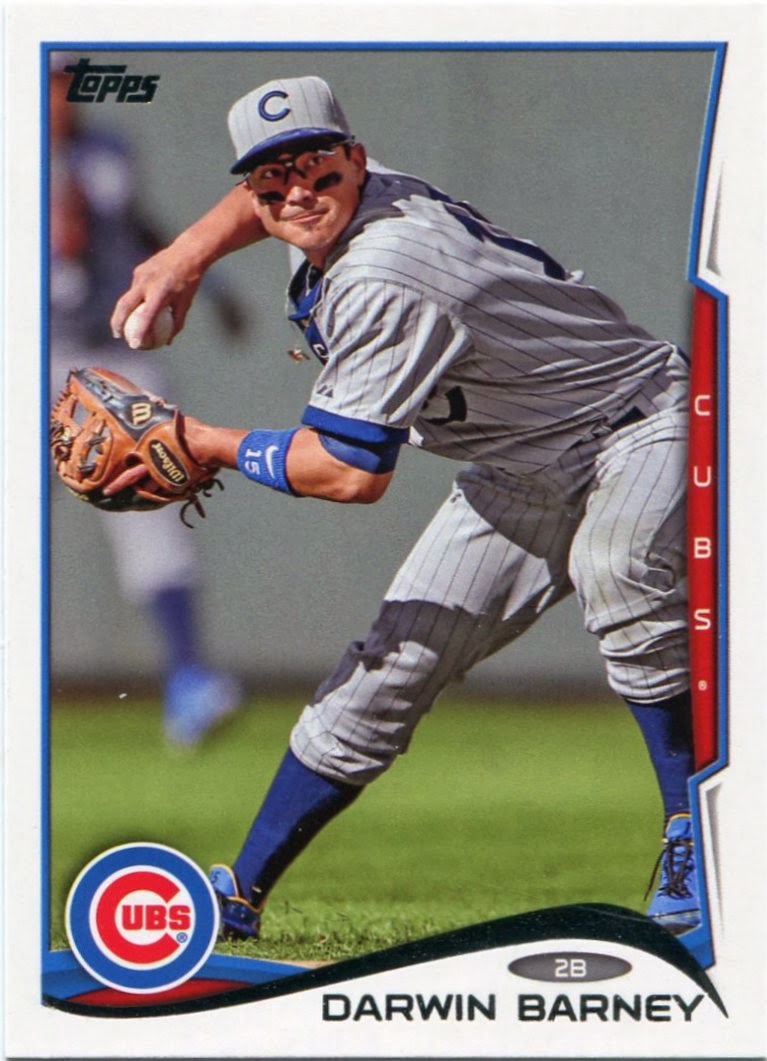 I have to give the nod to my Cubbies here. They sported these awesome 1909 throwbacks in a midseason game against the Mariners last year. (Luis Valbuena is also featured in throwback mode in 2014.)

Like celebrations, I'm not sure I can ever be fed up with throwbacks. 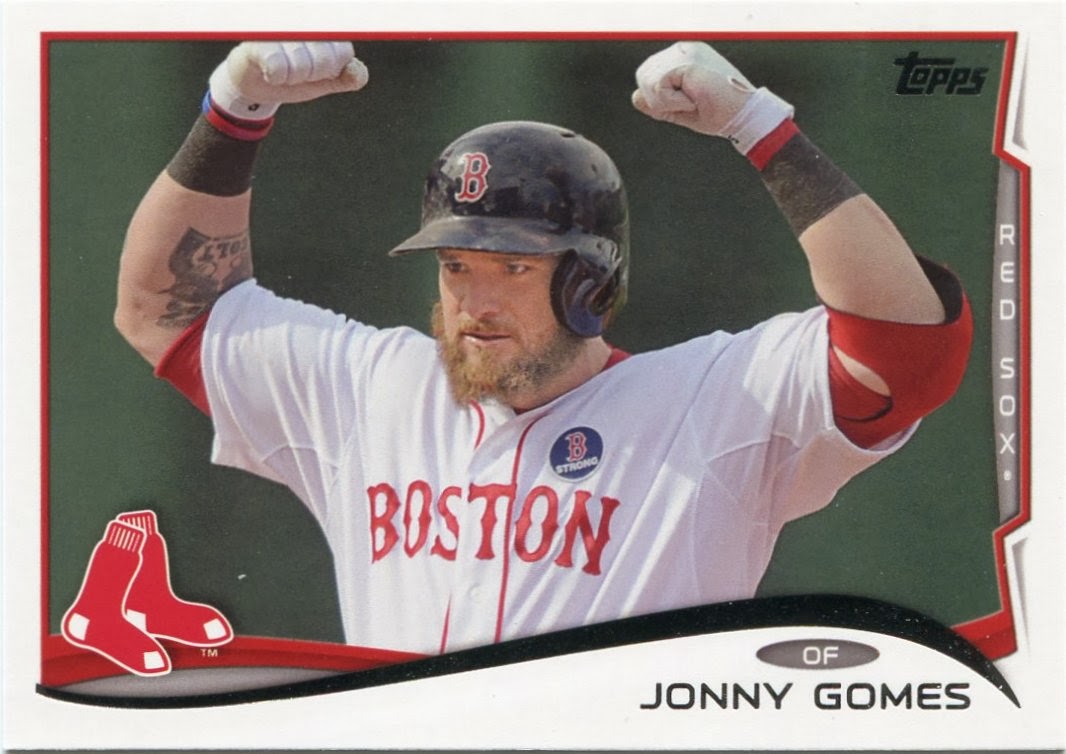 Topps did us tight-budgeted collectors a favor this year, though. The "Boston Strong" jerseys make an appearance on Jonny Gomes's terrific horizontal 2014 Topps single.

And, yes, it's a regular ol' common. No more of that short-printing business.

Speaking of the Sawx... 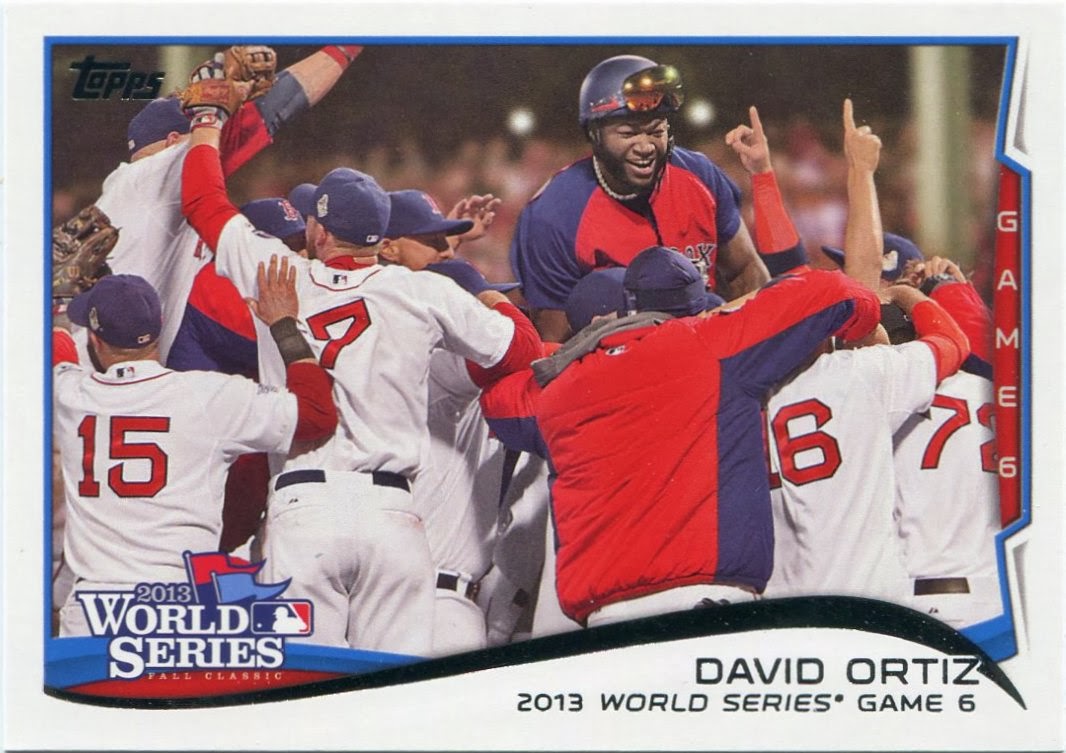 I think it's safe to say that David Ortiz is a Boston icon at this point.

His 2013 postseason was one of the baseball's better playoff efforts ever. I don't know that I've ever seen a more dominant performance.

Backed by "Big Papi", the Red Sox won it all last year. In a World Series-clinching celebration shot, Ortiz is seen here sporting a huge army-like helmet that made quite a few appearances in the 2013 postseason.

You're still the man, Papi. 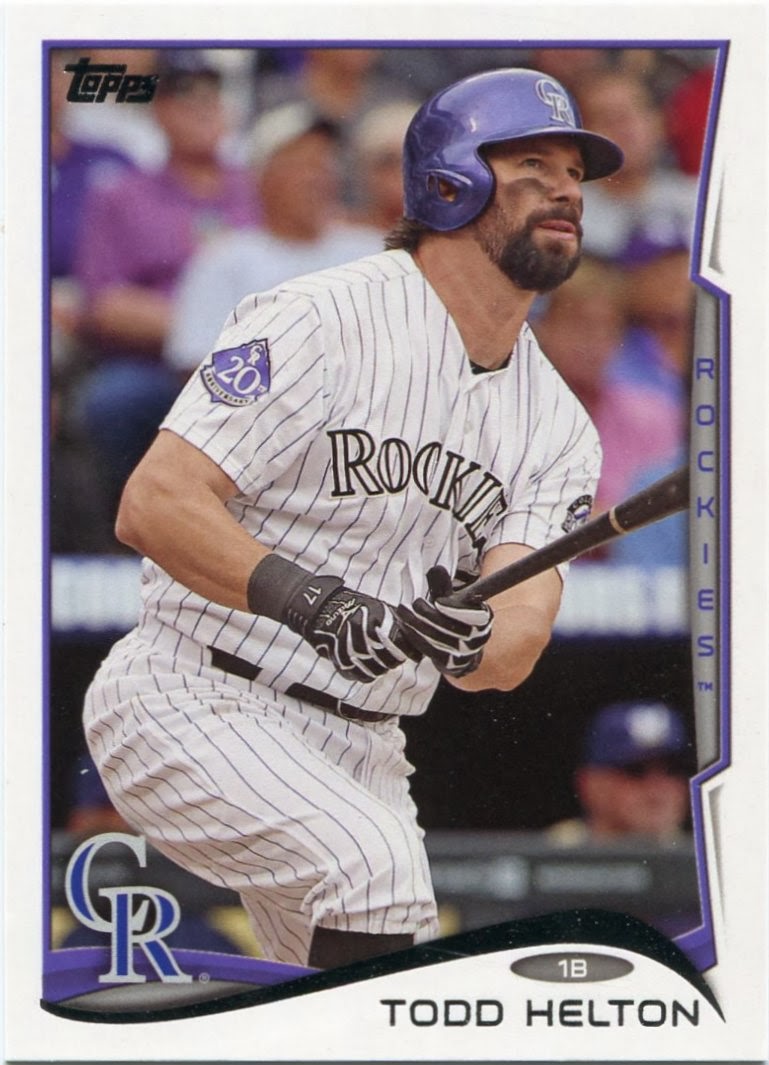 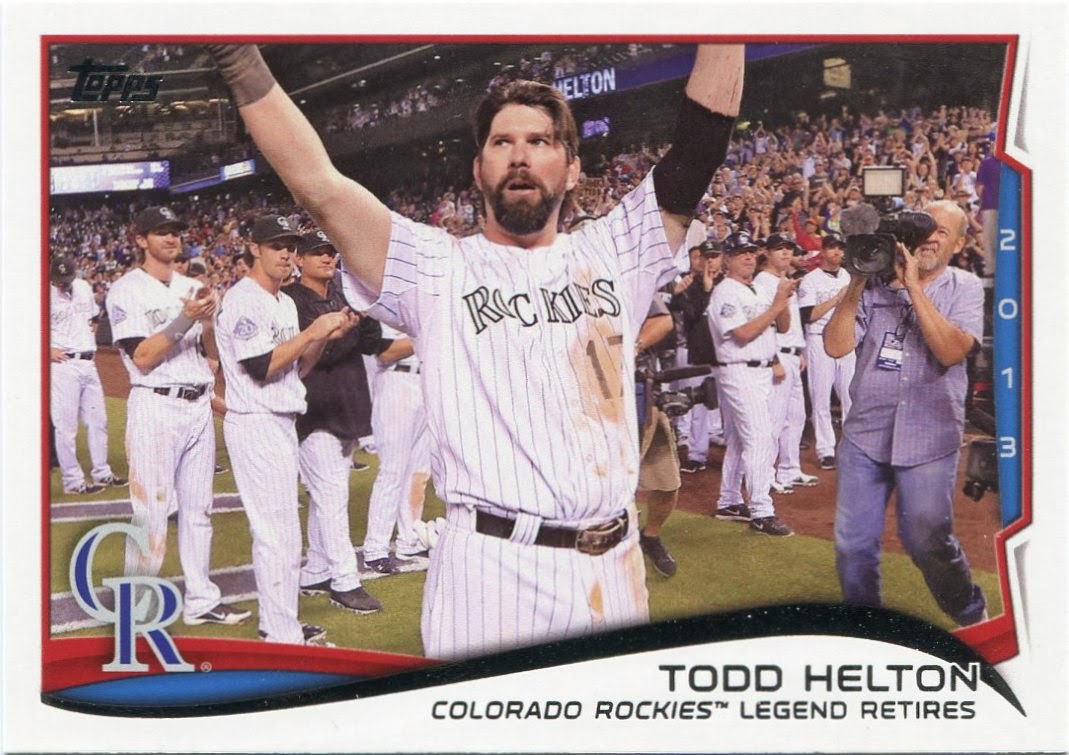 I couldn't help but cheat here.

Topps gave Todd Helton not one, but two cards in this year's Flagship checklist. Since I couldn't choose between them, both made the list. I didn't think he'd get any, to tell you the truth.

While I'm not usually a fan of a player making multiple appearances in a single set, I can make an exception for Mr. Helton.

His standard base card (appropriately at #17 in the checklist) features full career stats on the back, something that's a huge plus when it comes to the world of "sunsets".

As an added bonus, Topps also gave Helton a spectacular "Highlights" issue, one that shows his final farewell from the National Pastime.

What could top those? 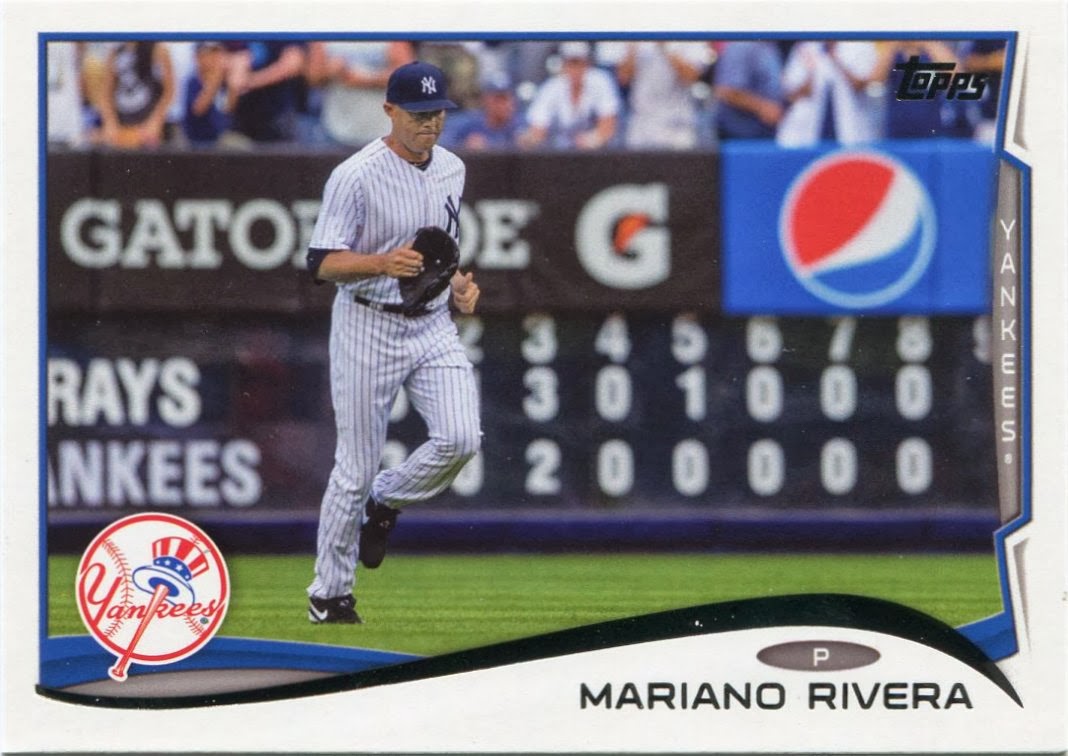 I think we have an early candidate for "Card of the Year" here.

When I'm opening a pack of cards, I don't usually linger. I zip through my pulls fairly quickly, waiting until after all is said and done to really start absorbing what I landed.

With this one, though, I stopped and stared for a solid minute or so. That's pretty much unheard of with my pack-busting rituals.

Then again, "sunset" cards as great as this one are pretty much unheard of in this hobby.

Like Helton, I didn't think Mariano Rivera would be featured in 2014. But, lo and behold, here he is with full career stats on the back.

In a staggeringly awesome horizontal shot, "Mo" is seen here doing what he did better than anyone else in his career. Coming in from the bullpen to save the day.

I guess it's fitting that he goes out that way.

I can honestly say that this is one of the better "sunset" cards in my collection.

You knocked this one out of the park, Topps.
Posted by Nick at 6:27 PM

I'm doing the visual equivalent of plugging my ears and screaming "b;ah, blah, blah!" Other than brief glimpses before quickly shifting my gaze elsewhere, I've still only seen the ubiquitous Puig card from this set. I'd better get to busting these things soon so I can go back to reading card blogs!

The one thing I could get behind Topps doing is providing a couple of sunset cards like this every single year. Not for everyone, mind you, but for special players like Helton and Rivera. I guess Roy Halladay would have fit as well, but he probably just retired too late for the honor. There is also a second Rivera as well. I don't think I like the 2 cards per person, but there are worse things. Like the ridiculousness of card #7 still not existing.

BTW, you must have inadvertently transposed #'s 1 and 2 here. What other reason would there be for Todd Helton NOT being #1?

I'll take any dupes of your Red Sox. Probably the only cards I will get from 2014 set

I like Mo's card from last year's flagship better than the one here, but there's ANOTHER Mariano card in the set that shows when Jeter and Pettite took him out of his last game that is awesome.

Oh, and that Cespedes card is awesome.

I'm just glad this will probably be the last Mariano Rivera card we see for a while. Don't get me wrong, I appreciate and respect his career as much as the next guy, but talk about fatigue. Last season was a non-stop Mariano praise-fest from the media. You couldn't turn on a TV without hearing about how special he was. I was hit over the head with it so much that I just wanted him to go away, and I'm secretly glad he's gone.

I can't wait to pull that Mariano.

Ohh They are out already!? Lets see if I can get some packs of it..