A beginner's guide to damage 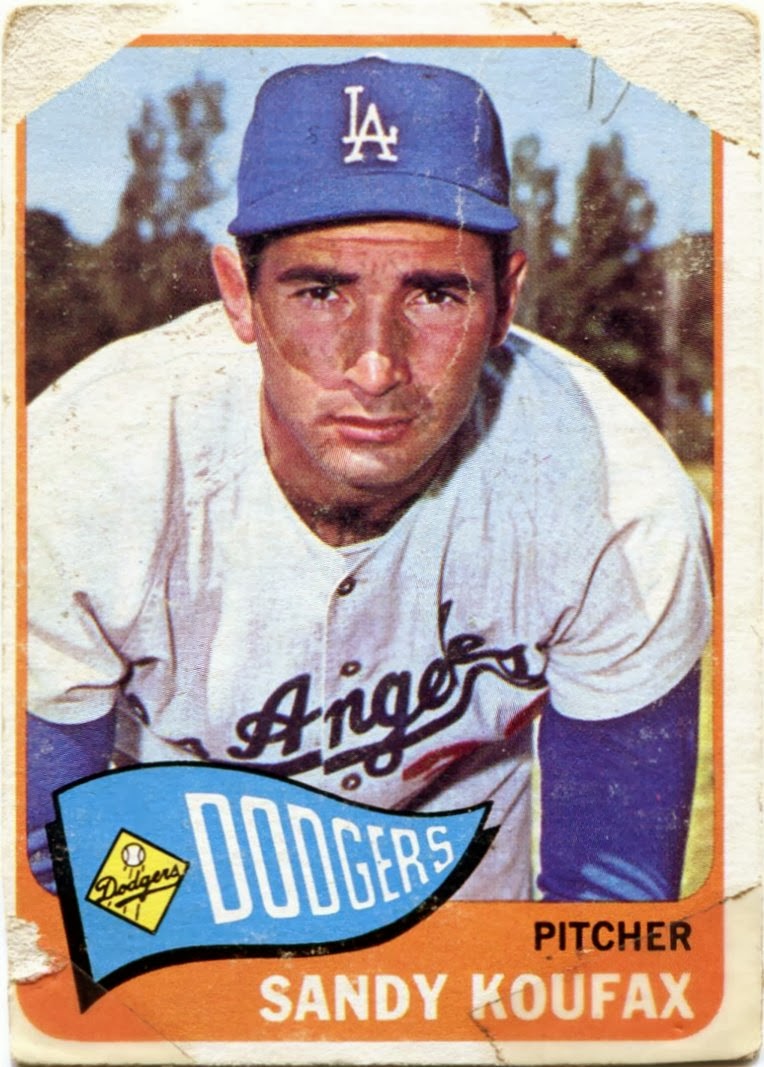 I may be on the younger end of the collecting spectrum, but I sure feel like a veteran when it comes to digging through discount boxes.

Dime, 5/$1, quarter, etc. bins are usually made up of cards that most vendors simply don't want. You're bound to find quite a few forgotten heroes in a dime box. I can't tell you how many Scott Podsedniks I've landed for loose change.

Vintage discount bins are a bit different. Most of the cards you'll find are ones that could have some so-called value to some people, if it weren't for one or multiple mutilations that make them flawed in the eyes of many.

Those "flaws" come in a variety of different forms. I won't say I've seen it all, because you literally never know what you're going to find next in the world of discount vintage. But I've seen a lot.

Many of the flaws you'll see flash back to a simpler time, a time where no one saw any kind of future cash value in their baseball cards. Kids would tape their favorite cards to their wall or a binder without a second thought.

That's probably what happened to the '65 Koufax you see above. At some point in its lifetime, a brave soul tried to pry the tape from the wall or binder to which it resided. The bottom two corners still have that vintage tape residue, but the top two weren't as lucky. Those suffered some paper loss in the process.

Such history adds quite a bit of character in my eyes. And it certainly makes things more budget-friendly.

Did I mention my '65 Koufax only cost me three bucks? 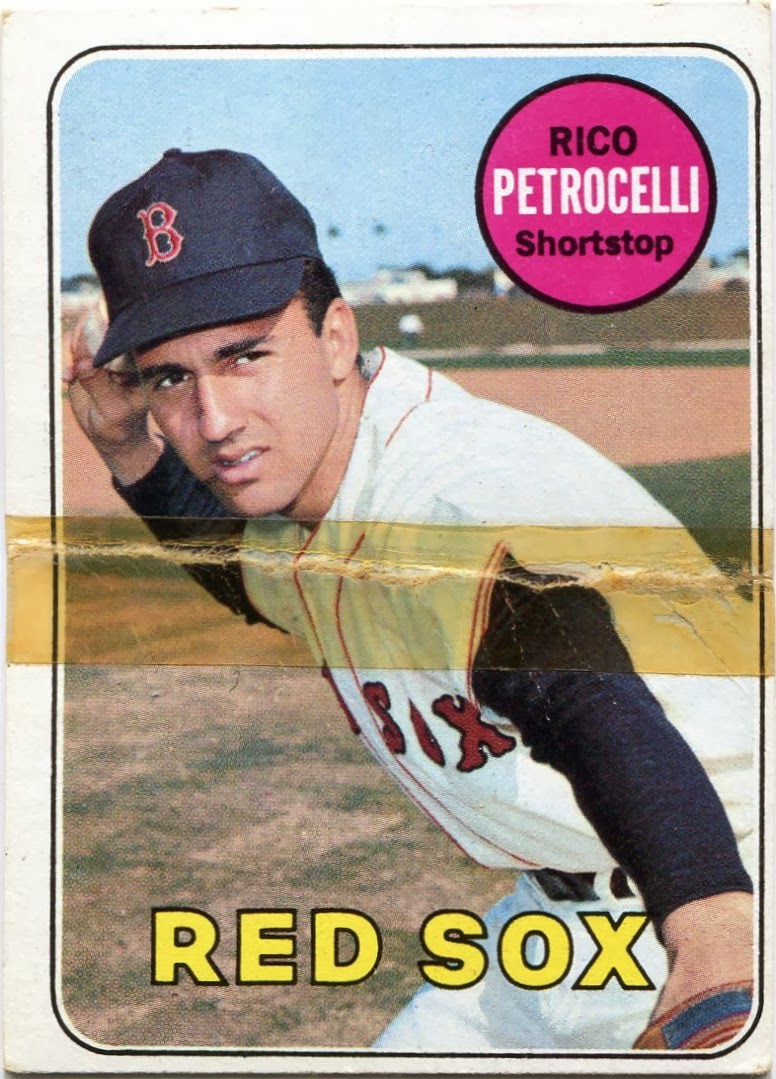 Two questions pop into my head whenever I see this card.

Why would someone rip a 1969 Topps Rico Petrocelli in half?

Maybe the person in question was a Yankees fan. Or maybe he or she really hated Rico Petrocelli. Or both.

To me, the second question is far more puzzling.

Why would someone tape it back together?

I've never been able to come up with a good answer for that one.

Your guess is as good as mine. 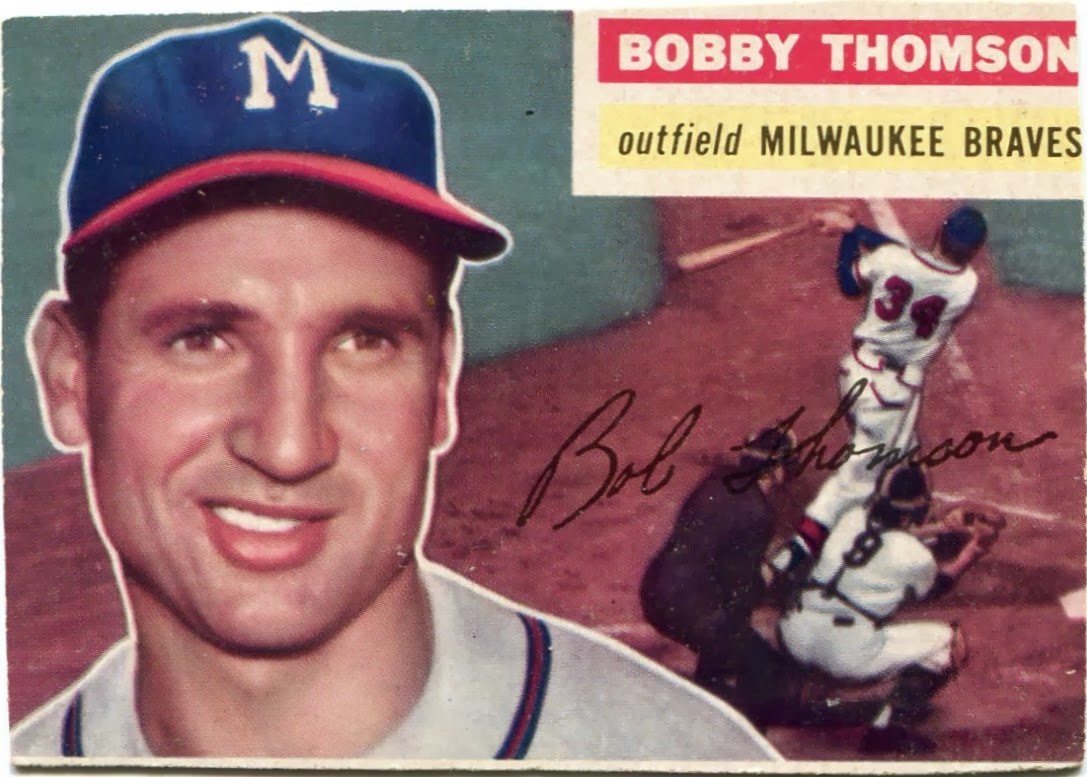 No, this isn't a faulty scan job.

My '56 Bobby Thomson is a special borderless parallel.

Okay, that's not entirely true. Someone just decided to lop off the edges at some point. I'm guessing it was an attempt to trim it down to the "standard" proportions that Topps started using in 1957.

I have a few other borderless vintage cards in my collection as well. It's neat to see how collectors in past generations sought to customize their cardboard.

I don't know if I could ever bring myself to do something like this, though. 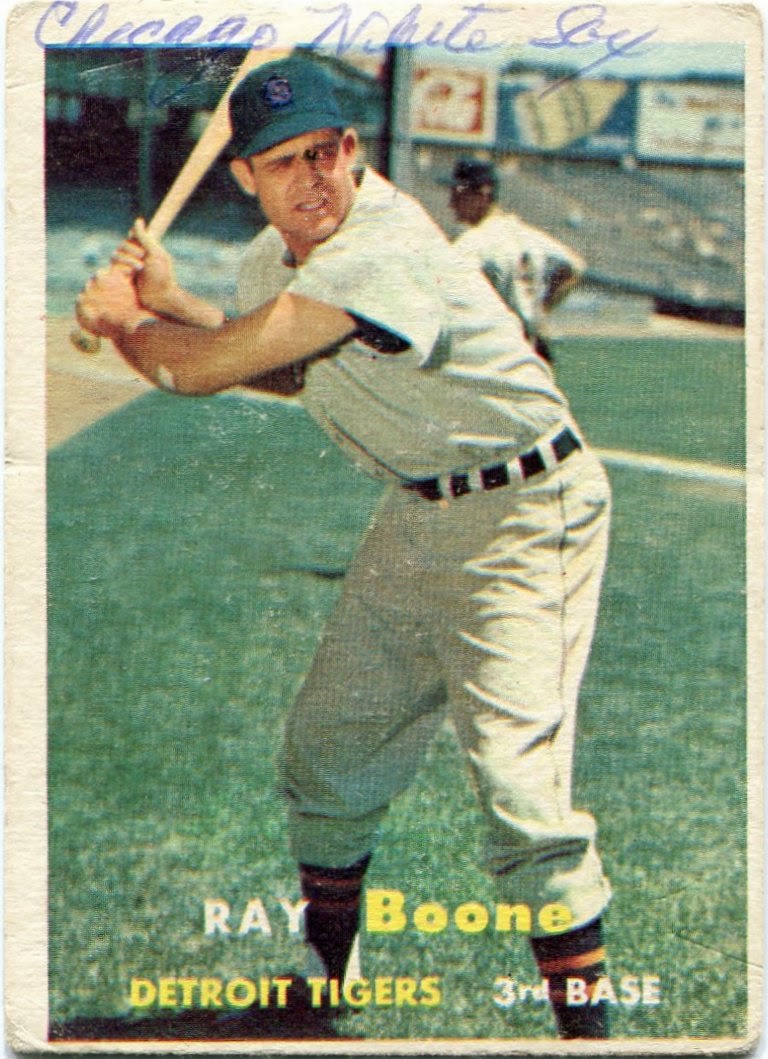 Collectors in the early days of baseball cards didn't have Traded or Update sets that were released at the end of the year.

The dreaded high-numbers were as close as it got, but even those didn't cover all the bases. As a result, some decided to take things into their own hands.

An eager fan scrawled "Chicago White Sox" at the top of this '57 Ray Boone to reflect the former infielder's trade to the Windy City, even scratching out the logo on Boone's Tigers cap.

Since the swap was made in 1958, I'm guessing the "update" was made at some point during that season 56 years ago.

That's a whole lot of history right there. 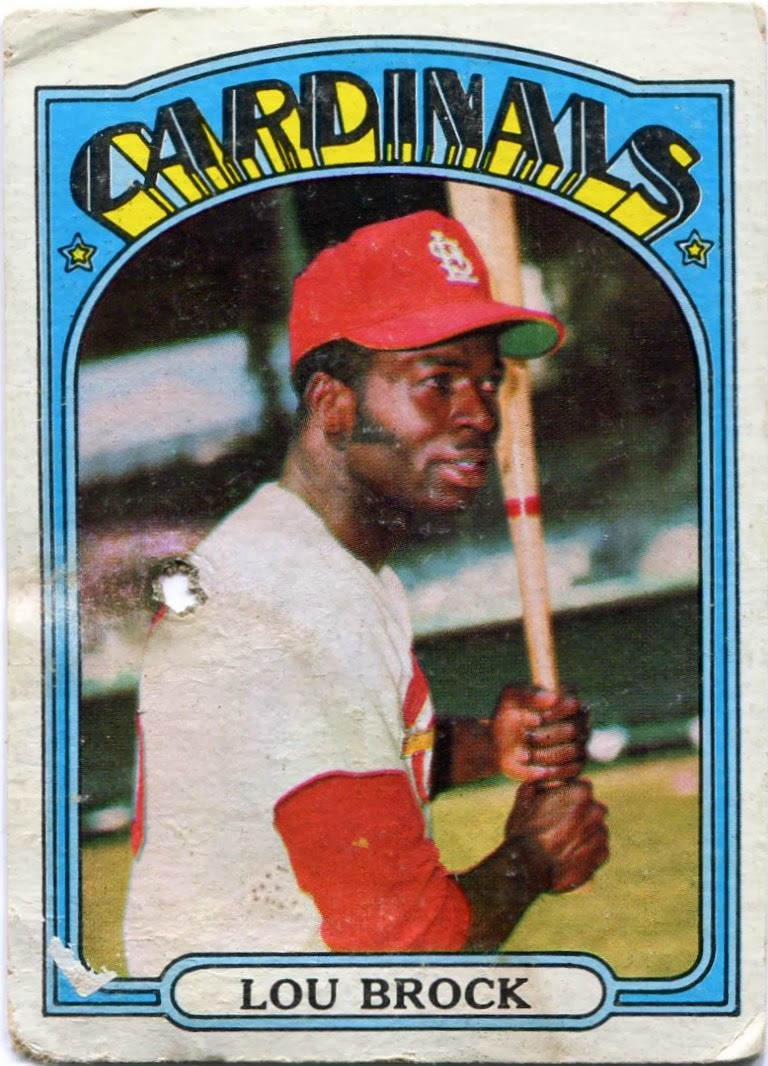 A couple of my cards, for one reason or another, have holes on them.

Some look as though they were customized for pinholes, but I'm not so sure about this Brock. To tell you the truth, I'm not sure what demonic fate it had to suffer through in its past. That's not where pinholes usually go.

It seriously looks like someone took a BB gun to the Hall of Fame speedster.

I don't want to know why. 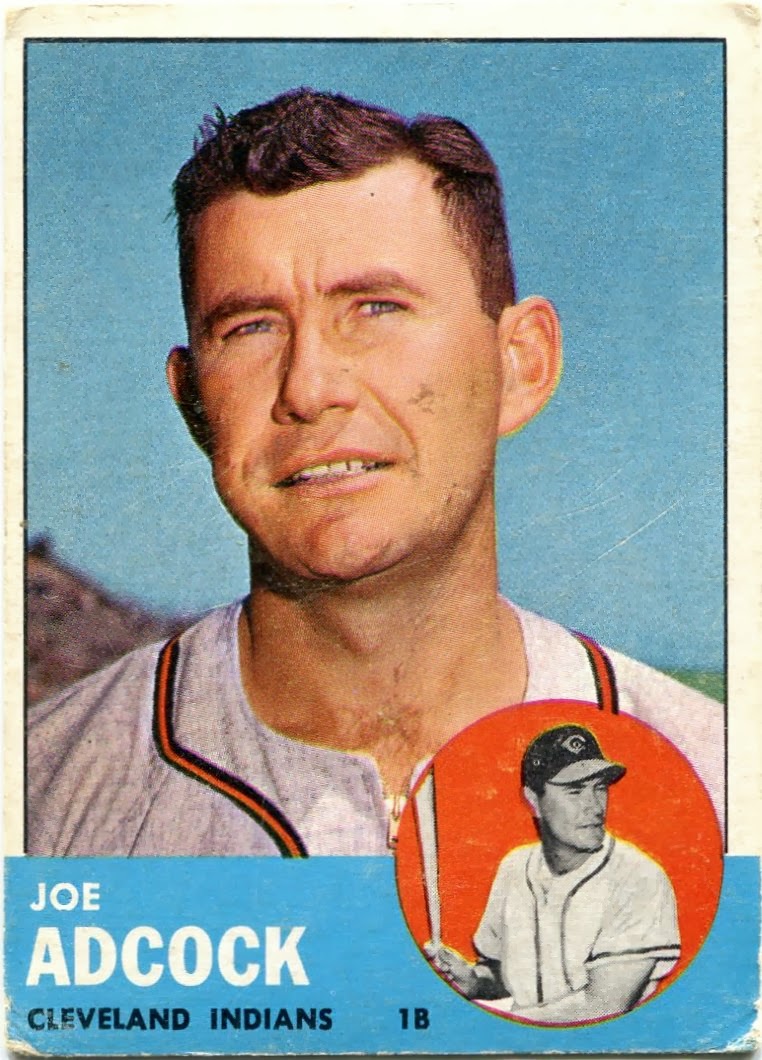 This one looks downright mint compared to the other "flawed" cards I've shown thus far.

It wasn't ripped in half at one point. Its borders are fully intact. And there's not a hint of writing on it.

Still, many condition sticklers would point out Mr. Adcock's dinged corners. (Also known as "soft corners" to some.)

I can't tell you how many heavy discounts I've received on cards that have a corner flaw or two. They're really not even that noticeable.

I'll certainly put up with a few soft corners if it gets me a great "sunset" card like this one for fifty cents. 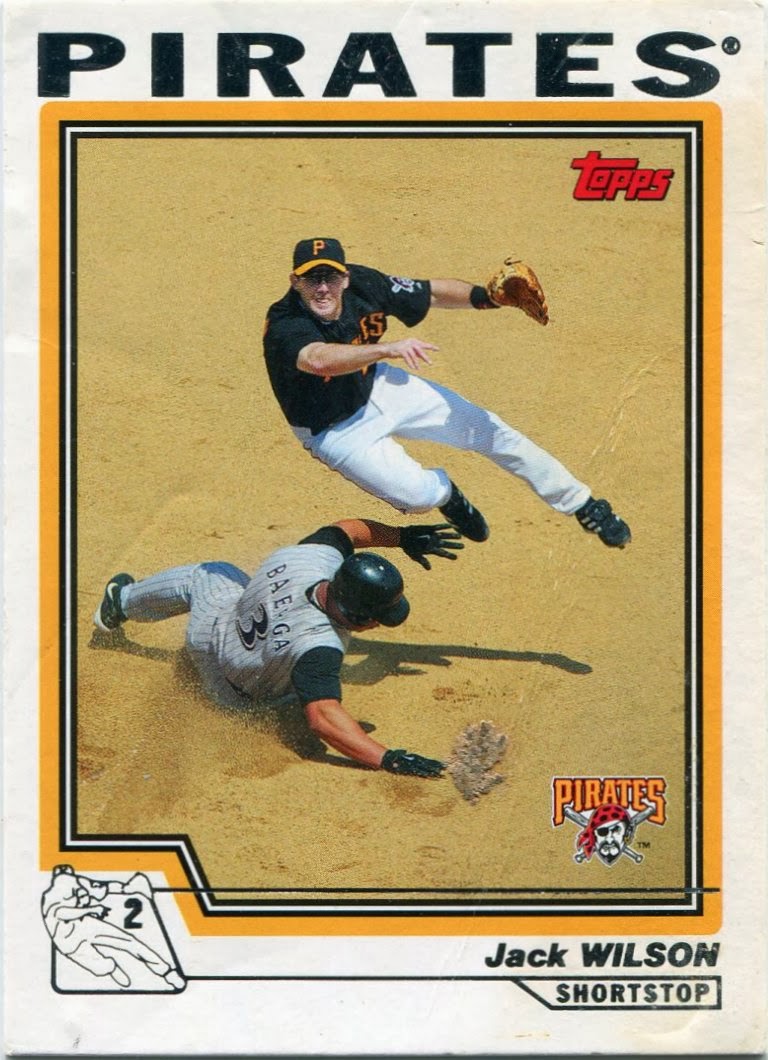 A few of my more modern pieces have some fairly significant flaws. The card you see above was in a binder that I got in a garage sale lot I bought last year. (A few other cards understandably overshadowed Mr. Wilson, though.)

This fantastic "double dip" and "tatooine" piece happens to have some dreaded creasing on its surface, including an especially significant one on its right-hand side. (There's also a mysterious bit of gunk near the right hand of Carlos Baerga.)

I'm sure a lot of kids from the '50s and '60s folded up their favorite cards and put them in their pockets at some point. Hence, the creases.

That said, I'm not too sure how a 2004 Topps Jack Wilson suffered such a fate. 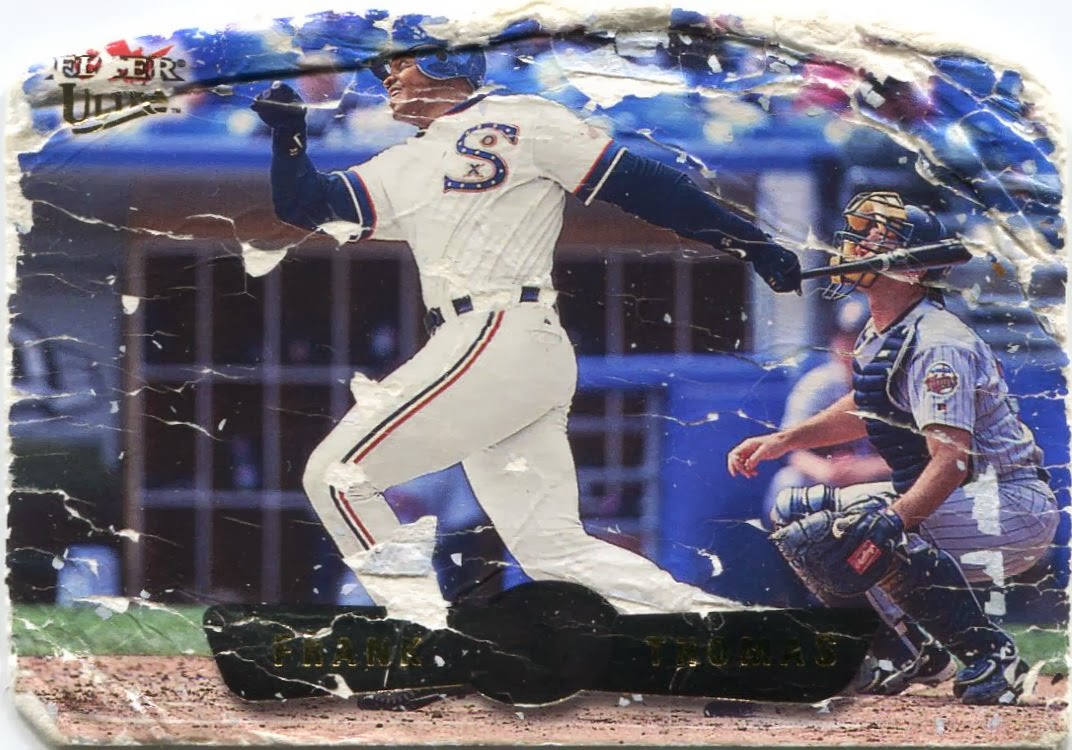 I mean, how could someone let one of their cards go through the wash? What kind of feeble-minded, moronic, idiotic person would...

This one was my fault.

I've mentioned my "washer-used" 1975 George Brett rookie quite a bit on this blog. That one was a secondhand pickup from a fifty-cent box a few years ago. It's one of my most prized possessions.

However, I'll admit that I played a role in creating a few "washer-used" cards when I was younger. I think I picked out a few cool cards to show my friends at school one day and simply forgot they were in my pocket when I went to bed that night.

At some point, they went through the wash. That's probably when I discovered what I'd done. A perfectly nice "throwback" shot of Frank Thomas was now mangled.

Despite that, I still keep it in my White Sox binder to this day.

It's a great final chapter in "The Beginner's Guide to Damage".
Posted by Nick at 6:38 PM

I'll see if I can dig up an upgrade on that Jack Wilson for ya.

I always wonder what the story behind a damaged card is. I have a card from the Fleer Ted Williams set that looks like it was used for bb gun practice. Guess the kid wasn't too fond of the Splendid Splinter.

That Big Hurt is hurting big, but it's a piece of art, nonetheless...

I really dig that Lou Brock with a bullet.

Nick, I bought the 1989 Bowman Dodgers team set, and used a spare Fleer Team Logo sticker (fir sizing purposes) to aid me in trimming the top and bottom of each card, just so they would fit into regular boxes.

And I am very happy that I did. They're still in 'Mint' condition to me!

My damaged card binder is seriously jealous of that Thomas. Wow... that card is awesome.

As for the vintage, I tend to call them "cards with character", rather than damaged. I wrote a post similar to yours a couple of years ago... here's a link if you're bored and have a few minutes to spare: