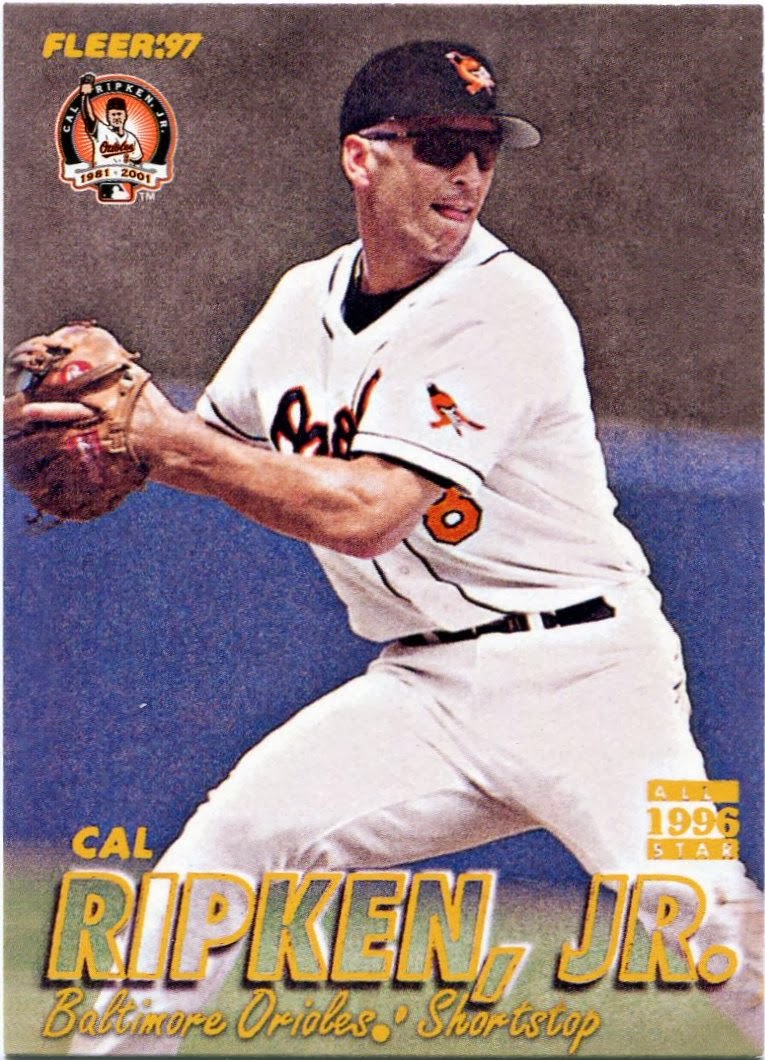 I've often wondered what a baseball card addiction meeting would look like.

I always envision a dimly-lit room with a bunch of longtime collectors sitting in a circle, clutching empty rack pack wrappers and barren hobby boxes.

When it's my turn to speak, I'd get up in front of the group and introduce myself. Then the "therapy" would start.

Why are you here, Nick?

Well, I think I'm starting to develop an addiction to repacks.

Why do you get such a thrill from them?

Where do I begin?

I love peeking into the front window of a repack, getting that first sense of what might be ahead. I noticed this neat Ripken reprint staring out at me from a familiar 100-card repack at my local Target. It's a terrific oddball that hails from a limited edition set of the "Iron Man" from 2001.

I was instantly rendered powerless.

That thing had to come home with me. 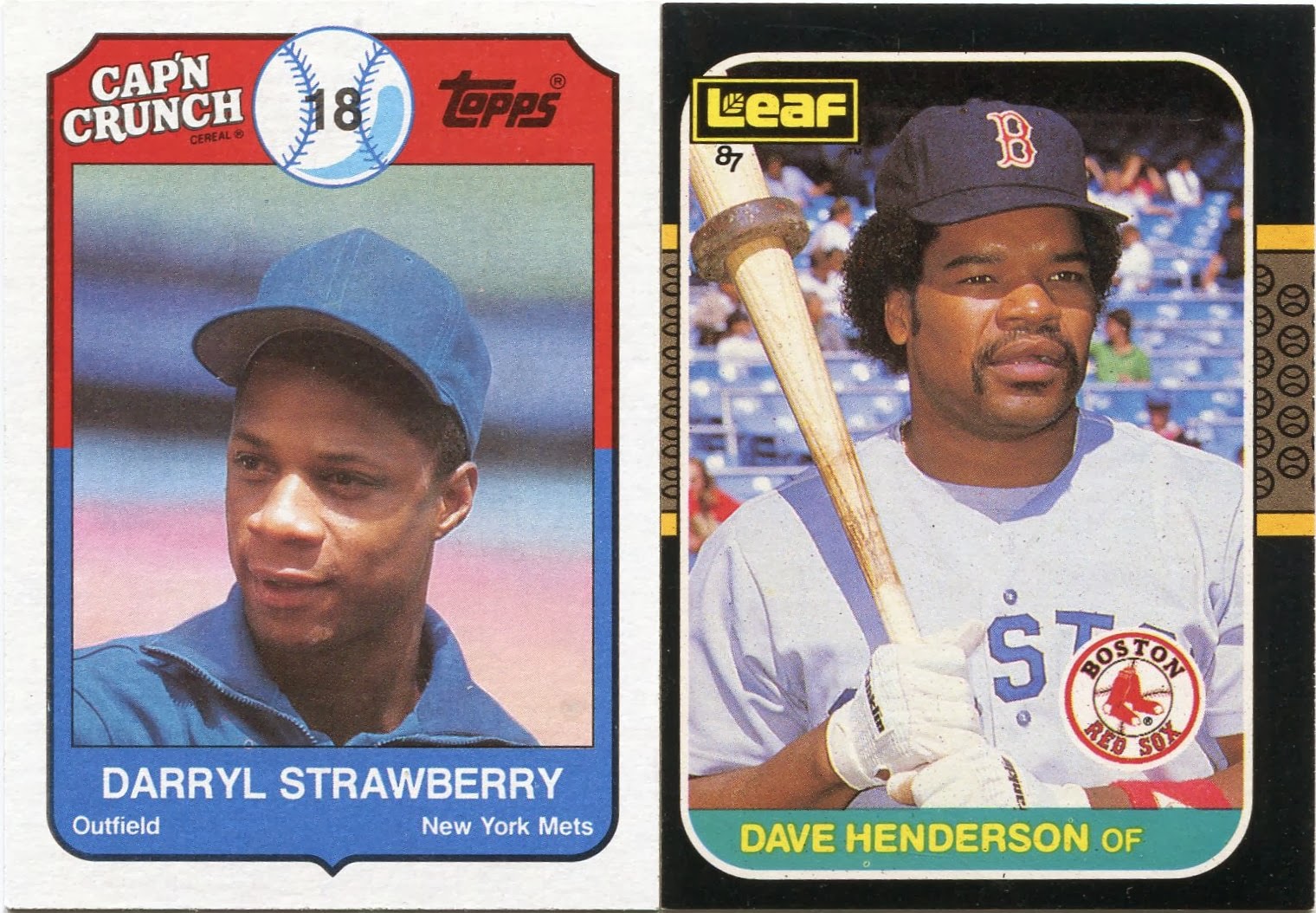 Repack oddballs in general give me quite a rush.

I'm still on the fence on whether or not I consider Leaf an oddball set. I was lucky enough to pull the French-themed single of forgotten hero Dave Henderson from this repack.

For now, I tend to classify them in the oddball realm. 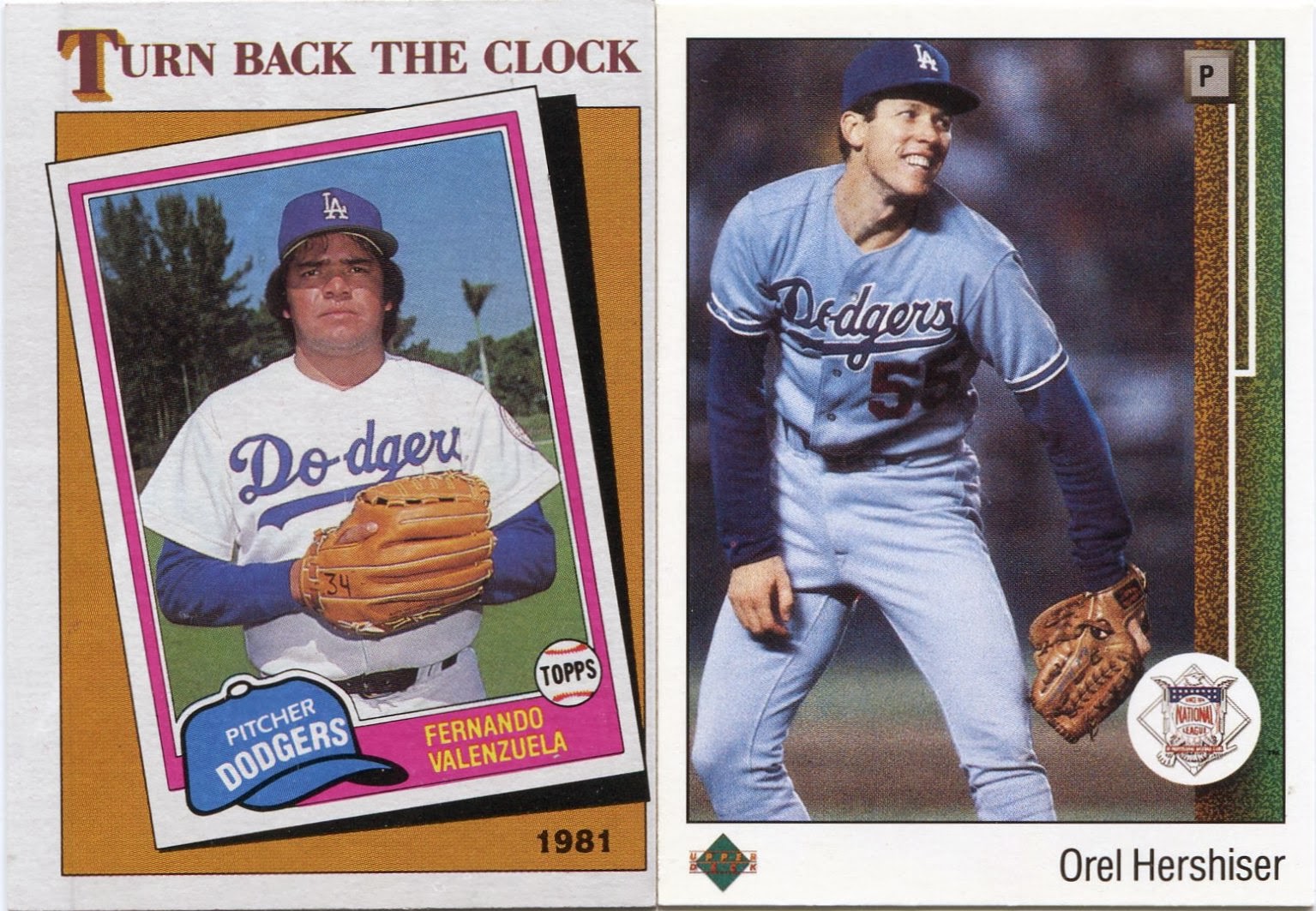 Part of the thrill of a repack is the number of different eras that are usually represented.

Though you're bound to pull an ungodly amount of 1988 Topps and 1989 Fleer from these things, you might just find a few cool new '80s cards for your collection.

I know these were both treasured new adds to my Dodger binders. 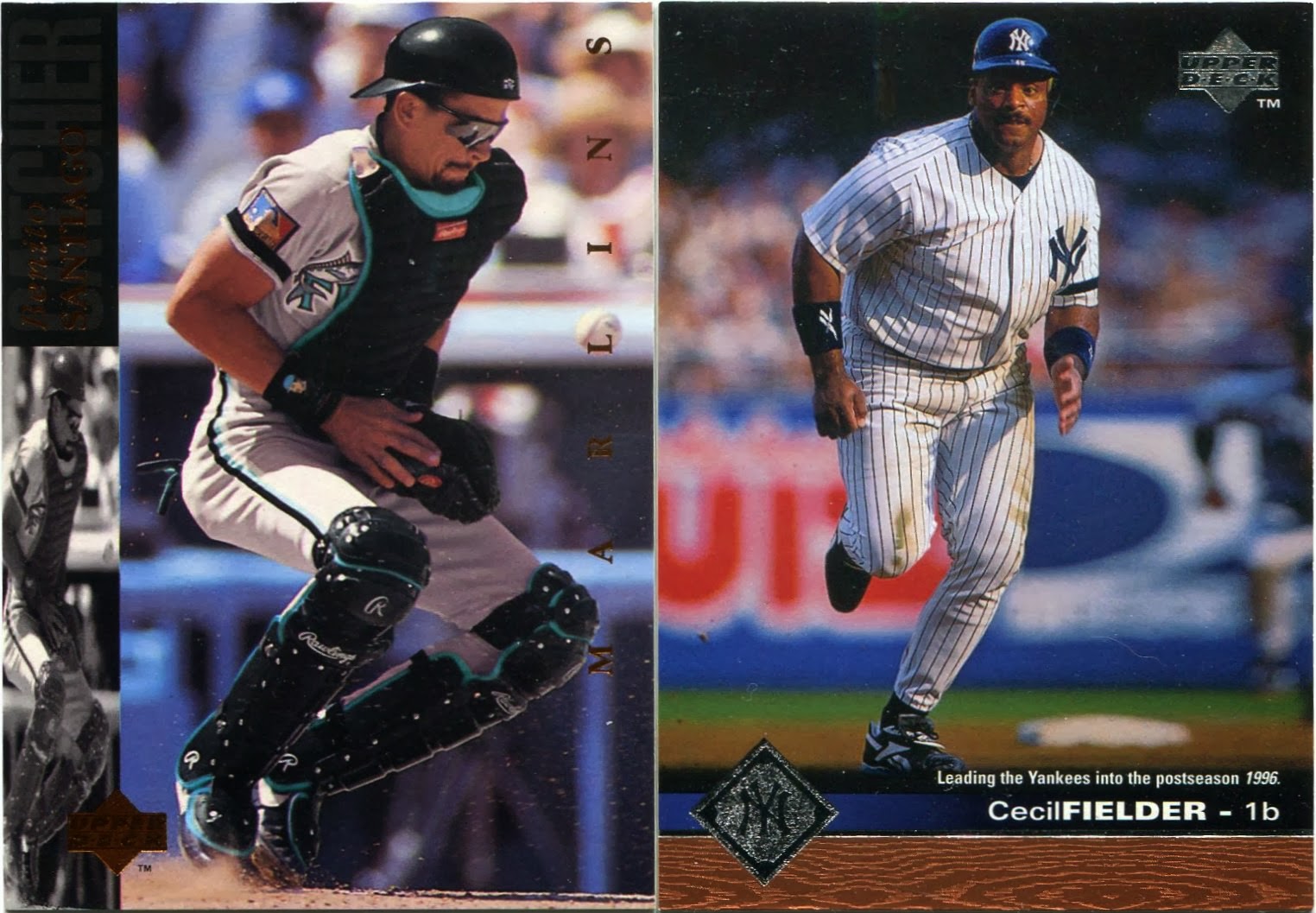 Perhaps you might get a few from the largely forgotten Upper Deck releases of the mid '90s. 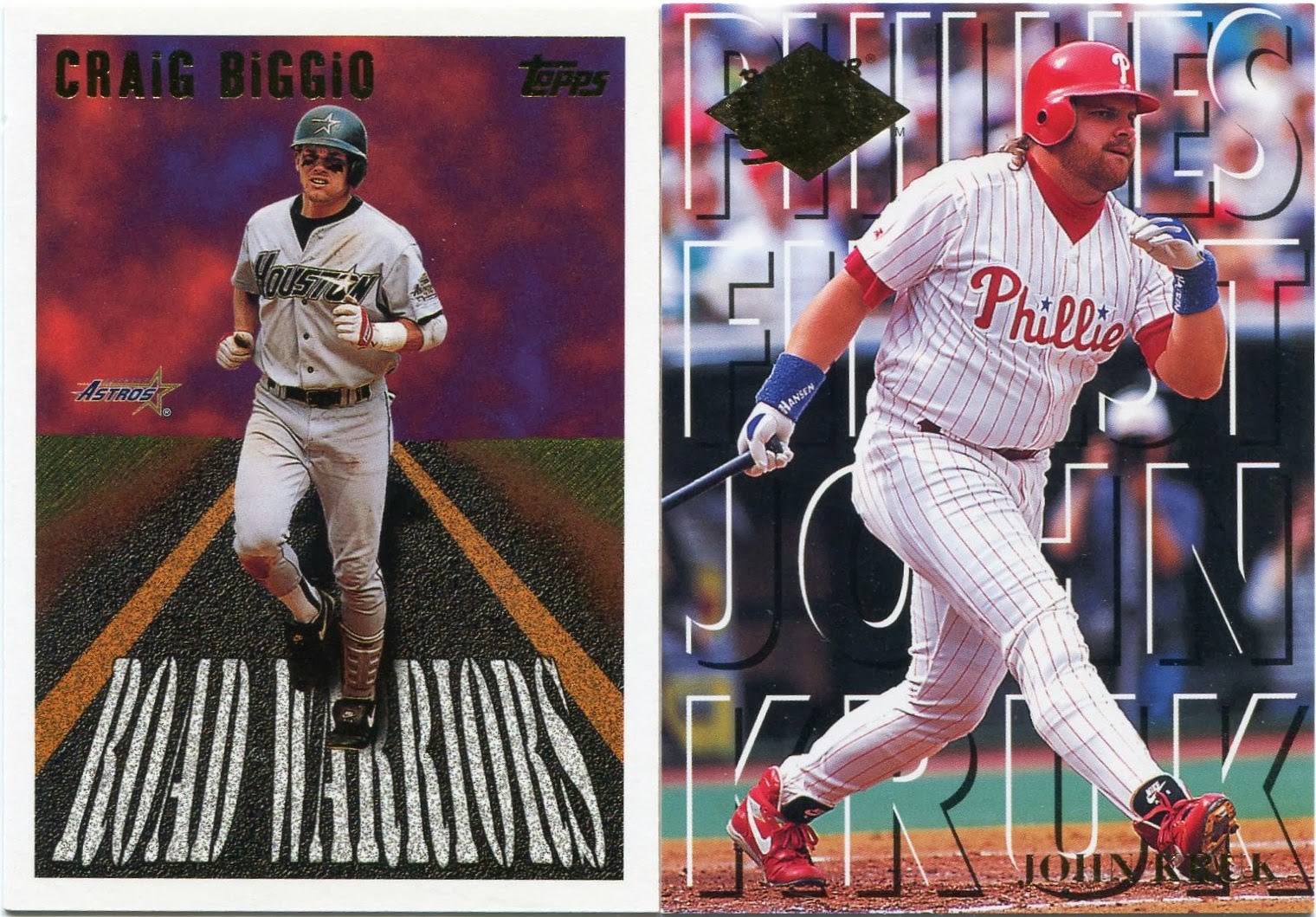 The repack gods can be quite generous in this regard. Designs like these are about as '90s as it gets.

Yes, there is such a thing. Didn't you know that?

After seeing cards like these, I can't help but wonder how many more wacky insert sets are out there waiting to be discovered. 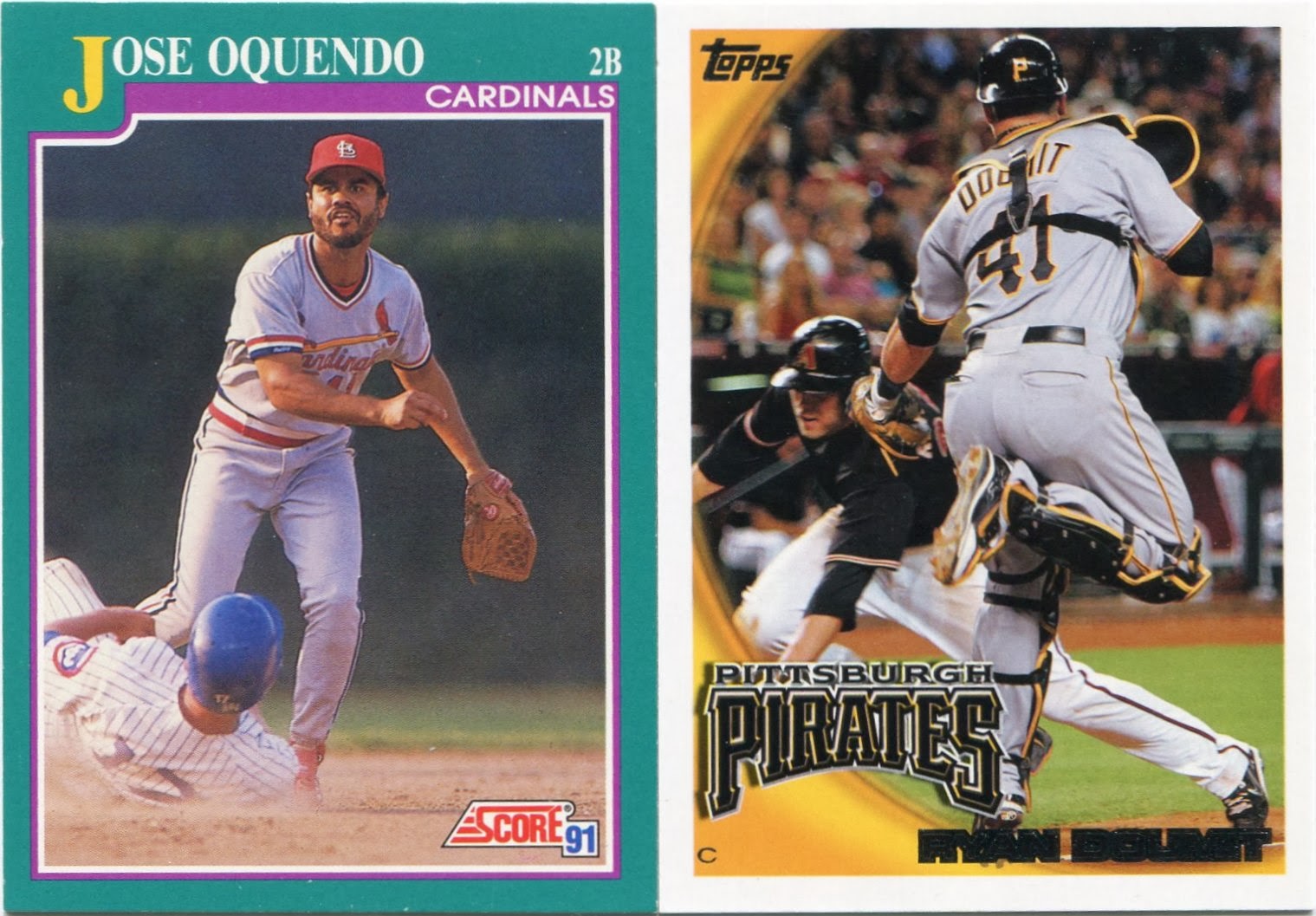 Repacks always seem to result in a few new mini-collection hits as well.

It's too long to explain. Basically, I collect any cards that feature double plays or plays at the plate. And a whole lot of other things. 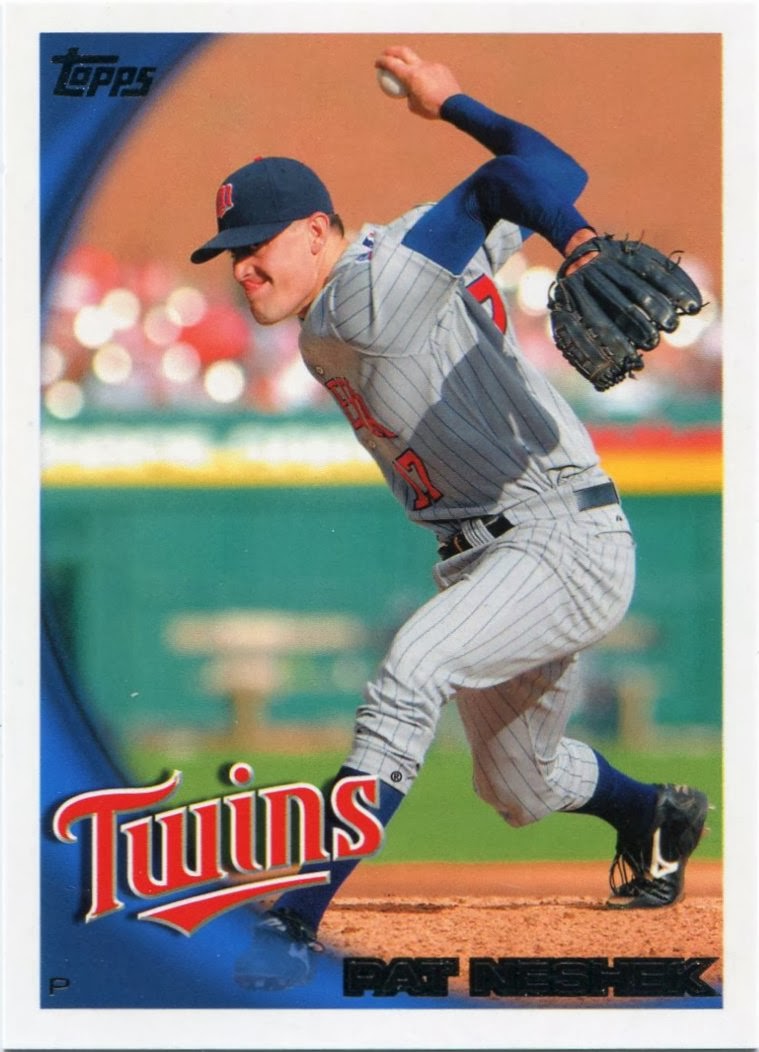 To me, the big thrill of a repack is knowing that you can never truly know what you'll find.

Maybe, just maybe, you'll find something for your team collections. Or perhaps one of your new player collections.

That's exactly what we have here with Mr. Neshek. In a move that was far overdue, I made him a "binder guy" not too long ago. And I somehow hadn't tracked down his 2010 Topps issue yet.

The repack gods were with me.

Again with the repack gods?

I already told you. 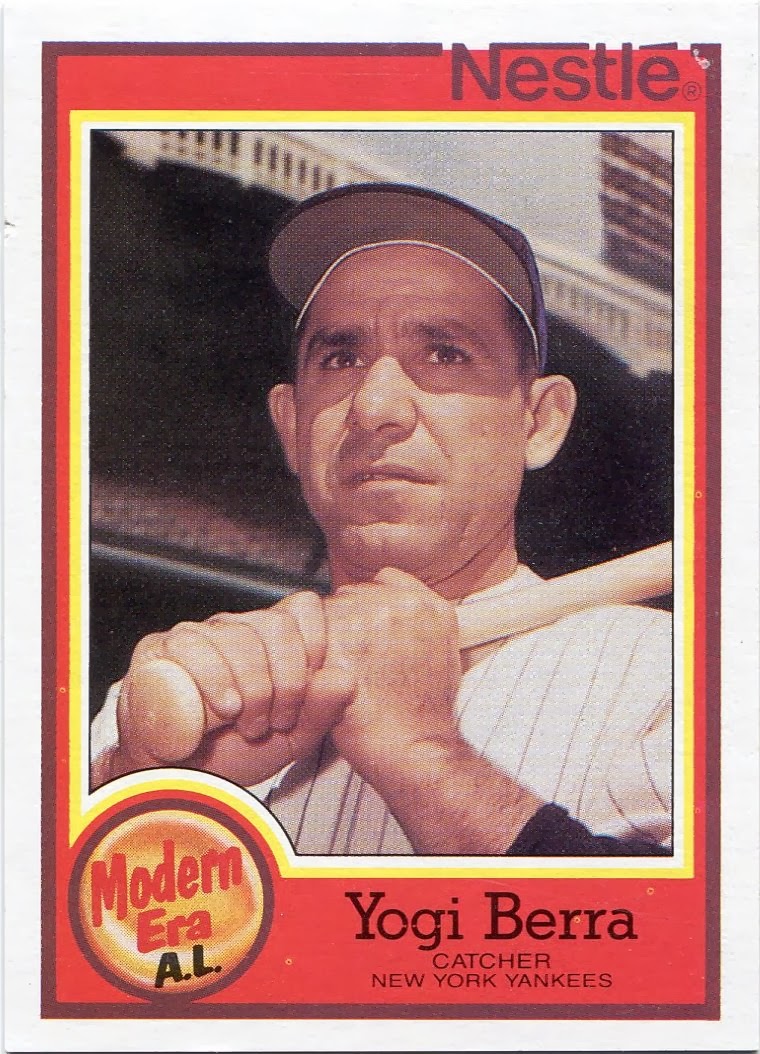 Did I mention how much I enjoyed oddballs?

I don't think I've told the group this yet, but I'm a Hall of Fame collector as well. You can imagine, then, how excited I was to pull this spectacular Yogi Berra, courtesy of the Nestle brand.

It's the perfect combination of Cooperstown and oddballs.

So, Nick, are you ready to tell us how much this addiction set you back last week?

Four dollars?! The other people here threw away thousands in the span of a few hours! One guy just opened a box of Five Star in the alley a few minutes ago! And all he has to show for it is a Shaun Marcum autograph!

Are you sure you belong here?

Repacks may be an addiction, but they're one I'm proud to have.

Brilliant! I sure wish such a help group existed, that's for sure. I think that Yogi was the gem of the lot. Though, I know what you mean about unexpectedly stumbling upon a card for your obscure player collection. Good stuff!

It's Definetly a addiction. Even if I don't buy anything I spend hours surfing eBay or comc

Clearly, the Repack Gods have turned their backs on me... You got far cooler stuff than I got in my last couple.

Cool post. "HI NICK!"
Yes the Repack Gods can be very generous sometimes. They were kind to me on one of my last repacks of a Fairfield 250 card Cube. http://captkirk42.blogspot.com/2013/12/a-fairfield-repack-250-card-cube.html
Although their cousins the New Pack Gods blessed me with a super sweet Jose Reyes "Captured on Canvas" in a pack of 2008 UD Masterpieces from that cube.

Don't look at me. I don't have a problem.

Oh, you saw all of those repack headers that I wrote notes on...?

Well... "problem" is a strong word. I prefer budgetarily challenged.