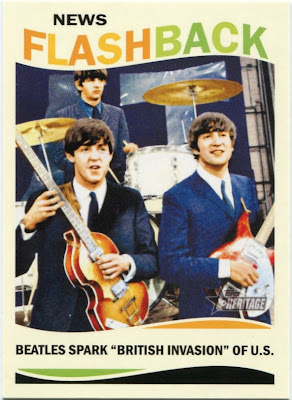 Tonight, we continue the end-of-year round of countdowns on this blog.

Earlier this week, I provided my rankings of the sets released during the course of 2013.

We'll be narrowing the focus a little more this evening. Much like I did last year, I'll be counting down the ten best cards 2013 had to offer.

There were a ton of terrific singles released this year. Narrowing the list down to just ten proved to be a much more difficult task than I'd originally thought.

Before we start, though, I should note the Beatles card you see above, one that was a part of this year's Heritage "News Flashbacks" insert series.

I've decided to nominate it as more of an "honorable mention" on this list, since trying to compare baseball and non-baseball subjects side by side is a nearly impossible task.

I can't justifiably rank a card of my co-favorte band (with the Ramones) amongst baseball players. It's apples and oranges, basically. But just know that the "Fabs" made for one of the better singles of the year. (Even with the sans-George photo.)

So, without further ado, here are my ten favorite cards from 2013. 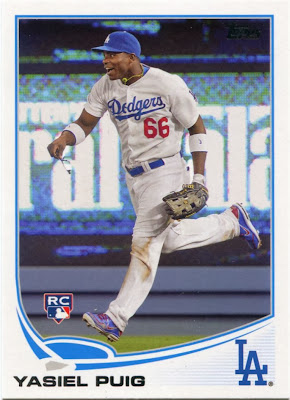 If there was a single face for MLB's 2013 season, it had to be Yasiel Puig.

"Puig-mania" seemed to take the baseball world by storm ever since his debut in early June. Not long thereafter, the dynamic outfielder almost singlehandedly managed to turn the Dodgers into a pennant contender after a slow start.

While I get why Puig might irritate some of the baseball "purists" out there, I'm a huge fan of his. I look forward to seeing him in that Dodger outfield for years down the road.

Yes, Topps granting Puig three spots in their Update checklist was massive overkill on their part. But, while the other two may have been filler, there's little doubt that they did a terrific job with his actual rookie card.

To me, the pure enthusiasm seen in this shot pretty much sums up what "Puig-mania" was all about. 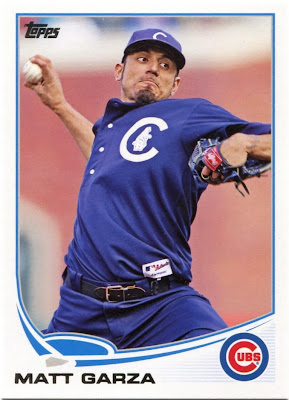 For one thing, I think the Cubs got a fantastic haul for him at the trade deadline last year. I'm especially fond of third base prospect Mike Olt, one of the players the North Siders landed in return for the hurler. Maybe it's wishful thinking, but I think the move will pay off in the long run.

Secondly, Garza was responsible for one of the better cards of the year with this spectacular Series 2 issue. It proved to be the best pull of a hanger box my dad generously bought me, one that proved to be amongst my better breaks of 2013.

For better or worse, the Cubs just don't wear throwbacks too often.

When one pops up on cardboard, it's bound to get my undivided attention. 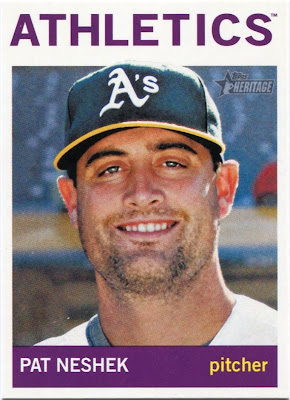 This was one of the bigger surprises of the year.

On the surface, nothing about this particular card stands out in any way. To some, it's your standard Heritage mugshot of some middle reliever.

To me, though, Pat Neshek is far from just "some pitcher". He's a fellow card collector. He's one of us.

Unfortunately, he and his wife had to suffer through an unspeakable tragedy during the A's magnificent playoff run in 2012.

After not receiving little attention around the hobby during the last few years, I was shocked to see Neshek's name pop up in this year's Heritage checklist. Heritage is usually reserved for stars and position players, not middle relievers.

I'm not sure if it was Topps's way of honoring Mr. Neshek or if it was just pure coincidence, but it was nice to see the sidewinding reliever in a big checklist for once.

He ended up having a more action-filled spot in the Update checklist, but it's Pat Neshek's Heritage issue that will always stand out to me. 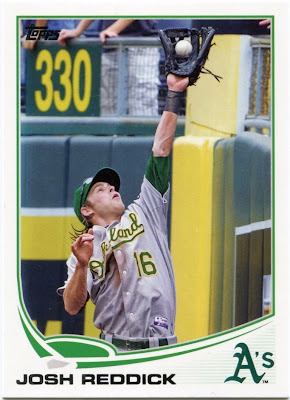 I knew Josh Reddick would be in the "Card of the Year" running since day one.

I was lucky enough to pull this one from my initial 2013 Topps breaks way back in January. It was right after I found out that Reddick and I shared a February 19th birthday.

While the A's outfielder had a bit of a down year in 2013, he sure received one legendary card in this year's Flagship checklist. I'm sure you've already seen this tremendous grab around the blogs at some point. 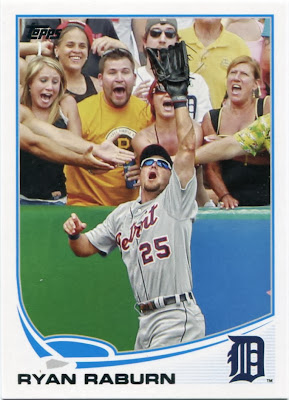 To me, Ryan Raburn just edges out Mr. Reddick in that department.

This was one of the first 2013 cards I saw, as Topps released it as one of their preview images in the days leading up to Flagship's release. From that point on, I was determined to land myself a copy.

Thankfully, I didn't have to wait long. I managed to pull one from those aforementioned Flagship breaks in January. The shockingly consistent looks on the fans behind the Tiger outfielder makes this one of the best "at the wall" shots ever produced.

In case you were wondering, this outstanding photo comes from a Tigers-Pirates contest on June 24th, 2012. Raburn managed to snag this eighth inning fly ball off the bat of Josh Harrison.

At card #330, this magnificent piece capped off the Series 1 checklist.

Quite a way to end it, Topps. 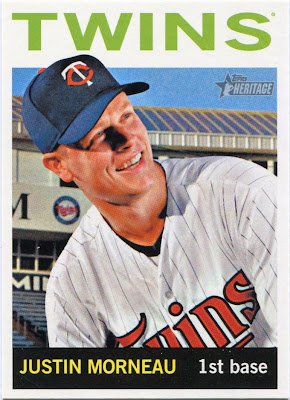 I'm going to be honest with you.

I can't figure out exactly why I love this card so much. While I've long been a Justin Morneau fan, he's never been among the top tier of my player collections or anything.

I just don't know. I think some of it has to do with the fact that this shot reminds me of an authentic 1964 Topps card for some reason, more so than any other 2013 Heritage issue did.

The stadium backdrop is nice, too. That sure looks like a spring training facility to me (as opposed to Target Field), but I could be wrong.

Simply put, I simply can't put my finger on why Morneau snuck his way into my top ten of the year, much less into the #5 slot.

That's part of the beauty of baseball cards, though.

Not everything needs an explanation. 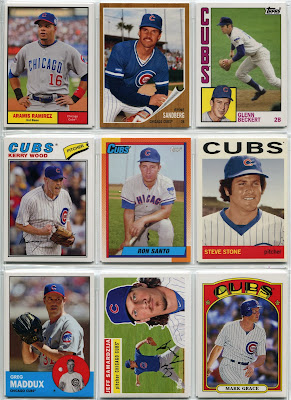 When Topps announced its plans to give away cards at a few select Cubs home games this year, I was ecstatic. For a card collector like myself, it was a must-have set.

Four different 20-card Archives sets were given away at four games at Wrigley in 2013. I knew coming away with all four would be nearly impossible, given the prices Cubs tickets can command at times.

In the end, I managed to get two of the four sets. My dad battled some pretty bad weather to get his hands on the first one for me.

Thankfully, we were able to nab the second one while taking in a beautiful day at Wrigley in July. (Not surprisingly, the Cubs lost to the Pirates that afternoon.)

Topps managed to incorporate quite a few of their past designs in this set. It impressed me a whole lot more than their standard Archives release did, I'll tell you that.

Plus, with the likes of Glenn Beckert, Steve Stone, and Mark Grace, the set included a few names you don't see too often in this hobby.

I hope other stadiums get on the bandwagon with promotions like these next year.

It's a good way to put butts in the seats. 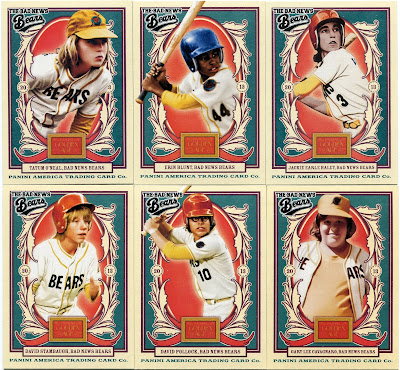 Any one of these Bad News Bears singles could've landed a spot on this list. But I just couldn't separate any from the herd.

So, as a result, I decided to make all of them a part of this countdown.

I've said on record that Panini's decision to include these in their Golden Age checklist was the single greatest innovation any card company had in 2013. After all, The Bad News Bears is easily one of the greatest baseball movies ever made.

I can only hope Panini brings these back next year. 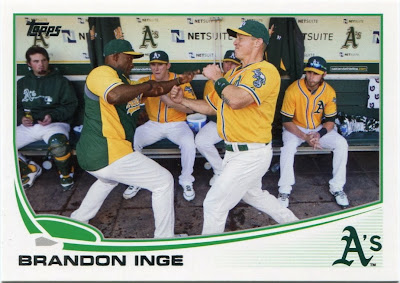 Only now am I realizing that Brandon Inge is the third Oakland A to make this countdown.

I guess the franchise just had a knack for cardboard this year.

Like aforementioned Athletic Josh Reddick (who makes a cameo on this card), Brandon Inge didn't have a great year in 2013. After a bit of a surge with the 2012 A's, the third baseman hit just .181 in 50 games with the Pirates this year before being released in August.

While he would receive a card in Update, it's Inge's standard Flagship issue that grabbed most of the headlines around collecting circles.

Since I'm all for goofy shots on cardboard, it's only natural that this card would rank so highly on this list. It's almost like a throwback to the fun-filled photography of the mid '90s.

While a few of his apathetic A's teammates look on, Inge is seen here playfully scrapping with what looks to be an Oakland coach. Shots like these are usually relegated to dreaded short-prints or super-short-prints these days.

In any other year, Inge may well have won the top slot on a list like this. 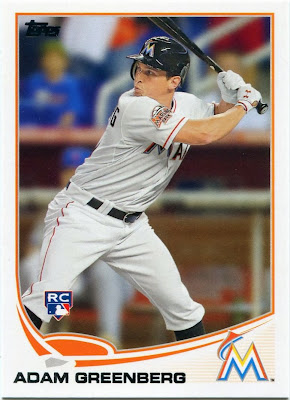 I've been hailing this one as the "Card of the Year" from the very beginning.

Ever since I pulled it from a fateful Series 1 blaster back in January, I knew it would reappear at the top of this list come December.

Here we are. And here it is.

In case you forgot, Adam Greenberg suffered a horrific beaning in his very first big league at-bat with the Cubs in 2005. For a long time, it looked like it would be the only shot he'd get at the big time.

But, thanks to a nationwide campaign, Greenberg was able to sign a one-day contract with the Marlins last year. On October 2nd, 2012, he made his long-awaited return to the big leagues. He'd strike out in a pinch-hit appearance against R.A. Dickey, but that didn't matter much.

The fact that he was able to return at all made for one of the best feel-good stories I've ever witnessed.

Topps did their part in honoring Greenberg as well, granting him a slot in their Flagship checklist this year.

I tip my cap to you, Topps.

Adam Greenberg is my pick for 2013's "Card of the Year". Like I said, it was never really a contest in my mind.

I doubt we'll ever see another card quite like it.
Posted by Nick at 6:31 PM

Good choices! I would nominate Teddy Kremer's card as well - it fits in the same vein as the Greenberg (unfortunately, Kremer's card is a SP and I'll probably never own it).

I managed to get all but three base cards from Topps series one through packs... and Greenberg (CARD OF THE YEAR!) was one of them. Figures.

I need to get those Bad News Bears singles. I loved that movie when I was a kid.

Engleberg, did you eat my hamburger?

Do you like baseball playing? Do you know the top 10 baseball players of the world for all time? Let us know it.