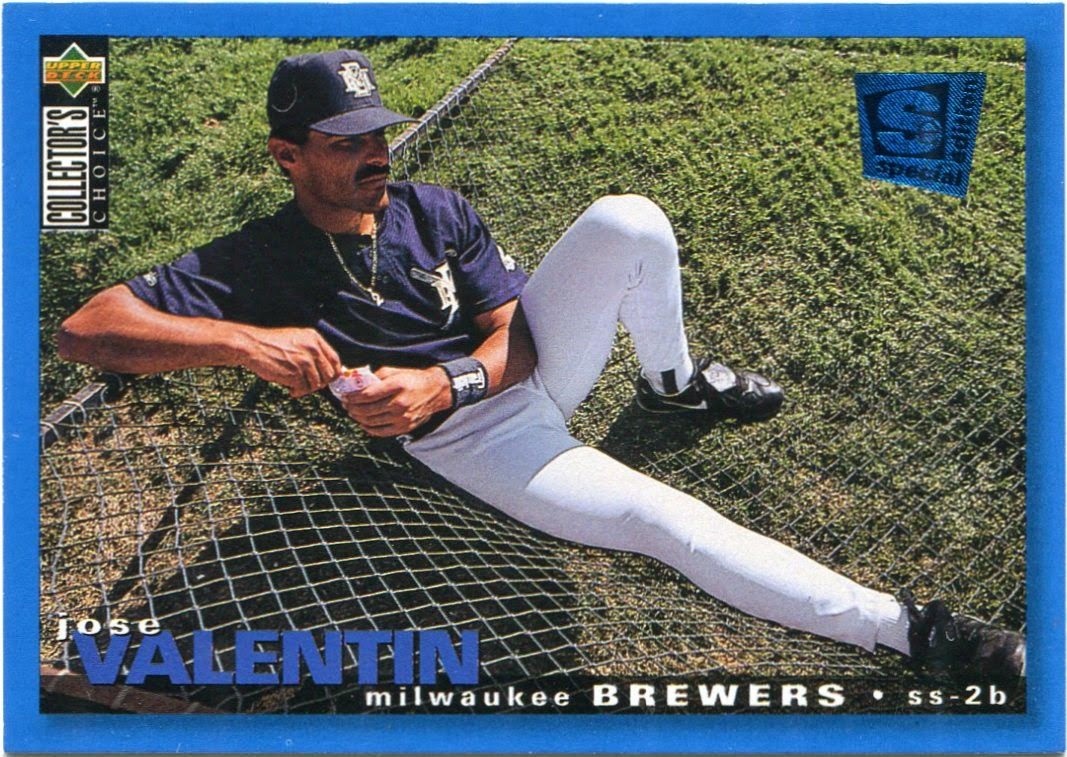 Before I started this blog, I was pretty selfish when it came to card shows.

Digging through boxes upon boxes of cardboard was fun, of course, but I only shopped for myself. I didn't give a minute of thought to picking up anything for other people.

Nowadays, I can't imagine a show without a little proxy shopping. Though I still get my fill of keeper cards, I'm constantly on the hunt for others. I get a great deal of pleasure finding something I know another blogger will enjoy.

Heck, I've even tried to bring the entire local card show experience to Ethan, a blogging buddy who lives halfway across the country.

Recently, though, I was on the receiving end of some proxy shopping. When Jim (aka "gcrl"), longtime friend of the blog and author of the terrific "Garvey Cey Russell Lopes", offered to go hunting for others at his local show, I specifically asked if he could look for a couple cards for me.

As luck would have it, he found them both. Although sending just the pair would've been more than enough, Jim generously decided to build a whole trade package around them.

For now, then, we'll save the two proxy hits for last and focus on the rest of the goodies Jim sent my way.

I can see why he included this Valentin in the mix. It's a quirky piece that fits well into my random ways.

I don't have a good explanation as to how a shot like that wound up on a baseball card, though. 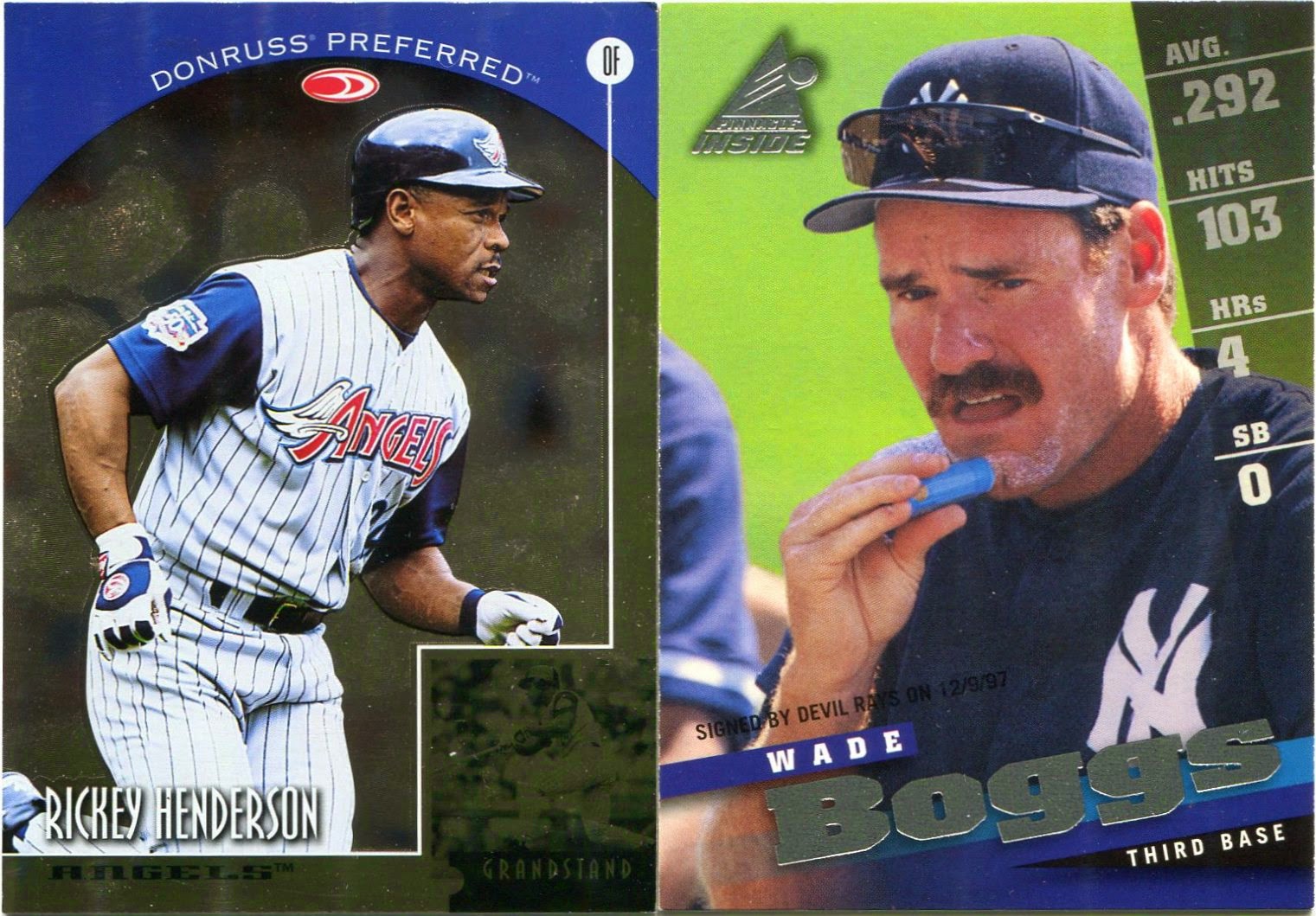 I think I may actually have requested the Henderson when he posted it on his blog a while ago. It's an unofficial quest of mine to own every single card of Rickey in Angels gear. I never knew that Donruss Preferred one existed before Jim came along.

Pinnacle Inside may not have made much of a splash, but they can lay claim to producing the only sunblock-themed card I've ever seen. 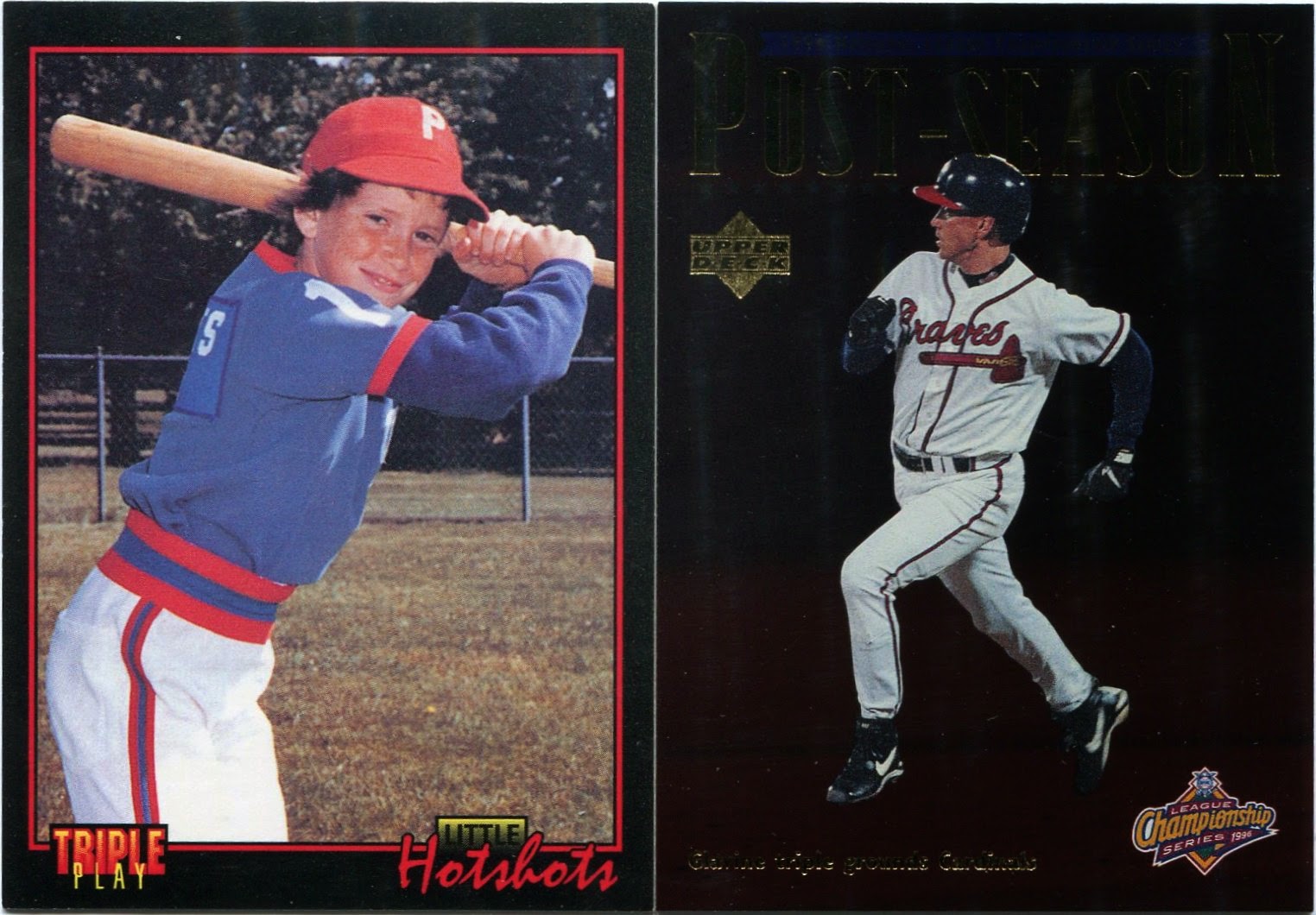 These are both Tom Glavine cards, believe it or not.

The one on the left comes from 1993 Triple Play's "Little Hotshots" subset. It's always fun to see cards of future stars as little tykes.

On the right is yet another unconventional card of Mr. Glavine, as it features him legging out a bases-loaded triple in Game 7 of the '96 NLCS. He also threw seven innings of shutout baseball in that contest. 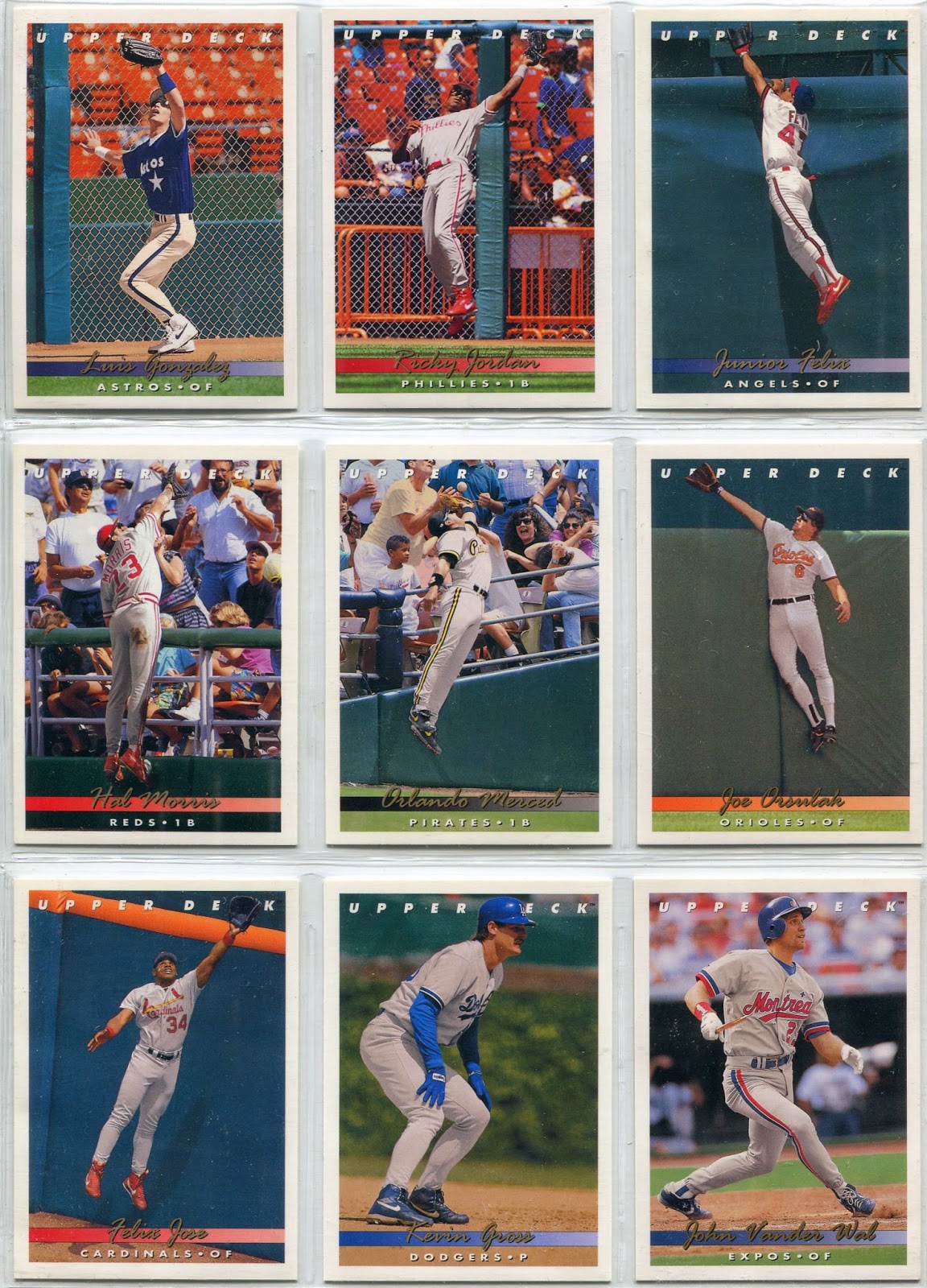 Maybe this fantabulous page will help convince you. All of these were a part of Jim's trade package.

As if that weren't enough, the nine-pocket page that these are housed in also came courtesy of Jim. He graciously threw in a few extra pages he had lying around.

For binder guys like me, Rule #1 is pretty simple.

You can never have too many pages. 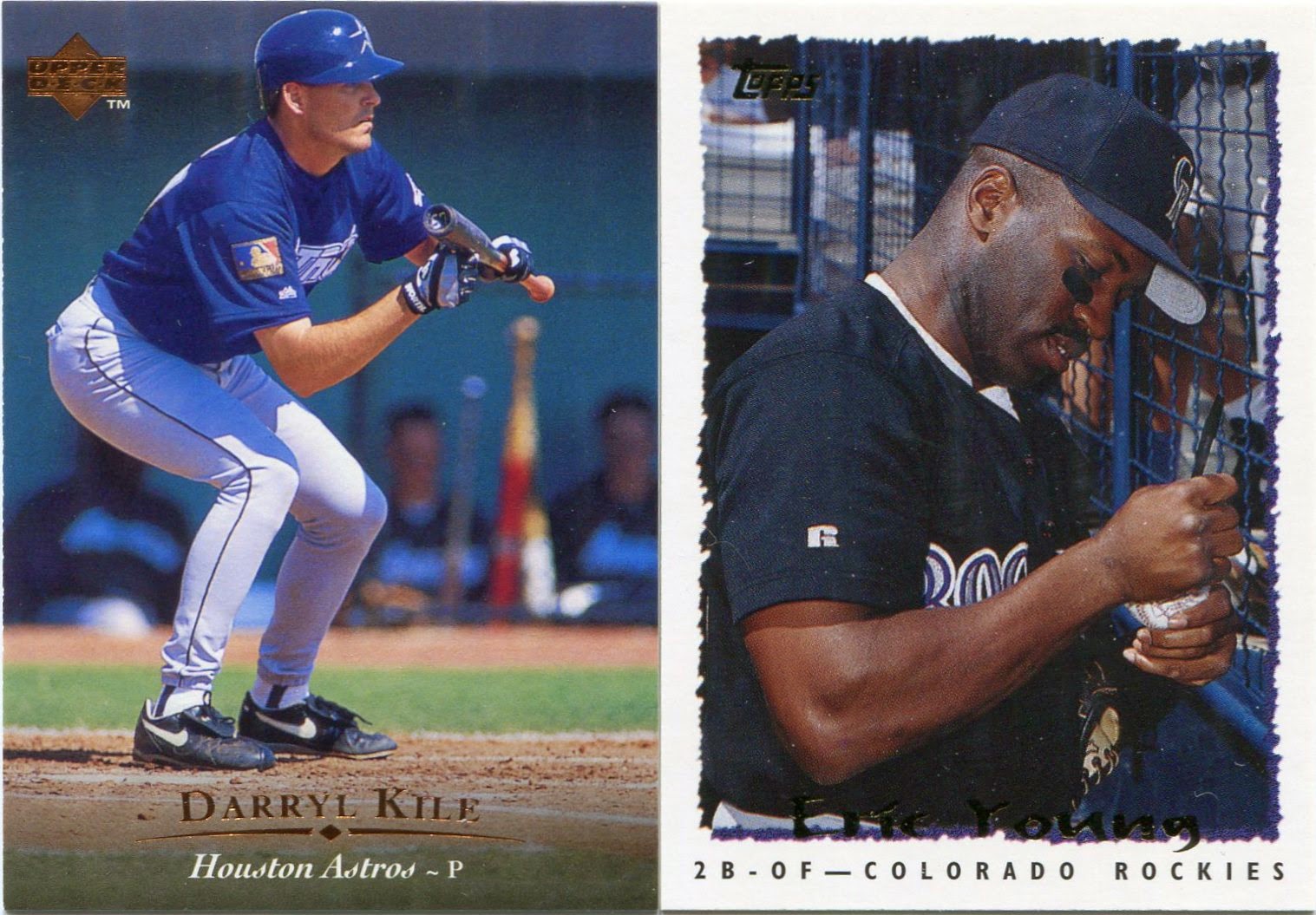 As has become apparent from past packages, Jim is a legend at hitting mini-collection needs.

Both of these fit nicely into my "pitcher at the plate" and "autograph" themes. The Kile is probably about the 2,748th card of his that I've received as a blogger.

Except for maybe Vlad, Darryl Kile has been the most common suspect in trade packages during my time here in the blogosphere. I mentioned my Kile collection in passing once and people have been showering me with his cards ever since. 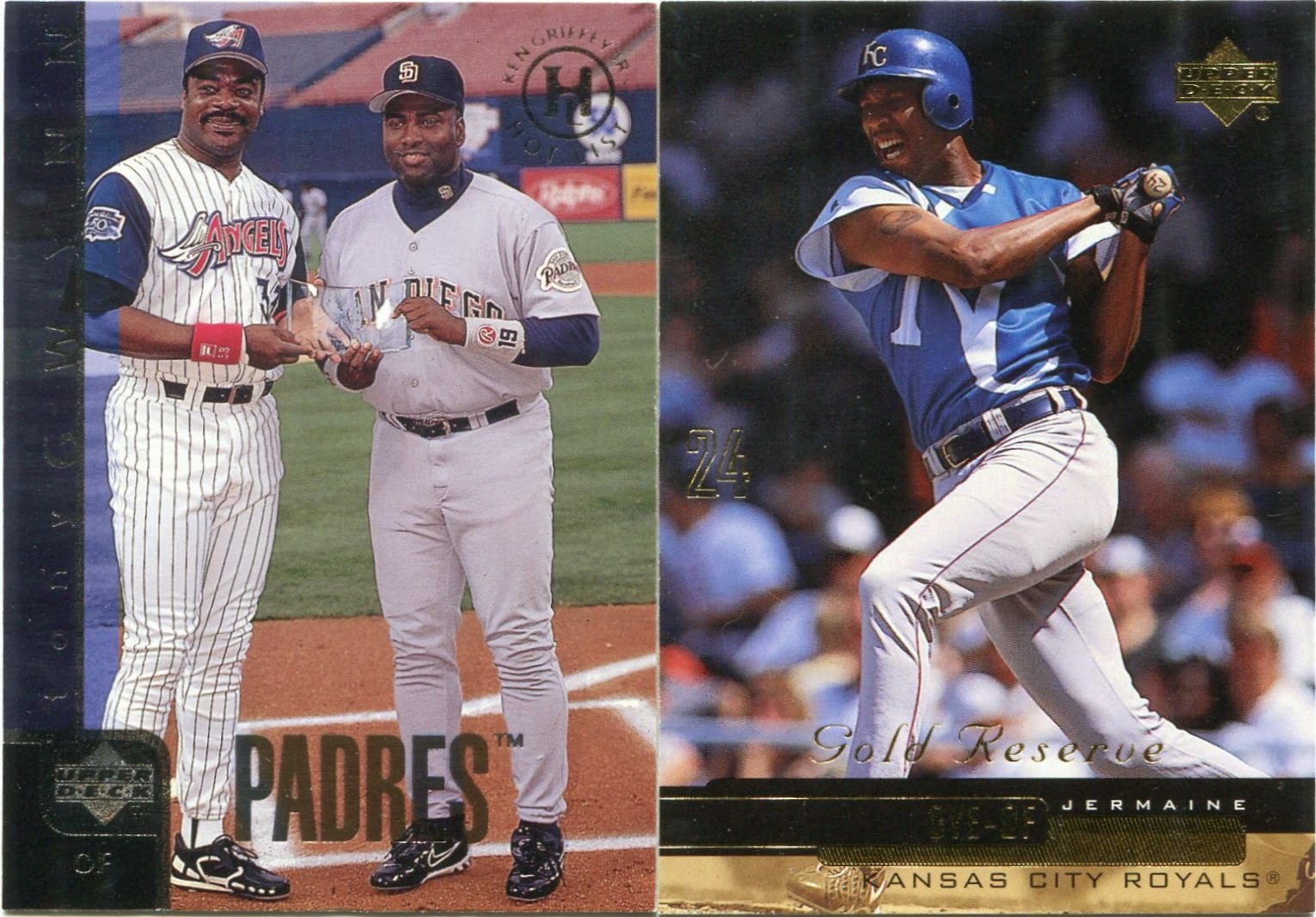 Also present were a couple hits to my "award show" and "turn ahead the clock" mini-collections.

The Gwynn/Murray combo certainly makes for one of the more star-studded cards in history.

Jim sent along the Gold Reserve parallel of Jermaine Dye's 2000 UD issue. I picked up the base version in a Just Commons order not long ago.

My apologies go out to those who said they never wanted to see those awful Royals jerseys again. 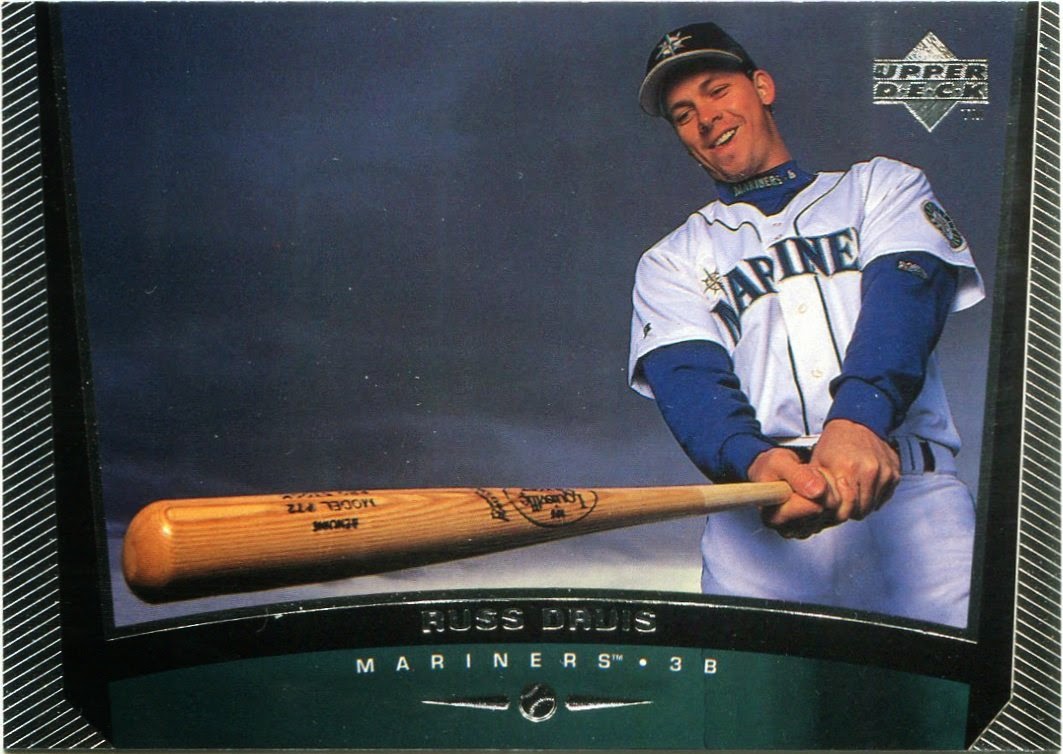 Now that is a "bat barrel" shot.

What a thing of beauty. 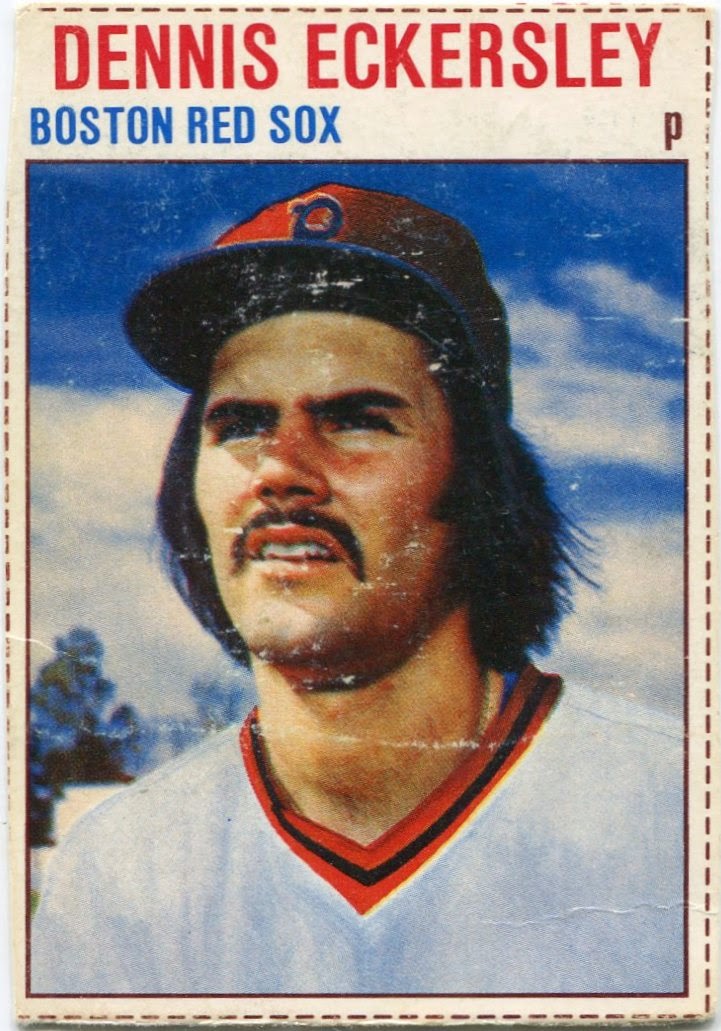 Despite the laughable airbrush job on "Eck" here, seeing a Hostess card fall out of a trade package was quite exciting.

Between this beauty and that massive Hostess binder I picked through at my local show, I've certainly had my fill of candy-coated cardboard lately.

I couldn't be happier. 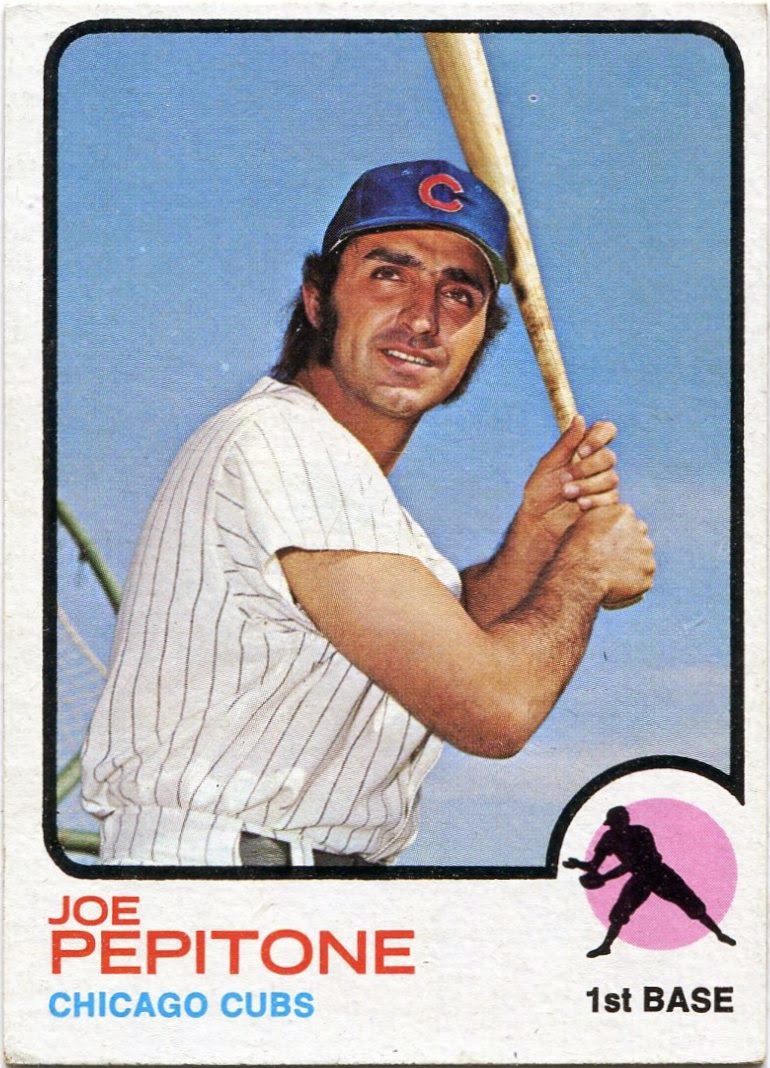 As great as the other items were, the two best cards from Jim's mailer were the proxy pickups he found for me.

Both have quite a bit in common. Perhaps most importantly, both were cards I'd coveted for a long time.

Mr. Pepitone here was the first of the pair. The 2001 Topps Archives reprint of this very card had been staring up at me from my Cubs binder for what seems like forever.

Though he closed out his career with the Cubs and Braves in 1973, Topps didn't issue a card of him the next year.

As a result, this semi-high number from '73 Topps is indeed Joe Pepitone's "sunset" issue.

Or, as Jim would fittingly say, his "final tribute". 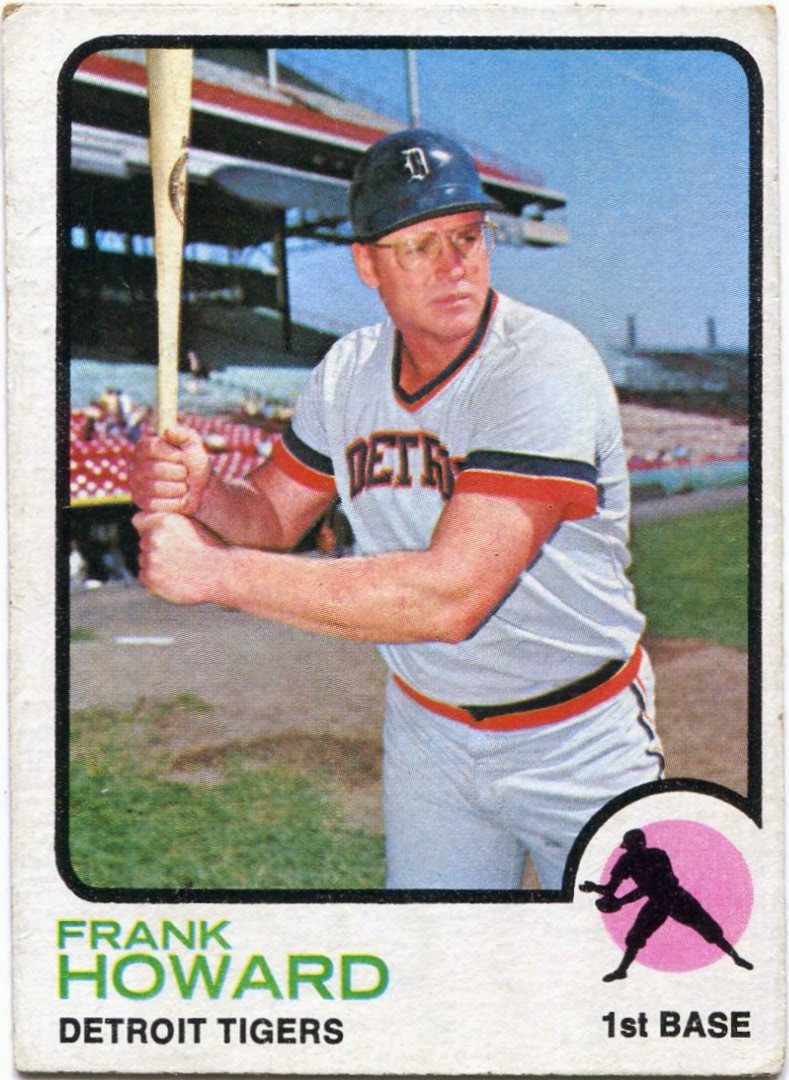 The same can be said about this great piece.

Like the Pepitone, the 2001 Archives reprint of Frank Howard had been mocking me from my Tigers binder for years. As another semi-high number from '73 Topps, I had yet to track down an actual copy.

Also similar to Mr. Pepitone, "Hondo" did play in the bigs during the 1973 season, yet didn't have a card issued the next year. That, of course, makes it another "sunset" piece. On top of that, it's the only card I know of that pictures him with the Tigers.

Howard's tenure in Japan makes for one of the more interesting anecdotes in the annals of baseball history.

After not receiving an offer to play in the bigs after the '73 season, he went across the Pacific to play for the Taiheiyo Club Tigers of the Japanese league. In his very first at-bat in Japan, he struck out, wrenched his back, and never played professional baseball again.

Needless to say, it was a rather inauspicious end to Frank Howard's career.

For years, I've been dreaming of the day I could own the real versions of these two cards. Thanks to Jim, that moment has finally come.

I just didn't think I'd add them to my collection on the same day.

That's another testament to the joys of proxy shopping, though.

If you're not doing it already, I highly recommend adding it to your next card show experience.
Posted by Nick at 5:25 PM

'73 is a quietly awesome set, and those two sunsets are fab. Nice proxy haul.

Speaking of which, the Second Dime Box Card Show arrived today. I step through the imaginary doors tonight. No entry fee, no crowds... can't wait! Thanks, Nick.

I've been asking a certain blogger in upper New York to proxy shop a Bill Virdon Syracuse Chiefs card for a while now. Still no luck.

thanks for the kind words. it really does make the card show even more fun when i'm looking for cards for others.