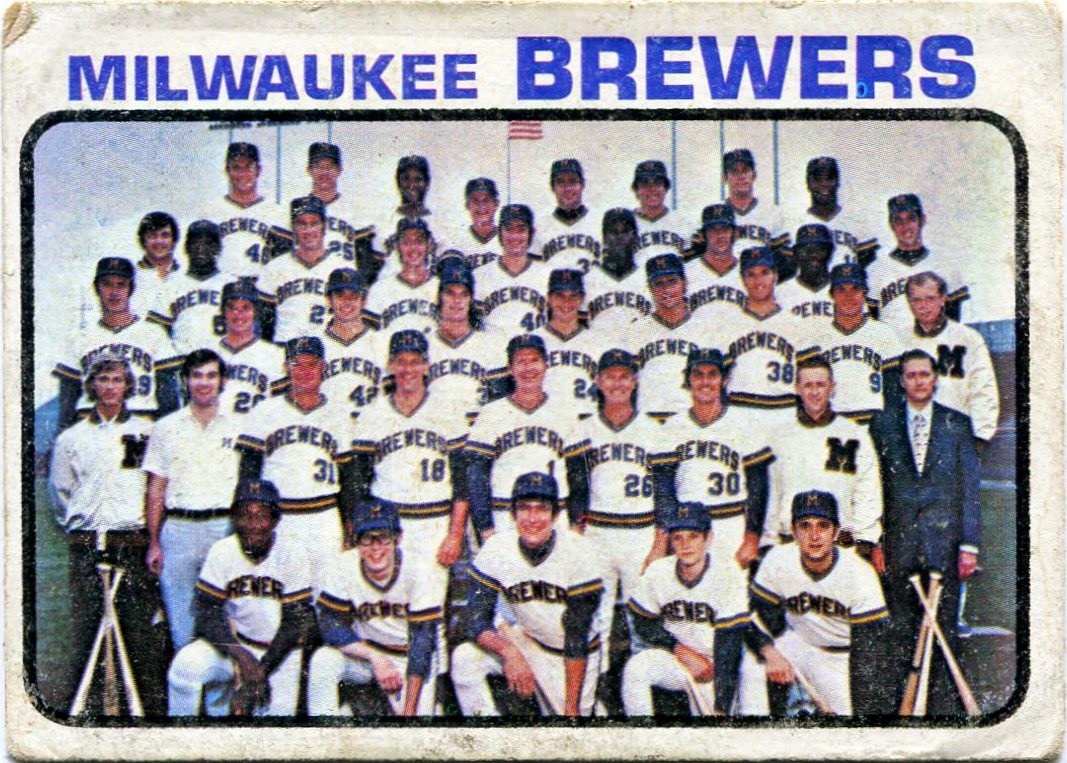 I think today's era of baseball fans can be separated into two distinct categories.

There are those who exclusively remember the Milwaukee Brewers as an American League franchise. The idea of the Brewers as an AL club continues to flabbergast these people. As you might guess, these are the ones that tend to have a few years on me.

Then, there are the fans that equate the Brewers with the National League without much of a second thought. Seeing as how the Brew Crew moved to the NL when I was five years old, I'm obviously a part of this group.

I grew up with the Brewers and Cubs constantly facing each other in fierce NL Central battles. The contests aren't quite as fierce these days, but I still catch quite a few Brewers-Cubs games every year.

Plus, along with the old Busch Stadium in St. Louis, Miller Park is the one of two ballparks I've been to outside of Chicago. I must say, it's one of the more shockingly nice palaces in all of baseball. If you're relatively near Milwaukee, I'd recommend catching a game up there.

I've always had somewhat of a soft spot for the Brewers because of their ties to the old Pilots franchise. Some car dealer named Bud Selig bought the team from Seattle and moved it to Milwaukee in 1970.

While the team has yet to win a World Series, they've built a respectable "Short Term Stops" roster along the way. 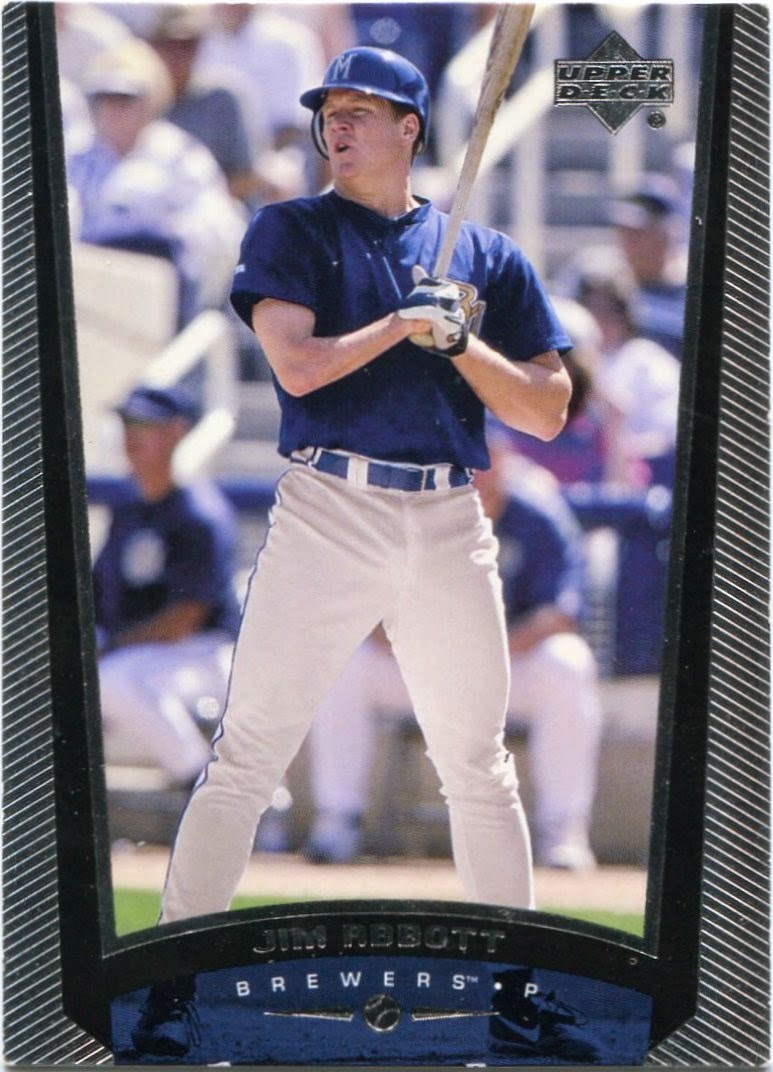 After successful stints with the Angels and Yankees, Jim Abbott went a forgettable 2-8 with a 6.91 for the 1999 Brewers before retiring in July of that year.

What makes his stint in Milwaukee notable, however, is that it was the only one he spent with a National League franchise. Which, of course, meant that he had to hit for the first time in his career.

Abbott collected two hits in 21 at-bats (with a pair of RBIs) that year, which is remarkable considering he was born without a right hand.

This is one of just two cards I own of Abbott as a Brewer, and I've had it for as long as I can remember.

It's always been one of the centerpieces of my collection. 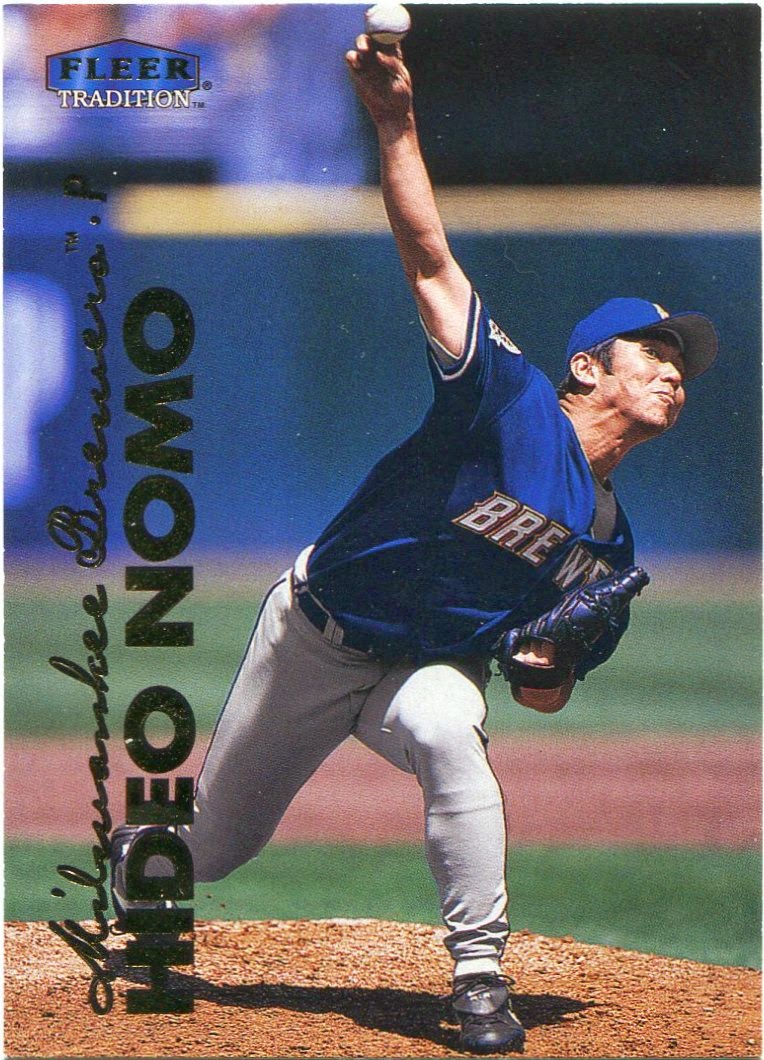 Mr. Nomo joins Jim Abbott as a fellow '99 Brewer on this roster.

Most fans prefer to remember Hideo Nomo for the "Nomo-mania" he brought to the league in 1995. What most forget, however, is that he fell on some pretty tough times just a few years later.

In a five-year stretch between 1998 and 2002, Nomo changed teams six times. After splitting his '98 season between the Dodgers and Mets, he latched on with the Brewers in 1999. He had a respectable season, going 12-8 with a 4.54 ERA for Milwaukee.

I wouldn't be surprised if he made a few other "Short Term Stops" rosters down the road. 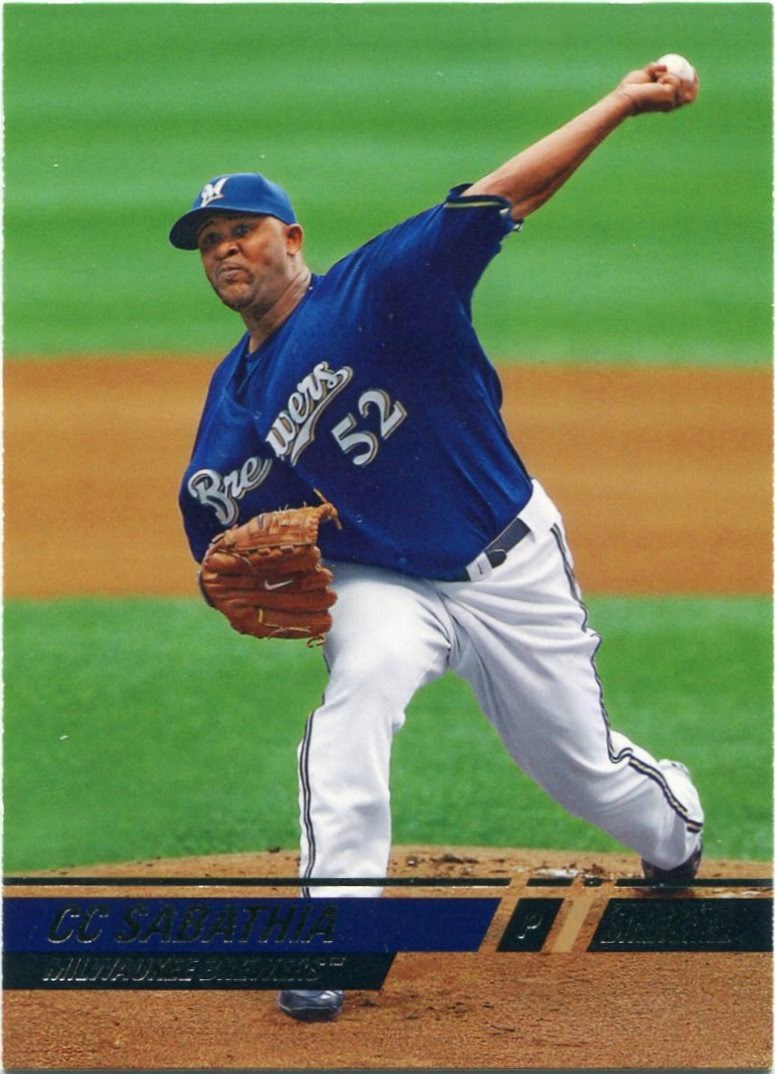 This stellar rotation closes out with one of the more memorable "Short Term Stops" candidates in recent years.

In the biggest trade deadline swap of the 2008 season, the playoff-contending Brewers landed C.C. Sabathia from the Indians for a few prospects. In hindsight, it was a trade for the ages.

I remember Sabathia's 2008 stretch run well. He went 11-2 with an amazing 1.65 ERA in 17 games with the Brew Crew. He completed seven of those games and tossed three shutouts as well, leading the Brewers into the playoffs.

Unfortunately, he struggled in his only postseason start that year, losing Game 2 of the NLDS to the Phillies. The Brewers would fall to the eventual world champs three games to one.

Still, I'd bet most Brewers fans are proud of the swap to this day. 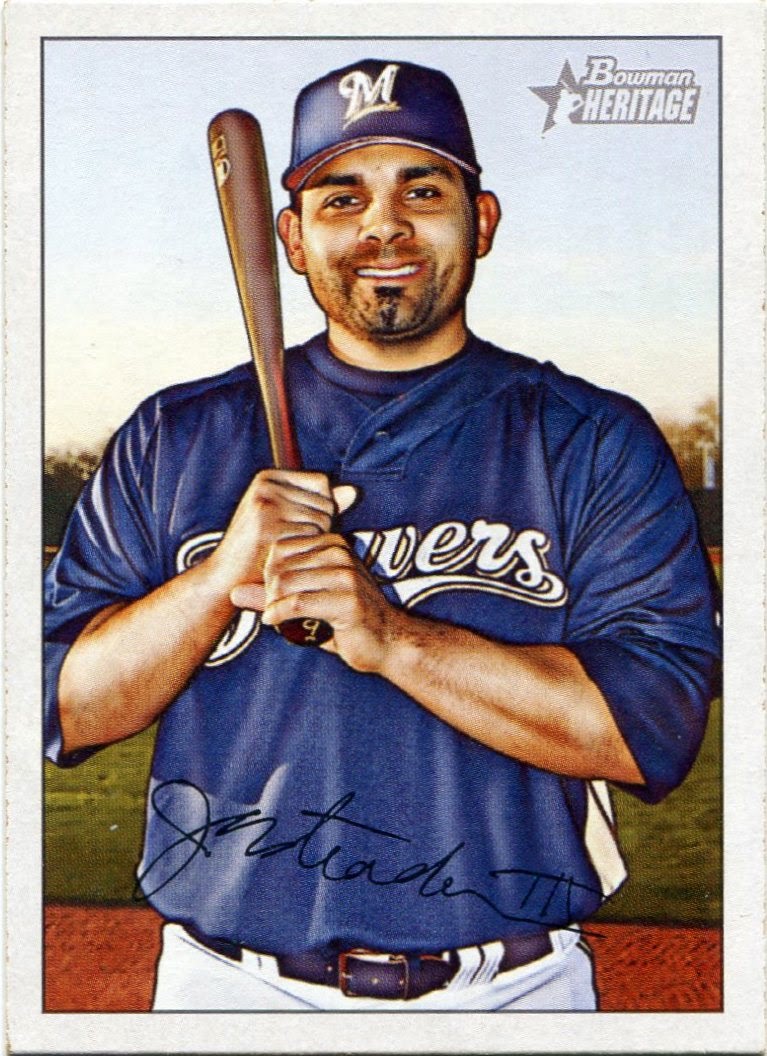 I can't say I'd blame you if you don't. He had a few good years with the Braves before toiling in relative mediocrity for the rest of his career.

He'd hang up his cleats after 23 games with the Nationals the following year.

That's really all I have to say about Johnny Estrada. This is basically a spot where I didn't have a whole lot of great nominees.

Still, it gives me an opportunity to mention that I may be the only person in the world who collects Travis Ishikawa. I honestly couldn't tell you why I'm a fan of this guy, but that doesn't stop me from hoarding his cards.

Ishikawa hit .257 with four dingers in 94 games with the 2012 Brewers. He played all of seven games in the bigs last year, by the way. Six with the Orioles, one with the Yankees.

Oh, and here's something you might not have noticed. Ishikawa was the starting first baseman for this year's Pirates on Opening Day. He went two-for-three on Monday, which means he's currently hitting at a .667 clip.

I'd wait a while before adding him to your fantasy team, though. 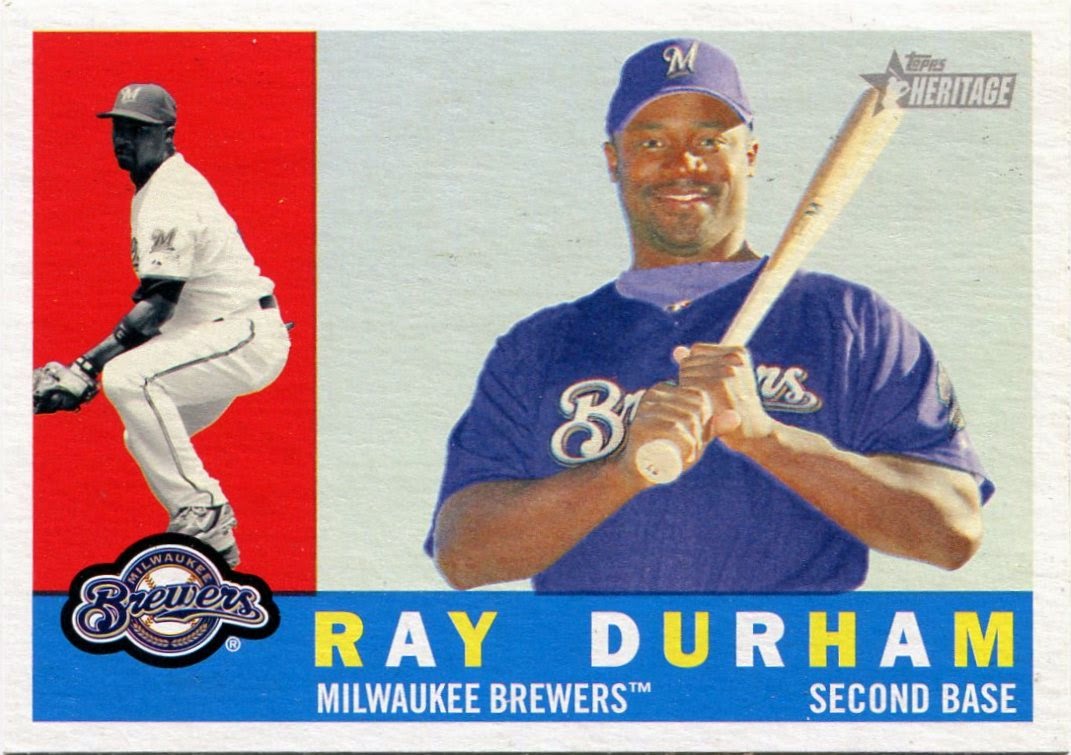 I kind of wrote off Ray Durham as an afterthought when composing this roster.

It took me a while to realize just how great of a "Short Term Stops" candidate he was.

For one thing, I don't remember his tenure with the Brewers at all. On top of that, he has the hallowed "half-year" and "sunset" combo. Just thirteen days after the big Sabathia deal, Milwaukee picked Durham up as a little insurance for their playoff hunt.

The swap proved to be another success for the Brewers, as he hit .280 with a sparking .369 OBP down the stretch. Unfortunately, he also struggled in the playoffs, hitting just .125 in three games against the Phillies in the NLDS.

Durham would call it quits following the 2008 season. In what was possibly the last truly exciting Heritage release until this year's '65-mania, Topps sent him out in fine fashion on the 1960 design.

Part 2 will be coming your way later tonight.
Posted by Nick at 1:30 PM

Great post Nick, from this Brewers fan that remembers the Brewers in the AL and County Stadium well. As a matter of fact I finally got to see my first game at Miller Park ever, since I moved up to Alaska before it was built. And how did I not remember Abbott had been a Brewer but for a short time. And I remember that 2008 season when we picked up Sabathia, no regrets it was a great pick up for the team espcially since it was their best season in many many years, although I can forget all about Eric Gagne, it seemed like anytime I got to see a game he'd come in and blow it. And I really liked Travis Ishikawa, got him to sign a ball for me at Spring Training in 2012 and he signed a few cards for me TTM too. Might have to hunt down a few of those Abbott cards and see if he'll sign for me. Keep up the good work.

Nick, let me echo CB in loving this post. I too am a displaced Brewers fan, though I willingly got out of the cheese state to move to the South. I readily admit that I have a hard time thinking of Milwaukee as an NL team every so often, though with 15 years under the bridge it gets easier.

Keep up the great work on the short term stops, though. I will point out that a candidate for first base is tough since only 15 players have been the "starting" first basemen for Milwaukee in the teams 46 year history.