Tales of the unexplained 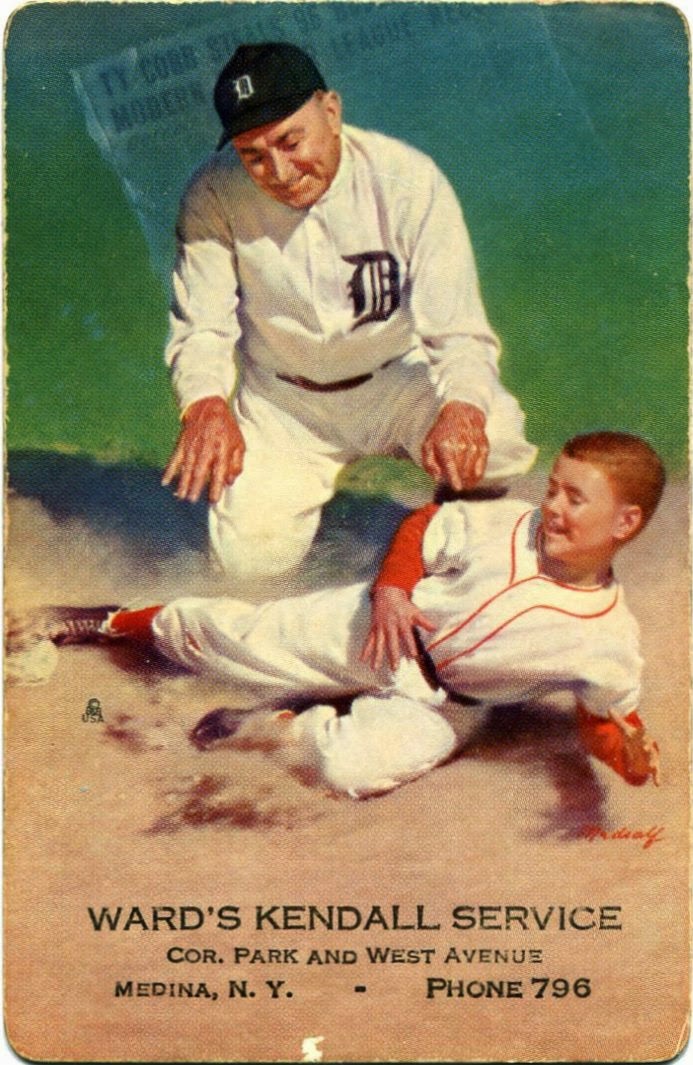 The world of baseball cards can be a mysterious place.

Despite my years of experience in the hobby, I know there's a lot left to be learned. Although my dime box travels have taught me well, I'm still constantly finding cards that leave me in the dark.

Take the Ty Cobb piece you see above, for instance. I snagged it from a dollar bin at a card show I recently attended without much of a second thought. It's a great oddball that needed to be in my collection.

There was just one problem.

I didn't know what the heck it was.

I said as much in the post I composed on my finds from the day. Extensive research still left me with nothing.

I guess I should've known that the great people of the blogosphere would help with the investigation. Thanks to the work of quite a few readers, I finally found the history behind Mr. Cobb. He hails from the playing card-based 1953 Brown and Bigelow checklist.

So, in short, I scored a 1953 Ty Cobb card for a dollar. I never would've known that without the help with a few kind-hearted souls here in the blogosphere. 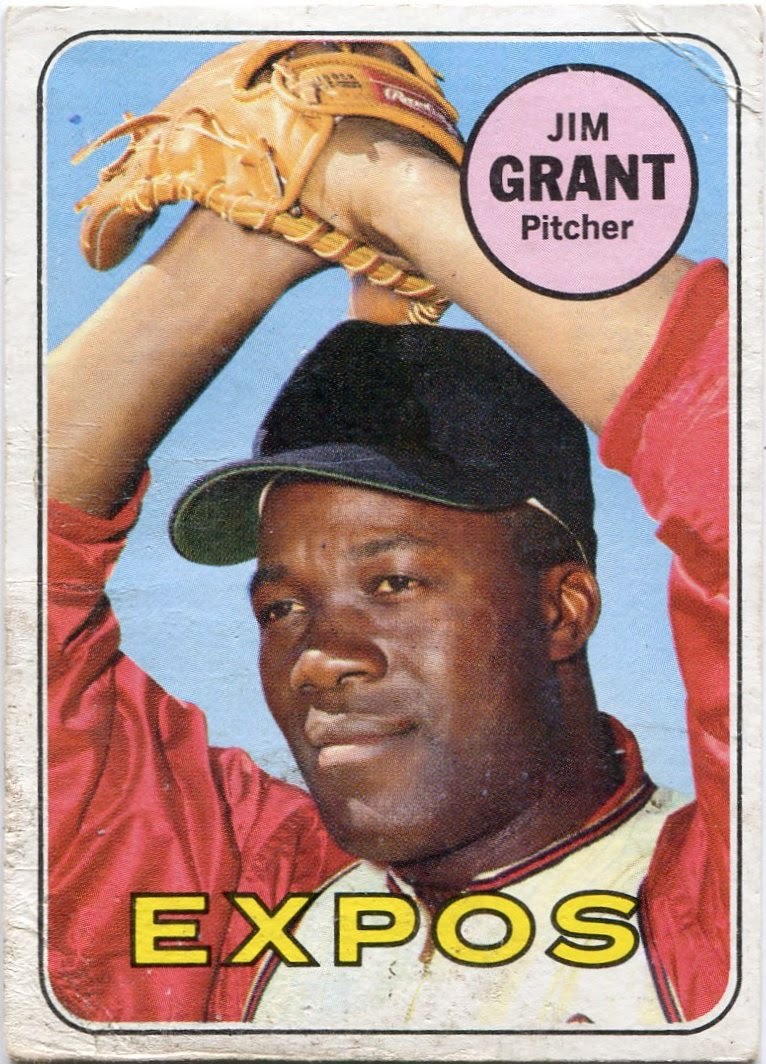 Like the Cobb, some tales of the unexplained ultimately end up with a resolution.

For years, I wondered why almost every shot from the 1969 Topps checklist seemed to be outdated.

Jim "Mudcat" Grant is one of the worst offenders. Though the card labels him as an Expo, he's clearly wearing Indians gear. And, since his last games with the Tribe came in 1964, this shot was at least five years old by the time '69 Topps hit the shelves.

As I recently found out, however, the up-and-coming players' union tried to get Topps to pay more for photo licensing rights at the time. As a result, they simply chose to use old pictures for many of the lower-numbered cards in the checklist. 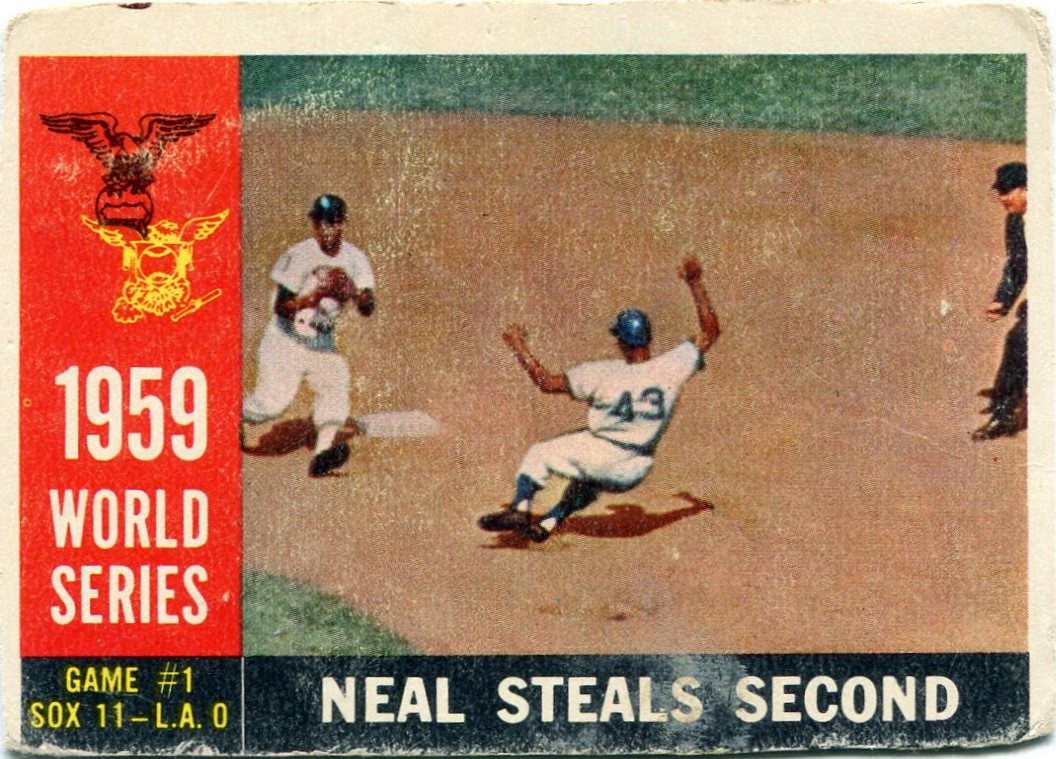 Some issues, however, will probably be mysteries forever.

Cards like this one are simply puzzling. Like the Cobb, I picked it up at the recent card show I attended a couple weeks ago for a quarter.

It's a terrific action shot of former Dodger Charlie Neal swiping second base in the '59 Fall Classic. That's why I bought it.

Still, take a look at the final score of this game. The Sox clubbed the Dodgers 11-0 in Game 1 of the series, yet Topps used a shot of a Dodger to highlight this particular contest. 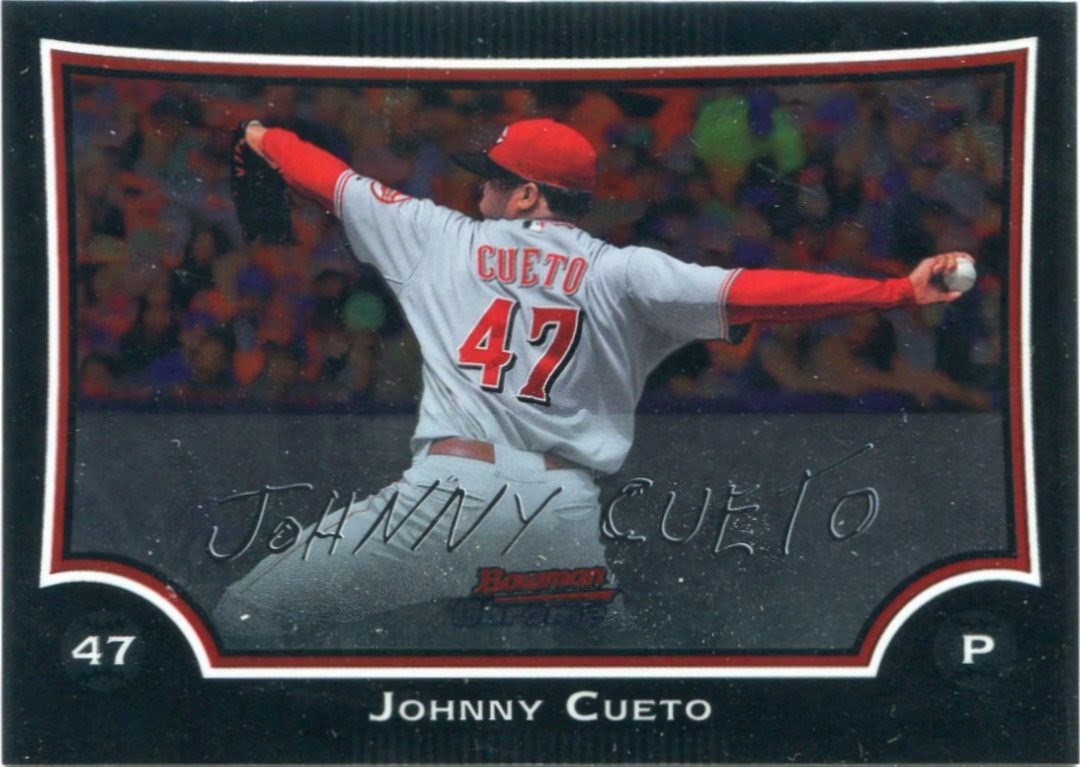 Then there's the mysterious tale of Johnny Cueto and his baffling signature.

Heck, it's not even a signature. Those are clear-cut print letters right there. And it wasn't a one-time happening, either. I have a few other Cueto cards that feature the exact same thing.

From what I know, the signatures used for these facsimile autographs are taken directly from each player's Topps contract. I guess no one told Mr. Cueto that he actually had to sign the form, and not just print his name.

At the very least, though, it certainly makes for a wacky baseball card. 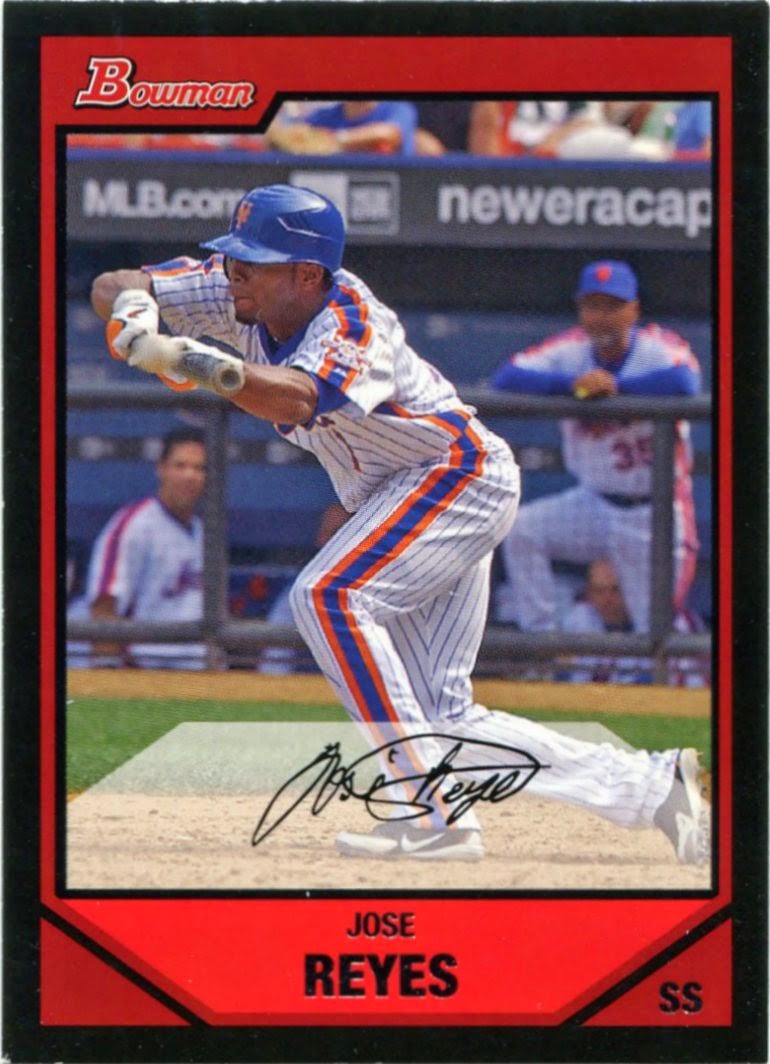 Ah, finally a bit of normalcy.

Nothing wrong with this shot at all. Mr. Reyes is in the process of laying down a drag bunt here. Let's not forget the terrific Mets throwback jersey, either. 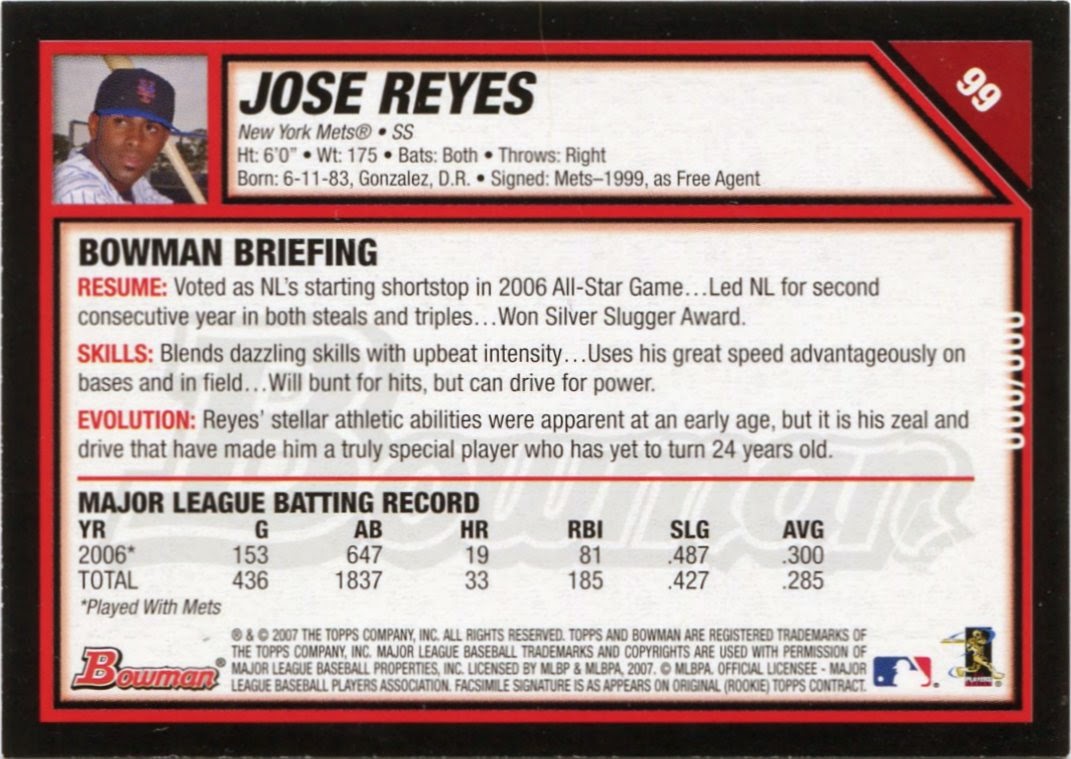 For the answer to that, we have to flip it over.

On the surface, the back looks fairly standard. Bio, stats, date of birth, the whole enchilada.

Take a look all the way to the right, though. See those mysterious markings near the borders? In case you can't tell from the scan, it reads "000/000".

I smell a screw-up.

My guess is that Reyes suffered through some kind of printing flaw, but I can't be sure. I don't know if every version of this card has the same markings, either.

I'm completely in the dark. 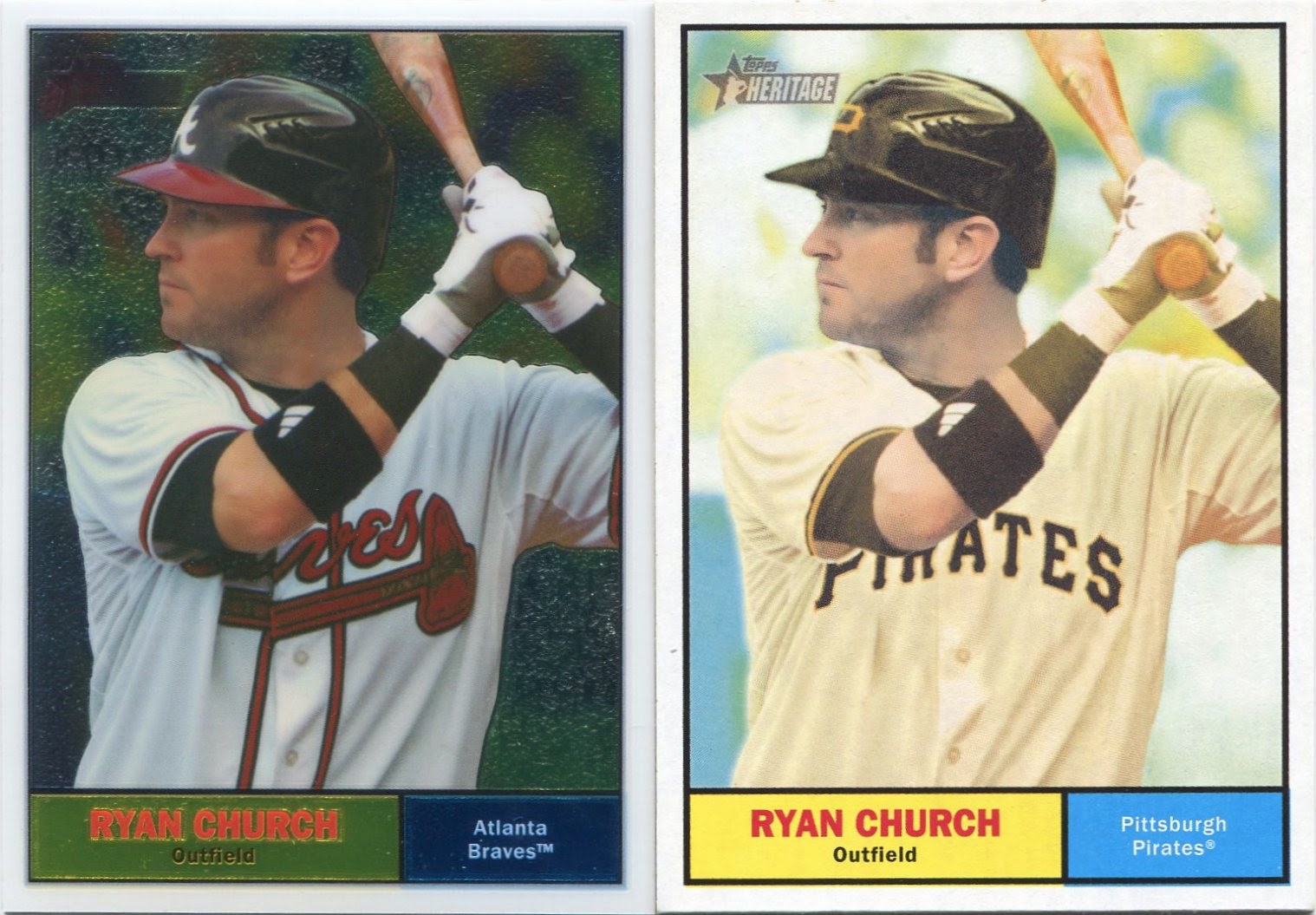 I've been desperately trying to come up with an explanation for this one.

After his offseason signing with Pittsburgh, Ryan Church was photoshopped into a Pirates jersey for his 2010 Heritage issue. Nothing strange there. We see this sort of thing all the time in the hobby, after all.

The puzzling part, however, is that Topps left the original photo of Church as a Brave intact for the chrome version of the very same card.

Why one and not the other? Was it laziness or simply an error on Topps's part? 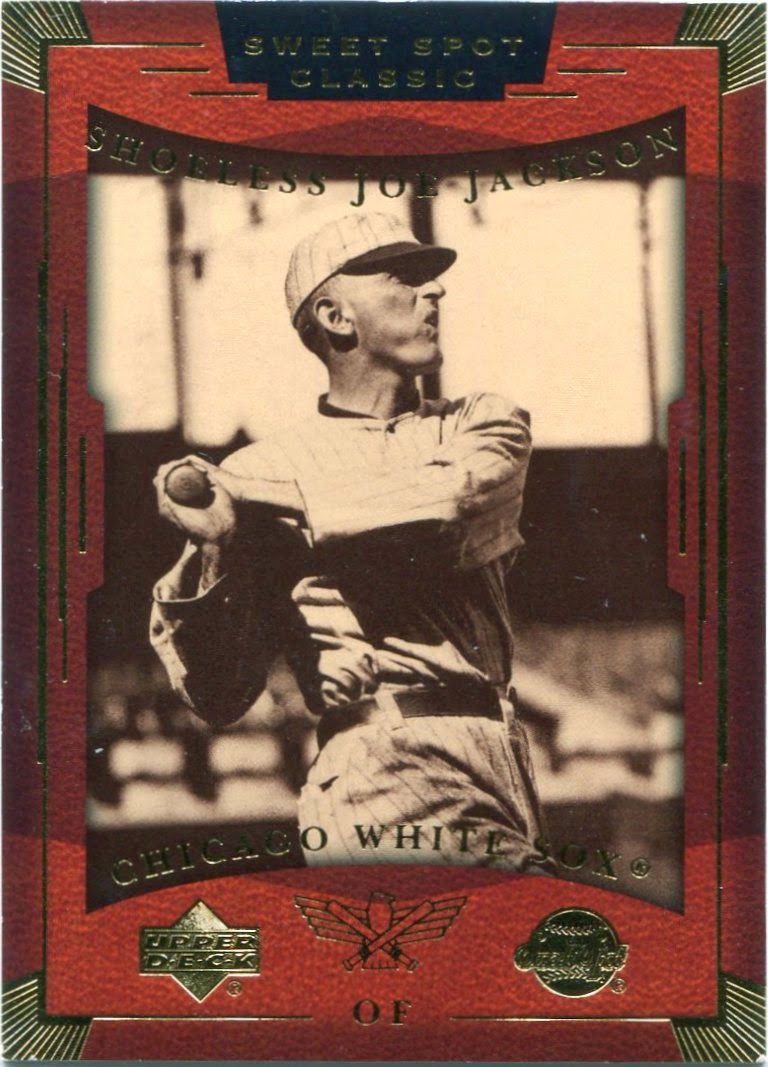 As we all know, "Shoeless" Joe Jackson was banned from baseball with the rest of the Black Sox for his alleged role in throwing the 1919 World Series.

That, as a result, barred him from any type of relations with the game in the future. No officially-licensed MLB product can ever feature Joe Jackson.

Though most of the "Shoeless Joe" singles I own are from oddball sets, Upper Deck somehow slipped a card of his into their 2004 Sweet Spot Classic checklist, one that was fully licensed by MLB.

It's not the only one, either. He even has a game-used bat card in 2001 SP Legendary Cuts, another fully-licensed product.

I remember reading about this particular issue in a Beckett long ago. (Yes, I used to own Becketts. I'm not proud of it.)

Even they, the so-called "experts", didn't have a good answer for this mystery. 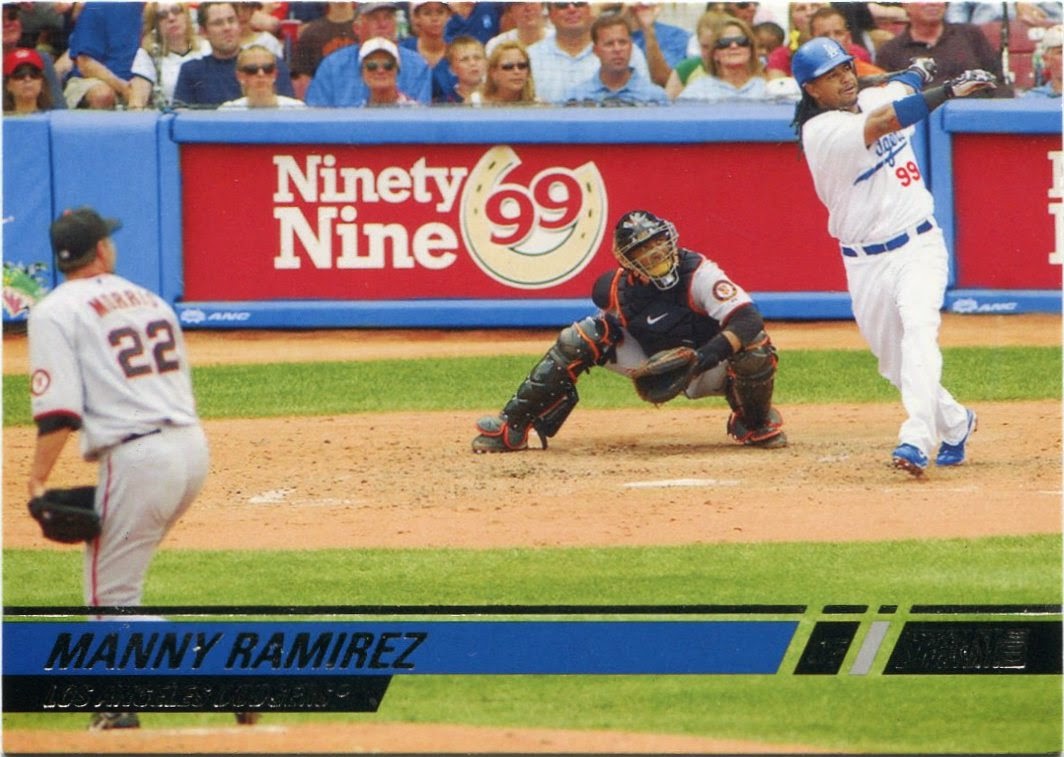 Perhaps the ultimate "Huh?" card, however, is this one.

If you ask me, it's one of the more interesting pieces released in the last 20 years or so. If not ever, for that matter.

With this card in 2008 Stadium Club, Topps was able to catch the "Manny-wood" craze that hit baseball after his midseason trade to L.A. that year. Ramirez is clearly sporting a photoshopped Dodgers jersey there.

Again, photoshopping pretty much the norm these days. I don't see anything wrong wi...

If the jersey isn't real, then why does that look like Dodger Stadium in the background?

And why is there a clearly fake advertisement for the Ninety-Nine Restaurants chain on that billboard?!?!

I guess some things are better left unexplained.
Posted by Nick at 6:51 PM

See - THIS is why I have a bunting binder. I happen to have the exact Reyes card and mine has the same ghosted 000/000 numbering on the right.

I didn't even notice there was photoshopping on the Manny card. I knew something didn't look right, but didn't know what it was, until you pointed out the missing ump. duh!

As for the Heritage Chrome inserts, that's not the least bit unique. I don't usually pay much attention to the chrome inserts (I'm there for the regular Heritage set), but I got several this year and all the photoshopped new team guys are like that. Ellsbury, for example, is a Yankee in the regular set, but his chrome parallel is as a Red Sox player. Robinson Cano is a Mariner in the set, but his chrome insert shows him as a Yankee. My best guess is that the chrome cards are printed up earlier than the base cards--before the player moves are made. Then they make the necessary adjustments for the regular set, knowing fans want to see the players in their new uniforms, even if through fakery. Either that or they're tossing a bone to fans of the players' previous teams.

They're all nice mysteries... except for the '59 WS card. Wanting to feature the Dodgers is no mystery. Come on, Nick.

I'd heard, then forgotten, about the '60s Topps photo cheapness. Never realized it was quite as bad as all that. Helps explain the '69 Hank Aguirre some Vintage Virtuoso recently sent my way. I was wondering why Topps didn't get a shot of him as a Dodger, even though they had a year to do it. Now I realize it was probably a four-year-old photo at the time.

Wow. Great job on the Cobb.

OMG! That Manny card is spectacular. I will have to get my hands on that one of these days.

Very cool info on the Brown & Bigelow card. If I had the money to collect vintage that would be a set I would collect, with all of the obscure local business that have all probably been out of business for decades.

Looks like B&B is still around and has some interesting history:
http://en.wikipedia.org/wiki/Brown_%26_Bigelow

Great find for a buck!