The anatomy of a blaster 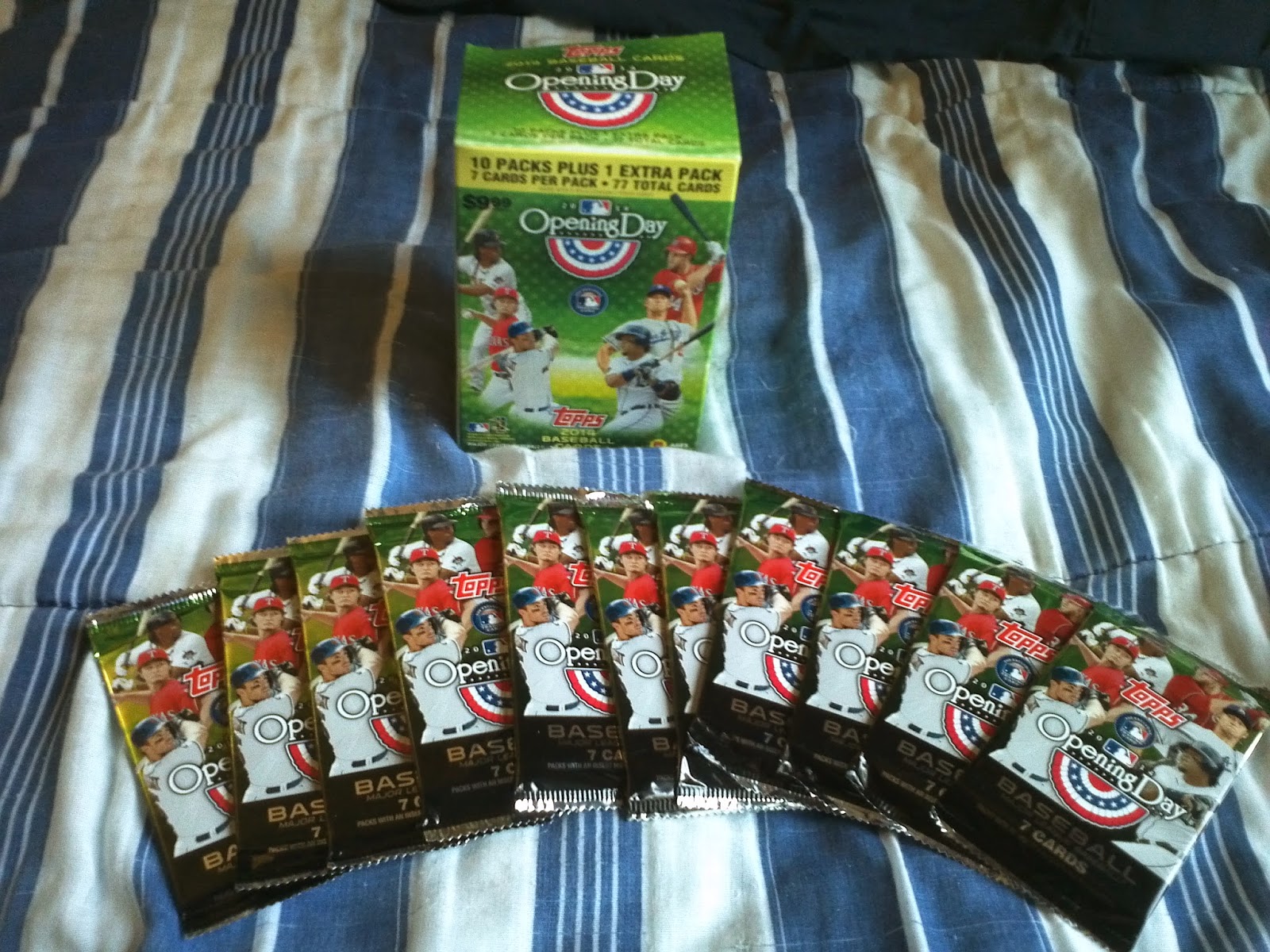 As much as I love writing, there are some limits to this blog.

Since I'm not one of those people who posts videos of themselves every five seconds, most of you know me simply by my posts. I'm "Dime Box Nick" or "The Dime Box Guy" to a lot of people around here.

I'm completely fine with that. I like having that sort of dime box niche here in the blogosphere.

Still, there's a certain wall that exists between a blogger and a reader. Unless you're some sort of creepy stalker, you don't know much about what goes on behind the scenes of a blogger's collection unless he or she specifically opens that world up to you.

Through my writings, I've been trying to break down that invisible wall that separates blogger and reader more and more lately. I've documented the specifics of how I collect many times in the past, and I took many of you on "the grand tour" not too long ago.

Today, though, I'd like to show what exactly happens when I acquire new cards for my collection. Thanks to a blaster of Opening Day courtesy of my dad, we have a perfect starting point.

I love bragging about my finds after a nice retail break, but there's a whole lot than the simple feeling of "check out these awesome cards!" when I open a blaster or whatnot.

It's actually a good deal of work. 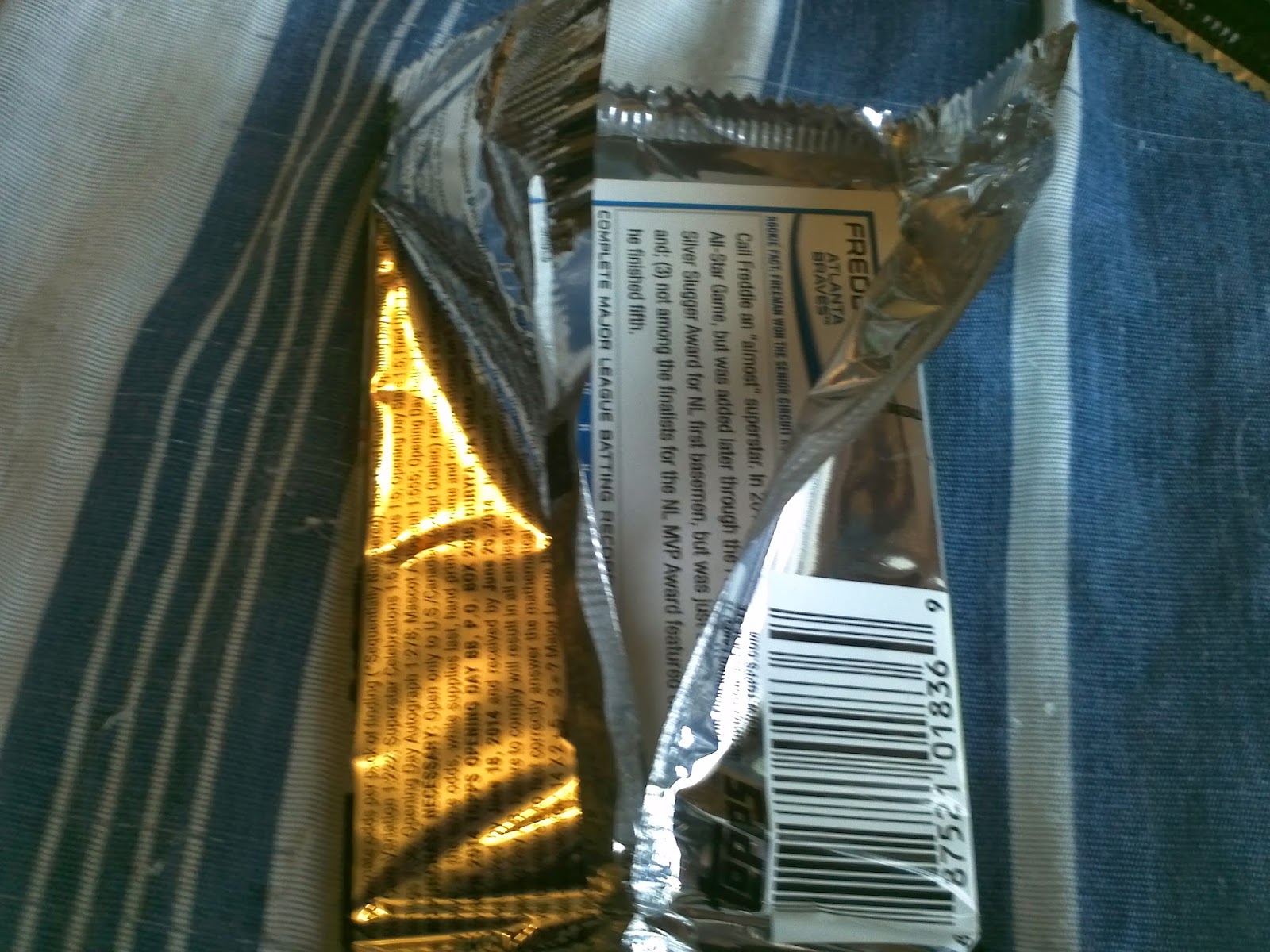 Step #1 of busting a blaster is pretty simple.

I'm sure most collectors know the familiar popping sound that accompanies opening a fresh new pack of cards. Hearing that sound has become sort of an addiction over the years. There could literally be anything inside.

Maybe I'm in the minority here, but I actually like to look at the back of the last card of the pack before flipping them over.

I'll bet a lot of collectors avert their eyes and just go straight for that first card without peeking at the back. 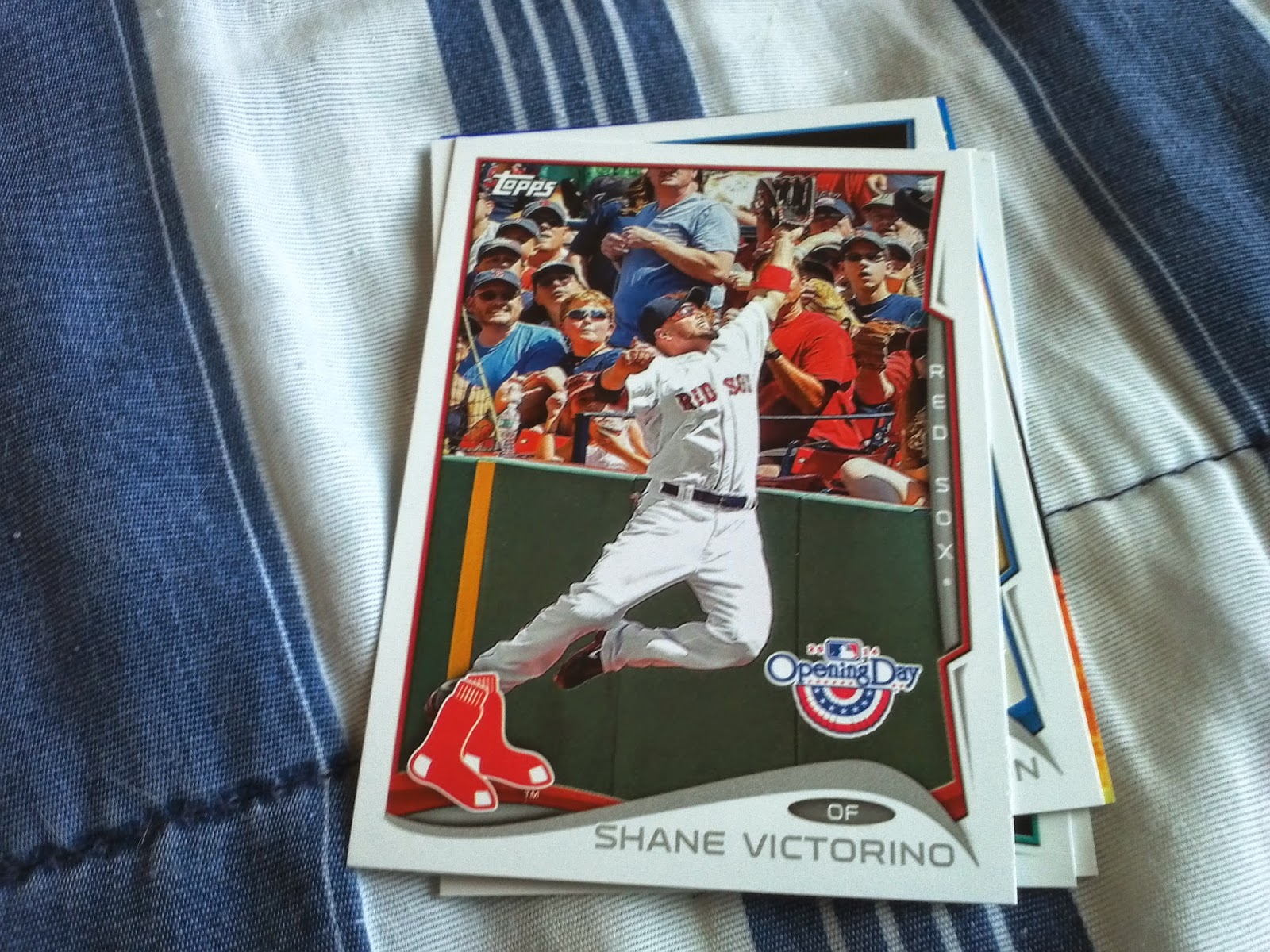 I don't do any sorting while I'm in the process of opening packs.

I go through each one, absorb the cards inside, and throw the contents into a stack. Thanks to Opening Day's budget-minded ways, this was a process I got to repeat eleven times during the course of this blaster.

For most posts, that's where the story would end. I'd go through everything, pick out the most "blog-worthy" ones, and show them to you.

Although there were certainly quite a few "blog-worthy" cards in this blaster, that's not how this post is going to go. 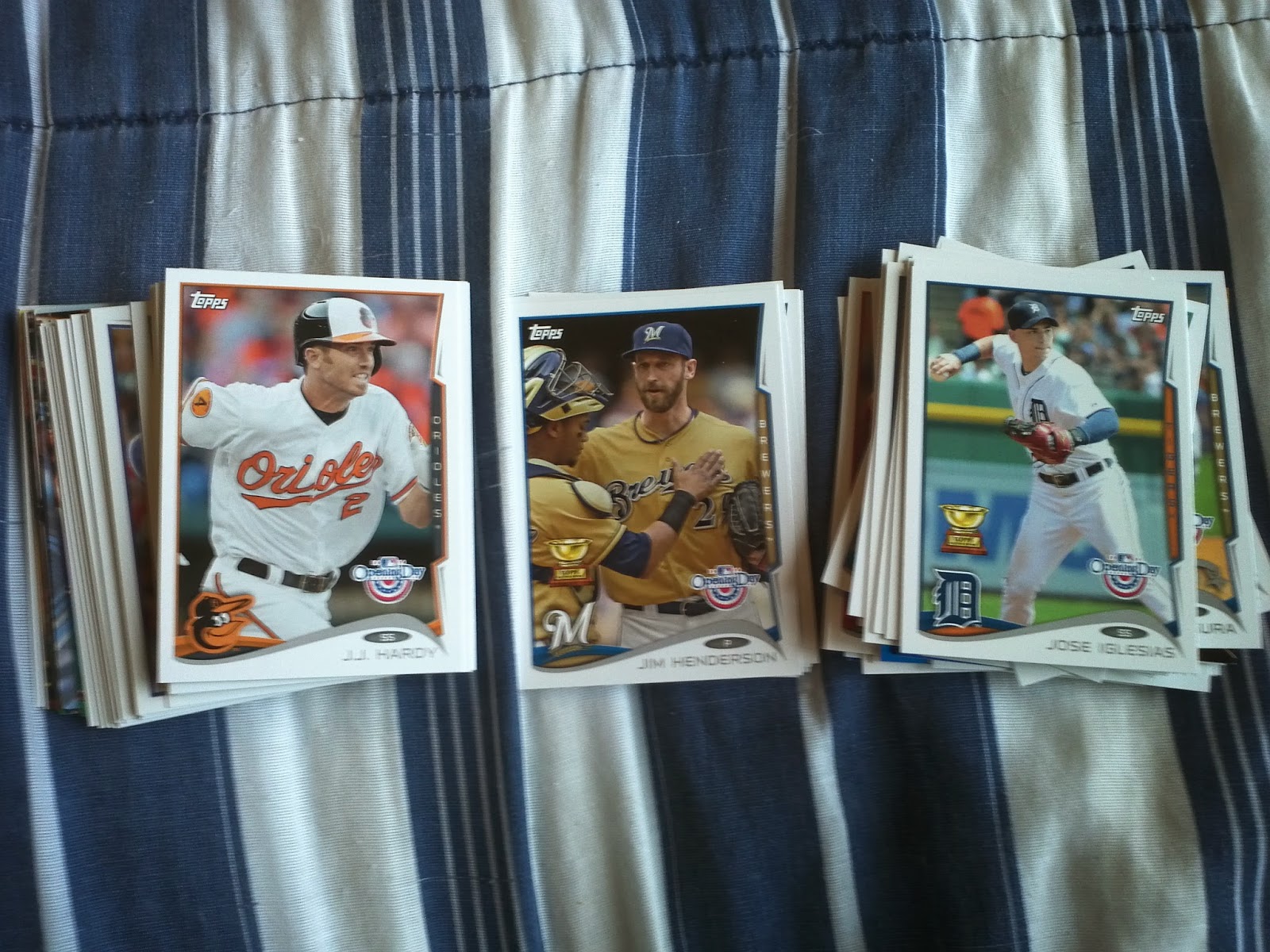 Nope, you're getting an exclusive backstage pass into the post-opening process here tonight.

There are a few very clear stages of busting a blaster or box or whatever you might have on hand.

Step #1, as you just saw, was the process of actually opening and absorbing all the cards you pulled. That might be the pinnacle of the blaster experience.

After the despair of not having anymore packs to open wears off, step #2 begins.

If luck was on my side, that stack on the left should be the biggest of the three.

Thankfully, it was with this blaster. 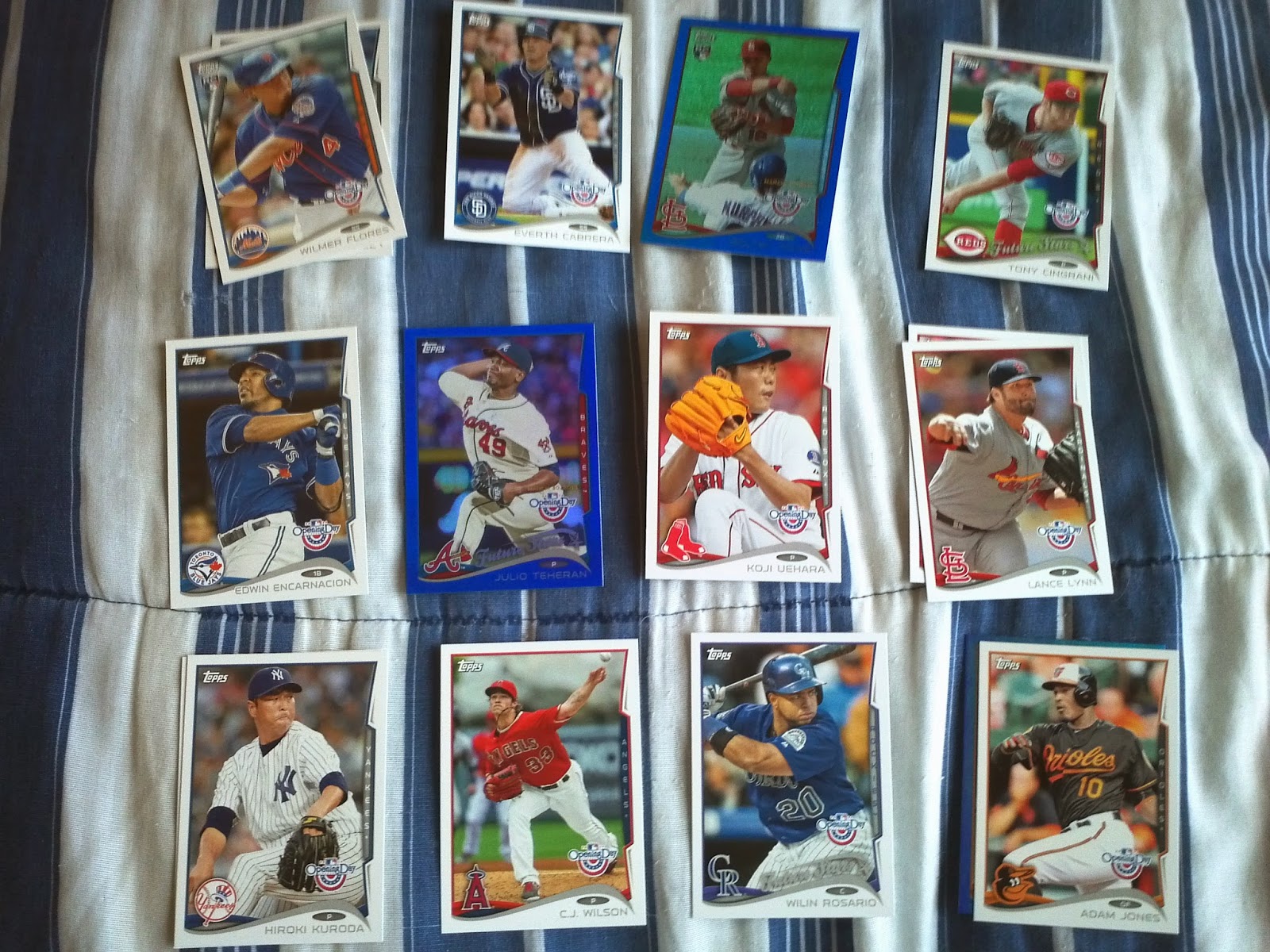 That said, I'd like to start with the pile on the right.

Even though it may seem like I want everything, not every card I pull is going to be a need. That's just how it goes when you're busting retail.

Thankfully, though, I've begun to take notice of what other people collect during my time here. And, though I've been slacking a bit with sending out trade packages lately, I'm constantly putting cards aside that I think other blogger buddies might enjoy.

Whether it's Mets, Red Sox, Braves, or any other team seen here, these will all find good homes in due time. 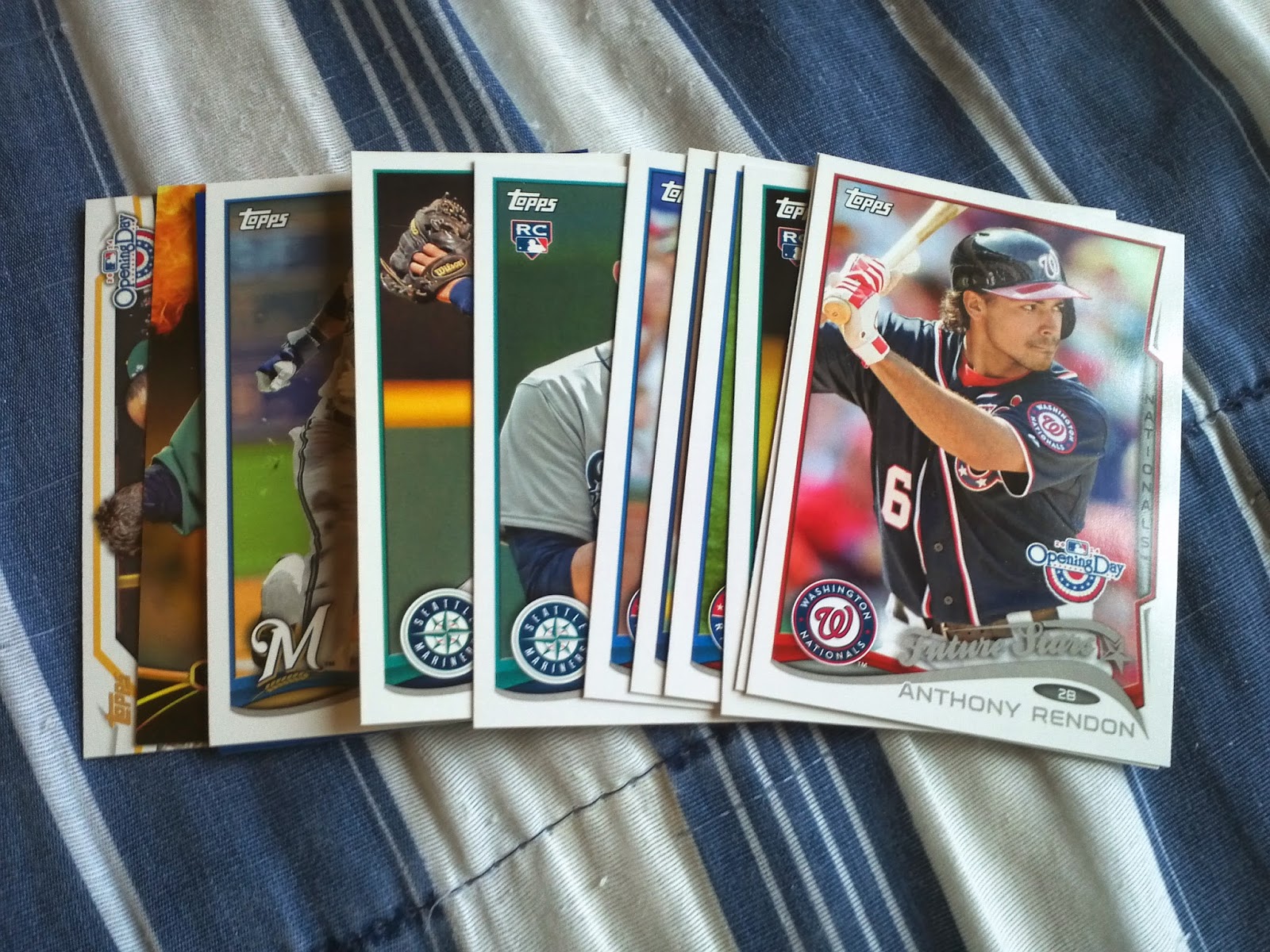 Sadly, the same can't be said about every extra I pull.

Though I've met a lot of great people around here, I don't have good homes lined up for some of these cards.

To date, I don't think I've ever traded with a Mariners or Twins fan, which pretty much puts extras of those teams (and a few others) in limbo.

These are the cards that wind up in my dups box, dreaming of the day that they'll wind up in a better home with more love and care than I could ever give them. 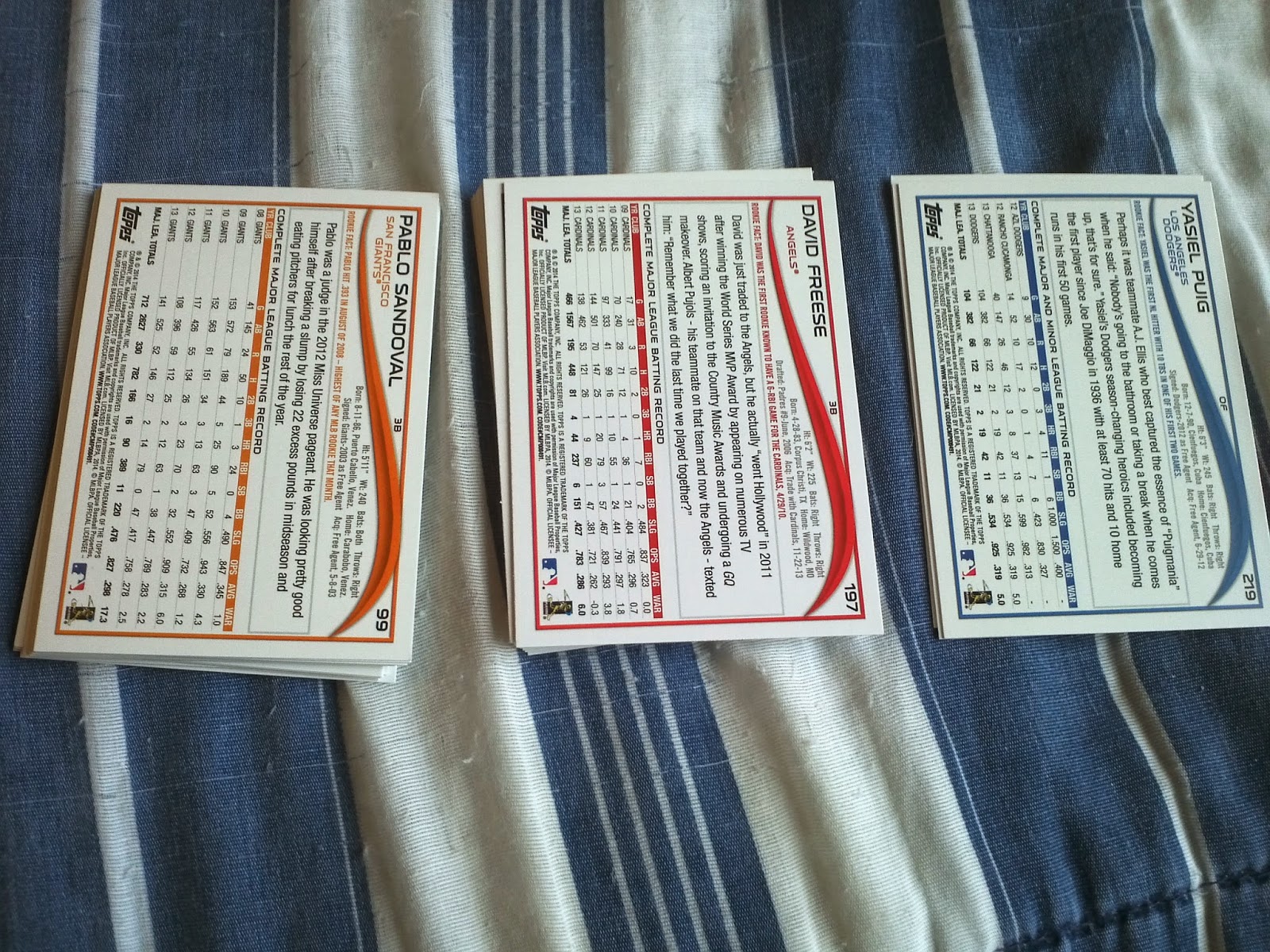 Now, let's move onto the so-called "rock stars" of every blaster.

With my seemingly random ways, I probably hang onto more cards than most people. It's no secret that I collect a lot of different things.

Every time I open a blaster, the keepers go through a couple different sorting stages.

Firstly, I sort them by number. On the left is every card I need between numbers 1-99. In the middle are numbers 101-199, and on the right are numbers 200 and up. (I do the same with the frankenset cards as well.)

This allows me to maintain some sort of sanity in keeping the "set needs" page on the sidebar of this blog updated. Thankfully, this blaster knocked out a good chunk of my remaining Opening Day base wants.

I can happily say that the sidebar is now fully up to date. 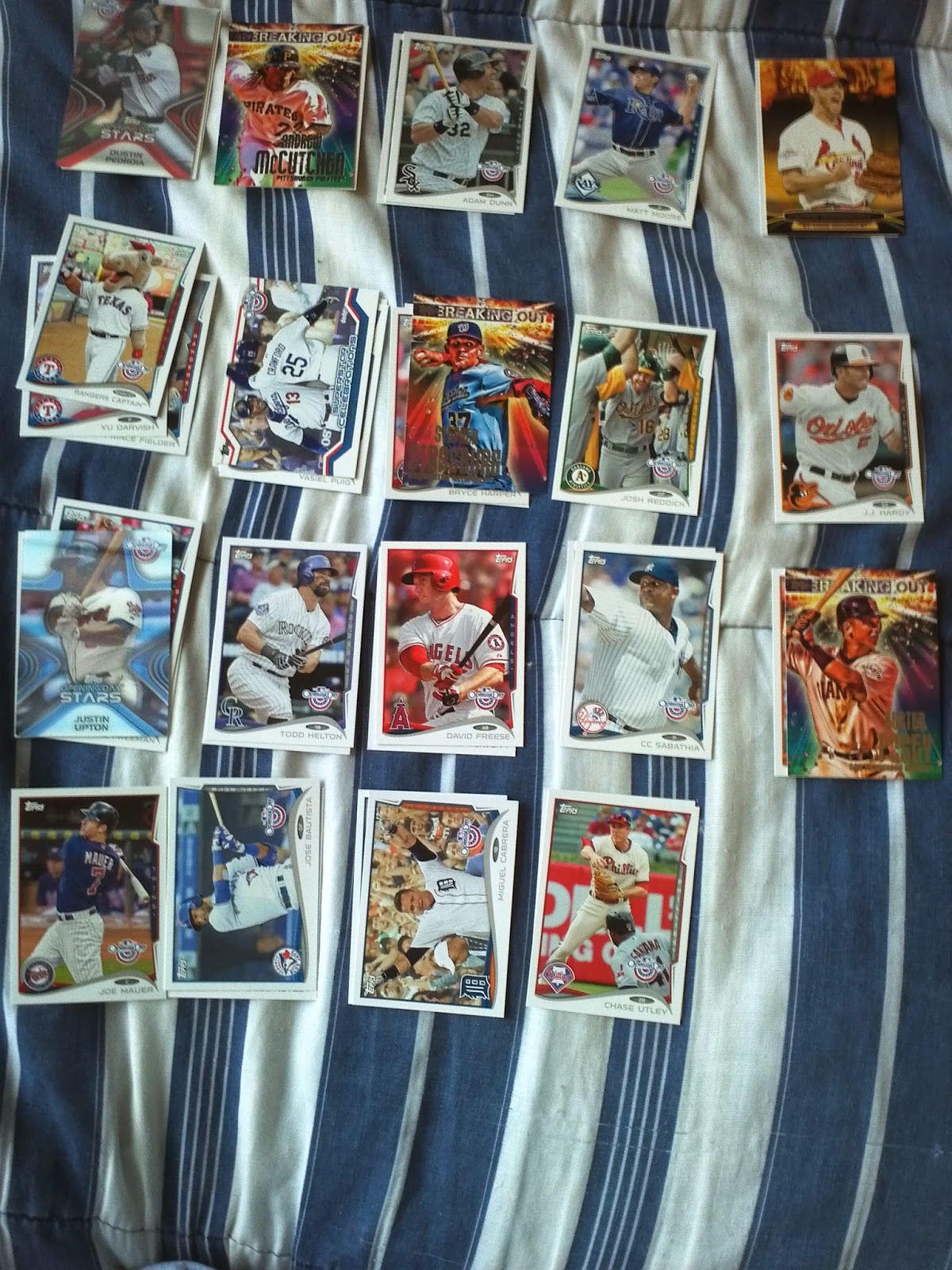 After that, however, the real sorting fun begins.

As I've mentioned before, almost my entire collection is organized by team. Whether it be a card show, blaster, or whatever, the last sorting process that occurs is the grouping by team.

Each pile above represents a different MLB squad. This blaster alone added new cards to 19 different teams in my binders.

From there, I organize them alphabetically by team (Angels first, Yankees last) and prep them to eventually be filed away. 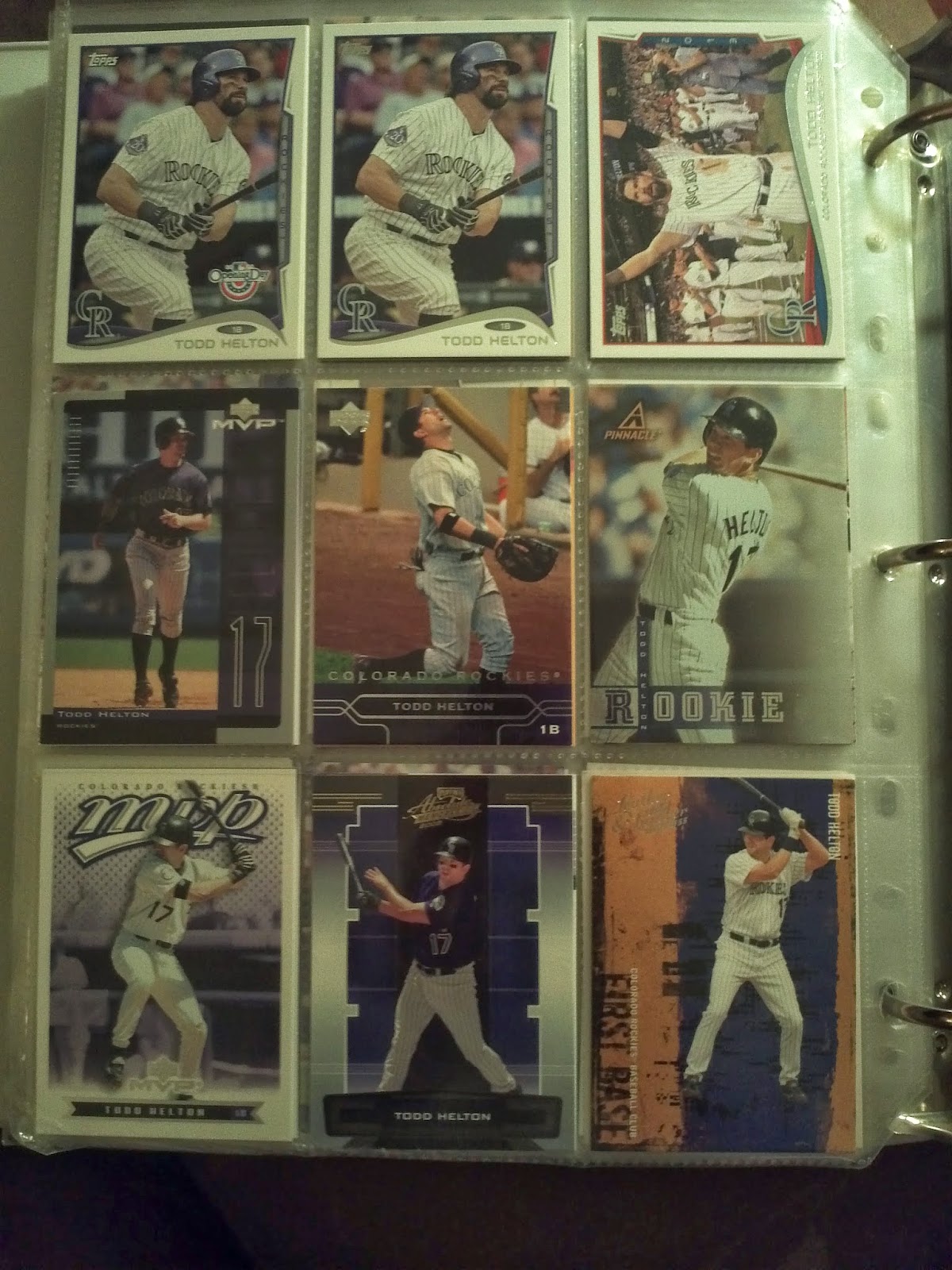 That's where the third and final step of this process begins.

I don't always have time to do filing, so cards can sit on the living room table for days or weeks on end. (In the case of a mammoth card show, it can take upwards of a month.)

I think I managed to put the contents of this blaster away within a couple days. One of the better pulls was the Opening Day version of Todd Helton's "sunset" issue, seen here in the top-left corner. It looks beautiful next to its Flagship counterparts.

That, my friends, is why I will always be a binder guy.

Once the last cards are put away, the process ends. At least until the next blaster comes along, anyways.

Then it starts all over again.

It's a vicious cycle, but I wouldn't have it any other way.
Posted by Nick at 6:13 PM

Wait. Am I understanding correctly? You separate cards for a set you're building (Opening Day) into stacks of different teams and then put them in binders? So in the end you'll have a complete set, but it won't be together?

No, I think I missed something.

What I always wonder about binder guys is what if a card "belongs" (whatever than may mean to you) somewhere that requires you to move each card over for pages on end? Do you leave blank spots in anticipation? Or is the order of the cards flexible?

My process is a little different, but we have one key thing in common... the cards often sit for days or weeks on end waiting to be filed. Great post.

Tom -- I actually don't build sets. The cards on my "set needs" page are actually just guys I collect. Grouping them by number seems to make it easier for others and makes creating a want list easier as well.

Ethan -- Much of my filing involves moving cards over amongst a few pages, but I have blank spots in all my binders so the process doesn't take too long

BTW if that Hiroki Kuroda (that is one of your extras right?) is available I'd love to trade for it.

Hello Mr. Zappy, I have kind of a general Yankees pile for a few different bloggers, but I can definitely send the Kuroda and a few other Bronx Bombers your way.

Please shoot me your address via email at nickpecucci AT sbcglobal DOT net if you see this. Thanks!

Great post. We all have our individual rituals but opening the packs is by far where the excitement is. Like you, getting things actually organized and filed in binders is tough. No matter it is always fun if not some work. Keep up the good work.