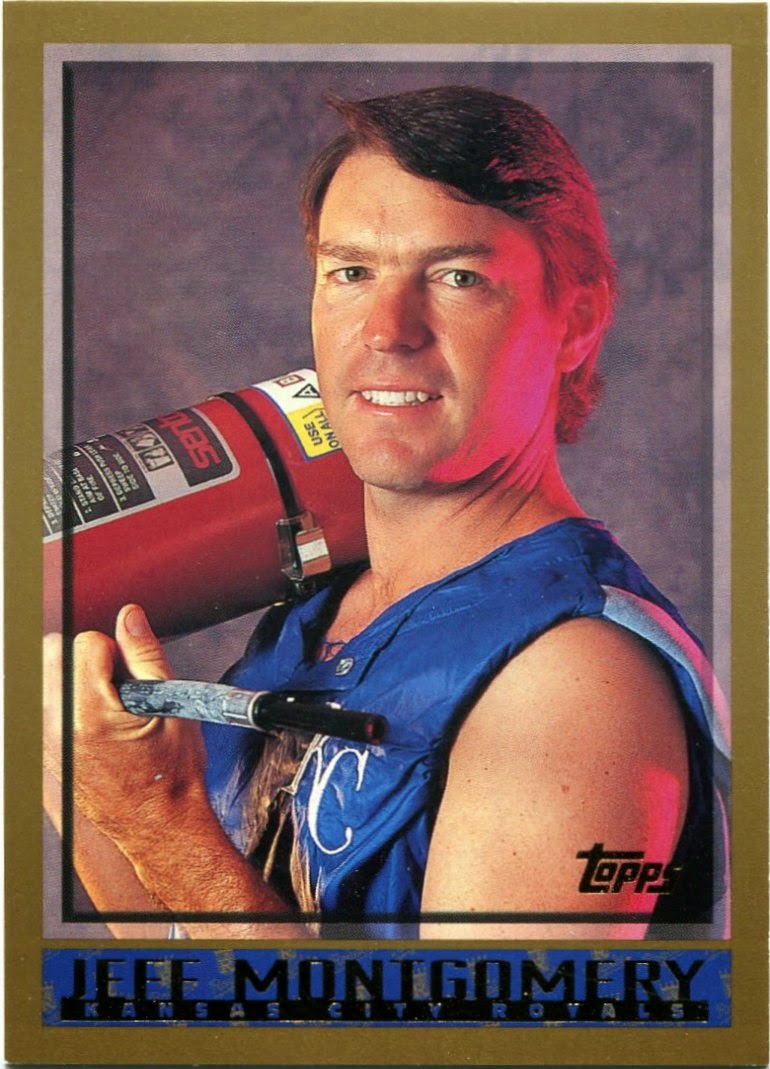 What if I told you the 1990's was the most game-changing decade in the history of baseball cards?

Some of you would probably laugh in my face.

Yes, bro. I bought my first packs of baseball cards in the '90s. As you might guess, I have a special bond with the decade. So, just for tonight, I'd like you to actually stop and consider what I said at the beginning of this post.

I just so happen to have a couple '90s-centric trade packages to provide as evidence. The first comes from all-around good guy Mark of the terrific blog "Mark's Ephemera".

I'm not sure you'll find a more '90s card than the Montgomery you see above. The fun "fireman" theme was a grand departure from the rather stoic posed shots Topps went with in the past.

Creative cards like these started to become the norm by the time the '90s came to an end.

It's almost hard to believe that such bland sets like 1990 Topps and 1991 Donruss came from the very same decade. 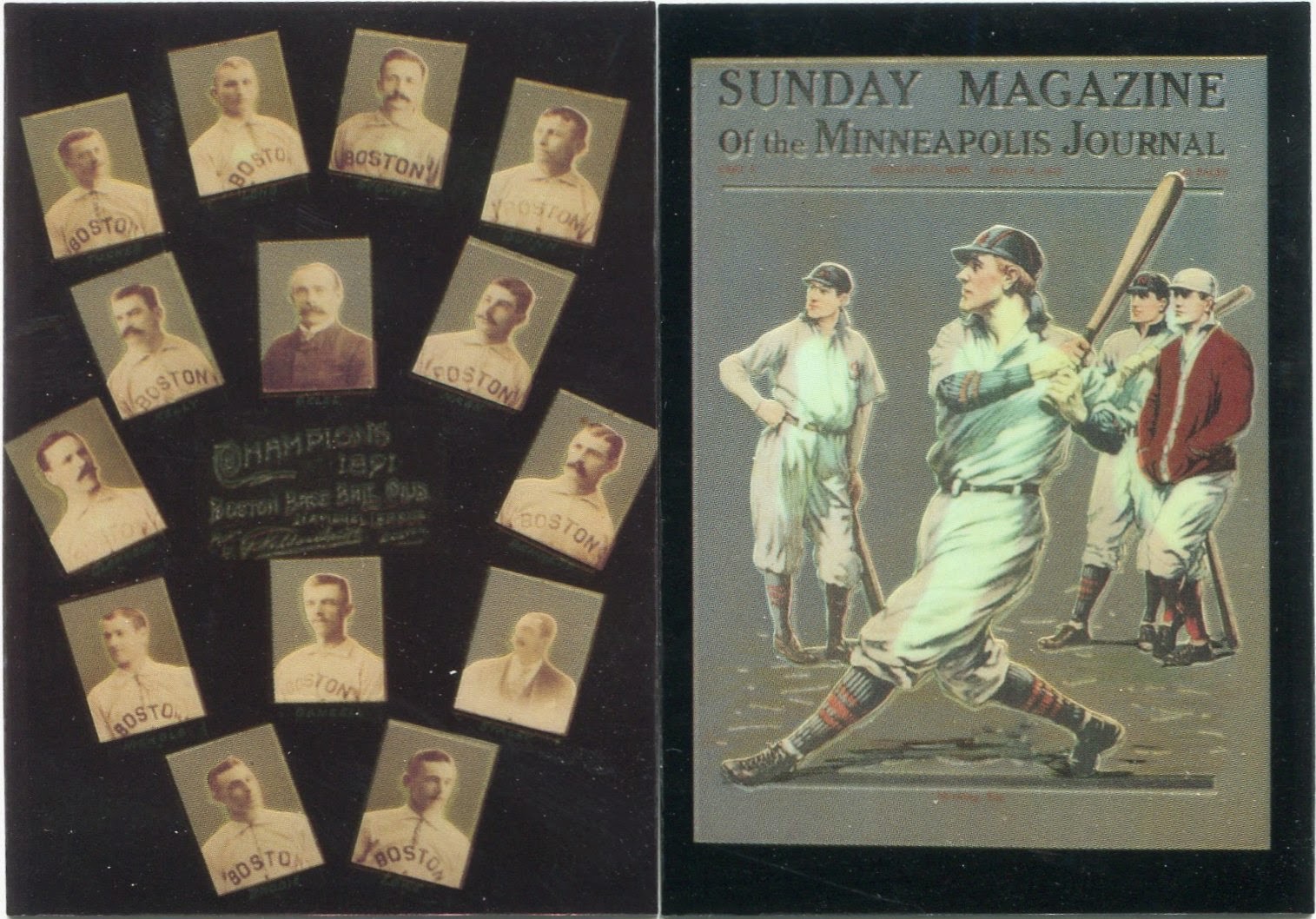 Had I not joined the blogosphere, I doubt I would've ever come in contact with these beauties.

They hail from the 1995 Phil Rizzuto's National Pastime retro series, a set I've talked about extensively in the past.

Only the '90s could pull of a combination of chrome and turn-of-the-century baseball. 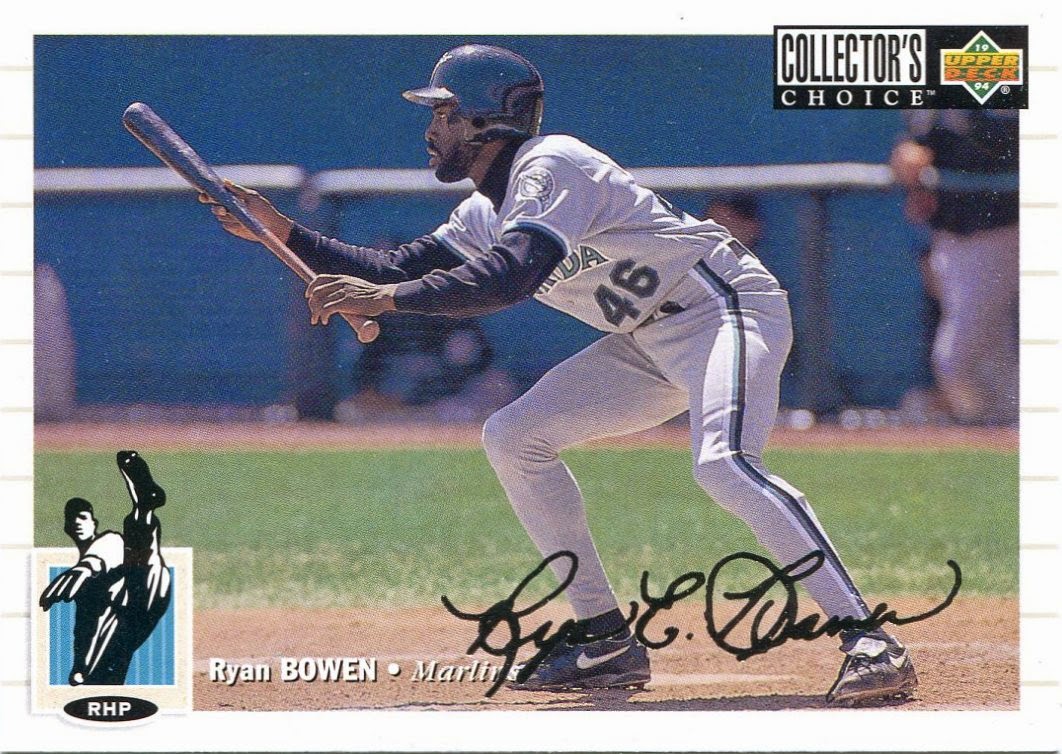 I'd even go out on a limb and say that Collector's Choice was the greatest brand of the 1990's.

To me, it's everything that today's Topps Flagship should be. It's cheap, fun, and satisfying cardboard, without all the unnecessary bells and whistles that Topps seems to think collectors want these days.

These silver signature parallels were about as crazy as the inserts and parallels went in Collector's Choice. Aside from that, the focus was completely on the cards themselves.

While I'm not sure anyone knew it at the time, Collector's Choice may well have brought about a major change in the hobby. For my money, it was the first brand to provide a healthy mix of great action, funny poses, and all-around quality.

I can probably count the numbers of "pitchers at the plate" we've seen in the last five years on one hand. Collector's Choice did that and more by giving Mr. Bowen a horizontal hitting shot here.

I'm not sure we'll ever see another card like this again, sadly. 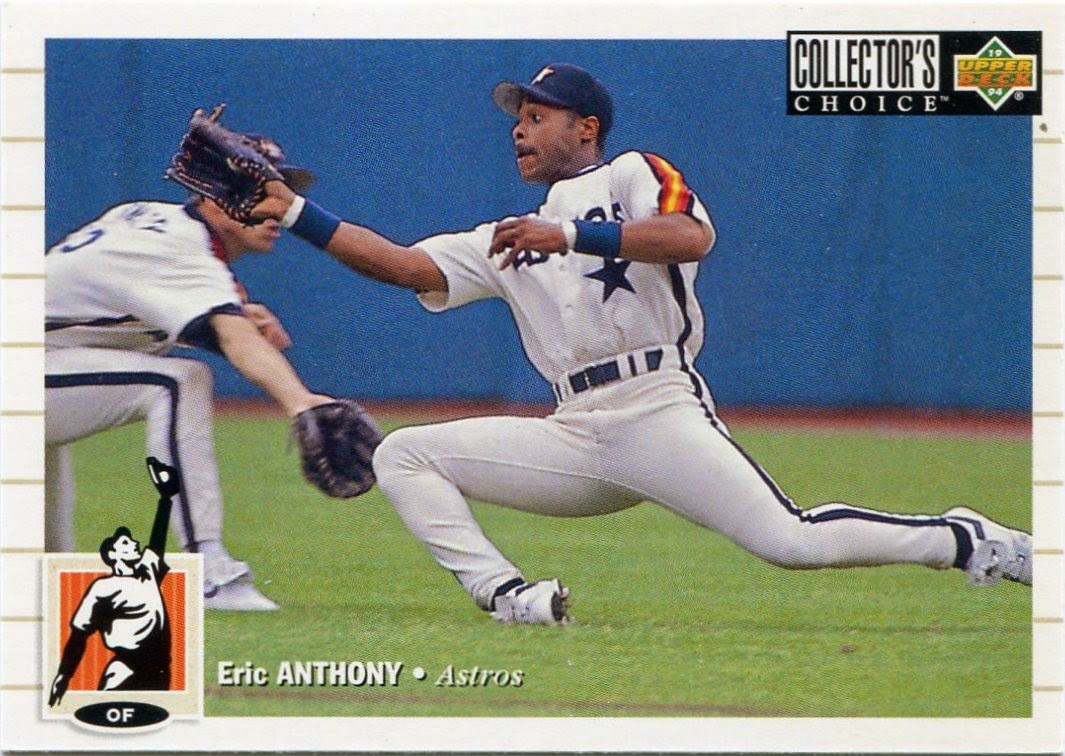 While I don't like to throw around the term too often, there's no denying that Collector's Choice was indeed unique for its time.

I can't imagine many other cards released in 1994 looked quite like this one. It may be the only potential outfield collision shot in history.

If Upper Deck ever manages to regain its baseball card license, Collector's Choice is the first brand they should revive.

I think it'd be a nice shot in the arm for the hobby. 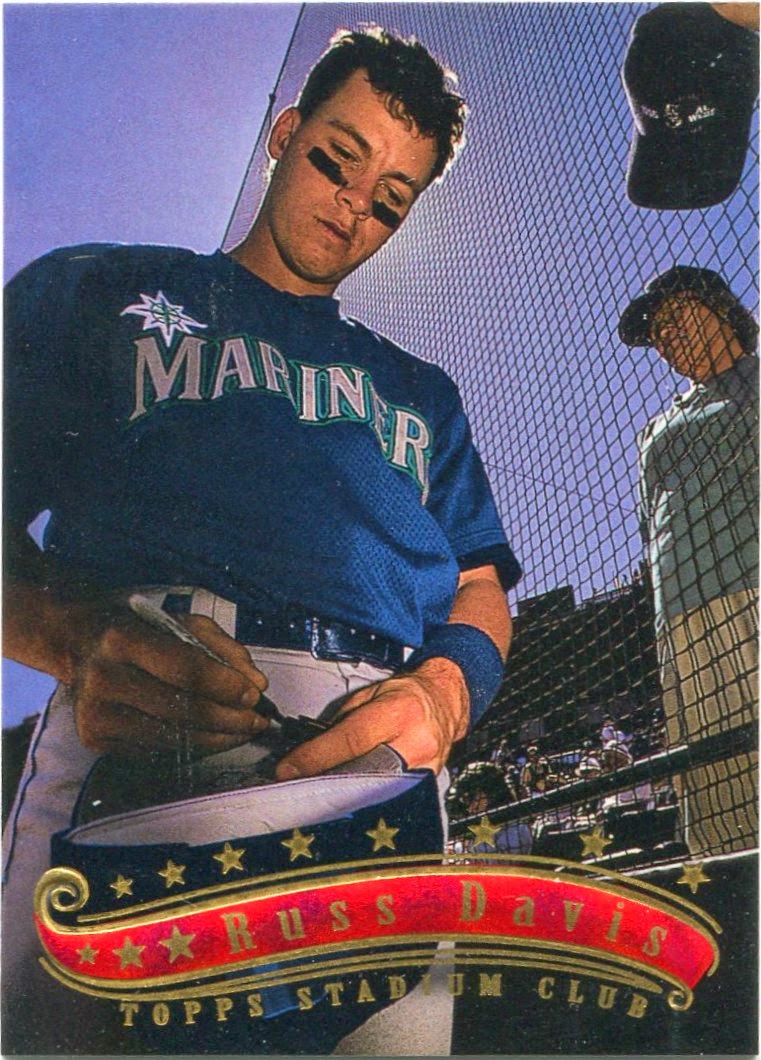 Without the '90s, I'm not sure I'd even have mini-collections.

In fact, I'd say about a third of the cards in my frankenset binder come from the 1990's.

Autograph shots in particular seemed to take off during the decade. This, and the remainder of the cards you'll see in this post, hailed from a completely unexpected trade package from A.J. of the awesome blog "The Lost Collector".

One of the first things that pops into my mind about the '90s is Stadium Club. Without it, we might still be seeing boring 1990 Donruss-ish photos in today's sets.

For that, we owe Stadium Club a great debt. 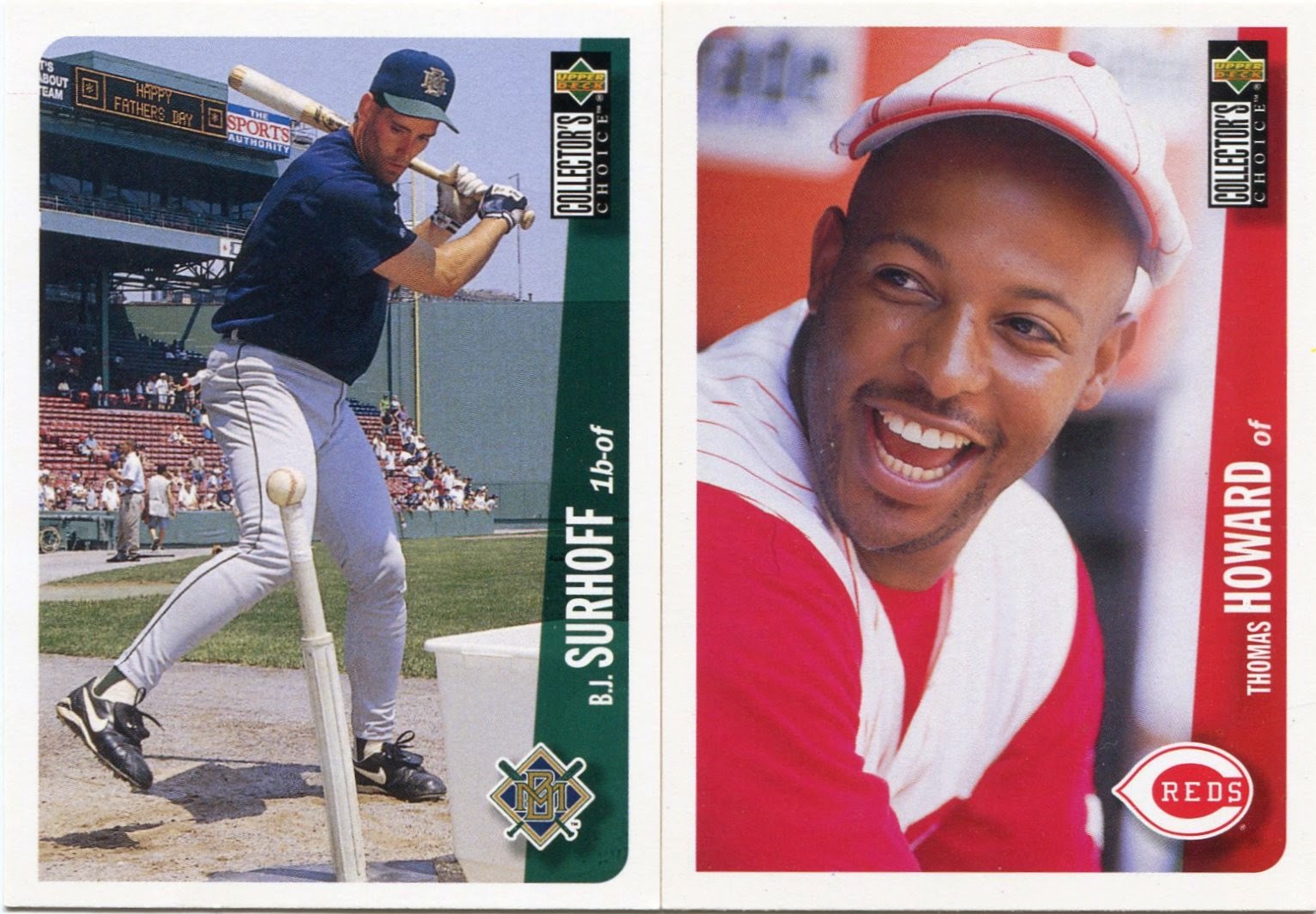 Collector's Choice stayed strong until its death in the late '90s.

I still find it hard to believe that such a great brand only stuck around for a mere five years.

It's one of the great tragedies in baseball card history. 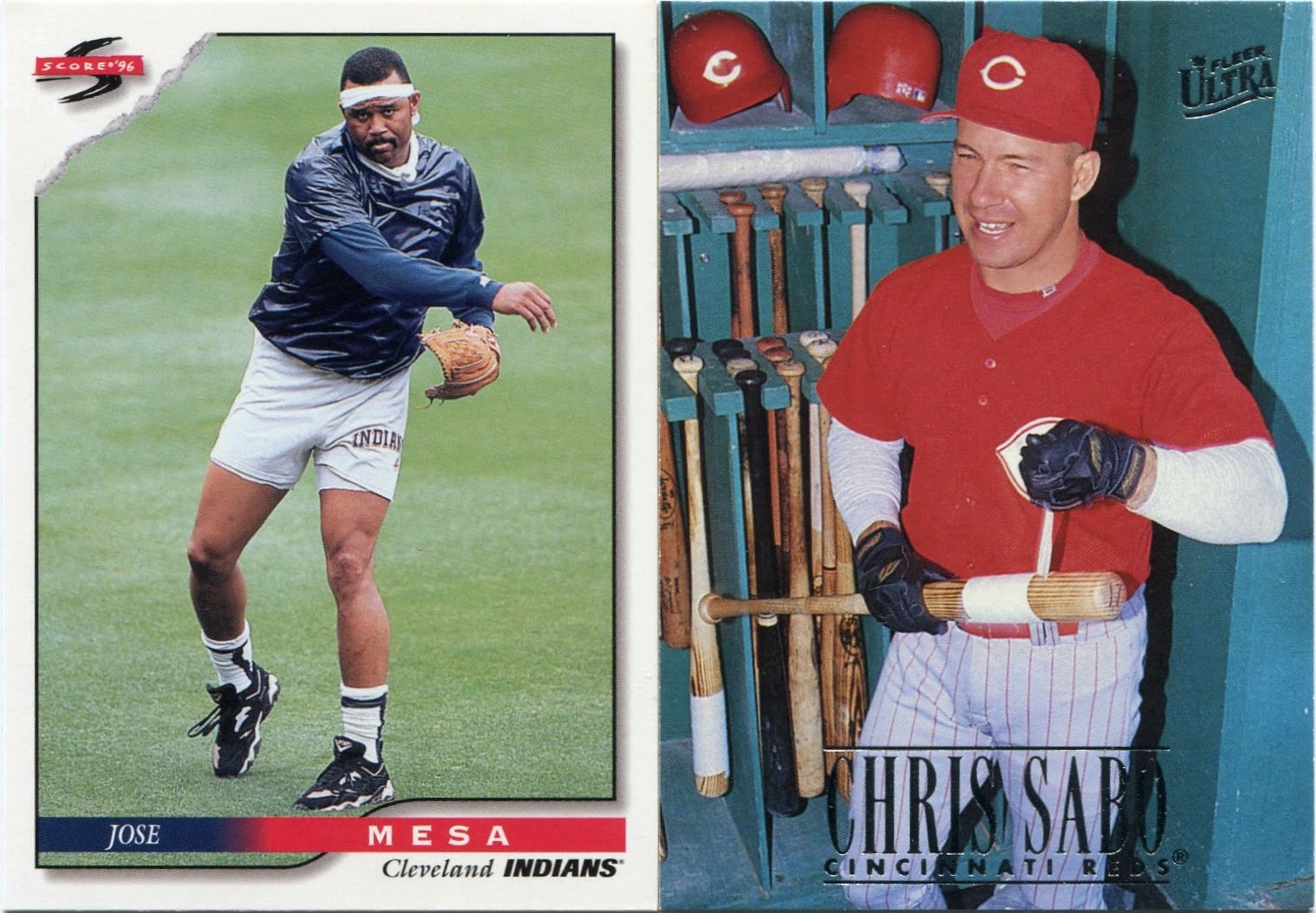 If the '90s really was such a game-changing decade, Nick, how come it's basically treated like a lost cause these days?

I think it's because no one was really around to appreciate it at the time. As most collectors know, the hobby lost a great deal of members after the 1994 baseball strike.

The overproduction boom was already trending downward at the time. The strike was pretty much rock bottom for the hobby.

I honestly don't know how many collectors were around to see these great cards of Jose Mesa's headband/short shorts combo or Chris Sabo's fungo bat.

Not many, I'd guess. 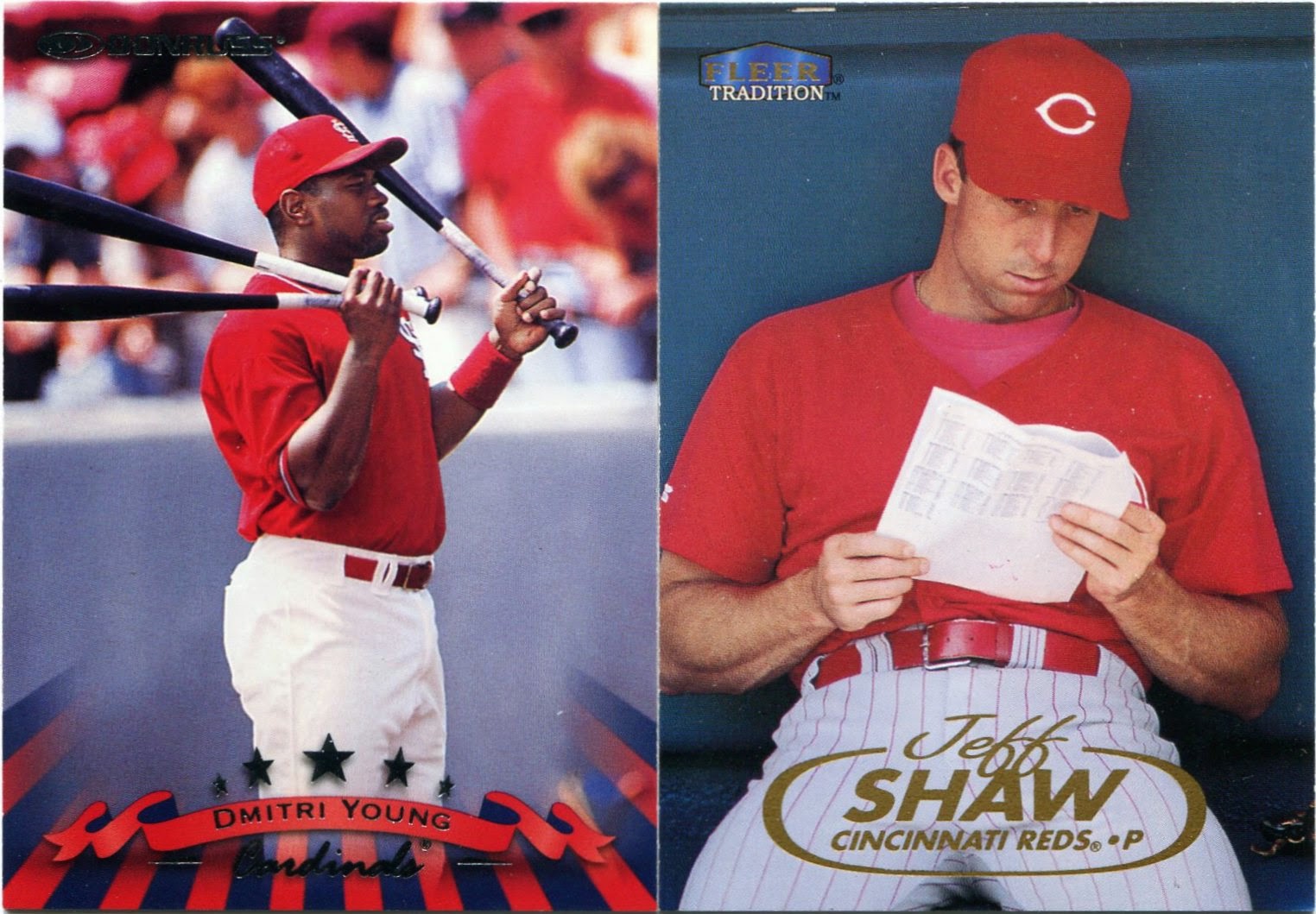 I caught the tail end of the decade when I bought my first packs around 1998.

I didn't know just how far the hobby had come in such a short time. I assumed that cards always had shots of guys holding three bats or guys crunching numbers in the dugout.

How wrong I was.

A lot of the cards from my earliest days of collecting have stayed with me to this day. I've acquired loads of secondhand '90s cardboard in the years since.

They've given me a whole new appreciation of the decade that introduced me to this hobby. 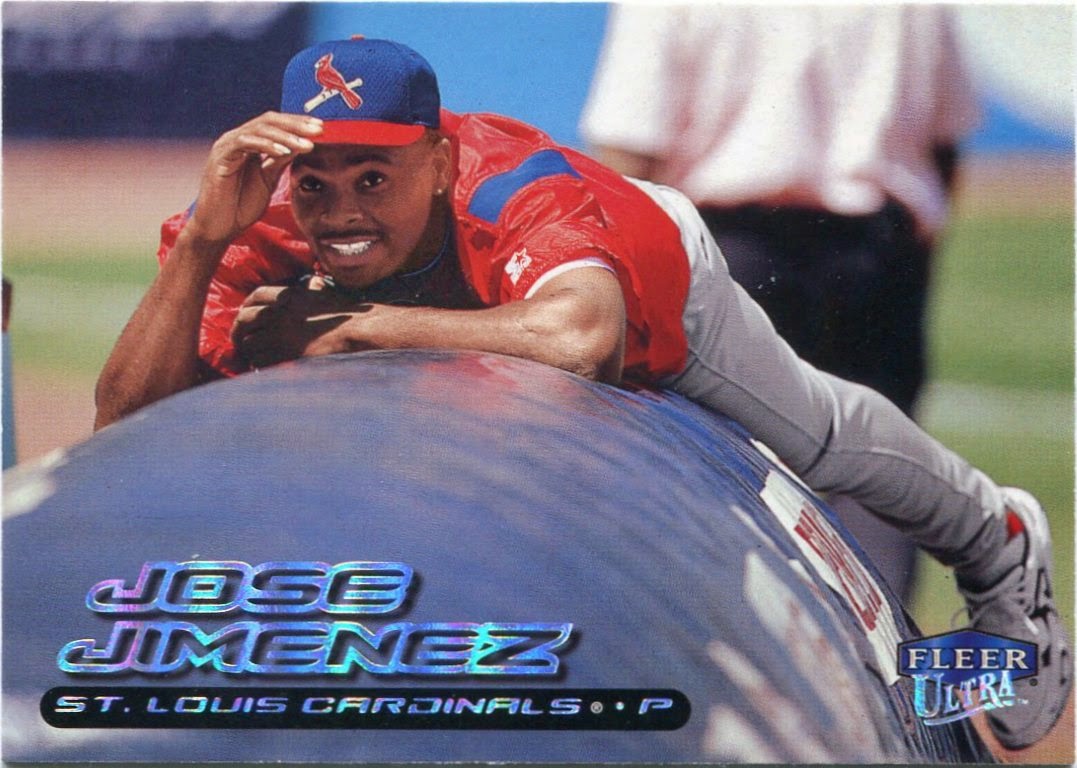 The final suspect from A.J.'s loot is the only one in this post that doesn't come from the 1990's.

No, Mr. Jimenez here was the start of a new generation of baseball cards in 2000. Still, I doubt a quirky tarp shot like this would've been possible without the outside-the-box thinking of the '90s.

Similarly, I doubt I'd be collecting today had I not gotten my start during the '90s, either.

I'd get the bulk of my cardboard experience during the "aughts", but my first few years laid the groundwork for the collector you're reading about right now.

Had it not been for the '90s, I might have wound up living a life without baseball cards.

I don't even want to think about how that would've played out.
Posted by Nick at 5:30 PM

I collected all through the 90's, and I'll admit I tend to look down on that decade because of the ugly card designs and the introduction of foil and other questionable features... but you make an excellent case. Card photography did advance by leaps and bounds during that decade. Gotta take the good with the bad, I guess.

The reason that Collector's Choice didn't last is because I liked it and collected it every year. Anything I enjoy seems to have a short lifespan.

I have collected cards for over three decades... and I totally agree with you. Collecting in the 90's changed the landscape of our hobby. Autographs and memorabilia cards arrived on the scene. Parallels and inserts were taken to the next level. And the technology used on cards was nothing short of breathtaking. Acetates, refractors, mirrors, artist's proofs, leather, wood, laser cut diecuts, dufex, holograms, and foil cards rule!

Don't get me wrong... I love holding and smelling my vintage cards. They're some of my favorite cards in the collection. But in terms of game changing time periods... it's hard to argue against what the 90's brought to the table.

I'm just happy that the Jeff Montgomery card is out of my house and into yours.

Agree with you about Collector's Choice. Would Upper Deck return to business and would start with that set and it would be simply great!