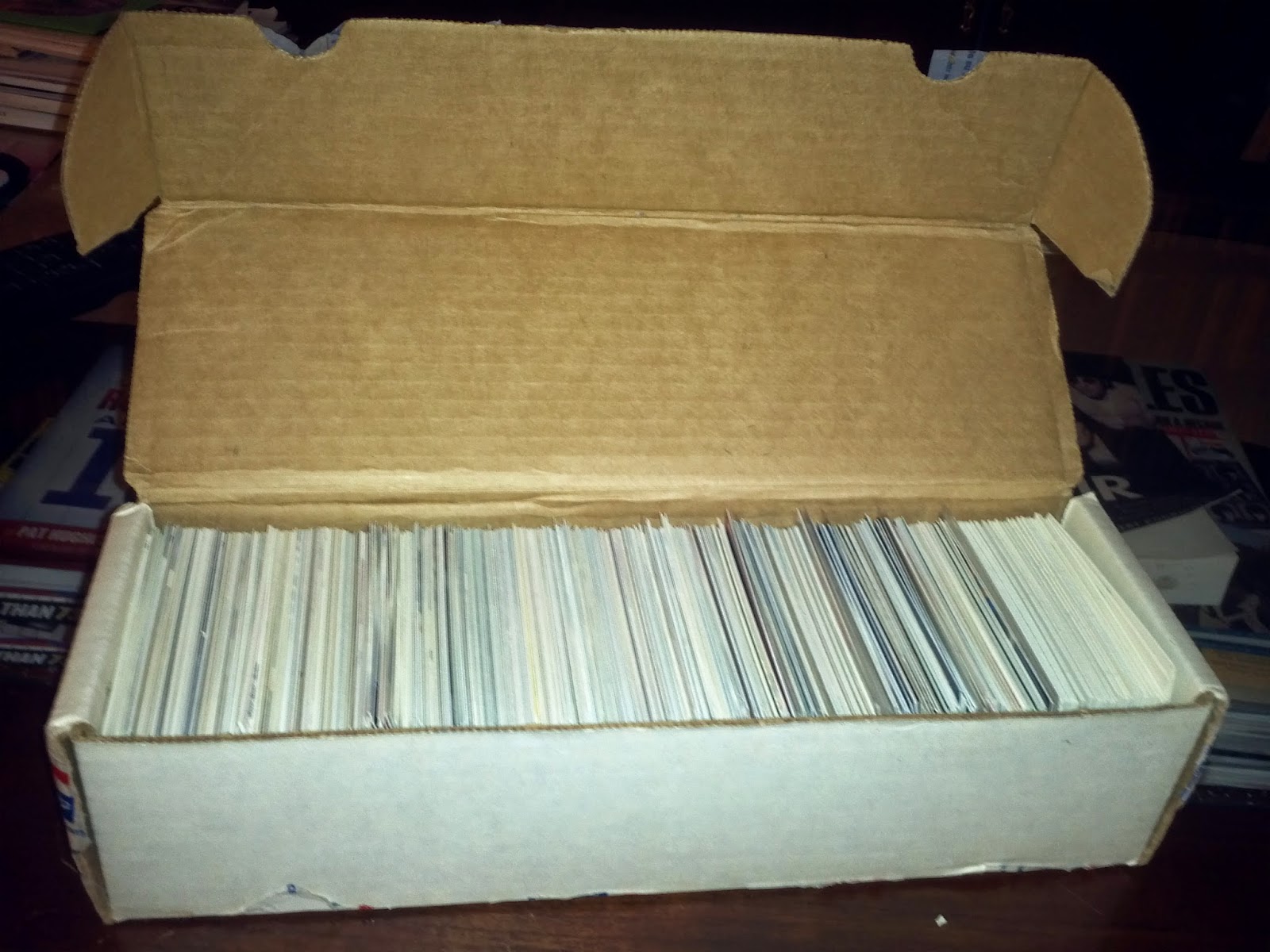 Sometimes, I wonder if I'm doing enough for the blogging community.

I try and write as much as I can to keep my faithful readers satisfied, but I think there's more to being a successful blogger than that.

Heck, even if there wasn't, I haven't blogged in the past two days due to other conflicts. Because I'll be on my way to the Indians-White Sox game by the time you read this, I could've left this blog dormant for a third day. But that would've been unacceptable.

Another reason I'm feeling a little insecure is because I haven't mailed out anything to my fellow bloggers in a couple weeks. I don't have the money to send a lot of packages out at the moment, but I'd still like to ship a little something in the mail every so often.

On top of that, I'm still way, way behind in my trade posts. It bothers me that I have so many awesome packages that haven't yet seen the light of day on this blog. I'm getting to them, I promise.

Even with all that, people still find it in their hearts to send me great cardboard on a regular basis. Some say my writing is enough in return, but I'm not so sure about that.

Take this recent blogger box, for instance. My buddy Jeremy put together one of the best trade packages I've ever received with this one. I highlighted his new custom-based blog in a post not too long ago, and he started a second one not too long after that.

In the time since I received this box from Jeremy, however, I was sad to see that he deactivated both of his blogs. I hope he's still around the blogging community, because I really want him to see just how appreciative I was of this magnificent blogger box.

That should teach me to get my trade posts done sooner. 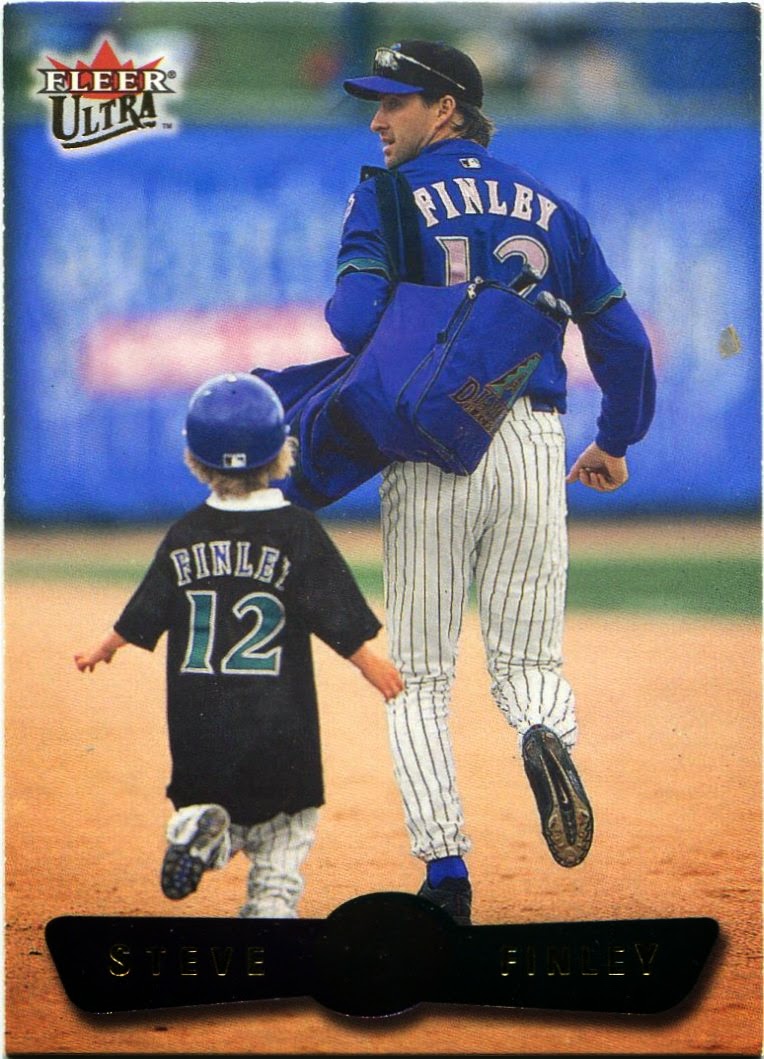 Perhaps more important than any of the cards he included, however, was the fact that I could tell he put a ton of time and effort into carefully selecting the perfect package.

He found so many, in fact, that this wound up as a rare two-part trade posts. And the first part, which you're reading right now, will be entirely exclusive to my mini-collections. A good third of the box hit on a number of my different themes.

I guess it's fitting that Jeremy included this fun "cards with kids" mini-collection hit.

After all, I felt like a kid in a candy store digging through all the gems he put together for me. 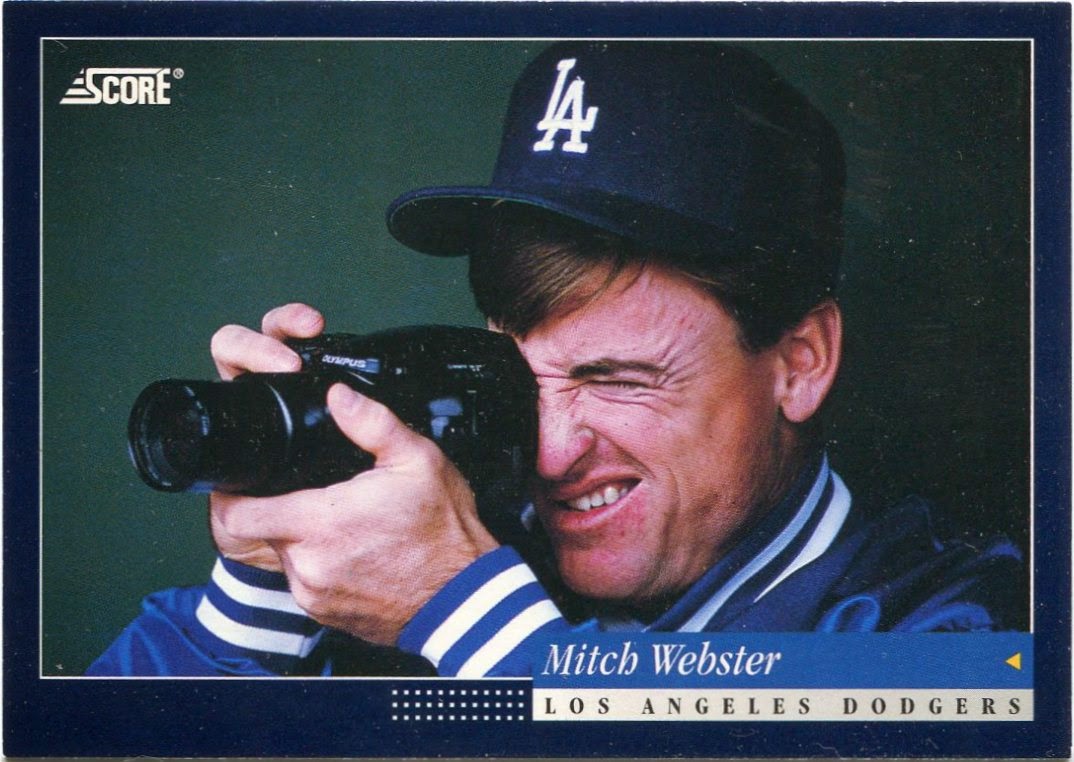 Also present was this cool "behind the camera" need.

I still can't believe how many of these are floating around out there. 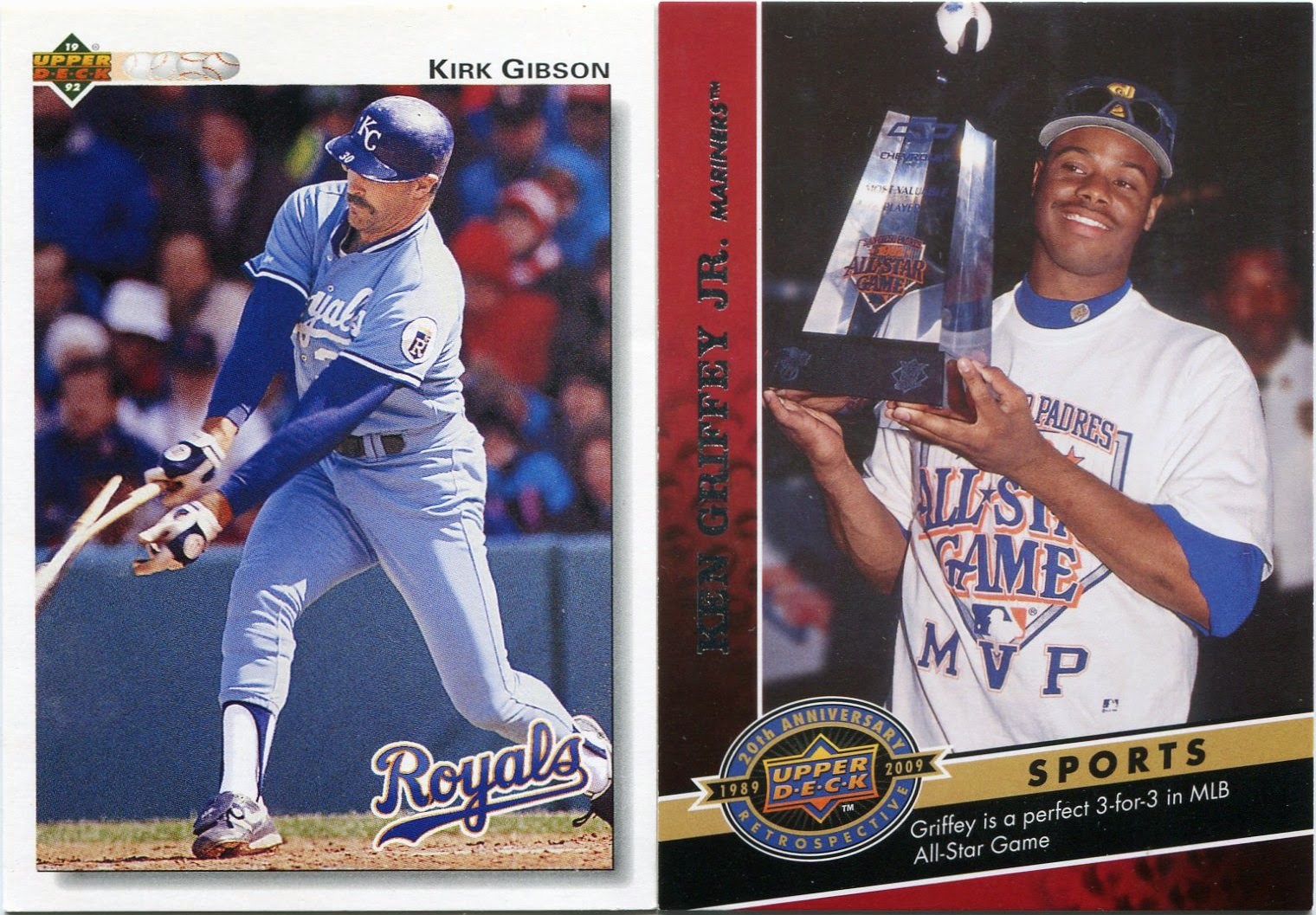 Mr. Griffey was just hitting his prime when he took home that 1992 All-Star Game MVP trophy. 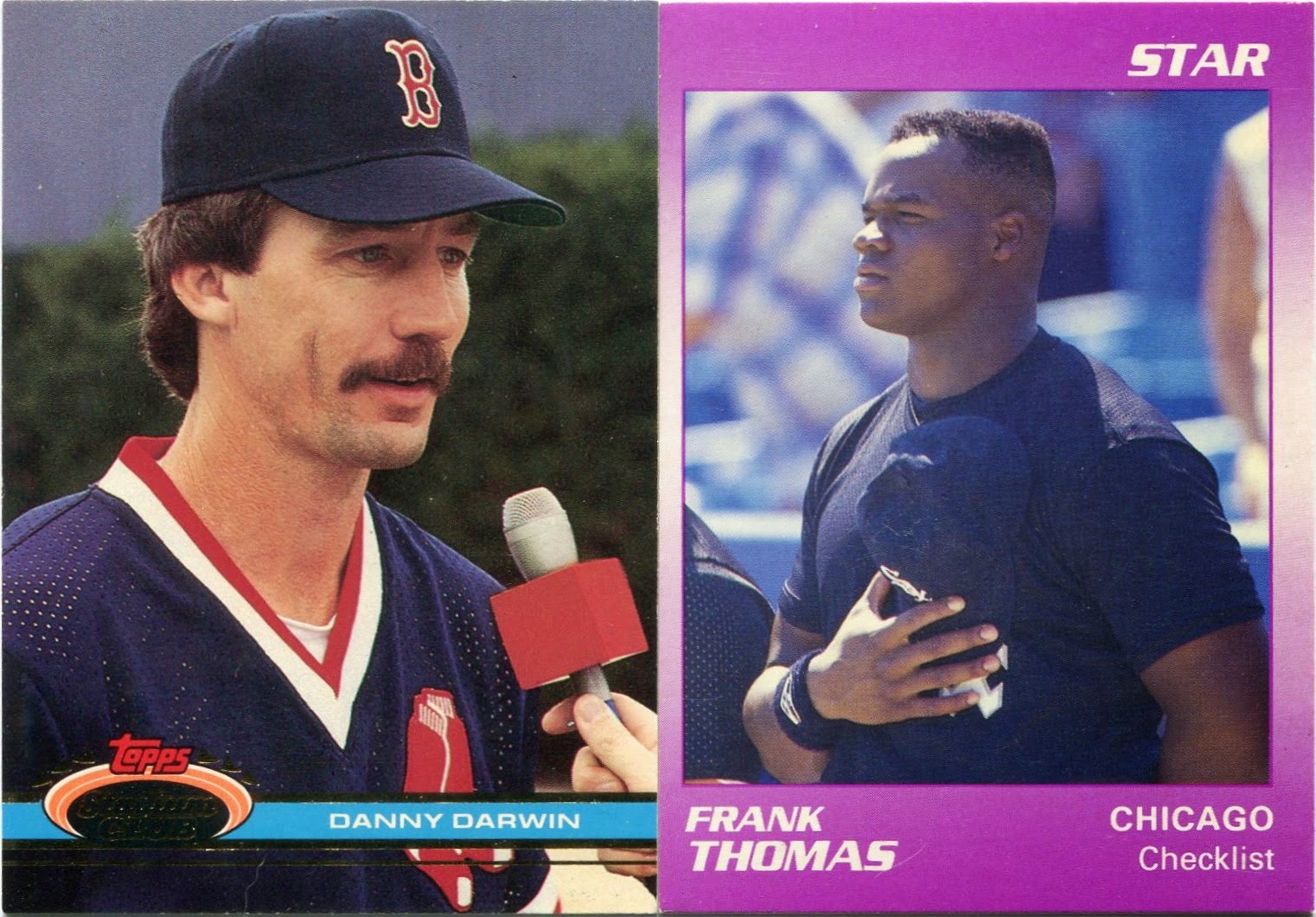 I love a good "interview" shot, but I'm already amazed at the flow of "anthemic" cards I've received lately.

Those didn't become an official mini-collection until recently, yet many of my fellow bloggers have already done a great job of bolstering my new theme.

Plus, it's hard to go wrong with pink-bordered cards. 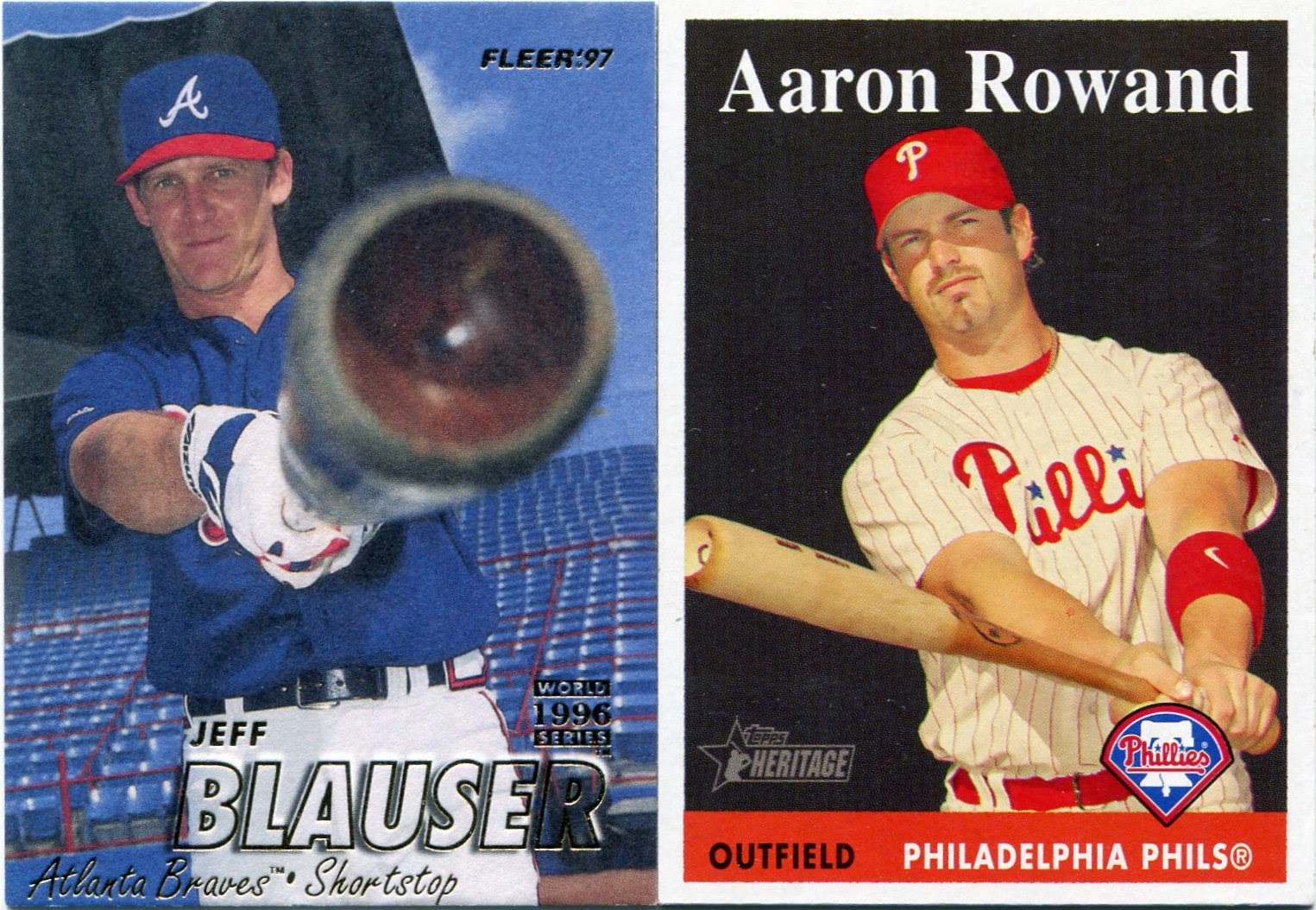 While it may seem like an odd mini-collection at times, the awesomeness of that Blauser reminded me of why I started chasing these things in the first place. 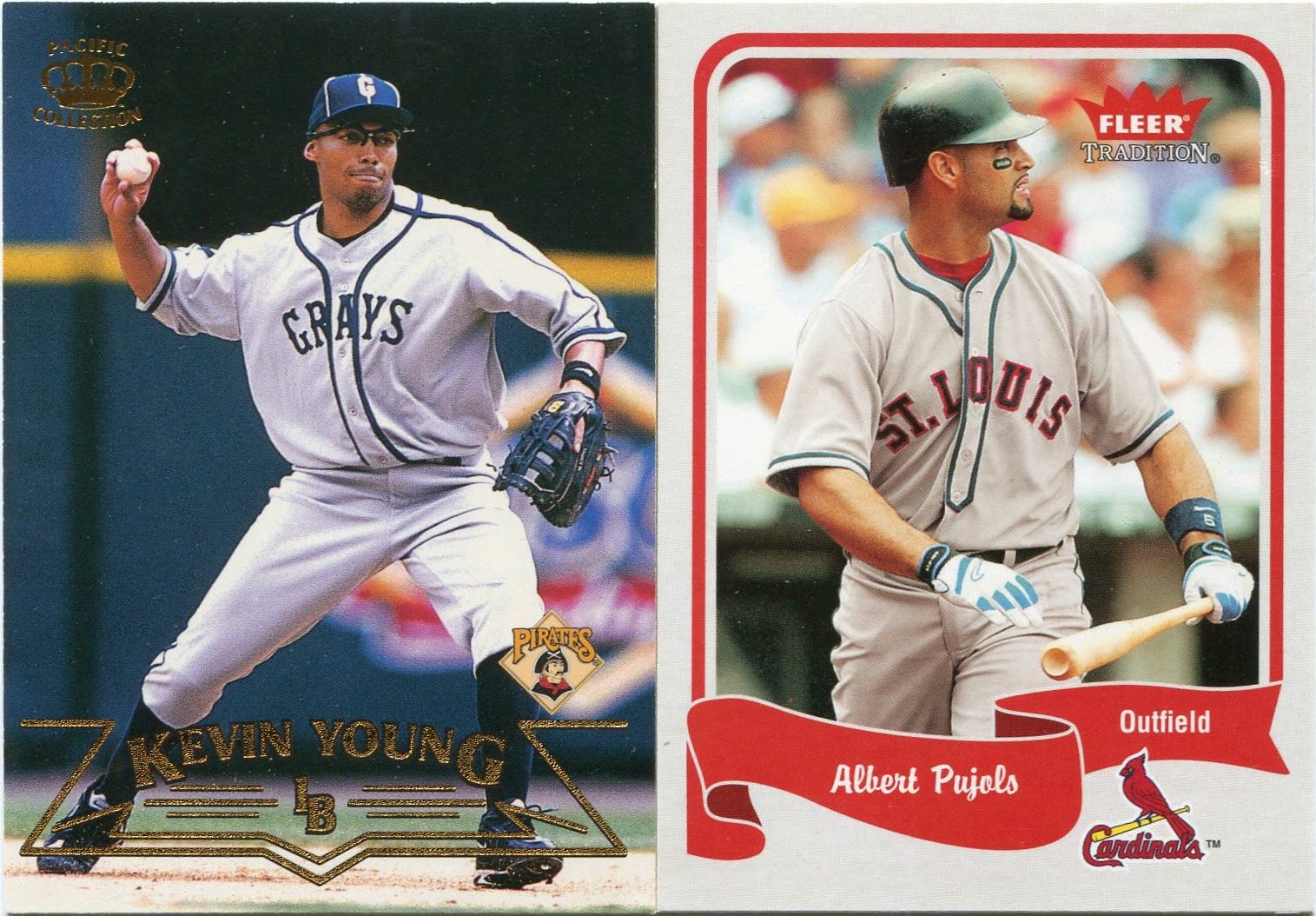 Throwbacks will forever be the basis for one of my favorite mini-collection themes.

Grabbing as many retro-themed cards as possible has been a quest of mine for as long as I can remember. I don't care whether the jersey is from 100 years ago or ten years ago.

I want them all. 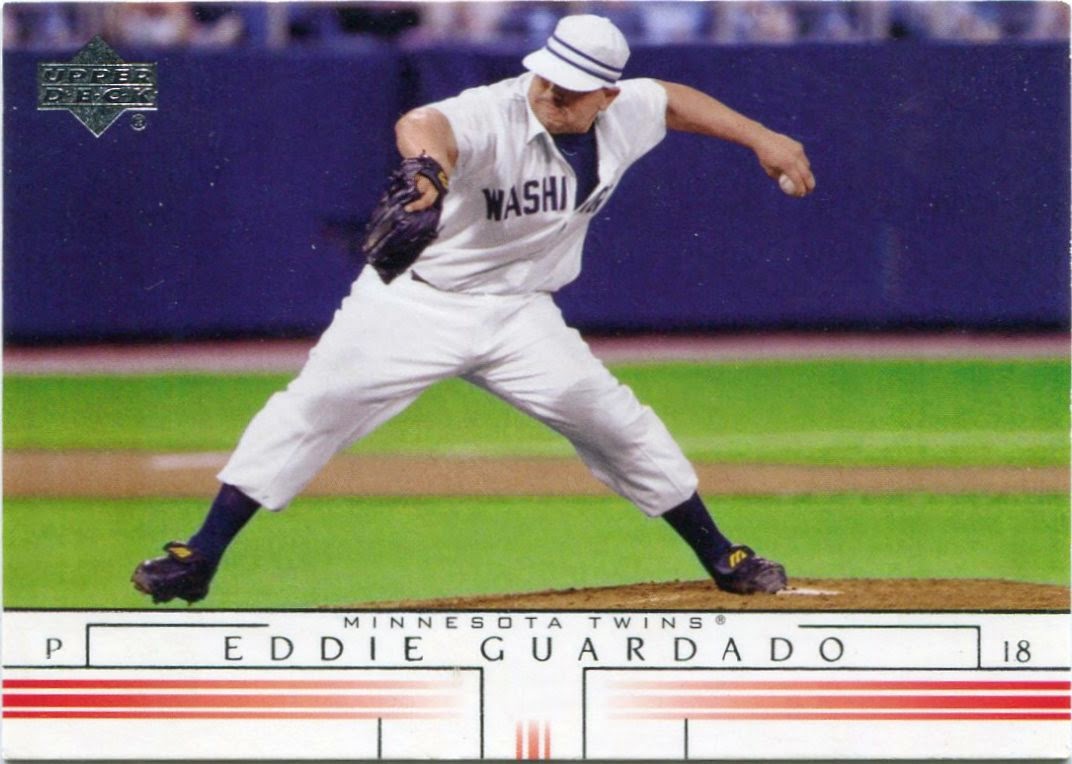 Like any mini-collection hit, though, not all throwbacks are created equal.

Mr. Guardado and his epic Senators jersey kicks the tar out of a lot of other throwback hits I've found in the past.

Needless to say, it was one of my favorite surprises from Jeremy's blogger box. 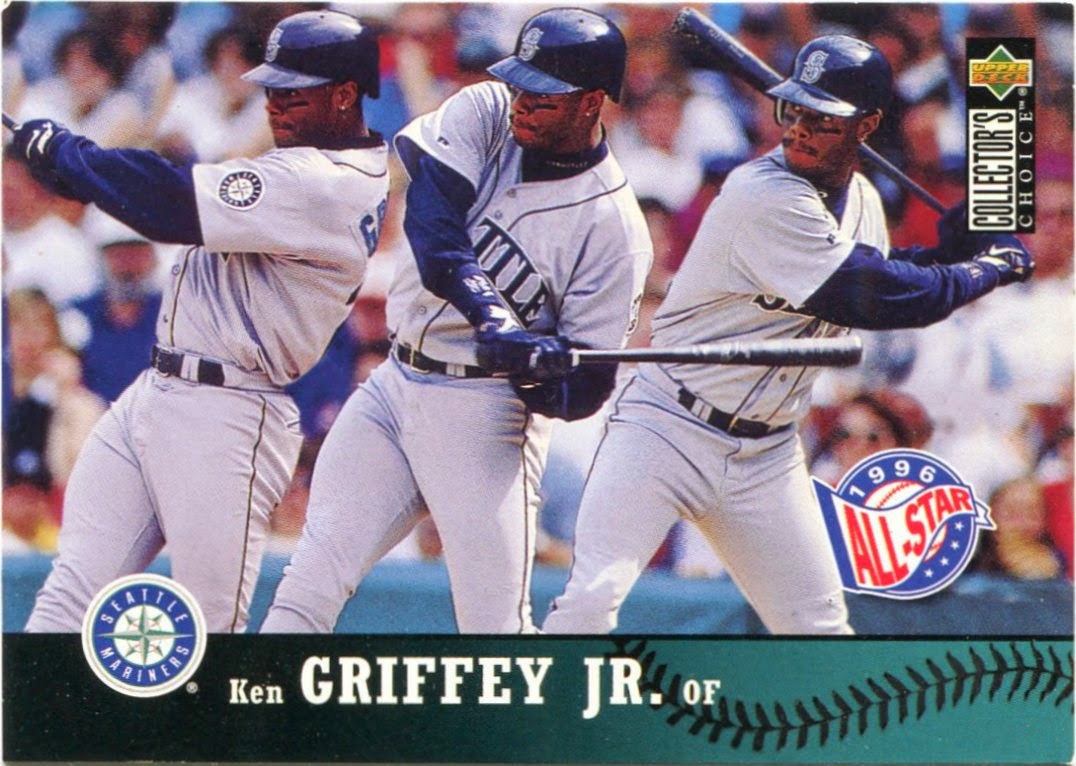 I'd actually been plotting to make this one a "Dime Box Dozen" need for a while now.

As it happens, Jeremy knocked it out not long before it was slated to pop up on the sidebar of this blog.

"Junior" has had a lot of cool cardboard in the past, but this terrific multiple-exposure piece takes its place near the top. 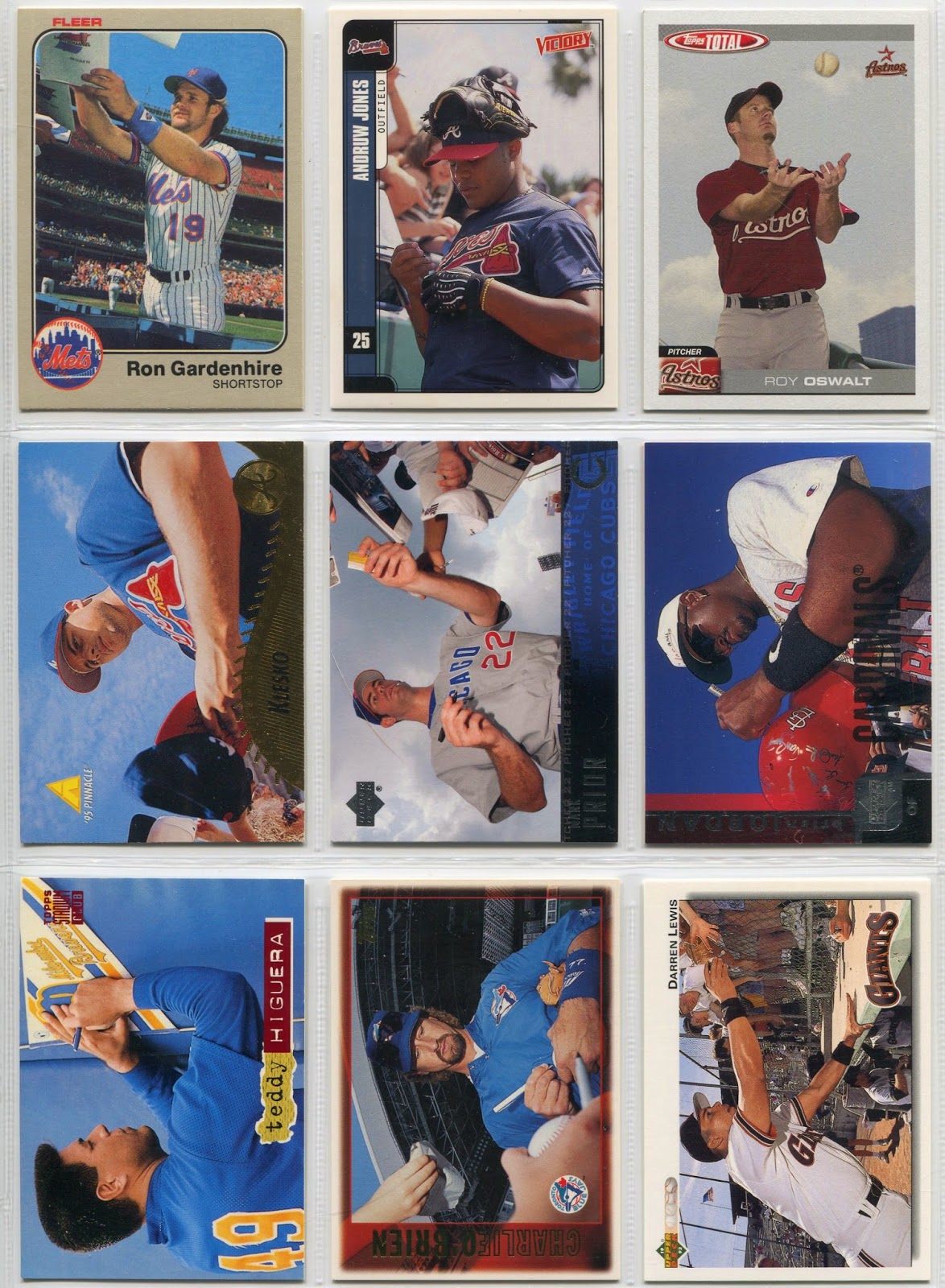 While I agree with that, who's to say that one can't have quality and quantity? Just look at this trade package for proof.

I'd never seen this many terrific "autograph" hits in one place before Jeremy came along. 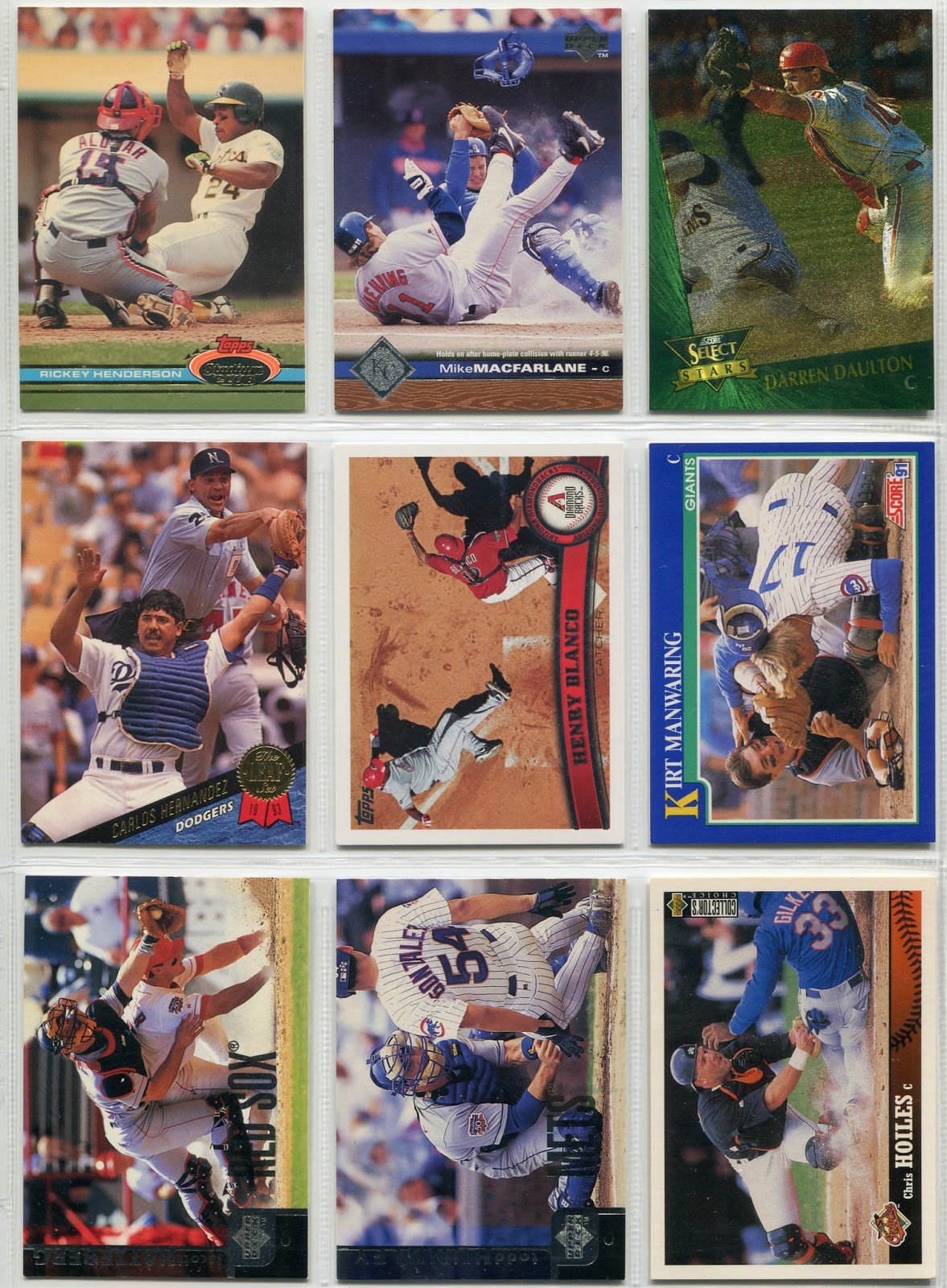 Jeremy easily filled up a page of "plays at the plate" as well.

I can't imagine a more well-rounded batch of PATPs than these.

It's a perfect mix of horizontal and vertical cardboard. With names like Rickey Henderson and Darren Daulton, this page has a little star power as well.

Also present are cameos from Sandy Alomar Jr., Mark Grace, and even a pitcher with the late Geremi Gonzalez.

I'm especially fond of the centerpiece of this page.

That Blanco is the only bird's-eye "play at the plate" shot I've ever seen. 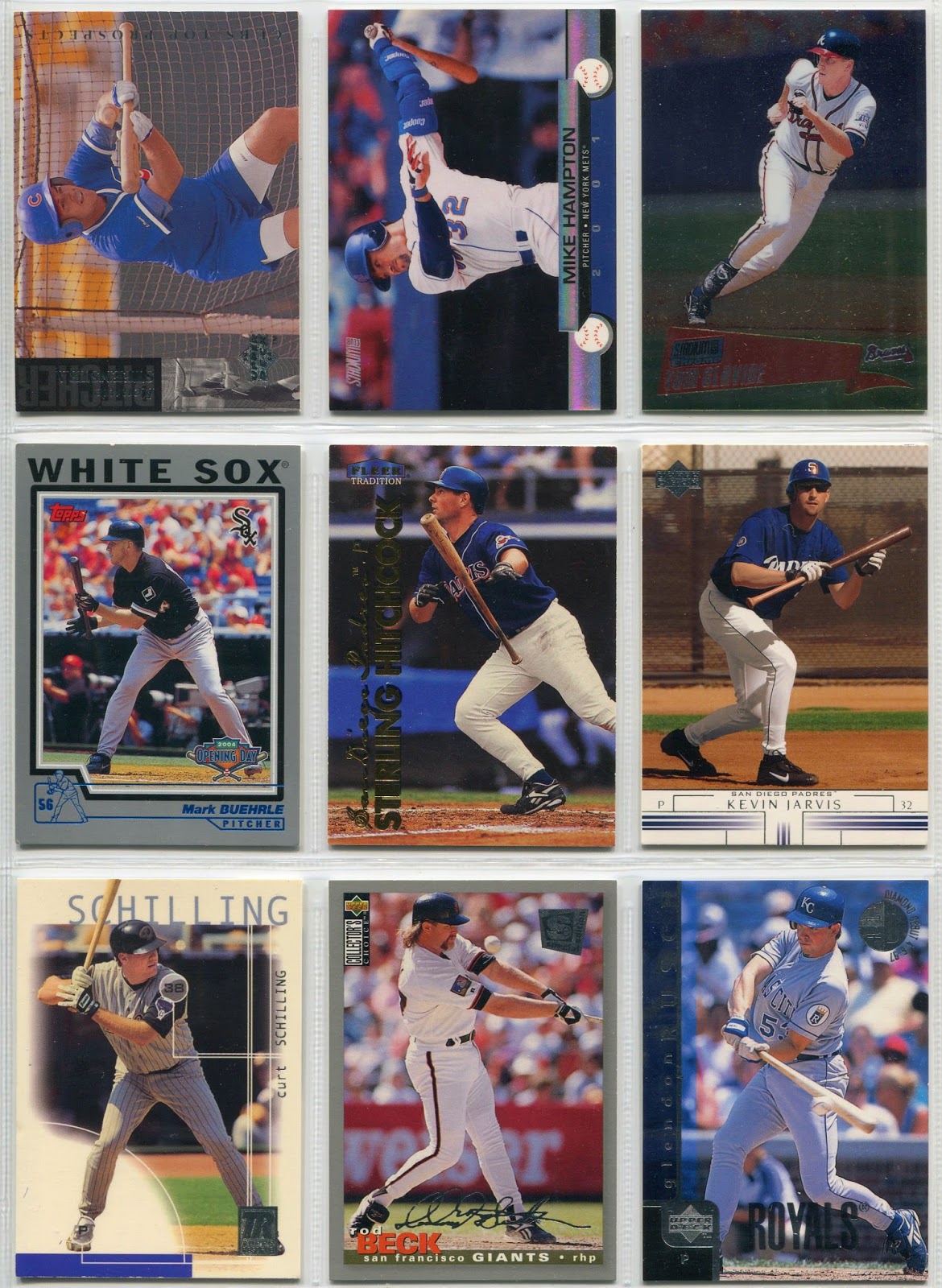 Jeremy managed to find an impressive bunch of "pitchers at the plate" as well.

As you might be able to tell from the sets featured here, the '90s and early 2000's were the prime era for cards like these. 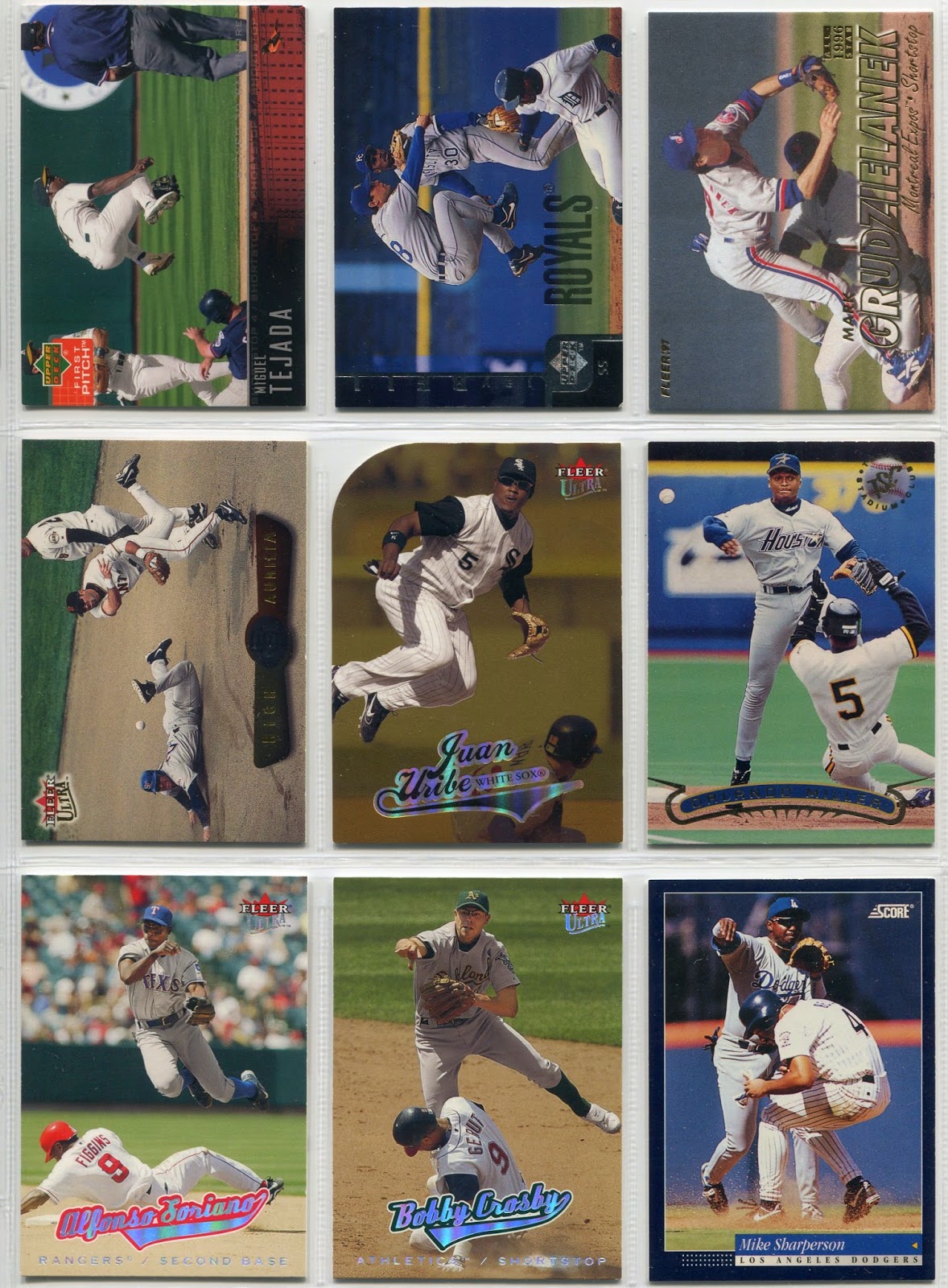 The most striking aspect of this blogger box, however, were the "double dips" I received from Jeremy.

As evidenced by the fantastic shots seen here, he hit a home run with the quality of these things. Look at all those awesome double plays.

But, if you're a quality type of person, Jeremy had you covered as well.

If this isn't enough "double dips" for your viewing pleasure... 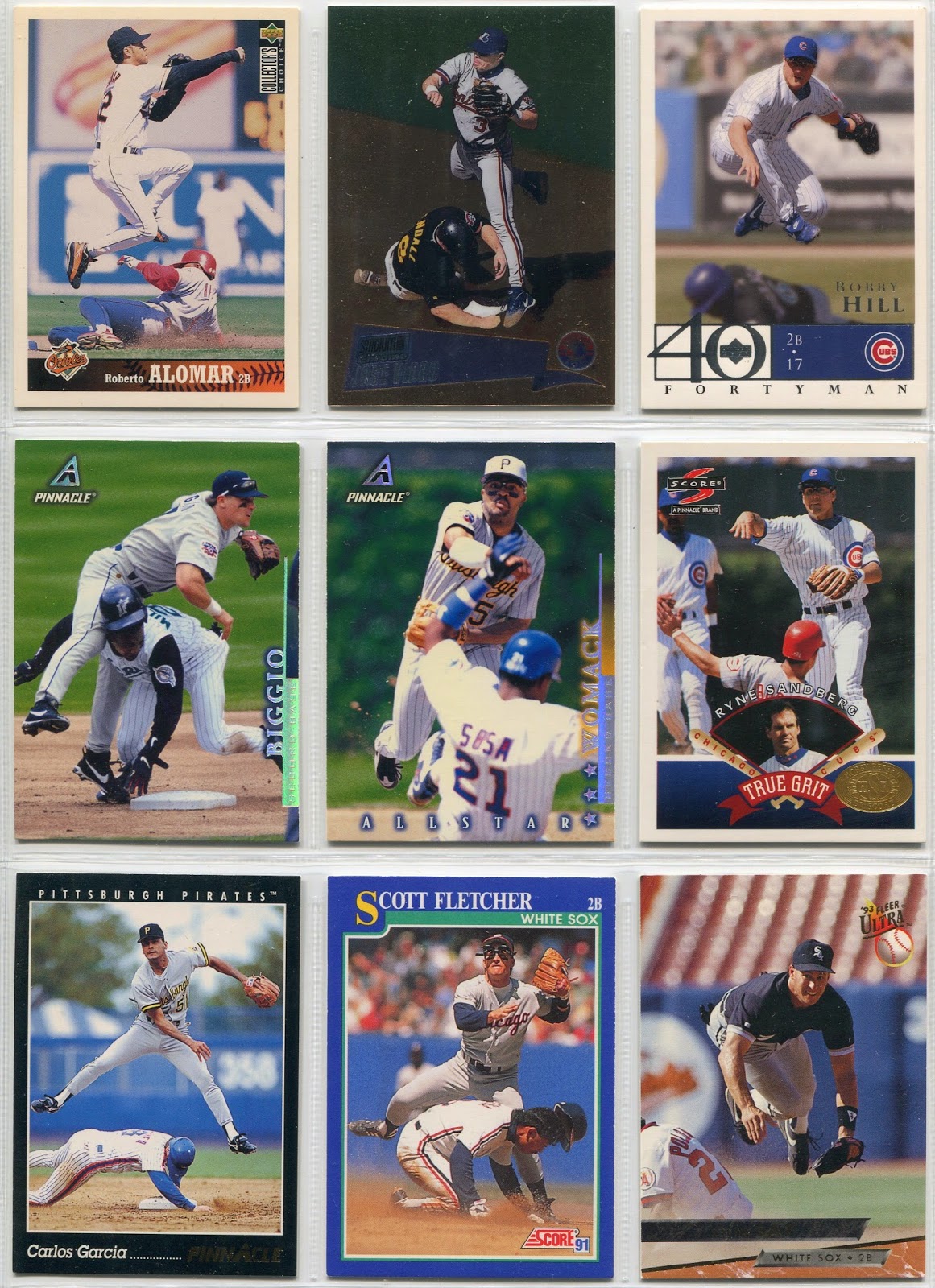 ...here's nine more to tide you over.

Believe me, these were barely a fraction of all the double plays Jeremy found for me. 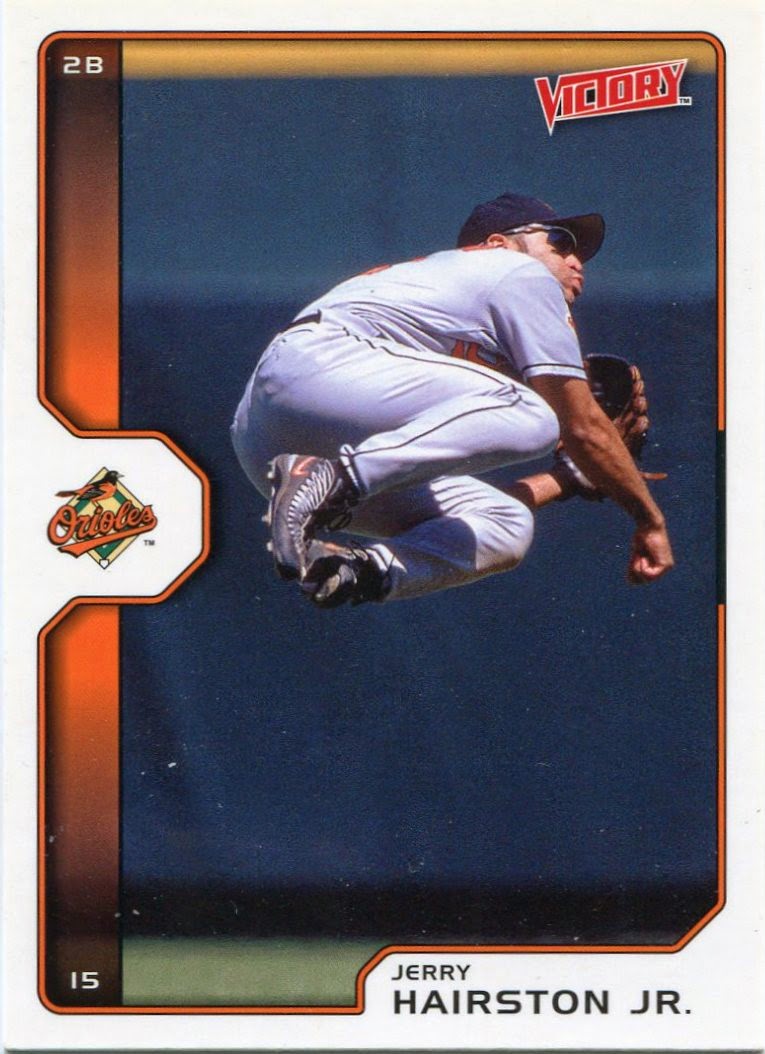 This was perhaps the most fascinating one.

I'm not even entirely sure that it's a "double dip" shot, in fact. I'm only assuming it is based on Hairston's leap.

Though it didn't really hit me at first, I quickly came to realize that this is one of the strangest baseball cards I've ever seen.

The fact that Upper Deck managed to find a midair shot of Hairston basically scrunched into a ball is an accomplishment in itself. Him being the only one in the frame makes it even more amusing.

It's a fitting end to the mini-collection madness that Jeremy unleashed on me.

I've been at this blogging thing for over two years now. In all that time, however, I've never received a more amazing assortment of mini-collection hits.

And, believe it or not, this is just half of the goodies that Jeremy sent along.

I'm greatly appreciative that amazing batches of cards like these still consistently wind up on my doorstep.

I still don't think I'm deserving of it, though.
Posted by Nick at 5:30 PM