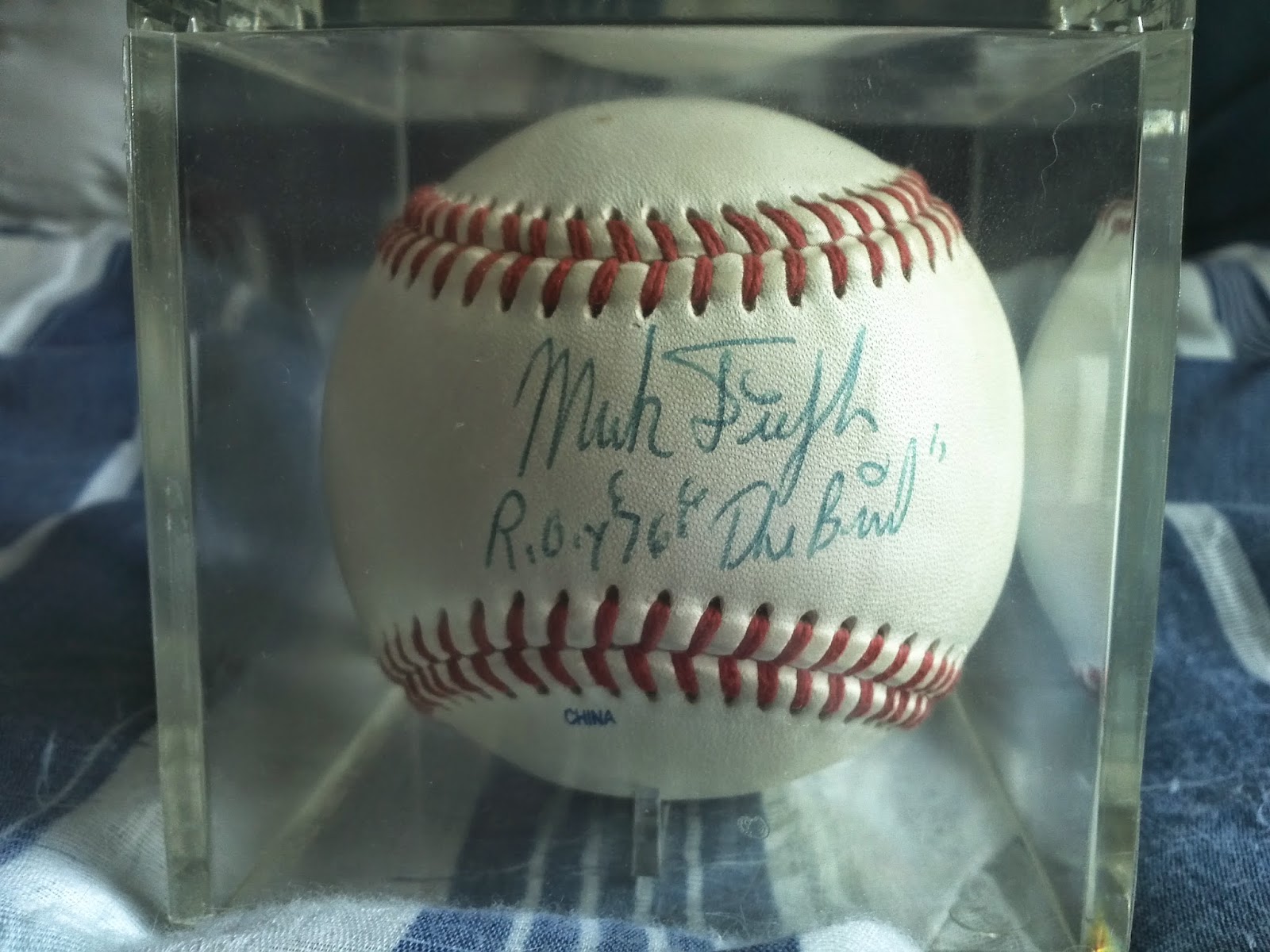 Although he only had one masterful season in the bigs, the man they called "The Bird" has become one  of the more iconic figures in baseball history.

His antics, style, and dominance on the mound won the hearts of fans all across the country in 1976.

Being on the younger side of things, I never got the chance to see "The Bird" play. However, my dad was a devoted ten year-old baseball fan during the peak of Fidrych-mania. As I started to get more and more interested in the game, my dad passed his favorite memories of the man down to me.

Thanks to those tales, I feel like I was there with everyone else in '76. I feel like I've seen Fidrych play. Thankfully, I had the unbelievable fortune to meet the man.

In what may have been the first card show I ever attended, my dad and I stood in line for a good while to meet Mark Fidrych. I was ten years old at the time, and I remember every second of it.

When I handed him my baseball to get signed, I got to see that infectious smile that made him such an icon. He did the same when autographing my dad's copy of Rolling Stone magazine with "The Bird" on the cover.

That baseball is and will always be one of my most prized possessions.


As you might guess, my love and appreciation for "The Bird" has carried over to my card collection as well.

So, in remembrance of Mark Fidrych, I thought I'd count down my five favorite cards of his this afternoon. 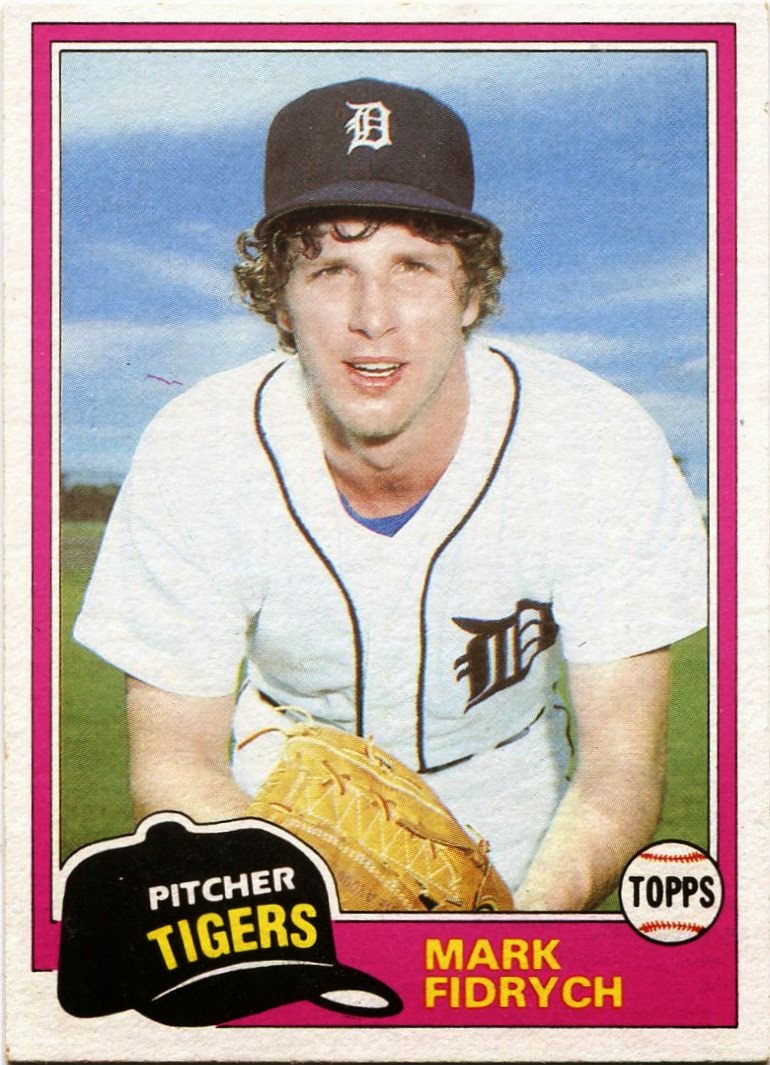 I'm not sure, but this could've well been my first Mark Fidrych card.

I probably had it before I met "The Bird", which means it's been in my collection for more than a dozen years by now.

By 1981, Fidrych was a shadow of his former self. Arm injuries made his legendary '76 season a distant memory.

The nine games he pitched in 1980 would be the final contests of his career. As a result, this is Fidrych's "sunset" card.

Though it was released just five years after his rookie season, "The Bird" looks noticeably worn down in this shot. Still, you can still see a glimmer of Fidrych's true colors.

His baseball career may have been over by the time this card hit the streets, but he was still "The Bird". 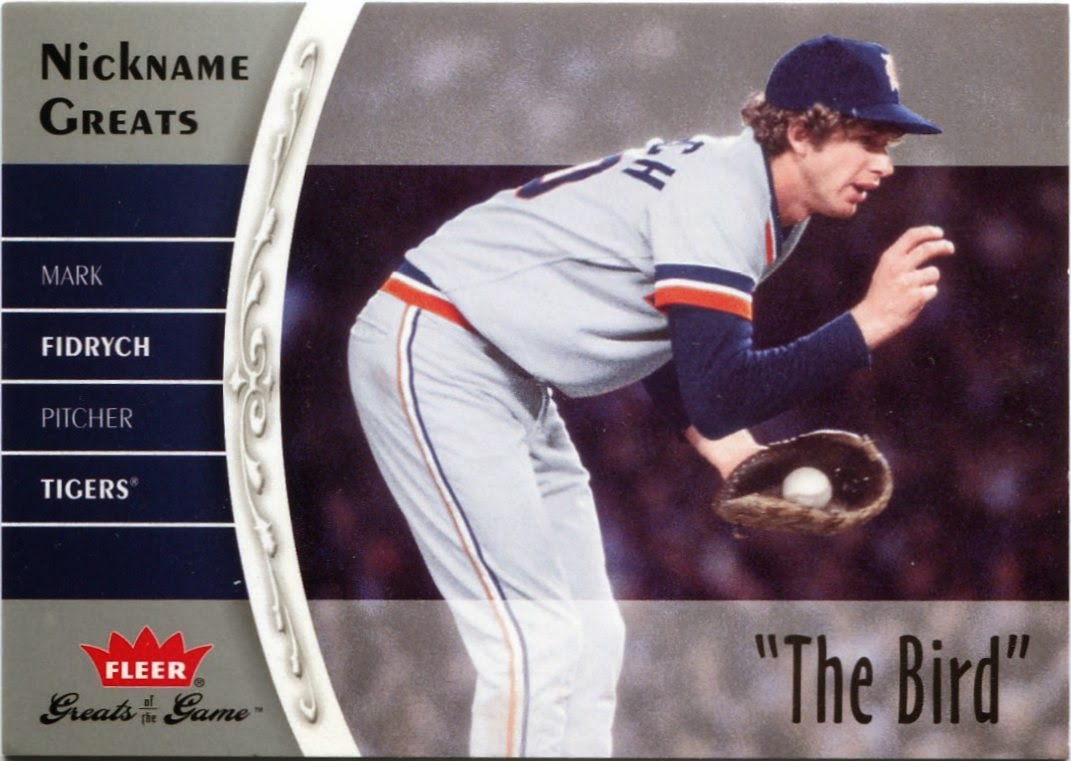 Unfortunately, there haven't been a ton of Mark Fidrych cards released in recent years.

This is one of the extreme few.

I've always thought an insert set of the game's greatest personalities would be a surefire success. Perhaps it'd include guys like Bill Lee or Phil Rizzuto. Or, of course, Mark Fidrych.

Fleer did something similar by including a "Nickname Greats" insert series into their 2006 Greats of the Game release. Thankfully, "The Bird" was one of the main features.

The collector gets a glimpse into Fidrych's tendency to talk to either himself or the ball while on the mound in this shot.

It was just one of the many antics that made him "The Bird". 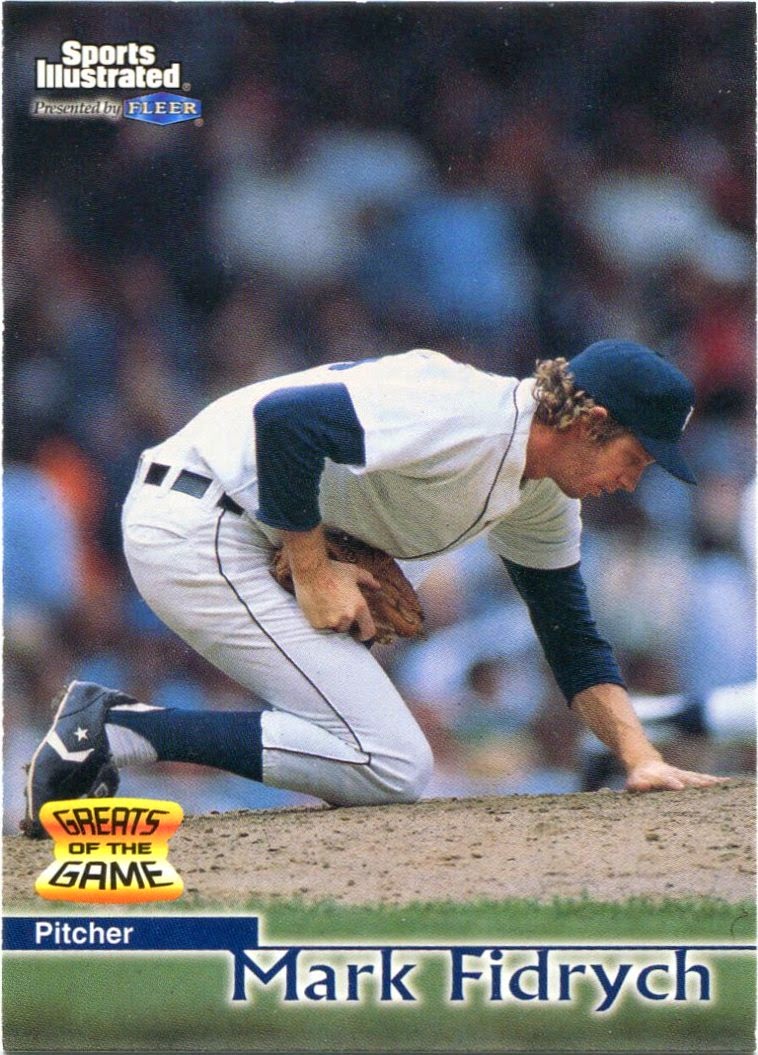 Here's perhaps the most famous of Fidrych's mound antics.

"The Bird" liked to do his own groundskeeping when he pitched. He'd get down on his hands and knees and carefully groom the mound to his liking.

For years, I thought that would've been the perfect image to capture on a baseball card. Little did I know that one had been floating around the whole time.

In one of my greatest discount bin finds ever, I unearthed this beauty from a 12/$1 box at the National a few years ago. The fact that it came in at #3 on my countdown of the "Top 100 Modern Cards" should tell you just how special it is to me.

It's pretty darn close to perfection. 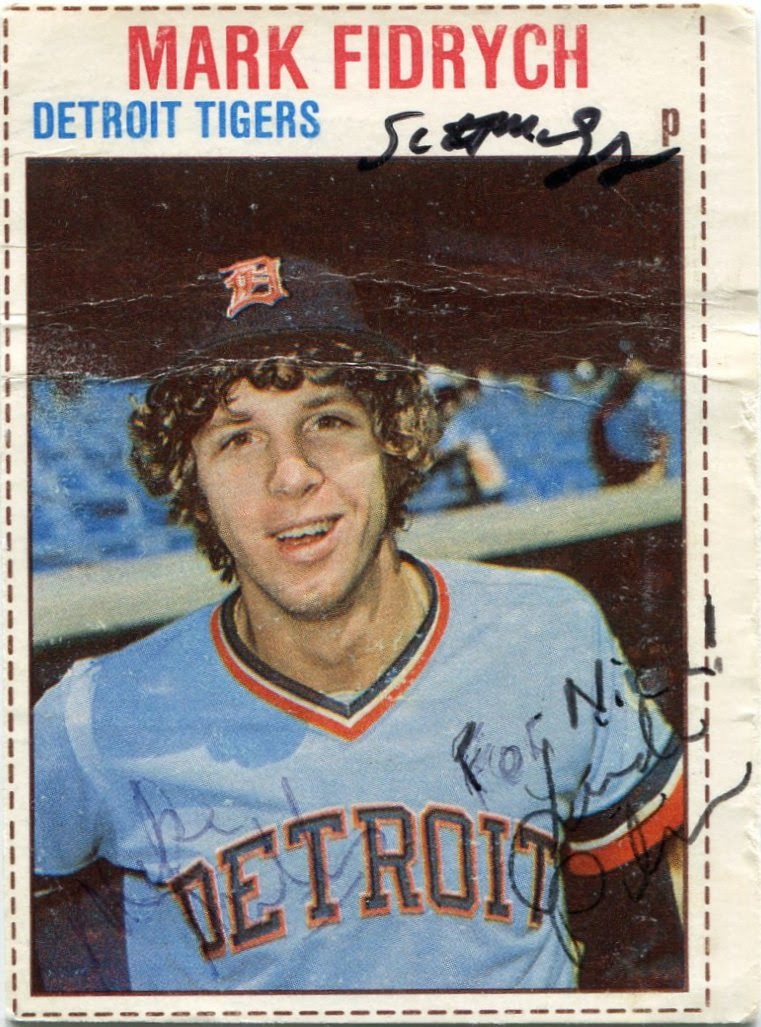 This is truly a one-of-a-kind piece.

I somehow came across a second copy of Fidrych's 1979 Hostess issue at one point. Because my dad is such a huge fan of "The Bird", I gave it to him.

He just so happened to have it in his wallet when he saw The Baseball Project at the Cubby Bear a couple years ago. (I wasn't 21 at the time, so I couldn't go.)

I've mentioned them on the blog before, but The Baseball Project is a terrific band that does all baseball-centric songs. Their tunes cover everything from Dock Ellis, Ted Williams, and Curt Flood. Plus, my dad says they have a baseball card-related song on their new album as well.

As luck would have it, a few of the band's members were lounging around the bar when my dad got there. In a stroke of genius, my dad thought to have them autograph the Fidrych card he had in his wallet.

This card features signatures from guitar player Scott McCaughey (near top), drummer Linda Pitmon (bottom-right), and bass player Mike Mills (bottom-left). I hope to one day get the signatures of guitar player Steve Wynn and guitar/bass player Peter Buck. With Mills, the Buck one would complete the R.E.M. combo.

I can definitively say that I am the only person in the world who owns something like this. 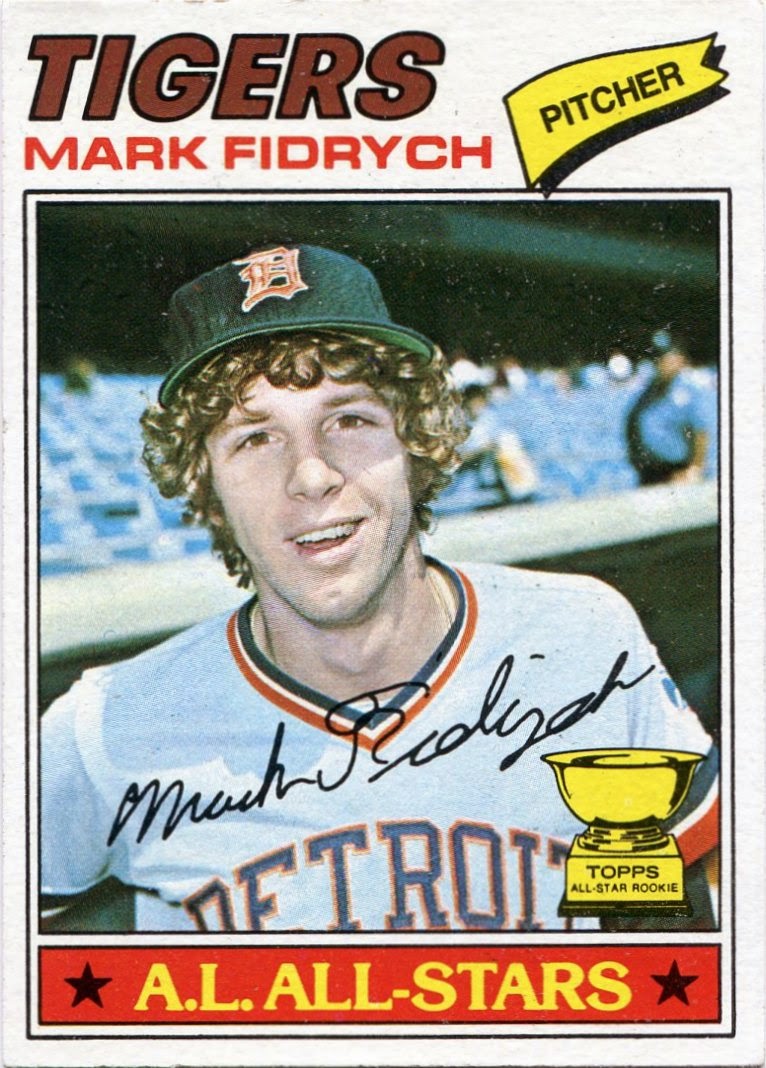 Of course, no Fidrych list is complete without this one.

It is the very definition of the world "iconic". Every kid who collected during the 1970's probably remembers Fidrych's rookie card.

How could you forget it?

Between the legendary Rookie Cup, the golden locks, and that million-dollar smile, this card has it all. I don't know where my collection will be in, say, ten years, but I know this.

This card will always put a smile on my face.

It's the perfect image of "The Bird".

Long live the Bird. That first season was a thing of beauty

Another reason to accelerate my dad-napping plans. That's one cool one-of-a-kind piece. That's what collecting is all about.

Nice,boy....and nice to read about some baseball while I'm in the UK!

I really like that Greats of the Game card... it's very unique, but totally captures The Bird in action.