Spring break in paradise, Pt. 4: I'll be back 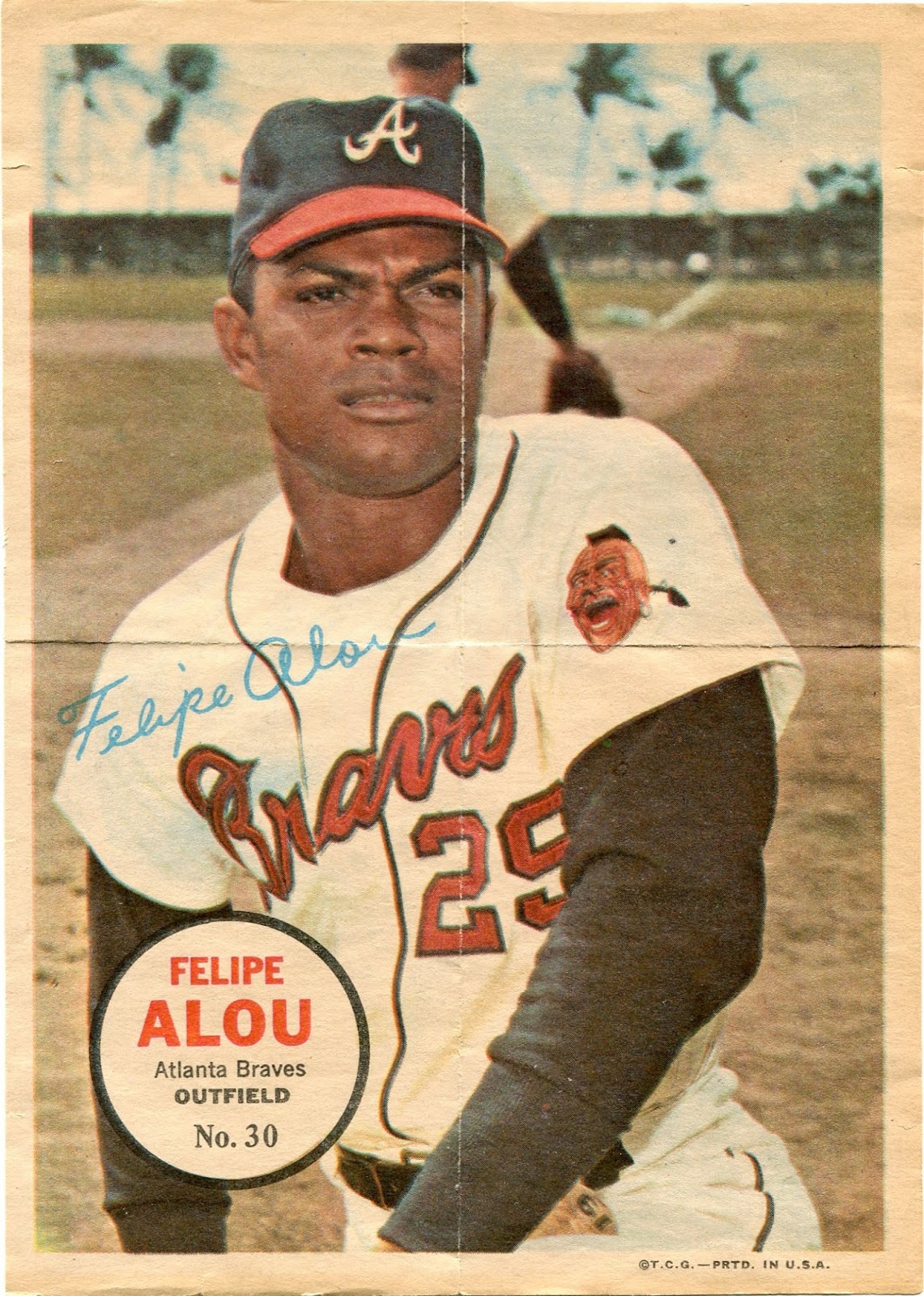 There is such a thing as card show overload.

I'm not talking about too many card shows. That isn't possible. One can never have enough card shows.

No, I'm talking about that moment when you set foot into a show and begin to soak everything in for the first time. As you walk through the aisles, endless barrages of "10 CENTS EACH!!!", "CLOSEOUT SALE!!!", or "BARGAINS!!!" begin to hit you.

I often have no idea where to start at a card show. That's why it's important to have a good first table to break the ice a bit.

At the last couple shows, my dad and I have found that special icebreaker. There's a guy who has an absolutely huge assortment of dollar cards all scattered wildly in a bin. In my stupidity, I forgot to take a picture of the thing on Saturday. That would've been a gem of an image for this blog.

I guess I was too excited to finally be "getting my card show on" (as the kids say) that afternoon.

With my budget, a smart shopper probably would've set a limit of about ten cards from this guy's dollar box. After all, you don't want to blow too much of your cash right away.

At card shows, though, smart shopping sometimes goes out the window. I ended up with 26 great cards after all was said and done, and the vendor graciously only charged me 20 bucks for the lot. The ice had been broken.

One of the first things I unearthed was this awesome 1967 Topps Poster of Felipe Alou. As I've mentioned before, I go absolutely bonkers for anything related to the Alou brothers.

I'm still not exactly sure why. 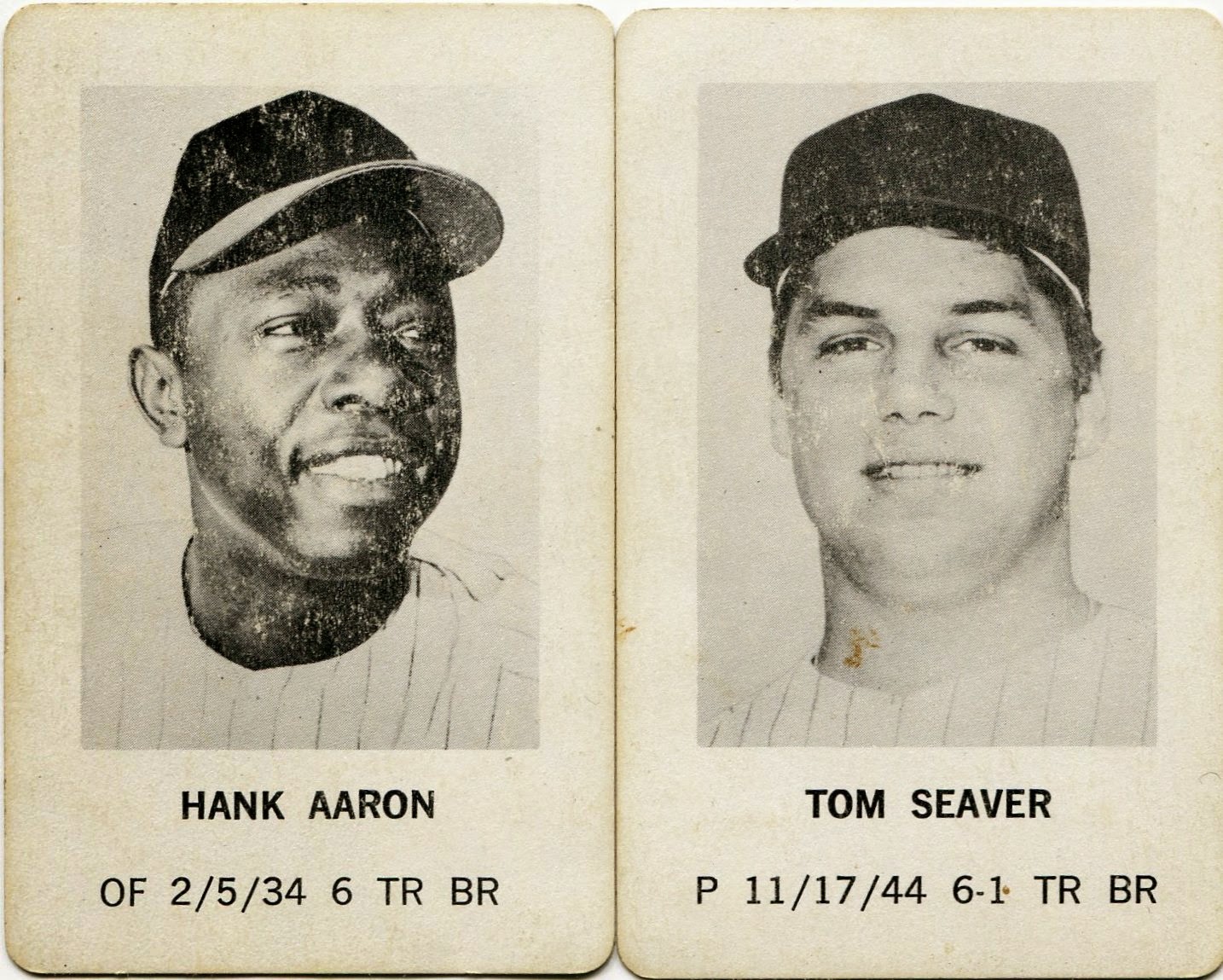 Oddballs are slowly starting to take over my card show experience.

I seem to come home with more and more each time. These two legends are from the 1970 Milton Bradley checklist.

Without early card games like these, future gaming releases like my beloved MLB Showdown might've never been possible. 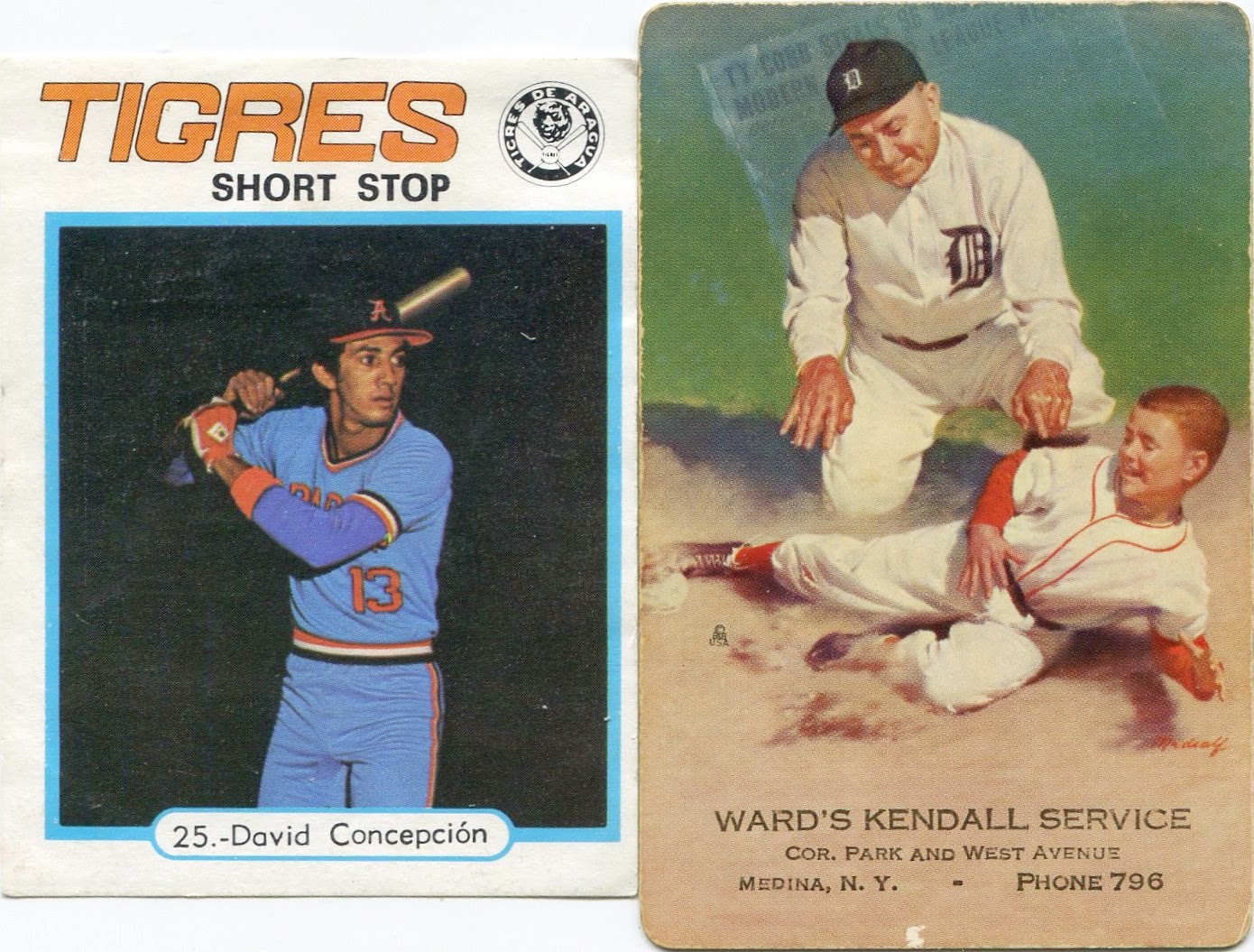 Every so often, I'll find an oddball that leaves me completely stumped.

Two of those fell out of this guy's dollar bin.

The Concepcion is obviously from some sort of Mexican League set. I don't know about you, but I didn't even know things like that existed before Saturday.

It's printed on about the flimsiest card stock imaginable, and the back is completely blank. There isn't a whole lot of hope in finding much more information about Mr. Concepcion.

I tried doing as much research as possible about the issue on the right. It's some sort of playing card, as there's a ten of spades on the back. (Possible royal flush?)

I assume it's fairly old, or at least a reprint of something that was fairly old. Extensive searching came up with absolutely nothing.

Sometimes, though, the best kinds of oddballs are the most mysterious. 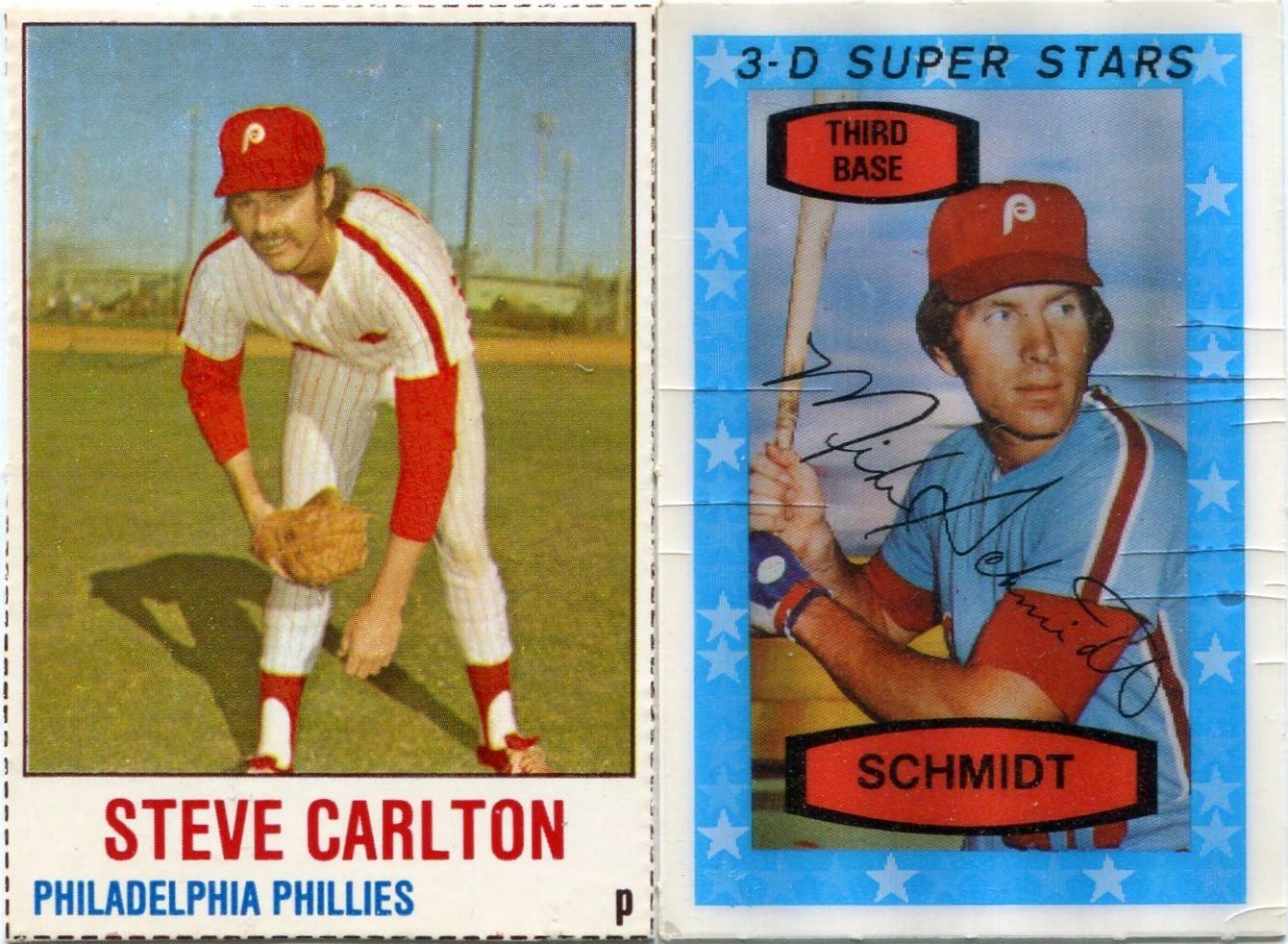 Let's get back to the more familiar oddities, if such a thing is possible.

You probably know the Hostess and Kellogg's brands fairly well by now. 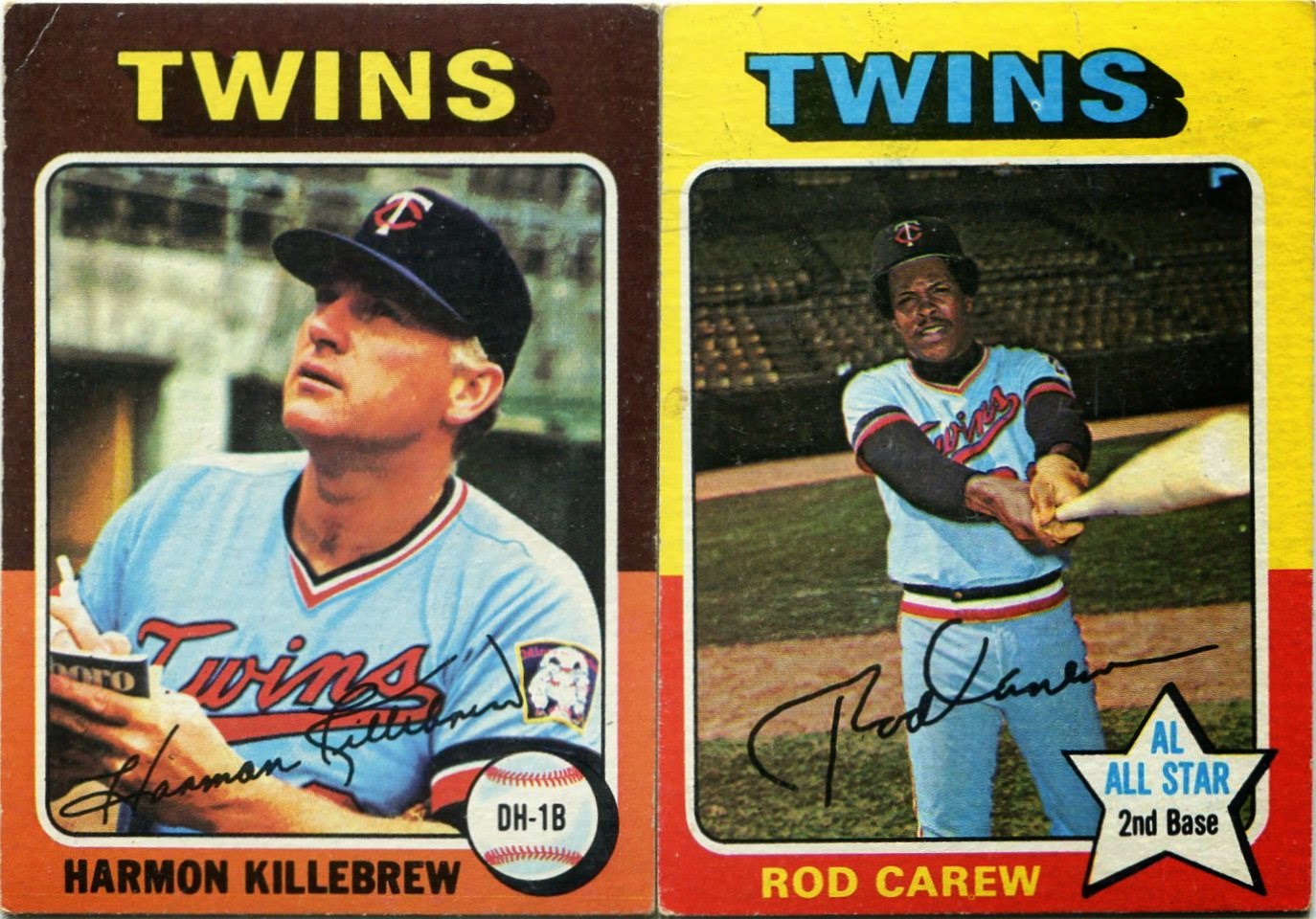 From what I hear, 1975 minis will also be part of that class.

I landed not one, but two of them out of this dollar box. And not just any two, either.

If I were to make a list of my five favorite cards from '75 Topps (as another blogger recently did), these two would most certainly be on it.

I think Herb Washington would be #1, but Killebrew and Carew might well be numbers two and three. The Carew is by far the greatest "bat barrel" card ever made.

With a treasured "autograph" shot, the Killebrew is also a mini-collection hit. But, more than that, it's also his final Topps card.

I'm ecstatic to finally have both in mini form. 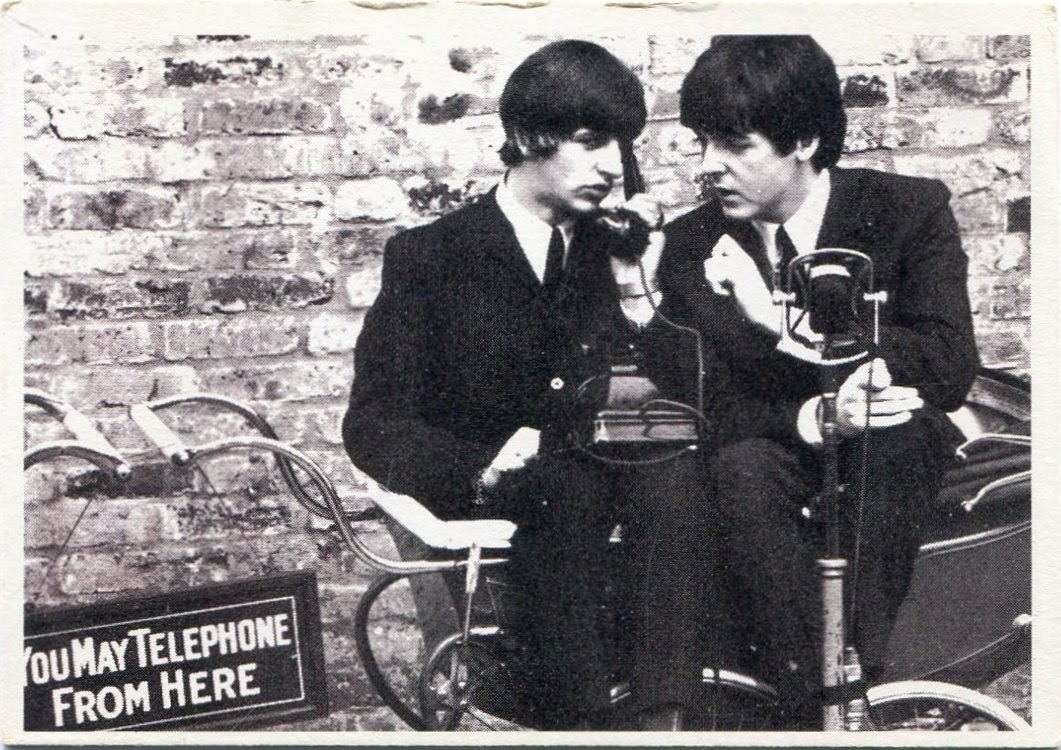 This dollar bin had quite a few shockers in store.

As a diehard Beatles fan and avid card collector, it makes sense that I've long wanted own one of these '60s Beatles pieces.

Well, as I'm happy to report, that dream has come true.

Thanks to some condition flaws on the back, this A Hard Day's Night single became mine for a single dollar. I'm probably one of the few fans who ranks Ringo as their favorite Beatle, so I'm happy to see him featured on this beauty.

Ah, I finally own a Beatles card.

What could be better? 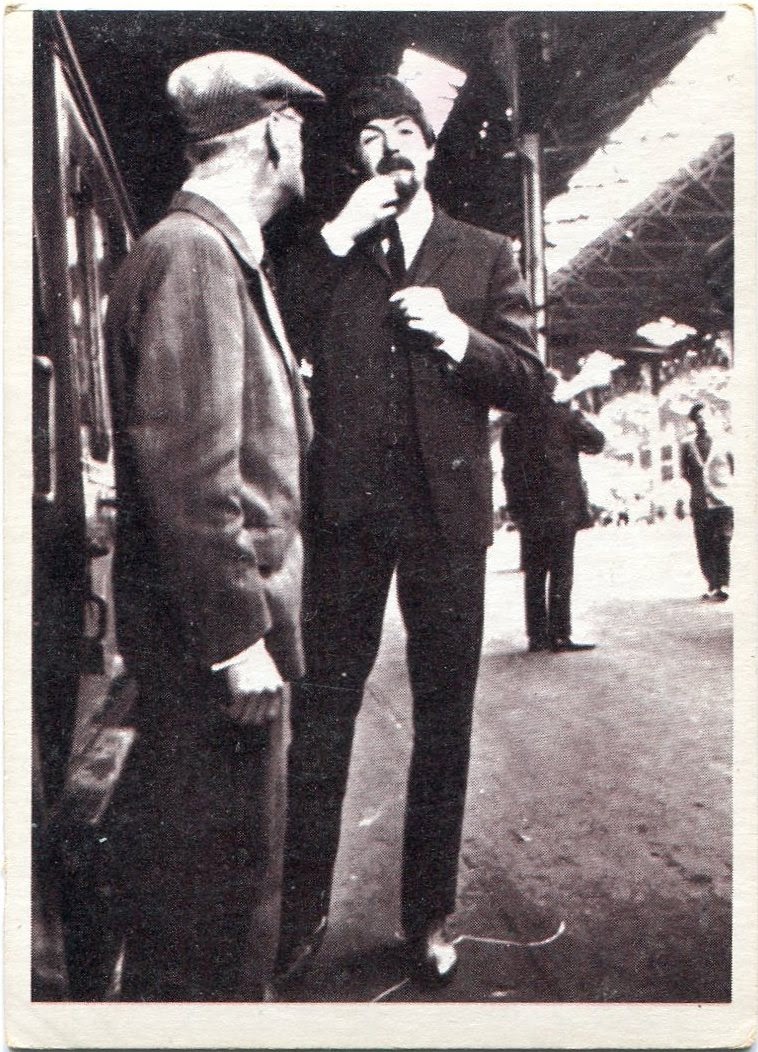 How about a second Beatles card?

This very clean piece also set me back just a buck. It's a still from the memorable opening scene of A Hard Day's Night.

Like the title of one of the more underrated Beatles tunes, I'll be back to this guy's table come the next card show.

For now, though, let's get back to baseball.

These also fell out of this guy's dollar bin. I was sure glad to land them at that price. No, no, not a buck each, dear reader.

A buck for all three.

It was a bit hard to comprehend landing three 1950 Bowmans for about 33 cents a piece. All have obvious condition flaws, but that sure didn't stop me.

From left to right, we have Billy DeMars, Herman Wehmeier, and Mel Parnell. The DeMars was the only one I actually needed, as I somehow hadn't owned a real St. Louis Browns card before Saturday.

I never used to care for early Bowman, but they're slowly starting to win my heart. 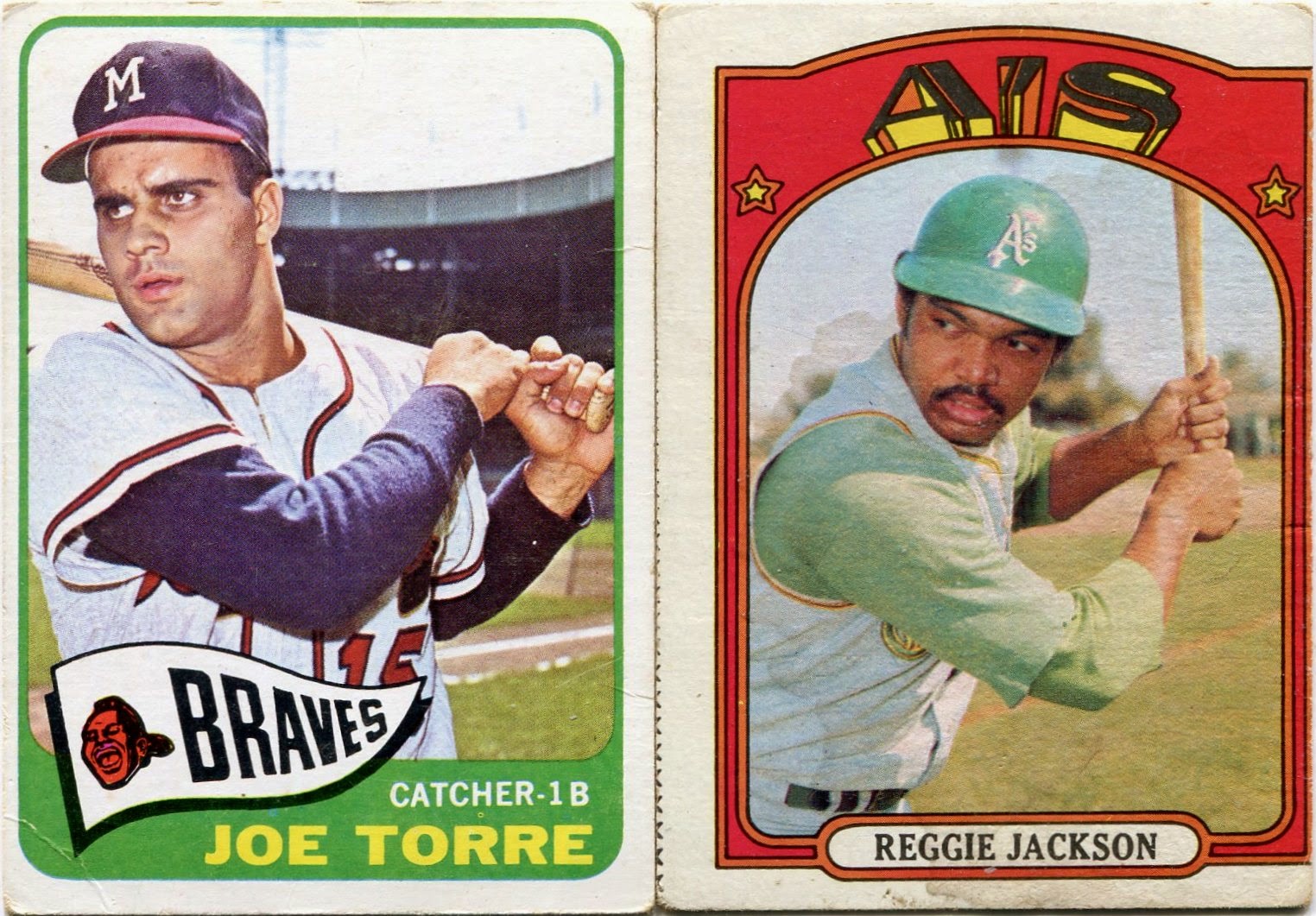 Of course, vintage Topps has always made me swoon.

This spectacular pair also cost just a buck a pop.

That won't be the last you'll hear of Reggie this evening. Even with Beatles cards, minis, and vintage Bowman, however, I'd have to rate this as the best find from the dollar bin.

I've long wanted to pick up a copy of Rich "Goose" Gossage's 1973 Topps rookie, but all the ones I've seen have been just a tad out of my price range. I always hoped I'd find an off-condition one at a show someday.

In yet another fulfilled fantasy, that's exactly what we have here with this miscut gem. I plopped down a wrinkled George Washington for this one without a second thought.

Welcome to the collection, "Goose".

It was long overdue. 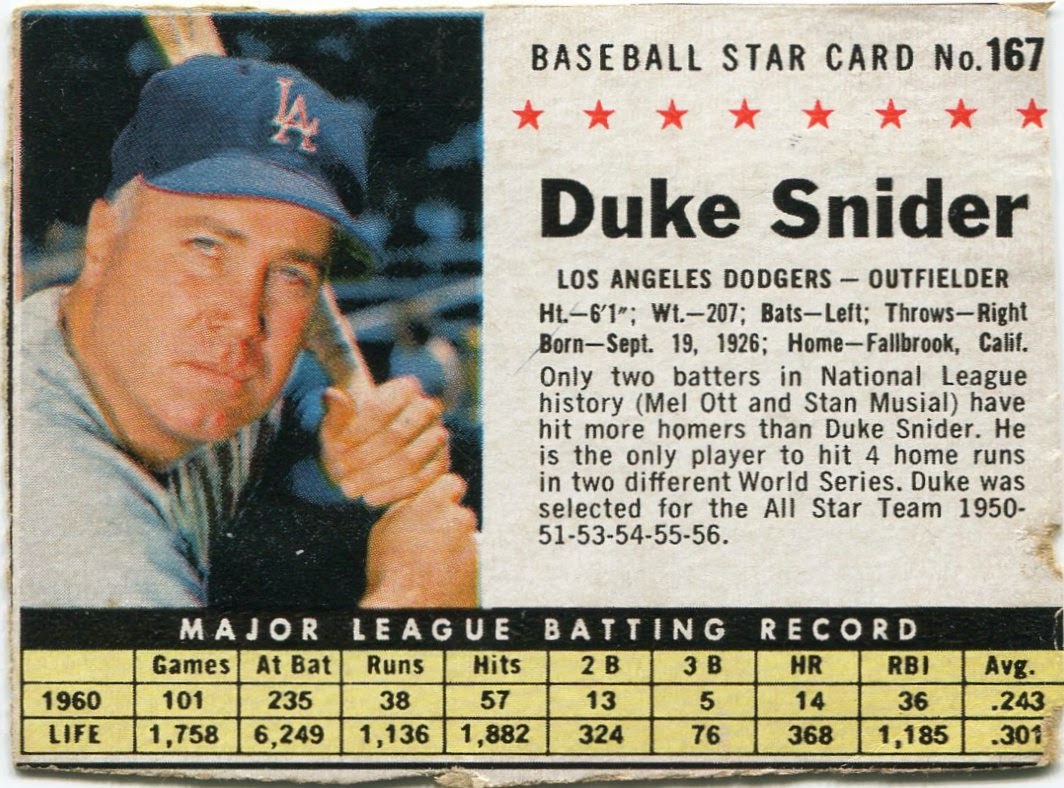 About halfway into the show, I discovered yet another vintage bargain box.

I think I only walked away with five cards from this table, and two of those were for other people.

Despite what you might think with my 200-card dime box conquests, however, it's not the quantity that matters. It's the quality.

I certainly made my three "keeper" cards count.

This terrific Post oddball of "The Duke" set me back a paltry buck. 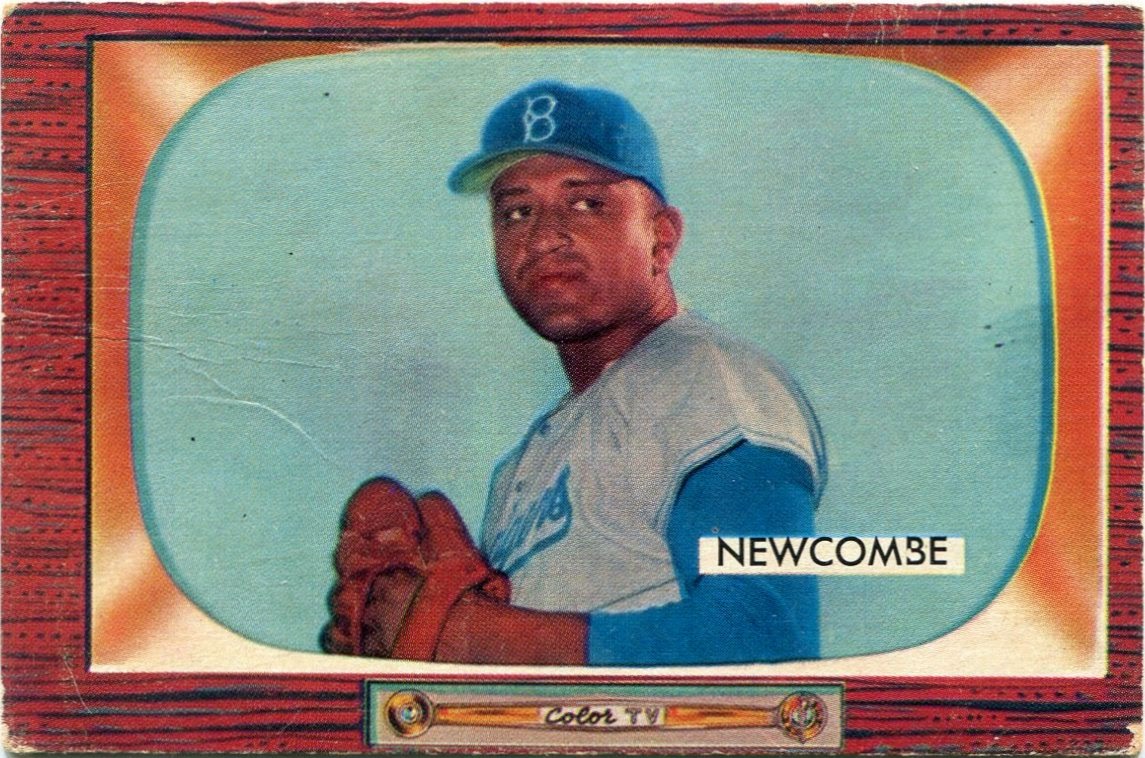 I went back and forth on this one a few times.

At just three bucks, I knew I was going to buy Mr. Newcombe no matter what. The only question was whether I'd keep it or send it to one of the gazillion Dodger collectors around the blogosphere.

In the end, I decided I just couldn't part with such beauty.

My apologies, you Dodger fanatics. 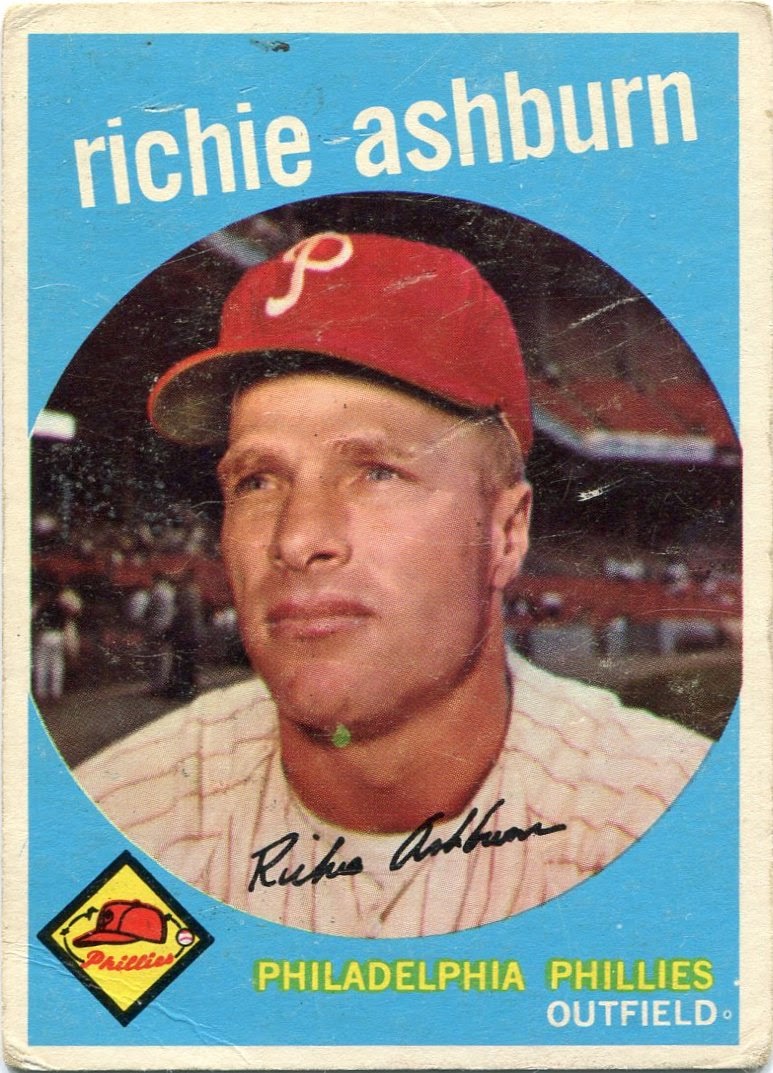 This was probably the best find from this guy's table.

As the owner of arguably the best baseball name in history, Richie Ashburn has always been a personal favorite of mine. I've made it a point to track down as much cardboard as possible of the Hall of Famer.

After all was said and done, I deemed this one to be unquestionably "Wall-worthy". 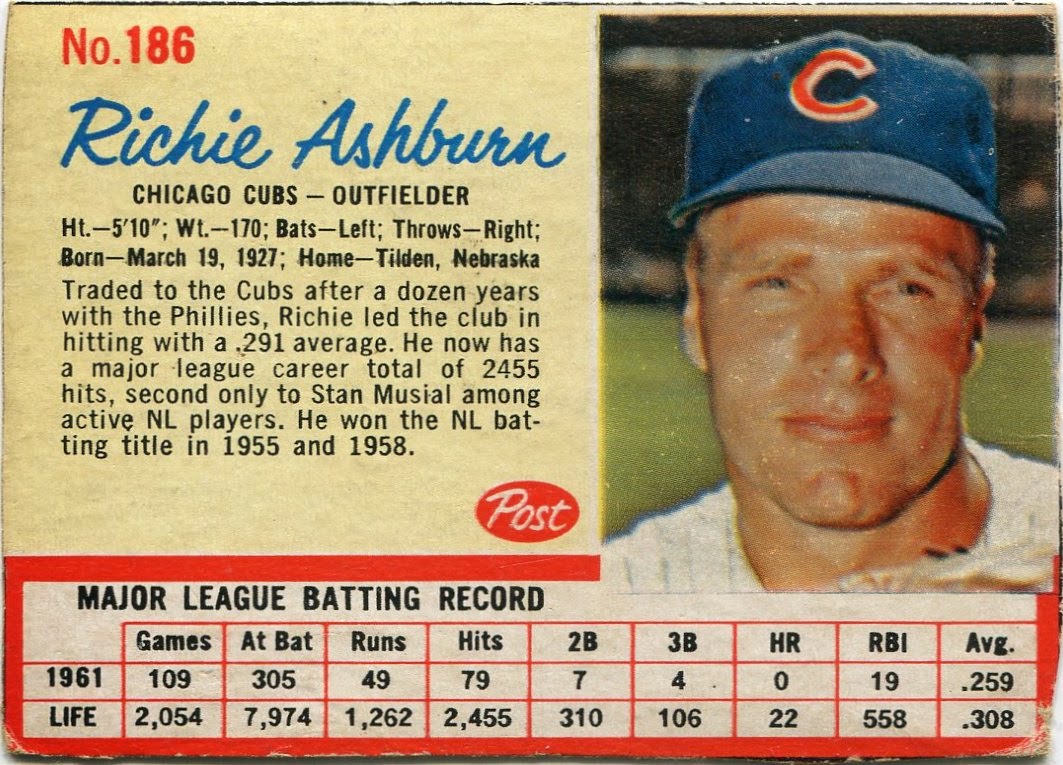 I wasn't done with Mr. Ashburn just yet.

The last table I'll be recapping in these card show posts had a couple little boxes of scattered cardboard, fresh for the picking. My dad helped me out with this one, pulling a few cards he thought I might want.

The above Post Ashburn was one of the treasures he selected.

At two bucks, I couldn't say no. He also scoped out this Kellogg's Ron Santo for just a dollar. 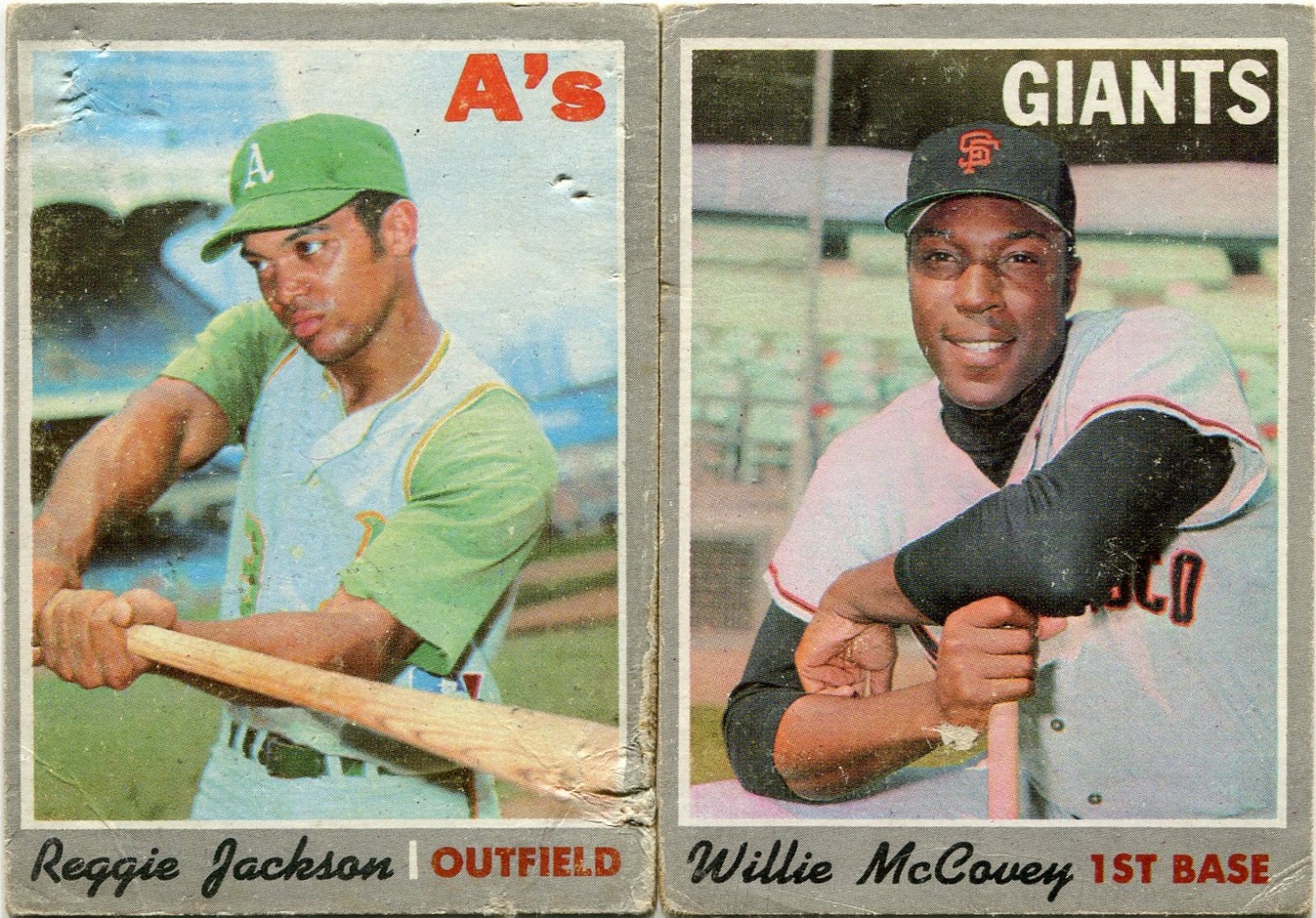 My dad actually bought the OPC version of Willie McCovey's 1970 Topps issue for me this past Christmas.

I guess it's fitting that he found the standard Topps version of the very same card in this bargain box. At just a buck, my dad helped bring my McCovey collection full circle.

Reggie Jackson has always been a favorite of both mine and my dad's. Picking up anything of his is a virtual no-brainer for that very reason.

With the '70 Topps issue you see above and the '72 Topps I featured earlier, I now own every single Topps card of "Mr. October" apart from his iconic '69 rookie. Though it's a dream to complete Jackson's "Topps set" one day, I don't see it happening anytime soon.

Still, at three bucks, this nifty '70 Topps single did bring me one step closer.

In fact, it was tied with guys like Newcombe and Ashburn as my most expensive purchase of the day. 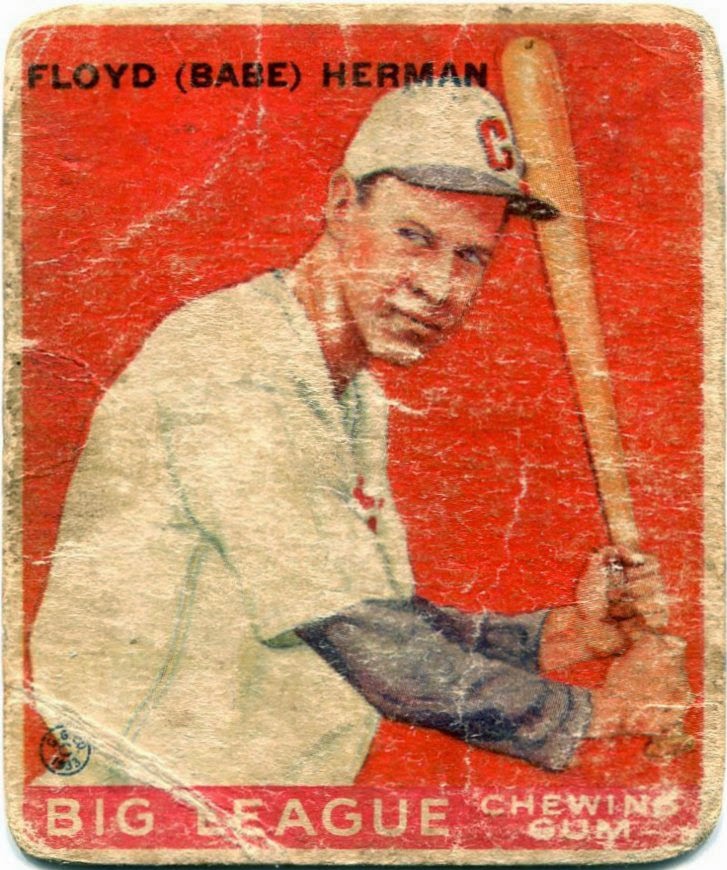 Nick, I thought you said your most expensive cards were three bucks?

Yes, they were. I wouldn't lie to you. Mr. Herman here was indeed priced at a mere three dollars.

I was as shocked as you are.

This vendor actually had quite a few 1933 Goudeys in the three-dollar range. Most of the ones I found were no-namers, though. Still cool, but I thought there had to be a halfway decent name somewhere in the pile.

I didn't know it at the time, but I was holding out for Babe Herman. Though he's probably not a household name, a lot of more passionate baseball fans know who he is. A .324 career hitter, Herman is one of three players to record three cycles. (The others are Bob Meusel and John Reilly.)

Though I certainly never thought I'd own a real card of Babe Herman, I couldn't be happier with this purchase.

It was my find of the day.

There's no doubt about it.

As usual, I'd like to give one huge heartfelt thanks to my dad. Just like he's done throughout my entire life, he was at my side through all four hours at Saturday's show. Without his generous grant, chances are I wouldn't have been able to afford the likes of Gossage, McCartney, or Herman.

Today just so happens to my my dad's birthday, by the way. A fitting end to what has been an immensely fun card show recap.

Thanks for everything.
Posted by Nick at 5:30 PM

Dave Concepion was the shortstop for Big Red Machine of the 1970's - I think that card maybe from the Venezuelan Winter League.

The Concepcion is a Venezualian card. Didn't know you were a Beatles fan. I collect them myself.

So you're saying it was an easy night's day?

By the way, the Newcome was your find o' the day, though the Herman's pretty sweet, too. That guy's lunacy was Rube Waddell-quality stuff...

Killebrew, McCovey, Gossage, AND '50s Bowman? Too much good stuff. More things to add to the want list in my head.

You know if you don't need the 50 Bowman Parnell I know someone that does.

You should email the Medina Historical Society to see if they have any input on the card, or on Ward's Kendall Service. http://www.historicmedina.org/

Here's some more info on Kendall and Kendall memorabilia. Fascinating stuff but nothing about cards I'm afraid. The company put out a lot of advertising memorabilia though. http://www.oldgas.com/shoptalk/ubb/Forum4/HTML/000435.html

Judging by the 3 digit number, it can't be any more recent than 1958, but it's almost definitely pre-WWII.