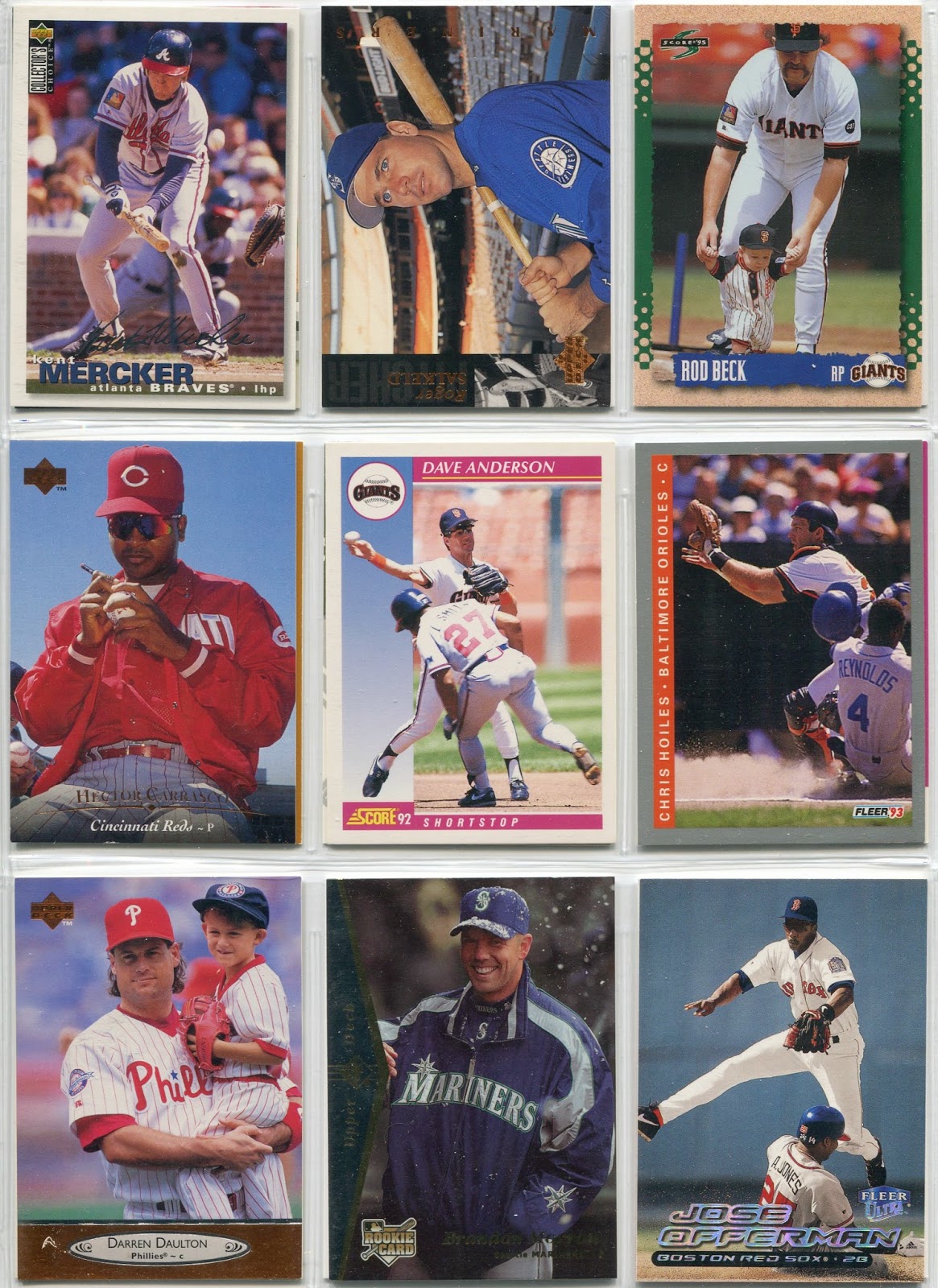 With snow and temperatures in the 20s, though, it's been more like a second winter break thus far. Still, I can't complain. A week off of school is nice no matter how you look at it.

Plus, that means a little more time for cards, of course. I'll be attending a show next Saturday as kind of a grand flourish to my spring break.

I can't wait to see what kind of frankenset hits the dime boxes have in store. I'm sure there will be quite a few, as usual.

With that in mind, let's take a look at the next page in this frankenset binder. 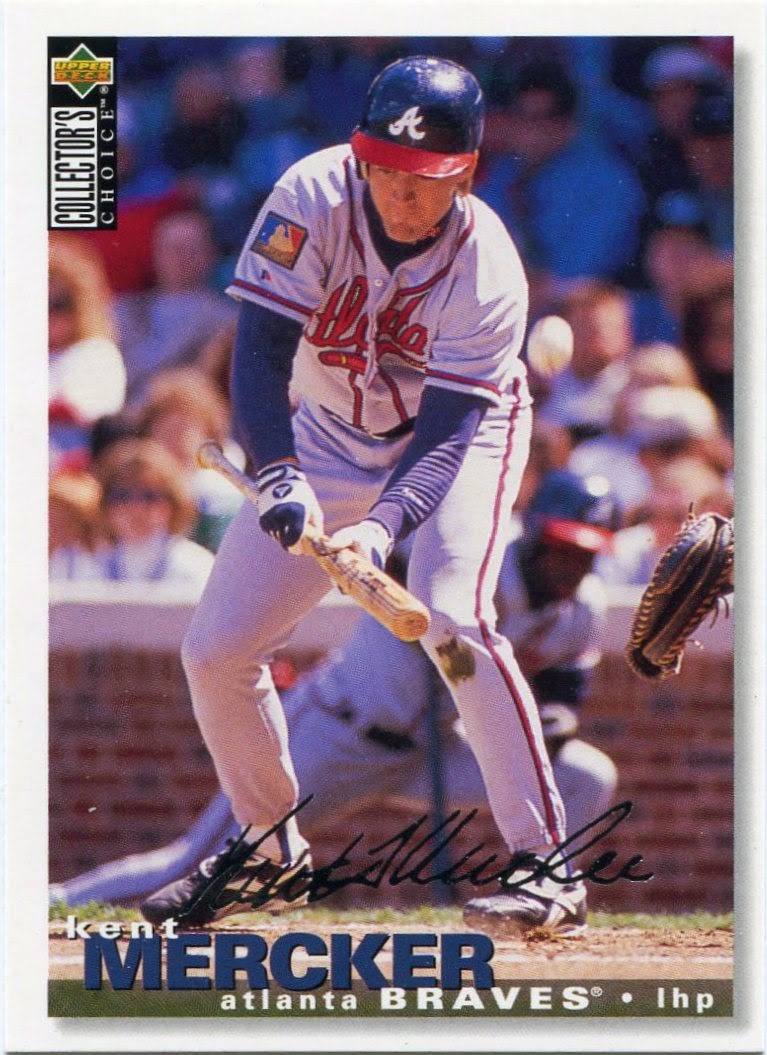 Here's a rarity when it comes to frankensetting.

I have the silver signature parallel of this Kent Mercker "pitcher at the plate" shot, but not the base card. Parallels are welcome in my frankenset, but the base version is what usually makes the binder.

Unless, of course, I don't have the standard base card.

That's the kind of thing that plays tricks with my case of cardboard OCD. 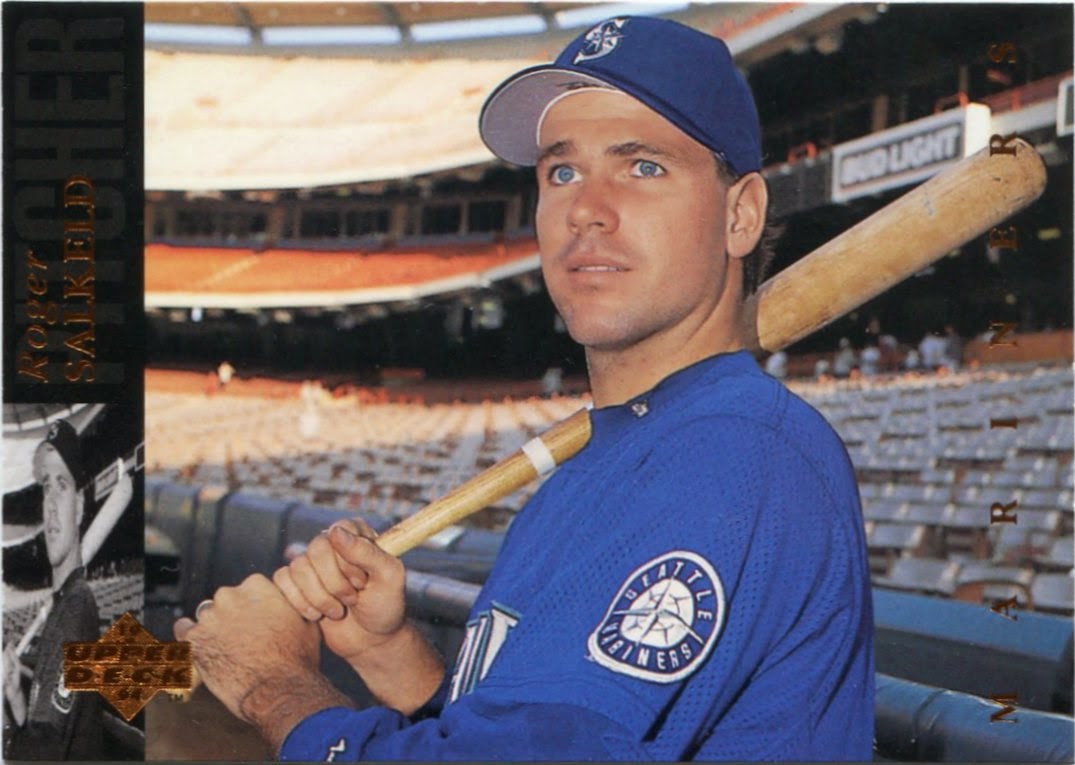 Though posed shots like these don't actually show the pitcher hitting, I still allow them into my "pitchers at the plate" mini-collection.

Seeing as how he pitched in the post-DH/pre-interleague era, it's no surprise that Roger Salkeld never took a single at-bat in his two seasons with the Mariners. (He hit .031 with the 1996 Reds.)

Against all odds, though, a card exists of him with a bat in his hand.

That's the type of quirk that makes me love this hobby all the more. 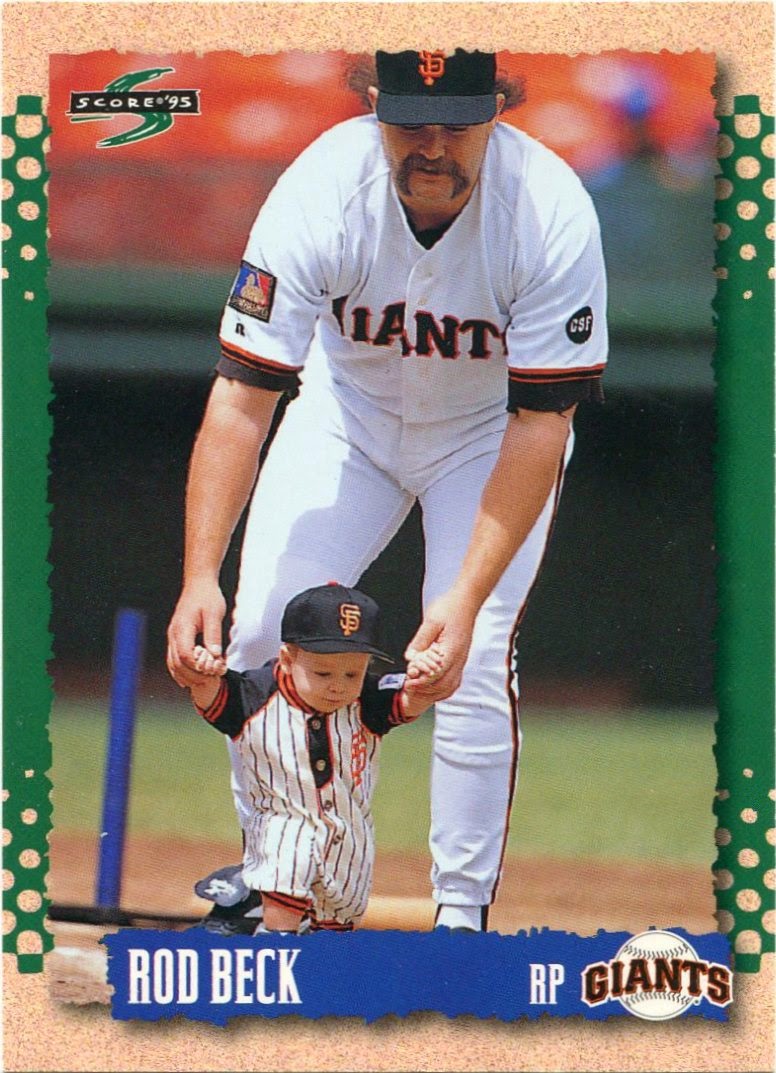 I saw that 1995 Score was recently voted as the biggest bust in the brand's history.

Laugh all you want, but I've always had a great amount of somewhat irrational love for the set. In fact, I was one of the two people who voted on 1994-95 as the biggest improvement in Score's history. (I'd like to know who my one fellow '95 Score comrade is.)

I can see why people dislike the dirt-themed borders and somewhat loud design, but I've always had a soft spot for these cards. As evidenced by this cute "cards with kids" shot, the photography is among Score's finest.

It's far from a bust to me. 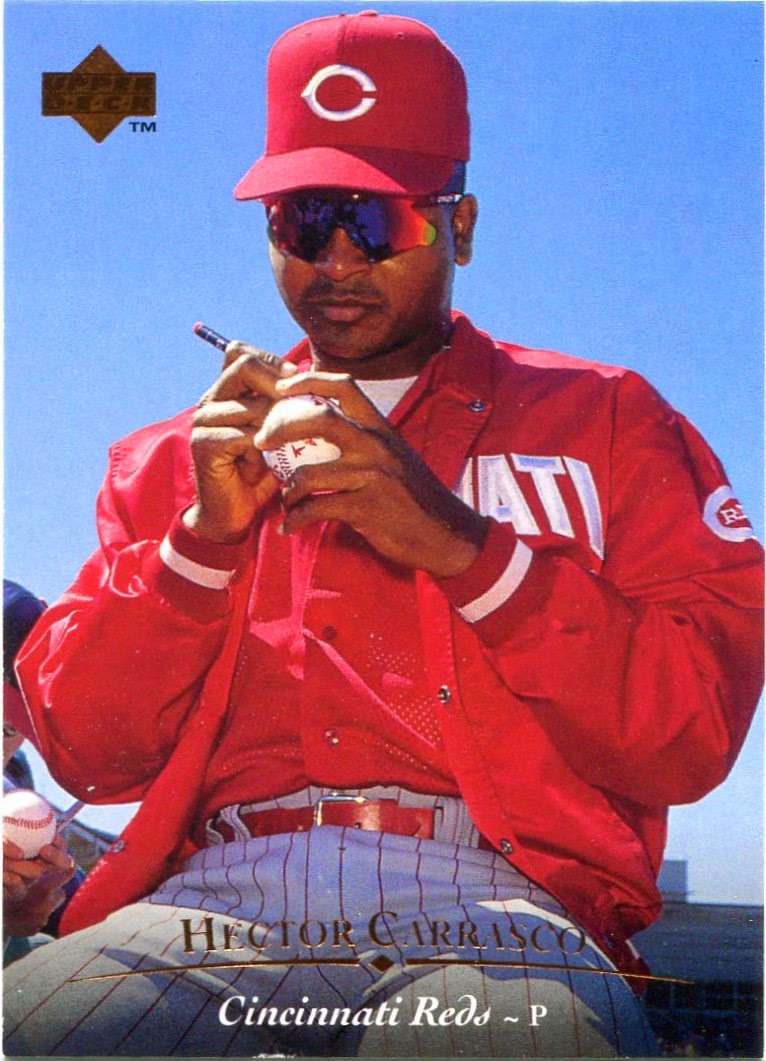 I never used to like 1995 Upper Deck, but I've really started to come around on it lately. 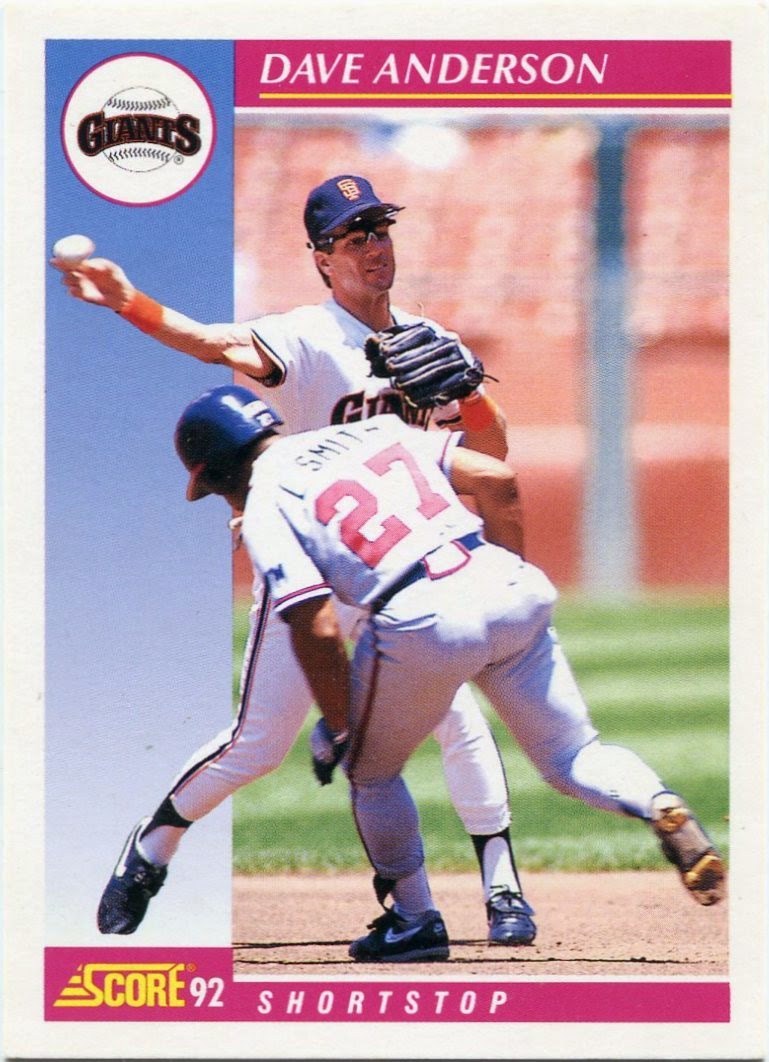 Slowly but surely, I've started to warm up on the design. I like the cards like this one that extend out of the frame. It almost gives off sort of a 3-D feel.

The main reason Mr. Anderson made the frankenset, however, is the fact that I honestly can't figure out what is going on in this shot.

Because Anderson is throwing over former Brave Lonnie Smith, I initially thought it was a "double dip". With second base nowhere in sight, though, I don't think that's the case.

Smith doesn't appear to be in any sort of hurry to get out of the way of the throw, and I can't tell whether Anderson is trying to get an out at first or second base.

This whole card is a mystery. 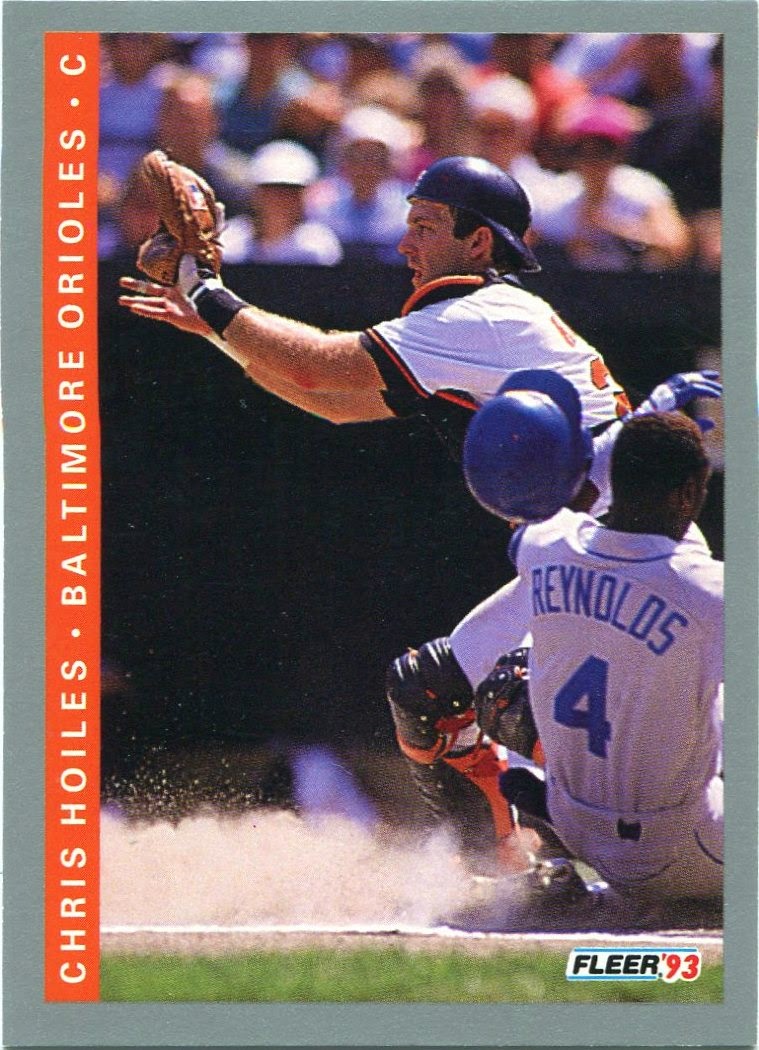 It's the second straight page to feature a PATP from Mr. Hoiles. 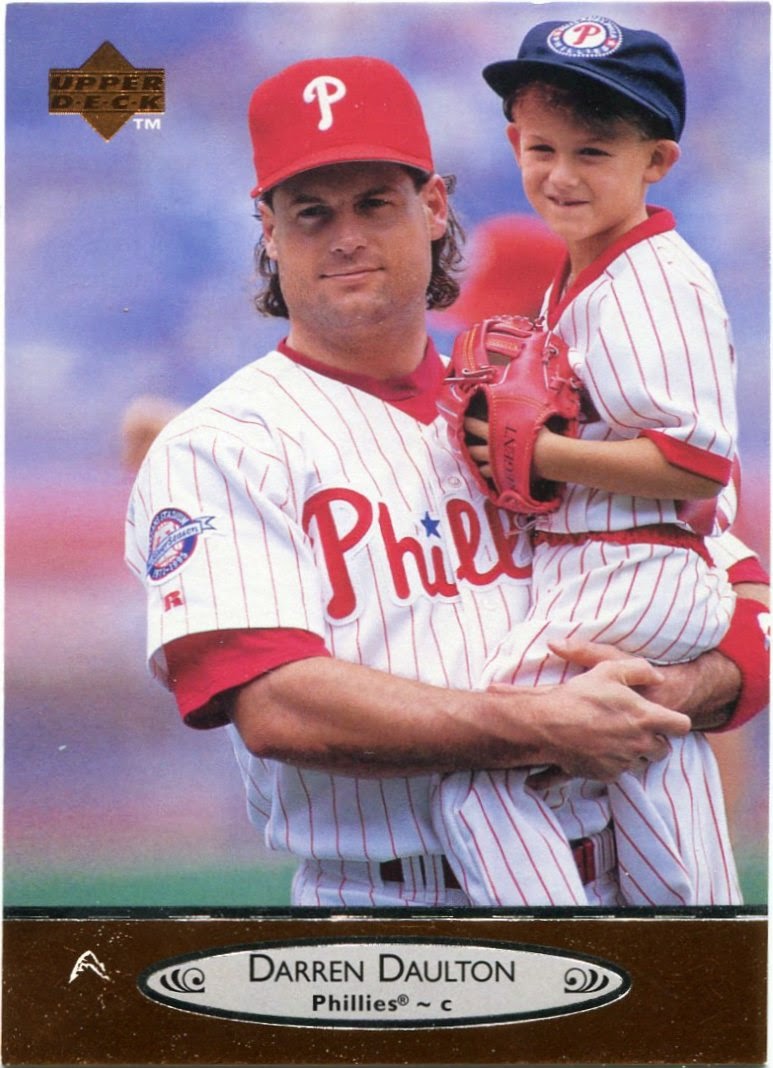 If I had to rank all of Upper Deck's efforts, 1996 would probably come in near the bottom.

Though it does include a decent amount of nice photography, I never much cared for the design.

Still, that all goes by the wayside when it comes to great "cards with kids" shots like this one. 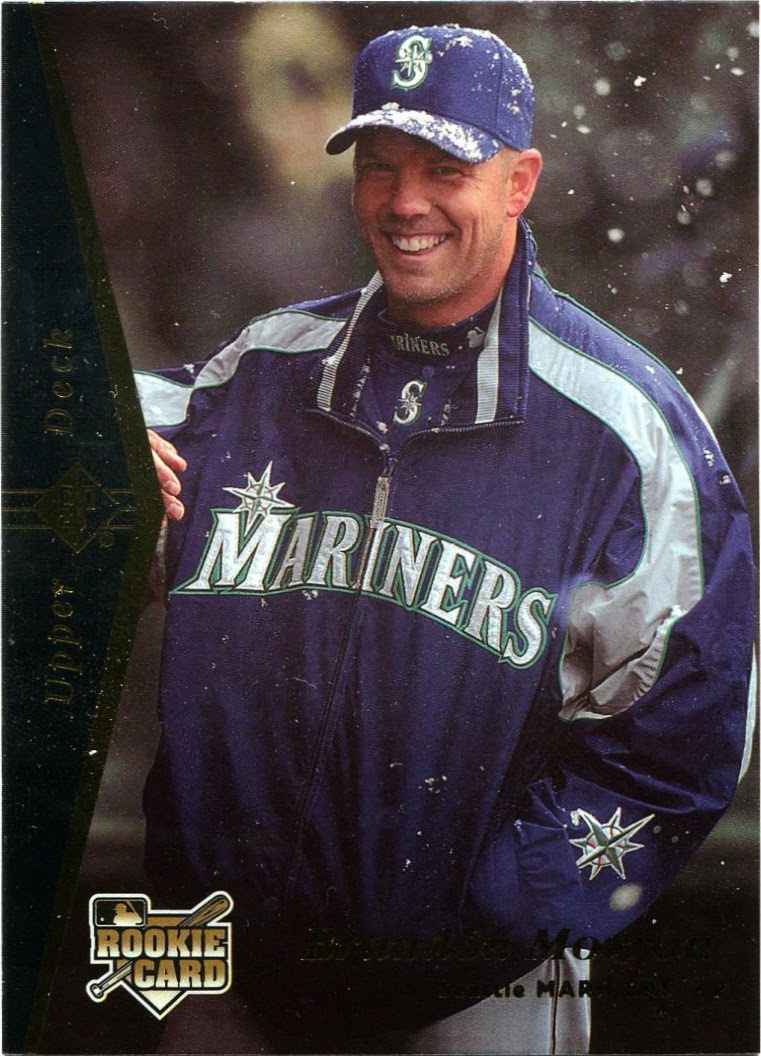 Does anyone actually remember 2007 SP Rookie Edition these days?

I sure don't. Though I may have picked up a pack or two, I can't recall these things ever being on the shelves. I've found an ample amount in dime boxes over the years, this Morrow included.

I can probably count all the snow-themed cards I own on one hand, which makes this a personal favorite of mine.

Maybe Rookie Edition was good for something. 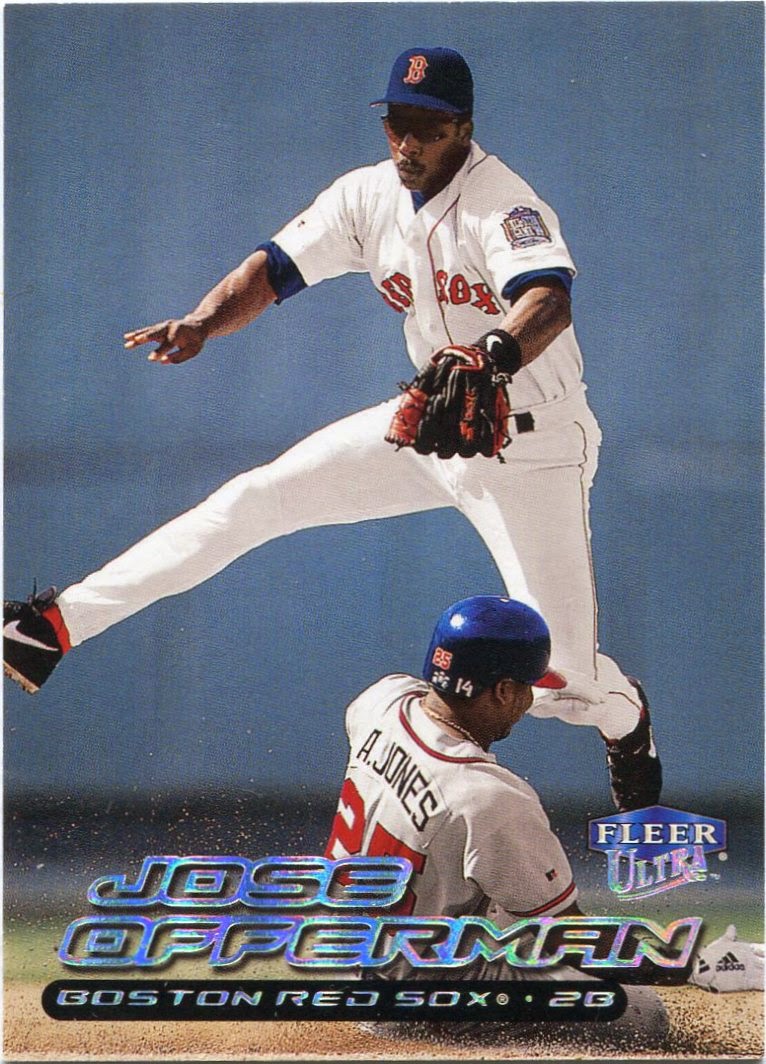 We close out today's frankenset with a terrific "double dip" card.

One of these days, I'm going to have to go through my collection and find some of the best "cameo" cards.

I smell a future post idea there.
Posted by Nick at 4:46 PM

I'm on Spring Break as well and sadly it's coming to a close. Glad to see the Frankenset coming along nicely!!

There needs to be a "cards with kids" database, my collection needs to be more than just one page.

Either way, I love this feature! Viva Frankenset!

I'm not with you on '95 Fleer, but I'm on board with '95 Score. It's another one of those sets from that era that I should dislike in theory, but like in practice.

i count the 92 score anderson as a double play card.