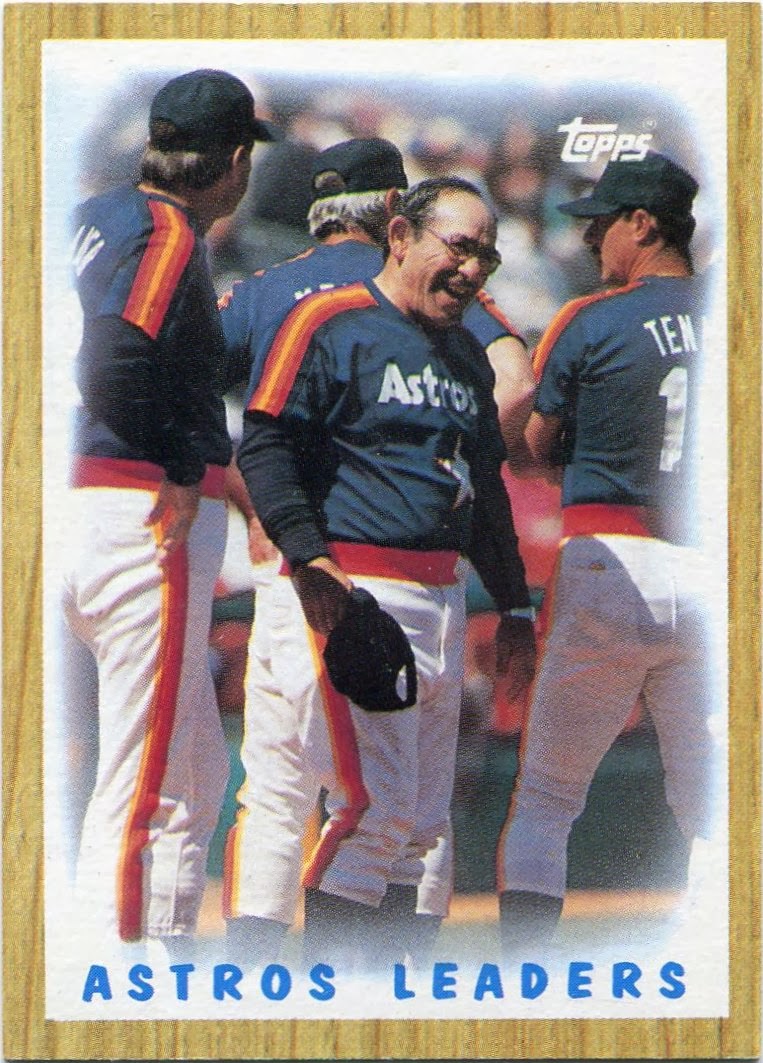 When I started this blog, I wasn't sure where it would take me.

I didn't know whether I even wanted to maintain a blog in the first place. I very nearly hung up my cleats after a week or two during those early days.

As you know, though, I stuck with it. And I'm eternally grateful that I did. As I've said over and over again, this blog as allowed me to collect with a great and fun group of collectors that I never knew existed in the first place.

After years in the somewhat archaic world of trading forums, this blog gave me hope.

On top of that, though, I think it has really allowed me to come into my own as a writer. Some of my earlier posts are shaky, to say the least. I cringe a bit when I go back and read those sometimes.

I'm far from the world's greatest writer these days, but I think blogging has had an unexpected benefit in that regard. I've always enjoyed writing, but I don't know that I would've described it as a passion before I started this blog.

It's become such a big part of my life, in fact, that I've recently given some thought to pursuing a future career in writing. I'm still trying to make it as a teacher, but doing a little writing on the side is something that I certainly find intriguing.

Without this blog, I wouldn't even be considering a career in writing right now. 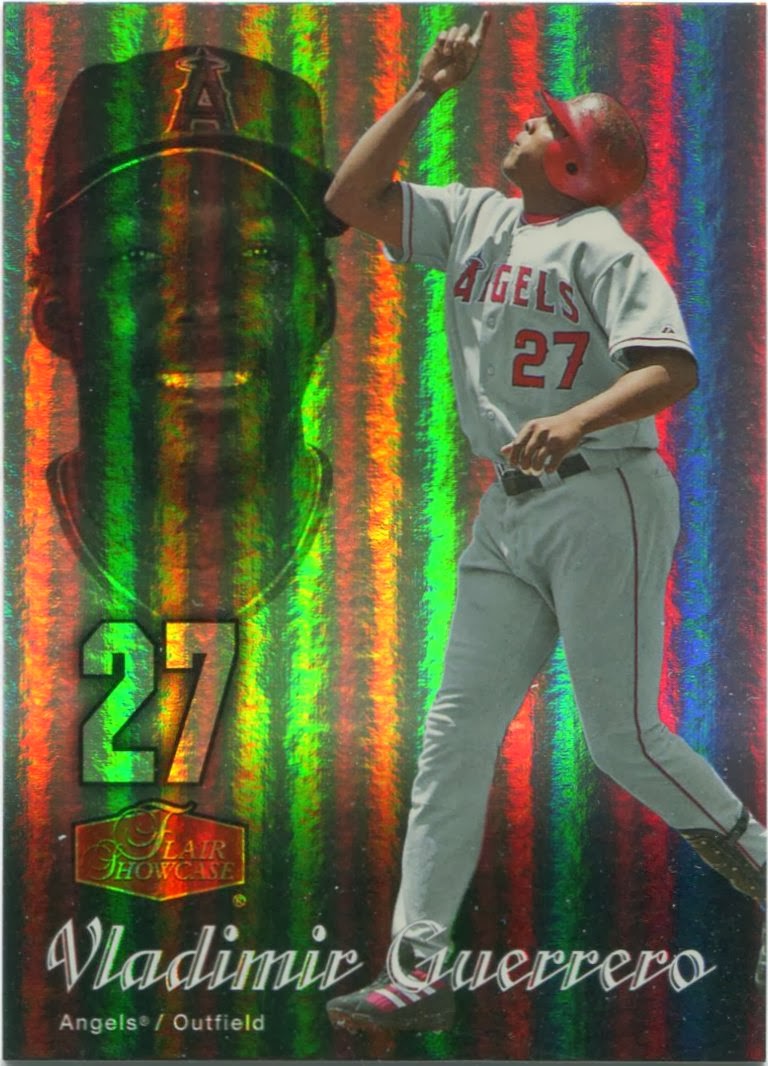 Okay, okay. Writing aspirations aside, this is a simple baseball card blog, after all. Tonight's assortment of cardboard comes from someone who played a major role in me becoming a full-time blogger.

I'm talking, of course, about the ever-generous William of the terrific blog "Foul Bunt". As I've said time and time again, he was basically the first person that showed just how giving and kind the people in this community are.

Though I've known him for over two years now, William continues to shower me with great and unexpected trade packages on a regular basis. The cards you'll see in this post are actually a compilation from three mailers he's sent me lately.

The first package included the awkwardly awesome '87 Topps Leaders issue at the top of this post. How I didn't already own a copy is beyond me. It's the only card I've ever seen that features Yogi Berra and his tenure as bench coach with the Astros.

Maybe it's just me, but something about those rainbow sleeves don't look right on such an old-timer like Yogi.

I know any package from William is good for a new Vlad or two for my collection.

Uber-shiny ones are purely a bonus. 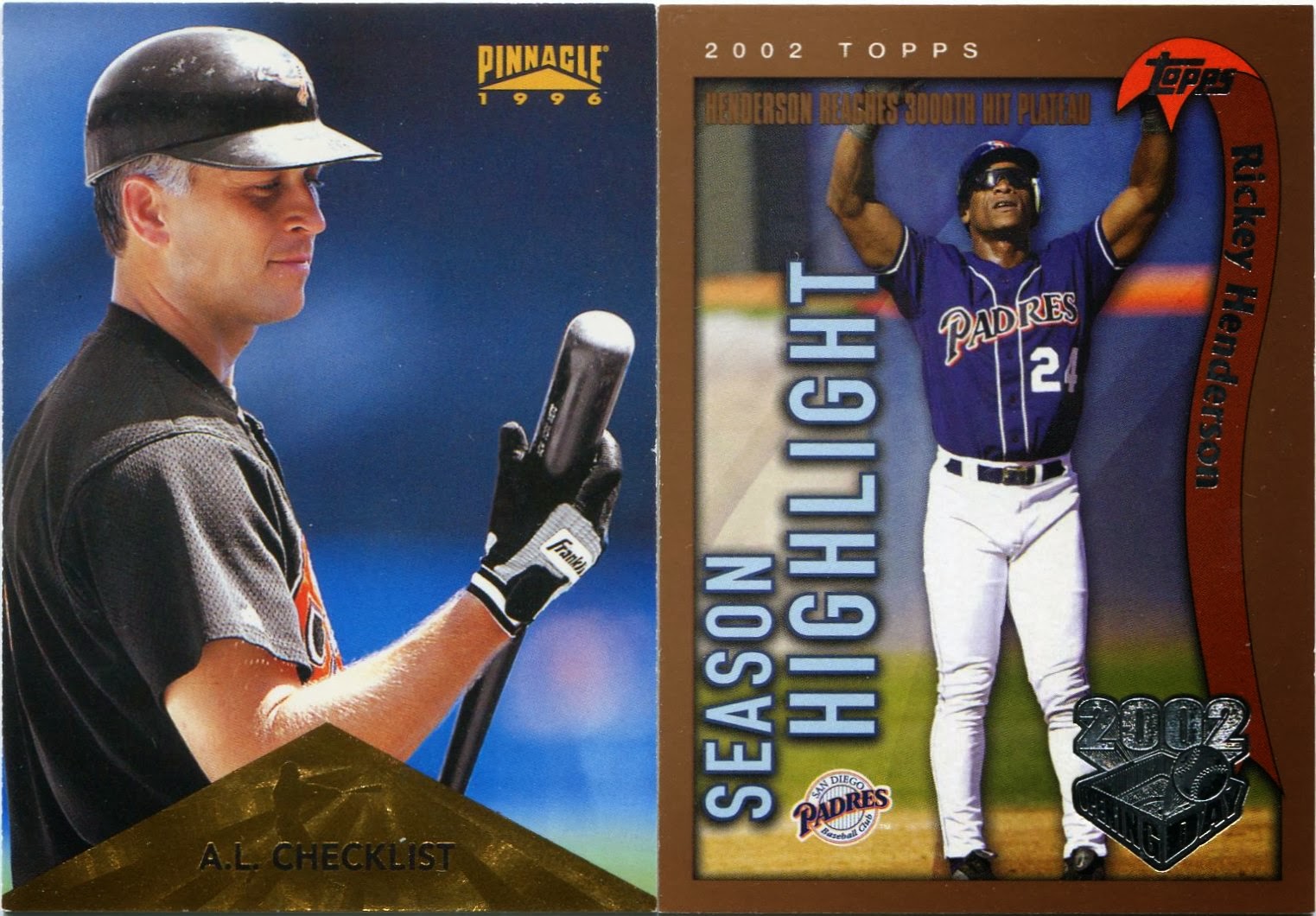 William knows his way around the wide world of random as well.

For anyone who cares, the Ripken isn't an official "bat barrel" card. I usually prefer the bat to be pointing directly at the camera lens, as opposed to the rather candid shot on that one.

Still, that doesn't take anything away from its beauty. 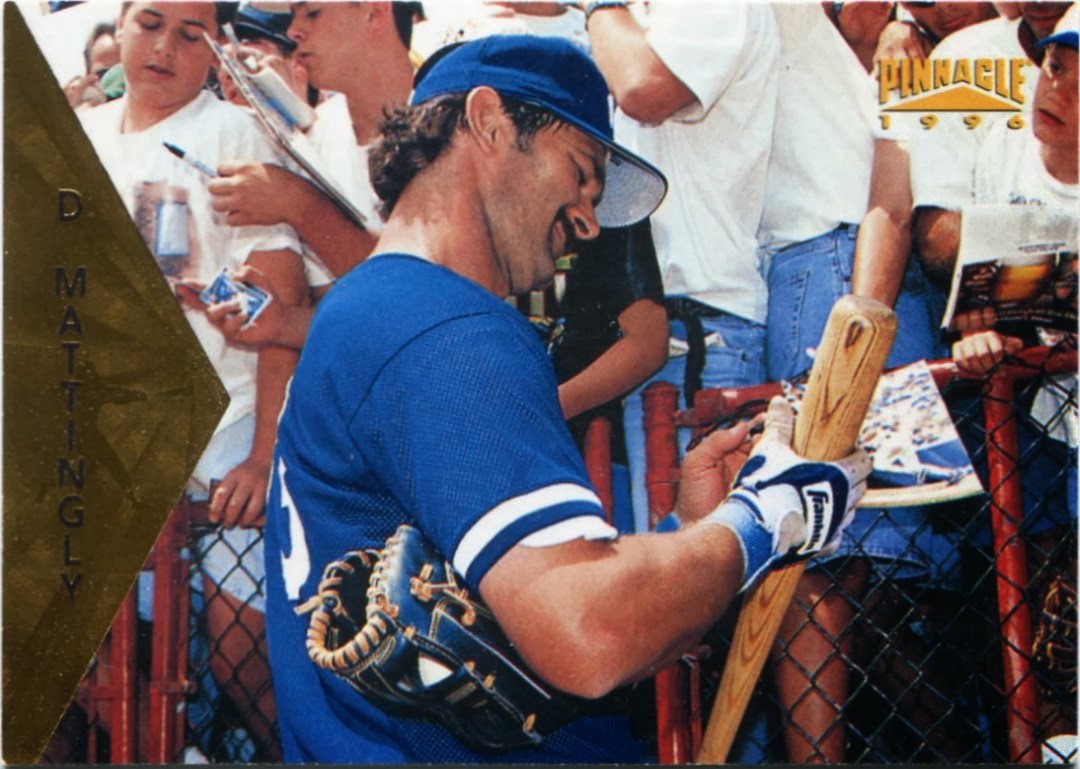 Here's a nice "autograph" shot of none other than Don Mattingly.

It comes courtesy of, you guessed it, Pinnacle.

The "mountain of gold" on the brand's 1996 design may not have been all that satisfying, but the photography is on par with everything else from its legendary history.

As if that weren't enough, this is also Donnie Baseball's "sunset" card.

Pinnacle sure sent him out on top. 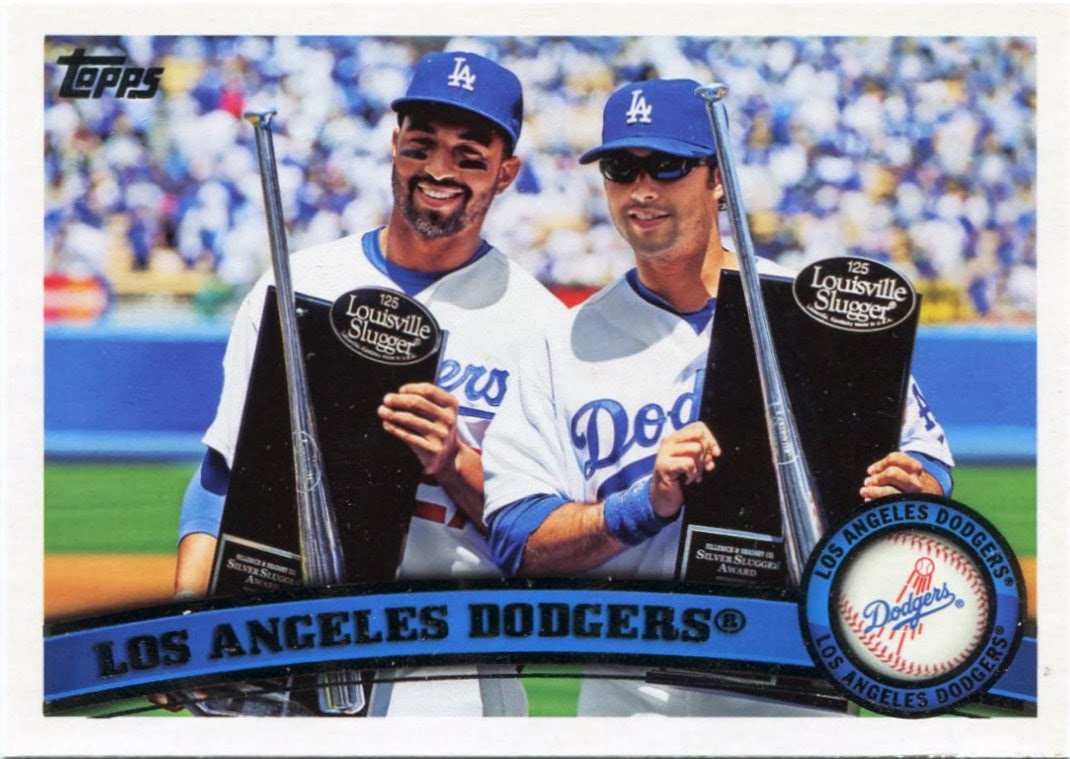 Mini-collection hits were aplenty in William's batch of trade packages.

On this magnificent piece, you get not one, but two awards. 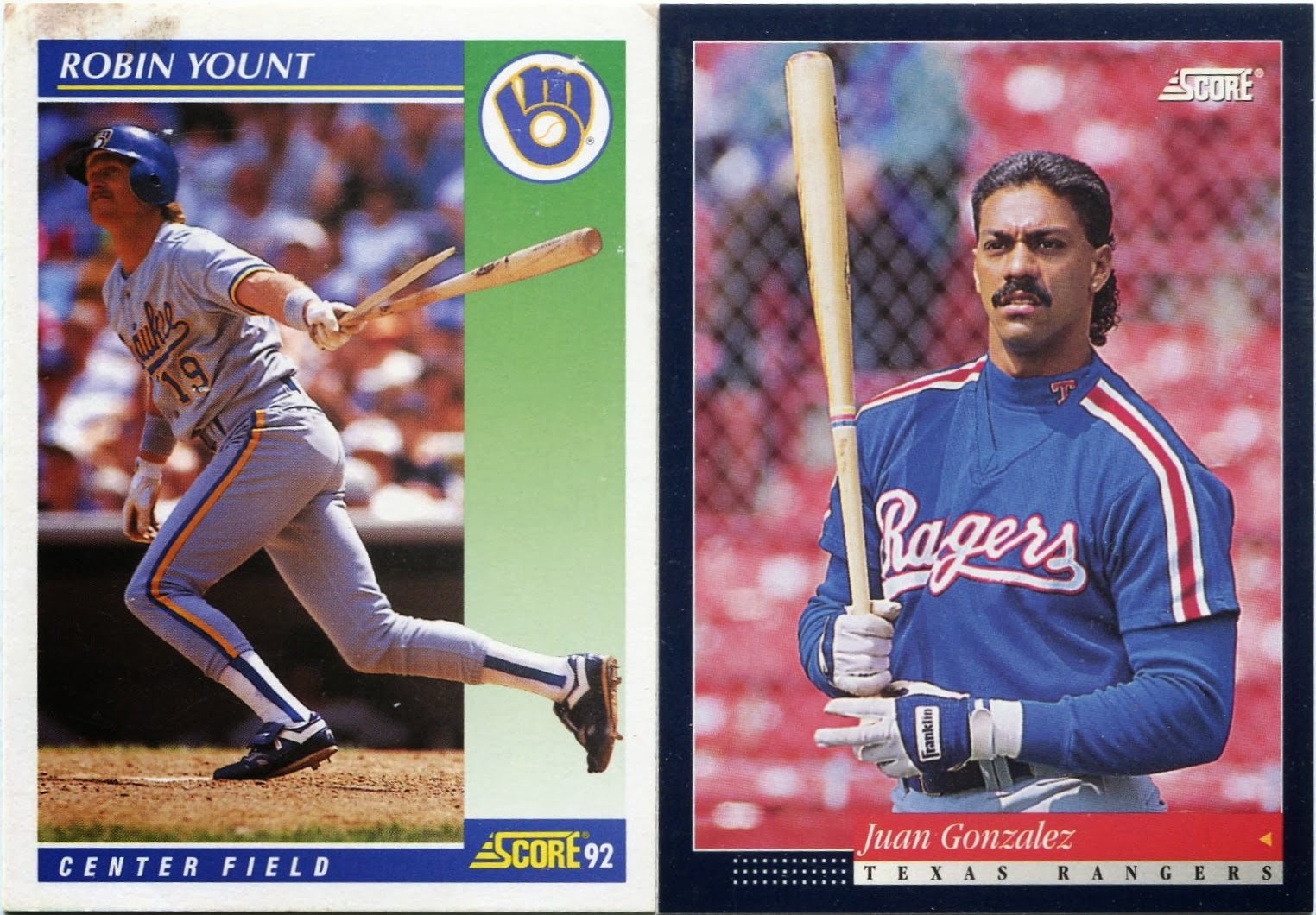 Other people might think I'm crazy, but I'm starting to believe that 1992 Score really wasn't that bad of a set.

The design might not be all that great, but the photography makes up for it in a lot of cases. That "broken bat" Yount included.

While I might be waffling a bit on '92 Score, I'm certain of this. That is one ugly hairstyle on Mr. Gonzalez there.

I wouldn't be surprised if his entire 1994 salary went towards hair gel. 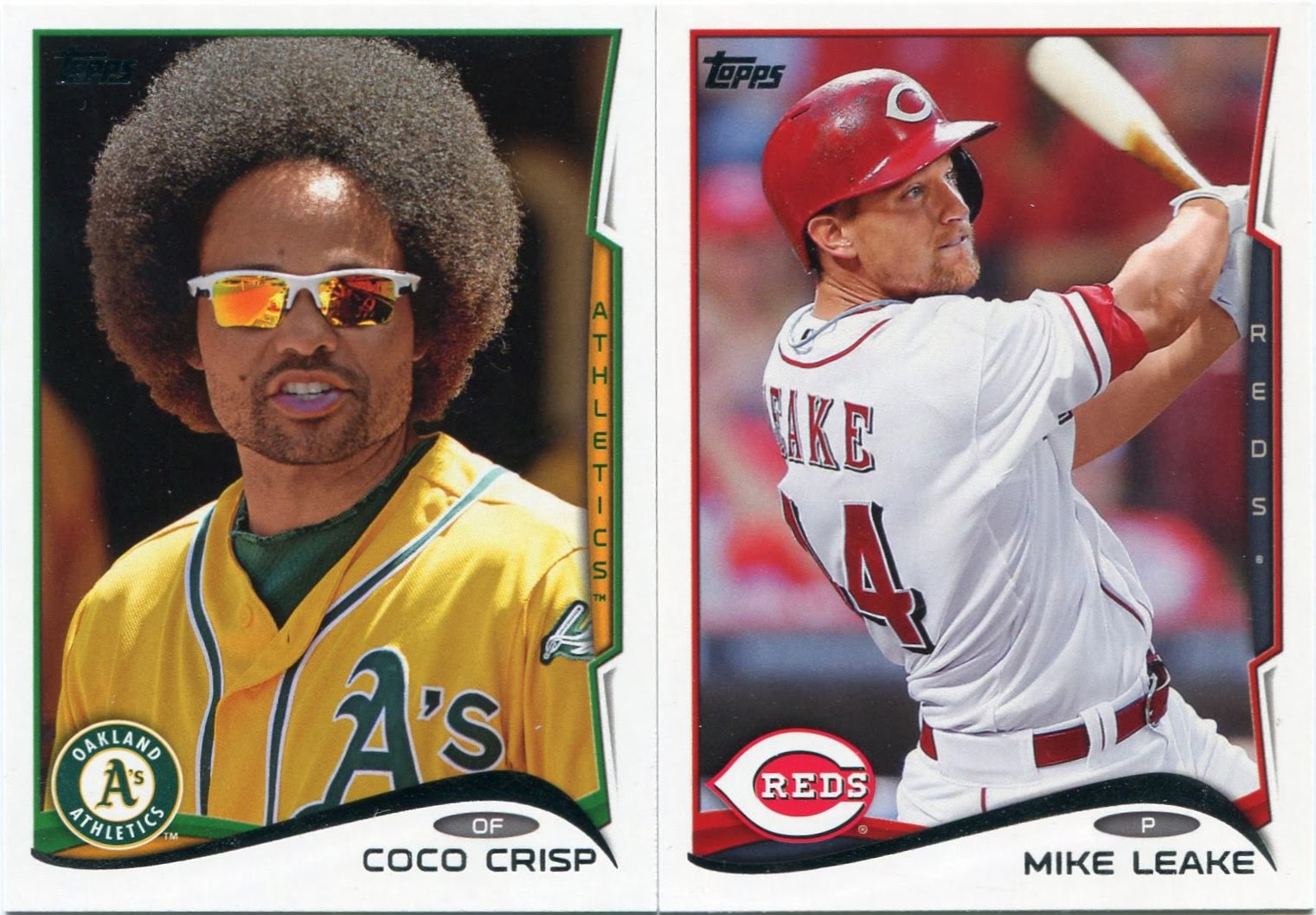 ...William sent me the single most desired need of mine from 2014 Topps with the Crisp.

A couple other people have since sent me copies, but William was the first. I guess he just knew that I'd want such a sweet 'fro card. When I first caught wind of it, I thought it had to be some type of super-duper-short-print. Kudos to Topps for making such an awesome card part of their base checklist.

That thing rivals Oscar Gamble. I'm not out of line for saying that, am I?

The Leake, on the other hand, is one of the better-kept secrets from 2014 Topps. I didn't even know it existed until a few weeks after the set's release. Anyone who knows my collecting interests probably understand why I think it's so special. But I'll spell it out for you just in case.

PITCHER AT THE PLATE!!!!

I honestly can't remember the last time Topps featured one of those in their Flagship checklist. I was starting to think they'd become a thing of the past.

I'm glad to see they're still around. 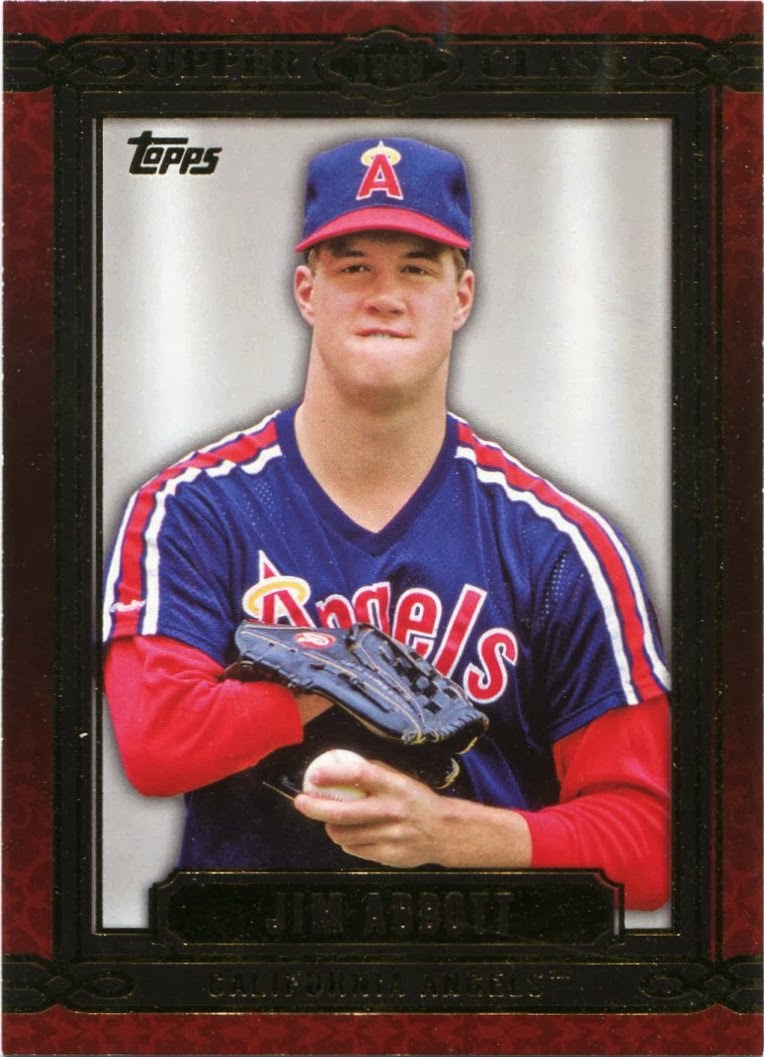 Knowing my admiration for Jim Abbott, William decided to slip this one into the second of the three packages he sent along.

I couldn't be more thankful for that. The excitement of landing a new card of Mr. Abbott is nearly unrivaled when it comes to my collection.

This great piece comes from the "Upper Class" insert series from 2014 Topps, another design I've started to come around on lately.

I don't know if my appreciation for Jim Abbott can be conveyed through words.

That aside, though, this whole writing thing has really started to gain more steam with me lately. The more I consider it, the more I'm drawn to it.

At the very least, it's something I can do to supplement my hopeful future career in education.

After all is said and done, though, I'll always have this blog.

You've got the chops to write, no doubt. The problem is that doing it for a living requires (at least initially) to write stuff that other people want you to write. Teaching is an honorable career, to say the least. Teach and write on the side until your first best-seller makes you independently wealthy. That's my prescription.

BTW, I recently picked up the '92 Score set and I couldn't agree more. The design makes for some tedium, but I've been surprised as I slowly look through the set at the quality of the photography. The design has done much to obscure the goodness over the years.

Nick, you're a terrific writer. I always enjoy sending you cards and I plan on continuing. My first thought when I saw the Berra was pretty much the same as yours, except that I've had this 5,000 count box of 1987 Topps here for almost 10 years and never knew that card existed, let alone that I had 6 copies of it. I sent one to you and two to Drew (one for him, one for his dad). I'm really happy you liked the stuff. Thanks again for the kind words.